Ireland, a country that is located on the island of the same name in the Atlantic Ocean. It is a place of Celtic culture and Viking stories. It’s worth noting that Ireland is an independent state, since another country, Northern Ireland, which is part of the Kingdom of Great Britain, is next door. Despite this, there are no clear boundaries between the states. For example, the street can smoothly pass from one country to another, and no one maintains any control. Ireland is not considered a popular country among tourists, but the fact that there are interesting sights. There are interesting places that are even under the supervision of UNESCO.

Newgrange, a Neolithic tomb located in the Boyne Valley. It is one of the most important tombs in Europe, the origin of which remains a mystery. Newgrange looks a bit like an artificial hill, but it is one of the best examples of so-called corridor tombs in Europe. Newgrange and other megalithic monuments (Knout and Dout) in the Boyne Valley are on the UNESCO World Heritage List.

Newgrange Megalithic Mound is about 75 m long and 13 m high. On the day of the winter solstice the sun’s rays penetrate through a ledge (a unique element of Newgrange) and a narrow tunnel into the tomb. The tunnel is 19 m long, and at the end is a circular vaulted hall, which is about 4000 years old. Thus Newgrange, the most memorable solar observatory in the world. The vault of the tomb chamber reaches a height of 6 meters, preserved in its original form. The layers of stones, which gradually turn half the length of the wall, form a conical cavity topped by a cover stone. The base of the mound is surrounded by 97 stones. Around the tomb are 12 large stones which form a protective circle. 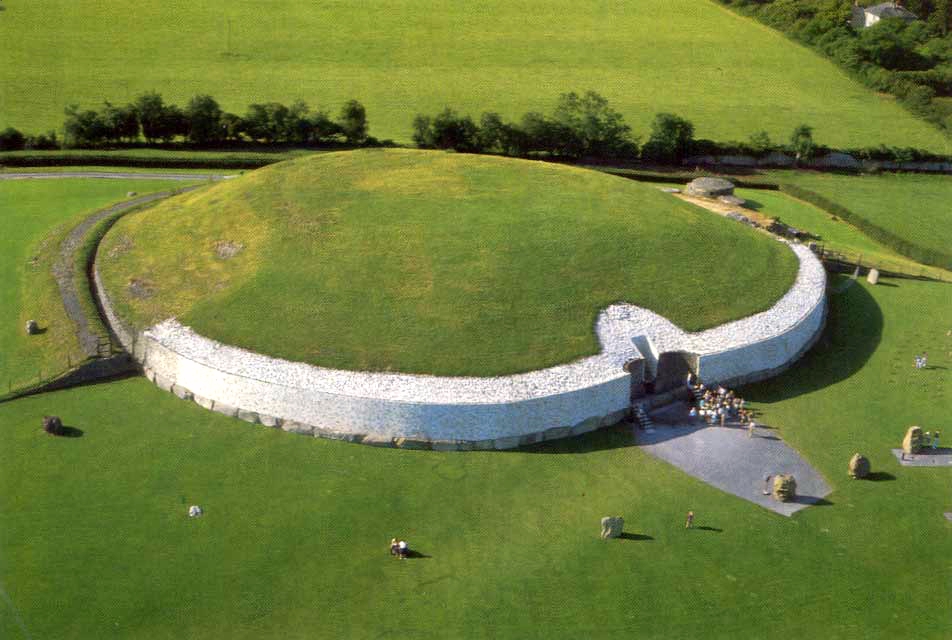 The tomb was built about 3200 BC and remained untouched until 1699, when it was rediscovered. Newgrange is even older than the famous Stonehenge and the Egyptian pyramids. Only the central part of the original mound survives. The rest of the mound is a reconstruction of the original material (scattered boulders) that was around the tomb.

Newgrange can only be accessed through the Bru Tourist Center at the Boyne Tourist Center, located on the south bank of the Boyne River. The visitor center features an exhibit that includes, among other things, a replica of the chamber at Newgrange and a model of one of the smaller mounds at Knott. All tours begin with a visit to the exhibit in the information center. Visitors then cross the river from where buses take them to the megalithic monuments. The number of visitors to the megalith is strictly limited, no more than 700 per day.

The most famous Irish portal dolmen , whose structure consists of a stone boulder supported by two erected stones. The dolmen is located on the Burren Plateau in the northwest of County Clare and is the oldest megalithic monument in Ireland. The vast karst plateau of the Burren offers spectacular views of the amazing landscape. There are about one hundred and seventy dolmens in Ireland, but Pulnabrone is by far the most photographed. In the midst of a stone landscape with no signs of life, it is visited by about two hundred thousand tourists each year. 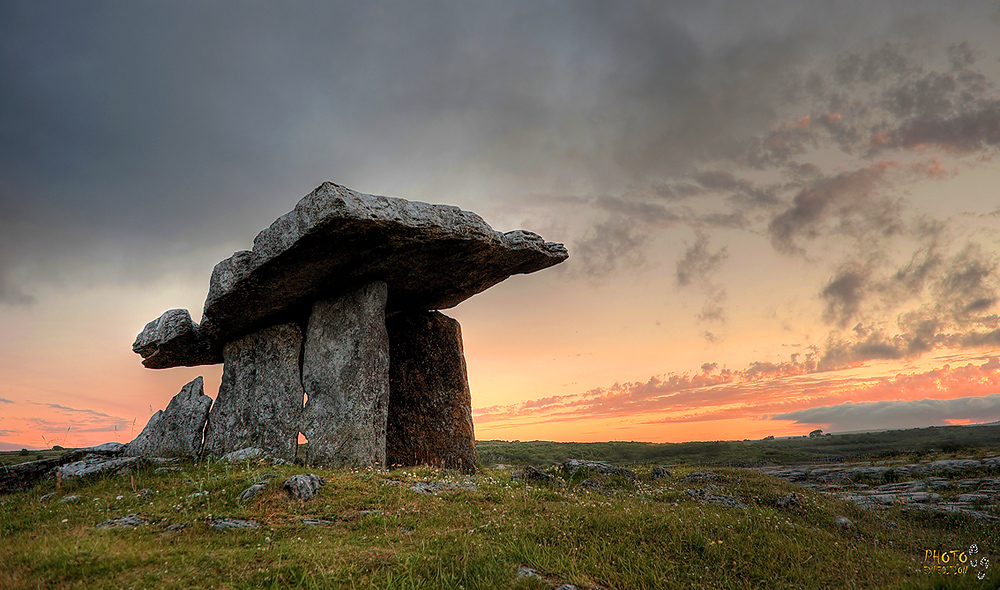 “The pit of sorrow,” as the name of this place is sometimes misinterpreted, was once a portal tomb, and its eastern entrance formed this well-preserved dolmen . Its height is 1.8 meters, and the upper slab, supported by two boulders, weighs five tons at 2 3 meters. Originally, like the rest of the tomb, it was covered in clay, so the total height of the structure was nine meters.

Powerscourt Manor, the most famous Irish manor house located just 20 kilometers from Dublin in County Wicklow. Covering around 20 hectares, Powerscourt has beautifully landscaped gardens and a park with an 18th century castle in the middle. It was built by Richard Wingfield, first Viscount Powerscourt, on the site of a 13th century medieval castle which was rebuilt in the Palladian style between 1730 and 1741 by Richard Cassels. The castle burned down in 1974. In 1996, the house was roofed again, and a year later it was opened to the public. The first floor of the castle has been partially renovated and there is a cafe and several stores.

The local gardens are considered some of the most beautiful in Ireland. In 1858-75. The Seventh Viscount Powerscourt established new ornamental gardens in which he placed gates, statues and vases he collected during his travels in Europe. Attractions in the garden include Tower Valley with its stone tower, Japanese gardens, a pegasus statue, Lake Triton, an animal cemetery, a dolphin pond and an Italian garden. 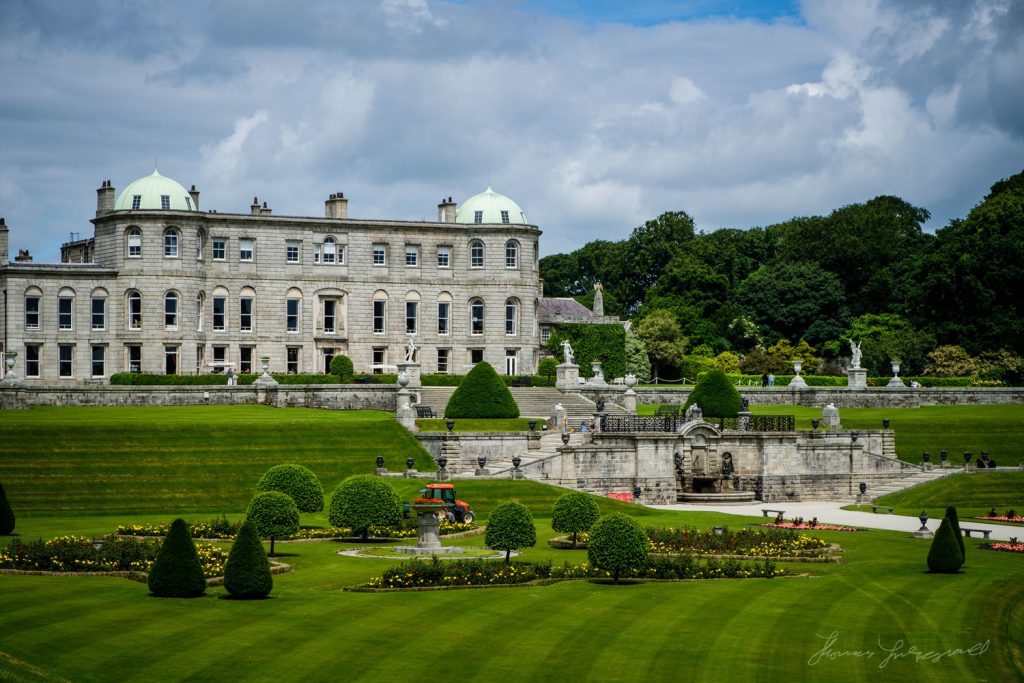 It is also worth visiting Powerscourt Falls, located about 5 km south of the castle. The height of the waterfall is 121 meters, which is the highest in Ireland. There is an interesting story connected with the waterfall. In August 1821, Richard Wingfield, the 5th Viscount of Powerscourt, was preparing for the expected visit of King George IV of England. His efforts were to collect enough water to be released when King and George IV visited, so that he could admire the Falls in all their power and beauty. The king, however, stayed for the banquet and did not visit the waterfall. This turned out to be a huge stroke of luck, because after the water was drained from the “dam,” the specially built viewing platform where George IV had been was swept away by the mass of water.

READ
Top 10 Best Places to Raft in the USA

The Ring of Kerry, the name of a traditional 179 km journey around the Iveragh Peninsula in southwestern Ireland. Traveling along this road, visitors can enjoy spectacular mountain and coastal scenery with many interesting places to stay soon, such as the Mall Gorge.

The trail, overgrown in many places with colorful rhododendrons, leads around medieval romantic castles, old monasteries, stone round tombs, beautiful gardens, in addition you can see the so-called Ogana Stones. Everything is surrounded by green hills and rocky peaks. Killarney National Park, at the foot of Ireland’s highest mountain, the McGillicuddy Rix, is often described as “the crown jewel of Kerry”. 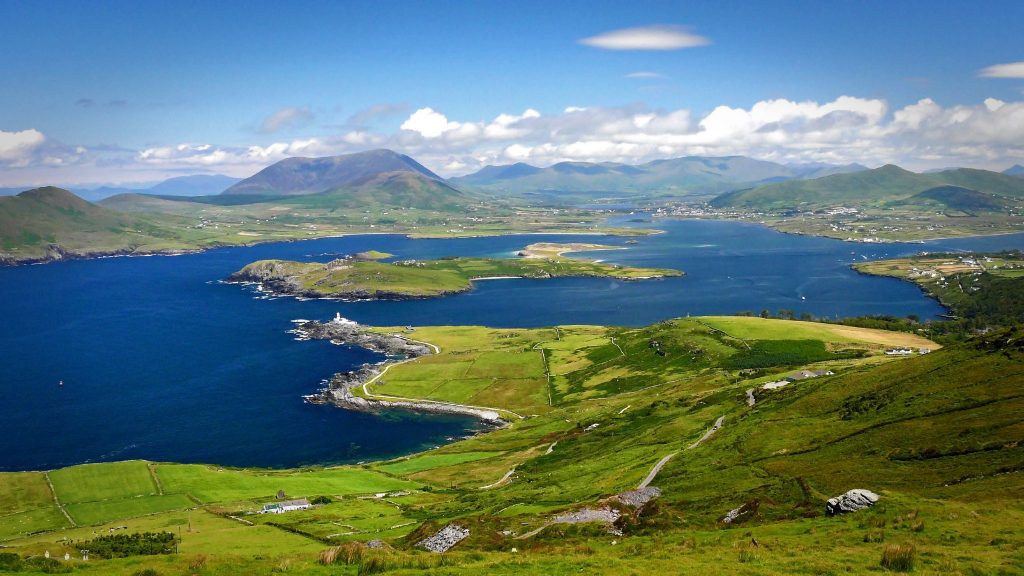 The Ring of Kerry

It is a journey that has attracted visitors for hundreds of years. Among the most popular, Macross House on Lake Tudor, built in 19th-century Tudor style from the plan of Scottish architect William Burns, the Abbey ruins on Innisfallen Island , one of the largest stone forts in Staigue, Derrynane House, home of Daniel O’Connell, known for his desire to equalize Catholics in Ireland, and the magical Dunlo Strait, offering unforgettable views.

In 2016, a new bike path was paved around the peninsula. Although extreme performance enthusiasts can traverse it 172 kilometers in one day, most visitors spread the road over three days to truly enjoy the surrounding beauty. However, everyone should be prepared for difficult climbs and steep turns, as the journey is not really the easiest. Those going to Ring of Kerry can also take advantage of the golf courses, go kayaking, and use one of the cliffs for climbing. However, no one should leave without sampling local delicacies, such as chocolate with sea salt crystals.