The directory contains the main sights of France with photos and descriptions, names in French and Russian, location map. From the article you will learn what to see in Paris in the first place and where it is worth to visit outside of it, where to go on vacation with children.

France is consistently the most visited country in the world. Most travelers flock to Paris, which holds the tourist lead among capitals, while the Eiffel Tower, the unshakable symbol of France, remains the world’s most popular attraction.

Travelers dream to visit the Mont Saint-Michel Abbey, French castles and palaces, see the best works of art in museums in Paris and major cities, walk through the legendary historic squares and streets.

No one will be left indifferent parks and gardens, ideal in terms of landscaping. A real work of art – the garden of Versailles, the former summer residence of French kings.

The most interesting attractions for children in France are amusement parks. The center of attraction, a dream park – Disneyland Paris: to see the fabulous Castle of Sleeping Beauty and a parade of Disney cartoon characters, a ride on the dizzying attractions dream even of many adults.

Second place in popularity is occupied by the theme park Asterix, created based on famous French comic books and cartoons. Park Futuroscope in Poitiers is devoted exclusively to virtual rides, and for walks and family vacations suit the park “France in miniature”.

What to see in France

The Eiffel Tower (Tour Eiffel) is one of the most famous sights in the world. It is called the object.

Disneyland Paris is a grandiose complex of amusement parks with a total area of 1943 hectares.

No museum in the world can compare in popularity with the Louvre, which annually visit about 10 .

Arc de Triomphe is a true symbol of Paris and the history of France. It is located on the Place Charles de Gaulle (also called.

The Paris Grand Opera, located in the Palais Garnier, is considered one of the most famous in the world. Connoisseurs.

Montmartre is one of the most picturesque areas of Paris, which is located in the north and is the 18th municipal district of the capital.

Cabaret Moulin Rouge is considered one of the most famous attractions in Paris. Fairy show.

Le Lido is one of the most unique and famous cabaret not only in Paris, but also in the world. For all lovers.

Sightseeing in France on the map

Paris – the city of lovers, famous all over the world, where the most famous attractions of France are concentrated.

It is impossible to visit Paris and not see the magnificent Catholic Cathedral of Notre Dame, the protagonist of the novel of the same name by Hugo. At the observation deck of Notre Dame de Paris you can see the gargoyles up close and take a panoramic photo of the city from a height of 45 meters.

The Champs-Elysées and the Arc de Triomphe, iconic landmarks of France, are included in the main walking route through the capital. Parades and celebrations are held here, and the most luxurious restaurants and brand stores are located not far from the walking area.

Palme d’être among Parisian museums belongs to the Louvre, all expositions of which are difficult to cover even for one day. To visit not only the Louvre, but also several thematic exhibitions, it makes sense to buy a Paris Museum Card, which gives the right to visit more than 60 museums.

Exciting and eerie would be a walk through the catacombs of Paris – a vast network of tunnels under the city, part of which are buried. A kind of way to see “another Paris”, where romance has no place.

A popular suburban route – a trip to the castles of the Loire, most of which were built in the Middle Ages, are well preserved along with all the structures and now work as museums.

If the purpose of your trip is exactly the capital, see a detailed list of attractions of France in Paris.

Panoramic view of the Eiffel Tower in Paris from Airpano.com

France is not just about Paris and the Western Alps. The sights of Provence, Brittany, Alsace, Normandy and other regions are no less interesting, where it is worth visiting not only the major cities, but also historical villages against a backdrop of enchanting landscapes and fragrant herbs.

A fashionable resort city, the pearl of the azure coast, Nice attracts tourists not only with beaches and entertainment, leisurely strolls along the Promenade des Anglais. There are the Chagall and Matisse Museums, the Archaeological Museum dedicated to antique artifacts, the park exhibition of primitive art. And to see all the cathedrals, castles and palaces of Nice would take a few days.

The largest port on the Mediterranean Sea, an elegant and multi-faceted French city – this is how Marseille welcomes foreigners. Excursion routes lead to the Cathedral and Notre Dame de la Garde Basilica, the Abbey of Saint Victor, the beautiful palace Lonçon, the castle of If – the one from the novel by Dumas. Walking along the promenade, you can see the famous statue of David – or rather, a marble copy of the masterpiece created by Michelangelo.

Panorama of Marseille from the height of Notre Dame de la Garde Basilica: the city and the If Castle © Elena Eliakova

Lyon has always been and remains a city of vibrant club and cultural life, interesting museums and lush green parks. The historical sites of Lyon are concentrated in the Old Town, stretching along the banks of the Saône River. For relaxation, children’s walks and sport, the picturesque Golden Head Park is ideal.

Toulouse is home to the main observatory of France, and there are companies of the aerospace industry. The architecture of the historical center of the city is quite unusual – the old buildings are made of pink bricks, and this color prevails in the building of the district. The canal South, which connected Toulouse with the city of Sete on the coast of the Gulf of Lyon, is an outstanding monument of engineering.

Bordeaux, the capital of Aquitaine, is a romantic city, famous as “Little Paris”: evening lights, elegant streets, arches and bridges, medieval gates – all this encourages long walks. Tourist trails run along the pedestrian St. Catherine Street, cover Exchange Square and the nearby fountain-monument to the Girondins.

There are many interesting places in other cities in France. So, to visit Rouen is worth for the historic complex of Joan of Arc and the magnificent Gothic cathedral, included in the list of World Heritage Sites. And in Honfleur begins the Pont de Normandie, one of the longest suspension bridges in the world.

There’s so much to see in France that it’s hard to pick the best sights in the country. Huge gorges, fabulous caves, dramatic cliffs, picturesque towns and villages, ancient castles, beautiful vineyards, sunny beaches – so much has gathered in one country… But there are a number of attractions that are recognizable around the world, which have become the hallmark of France and which can not be missed.

The 10 best sights of France:

The most famous tower in the world, the absolute and universally recognized symbol of France: 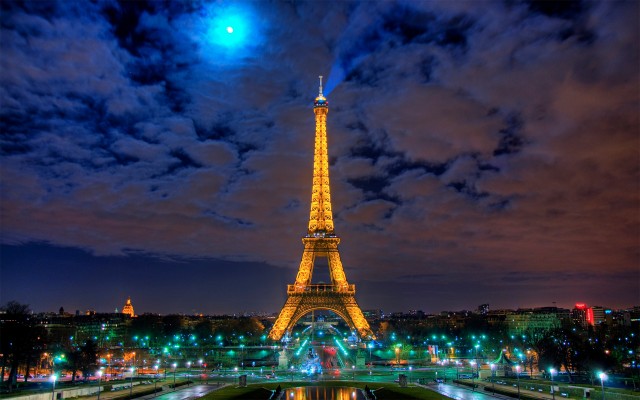 The most impressive architectural ensemble: an ancient abbey surrounded by a small town on a rocky island in Normandy, the road to which sometimes hides, sometimes reopens at low tide.

3. The Papal Palace in Avignon

The magnificent, monumental, enormous palace, the Palais des Papes, is a legacy of the period of the “captivity of the Popes of Avignon.” 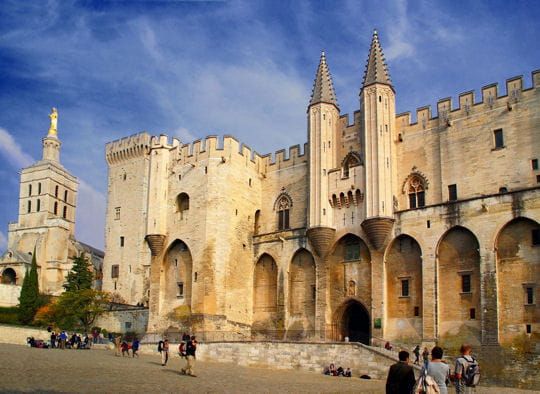 A masterpiece of palace art, the favorite residence of the Sun King, which became a symbol of the absolute monarchy of France. Versailles became the model for many subsequent palaces, including Peterhof. 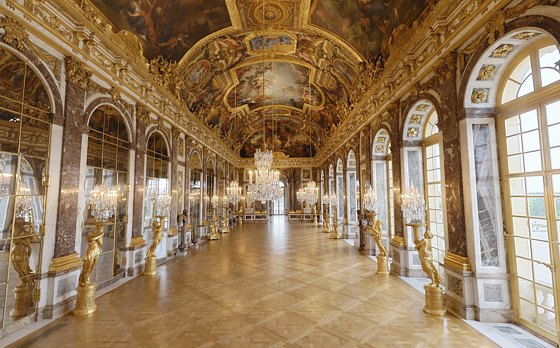 Verdon Gorge (Gorges du Verdon) – the deepest and most beautiful gorge of France, sometimes more than 700 meters deep. It is located in Provence along the Verdon river.

Romantic lilac fields of fragrant lavender have become a symbol of Provence. The plateau of Valencole is best known for its lavender fields. However, there is also a sea of purple around the other towns in Provence.

The most beautiful chateau in France, an example of French Renaissance. Chateau de Chambord is located in the Loire valley and is one of the three most popular Chateaux of the Loire, along with the castles of Chenonceau and Amboise. The Château of Chambord was the first castle in the valley to be added to the list of UNESCO World Heritage Sites and later the entire valley was included.

Situated in the very south of France, close to the Spanish border, Carcassonne is listed as a UNESCO World Heritage Site for its perfectly preserved medieval fortified town and castle ensemble. About 4 million tourists visit Carcassonne every year – it is one of the most visited attractions in France.

Pont du Gard is the highest surviving Roman aqueduct. This bridge was part of a 50-meter long aqueduct built to transport water from the Uzes springs to the city of Nîmes.

A unique example of a royal residence beloved for centuries.