Zurich (Switzerland) – the most detailed information about the city with photos. The main sights of Zurich with descriptions, travel guides and maps.

Zurich – the largest city in Switzerland and the capital of the German-speaking canton of the same name. It is located in the northeastern part of the country in a picturesque setting on the shores of Lake Zurich. Zurich is the economic and cultural center of Switzerland, as well as one of the largest financial centers in Europe. But it is not a boring city of banks and headquarters. Zurich is a fascinating place with interesting sights, a well-preserved old town with medieval and Renaissance buildings, many museums and galleries.

Zurich is one of the most expensive cities in the world, but at the same time one of the best quality of life. The city is known for its cleanliness, neatness and liberal atmosphere, which, in its time, attracted such historical figures as Lenin, Büchner, Jung, Mann. Zurich is a perfect place for travelers of all types: history buffs can stroll through the old town and explore the old sites, art lovers can visit the many museums and art galleries, party lovers can stroll through the clubs, bars and restaurants. 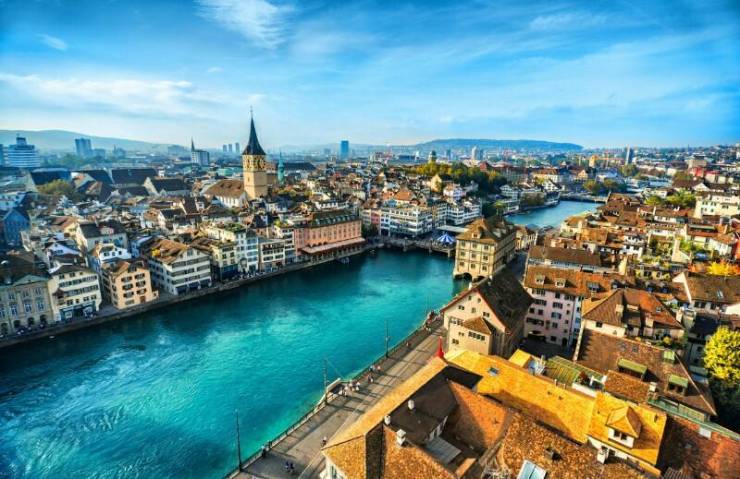 Things to do (Zurich): 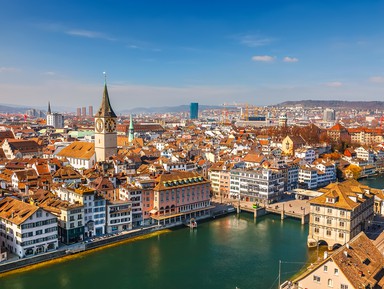 Walking in the center of Zurich 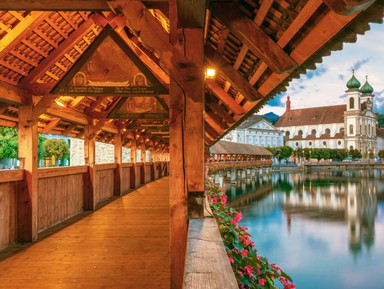 To the fairytale city of Lucerne

Travel from Zurich to the open air museum city and admire the beauty of the lake.

Zurich is located in the northern part of Lake Zurich at the source of the Limmat River, which crosses the historic center. The city is situated in a valley between the Uttliberg and Zurichberg mountains, 30 km north of the Alps. That is why Zurich is sometimes called the “gateway to the Alps”. 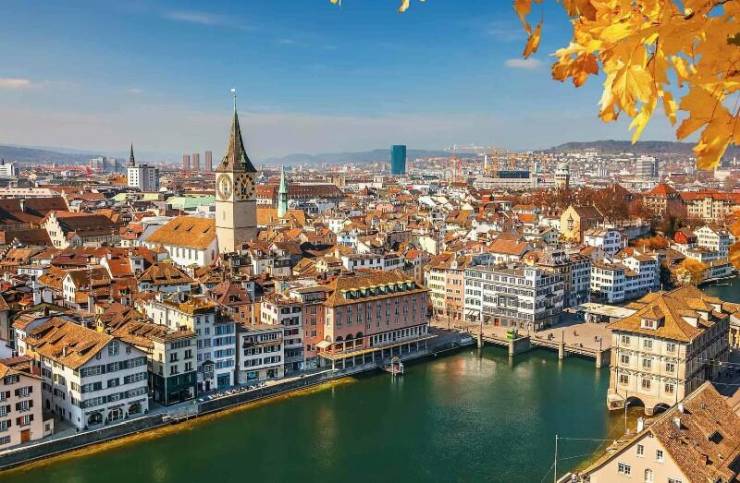 The climate is temperate continental with warm but rainy summers. Winters are cool with light frost and unstable snow cover.

In ancient times there was a Celtic settlement on the site of Zurich, which in the 1st century BC was conquered by the Roman Empire. The Romans built here a customs post between Rhaetia and Belgica, and named it Turicum. The first mention of the city dates back to 929. 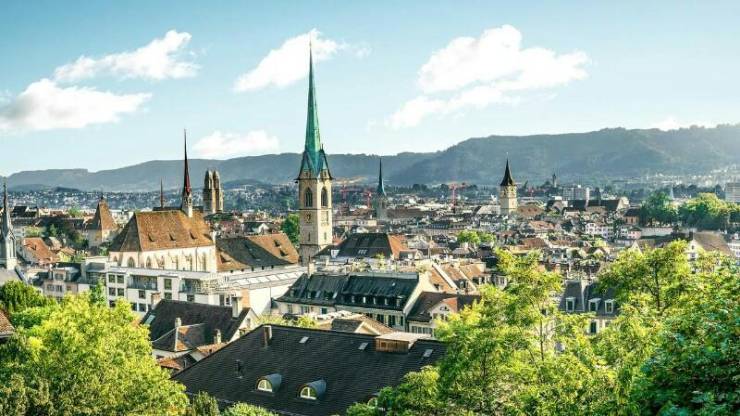 In the 13th-17th centuries Zurich was an imperial city within the Holy Roman Empire. In 1351 it became a member of the Swiss Union. In the 16th century Zurich became one of the centers of the Reformation, which was led by Ulrich Zwingli. 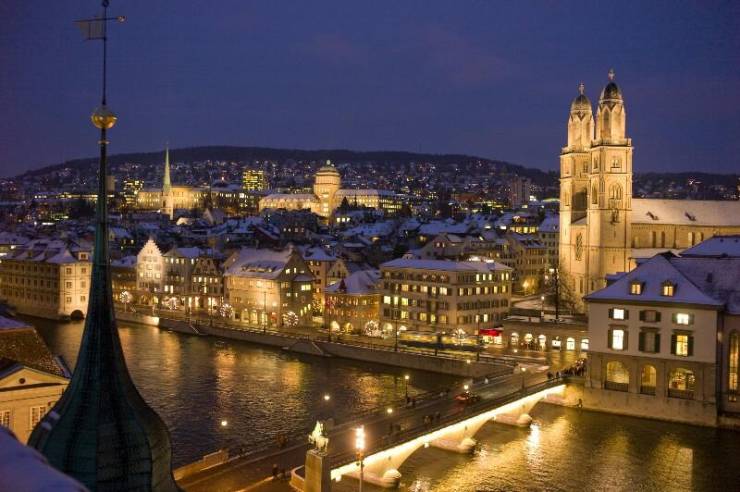 From the 16th to the 18th century Zurich reached its highest point of prosperity. In 1648 it changed its status from an imperial city to a republic. In 1847, the first Swiss railroad linked Zurich with Basel. In March 1945 it was mistakenly bombed by the Americans.

Zurich is the largest and most important transportation hub in Switzerland. The city has the largest and busiest airport in the country. From the airport to the center of Zurich there are regular trains. The main railway station (Hauptbahnhof) in general is the largest in the world. The station takes almost 3,000 trains a day and has a passenger flow of 350,000 to 500,000 people daily. No wonder that it is easy to get to Zurich from almost every major city in Europe by plane, train, bus or car. 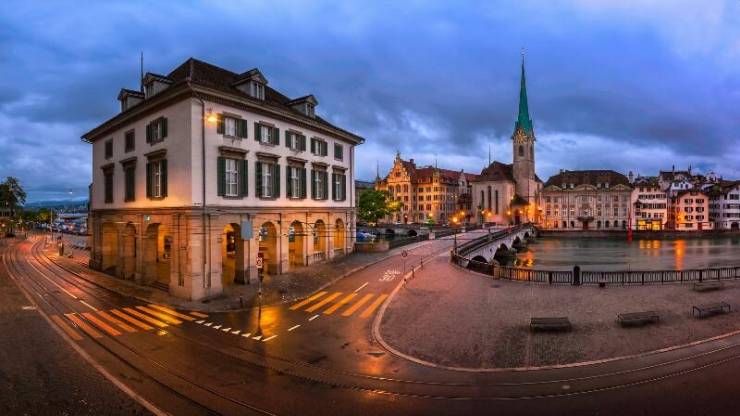 Zurich’s Old Town is the medieval charm of its old streets, ancient buildings and churches, and the splendor of its monumental 19th and 20th century architecture. The Zurich Altstadt is located on the eastern bank of the Limmat River and has a variety of architecture, from medieval Gothic to modern architectural trends. 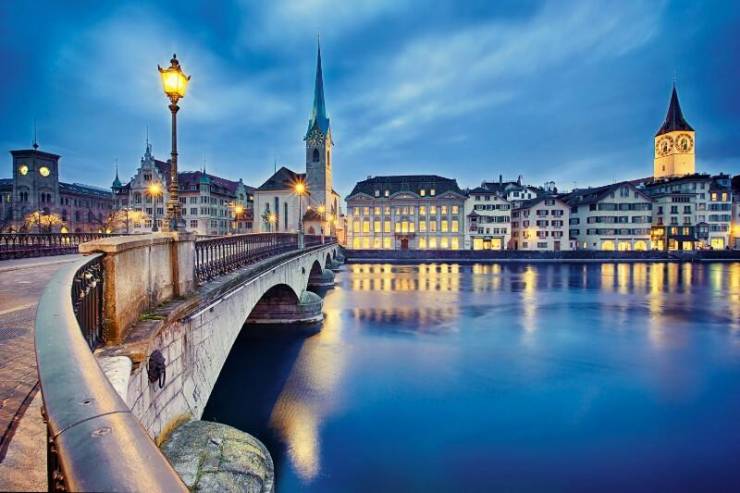 In the Middle Ages Zurich was surrounded by a city wall. To this day, the old city walls have not survived. The old town contains all the most famous historical landmarks of Zurich and therefore is the center of attraction for all guests of this wonderful city. 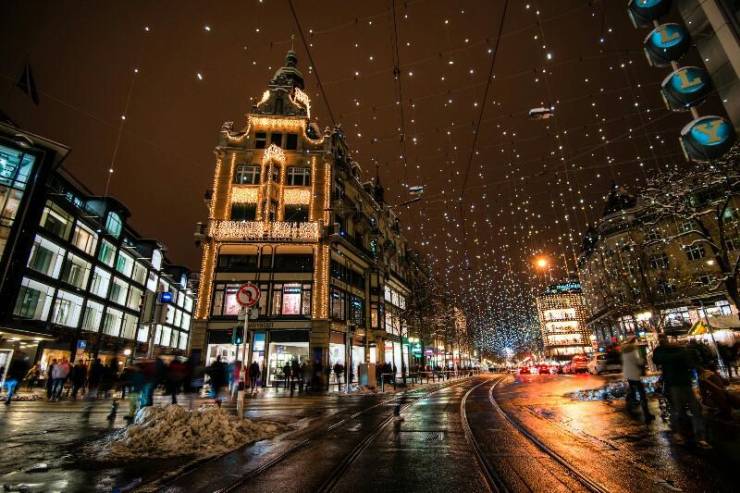 Bahnhofstrasse is the main street of Zurich. It is a lively pedestrian thoroughfare that runs from the main train station to the Bürkliplatz on the shores of Lake Zurich. Bahnhofstrasse is considered one of the most attractive shopping streets in Europe with many expensive stores and 19th-20th century architecture. 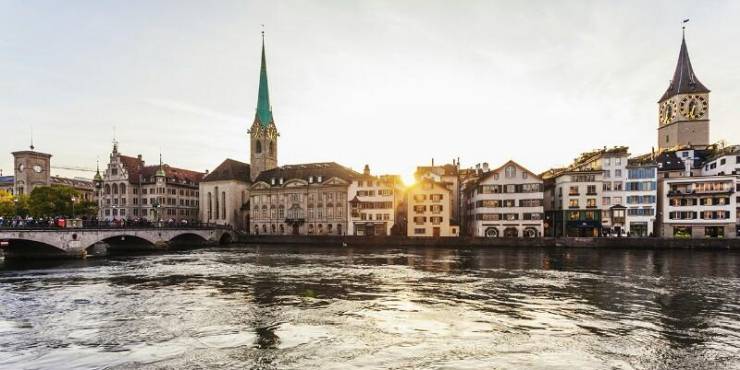 The Fraumünster is one of the oldest churches in Zurich, located on the Limmat Embankment in the old city. The church was founded in 853 by Emperor Ludwig. The modern building is a beautiful three-tiered columned basilica from the 13th to 15th century with a Gothic nave, a Romanesque altar and an Early Gothic transept. You can also see fragments of the crypt from the time of the ancient abbey of the 9th century. Interesting features of the Fraumuenster are the beautiful stained glass windows and the altar.

READ
7 places to visit in Cyprus 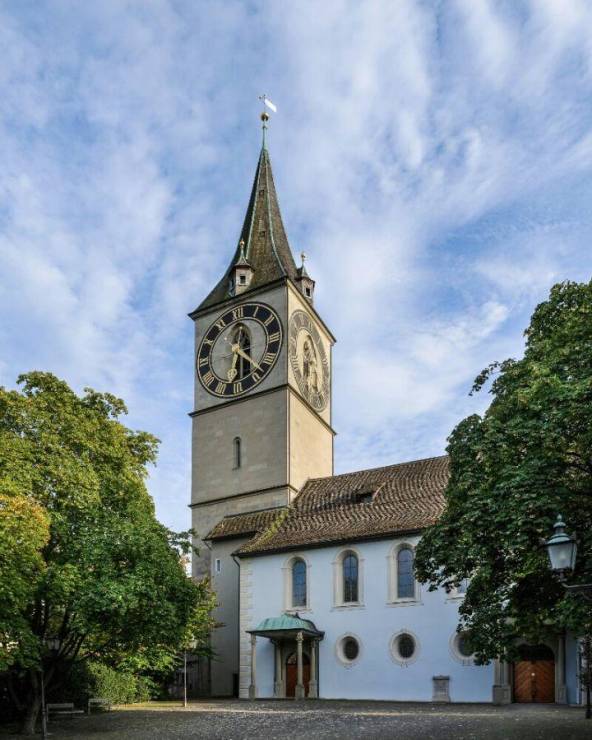 St. Peter’s Church is the oldest parish church in Zurich, founded in the 9th century. The original structure of the ancient building is still visible under the altar. The current building is Gothic, has an early 13th-century Romanesque choir and a Baroque nave with three aisles and galleries. The most interesting feature of St. Peter’s Church is the giant clock on the tower, which is the largest in Europe (dial diameter 8.7 m). 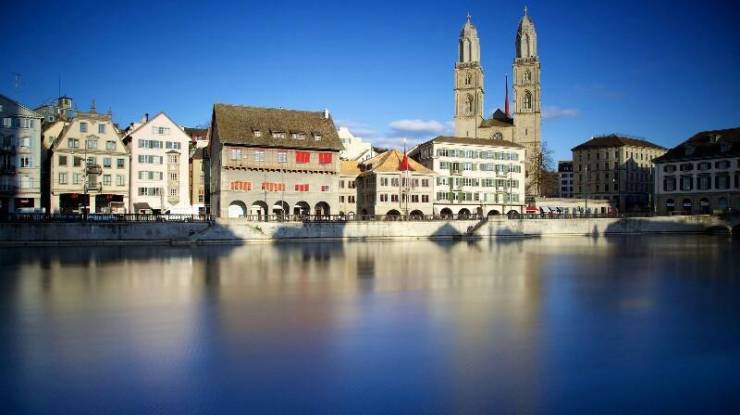 Grossmünster is the largest religious building in Zurich, an imposing Romanesque basilica built between the 11th and 13th centuries. In the 16th century, the church became one of the centers of the Reformation. The most interesting feature of its architecture are the twin towers. The upper levels of the towers were completed at the end of the 15th century. 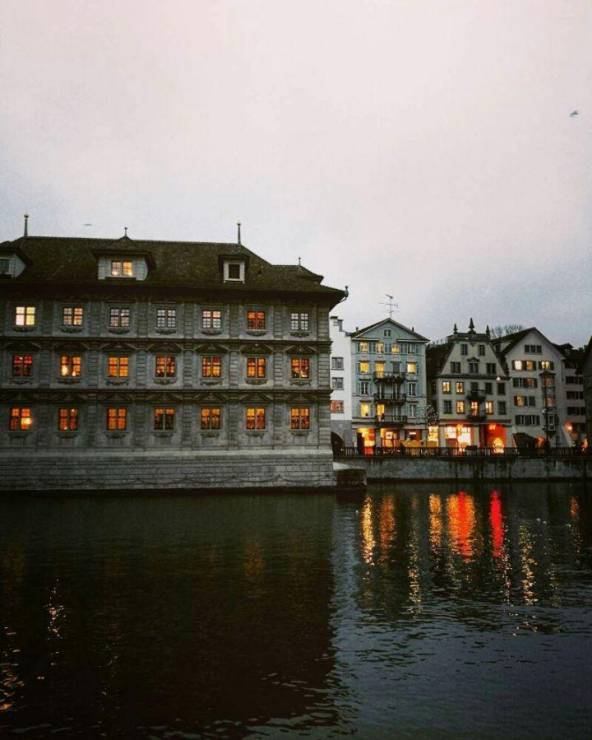 Old houses along the Limmat River

Along the Limmat riverfront are several elegant old guild houses with sumptuous interiors reflecting the wealth of the guilds that ruled Zurich before 1789. There is also the town hall, which overhangs the river and is supported by the arches of a bridge. It was built between 1694 and 1698 in late Renaissance style.

Lindenhof is the oldest part of Zurich, located between the Bahnhofstrasse and the left bank of the Limmat River. It was here that the Romans built their fortified settlement. Charlemagne later built his royal residence here. These ancient buildings have not survived to our time. Now there is a park with stunning views of the old city.

Other sights and interesting places in Zurich 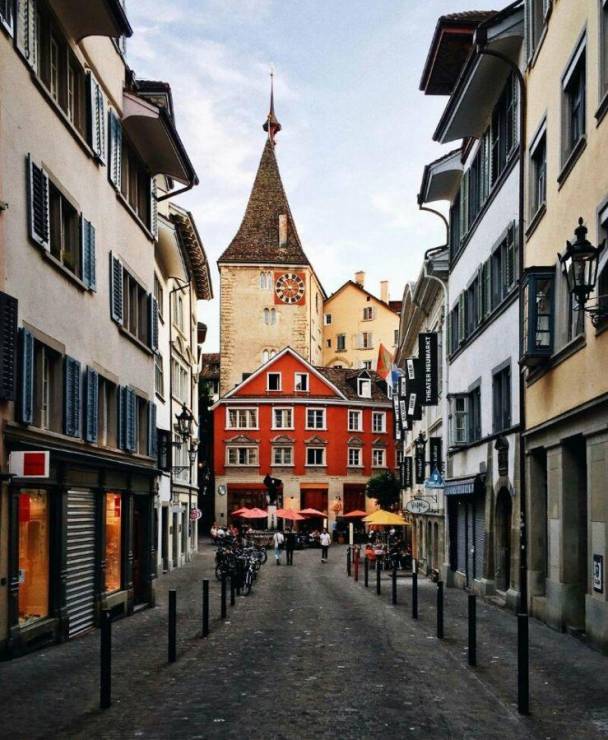 Niederdorf is an area of the old city that is a pedestrian zone. Part of this area is the Neumarkt (New Market), founded in the 12th century as a suburb of medieval Zurich. 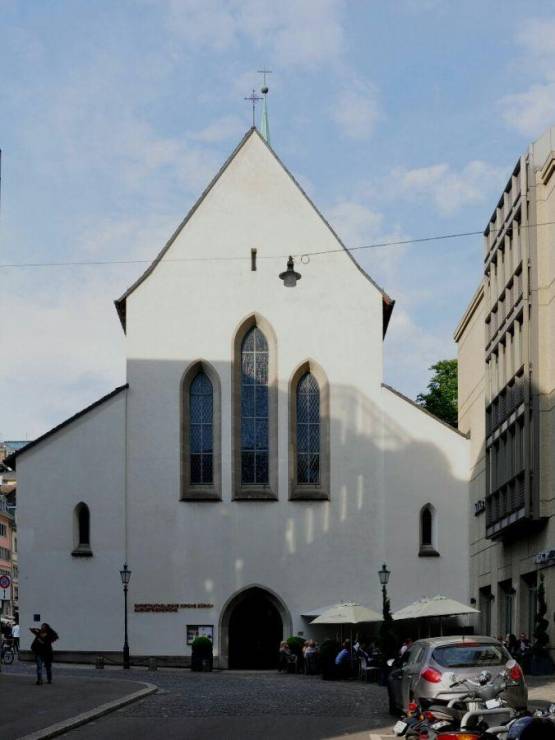 The Church of St. Augustine is a 12th-century medieval church built on the west side of the old city. After the Reformation, the church was converted into a coinage workshop. In 1841 the building regained its status as a religious building. 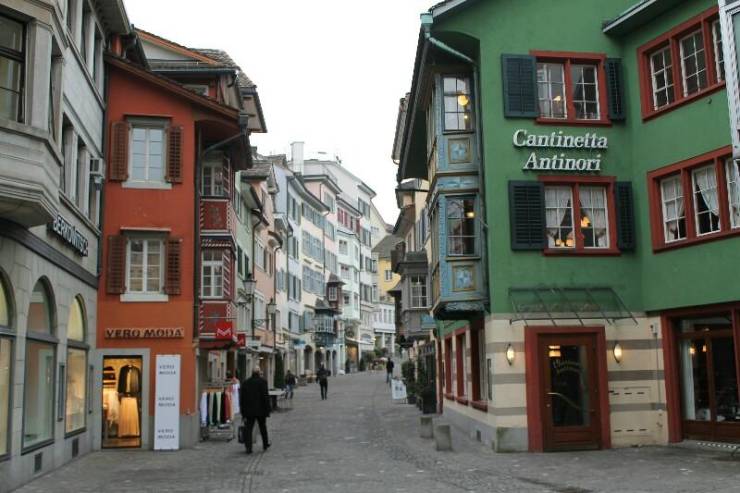 Augustinergasse is one of the most beautiful historical streets in Zurich. 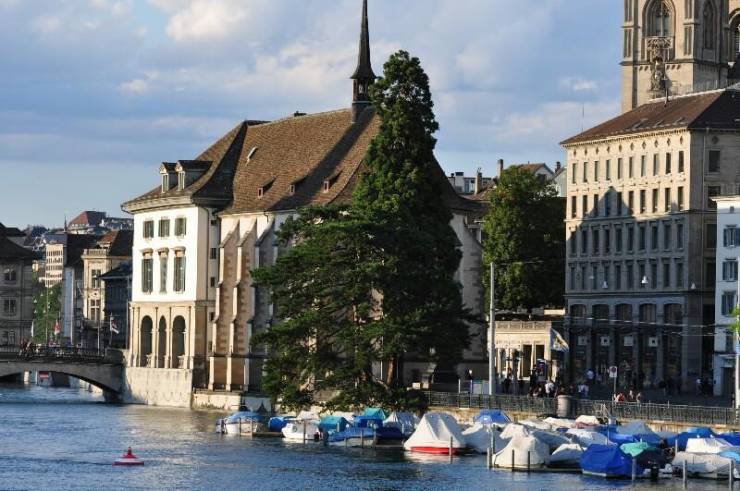 The Water Church (Wasserkirche) is a late Gothic church completed in the 15th century. According to legend, it was built in the place where the Christian martyrs Felix and Regula were executed by the Romans. 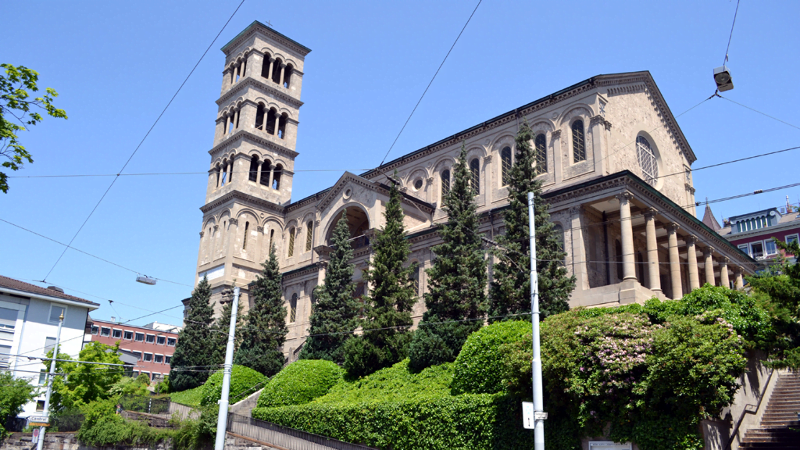 Liebfraukirchen was built in 1893 in the style of an early Christian basilica. The tower resembles a Romanesque bell tower. 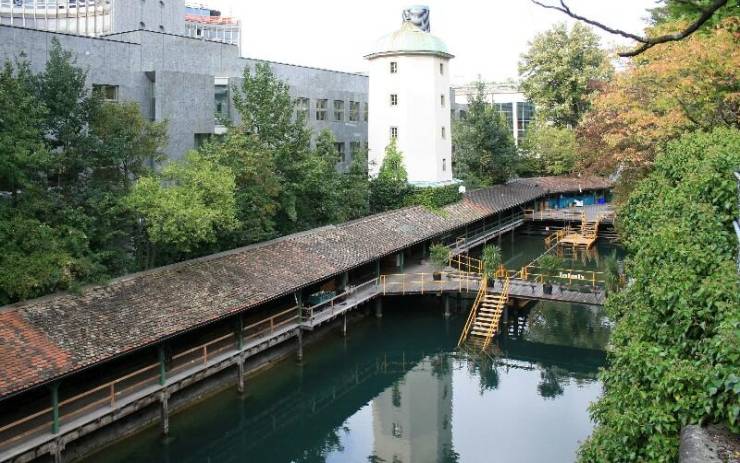 Schanzengraben is an idyllic promenade in the center of Zurich. You can enjoy a quiet walk here.

Things to do in Zurich: 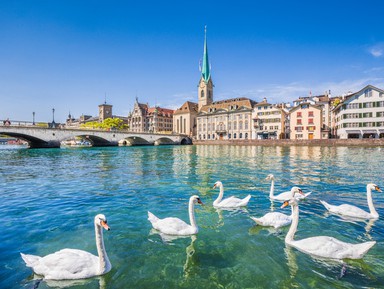 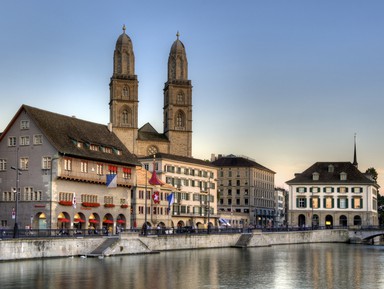