The Black Sea is a body of contrasts, stories and legends. As any huge water resource, it has hundreds of secrets. Especially interesting is the Black Sea at the junction with the Sea of Azov – there you can appreciate the beauty of their differences and scale. If the Azov Sea is more like a huge lake with little depth, the Black Sea is a real abyss. It is ominous, beautiful and fascinating abyss.

Paleontologists believe that the region of the Black Sea has been home to saline bodies of water since the formation of the Earth: the Pontic and then the Meotic Sea. In other periods the area dried up, and freshwater springs-lakes were formed here. The sea acquired its present-day boundaries, depth and water type a little more than 8,000 years ago. The reason for these changes was the devastating earthquake that formed the Bosphorus Strait. Due to it, the Mediterranean Sea joined the water source nearby and began to give water to the “newborn”.

The Black Sea has an area of over 422 square kilometers. Its length is 580 km from north to south while its maximum depth is 2210 m. The water body connects southern Europe and Asia Minor.

Facts, Mysteries and Wonders of the Black Sea

There is more than one long story or legend about the Black Sea. Here are only 15 little, but interesting facts about it:

The Black Sea sheltered on its shores thousands of resorts and sanatoriums, which are visited by millions of tourists every year. However, few people think about how much power and danger lurks in these hospitable waters. 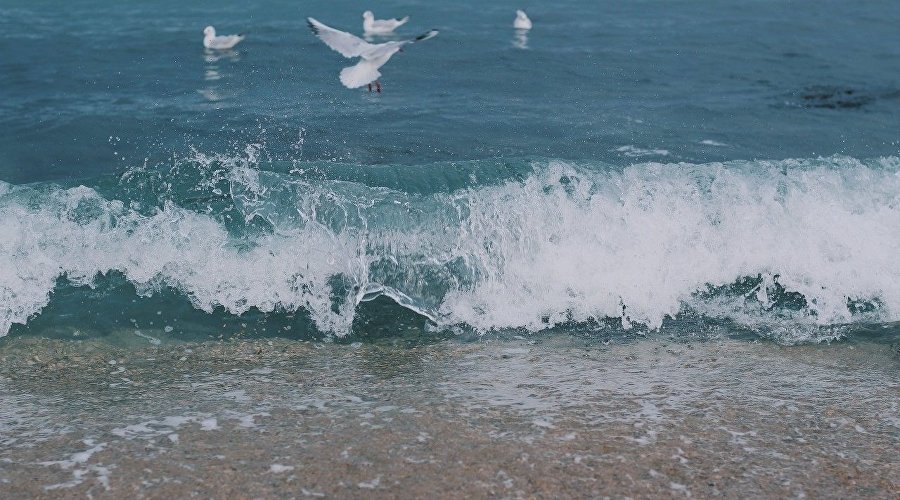 Birds on the Black Sea

Today, October 31, the International Day of the Black Sea is celebrated. This day in 1996 six Black Sea countries – Russia, Ukraine, Georgia, Bulgaria, Turkey and Romania signed the Strategic Plan of action for the rehabilitation and protection of the reservoir.

Tourportal Travel Crimea has collected the most interesting facts about the Black Sea. Test yourself: do you know everything?

In the top ten of the largest

The most “hydrogen sulfide” sea

The Black Sea is home to 2,500 species of animals, 270 species of multicellular algae and over 600 species of phytoplankton. At the same time there are almost no deep inhabitants in it, because the water at a depth of 150 meters is extremely saturated with hydrogen sulfide, only a few species of bacteria survive there. 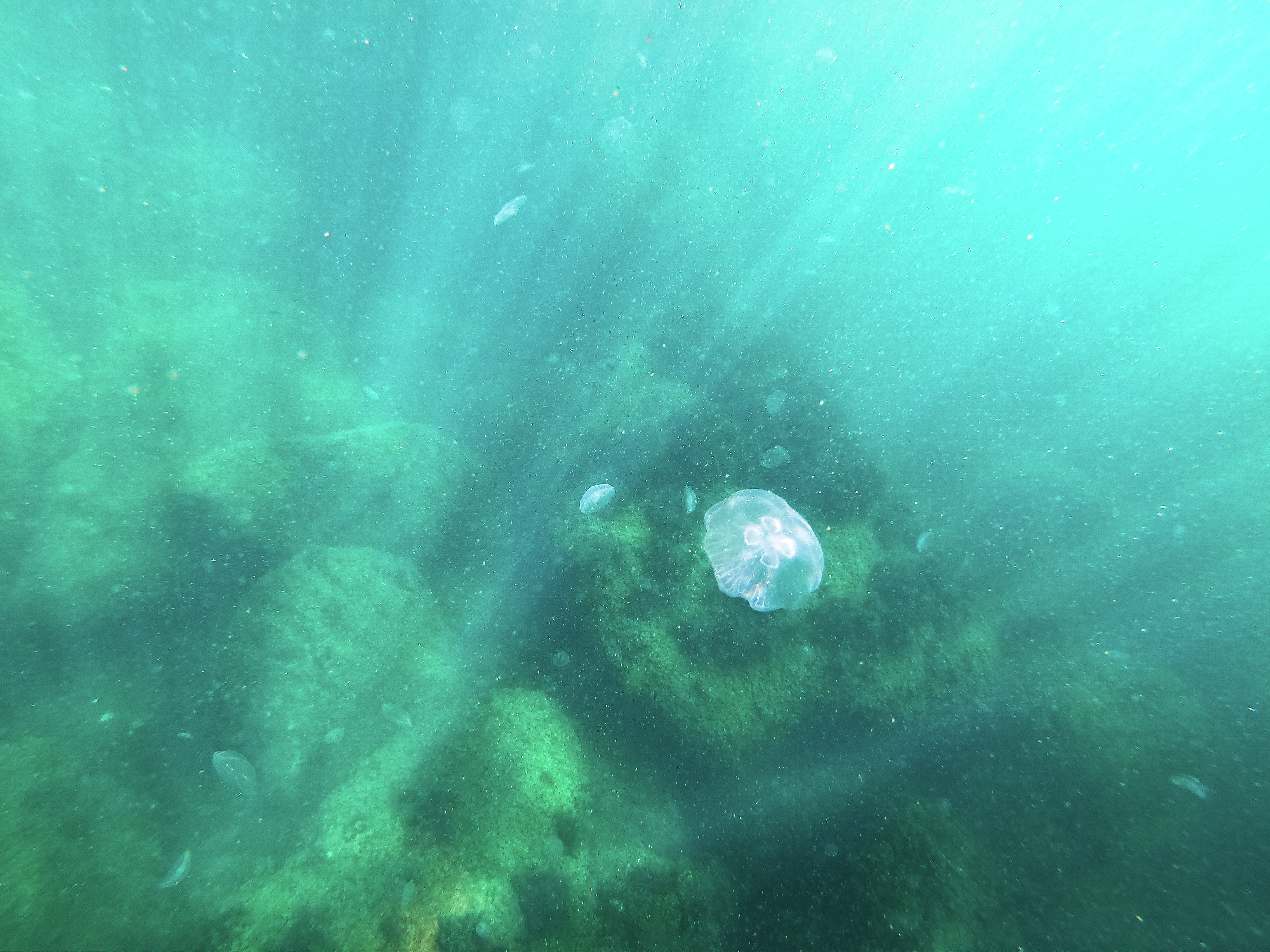 The “universals” and the newcomers

According to the Federal Research Center “Institute of Biology of Southern Seas, RAS” in Sevastopol, over the past 5 years, scientists discovered about 100 new species of the Black Sea inhabitants: among them are found as “universals” previously lived in other bodies of water, and those who have not yet been known to science.

However, not all the inhabitants of the Black Sea are harmless. For example, in 1974 a predatory shellfish Rapana, which ate all the oysters, was carried there by the current through the Bosporus and the Dardanelles straits.

There are three species of dolphins in the Black Sea – azovka, or porpoise (the smallest dolphin), aphaline and white-sided dolphin. Moreover, the first two species are listed in the Red Book of the Russian Federation as endangered. By the way, in June 2020 during the expeditionary research conducted by the Institute of Biology of Southern Seas, scientists found a very rare albino dolphin (completely white). The last time such a species of mammal, according to them, was seen 6-7 years ago. 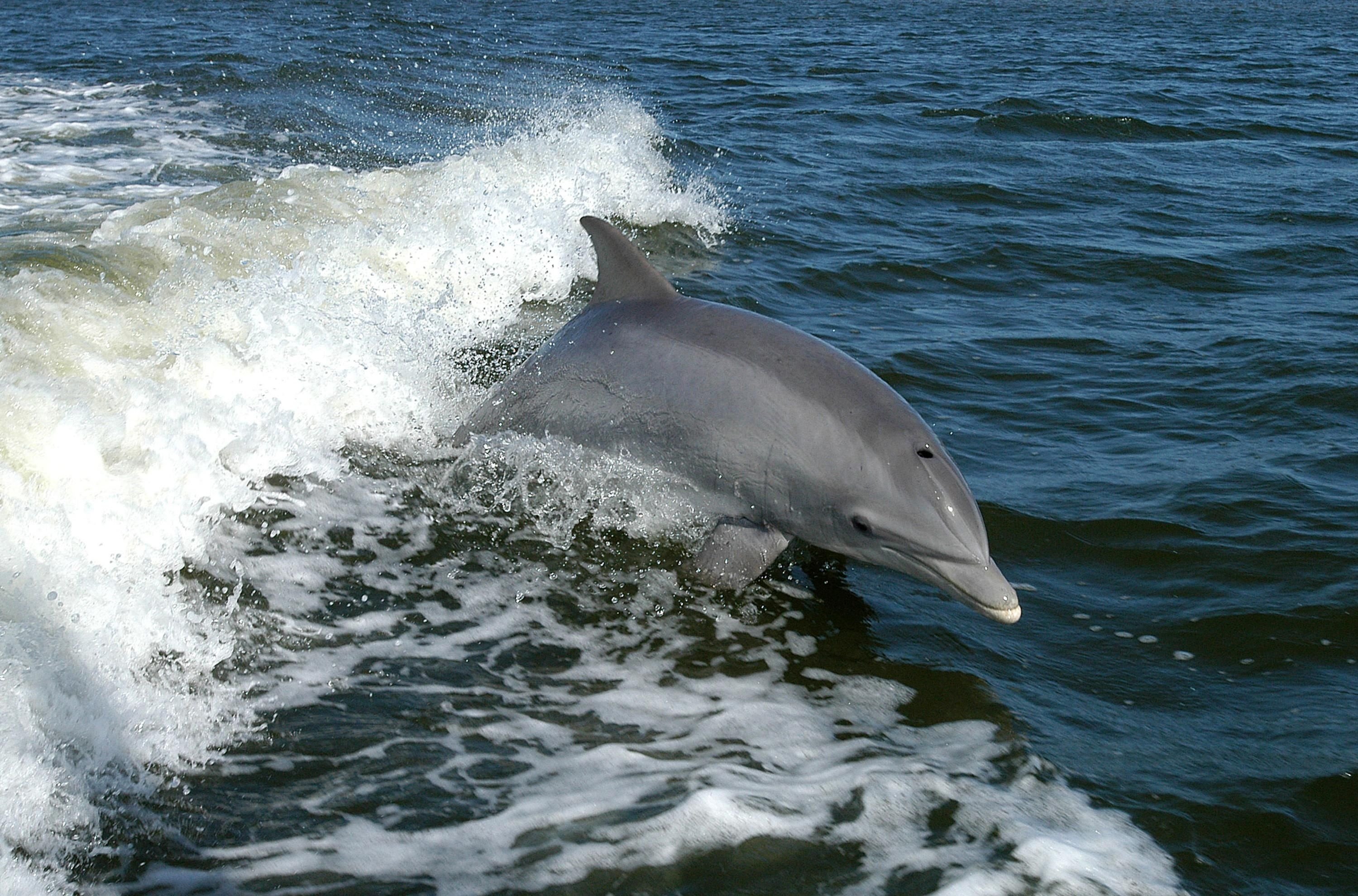 In the Black Sea there are also white-bellied seals. A small number of them lives off the coast of Bulgaria. Single individuals occasionally visit the shores of Romania. Part of the population is found in the waters of Turkey. Until the end of the last century these seals could also be seen in the south-west of Crimea.

There are sharks in the sea, but only of one species – Katrana. They rarely grow over a meter in length, but have poisonous spines on their dorsal fins. Catranians are very fearful and stay away from the shore and from people.

Over the centuries of history, the Black Sea has changed a lot of names. For example, the ancient Greeks called it the Pontus of Aksin (Inhospitable Sea), and later the Pontus of Euxin (Hospitable Sea). The Indian tribes, in turn, chose the name Temarun, and the Iranians – Akshaena. In ancient Russia, until the 16th century, the body of water was Russian or Scythian.

So why did it end up being Black?

There are at least two versions. The first says that in the old days the north on the maps was marked with black color (south – white), and the sea was located exactly in the northern part of the maps. The second hypothesis is related to hydrogen sulfide, which coats metal objects that have fallen to the bottom (e.g., a ship’s anchor) with a black deposit. 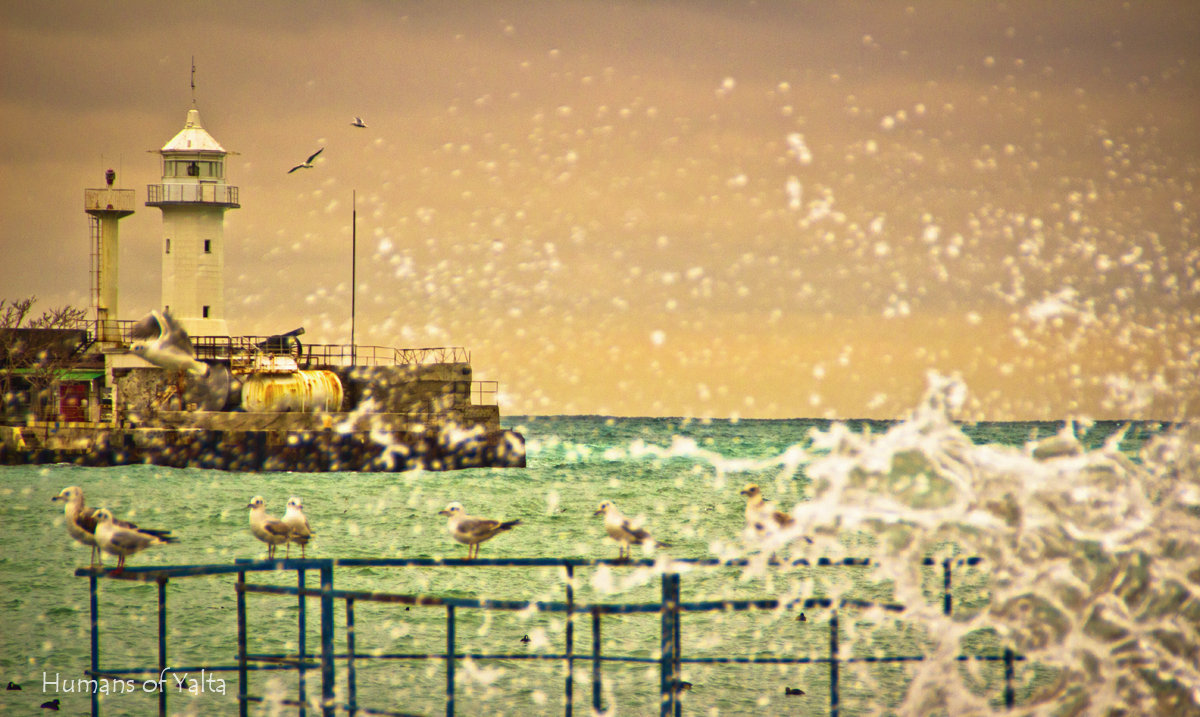 In 1820 the first steamship was launched on the waters of the Black Sea. It was paddlewheeled “Vesuvius” length of about 29 meters. It was built of oak and partly of pine in Nikolaev. The vessel was a part of the Black Sea Fleet, and was used for towing and cargo transportation between Kherson and Nikolaev.

Whirlpools, tides, and ebbs and flows

There are two looped whirlpools in the Black Sea with a wavelength of 300-400 km, which are shaped like glasses. This scheme was first described by the oceanologist Nikolai Knipovich. In honor of him it became known as the “Knipovich’s goggles”. And the Black Sea has no pronounced tides because of the weak water exchange with the Atlantic Ocean.

To bathe is like to fly into the space.

Very unusual, even a fantastic sight can be observed in summer. Black Sea waters, heated to 24 degrees and above, glow bright blue at night. This occurs due to single-celled microscopic algae noctiluca (nochesvetki), which emit this “disco” luminescent light with any movement in the water.

About the Black Sea there are numerous tall tales and myths. There are “sensations” about the goblin shark that has been found in the Internet, or some “experts” predict an “ice age” for the body of water. One of the most popular legends is devoted to Karadag snake, mentioned by Herodotus. Allegedly, a black creature with a huge mouth and mane, big teeth and claws swam with incredible speed, outrunning even fast ships. Rumors of the monster have not subsided to this day. 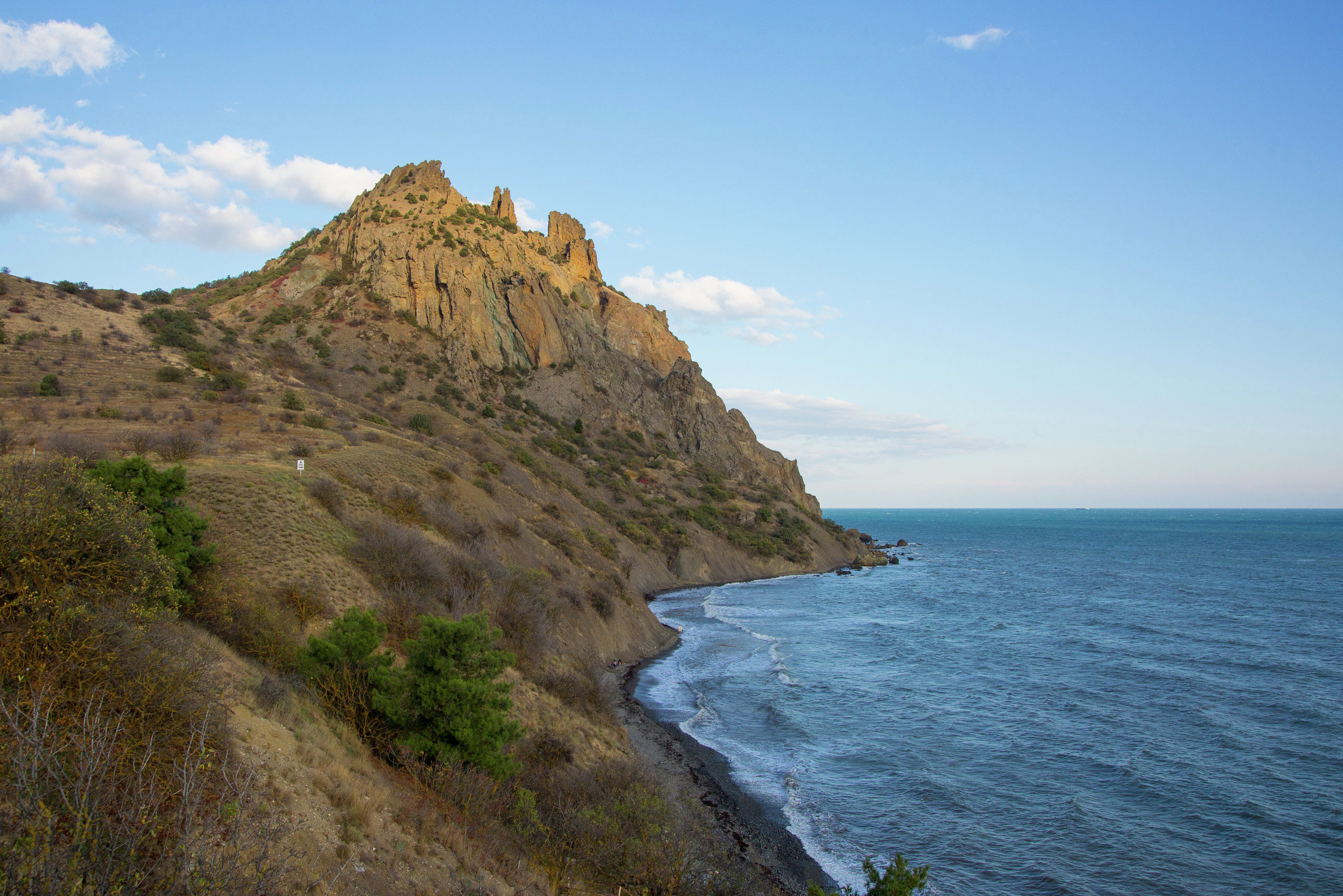 The Black Sea also contains many tragic stories. More than a thousand coordinates of sunken ships and aircraft are included in the books of maritime catastrophes. The most “elusive” ship was called the “Armenia”, which sank during the German bombing on November 7, 1941 near the southern coast of Crimea. According to various calculations there were from 6 to 10 thousand refugees and wounded on board. The shipwreck was found only in April 2020. During the 20 years of very active searching more than 300 square kilometers of the sea floor had been explored. Today many Crimean diving clubs offer tourists an underwater tour to the sites of sunken ships.

In the near future the first National Marine Park can appear in the Black Sea – do not exclude the specialists of the Institute of Biology of Southern Seas RAS. They suggest the best and the most ecologically clean place for it – the Karkinit Gulf. According to scientists, in the Black Sea – if we take all Black Sea countries – there are over 60 marine protected areas with different statuses. Most of them are near the coast of Crimea.

The best muse at all times

The Black Sea has always been inspiring creative people. Storms and tempests, beaches, rocks, secluded bays have become the setting for a huge number of pictures of the famous marine painter Ivan Aivazovsky. A lot of beloved domestic films were also filmed here, including the Crimean coast: “Three plus two”, “Scarlet Sails,” “Amphibian Man”, “Pirates of the XX Century”, “Scuba Divers at the Bottom” and others.

Beaches to suit all tastes

Finally, rest on the Black Sea coast is probably the dream of every tourist. Depending on the region of the Crimea beach areas differ in their types: for example, for the South Coast are characterized mainly by pebble, for the west coast – sandy, for the east – mostly sandy and in some places, for Sevastopol and Balaclava – sand and pebble. 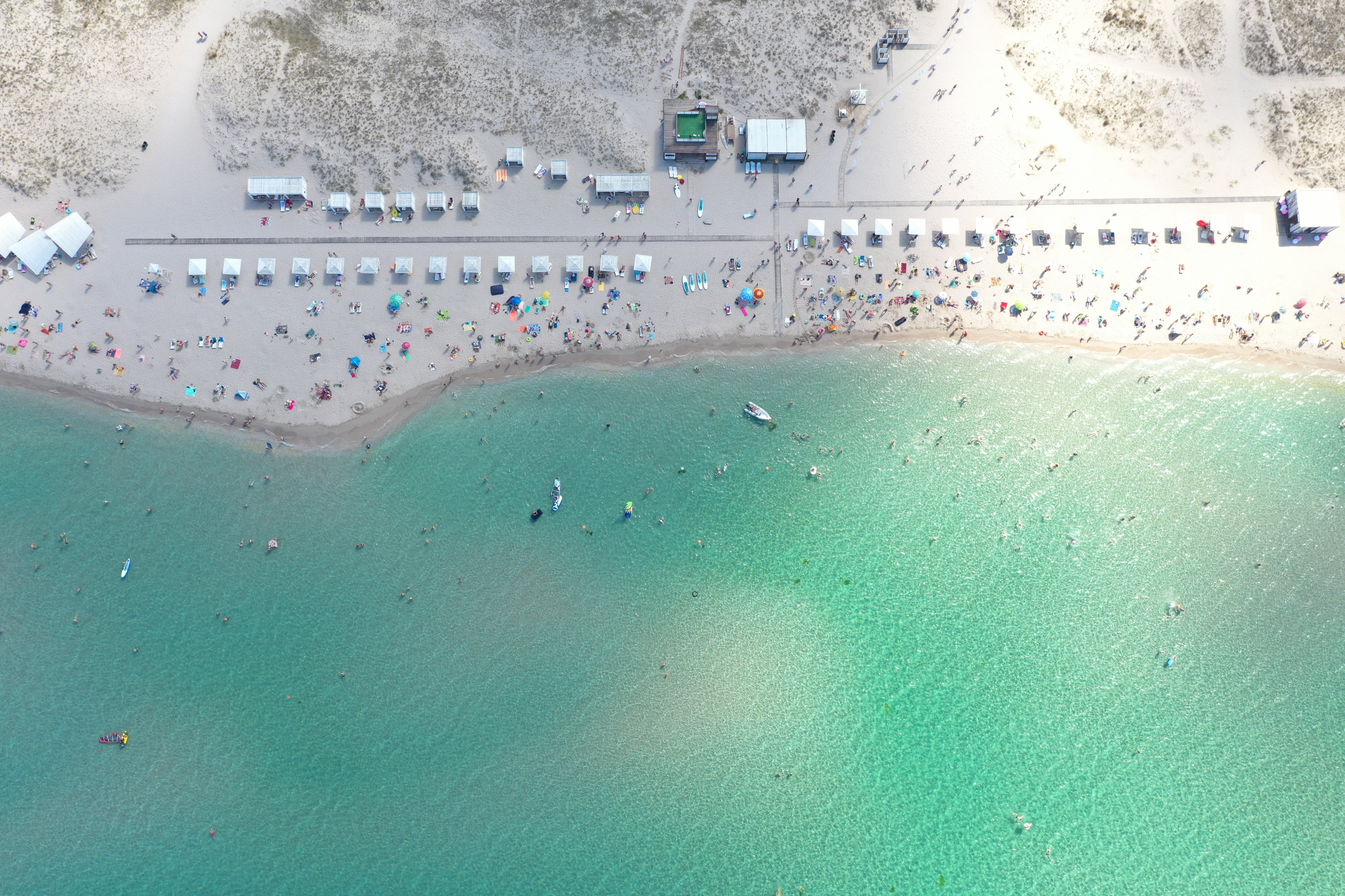 “The Black Sea is the safest place to rest and the most touristy because there are no dangerous dwellers, and the Crimean coast has a unique feature – a variety of beaches. There are beaches with white sand – this Tarkhankutsky peninsula, there are with yellow – this side of Evpatoria and Feodosia. The most unusual beaches – with black volcanic sand – are in Sudak and southeastern part of Alushta. There is a shallow water – there were formed children’s resorts, there is a deep coast. We even have our own Crimean Maldives, “- concludes tour guide Dina Mulyanova.

Want to be aware of the most interesting tourist news of the Crimea? Then write us at info@travelcrimea.com and we’ll include you in our newsletter