How to get to the world’s highest waterfall

Angel Falls fall from a cliff over a thousand meters high called the Devil’s Mountain. Below, the water breaks into thousands of drops before it reaches the ground, turning into a mist. The sight is unique. That’s why hundreds of tourists dream of seeing this extraordinary wonder.

Where is the waterfall

The unique attraction is located in the state of Venezuela , located in South America. It was discovered in the 30s of the twentieth century, that is, relatively recently. Angel is fifteen times higher than the legendary Niagara Falls: its height reaches 1054 meters. It is almost impossible to reach it on foot: the falls are surrounded by impassable tropical forests and swamps. It was discovered by the American pilot and gold prospector James Angel, who flew by on his fighter jet. After him, the unique natural monument was named Angel, which means “angel” in Spanish. 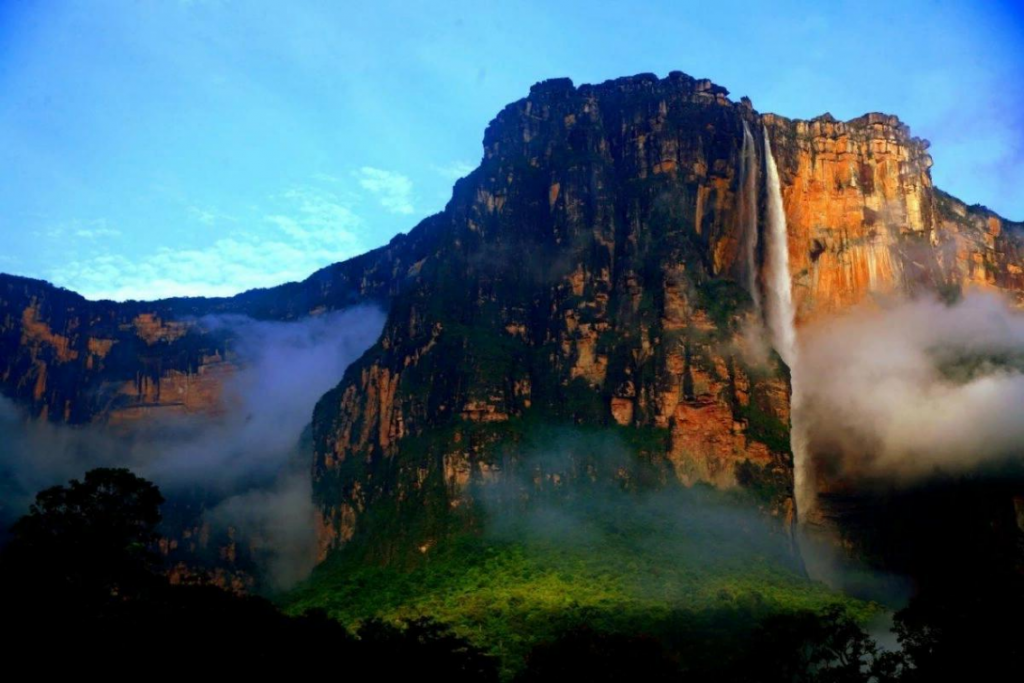 Where is the waterfall

James Angel arrived in Venezuela during the gold rush. He bought an airplane and headed out into the jungle with a group in search of gold. As he flew past Devil’s Rock in clear, sunny weather, he suddenly saw a fantastic sight. A huge, kilometer-high column of water was plummeting down the cliff into the abyss. The height of the fall was so great that the stream, before reaching the bottom, turned into water dust. Somewhere below, this water mist was falling into the Churumi River. The pilot wanted to land on a rock, but the plane crashed. The only way out was to descend the mountain on foot along a trail through the jungle. After eleven days, the group reached a nearby village. Angel reported his find to the United States Geographical Society. His name is now known to all travelers.

How to get to the falls

The unique attraction is located in the Canaima National Park . Getting there these days is not easy. The remoteness and impassability helped save the pristine nature of the reserve, and turned Angel Falls into Venezuela’s most coveted attraction. It is not possible to get there by car because there are no roads through Canaima Park. There are only two ways: by water and by air.

READ
They make Iceland sound - Hatlgrímskirkja and the Sunny Wanderer

There are small airfields for landing light aircraft. Therefore, the bulk of tourists see the landmark from the plane window. But it is not always possible to see the Angel, because the jet of water falls from the height of a steep canyon, which is often covered by clouds and water dust.

Local travel agencies offer the best solution to this problem. First you must fly from the capital by a small light-engine plane to the local town of Canaima, and then take a motorized canoe. It takes about 5 hours to travel up the river, then you have to hike a trail through the jungle to the foot of the waterfall for about an hour. For lovers of the unconventional and exotic, this is the way to go. On the way you can see all the pristine beauty of the national park from a bird’s-eye view, then meet the flora and fauna on the water of the river, see those very impenetrable rainforests during the hike. Fans can even swim in the small lagoon at the foot of the waterfall and admire the unique scenery of the surrounding nature.

Local travel agencies offer tours for one, two or three days. It all depends on the availability of funds and planned time. The Angel is at its fullest during the rainy season, that is, from May to November. During this period it is especially beautiful, but often hidden behind the clouds. During the dry season, from December to April, it is better visible, but not as attractive.

The unique creation of nature is located in the dense forests of Venezuela and is a treasure of the Canaima National Park, where it is located. A stream of water fills the Kerep River and partially disperses in the form of small particles that form fog. The moisture in the air can be felt within a few kilometers.

Location of the waterfall

Angel Falls originates on Mount Auyantepui, which has precipitous slopes and a flat, broad peak. The high-mountain plateau contains several layers of sandstone pierced by numerous cracks. It is these fissures that serve as channels for the powerful torrents of tropical downpours often observed in the area. Water collects here even after a small rainfall, allowing the waterfall to exist.

Auyantepui is the largest elevation in Venezuela, its name translated as “mountain of the devil. The name was probably chosen because of the constant thick fog that surrounded the mountain and seemed to the locals a mystical phenomenon. The word “tepui” itself means “house of the gods” in Pemon Indian. Such mountains are often found within the Guiana highlands. They are characterized by their great height, flat peaks, and steep vertical slopes. They are often referred to as “table mountains”, which perfectly describes the shape of the surface. Because of the terrain, the hills are virtually inaccessible, for hundreds of years there has not set a foot here. This area is ideal for the sprouting of unique plants and residence of unexplored animals.

From time immemorial the local Indians knew of the existence of the water stream, they called it Churun-Meru – “the waterfall of the deepest place.” Only at the dawn of the twentieth century it became known to the world. The explorer Ernesto Sanchez La Cruz was the first to stumble upon the site, but the American pilot James Aingeel is considered the discoverer.

READ
10 Things to Do in Lübeck in a Day, Germany

In 1937, an expedition consisting of the pilot himself, his wife Maria, and two colleagues, Gustavo Jeni and Miguel Delgado, set out in search of ore deposits. Local guides claim that they may also have planned to find diamonds – their existence was told by the natives at the time. In reality, the “gems” were the quartz rocks that abound on Mount Auyantepui. There is also a theory that the group was in search of gold.

The miners had planned to spend several days on the plateau, but were unable to carry out their plans. James Angel wanted to land at the very top of the high ground, but the attempt was unsuccessful. According to various sources, the landing landing gear burst or the fuel line was damaged. The crash did not harm the passengers, but they found themselves completely isolated from the outside world. As a result, the group descended the mountain on their own, their way down lasting a week and a half.

A view of Angel Falls from an airplane

News of the gold diggers’ perilous adventure spread quickly and the waterfall was named after the pilot. The Spanish variant of Angel’s last name is Angel, so the name became that. The plane stayed on top of the mountain for the next 33 years, then was evacuated with the help of a special helicopter. At the moment, the airliner is placed near the airport of the Ciudad Bolivar settlement in Venezuela.

In 1949, members of the National Geographic Society, one of the largest scientific organizations in the United States, went to the waterfall. The scientists calculated and officially documented the exact height of Angel. All of their observations during the trip were recorded and then published as a book. In 1994, UNESCO listed Canaima National Park and Angel Falls as a World Heritage Site. In the spring of 2005, climbers from England, Venezuela and Russia made the first pass of the wall of the waterfall.

In December 2009, the head of Venezuela, Hugo Chavez, announced the change of the name of the waterfall to Cerepacupa y meru. This was done due to the fact that the natural landmark is the property of the state and cannot be named after a citizen of another country. In addition, the site had been known among the locals long before James Angel discovered it. Such a statement of the President is true for the Venezuelans, but the falls are known worldwide as Angel. Most likely, on the maps of all countries its name will remain unchanged, the innovation will affect only Venezuela.

Angel Falls are located among the tropical vegetation. Venezuelan authorities did not build asphalt roads to this place. Tourists can get to the site by air or by boat with a motor. Fans of extreme experiences have the opportunity to try jumping off the edge of the plateau on a hang-glider.

The village of Canaima serves as the starting point of the journey to the waterfall. The town has many hotels, restaurants and souvenir stores for tourists. It is accessible from Caracas or Ciudad Bolívar. There are many planes operating regular and commercial flights. Tickets range from $110 to $350. Upon arrival, you will need to pay a certain amount to visit the National Park and provide a certificate of yellow fever vaccination.

It is recommended to visit the falls from spring to fall, as Angel is impressively full at this time. The only obstacle may be cloudy weather – during this period, it is almost impossible to see the attraction. In the winter, the waterfall is not as lively, but there is a chance to get a good look at it.