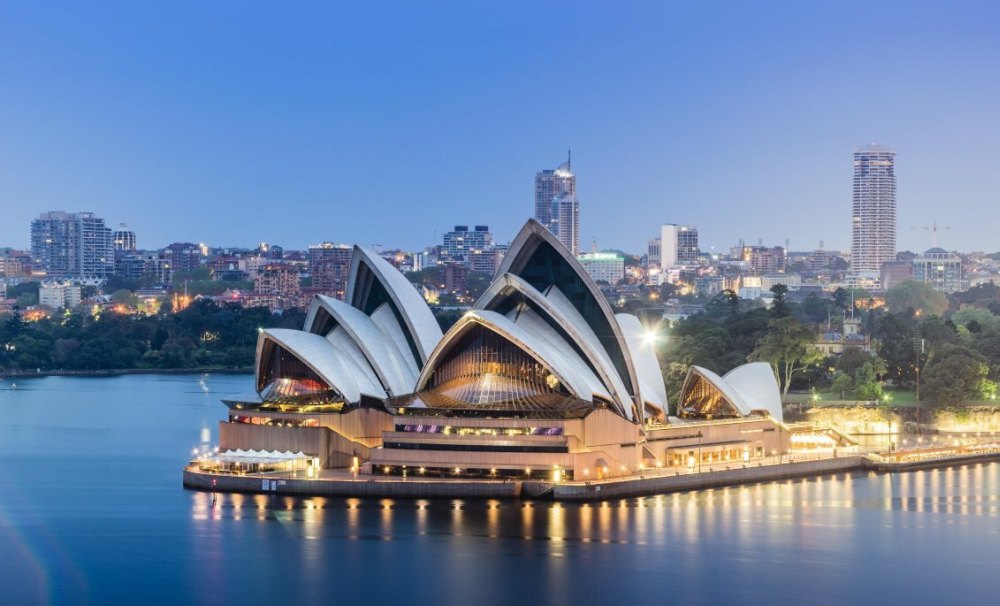 In Australia’s largest city, Sydney, a unique and astonishing building of world architecture, the Opera House, has been built. The Sydney Opera House is a multifunctional structure, not just a building but a work of art, the pinnacle of human creative genius.

A symbol of frozen music

The Sydney Opera House owes its appearance to the British conductor Eugene Goossens, who arrived in Australia in 1947 to record the Sydney Symphony Orchestra’s concert on the radio. The Briton was shocked by the fact that there was nowhere to put the opera; there was no building in the big city where people would come to hear the music.

The story of the unusual project

Sir Eugene proposed that the state government build a music house in Sydney. Fascinated by the idea, Goossens secured a site for the opera and persuaded influential people in Australia to join the cause. They decided to build the opera house in Sydney’s Bennelong harbor, on the water, on the site of the streetcar depot, which had been relocated. The state government announced an international competition for the design of the musical house. 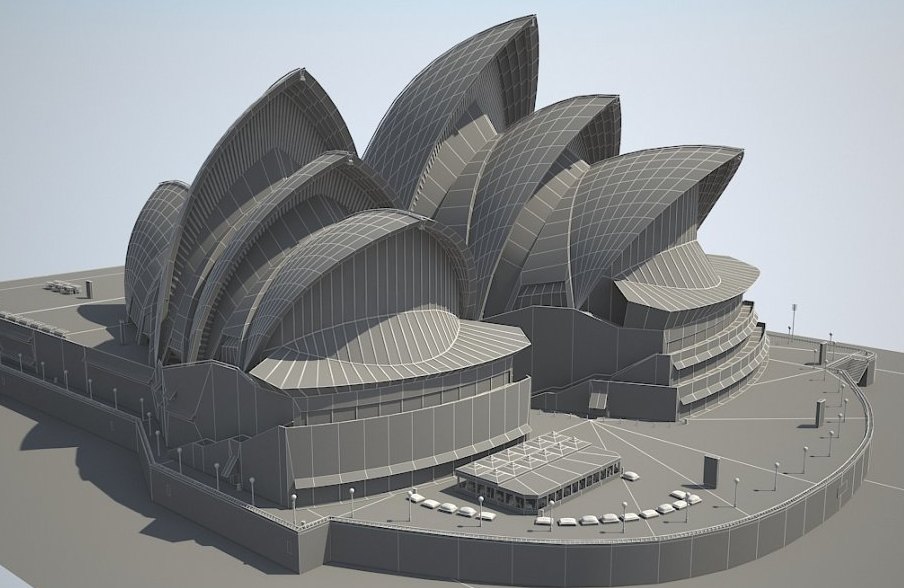 In December 1956 the jury, which considered 233 applications from 28 countries, rejected most of the designs and narrowed the field of applicants. The chairman of the jury, the American architect of Finnish descent Eero Saarinen, spotted among the rejected designs a “clear favorite”, the Danish Jorn Utzon, whose work he liked.

The architect, with his unbreakable authority, insisted that his chosen one win: the decision on the winner was not unanimous. On January 29, 1957 the winner of the competition was named – Jorn Utzon, who proposed to decorate the harbor with a building, resembling a ship sailing on the waves.

Opinion of Australians on the project

The Danish architect’s extravagant, expressive system of either shells or sails drew conflicting opinions from Australians. Some, admiringly, considered the theater a magnificent monument to a frozen melody; others were embarrassed by the shape of the roof, resembling huge oyster shells or wind-blown sails. 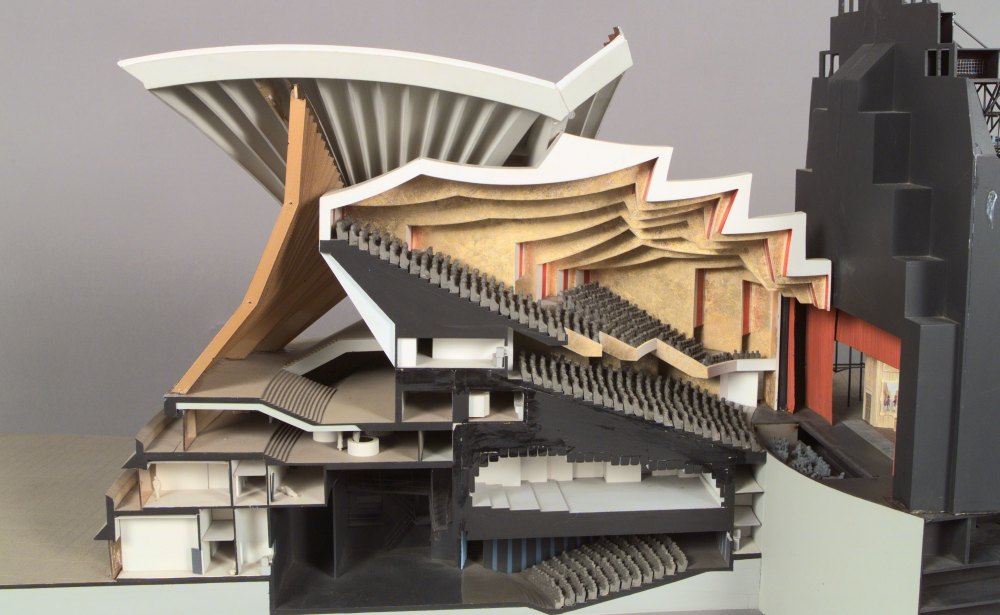 Some compared the roof to a beached white whale and nuns fighting over a ball. But no one doubted that the Sydney Theatre was a man-made symbol of Australia.

The Sydney Opera House is an example of expressionism in architecture. The building surrounded on three sides by water, with a roof in the form of sails of various sizes, from afar looks like a big ship moored in Sydney harbor. That was the architect’s idea for the future theater. He said that he wanted to take the audience away from the usual routine in a fantasy world of actors and musicians. 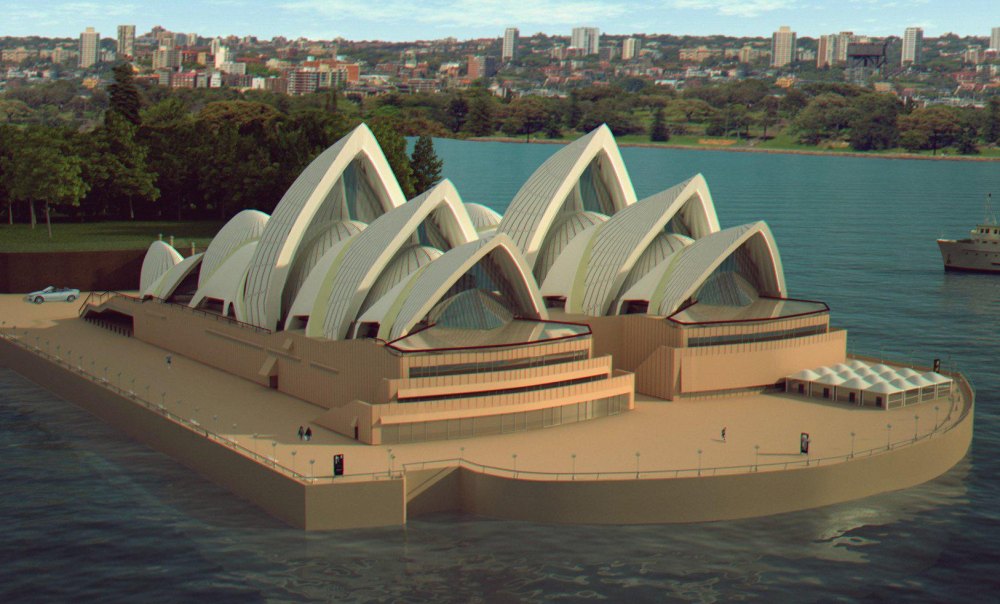 In 1959, at Cape Bennelong in Sydney, laid the first stone of the future theater, which was planned to be built in 4 years, having spent 7 million dollars. Behind the external light and airy building, which takes the audience to the land of music, hidden titanic work and huge investment. 14 years and 102 million dollars – that’s how much it really took to build an opera house.

Permission to build the theater was obtained in 1955 with a complete denial of budget financing, the money had to be collected through a lottery.

The construction of the unusual theater immediately encountered difficulties. The area for erecting the building was limited by water, and the Sydney authorities constantly interfered with the project. They demanded the construction of two additional halls, not originally foreseen. It was not easy to make such a non-standard roof – this had never been done before in the world. 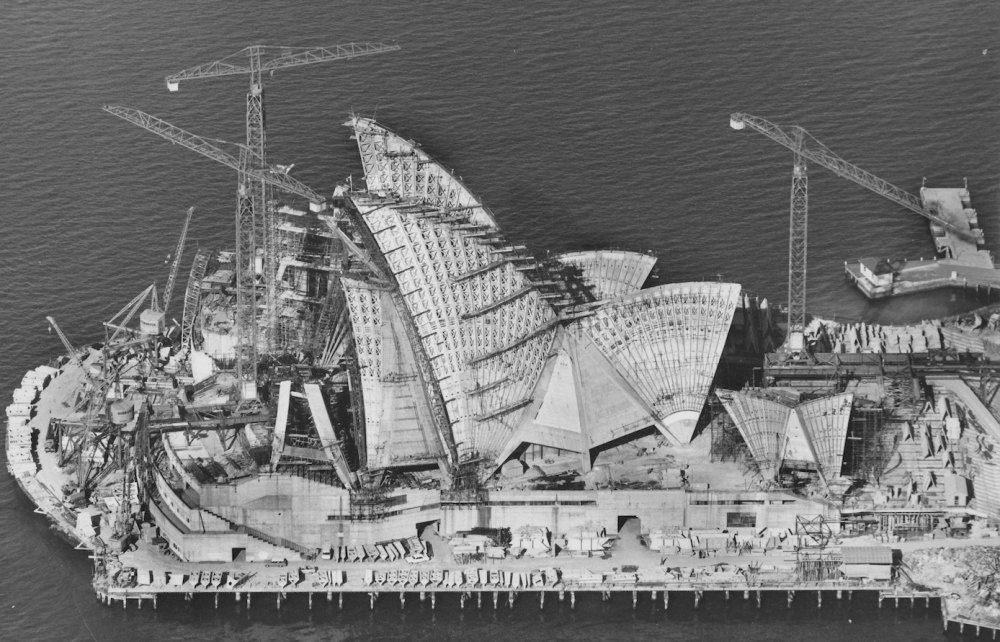 It took the architect years to find the right solution. The changes made during construction increased the weight of the building. The foundations built in the harbor of Sydney had to be blown up and replaced by new ones. The construction technology was costly and complicated – there were no floating lifting equipment. The materials for the roofing were delivered by special order from Europe. Each of the 2,000 fastened sections of the roof was made according to an individual sketch.

Due to the unevenness of the roof height in the building the acoustics could not be adjusted, so sound reflective suspended ceilings were made, which were absent in the project. It required additional costs, and construction was slow. The Labour Party, which supported the construction, lost power, and the proceeds of the lottery were used for road improvements.

The architect of the Sydney Opera House was accused of unprofessionalism and forced to give up the most important work of his career. In 1966 Utzon left Sydney forever. The construction was completed by young Australian architects led by architect Hall. 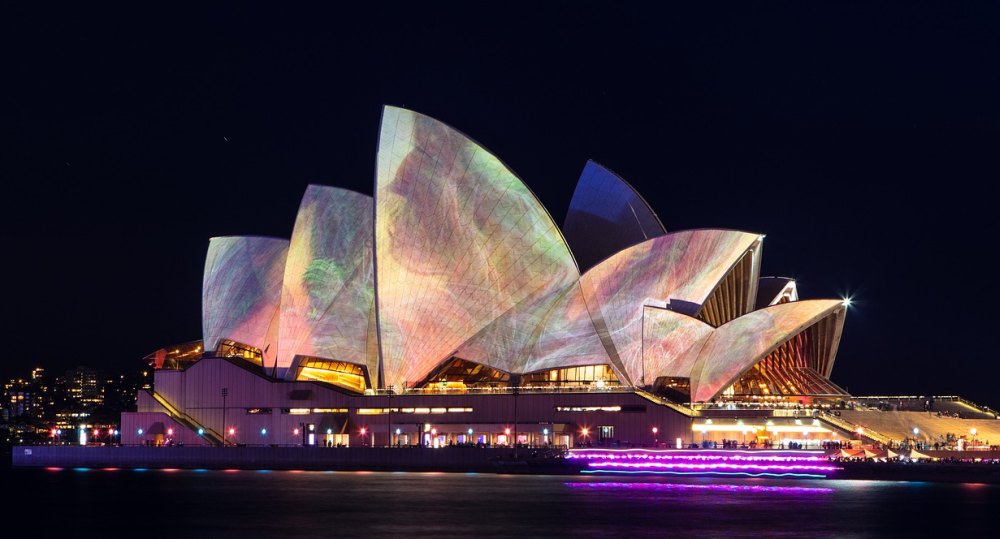 Interestingly, during the lavish opening ceremony of the theater in 1973, Utzon’s name was not on the list of architects who built the Opera House. In 2000, when Australia was preparing to host the Olympic Games, the Australians offered Utzon to come back and finish the work on the theater, agreeing to do whatever he said. The architect refused.

The architecture is a combination of lightness and massiveness

The Opera House in Australia showed a new way of looking at architecture. The 183 m long, 118 m wide building covers an area of 22 thousand square meters and stands on 580 concrete piles driven 25 meters deep into the muddy harbor floor.

The roof is 67 meters high and 150 meters in diameter and consists of 2,000 sections weighing 30 tons. The structure is secured with 350 kilometers of metal cables. 645 kilometers of cable were used to connect the theater with electricity. Above the two main halls are two large shells, the other sails over the smaller rooms. The surface of the dome is covered with 1 million glazed, pearl-shimmering white tiles. 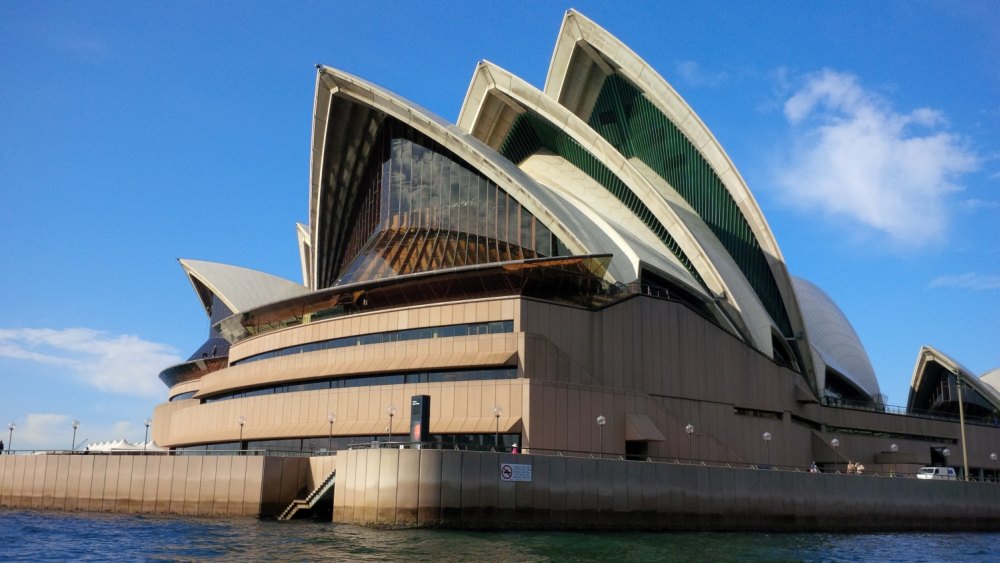 The massive building weighing 161,000 tons looks like a light sailboat. There are no decorations on the facade. The glare of the sun and the shifting clouds reflected in the tiles decorate the facade wonderfully during the day. The bright lighting at night turns the theater into a fairy-tale mansion. The interesting and unusual facade of the theater has been on the list of UNESCO World Heritage Sites since 2007.

The complex has five halls with a capacity of 5,738 people : 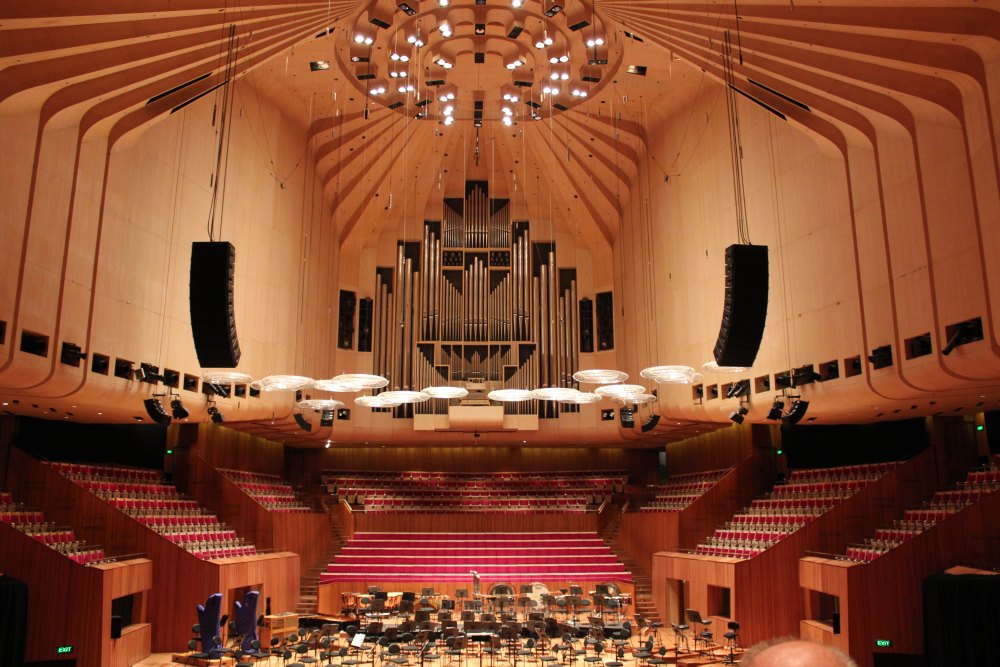 A total of 800 rooms in the building, with 2,200 doors leading to them. There are offices, auditoriums for rehearsals, four restaurants and six bars, as well as stores and studios. The building is multifunctional: the platforms of the opera house are open when festivals, concerts and performances of outstanding personalities are organized. In the small halls of the theater weddings and parties, lectures and exhibitions are held.

The theater complex is one of the twenty man-made masterpieces of the 20th century, the building is recognized as an outstanding construction of modern architecture. Despite this, the magnificent building of the Sydney theater inside is nothing special. Australians attribute this to the fact that the architect Hall, who is completing construction after Utzon’s departure, spoiled the look of the building. 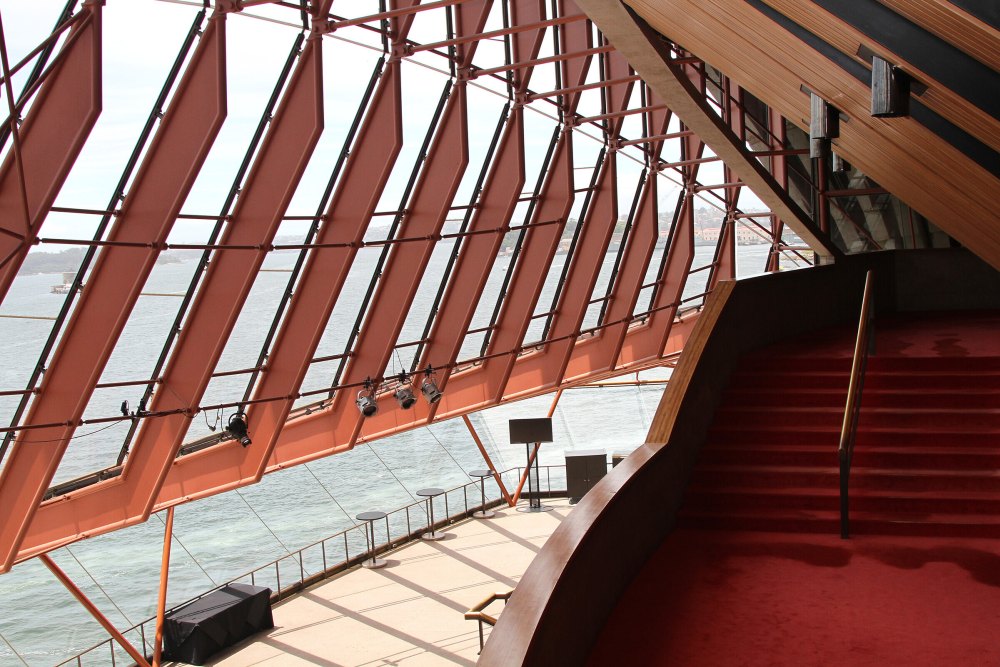 The rooms of the theater are finished in wood and pink granite. The interior has a vibrant color scheme in the “space-age Gothic” style. The intricate layout of the rooms is a source of ridicule for Australians, who remember an amusing embarrassment: a courier with a parcel, lost in the halls, came on stage during the performance.

The first performance was held on October 28, 1973. Fans of Russian music are proud that the first work staged at the Sydney Opera House was Sergei Prokofiev’s opera War and Peace.

The theater’s repertoire is not limited to symphonic music, performing everything from theatrical miniatures to film festivals. The program of the Sydney theater is constantly evolving and includes cabaret and comedy shows, children’s performances, theater and dance productions, as well as classical and contemporary music and films. 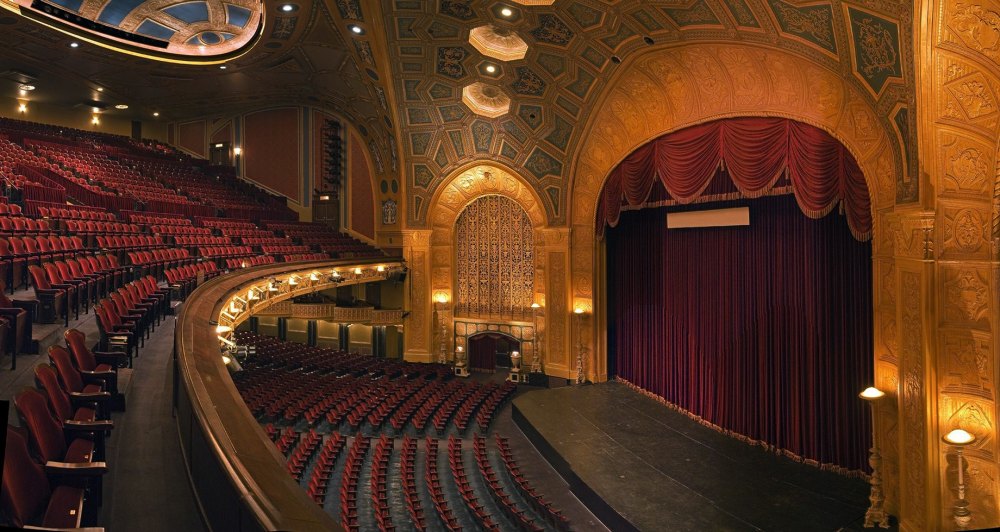 In step with the times, the theater offers digital creative learning, an introduction to Australian history and exclusive performances by talented artists and artists, musicians and politicians. The theater has social support and assistance for the visually impaired and deaf community – subtitles, a sound enhancement system and the option to walk with a guide dog. There are casual dining options, late-night dining and a children’s menu.

With 3,000 events and 2 million visitors a year, the theater’s digital recording strategy for televised productions attracts even more people. The best innovation was the construction of an outdoor stage on the shores of Sydney Harbor for shows and concerts. The number of tourists coming for outdoor photography cannot be counted. In-house tours are held during the day.