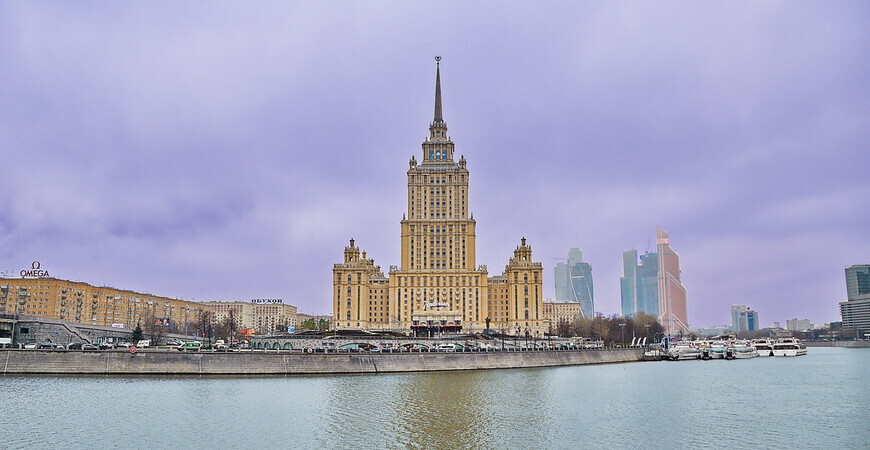 The building of the Hotel Ukraine in Moscow is an architectural landmark built in 1953 – 1957, the last of the seven “Stalinist high-rises”.

The high-rise on Kutuzovsky Prospekt is familiar to many tourists. Monumental construction is well visible from the Moscow River and the embankment of Taras Shevchenko . About 2 km from the building is the business complex Moscow City, and right opposite (on the Krasnopresnenskaya embankment) rises the Government House.

History of the Ukraine Hotel on Kutuzovsky Prospekt

The authorities of the capital thought of erecting skyscrapers back in the 1920s. Several proposals were considered, and in 1935 the project of the Palace of Soviets came to the fore. It was planned to build a grandiose building near the Kremlin, and even the Cathedral of Christ the Savior was demolished for this purpose. However, the war soon broke out and the project was frozen.

In the postwar years the government returned to the idea of building high-rise buildings. In 1947 ministers approved a document according to which in the next few years eight skyscrapers were to appear in Moscow. Seven of them managed to be realized, today these houses are known as “seven sisters”, they are considered to be architectural dominants and symbols of the capital.

“Stalin’s high-rises” were a real challenge for Soviet engineers and industry. At the end of the 40s there was no technology in the country to build tall buildings, and of the architects only a few had studied abroad and had the necessary knowledge. When the first houses were built, new production and construction equipment appeared in the process of the works. Because the Ukraina Hotel was the last one to be erected, the workers already had experience and most of the operations were mechanized, which made the process much easier.

The opening ceremony of the Ukraina Hotel took place on May 25, 1957. The hotel was considered very prestigious and mostly welcomed foreigners: diplomats, participants of different festivals and contests, musicians and artists.

Like other high-rise buildings, the Ukraina hotel consists of a central building and side ones. The central tower has 34 floors – it houses the hotel. The side buildings have less storeys – from 9 to 11. There are 2-4-roomed residential apartments in them.

The building is an outstanding example of the “Stalin Empire” style. The exterior of the building is faced with granite, limestone and ceramic tiles; the towers are decorated with vases, stucco in the form of ears of wheat and sickles, the spire is crowned with a five-pointed star. A team of artists worked on the interiors of the hotel “Ukraine”. Hundreds of works of art have survived in the halls.

Art collection and diorama of Moscow

The collection of paintings in the hotel “Ukraine” has 1256 canvases. Among them are works by A. Deineka, the Kukryniksy group, D. Nalbandyan, V. Polenov and other masters. The sculpture collection includes 57 specimens of marble, porcelain, bronze and plaster. The sculptures are partly preserved from Soviet times, and partly were restored or re-cast during the reconstruction. The sculptures depict famous people such as Alexander Pushkin, Anton Chekhov, Sergey Esenin, Mikhail Kutuzov and so on.

Inside the hotel “Ukraine” there is also a picturesque plafond “Holiday of labor and crops in the hospitable Ukraine” and a diorama of Moscow.

The 10-meter plafond was created in 1957 specially for the decoration of the skyscraper. The authors – A.Gavrikov, I.Vainman, Ch. Akhmarov – depicted agricultural and industrial workers with tools and fruits of labor in their hands.

The Moscow diorama is a 97.5 square meter painting depicting the central part of the capital (from the Sofiyskaya embankment to the Luzhnetskaya embankment). The artists succeeded in conveying the smallest details, which was highly appreciated at exhibitions in New York and European cities. The diorama is open for tourists, everyone can admire Moscow 1977, listen to an interesting story with an audio guide and watch slides.

In 2005 the hotel “Ukraine” was privatized by LLC “Biscuit”. Till the spring of 2010 the company effected a global reconstruction of the building: a part of the rooms were united and re-planned, communications, plumbing and furniture were replaced, fitness center was organized in the basement.

The exterior of the building was not damaged and the lobbies, lobbies, public spaces and restaurants preserved their historical image. It is noteworthy that the name “Ukraine” is still in use, although officially the hotel is called Radisson Collection Hotel Moscow.

The imperial style and high service made the hotel one of the most luxurious in Moscow. The list of famous guests is full of star names: Robert De Niro, Ronaldo, Cristiano Ronaldo, Francis Ford Coppola, Marcello Mastroianni, Audrey Tautou, Sophia Loren and many others.

There are over ten restaurants and shops on the territory of the Ukraina hotel. They are: Lobby Bar, Veranda Restaurant serving buffet breakfasts, Club Restaurant (only for guests from 10-11 floors), Italian Restaurant “BUONO”, Karaoke “Troubadour”, “Mercedes Bar” with European and Japanese cuisine and several high-level restaurants with Chinese, Russian, Mediterranean, Georgian dishes, steak-bar.

On the first floor, where the 1977 Moscow diorama is located, there is a shopping gallery of 25 boutiques. They sell jewelry, Italian clothes and shoes, carpets, leather goods, luxury perfumes, watches, optics, fur, works of art, etc.

Another place that attracts tourists to the hotel “Ukraine” is the observation deck on the 33rd floor with 360° panorama. From the height of 120 m you can see skyscrapers of Moscow City, domes of the Christ the Savior Cathedral, Kievsky railway station, Vorobievy Hills and other sights.

Observation deck is open all year round. The ticket costs 1000 rubles (adults), 500 rubles (children from 6 to 14 years). The entrance is free for hotel guests and some restaurants. Children under 6 years old, pensioners and veterans can also pass freely. For details, see the official website of the hotel “Radisson Collection Moscow”.

Motor ships from the Hotel Ukraine

Near the hotel “Ukraine”, near the embankment of Taras Shevchenko, there is a pier. All year round motorboats from the Radisson flotilla depart from it with restaurant service and excursion service.

A walk along the Moskva River includes a tour of architectural monuments, bridges and parks. The route runs from the business center “Moscow-City” to the Novospassky monastery. You can book a trip through the hotel website and on the phones of the cruise company.

Exactly 60 years ago, on May 25, 1957, the hotel “Ukraine”, now the five-star hotel “Radisson Royal, Moscow”, opened its doors to its first guests. One of seven skyscrapers, second highest after Moscow State University, the hotel has always stood out among other hotels in the city.

Today, on the hotel’s anniversary day, we suggest looking at old photographs, visiting the hotel’s most prestigious rooms, as well as going up to the very top and admiring the views.

At the end of the 1940s Intourist starved for space the National Hotel, and it was decided to build a new hotel together with all the high-rise buildings on the then prospective thoroughfare Mozhaiskoye Highway, the government road going in the direction of the state summer residences. Until 1957 this part of the highway was called Novodorogomilovskaya Street, and there was no bridge directly in front of the hotel.

As you can see from the photo, the hotel building was built a little later and longer than other high-rise buildings, from 1953 to 1957. The location of the high-rise building, in a bend of the river with unstable ground, was a big problem for the builders. The 34-storey building had to be erected on a concrete monolith going 9 meters underground and the water had to be constantly pumped out of the pit.

READ
Bali's top 7 attractions: the main natural and architectural wonders on the "island of the gods"

Originally the hotel was called Dorogomilovo, but it was completed under the reign of Khrushchev and in 1954 the 300th anniversary of the reunification of Ukraine and Russia was celebrated, so it was decided to call the new hotel Ukraine.

Photo from 1961. The hotel welcomes delegates of the First World Forum of Youth and Students in the struggle for national independence and liberation. In the foreground is a Renault Dauphine with Parisian license plates.

The lobby of the Ukraina Hotel in the late 1950s.

Let’s walk through the modern interiors of the building:

View of the lobby from the doorway:

Now one of the city’s most fashionable hotels, this is also the official Rolls-Royce showroom in Russia:

The ceiling is painted with the coat of arms and flag of the Ukrainian SSR, peasants, miners of Donbass, scientists, students, musicians. Even the flag of Dynamo Kiev, in those years an incredibly popular team far outside Ukraine, had its place.

A bit of parade interiors:

A separate attraction of the hotel is a diorama of the Kremlin and the city center from the 1970s:

The diorama, titled “Moscow – Capital of the USSR,” was originally made for the 1977 National Exhibition in New York, where it was a resounding success, after which it was taken to various international exhibitions for three more years, after which it was exhibited at the VDNH in the 1980s and then sold into private hands; in the 1990s it was exhibited for a while in a shopping center in Novye Cheremushki. Collectors from Japan and the USA were interested in purchasing the diorama, but fortunately they bought it for the Ukraina Hotel.

But let’s go up to the rooms:

This is not the hotel lobby, this is the lobby of the Presidential Suite, the hotel’s largest room.

The living room of the Presidential Suite has an “electronic” grand piano, which can play (and press the keys) without the help of a musician.

The suite has two large bedrooms. The guest room:

The bathroom-room has a great view of the White House:

Interesting detail: Instead of cardboard “Do Not Disturb” and “Please Clean Room” signs, they use dainty tassels, which hotel staff say are often taken as a souvenir:

Let’s go upstairs to the foot of the spire:

The White House and the high-rise at Barrikadnaya

The Kremlin, the high-rise building on Kotelnicheskaya Naberezhnaya (see our separate publication with views from there),

Europe Square and the former Circular Railway Bridge, relocated to Kievsky vokzal and turned into a pedestrian bridge

MFA high-rise in the process of reconstruction of the spire

And the view of the City from the hotel “Ukraine”, which has already become a classic:

And a bonus, a view of the “Ukraine” Hotel from the City:

This entry was posted on Thursday, May 25, 2017 at 9:17 pm and is filed under CITY, Soviet Architecture, Old Town. You can subscribe to comments on this entry via RSS 2.0 .