Holidays in the Falkland Islands

The Falkland Islands lie in the South Atlantic, about 500km from South America. They consist of two main islands and several hundred smaller ones.

It is thought that Europeans first saw the archipelago in 1592 but the first landing took place almost 100 years later, in 1690. The first settlement was not established by the French until 1764. Since then, the islands have been the subject of territorial disputes, first between England and Spain, and later between Britain and Argentina. For the last 200 years the islands have been under British control.

In April 1982 an open conflict between Britain and Argentina began. Argentina landed its landing on the islands, and seven weeks later the British brought their expeditionary force here. Two months later the Argentines were forced to surrender. But to this day, successive governments continue to claim sovereignty over the archipelago.

The archipelago’s islands are dominated by a hilly landscape of swamps and cliffs. Peat is found here, which often causes prolonged fires. The deeply indented coastline provides good natural harbors. The highest point on the islands is Mount Usborne, 705 meters high, named after Darwin’s assistant.

Climate in the Falkland Islands

The Falkland Islands are in a temperate climate zone. Strong westerly winds often blow. The south-eastern part of the archipelago receives far more rainfall than the outer western islands. The average annual temperature is about +5-6C, varying from +9C in summer (January and February) to + 2C in winter (June-July). Snow is not uncommon in winter, although it melts rather quickly. 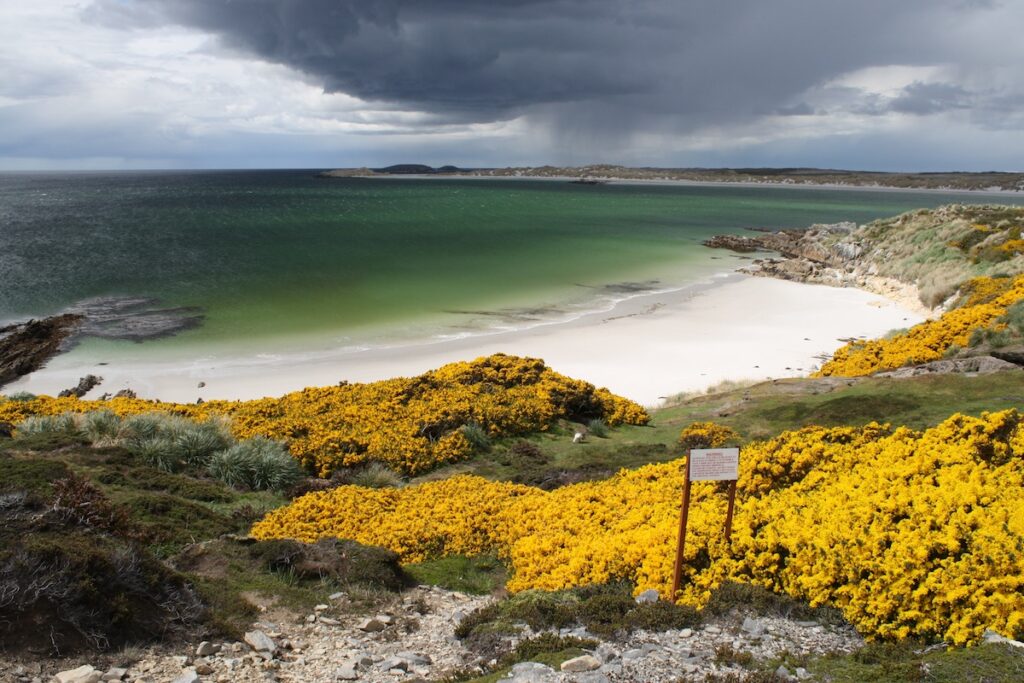 Climate in the Falkland Islands. 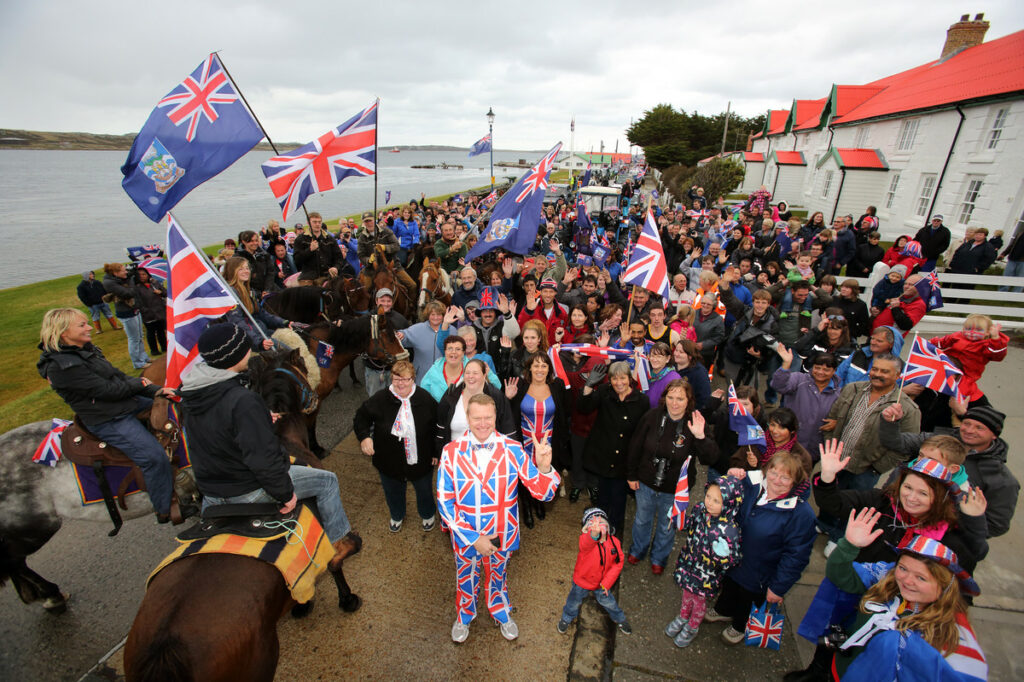 Residents gather in Stanley, Falkland Islands on Monday, during a referendum intended to show the world that they want to remain British amid increasingly tense relations with Argentina. Falkland Islands economy

Most international flights land at Mount Pleasant airport, which is also a British military base. It is used only by international carriers such as LanChile for its weekly flight (from Santiago de Chile), Rio Gallegos (from Argentina) and the British Royal Air Force. Most arrivals must have a visa as well as a return flight ticket and proof of accommodation and necessary funds. This does not apply to cruise passengers – they can go ashore during the day, but must spend the night on the ship. 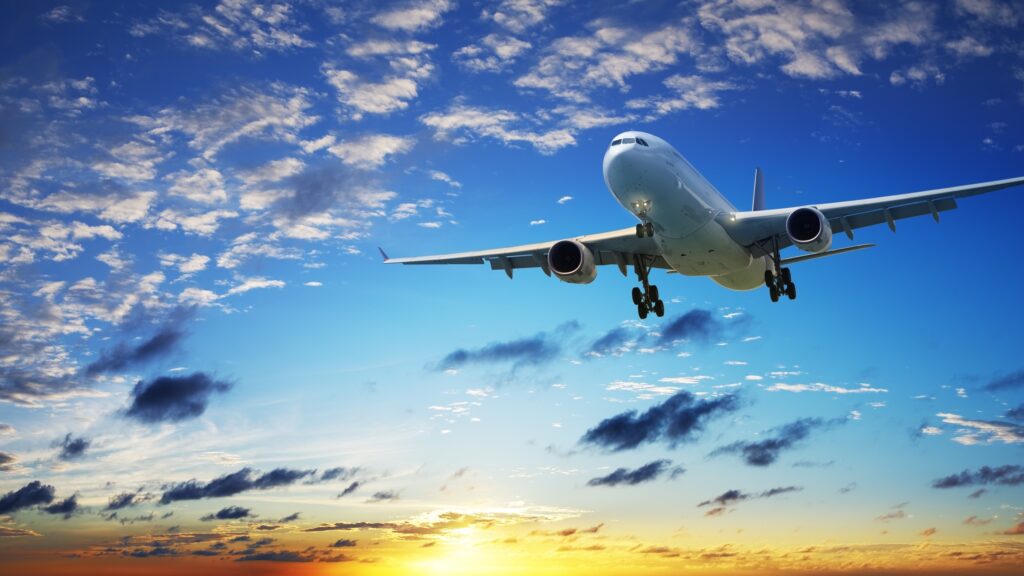 The best time to visit the Falkland Archipelago is from November to March. Tourists come here to see their rich natural beauty, which they take great care to preserve. The Falkland Islands are particularly well known for their abundant bird and sea life. There are several species of penguins and albatrosses, ducks, geese, hawks, falcons, dolphins, whales and porpoises. 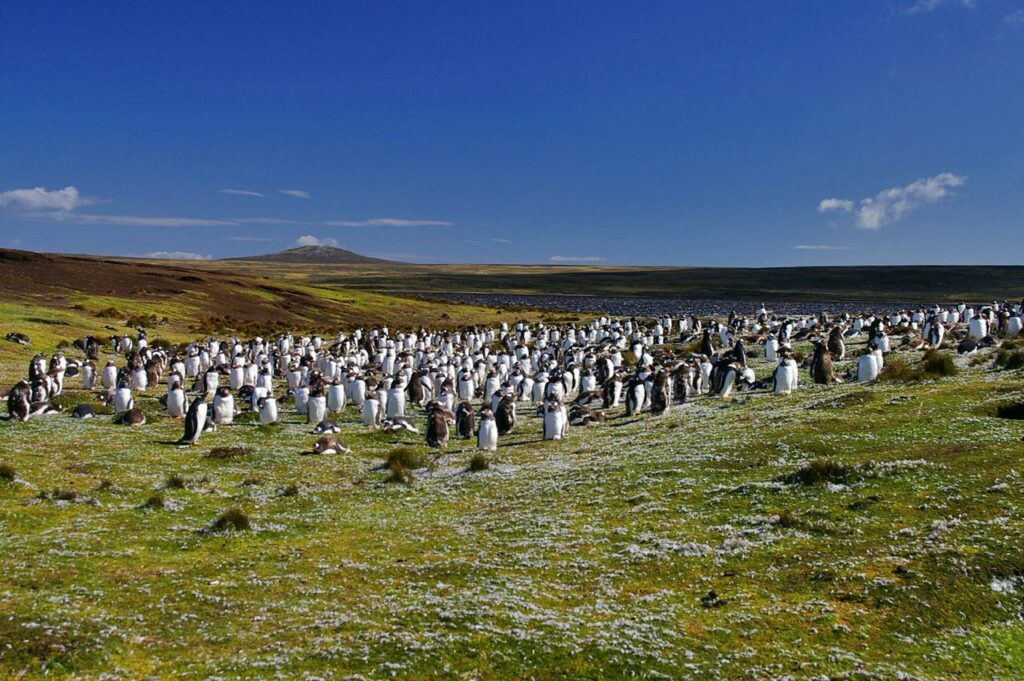 Opportunities for outdoor activities and great – it is a hike to see the beauty of nature, look at the farms where the locals are engaged in sheep breeding, produce a variety of cheeses, wool products. In addition, you can try rock climbing, windsurfing, horseback riding, fishing and try to catch a huge tuna, play golf on the endless fields. Particularly popular is the observation of the world of birds – trips to nesting sites are organized, during which you can take many unique photos.

History lovers will be interested to see the various memorials, because the Falkland Islands were the place of armed conflict between the two powers – Argentina and Britain.

Cooking in the Falkland Islands

The Falkland Islands are mostly dominated by traditional British cuisine like fish and chips, roast beef, lamb and tea. There are also Spanish influences, such as the Milanese chop and the thick cazuela broth.

Tourism in the Falkland Islands

This archipelago of more than 700 islands, almost 500 kilometers from the southeastern tip of South America, attracts mainly lovers of rural and ecotourism.

BiletyPlus.ru has selected for you the main attractions of these distant islands.

First of all, tourists are very interested in local landscapes and wildlife, the preservation of which on the islands is given exceptional attention. It is forbidden to collect flowers and shells, to feed wild animals, to block their migration paths with machinery, to disturb nesting places, to approach animals and birds more than 6 meters. And for permission to cross the farmlands (and they are vast here) it is necessary to ask the local landowners. The flora of these hilly islands is not very rich due to the harsh climate. However, the strange forms of the local vegetation, shaped by the constant westerly winds, as well as the endless heathlands and picturesque meadows, are a curiosity for tourists.

The main pride of the archipelago is the large nesting grounds of penguins of different species, where numerous hikers and car tours head to with cameras. Such bird colonies can be seen at Gypsy Cove, Rockhopper Point, Sea Lion, Sanders Island and Grand Malvinas Islands. Almost every island of the archipelago is a prime location for observing other seabirds: albatrosses, cormorants, skuas, swans, herons, gulls… Carcass Island is especially famous among birdwatchers from around the world.

In addition, the islands are a paradise for lovers of watching orcas, dolphins, harbor seals and lions. Colonies of the latter are especially large on Sea Lion Island and East Falkland’s Volantir Beach. And the incredible transparency of the atmosphere makes New Island one of the world’s best places for stargazing.

A must on any tourist trip to the islands is a visit to the camps, the rural settlements. Here you can observe the work of local people (sheep breeding is the basis of the economy of the islands), taste cheese and milk, buy wool products, and live on a farm for a few days.

Many come to the archipelago to see with their own eyes the battlefields, ruins, museums and memorials – the legacy of the armed conflict in the late twentieth century between Argentina and Britain for the local rule. The capital of Stanley on West Falkland Island, with its brightly painted wooden houses, traditional English lawns, Caristechurch Cathedral, island museum and governor’s residence, is worth a visit. The oldest buildings are in Port Louis, which was founded in the 18th century. It’s also where you’ll see the wonderful scenery, called “local Scotland”.

When it comes to recreational opportunities, the Falkland Islands are ideal for lovers of fishing, climbing, trekking, windsurfing and horse-riding.

Catching fish is almost a favorite activity of local residents, as well as an excellent “bait” for tourists The surrounding waters are full of excellent potential trophies – tuna, mullet, trout. The Marell, San Carlos, and Huarra rivers, as well as Port Howard and Hill Coves, are the best-known fishing spots. The fishing season runs from September to April, and the best times to catch trout are March and April.

The most scenic hiking and horse trails on the islands are great, so hikers have a lot of fun and get to know the scenery. Volantir Point and Seal Bay on the north coast of East Falkland, where rocky headlands alternate with wide sandy beaches and endless meadows, are the best hiking trails.

READ
The most beautiful natural wonders in the world

Windsurfing is best done in the sheltered waters of Falkland Sound and Stanley Harbor. A local attraction for extreme riders are the “gray beards,” the harsh and powerful winter waves that crash on the coast. And tourists will also be interested in participating in one of the many local festivals and holidays. The most important and largest of them is the annual winter Parade of sheep with competitions of shepherds, shearers, riders and even shepherd dogs.

As you can see, tourism in the Falkland Islands is very diverse and certainly beckons travelers with its “edge of the world” exoticism.

Become an author! Tell us about interesting events and facts. Share hot news. Send your article by e-mail and after moderation it will be posted on our portal.