The small and picturesque island of Thassos (Greece) is located in the north-east of the country, in the Aegean Sea. It is the northernmost and greenest Greek island, covered with forests, oak groves, chestnut and plane trees. Thassos has an area of 380 km² and a permanent population of just over 14 thousand. It is possible to visit the entire island in just one day. 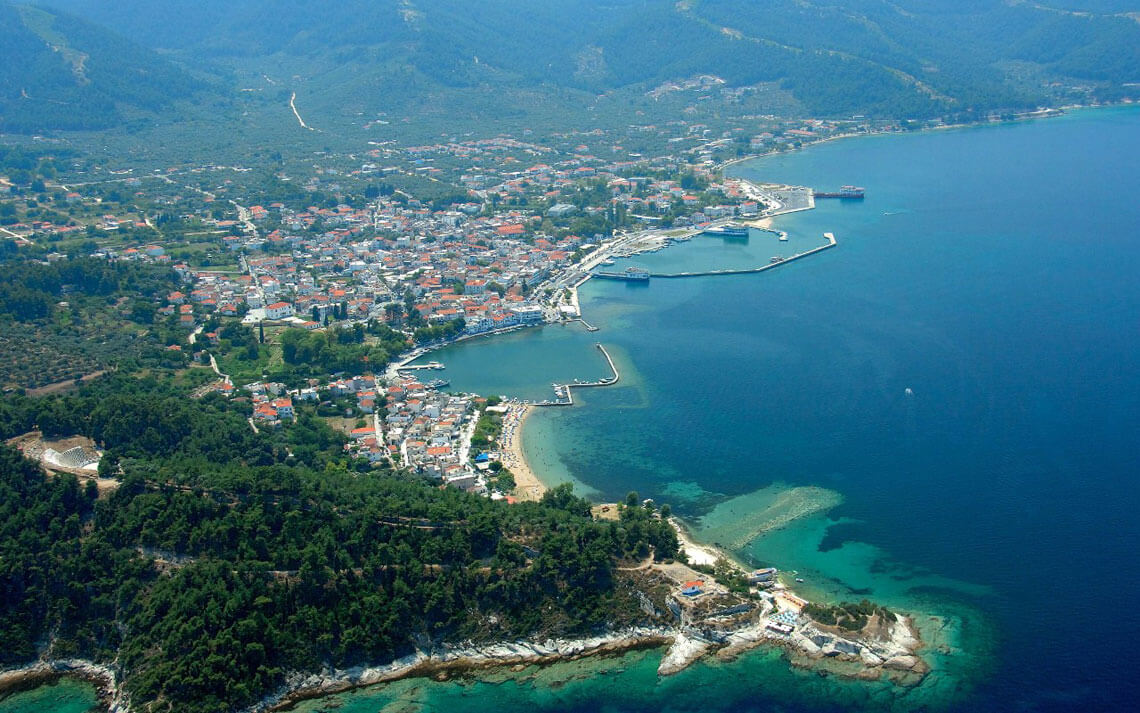 A tranquil atmosphere reigns in this harmonious place with its vivid scenery and ancient sights. The island will appeal to those who love silence, picturesque nature and history. If you prefer a quiet and informative vacation, you will be comfortable here.

There are not many Russian tourists on Thassos: probably because of the remoteness of the island from the nearest airport in the large city of Thessaloniki, where regular flights from Moscow fly. To get to the island, you must first take bus 78 to the bus station and there change to a regular bus to the port cities of Keramoti or Kavala (the ticket costs 15 euros). The distance of 130 km may be covered by a rental car. 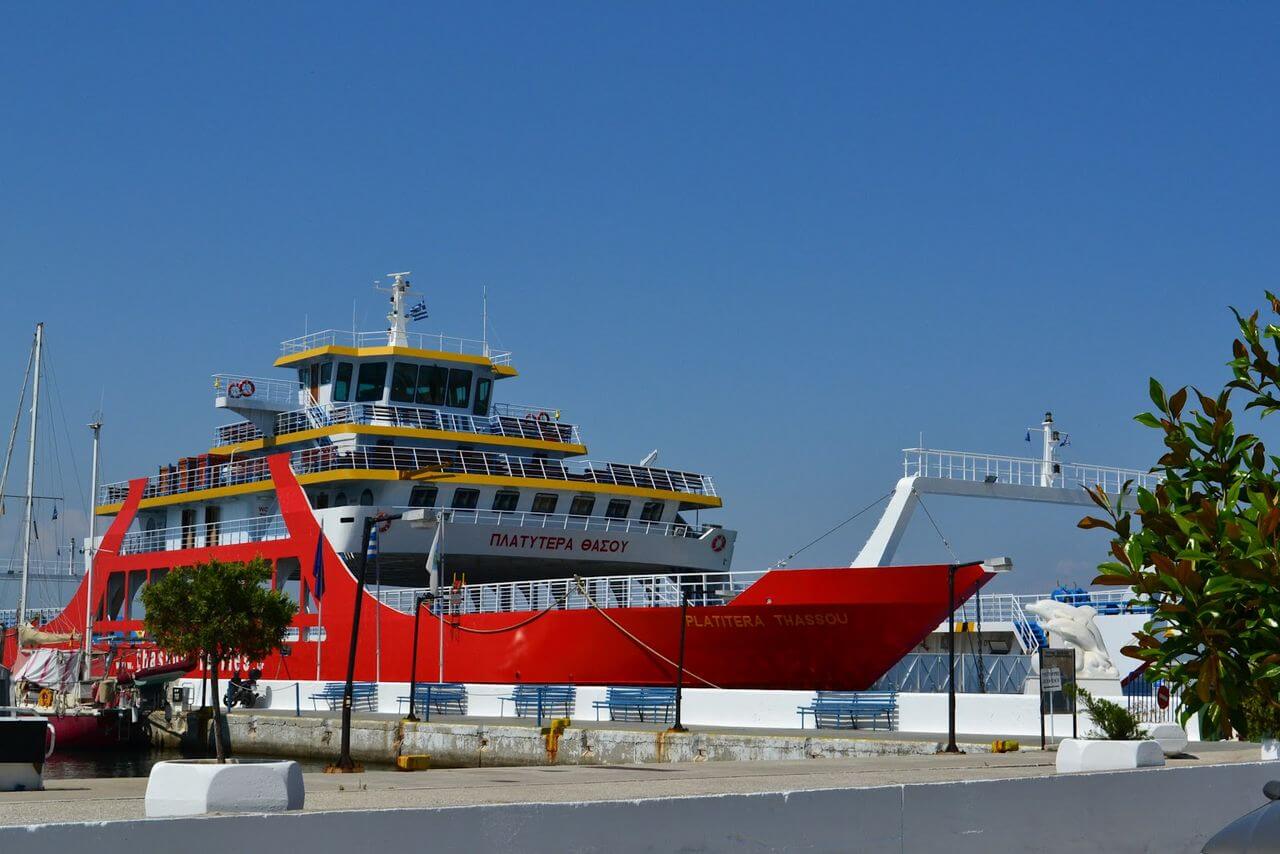 Then take a ferry. From ancient Kavala, the ferries go to the port of Prinos, from Keramoti to Limenas, the island’s capital. The time of transfers differs in 2 times – 1,5 h and 45 min respectively. For tickets from Keramoti you will need to pay 4 euros (adult) and 2 euros (child), from Kavala – 6 and 3 € respectively. A rented car can also be transported to the island for an additional fee of 18-19€. Up-to-date ferry schedules and ticket prices can be found at http://thassos-ferries.gr/ (there is a Russian language version), but tickets can only be purchased at the company’s ticket office shortly before departure.

The isolation of the island creates certain inconveniences for travelers, because it is impossible to get to it without transfers. But thanks to this Thassos is a quiet place with unspoiled nature.

READ
What to see in Utrecht, Netherlands?

Villages and attractions on the island

Ancient temples, snow-white beaches and picturesque mountains, groves and atmospheric settlements are all in harmony with each other. Although the island is small, you’ll have plenty of choices for what to see on Thassos and where to take beautiful photos. 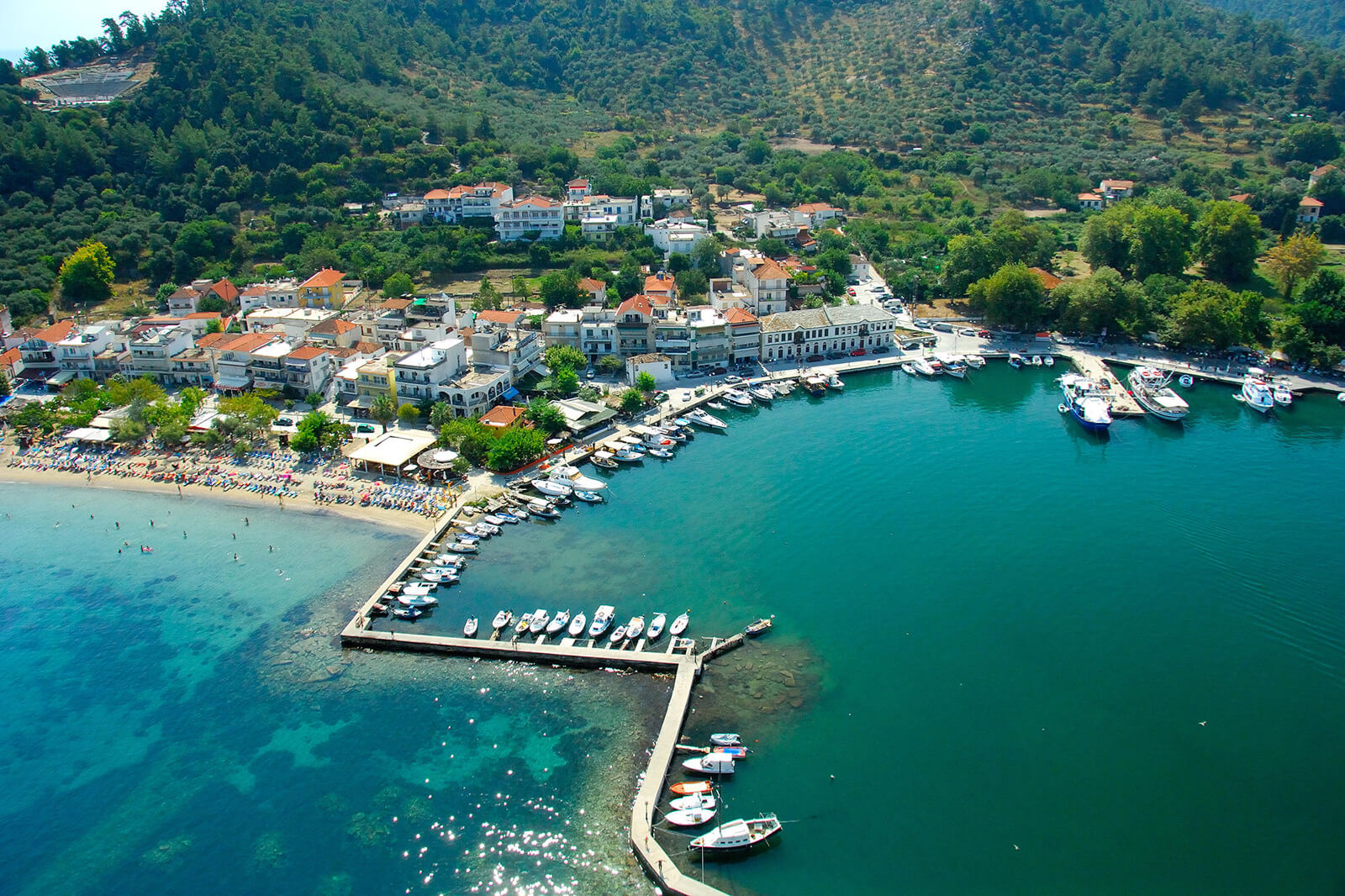 Limenas is the ancient capital of the Greek island, where most of the architectural sights of Thassos are concentrated. The city is surrounded by ancient walls that are more than two kilometers long. Fragments of the walls are in good condition. In the center of Limenas, visit the ancient market square, one of the best preserved ancient sites on this island of Greece. Also in the small square of the capital city are: 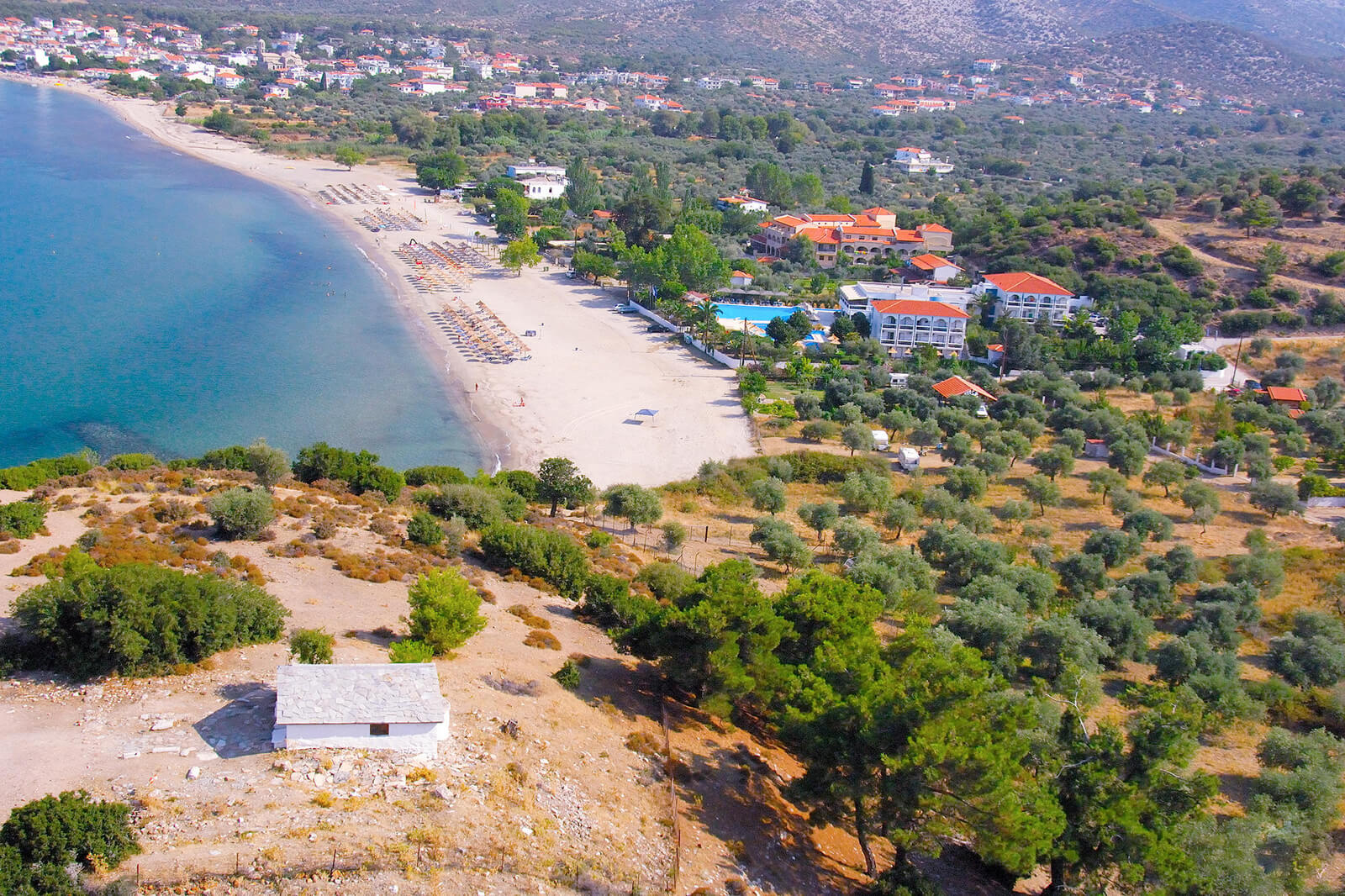 Originally it was a fishing harbor with no permanent population. Only a few years ago the village became a lively resort with well-appointed but sparsely populated beaches with azure waters, clear even in the most popular tourist months.

Cars in Potos drive only on a couple of streets: most of Potos is for pedestrians. The cozy streets are filled with restaurants, cafes, bars and clubs. In the evening you can sit down in a restaurant on the shore and watch the beautiful sunset. When the weather is good the famous Mount Athos can be seen from the banks of Potos. Detailed information about the mountain is presented in this article. 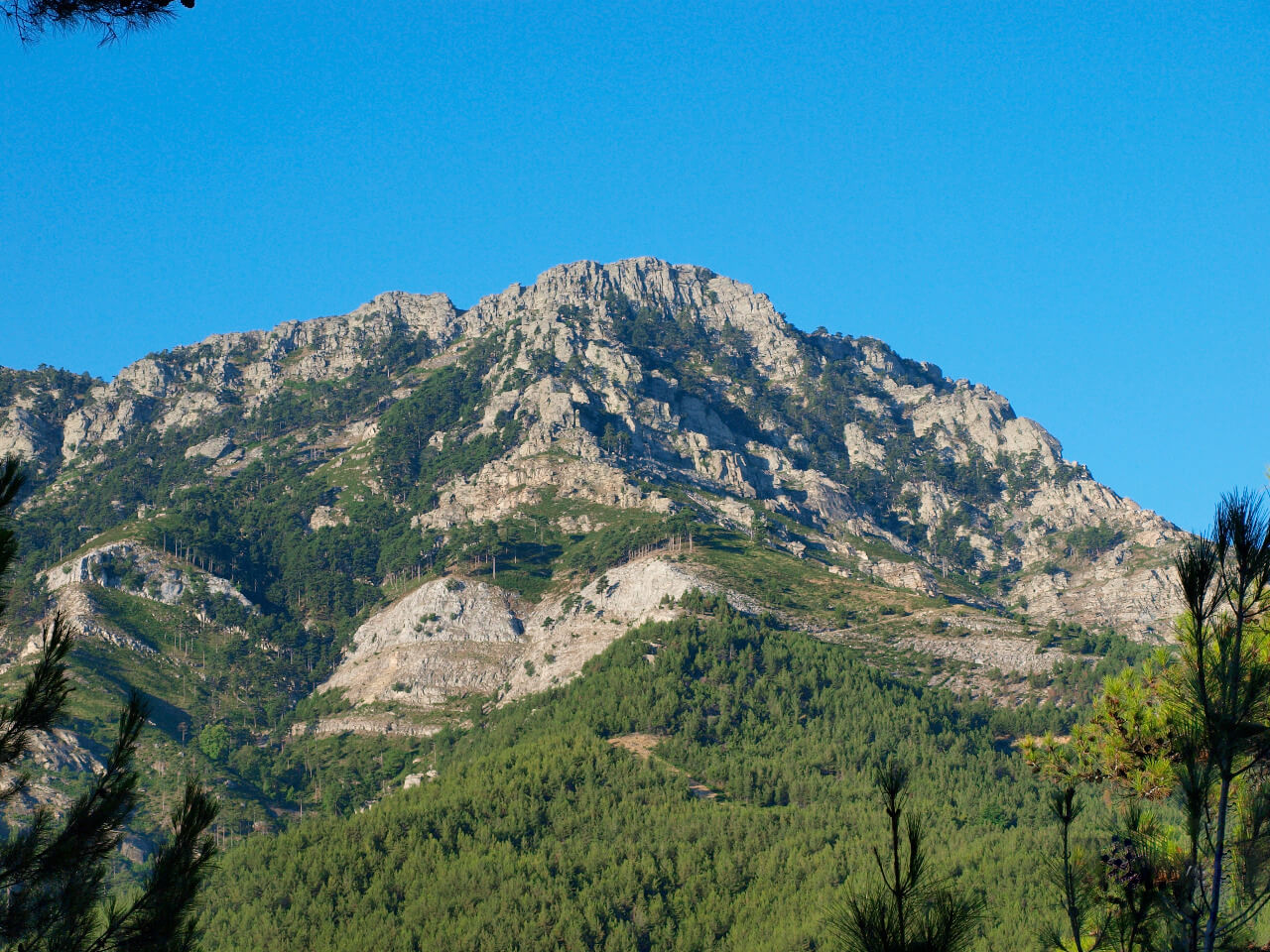 The highest point of the island is Mount Ipsario. Its peak reaches a height of 1200 m above sea level. The mountain is covered with green trees and its slopes offer a gorgeous panorama of the island and the coast. To admire these views, go up to the village of Potamia on the mountainside. Here you can not only enjoy the beautiful scenery, but also visit the museum of Greek sculptor Vagis.

READ
Where to spend the summer vacation? Rest in Russia and foreign countries 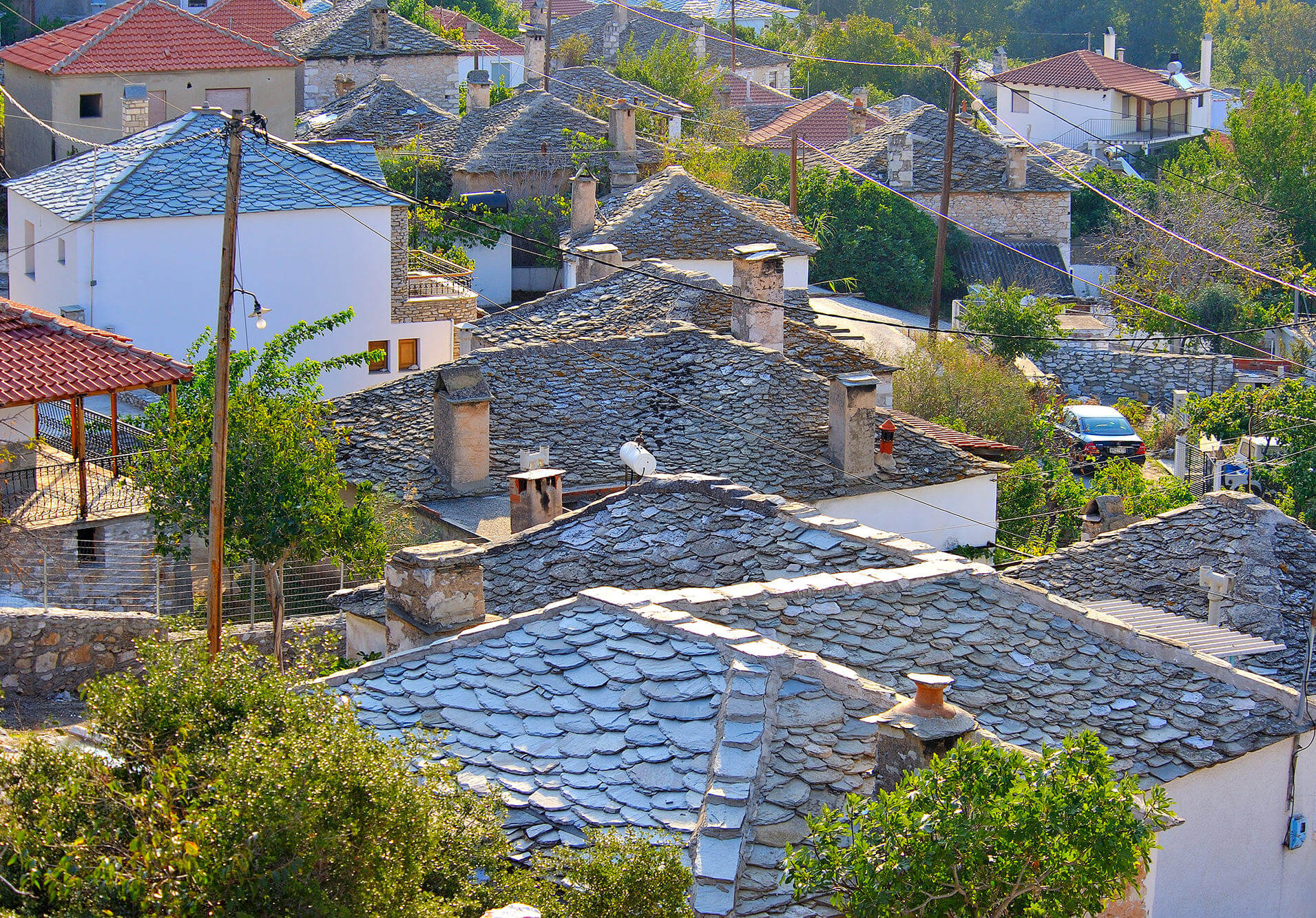 At 10 kilometers from Potamia lies the mountain settlement of Theologos, which used to be the capital of the island. It is one of the most colorful attractions of Thassos in Greece. There are many restaurants with national cuisine and an ethnographic museum in the town. But the main local pride is the ruins of the ancient city of Istanio. 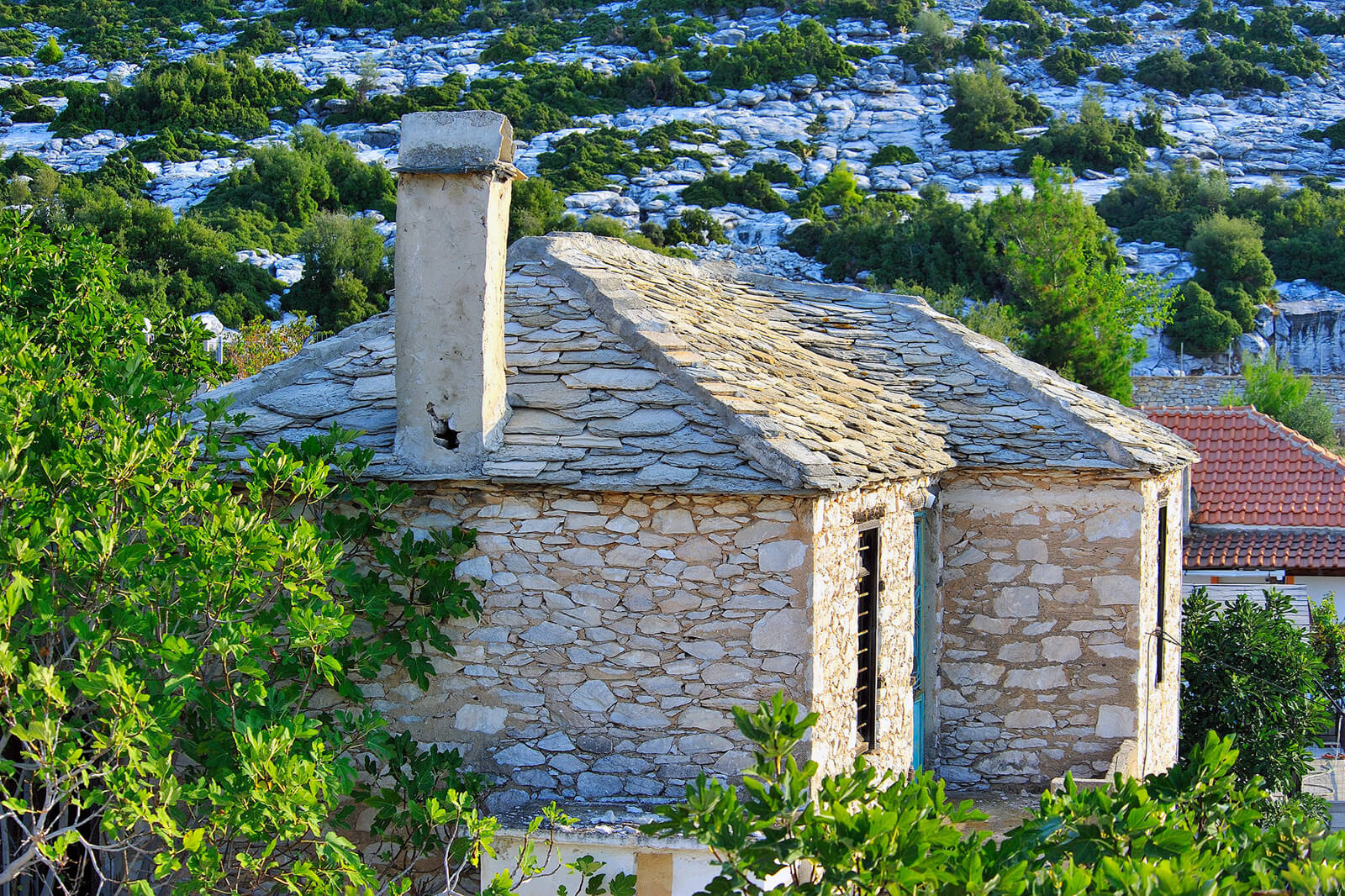 The ancient center will not leave indifferent photo lovers: narrow streets and attractive houses with tall windows are a sample of traditional Greek style. To spice up your stay in Theologos, you can visit the secluded beach, which is particularly appreciated by windsurfers, because the wind blows almost all the time.

Take a note! Which resort to choose for a holiday in Halkidiki in Greece – read here.

This historic village on the shores of the Thracian Sea is a must visit for lovers of cognitive, intellectual vacation. Here you will enjoy not only the beautiful beach and nature, but also the ancient sights. The real pearl of Alika is the ruins of an ancient temple with preserved ancient inscriptions. 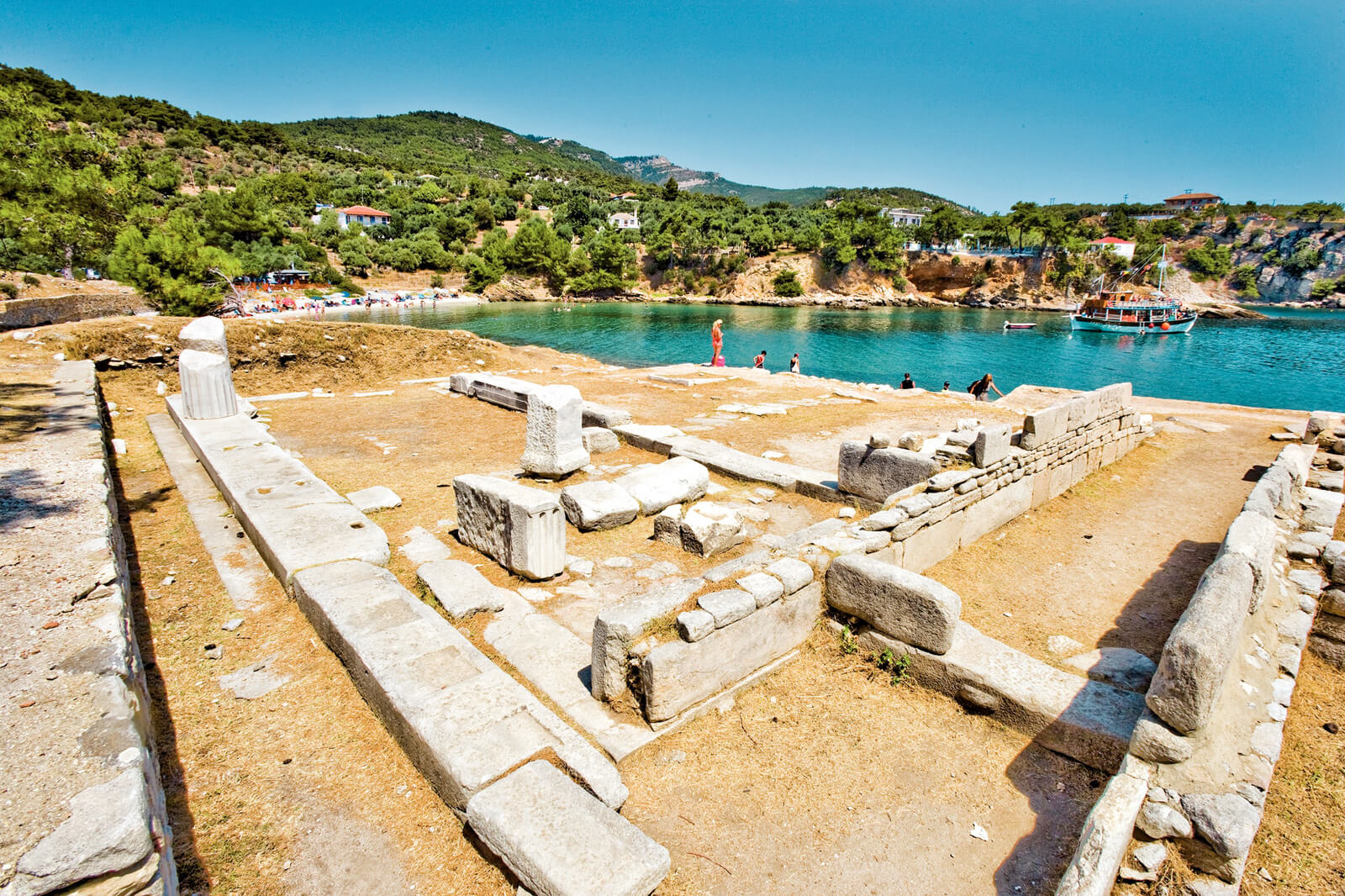 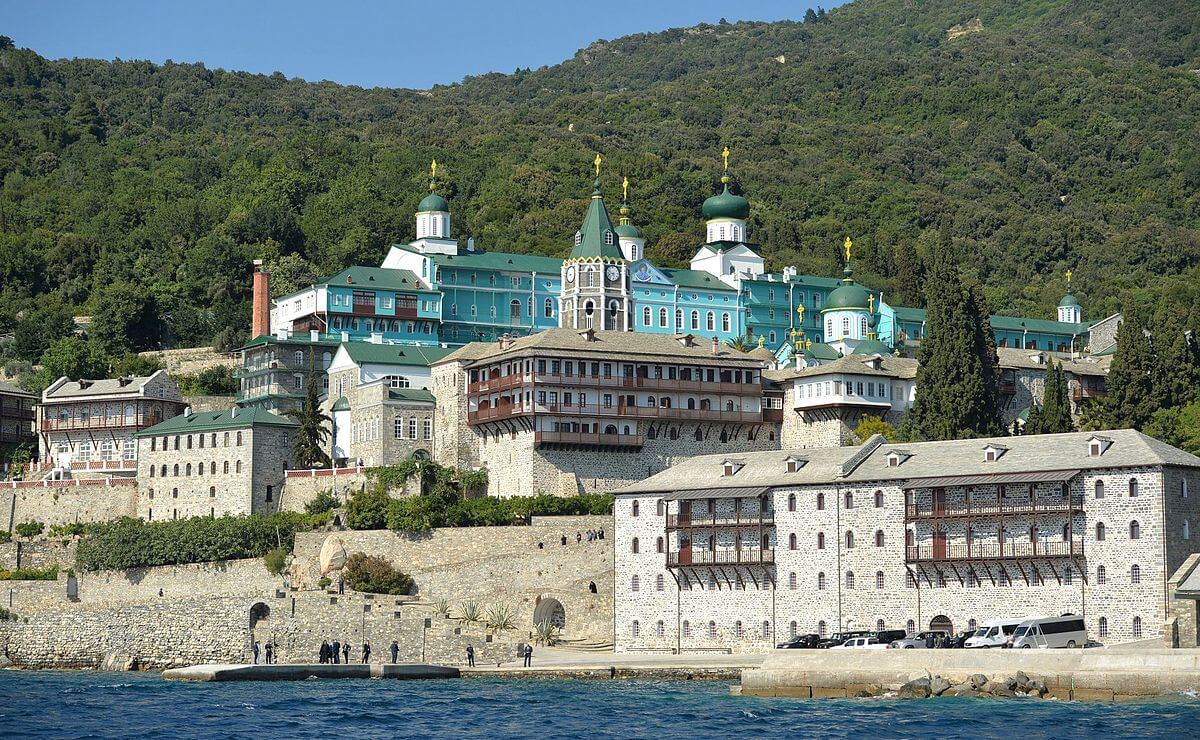 Near the village of Kazaviti, in the interior of the island, there is one of the main attractions of Thassos, the Monastery of Panteleimon, which was built in the first half of the 19th century. The building was built in stone and the roof was made of wood and covered with slate. Near the monastery there is a cave, in which, according to legend, lived St. Panteleimon himself. It is believed that people who have visited this monastery, can be cured of any disease. Therefore, some travelers overcome long distances to get hope for a cure. 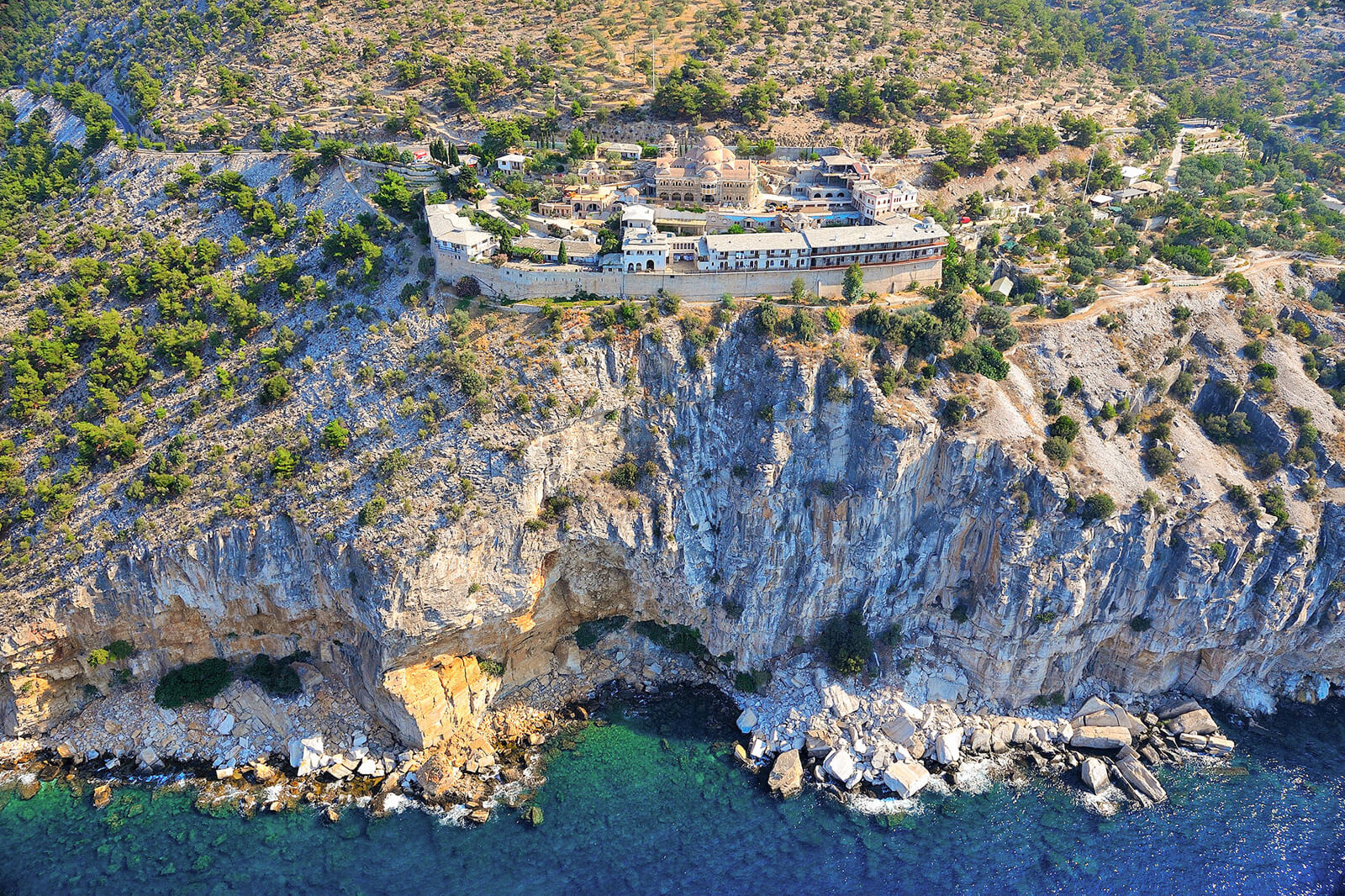 Another famous religious landmark of Thassos (Greece) is a large temple of the Archangel Michael on the edge of the cliff. It is located 25 km from the settlement of Limenaria. This convent was built in the 18th century. It is interesting both for its architecture and the beautiful view of the sea. It is also where a fragment of the Holy Nail taken from the crucifixion of Jesus is kept. Get ready for the strict rules of visiting the monastery: women can enter only in long skirts and with closed hands, men – in long pants.

The island of Thassos has 115 kilometers of coastline with beautiful white sand and clear water beaches. Most of them have received the international Blue Flag rating. It is awarded to coastal areas with excellent conditions for recreation: clean water and air, quality infrastructure. Just looking at the photos of Thassos Island in Greece, one wants to be transported immediately to its beaches. 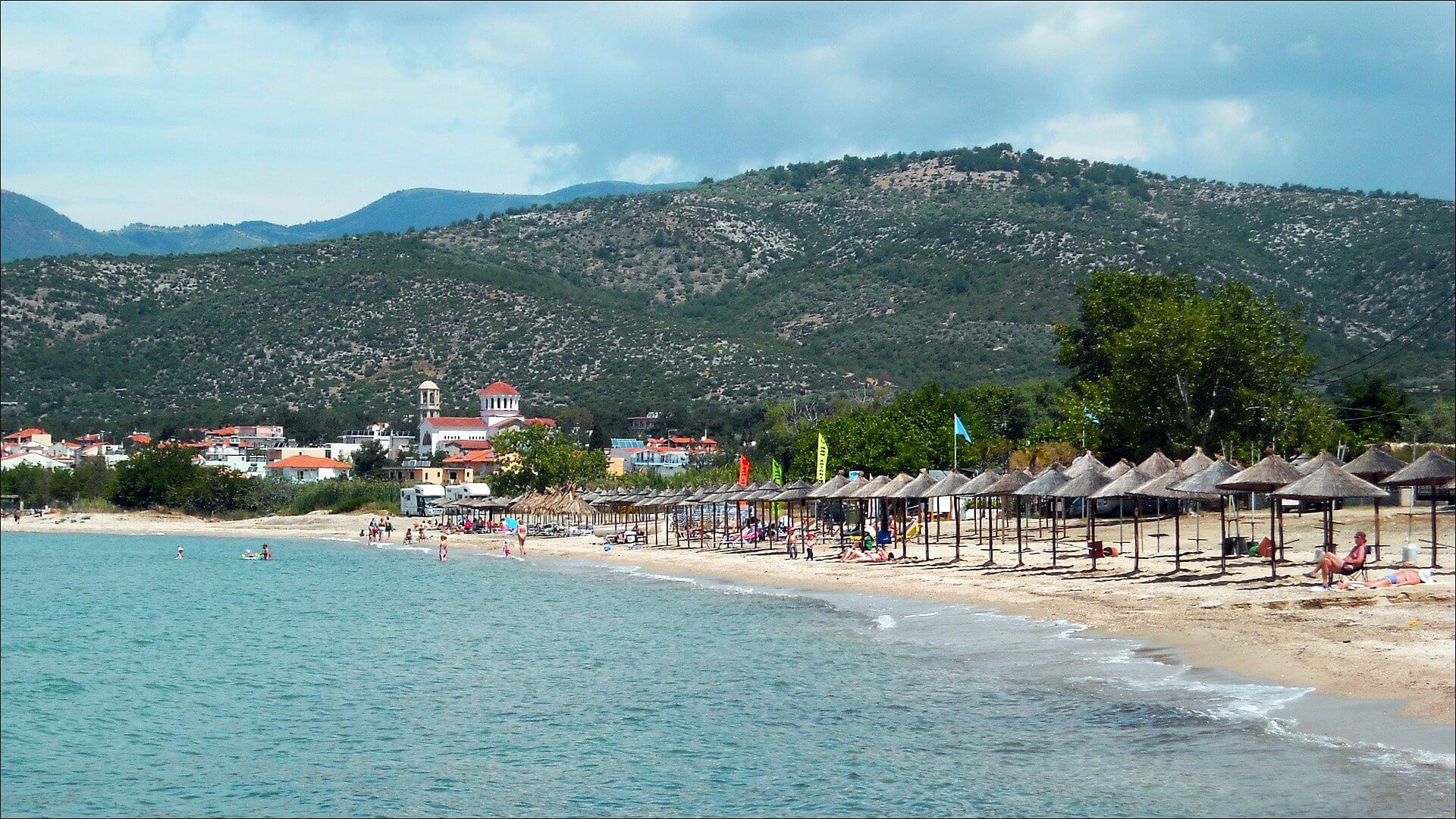 This beach is hidden in a secluded area on the west coast of Thassos. The “Blue Flag” award-winning beach of San Antonio boasts well-equipped beach areas and establishments with friendly bartenders and waiters whose cuisine is worthy of all praise.

On the southeast side of Thassos, Paradis beach is a secluded little cove that is frequented by surfers. The sandy beach is sheltered by hills covered with tropical trees and plants. Water quality and purity is certified by the “Blue flag” mark. 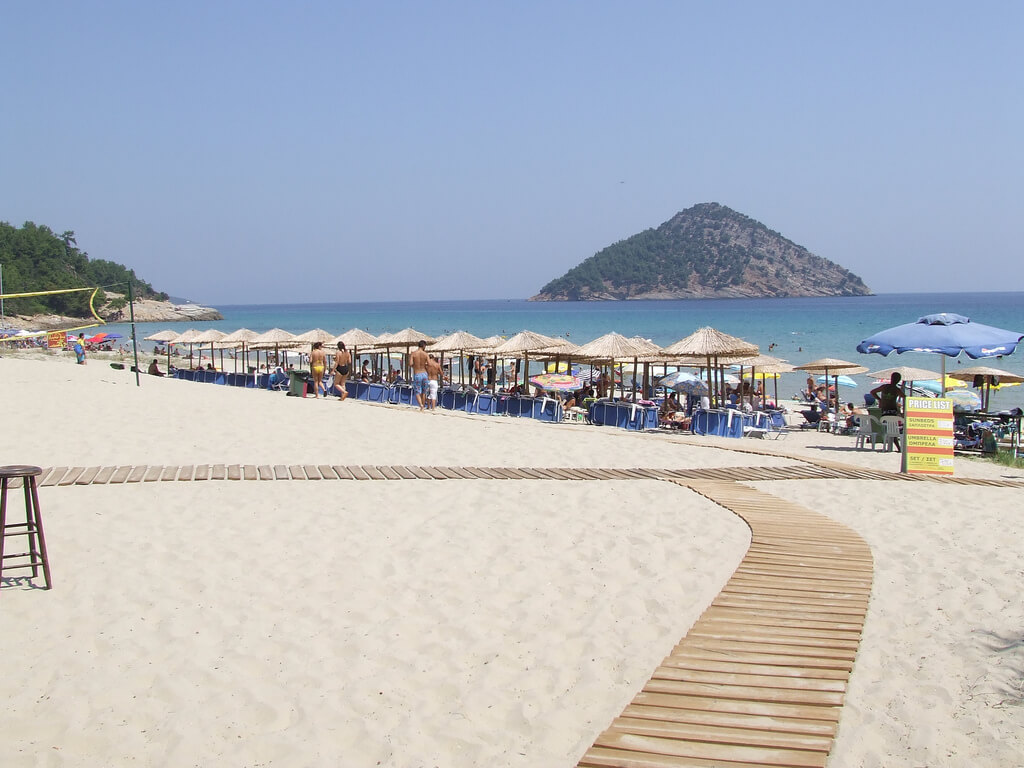 Paradise is divided into 3 zones, depending on the preferences of holidaymakers. Bikini zone is chosen by tourists who hold conservative disposition. Topless zone is designed for men and girls without the top part of the swimsuit. A separate area is reserved for nudists. Holidaymakers are asked to respect the rules of each zone, there is a control on site.

Entrance to the beach Paradise is free, sun lounger and umbrella are provided free of charge, but before that you still need to make an order at the bar. It is enough to buy an ordinary milkshake. 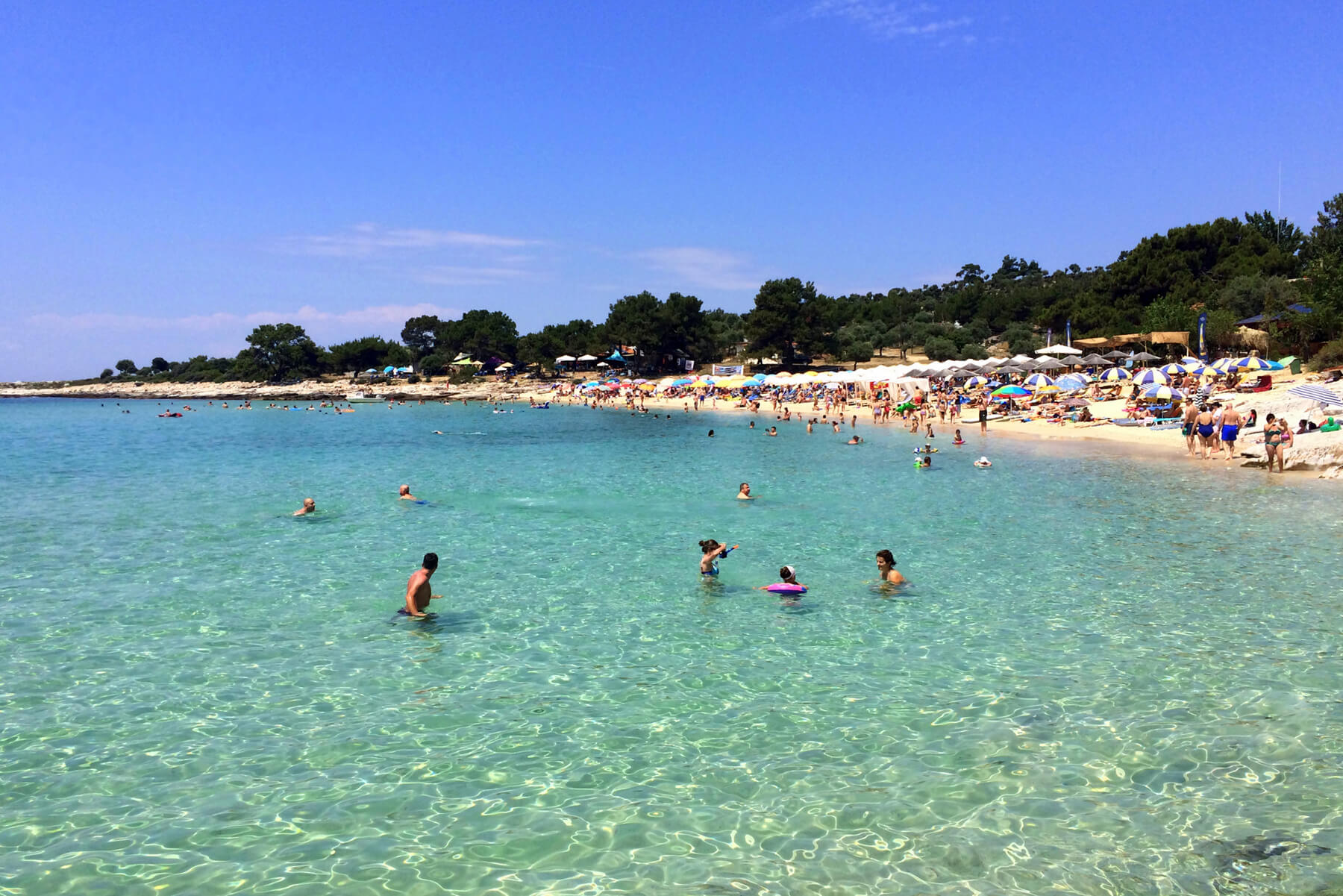 This beach is located 5km from Potos village. In the high season, there are restaurants and taverns and it can be difficult to find a free place under an umbrella. This is because Psili Ammos is considered the best sandy beach of Thassos. The beach has a special charm due to the cozy dunes with tamarisk bushes. In the shade of the trees you can sit on a towel. The beach is accessible by foot and is therefore suitable for small children. 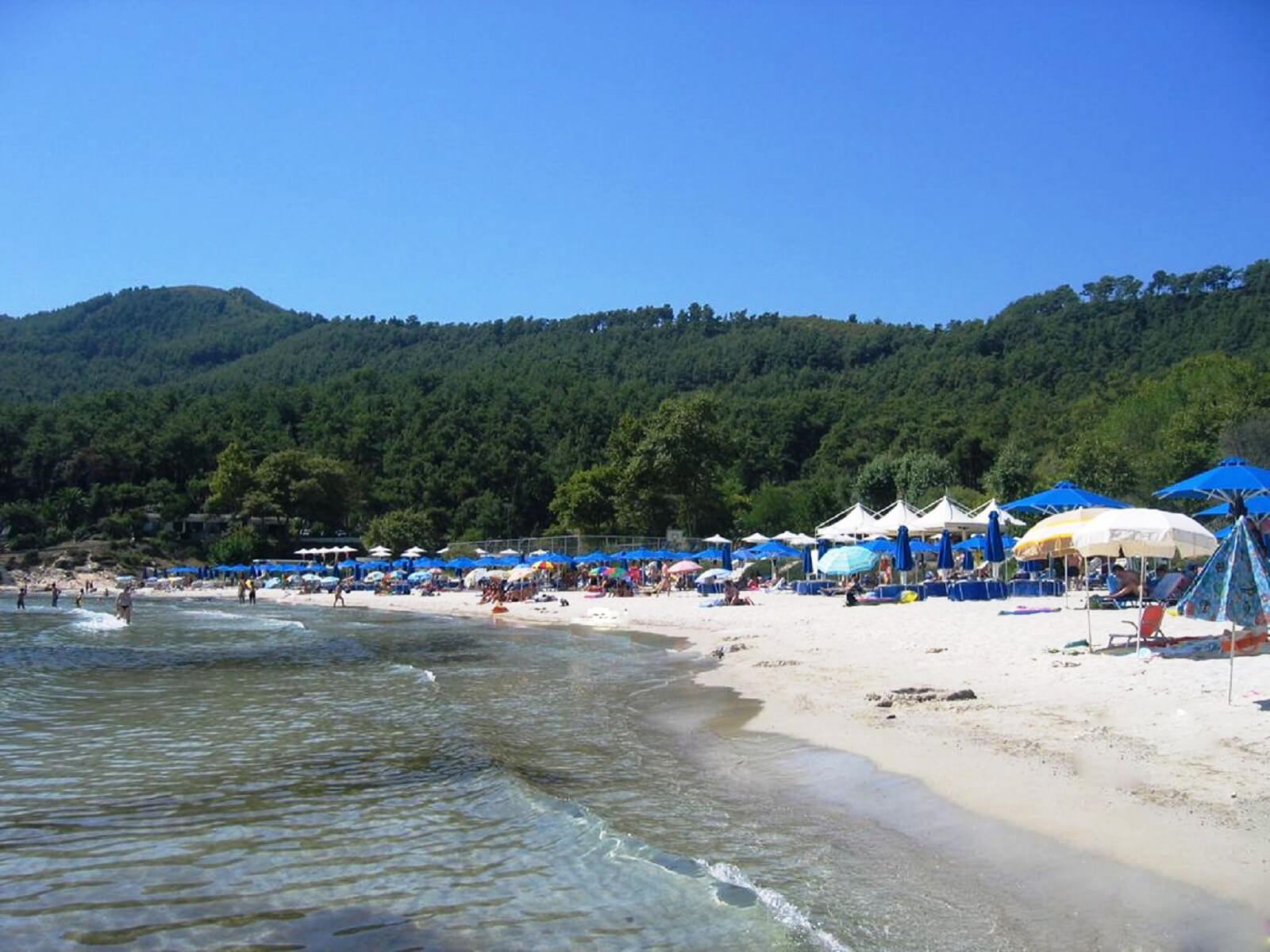 On Makrimos (south-eastern coast, near the town of Limenas), there are families with children. This beach differs from the others in the first place with a wide infrastructure and a wide range of entertainment, including sports games.

Makrimos and the other beaches of Thassos, has been awarded by the European Tourism Committee (Blue Flag Award), indicating its high quality. There are bars and restaurants on site. Many vacationers prefer to stay in the nearby comfortable hotel. 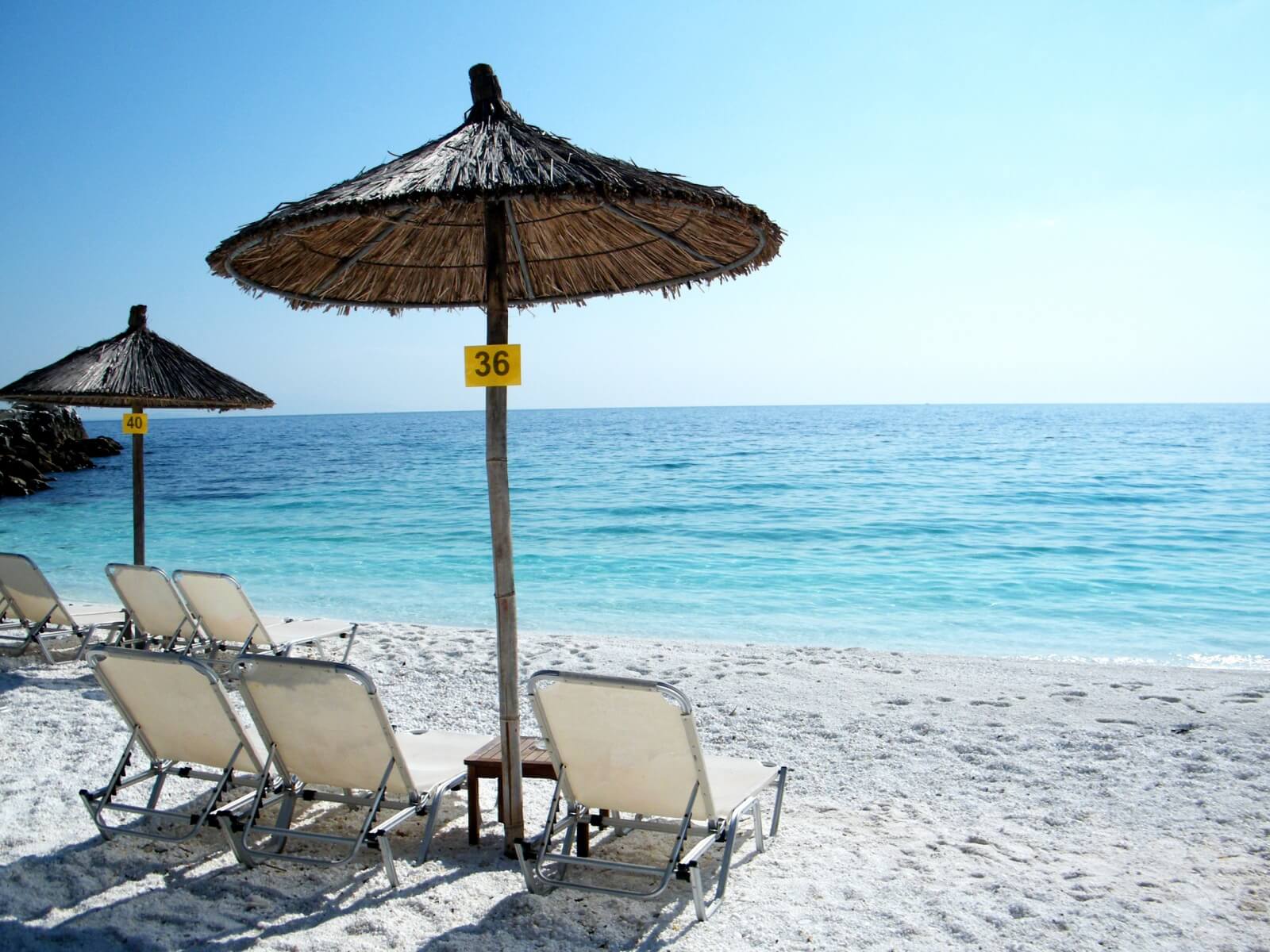 The marble beach on Thassos is the highlight of the entire island. Instead of the traditional sand or small stones, this beach is studded with marble chips (marble is mined nearby). Thanks to this coating the beach gets a perfect shade of white in the sun. Struck by this beauty tourists do not cease to admire it and take numerous photos. 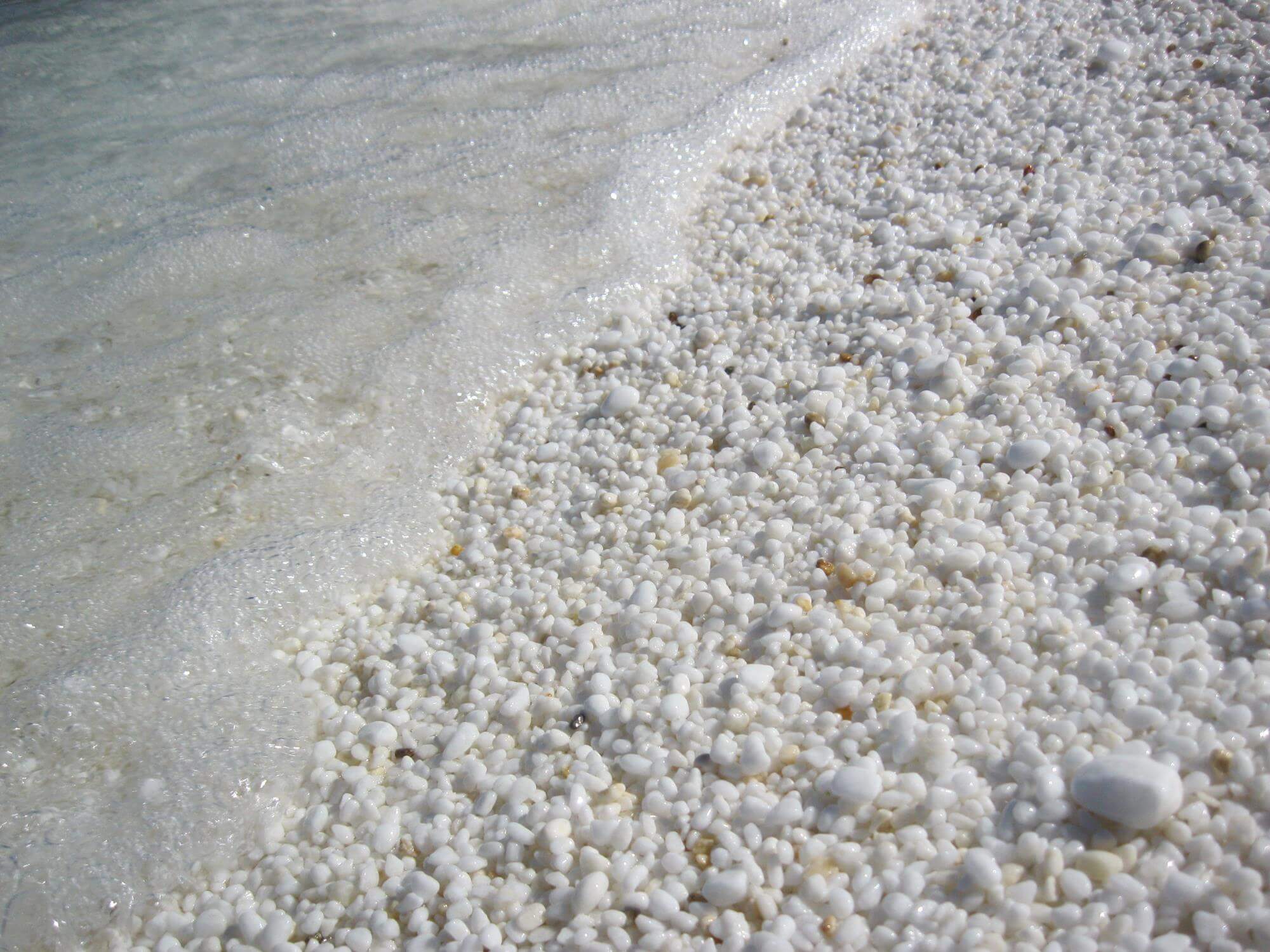 Marble Beach is famous for its quiet atmosphere. Since the nearest hotel is 40 minutes on foot, there are usually few tourists. At the same time the beach is free, vacationers can freely use all the facilities. The only condition is to make an order at the bar.

Here you can bask on the warm white sand, swim in the azure water, relax and rest in solitude. All conditions, which creates a green bay, there are for this. Sun loungers are provided free of charge. 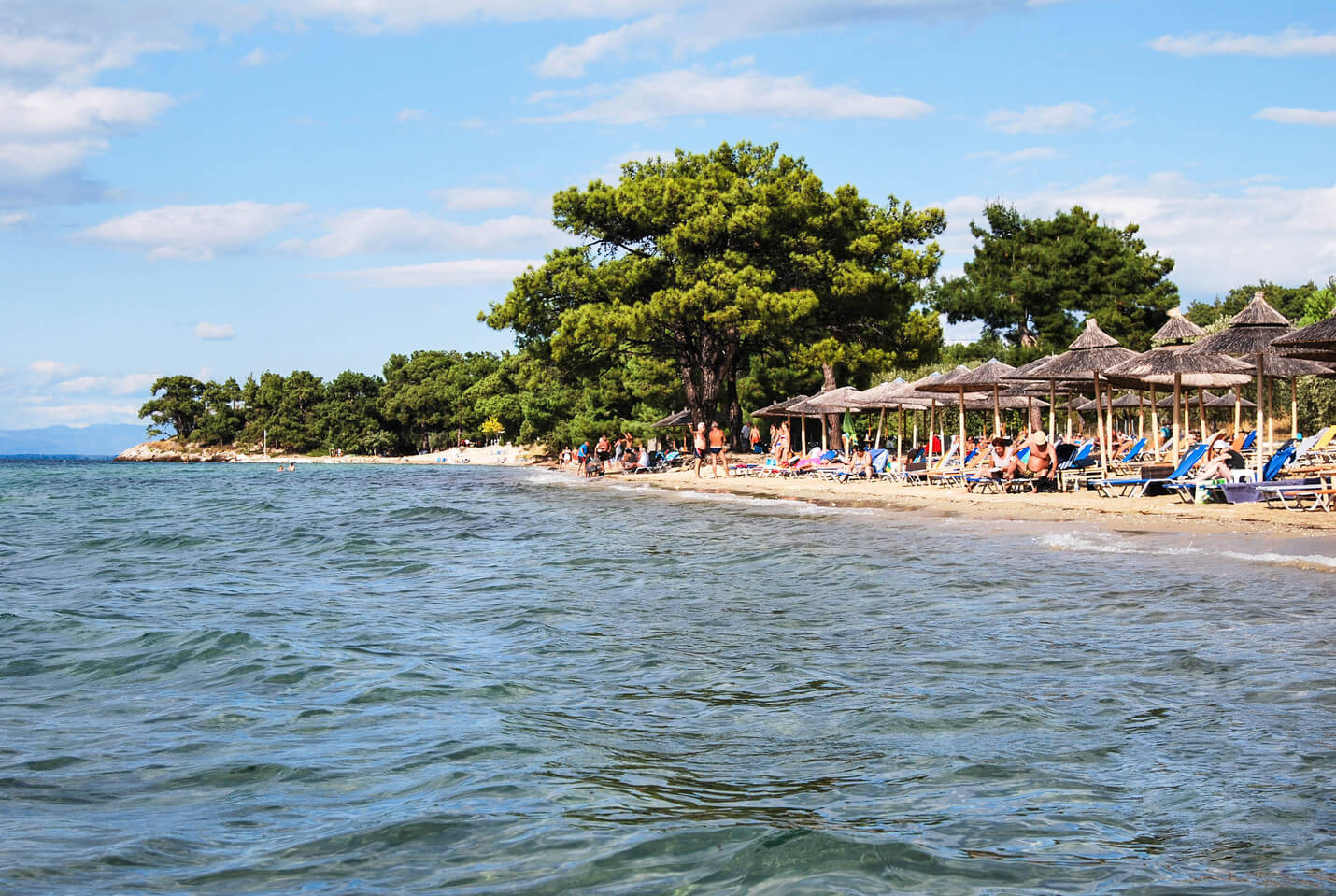 Local restaurants cook traditional Greek dishes, so you can spend the whole day on the beach and not worry about lunch. When you tire of lying down, tourists go for a walk through the shady alleys of an olive grove, admiring the picturesque nature.

Weather and Climate on Thassos 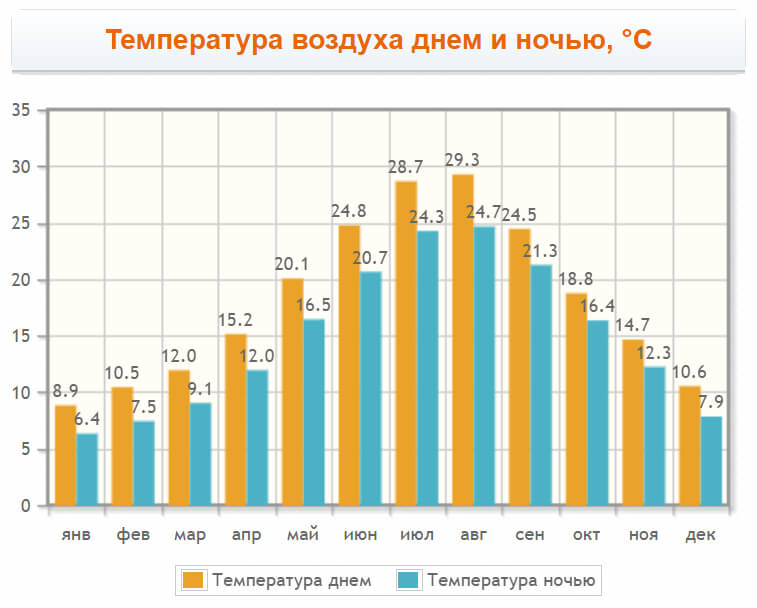 The weather in months on Thassos in Greece differs from the other, more popular islands. Thassos is located further north, so it’s a little cooler here. The maximum temperature during the summer months rarely rises above 29 degrees Celsius. The bathing season lasts from late May to late September, although many continue to swim in October.

READ
The 10 most beautiful lakes in California, USA

Since the island of Thassos (Greece) is 90% covered with deciduous and coniferous forests, the air here is fresh and the weather is comfortable in any month. Therefore, the resort is ideal for families with young children and anyone who cannot stand the heat.

A brief overview of Thassos island and useful travel tips – in this video.

Updated: 21 Apr, 2021 One of the unique places of the world where you can find all the pleasures that you need is …

Updated: 25 Jan, 2021 Santorini beaches are as popular as the legendary beaches of Sa…

Updated: 23 October, 2018 The island of Phangan has more than three dozen beaches, but…