Holašovice is a small Czech village standing in the south of Bohemia next to the forest of Blansko, famous for its beech trees.

The first mention of Holašovice dates back to the beginning of the 13th century, more precisely, to 1263. The second time the name of the village comes up in connection with its transfer by King Wenceslas II of Bohemia to the Cistercian monastery in Viššší Brod. It owned the village until 1848. Over these few hundred years the village has managed to almost completely deserted and reborn. This was the result of a severe epidemic of bubonic plague, which mowed down most of the population in the twenties of the 16th century. If we believe the monastery’s documents, only 2 people from the entire settlement survived. Locals say the two are still haunted at night wandering the streets. 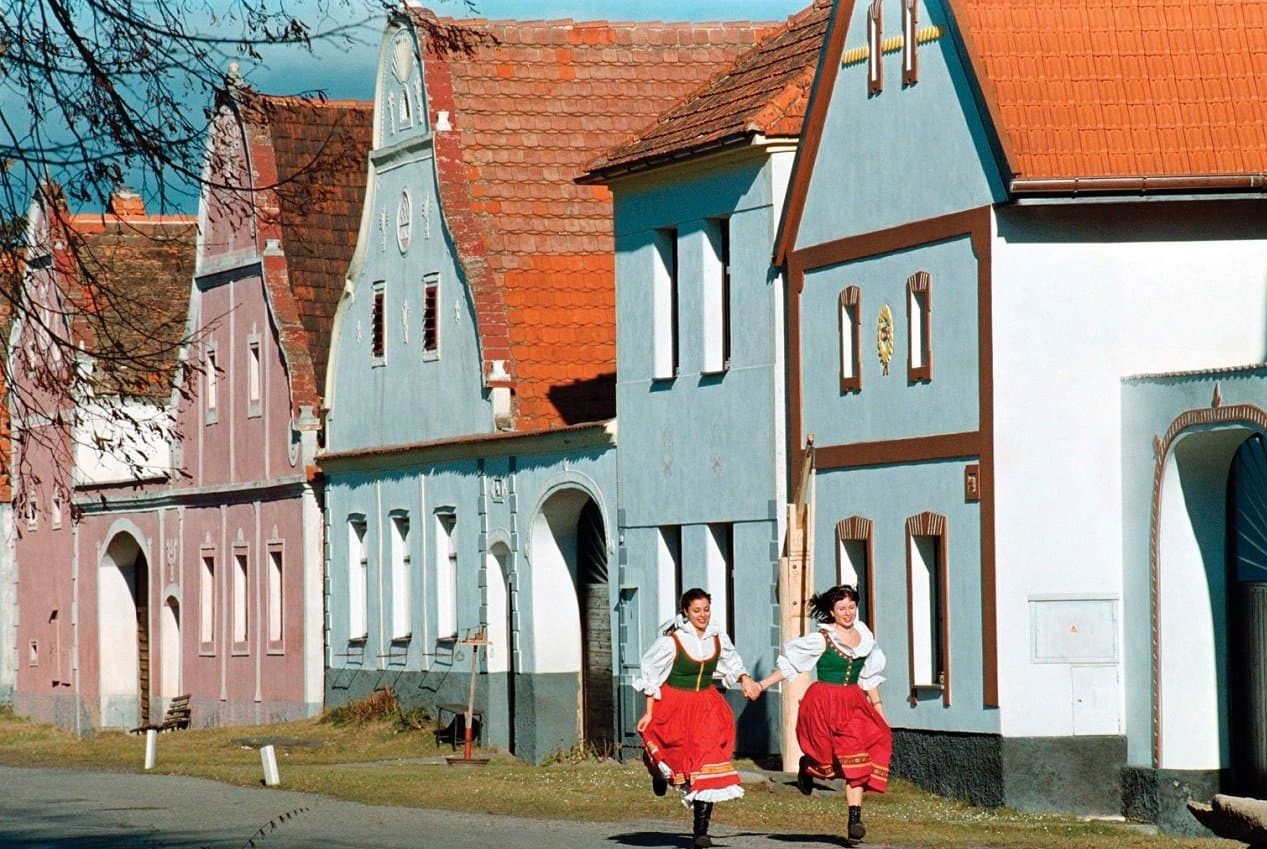 After the plague receded, the monks called the Bavarian and Austrian settlers. And by 1530, already 17 people lived in Holaszowice, most of whom spoke German. By the end of the 19th century, according to the population register, 10 Czechs and 157 Germans already lived there.

Restoration and re-population of Holašovice began in the 1990s. Now it was already the Czechs. The houses were restored, the infrastructure was renovated, and today, there are about 140 people living there. 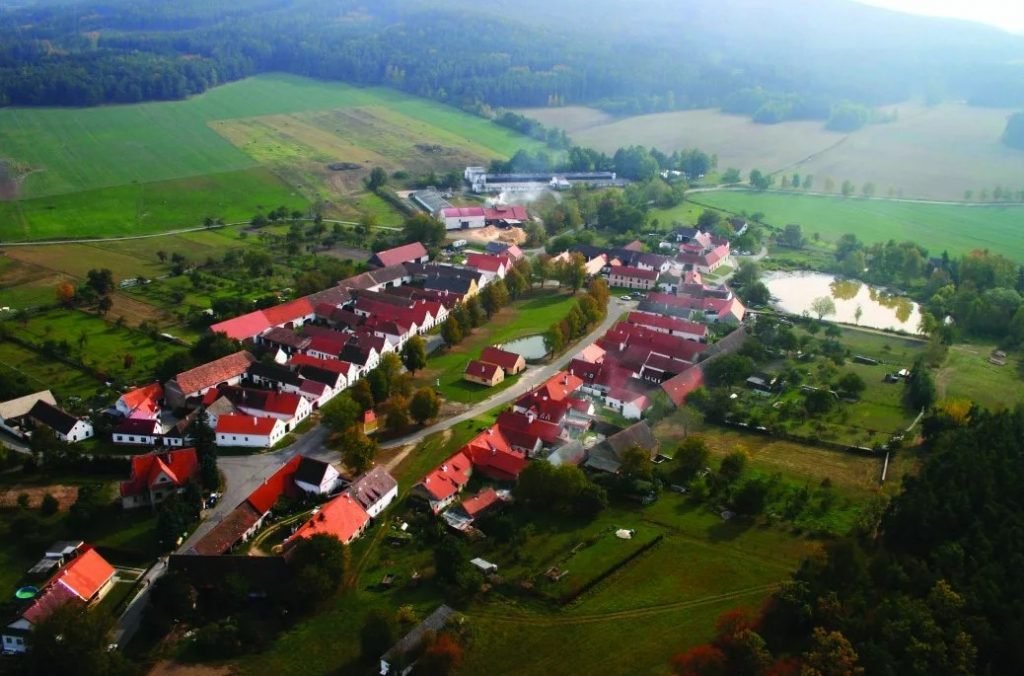 Holašovica is famous for its twin identical, almost gingerbread houses.

All the buildings here are from the XVIII-XIX centuries, the authentic layout of the XIX century and everywhere bright examples of the so-called “country baroque”.

READ
How the Sydney Opera House was built

The artistic Baroque style was prevalent in Europe in the XVII-XVIII centuries. It was characterized by curved or concave contours and opulence of pattern. From the common people Classic Baroque was of course far away. Actually, the rustic baroque emerged later, in the 1800s, when there was already classicism in architecture. Villagers on business trips to town saw the city’s decorations, and when they returned home, tried to reproduce what they liked. They copied naively, but with an understanding of symbolism, which is why elements of different styles are combined in the “rural baroque”, you can even find Masonic symbols.

Many Czech villages are in this style, but in Holašovice it is preserved in its purest form. 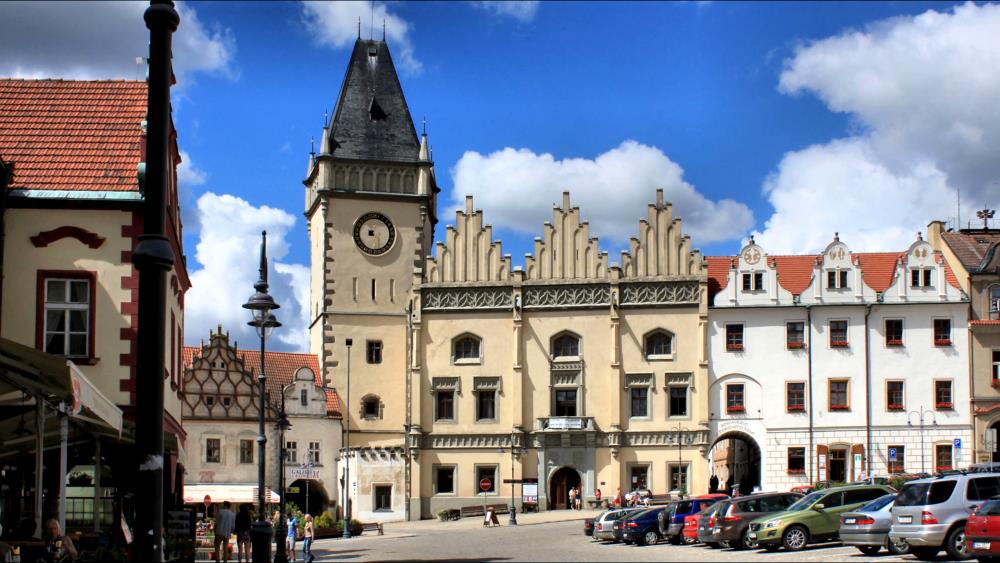 Contrary to all expectations, tourists who come here find not an open-air museum, and living everyday life of the village. Villagers mind their own business, cultivate land, raise cattle, children go to school, and adults go to work.

In the center of the village is a rectangular square with a pond in the middle. On the bank of the pond sits a wooden figure of a waterman with a fishing rod and a straw hat.

The square is surrounded by 28 stone facades decorated in the same “rural baroque” style – concave pediments, swirling patterns, ornate doors and gates. In the central street there is a chapel of Jan Nepomucký, next to which stands a wooden statue with outstretched arms – a monument to the patron of Bohemia. 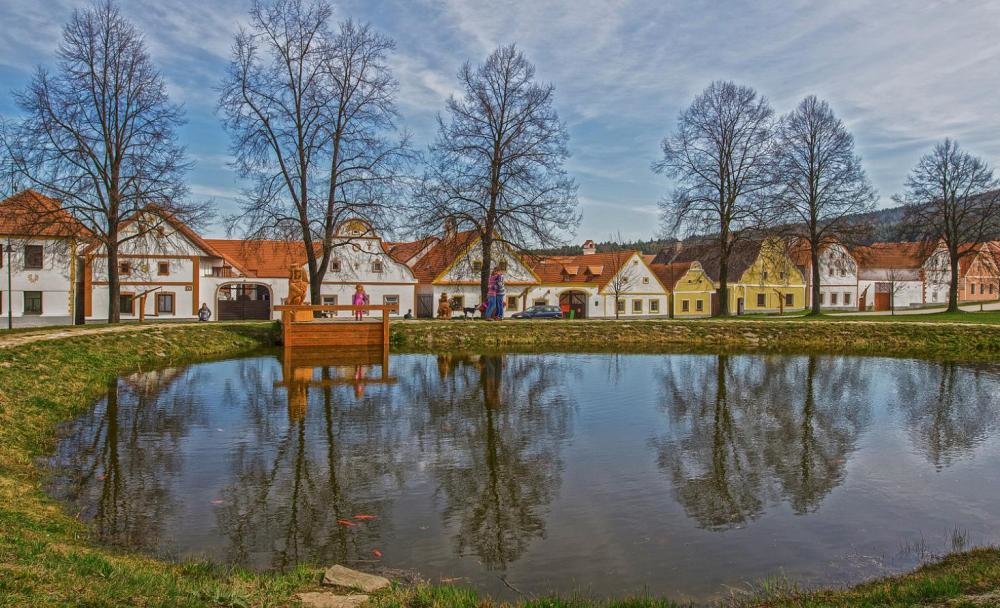 A plague column standing in the northern part of the village commemorates the 16th century plague. Further up the hill is a kind of “Stonehenge” with a wooden idol of Svyatovit chained to it on a platform. Here, periodically at night, locals hold dances and jump over the fire.

And the most ancient buildings in the village are two barns, dating from the late Middle Ages, and drawings, dated to the XVI century, were found on their walls.

READ
5 things to do in Rostock, Germany

All the houses here have preserved the original internal layout . The space is divided into two parts by the central hall. One side is for living quarters and the other is for farming. In front of the house there is a pump and a well, and necessarily there is a courtyard . The latter is usually enclosed by a stone barn. 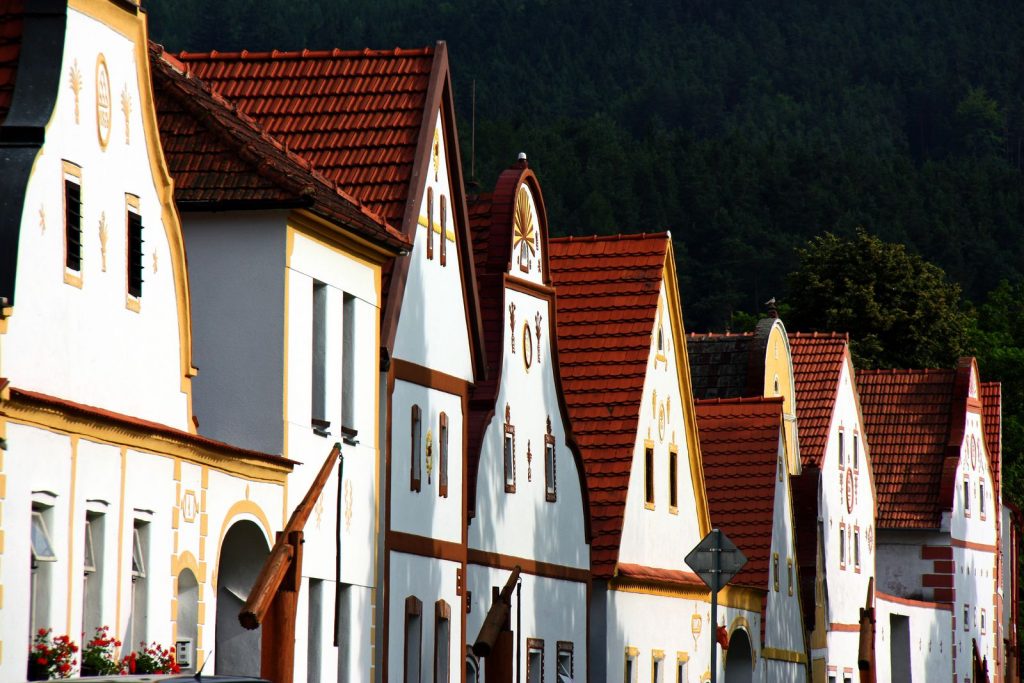 Most houses in the village are privately owned . To see the interior with your own eyes you can go to the Tourist Information Center, located in the building of the former school. There you can see with your own eyes what utensils used in the economy peasants in the XIX century, what clothes they wore, how was the rural resident of that time.

By yourself you can get here by bus, but be sure to find out the schedule, because the breaks between them are different in duration. On Saturday and Sunday there might not be any.

For tourists is open here blacksmith shop and ceramic workshop, whose souvenirs are sold in a small store. Also in the cafe you can try the very popular with visitors buns and blueberry dumplings. 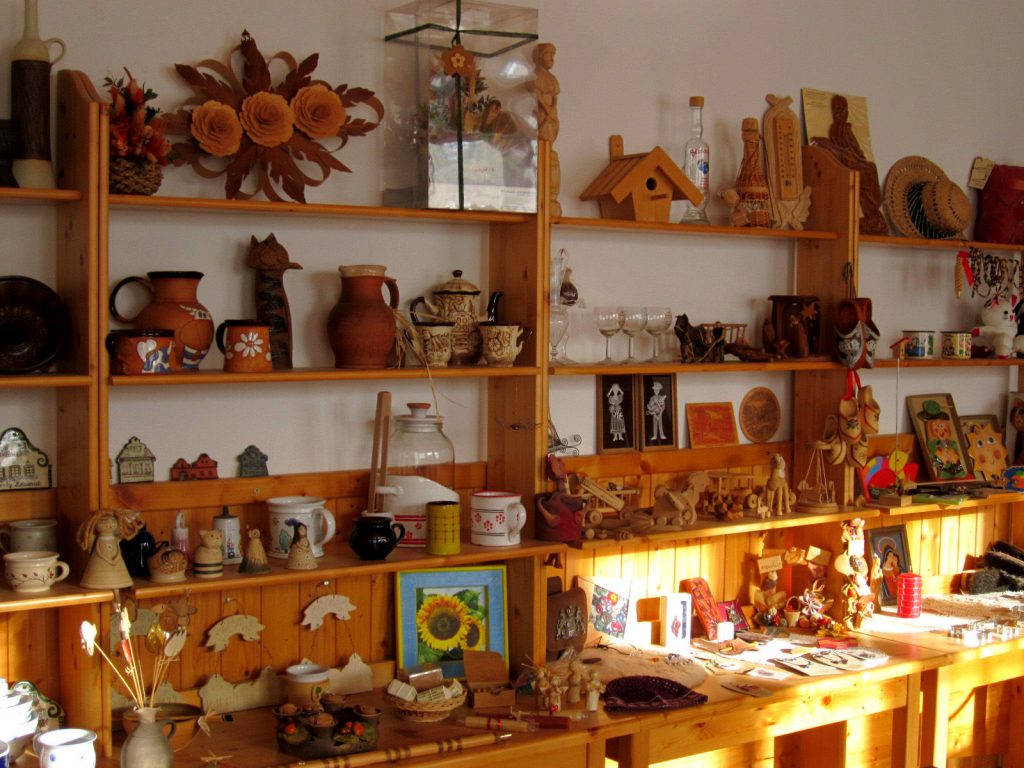 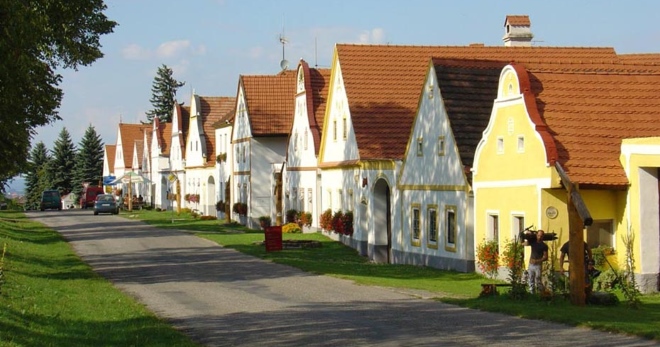 In the south of the Czech Republic, 15 km from Ceske Budejovice is Holašovice – a traditional Bohemian village, looking exactly as it was in the XIX century. Every year the historic village of Holašovice welcomes thousands of tourists, who are attracted by the historic settlement, in which quite real and absolutely modern people live. The population of the village in 2006 was 140 people. Since 1998 Holašovice is a UNESCO World Heritage Site.

The first mention of the village dates back to 1263. From 1292 to 1848 Holašovice was a property of the Cistercian monastery. Epidemic of bubonic plague ravaged the village (only two of its inhabitants survived) from 1520 to 1525. To commemorate the plague, the monastery found a plague column and organized the resettlement of families from Austria and Bavaria to Holaszowice.

In 1530, the village already had 17 households, and its population was predominantly German-speaking. For example, in 1895 there were only 19 Czechs for 157 ethnic Germans. Incidentally, 17 households in Holašovice remained until the twentieth century.

The second decline of the village occurred in the middle of the 20th century: during World War II, the entire Czech population left the village and after the war ended in 1946, the ethnic Germans were evicted from their homes and deported. The village was depopulated. Its recovery began only in the 1990s. 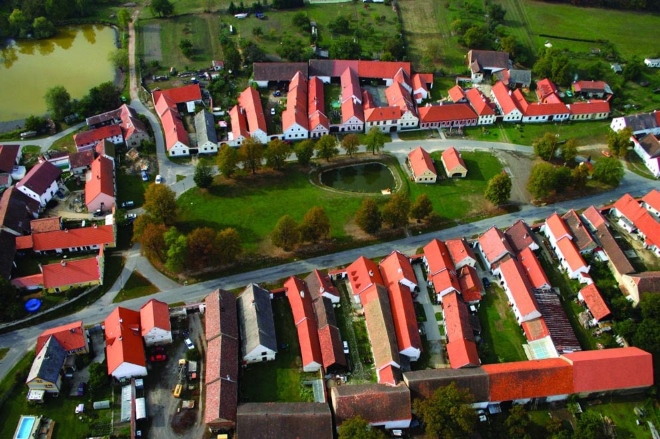 Features of the settlement

Holašovice consists of 28 identical farmsteads (houses outside differ only in decorative elements), which surround a rectangular square measuring 210×70 m. In the middle of the square is a pond, near which there is a smithy and a small chapel in honor of St. John of Nepomuk (it dates from 1755), next to which there is a wooden statue. 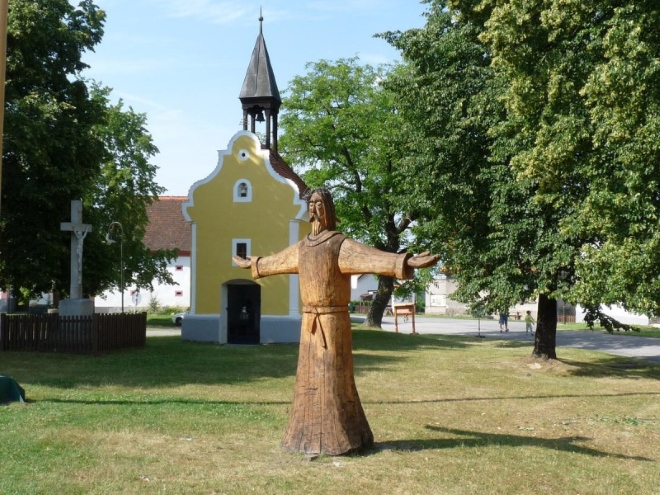 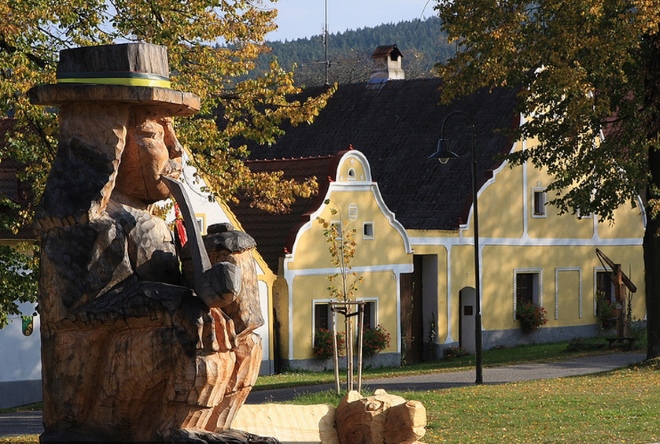 All houses in the village – and those that have survived from the late 18th – early 19th century, and those built at the end of the 20th – are made in the “country baroque” (another name – “South Bohemian folk baroque), which is a mixture of Baroque and Empire. It is characterized by flowing lines and decorated pediments. 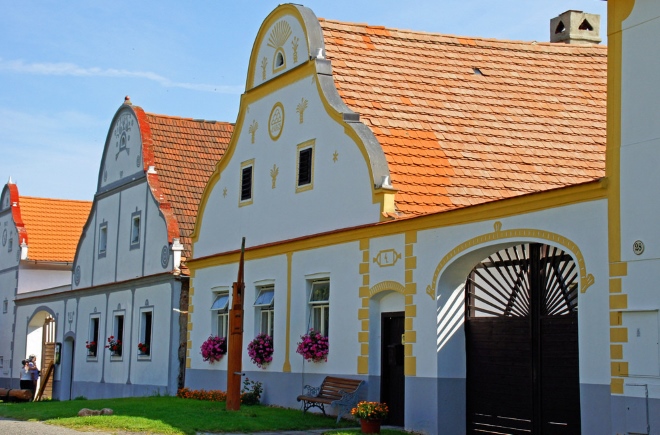 In Hološovice there are 2 restaurants: U Vojty and Jihoceska hospoda. They also overlook the main square of the village. 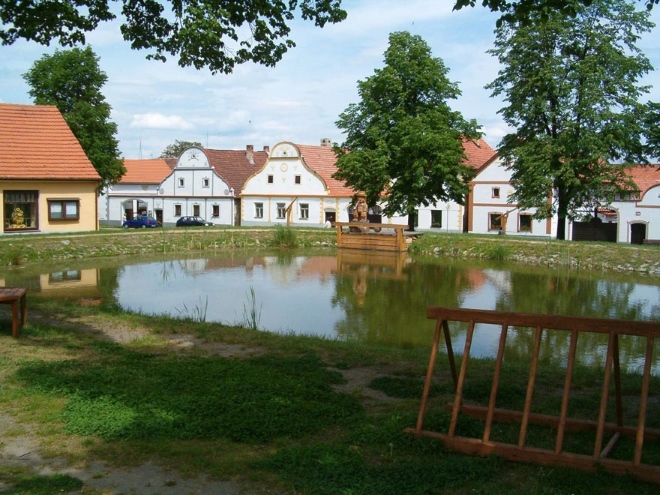 During the last weekend in July, Holašovice hosts a folklore festival Selské slavnosti and at the same time, a craft fair. 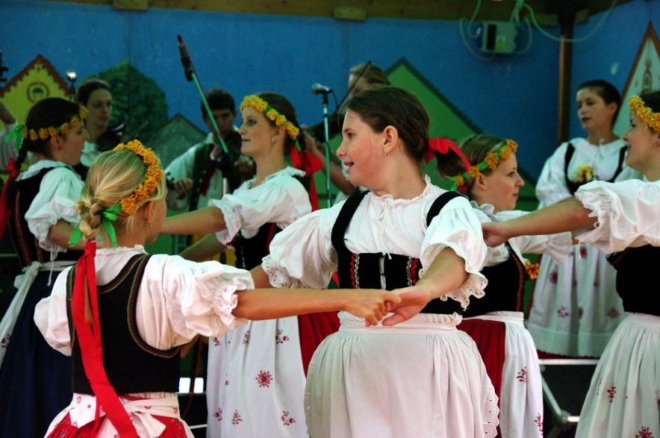 Another famous Czech site, the Hološovice Stonehenge, is situated not far from the village. However, unlike other cromlechs, it is a new creation, which was built in 2008. The circle consists of 25 menhirs. The foundation stone was previously lying on the village square and was dug in 2000 on the site of the future “Stonehenge” by a resident of the village, Vaclav Jilek. 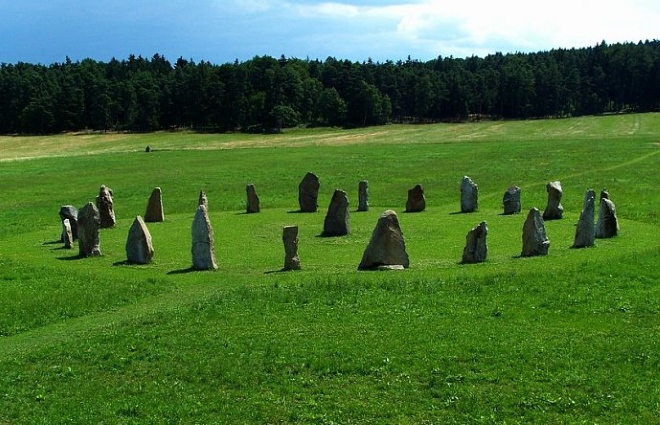 How to visit the village?

From Prague to Holašovice you can reach the village by car in about 2 hours. – If you take Road 4 and D4, – or 2 hours and 10 minutes by car. 10 minutes. – along the D3 and the D3. From Ceske Budejovice you can get there by bus.