Most information about Bodrum in Turkey. Bodrum sights with descriptions, guidebook and map.

Bodrum is a city in the southwestern part of Turkey in the province of Mugla, located on the northern tip of the bay of Kemre on the Aegean Sea. Built on the ruins of ancient Halicarnassus (one of the most famous cities of ancient Greek civilization) by the Knights Hospitallers, Bodrum has fantastic beaches and a beautiful turquoise sea, making it an ideal place for a beach holiday, spiced with a rich history and interesting gastronomy.

Until the 1960s, Bodrum was actually a small fishing village whose wealth and glory have been lost for centuries. But over the past 50 years, the city has become one of the most popular and fashionable resorts in Turkey, which has a convenient marina, beautiful nature and some very interesting sights: the ruins of Halicarnassus, Mausoleum of Mausolus (one of the Seven Wonders of the World), a mighty medieval knightly castle and photogenic old town with houses in the Greek style.

Modern Bodrum can be divided into eastern and western parts. The east is the beaches with restaurants, cafes, bars and clubs, while the west is the marina with its expensive supermarkets and restaurants.

Things to do (Bodrum): 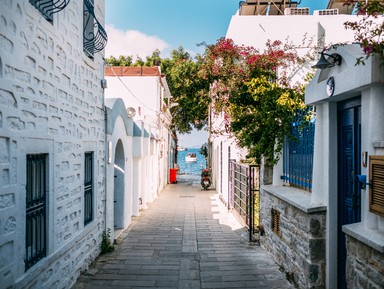 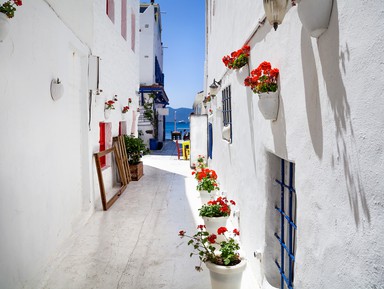 Bodrum – the city where the colors white and blue merge

Learn about the city’s great past and get caught up in the unforgettable colors of its streets.

Bodrum is located on the southern coast of the Bodrum Peninsula at the entrance of Kerme Bay. Opposite is the Greek island of Kos, 270 km south of Izmir, 300 km west of Antalya. Bodrum is surrounded by picturesque green hills and excellent beaches. 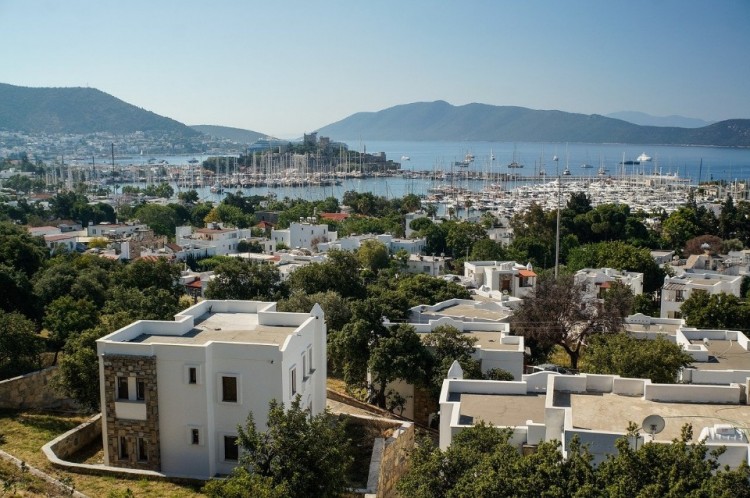 READ
Serene sailing in the Seychelles 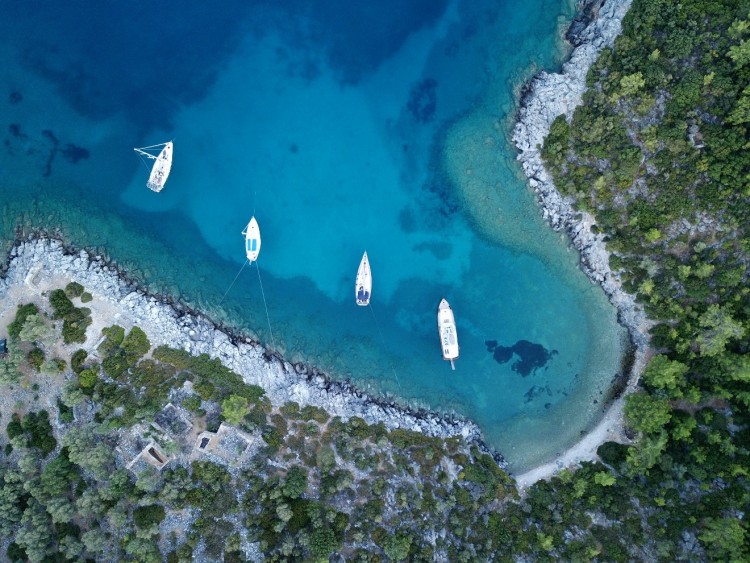 The Aegean Sea in Bodrum

READ
Tourist's diary: what you should know about unspoken rules of different nations

The first mention of the city of Bodrum dates back to the 5th century BC. It is believed that the settlement here was founded by the Dorians. Once at the site of the modern city was the ancient Halicarnassus, which was the capital of Caria and one of the most important centers of ancient Greece. It was best known for the mausoleum built by Artemisia III for her husband King Mausolus. This structure was considered one of the Seven Wonders of the World.

With the decline of the ancient Greek civilization, Halicarnassus became part of the Persian possessions. In 334 BC, Alexander of Macedon conquered the city and ordered its destruction because of the stubborn resistance of the local military garrison. After that, Halicarnassus lost its importance and was later conquered by the Romans.

The “father of history,” Herodotus, was born in Halicarnassus. 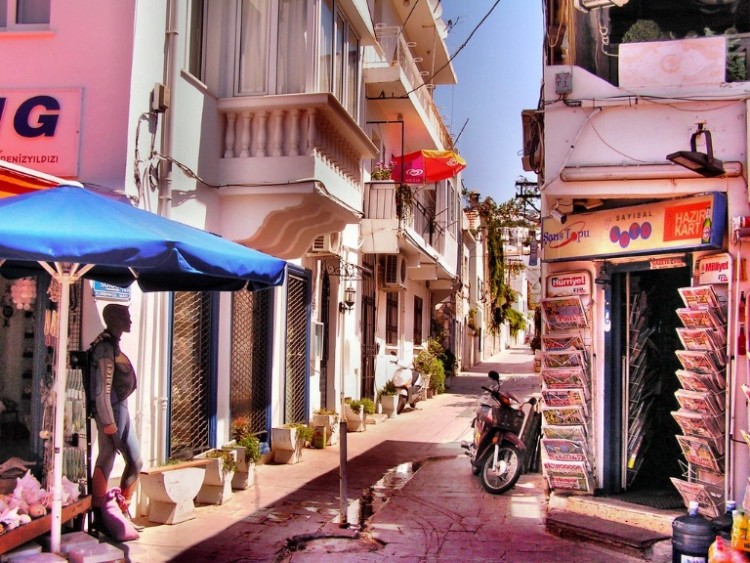 At the end of the ancient period, a series of earthquakes destroyed most of the city, including the great mausoleum. There was also tremendous damage from repeated pirate raids. In the early Byzantine era, when Halicarnassus was an important bishopric, almost nothing remained of the shining ancient city.

In 1402, the Knights Hospitallers from Rhodes arrived here and built a mighty castle, using the stones of the ancient mausoleum for construction. In 1522 Suleiman the Magnificent seized the base of the Crusader Knights, who then briefly moved to Sicily and then permanently to Malta, leaving the castle of St. Peter and Bodrum to the Ottoman Empire.

By the early 20th century, Bodrum was actually a small coastal town. In recent decades, it has been a popular resort, aided by picturesque nature and clean sea, a convenient marina and vibrant nightlife. 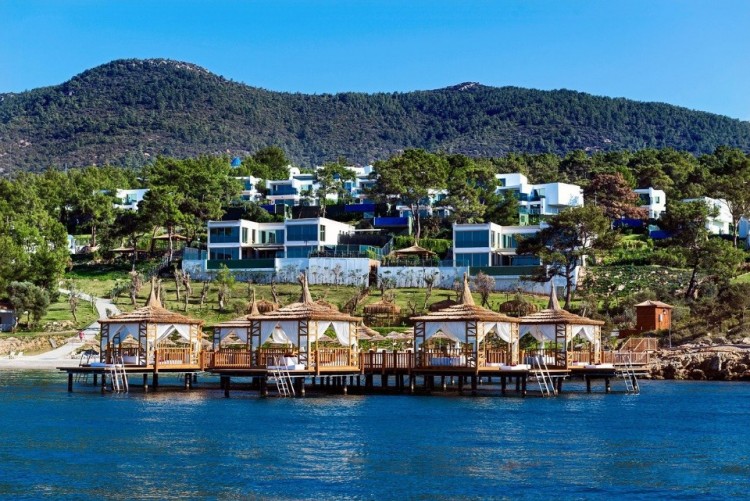 Bodrum Airport is about 35 km from the city. During the tourist season it serves a large number of charters. There is a special bus that leaves from the bus terminal some time after the arrival of the flight and arrives downtown. The fare is 17 Turkish liras (10 liras in low season). Travel time is 20-40 minutes.

You can also use the larger airports of Antalya and Izmir.

Regular bus connections have Bodrum with Istanbul, Antalya, Izmir, Konya, Ankara, Bursa and other major cities of Turkey. There are also ferry connections to the island of Rhodes. 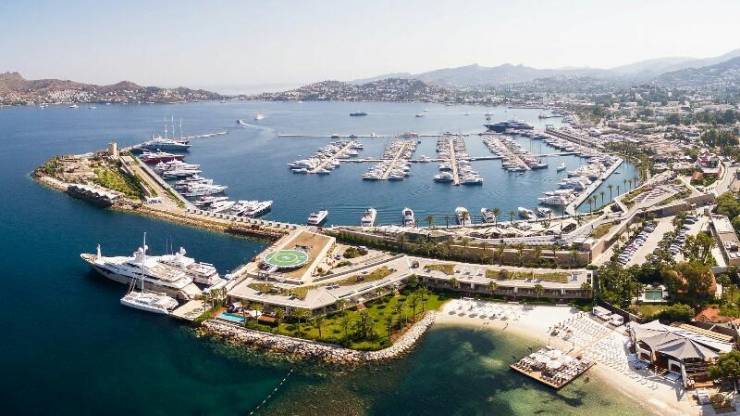 As in any Turkish resort, Bodrum has a huge number of stores and stalls selling a variety of products: souvenirs, traditional Turkish sweets, clothing and shoes. The bazaar is located on Cevat Şakır Caddesi.

To get the best price in Turkey, you need to haggle. Often the cost of goods is overpriced. 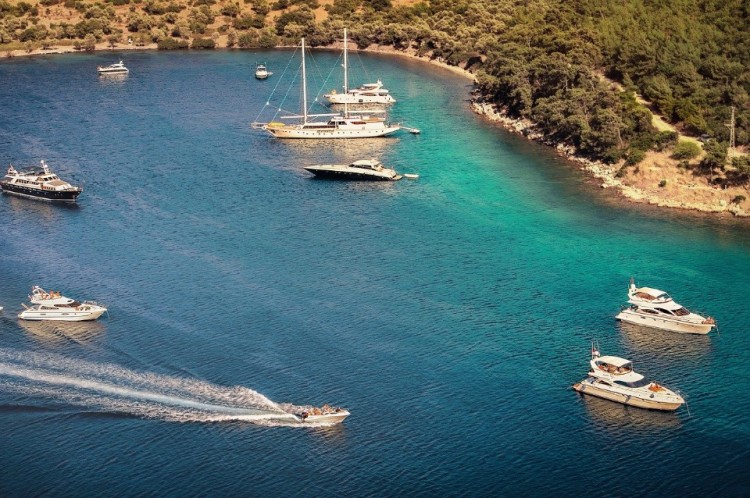 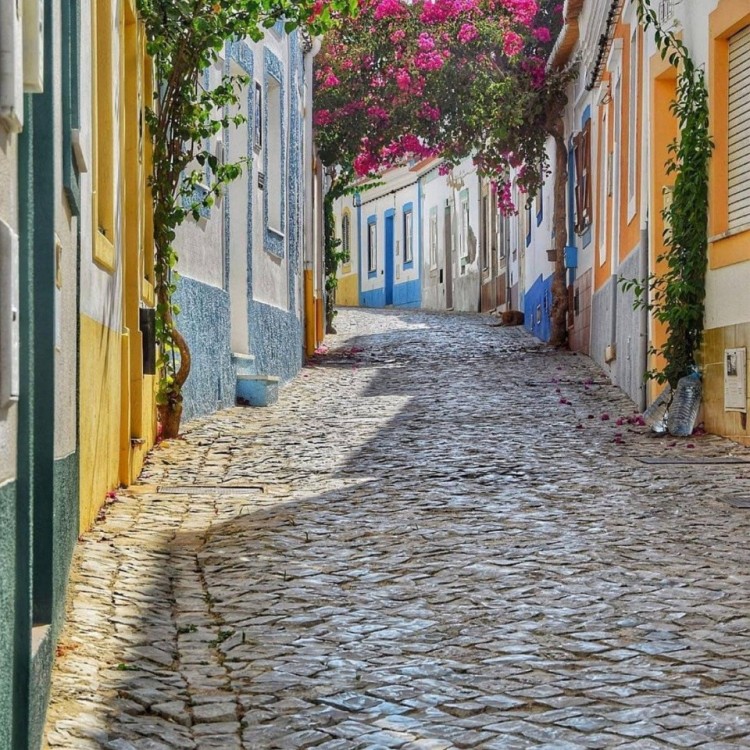 The old town is the most picturesque area of Bodrum, which has preserved the charm of a small fishing village. It is located behind the medieval castle and is a maze of narrow streets, tucked into the green, with old whitewashed and stone houses. It’s a great place for walks and photo shoots. 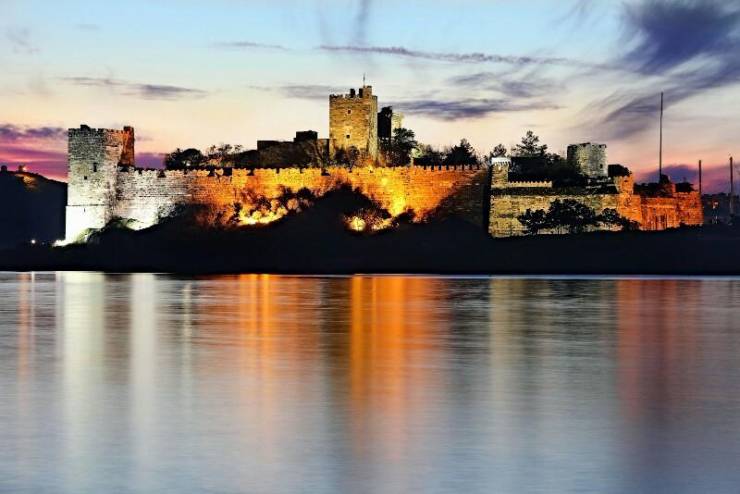 St. Peter’s Castle is Bodrum’s most famous landmark. It is situated on a promontory east of the harbour and was built in the early 15th century by Knights Hospitallers who came from Rhodes. Interestingly, the site has been fortified for over 3,000 years and is probably the site of the palace of Mausolus, dating back to the 4th century BC.

To build the castle, the knights used the ruins of an ancient mausoleum that had been destroyed by a series of earthquakes. By 1522 one of the wonders of the world was finally dismantled and destroyed, and in December of the same year the castle finally surrendered to Sultan Suleiman. 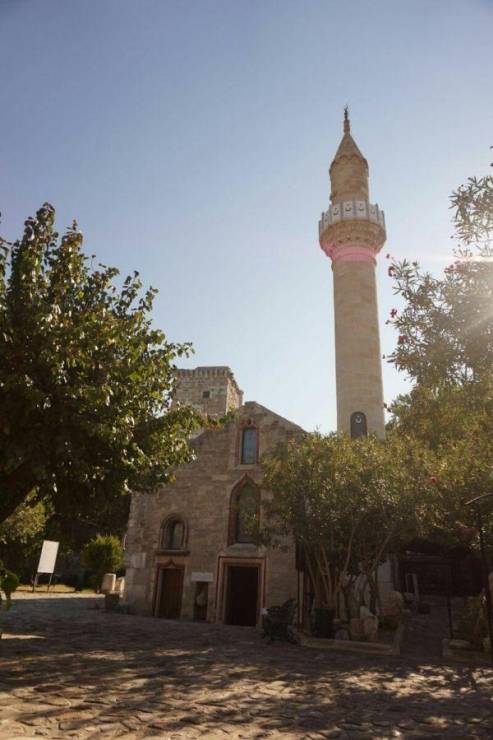 The mosque in the castle

The castle has been preserved in excellent condition. Its structure has a French tower, an English tower with a sculpture of a lion on the western wall and the Gatineau Tower, which leads to the underground. The castle church, after the fortress was taken over by the Ottomans in the 16th century, was rebuilt into a mosque.

Within the walls of St. Peter’s Castle there is a museum of underwater archaeology with a huge collection of ancient amphorae and other impressive finds. 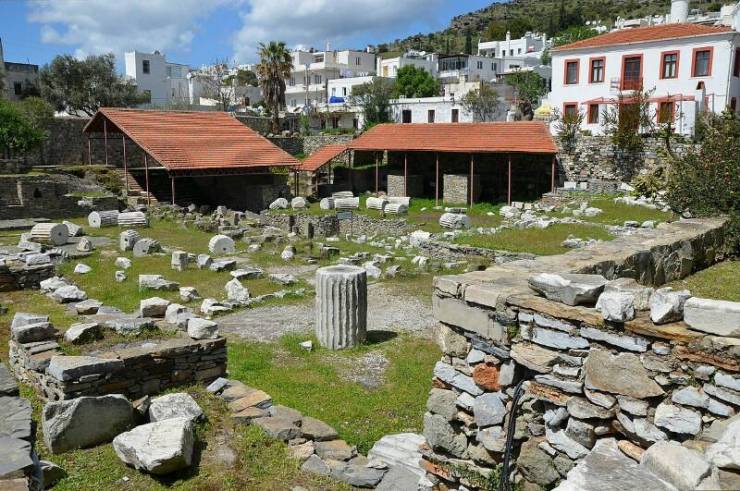 Mausoleum of Mausolus is the ruins of one of the Seven Wonders of the World. The magnificent tomb that first defined the term “mausoleum” was built in Halicarnassus for the Carian ruler Mausoleum in the 4th century B.C. Mounted on a massive podium, it was a monument of incredible grandeur, reaching up to 45 meters in height, with reliefs on each facade carved by prominent Greek sculptors and adorned with hundreds of sculptures.

The mausoleum at Halicarnassus was destroyed by several earthquakes between 1100 and 1400 and was the last of the six ruined wonders of the ancient world. The ruins of the ancient tomb were used as building material for the construction of the citadel of knights. 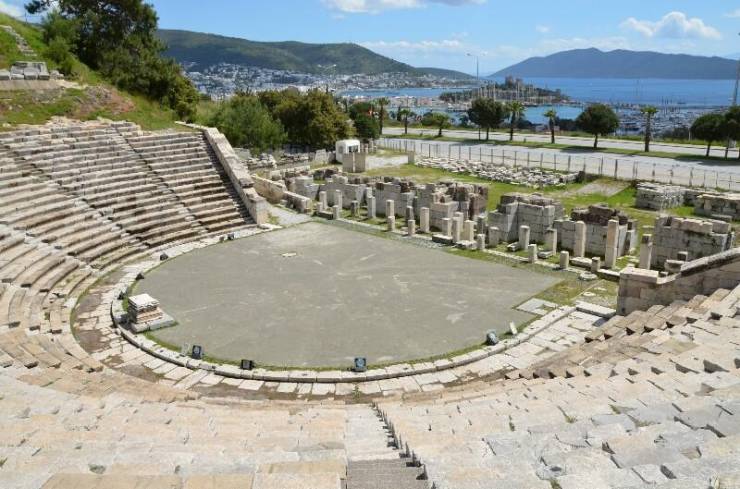 The Theater of Halicarnassus

A couple of streets away from the mausoleum is a Greek-style theater built during the reign of Mausolus in the 4th century B.C. and later expanded by the Romans in the 2nd century A.D. In its heyday, the structure could seat about 13,000 people. The theater has survived to this day well enough to be used as a stage for cultural events. 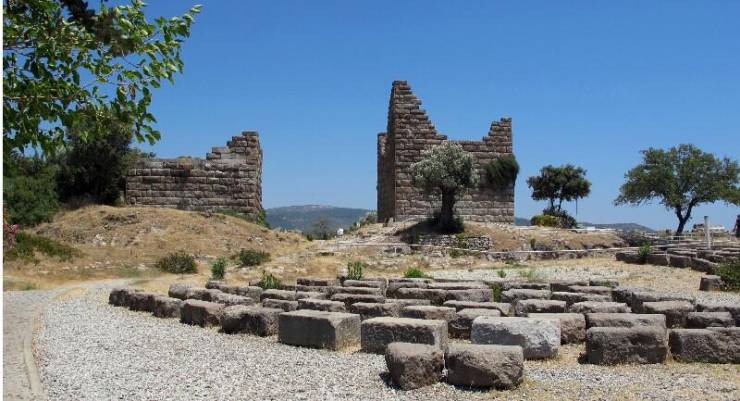 The Mindos Gate is the last remaining remnant of the seven km long ancient fortress walls of Halicarnassus in the time of the legendary Mausolus. There are small ruins of stones and remains of mosaics which date back to the 3rd-4th century BC.

The gates of Mindos once had two mighty towers. In front of the gate are the remains of the moat in which many soldiers of Alexander the Great died during the storming of Halicarnassus in 334 BC. 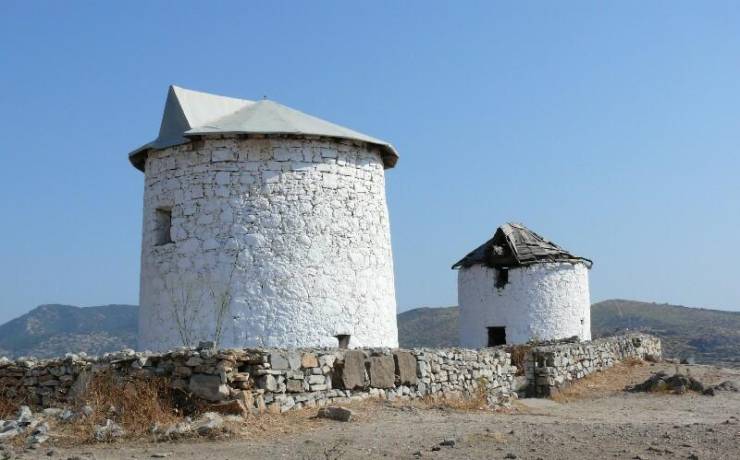 The Bodrum Peninsula is dotted with quaint windmills that have been built here since the early 18th century. These ancient structures are in various states of disrepair and are set high on the crests of hills to catch the wind. Between Bodrum and neighboring Gümbet, you can admire eight of them. 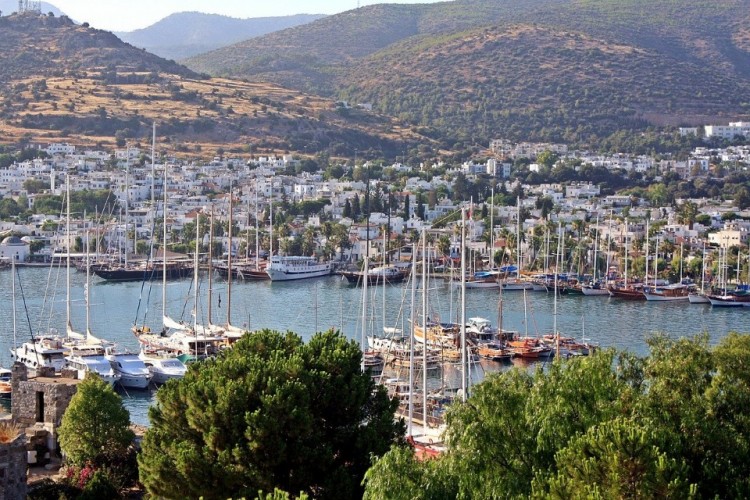 Bodrum Harbor, nestled behind the castle, has more than 3,000 years of history. Now on its western side is the Milta Bodrum Marina, which is considered one of the most prestigious mooring sites for such vessels in the entire Aegean Sea.

The harbor has wide promenades decorated with palm trees and eucalyptus trees. It’s a great place to walk around and watch the ferries come and go, especially at sunset. There’s also a continuous string of restaurants and cafes with great views. 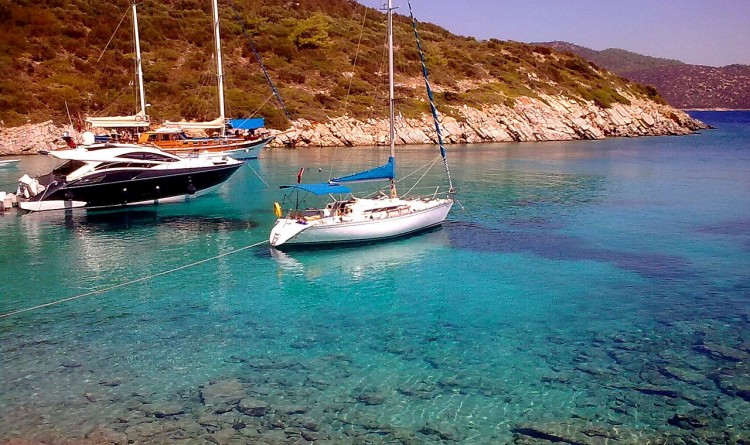 Orak Island is located in the Aegean Sea east of Bodrum overlooking a long, mostly uninhabited stretch of peninsula. We recommend a short cruise to this picturesque place. The departure for Orak Island takes place from Bodrum harbor in the late morning. The ships usually make a stop at the exquisite Red Bay and then anchor in the beautiful bay of Orak Island, where you can swim and snorkel in the shimmering turquoise waters and then sunbathe on the white sandy beach. 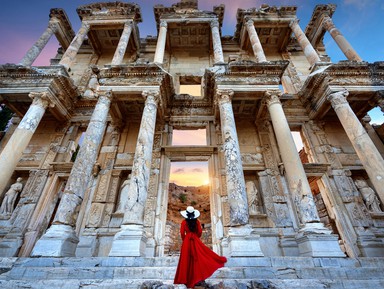 From Bodrum to ancient Ephesus 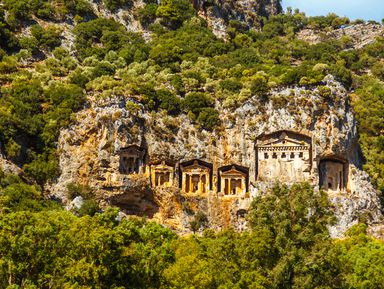