Grown in the Steppe: Mongolia

Mongolia is a country that, like space, seems endless . It is mysterious, full of paleontological discoveries, and its vast lands are home to a handful of people. It is home to just over 3 million people, nearly half of whom live in Ulaanbaatar, the country’s capital. Part of the population is nomadic, leading their lives in the steppe. It’s a kind of art – it’s not easy to survive here without the necessary skills. It requires daily hard work. The nomadic way of life is moving across the steppe in search of fresh pastures for their animals. In a sense, it is a journey that never seems to end, though it is a little different now than it was before. And that’s where modernity has come in . The yurts have solar panels that provide access to electricity, and some have satellite dishes. Mongolians also use cell phones. Moving between neighbors is done by motorcycle, car, or tractor, which have become everyday means of transportation, although they still mostly ride horses. The most important thing for Mongolians is work . If you are diligent, you are respected. Only the resourceful survive in the steppe. So how does a little nomad live? Who raises children – parents or the steppe? 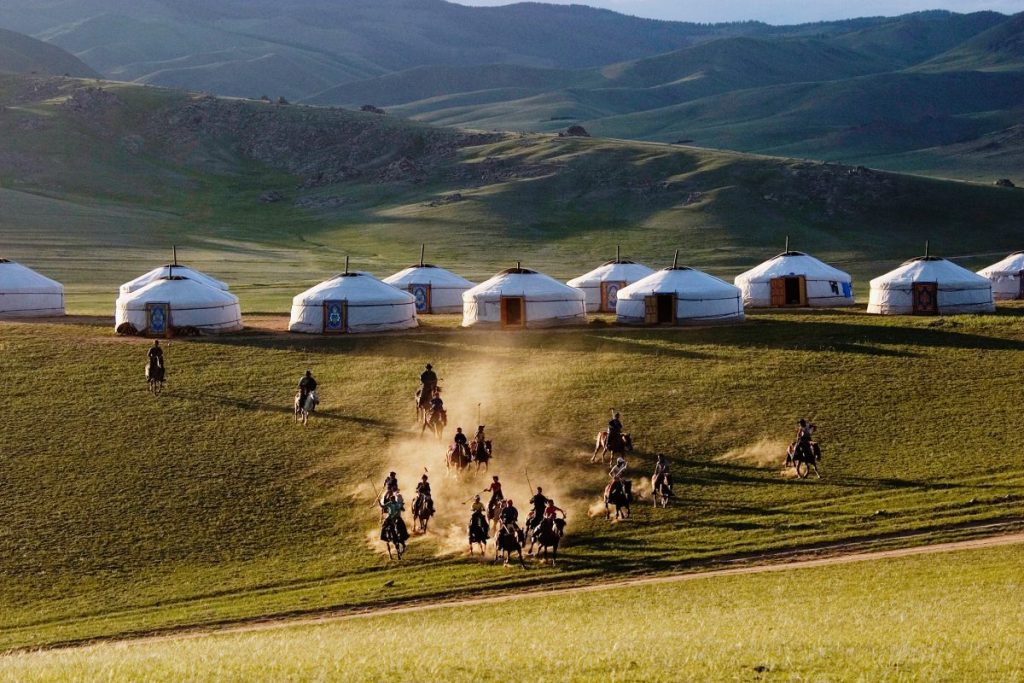 Grown in the Steppe: Mongolia

Tenderness until the age of three, traditional treatments, happy names and initiation rites

According to Mongolian tradition, a child under the age of three is raised without gender determination . This is due to old beliefs that a child until this age is in transition, which means that he or she is between two worlds and does not yet have a soul. Boys and girls are treated the same . Until the age of three, babies are treated very gently, hugged and kissed, although not as vigorously as, for example, in Europe.

Babies are naturally immunized from the first days of life. Breastfeeding is natural, stemming from tradition, it lasts up to 2-3 years, sometimes longer. Here, no disposable diapers are used, but cloths, which are then rinsed in cold water. Treatment of diseases is also usually done by traditional methods, since access to medical care is difficult because of the long distances involved. But sometimes doctors come to the yurts on horses. Since ancient times, to prevent skin diseases the baby is bathed in fresh water the first week of life, the second in salt water, and the third in mother’s milk. In fact, mother’s milk is used in Mongolia for various ailments and is considered a medicine.

An interesting thing with Mongolians is names . They don’t have last names, so the father’s name or initials are usually put before the child’s name. Traditionally, a child may be named after an object that his father first saw after the child was born. Sometimes the name is supposed to ward off evil spirits, then it has a negative connotation, such as a bad dog. Usually such names are given to children in families that have experienced the loss of a child . The name in this case is intended to confuse evil spirits. Often names are given from natural phenomena, plant motifs, attributes of strength, positive values and beauty. Mongolian names have great power and symbolic meaning. 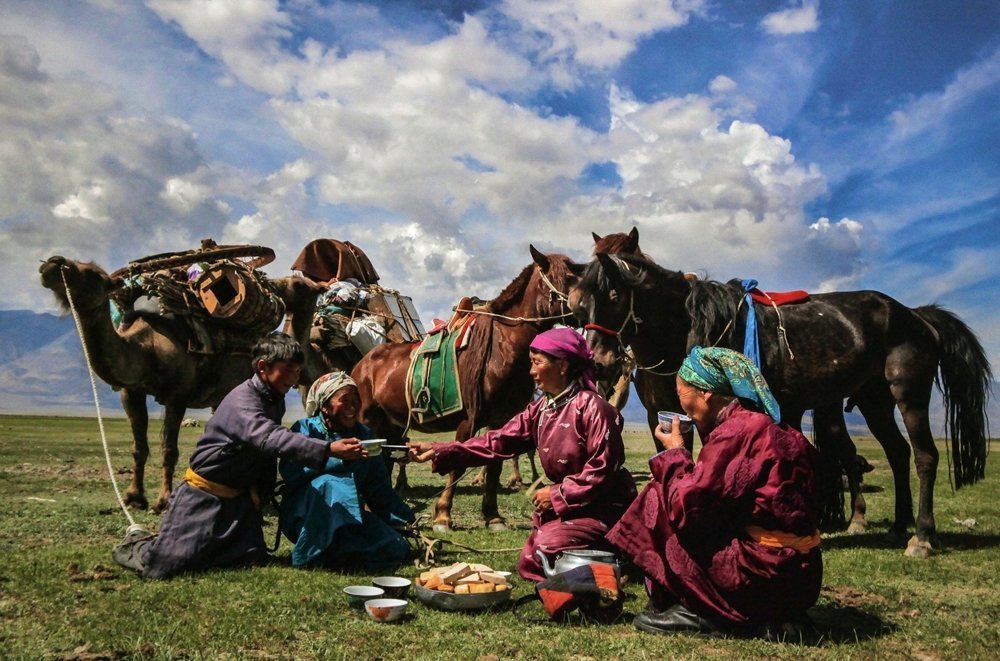 Tenderness until the age of three, traditional treatments, happy names and initiation rites

The child’s initiation takes place at the haircuts at the age of 3-5 years, during which the first traditional national costume is demonstrated. This clothing is very important in the steppe, it is warm and airtight. This is also the time of the initiation of horseback riding. The child becomes a legitimate member of the community and gets his place in the yurt. From this moment on, the parent is also more restrained in his/her affection and instead of kissing the child on the forehead before going to bed, he/she only rubs his/her nose, thus showing his/her love. The next initiation takes place at age 9. The child receives a talisman, which, according to tradition, he wears for the rest of his life. The ritual of entering adulthood takes place at the age of 15-16. And the marriage is concluded at the age of 16-17 years.

Freedom and unity with the animals

Freedom and togetherness with animals are words that perfectly describe the life in the steppe, because it is the love for animals that makes the Mongolian nomads decide to live such a way of life. It is not surprising that from childhood every kid born in a yurt and living in the steppe is united with an animal and rides it around the house at will. Sometimes children have a bell attached to their clothes so that they can be easily found. Busy parents often have no time to look after their children. The baby is mostly taken care of by a mother who combines work with motherhood. Newborns are carried all the time by parents, including the father, and there are no baby carriages. Children are very close to nature and animals, they are their main childhood companions. Little nomads are calm and polite children, they are taught from childhood to respect their elders, so they do not rebel against their parents. 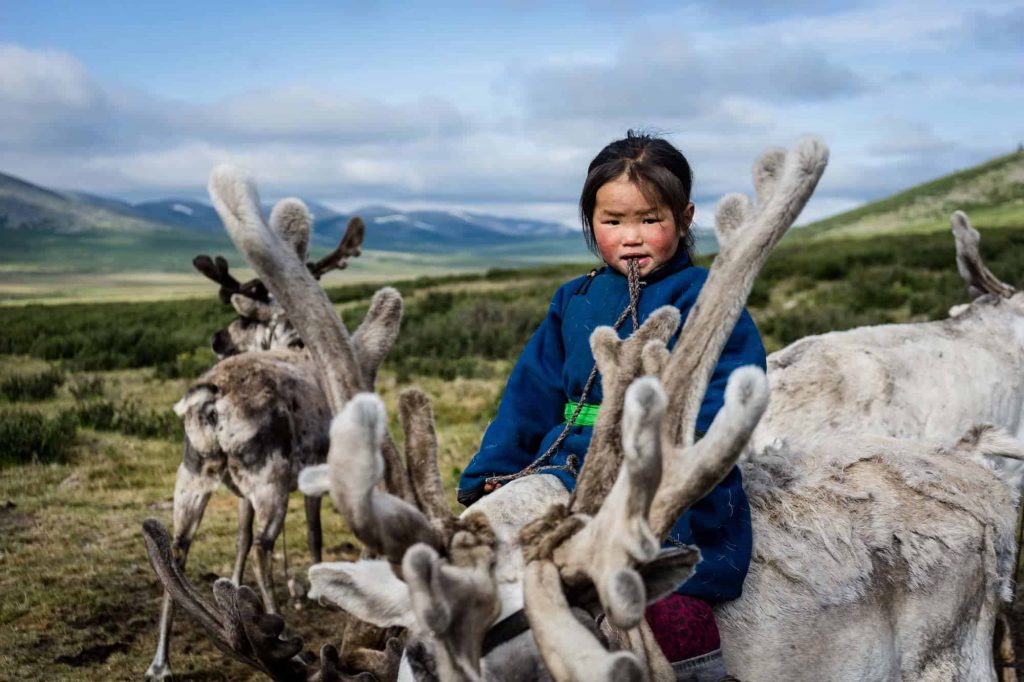 Freedom and unity with the animals

Between tradition and modernity

Life in the steppe is not easy. It is a combination of hard work and tradition. Will Mongolian nomads stay forever in their yurts in the scenic steppes? Will their children want to continue the tradition even as they learn about the modern way of life? That is not known. What is known, however, is that a childhood spent in the lap of nature is the freedom many of us want.