Gran Vía is the center of shopping and entertainment in Madrid

The Gran Vía, whose name in Spanish means “big road”, is one of the most visited places in Madrid. Not only architectural buffs will find it interesting, but also for shoppers who love bargains and bargain-basement shopping. 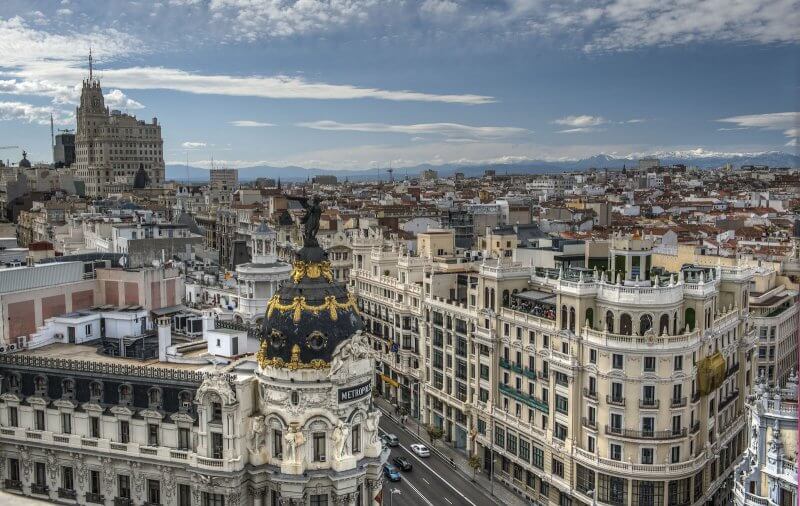 The Gran Vía is not just the main street of the Spanish capital but also its main symbol. Since its founding in the first half of the 20th century it has become one of the busiest corners of the Spanish capital, attracting visitors from all over Europe. And this is not just because of its abundance of retail outlets, but also because of its unusual architecture, which combines several styles at once – rationalism, modernism and neo-renovation.

The Gran Via Madrid can also be divided into three zones. The first, commercial, contains jewelry shops, fashion boutiques and insurance companies. The second section of the street, the largest, belongs to hotels and large department stores. The third, which extends all the way to Plaça Espanya Square, is home to nightclubs, cinemas, theaters, cafes and other entertainment venues. 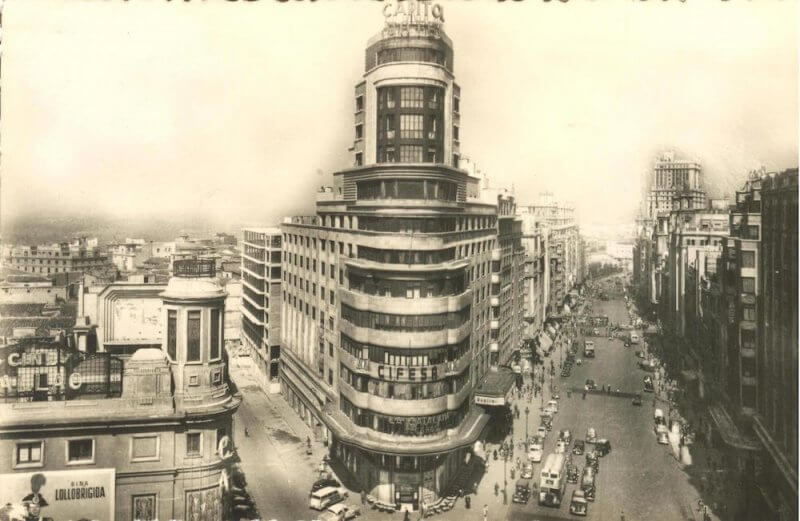 Tourists strolling down Gran Vía in Madrid have no idea that it might not have been there at all. Firstly, the original design of the boulevard, created by a famous Spanish architect back in 1862, was put aside in a long box and forgotten for 40 years. And second, even when it was finally approved, city officials faced violent protests from residents whose homes were to be demolished and street vendors opposed to the appearance of large retail outlets.

But the tribulations of the Gran Via Madrid’s history did not end there. The French banker Martin Albert Silver, who had purchased the right to sell the avenue at one of the city’s auctions, was not up to the task. The work, which had a final cost of nearly 30 million pesetas, was first suspended and then threatened with failure. The situation was saved by Spanish businessman Horacio Echeveriette Maruri, who succeeded the previous owner and brought it to its logical conclusion.

The result of his labors was the new city boulevard, which was 35 meters wide and 1,315 meters long. In order for it to appear on the map of Madrid, the builders had to make enormous efforts: during the construction more than 300 houses were demolished, 14 houses were destroyed and 55 nearby streets were shortened, many old trees were replanted and a lot of buildings were rebuilt. 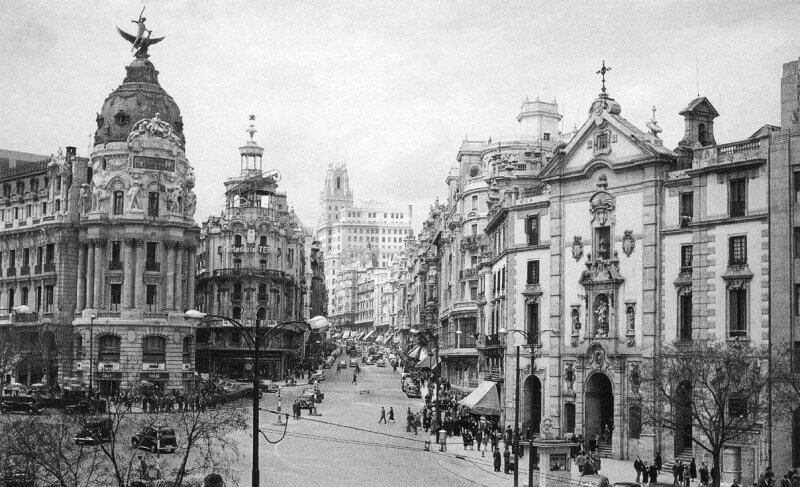 What to see on the street?

The Gran Vía in Madrid is not only famous for its history but also for its many architectural monuments, the oldest of which is the Oportoria de Caballero de Gracia, built during the first half of the 16th century. This monumental building, built for an insurance company in 1911, can be recognized by its classical architecture and its high dome topped with a marble statue of the goddess Nika. 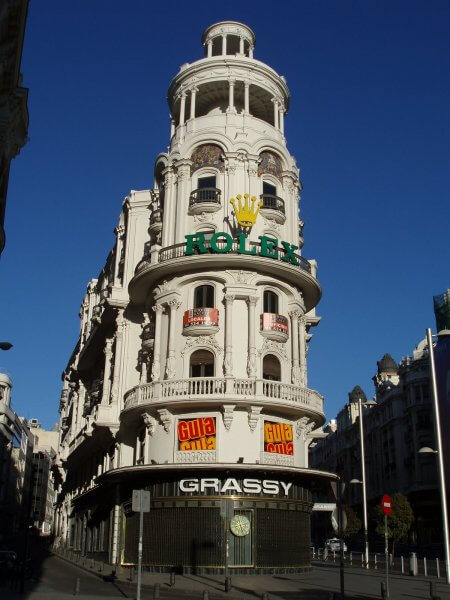 Another of Gran Via Madrid’s oldest buildings is the Cultural Center of the Army and Navy, whose interior decoration is striking in its beauty and sophistication. Next comes Grassi, a unique structure created especially for the jewelry firm of the same name and complemented by an unusual spherical tower.

Another decoration of the most famous avenue of the Spanish capital is the Hotel Senator, a luxurious four-star hotel, which has an excellent viewing platform and a large outdoor pool on the roof. Directly opposite it you can see another famous landmark of the city. We are talking about the 80-meter Telefonica, which at the time of its appearance in 1930 was considered the tallest building in Europe. You can recognize this “house” by the luminous clock placed on the facade.

Go a little further and you will see the famous Palace of Music, which at one time played two roles at once – the main cinema and a concert venue. Other Gran Vía architectural landmarks include the famous “Tea Room” which is considered to be the founder of light advertising in Madrid, the Gran Peña Café which serves delicious coffee and the “Chicote Bar” which has not changed its interior since 1931. 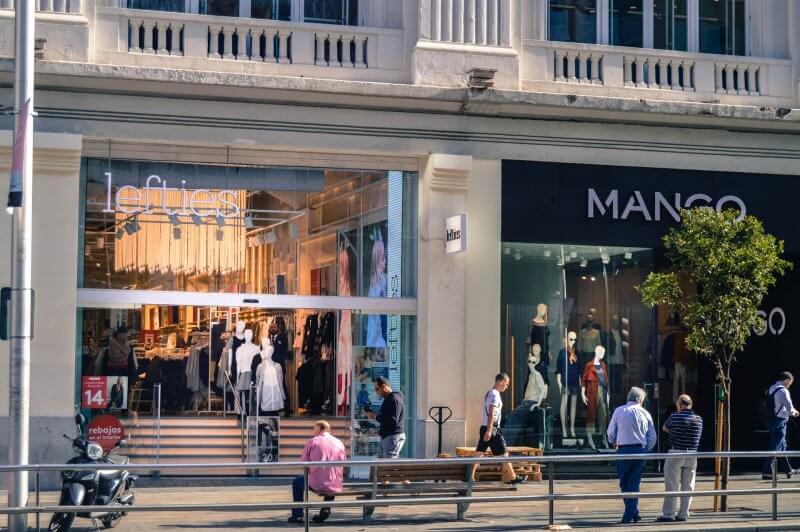 As the center of Madrid’s shopping life, Gran Vía del Sol will delight shopping lovers with a huge number of hypermarkets, fashion boutiques, souvenir shops and a variety of stores selling everything you want. There are world famous brands (H&M, Adidas, Mango, Bershka, Stradivarius, New Balance, Lefties, etc.), as well as popular Spanish brands offering quality goods at affordable prices (Pull & Bear, OYSHO, Calzedonia, etc.). It’s also worth mentioning that most of them have discounts up to 50 percent off the original price, so you’re unlikely to go home without your purchases.

The souvenir store belonging to the professional soccer club “Real Madrid” is also a popular place. Prices there, of course, bite, but true soccer fans do not stop it. But housewives and lovers of home comfort will certainly appreciate the network of “ALE-HOP” stores, famous for its wide range of textiles, gifts, decorative elements and all kinds of original gizmos.

El Corte Ingles Hypermarket is another place you can buy not only clothes, dishes, cosmetics, furniture and household appliances, but also various delicacies. The Loewe luxury boutique, the Sans jewellers’ shop and the Grassy watch store are the pride of Gran Via Madrid, which have been around since time immemorial. 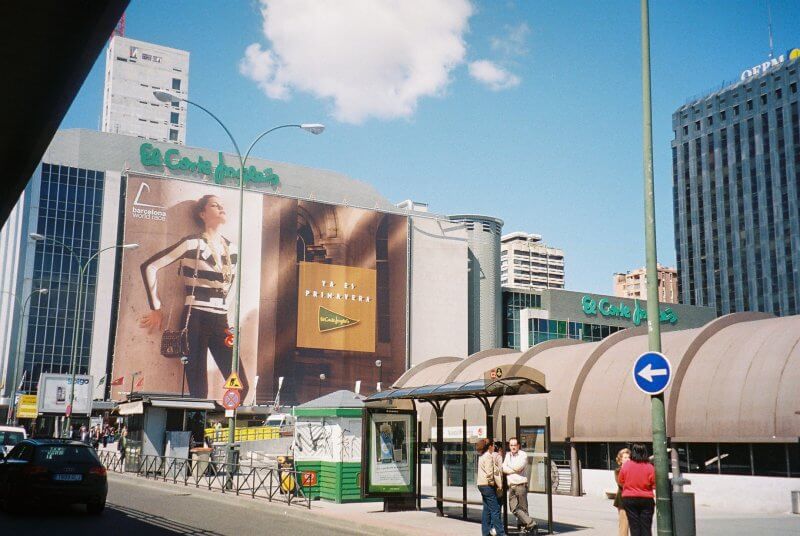 When heading to Gran Vía in Madrid, be sure to pick a few helpful suggestions: 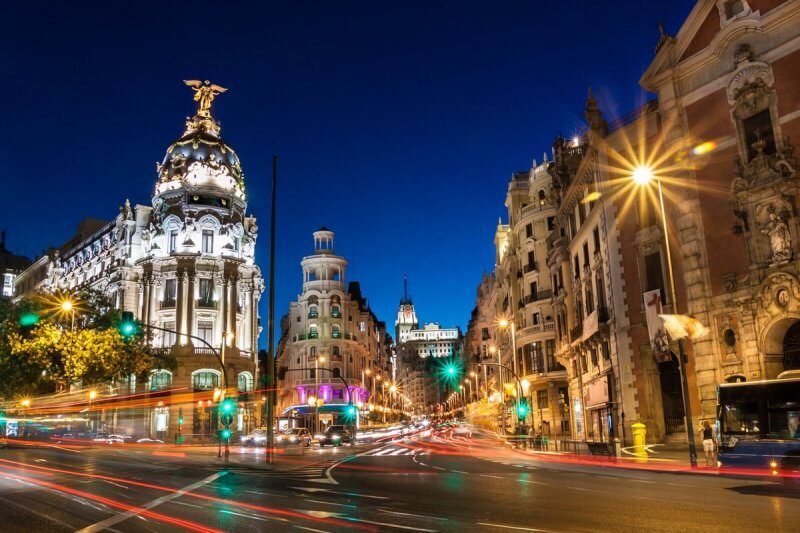 El Corte Ingles – one of the largest hypermarkets in Madrid:

Updated: 12 Jan, 2020 The Barajas Airport, which receives international flights, is located in the city of…

Updated: 28 Nov, 2019 The Madrid Metro is one of the fastest, most comfortable…

Updated: 17 Oct, 2021 Gran Canaria is one of the largest islands of the Canary archipelago,…

In Madrid, the role of the main street is the Gran Vía. Since the moment of its construction at the beginning of the XX century the street became one of the most important in the Spanish capital from commercial, tourist and cultural – leisure point of view. 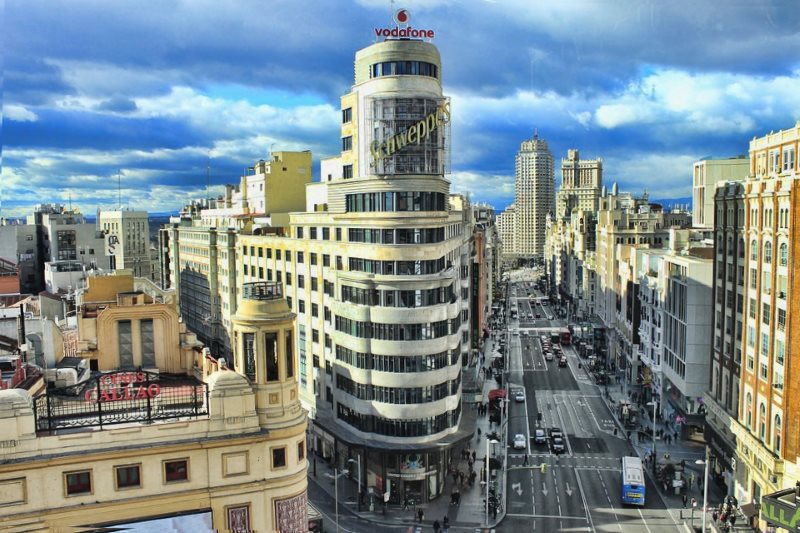 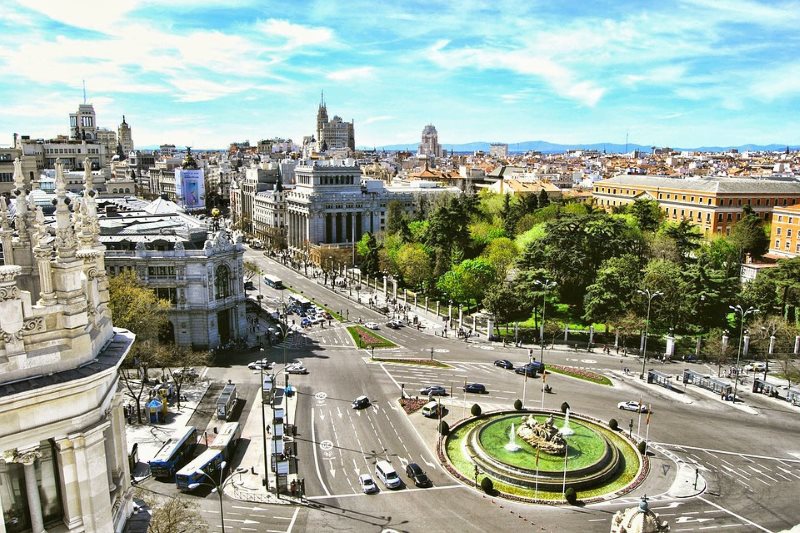 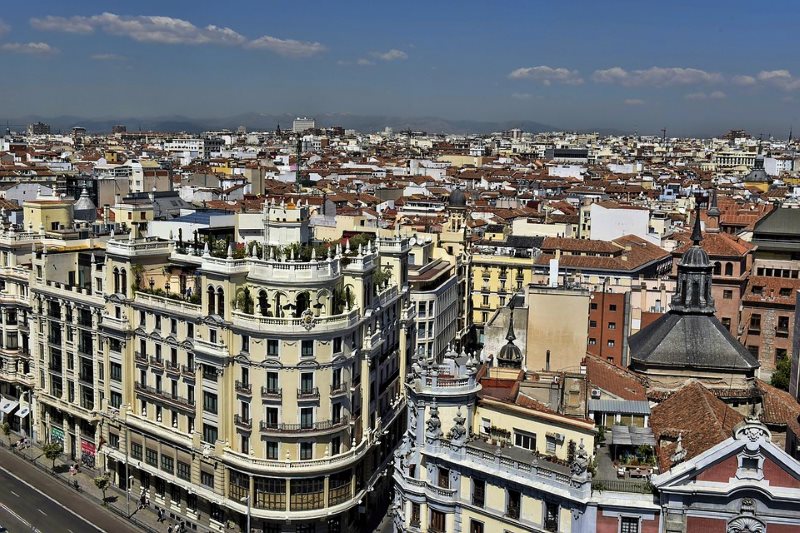 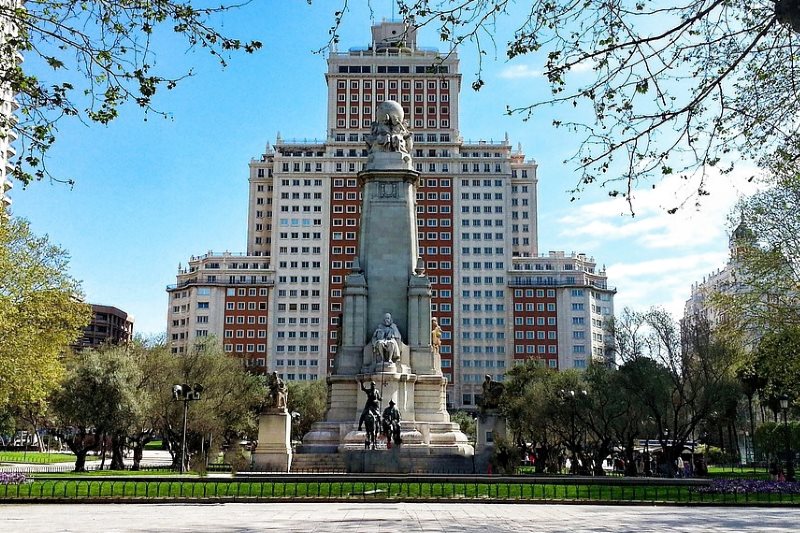 History of the Gran Vía in Madrid

The Gran Vía in Madrid starts from Alcalá Street and ends up on Plaza España. The capital’s authorities thought about reconstructing the location of the current Gran Vía back in 1862. But only 40 years later, the Madrid City Hall, together with the French financier concluded an agreement to begin construction of the street, which proceeded and the architects and workers in April 1910. The complete transformation of the “great road” was completed in 1952.

For the construction of the Gran Vía 312 buildings were demolished and 48 streets were transformed. The closest street Princesa was lowered by almost 4 meters: for this purpose the walls of many buildings were reinforced, and the first floors and basements with foundations were rebuilt. Partially uncut trees were replanted near the buildings. Such large-scale transformations required serious investment. But it was well worth it. The Gran Vía provided a convenient connection between downtown Madrid (Calle Alcalá) and the north-east of Madrid (Plaza de España).

But the purpose of building the street was not only to connect it to the traffic. The Gran Vía was designed as a meeting place for city dwellers and as an area for walks and entertainment. For commercial purposes, the first big stores of the city with colorful store windows, huge cinemas, luxurious cafes, which became very popular in the first decades of the street’s existence, were placed here. 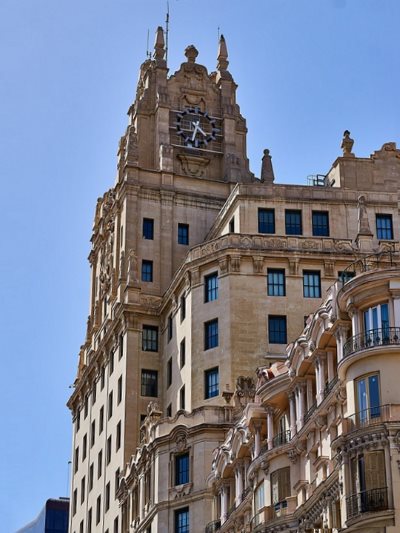 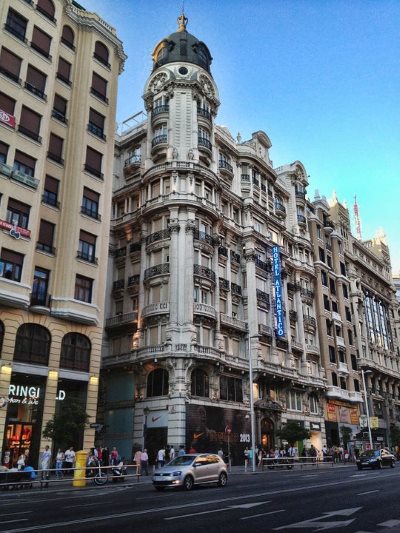 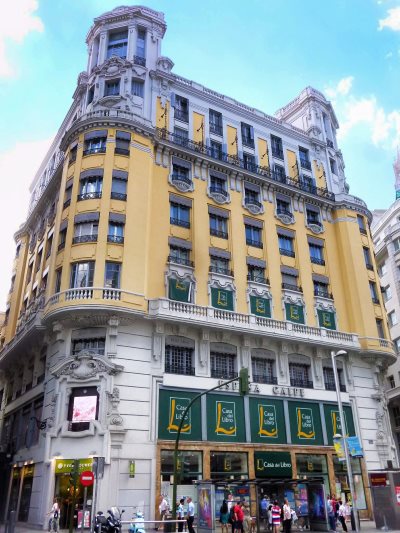 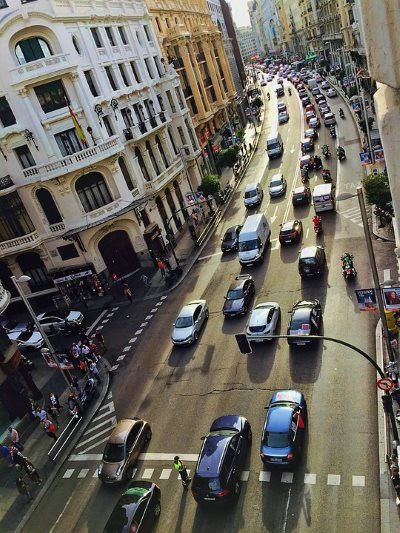 Gran Vía street in Madrid is a kind of architectural encyclopedia. After all, during the construction of a few decades it was infused with the influences of the new emerging time, which affected the style and design of buildings. Architects saw the Gran Vía in three architectural styles: Neo-Renaissance, French and Art Nouveau and American rationalism.

The Gran Vía can be divided into three zones . The first part is the shopping area. Fashion stores, jewelry stores, car dealerships, and insurance companies were built here. On the largest, second part were large department stores and hotels. The third part, which stretches to Plaza de España, was planned to house entertainment buildings such as cinemas, theaters, nightclubs, and cafes.

What to see on Gran Vía in Madrid

Let’s take a look at the most famous buildings that are on the famous Gran Vía in Madrid.

One of the oldest buildings on Metropolis is located at the intersection of Gran Via and Alcalá Street. It was built in 1911 for an insurance company according to the plan of the Fevrier brothers. The building was made according to the rules of classical architecture. It is crowned by a dome with a statue of the goddess Nika, who replaced the Phoenix bird in 1972.

2. The Grassi building on Gran Via was built in 1917 for the jewelry firm of the same name. The house is adorned by a spherical white tower noticeable from a distance.

READ
Igalo - a resort for every tourist

3. The Officers’ House, or Army and Navy Cultural Center, is located in an old building dating from 1916. It used to be the site of an officers’ club called the Casino Militar. Its interior decoration is striking in its beauty and sophistication.

4. Among the oldest buildings of the Gran Via is the 16th century church of Oratorio Caballero de Gracia . In 1795 the church was reconstructed using the proceeds of the first Royal Lottery.

5. On Gran Vía in Madrid there is also the luxurious Hotel Senator 4* . The hotel is interesting because the elevator in its courtyard lifts the inhabitants of the hotel and visitors to the Spanish capital on the roof with a pool and a magnificent panoramic view.

6. On the opposite side of the hotel rises Europe’s first skyscraper. Birthday of a skyscraper at 81 m – 1930, for a while the building was considered the highest in Europe. In 1967 the tower was equipped with a clock, and recently the chimes were presented in a halo of light.

7. A little further down the street is the Palacio de la Música (Palace of Music). In the past, the palace was a cinema and concert hall.

8. Another high-rise is Los Sótanos, built in the mid-1940s. It is divided into the fashionable hotel “Imperador” and the Theater of Lope de Vega, the famous Spanish playwright, poet and novelist.