Cappadocia and all of Turkey

Cappadocia and all of Turkey – photos, maps, useful tips

Goreme – the tourist center of Cappadocia

Goreme – the center of Cappadocia

Göreme is a small town that is rightly considered the tourist center of Cappadocia. Despite the fact that the administrative center of the region is the town of Nevshehir, the main stopping point for tourists to get to the main attractions of Cappadocia is this small town with an unusual landscape. The bus stop is on the main square. On different sides of the square are many restaurants, cafes, ATMs, and several rental agencies for cars, bikes and ATVs. Travel agencies that offer day trips in Cappadocia are also located around this main square. 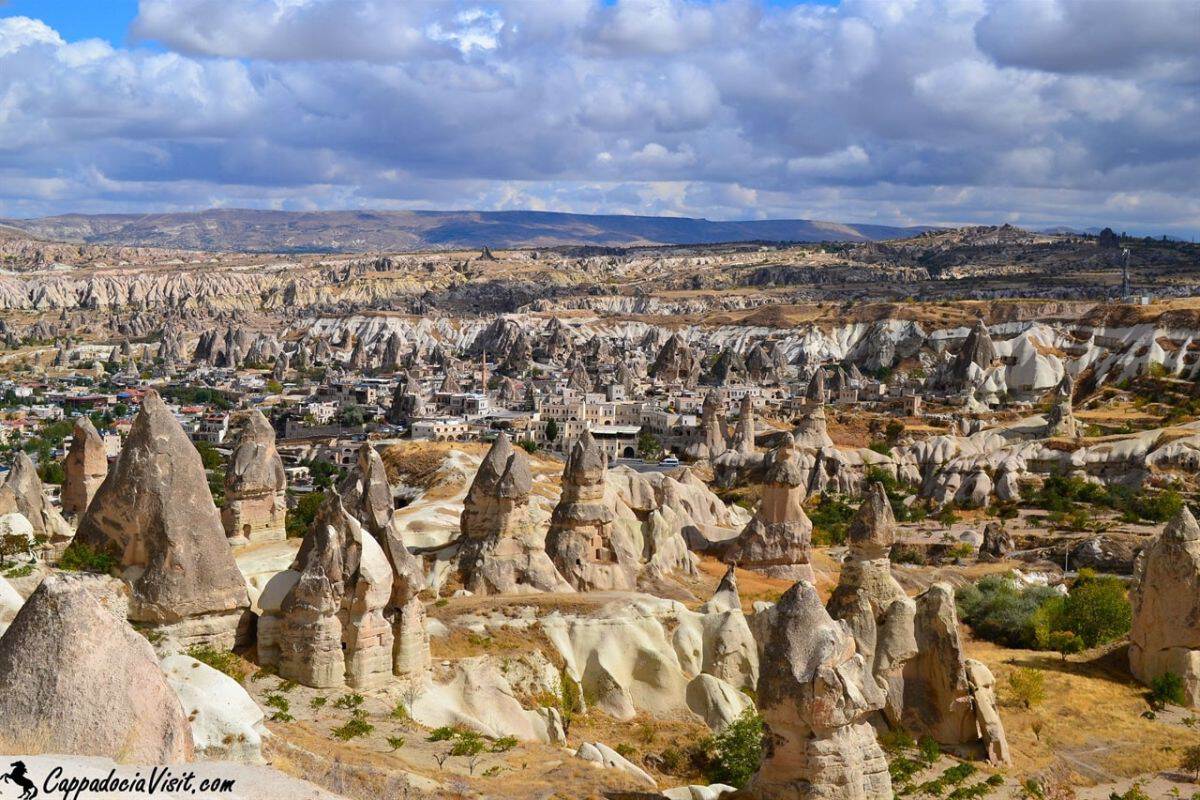 Goreme – the tourist center of Cappadocia

A Short History of Goreme

The valley in which Goreme and dozens of neighboring valleys were formed by the eruptions of the Erciyes, Gulludag, and Hasandag volcanoes. Over millions of years they filled the local space with ash and hot lava, solidifying in the most bizarre combinations and shapes. Then water and wind did their work. Humans had a hand in this transformation, too, living here for hundreds of thousands of years and adapting much of the rock formations for housing and outbuildings. Throughout its long history, the township has had five different names. Its oldest name is said to be Korama; its Byzantine name was Matiana; the Christian Armenians called it Macan; the Turks called it Avcılar; and only later it was renamed to Göreme. 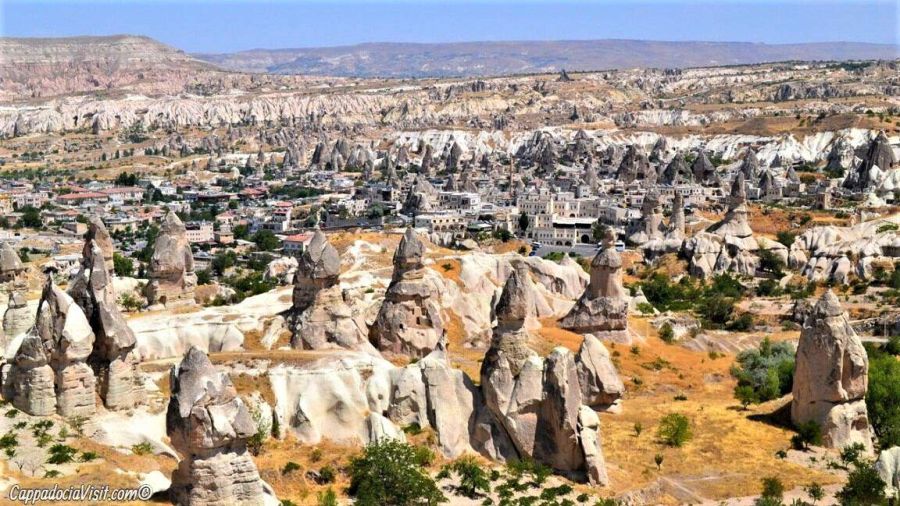 Goreme – The Capital of Cappadocia

READ
From Mont Blanc to the Côte d'Azur. Route GR5 - a drive through the French Alps

The ensemble of churches which we see in the surroundings of the town appeared roughly after 850. The frescoes that adorn them can be attributed to the second half of the 11th century. The style of the murals, inspired by works of evident Byzantine origin, is characterized by an extraordinary simplicity. The architectural décor is admirably combined with paintings done by professional artists thanks to the patronage of the arts that was widespread at the time. Many inscriptions (sometimes accompanied by portraits) introduce us to the names of artists and donors. According to historical and iconographic research, donors were usually noble and wealthy members of the rural community, who formed unions with the aim of financing works of art. Due to the moisture-proof nature of the tufa and the constant climate inside the building, which is not subject to fluctuations in ambient temperature, the colors here have retained their brightness over the centuries. Biblical and evangelical subjects are accompanied by inscriptions in Greek, but in Cyrillic. 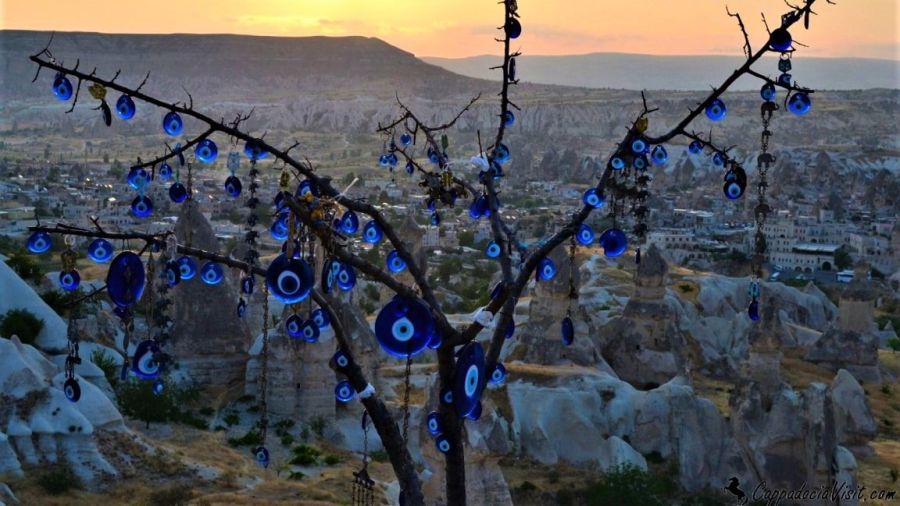 Sunrise – Tree ornaments are beads against the evil eye

In addition to the historical sites, there are many natural attractions around the city. The town is the center of the eponymous “National Historical and Natural Park”, which covers an area of 300 km². At the bottom of the article there is a map on which you can see the location of the national park. On the map the area of the national park is marked in green. The Valley of Love, Pigeon valley, valleys Meskendir, Red and Pink, all of them are included in the national park. Cappadocia National Park and Cave Villages are a UNESCO World Heritage Site.

What to do in Göreme?

Göreme , is the best place to start discovering Cappadocia attractions . Hiking around the city is a favorite pastime of tourists. If the long walks through the valleys adjacent to the town scare you, you can rent a bicycle, motorcycle or quad bike and ride around the valleys. If you like horses and horseback riding, you can also go horseback riding around the town. Of course, these are not all the ways you can spend time in and around the town. See what other activities and excursions are offered here.

READ
What places to see in Latvia? 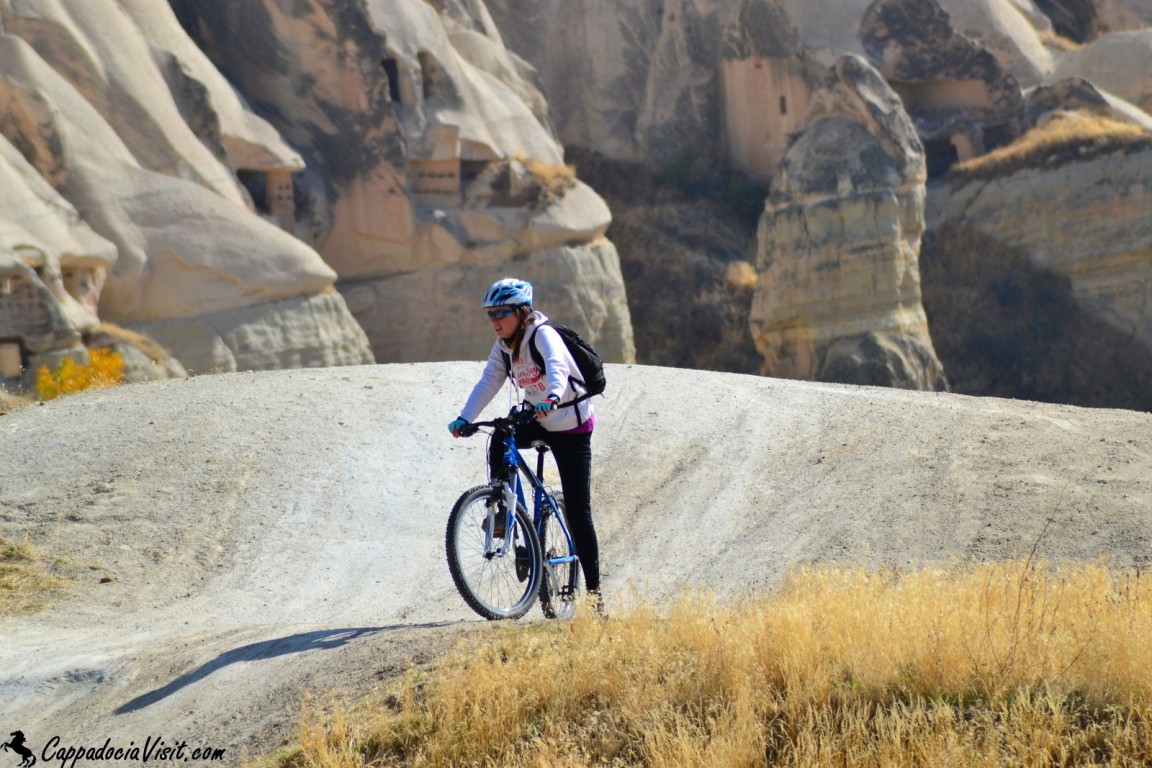 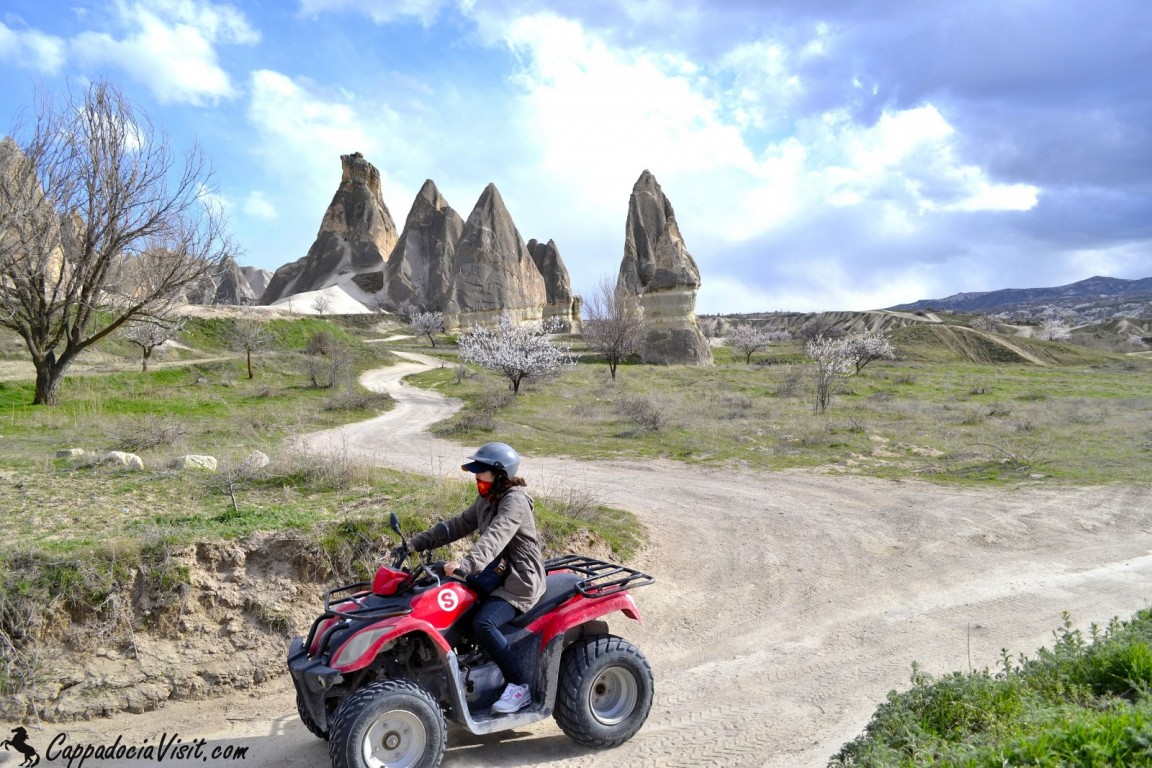 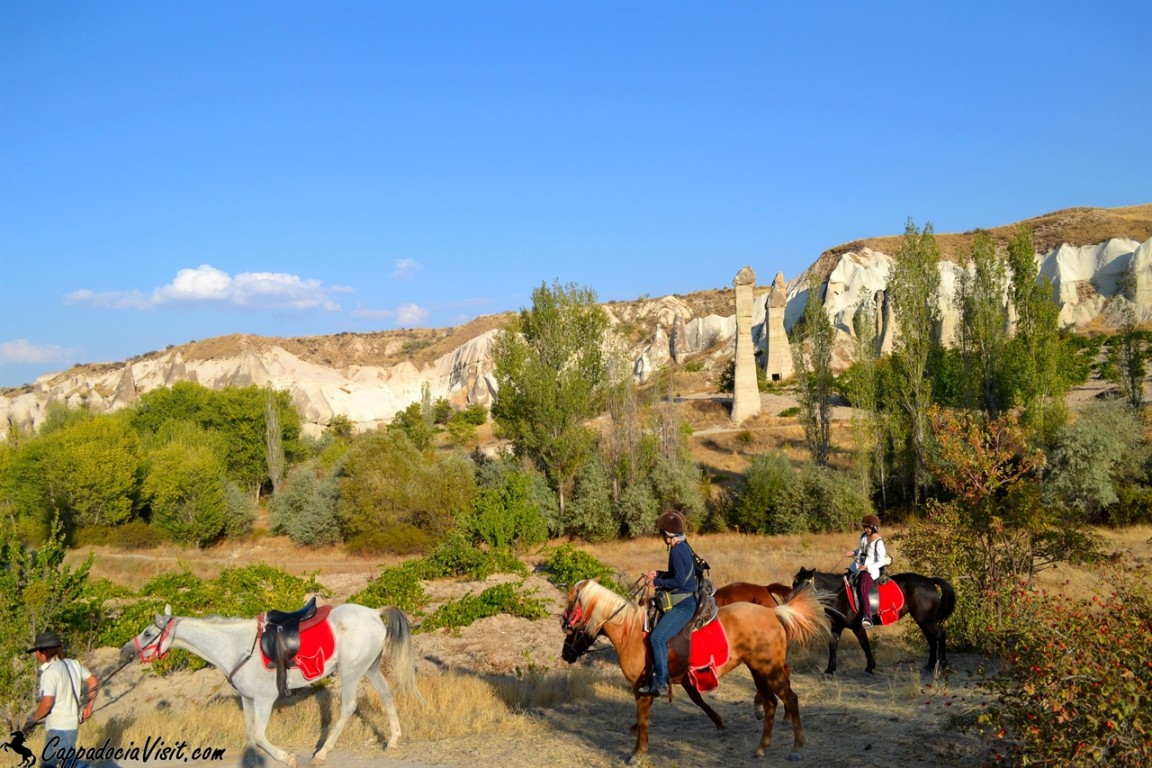 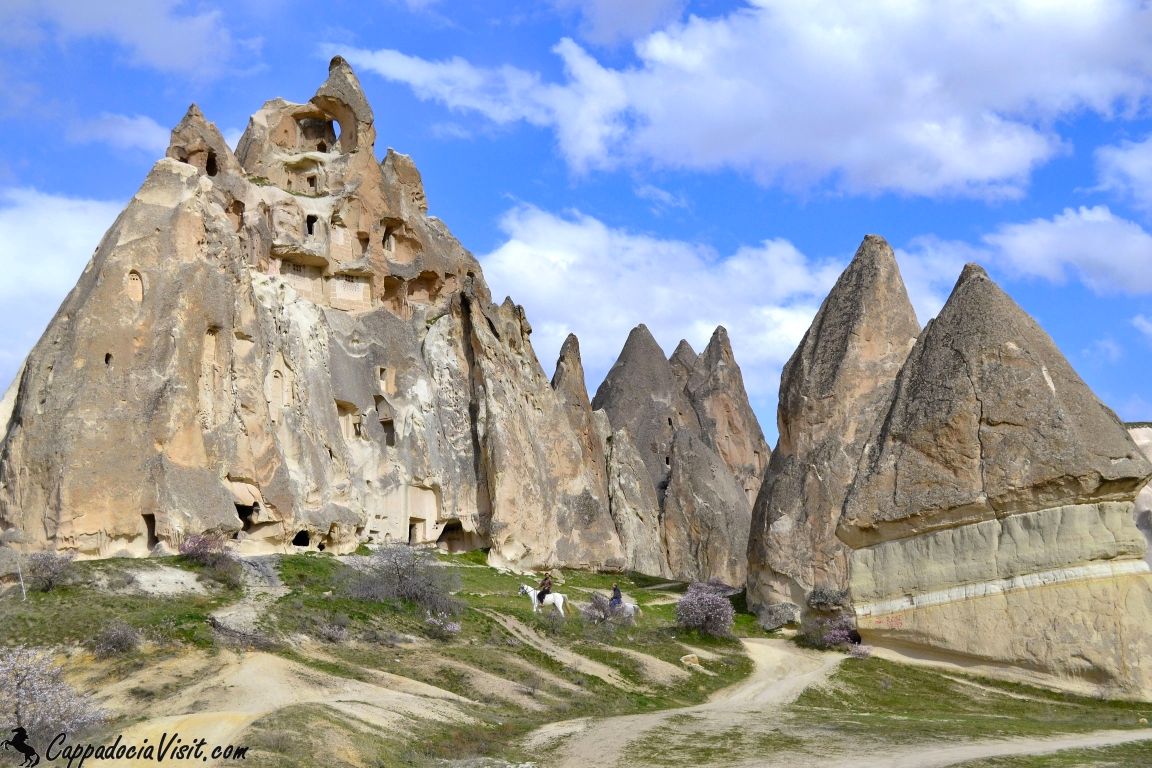 How to get to Goreme?

All Göreme bus lines (Kamil Koç, Süha, Metro) either travel through Göreme or go to Nevşehir and from there transfer to a shuttle-bus to Göreme, Üçhisar, Ürgüp or Avanos. You can find the bus timetable for Nevşehir bus station by following this link. How to get to Cappadocia is described in more detail in this article →.

The city has a large variety of hotels for all tastes and pockets, from simple pensions in the rocks to expensive stylish mini-hotels. Locations of some of the hotels you can find by clicking on the link below. Read here how to choose and book a hotel in Cappadocia.