Berlin is often referred to as the capital of street art because it’s everywhere: in bohemian districts, art galleries, on abandoned houses and the facades of apartment buildings in the east of the city. Unlike other European cities, where street art appeared in the 1980s, murals and graffiti began to appear on the Berlin Wall as early as the 1960s, and the city has been covered with new coats of paint nonstop since then. Building owners and the state invite artists from all over the world to paint for royalties, and galleries constantly hold exhibitions and festivals. Street art has become as integral to Berlin as the Reichstag, the Brandenburg Gate, and techno parties.

Today we’re taking a look at some of Berlin’s most popular forms of street art: murals (frescoes on the facades and walls of buildings). The most famous of them are located in three districts of Berlin: Prenzlauer Berg, Kreuzberg and Schöneberg, and can be viewed in a day. Murals differ from graffiti in that they are created with permission from the authorities, they are not knocked down, not painted over, and they are understandable to everyone. 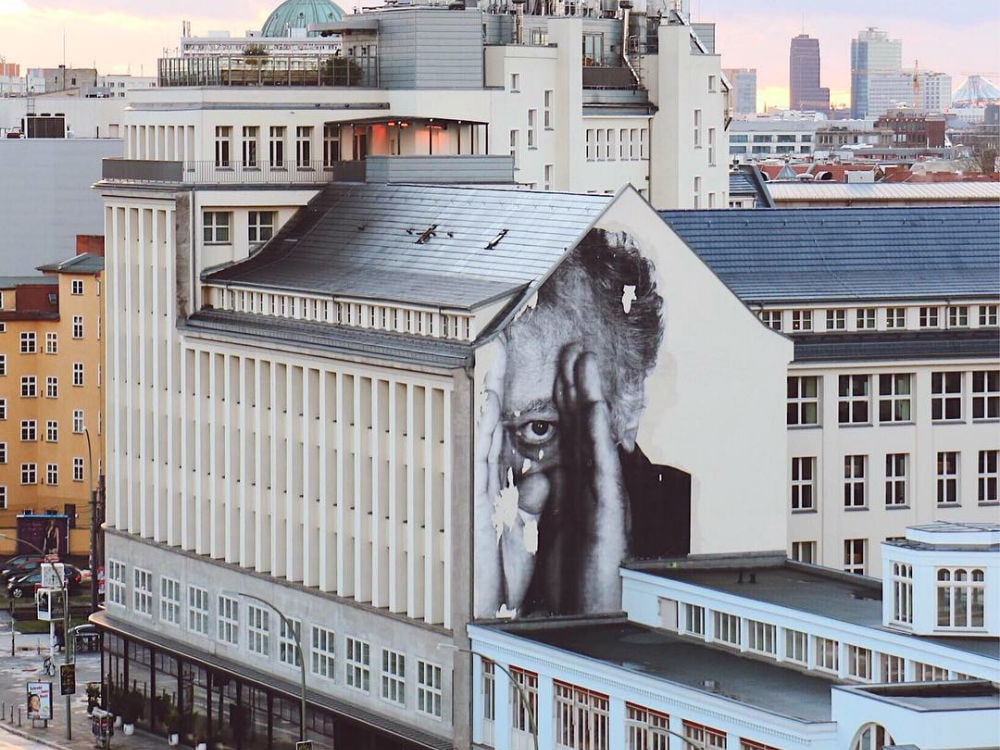 This is one of the works of the Wrinkles of the City project, in which street art artist JR has placed huge black and white photographs of elderly Berliners on 15 walls and facades of high-rises to show how the city and its residents changed in the 20th century. JR is a French artist who lives and works in Paris and Berlin and has exhibited in America, Asia and Europe. Of his 15 murals in Berlin, one survived, in the Prenzlauer Berg district, the others were gradually destroyed by snow and rain.

Address: facade of the house on Torstraße 1 on the Prenzlauer Allee side, 10119 Berlin.

READ
The 8 best things to do in Illulissat, Greenland 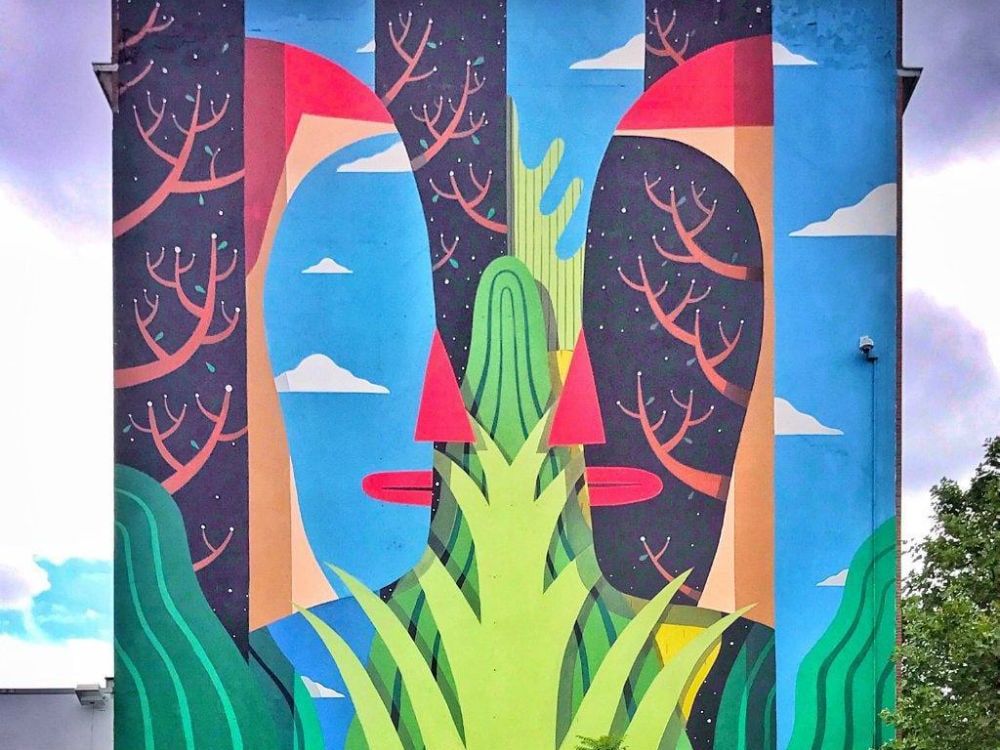 This striking mural by the Italian artist was created as part of the We are Creative in Puglia project for the 26th anniversary of the fall of the Berlin Wall. It is located in a very special place: it was here, on Heinrich-Heine-Straße, the crossing point between West and East Berlin. The fresco depicts two faces facing each other, they symbolize day and night, as well as the unbreakable bond between the inhabitants of the city, divided by the Berlin Wall. The author of the work is the Italian artist-illustrator Agostino Iacurci, who became interested in street art in 2008 and since then he has created more than 20 murals all over the world. The distinctive features of his style are laconicism, bright colors and simplified forms. 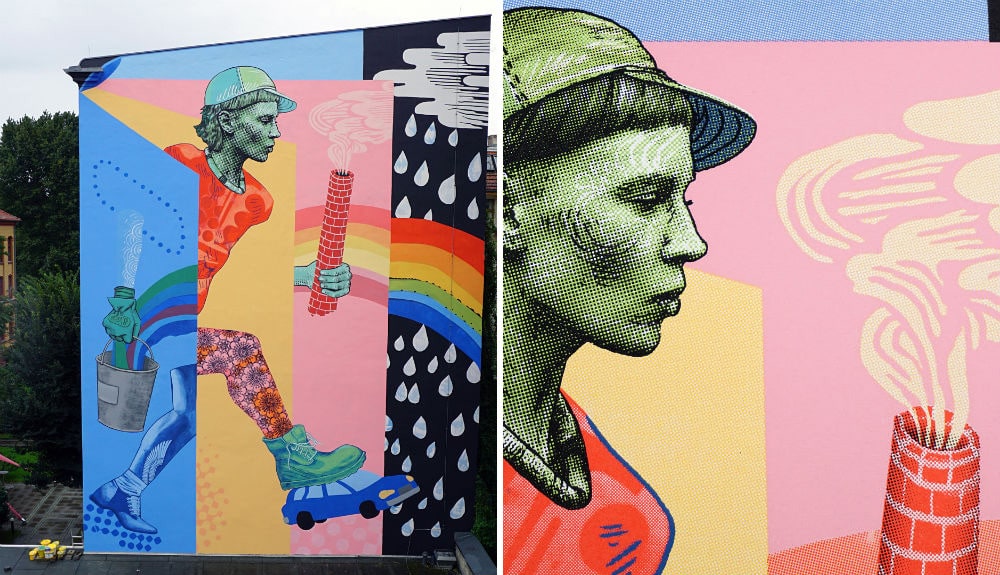 Various & Gould is a duo of young artists from Berlin known for their installations, silkscreen posters and murals, which they exhibit on the streets of the city as well as in art galleries in Germany, England and America. In their work, the artists often address themes of ecology and social and racial inequality. Their latest mural, “Dedicated to,” was done in 2017 on the facade of the Hotel Oderberger Berlin. It depicts a worker walking through a surreal space with a smoking pipe in his hand. 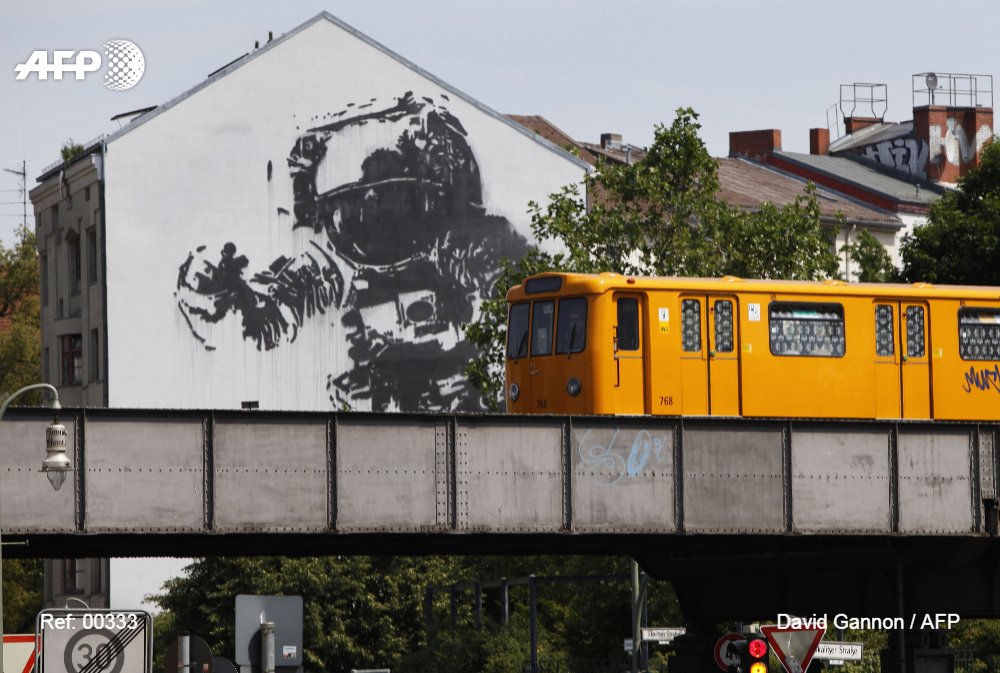 This mural with an enormous cosmonaut floating in the street was created during the Berlin Backups Art Festival in 2007 and quickly became one of the symbols of Kreuzberg. In the darkness, the wall with the astronaut, which is illuminated by spotlights, is shadowed by a flag mounted on a neighboring building. It makes it appear as if the astronaut is planting a flag on the moon, a reminder of the confrontation between the Soviet Union and the United States during the Cold War. The muralist Viktor Ash was born in Portugal, grew up in France and lives in Denmark. His works are often politically motivated.

READ
How to spend a day on Waiheke Island. New Zealand 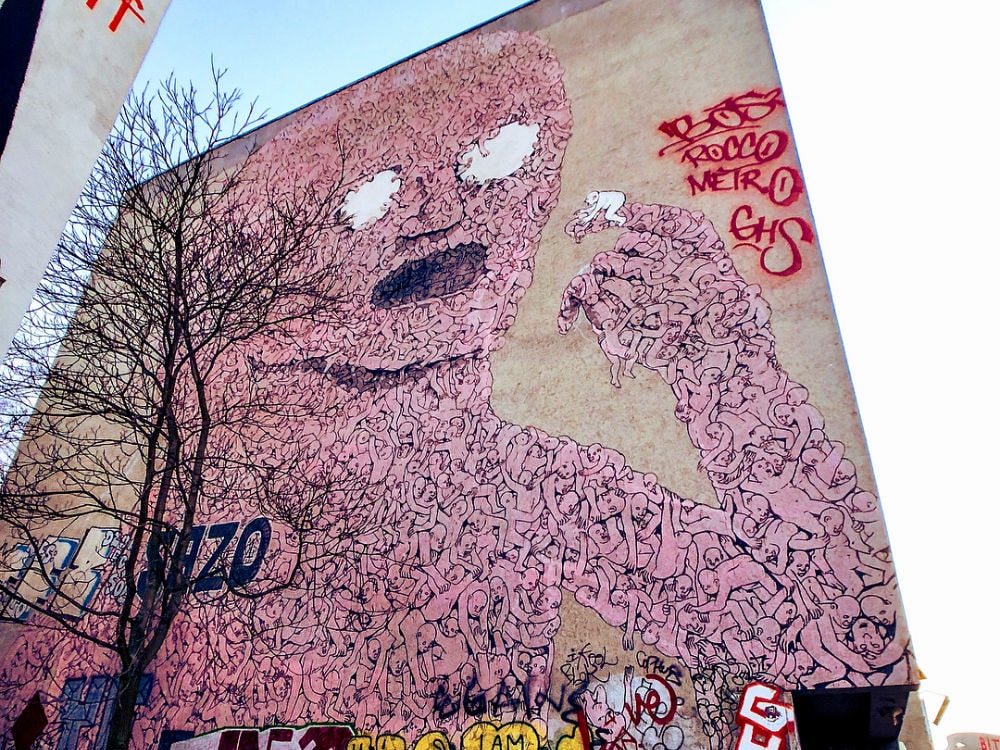 A mural with a huge pink monster consisting of hundreds of little people eating themselves appeared as part of the Backjumps Festival street art in 2007. The author of this mural is the well known street artist from Bologna, working under the pseudonym Blu, who has been creating murals around the world since 1999. Each of the murals is made for a specific building, fits perfectly into its surroundings and features sharp social satire. “The Pink Man” criticizes the cruelty and senselessness of consumer society.

Address: Falckensteinstrasse 48, next to the Oberbaum Bridge.

6. “Nature Morte” by the artist Roa in the Schöneberg neighborhood. 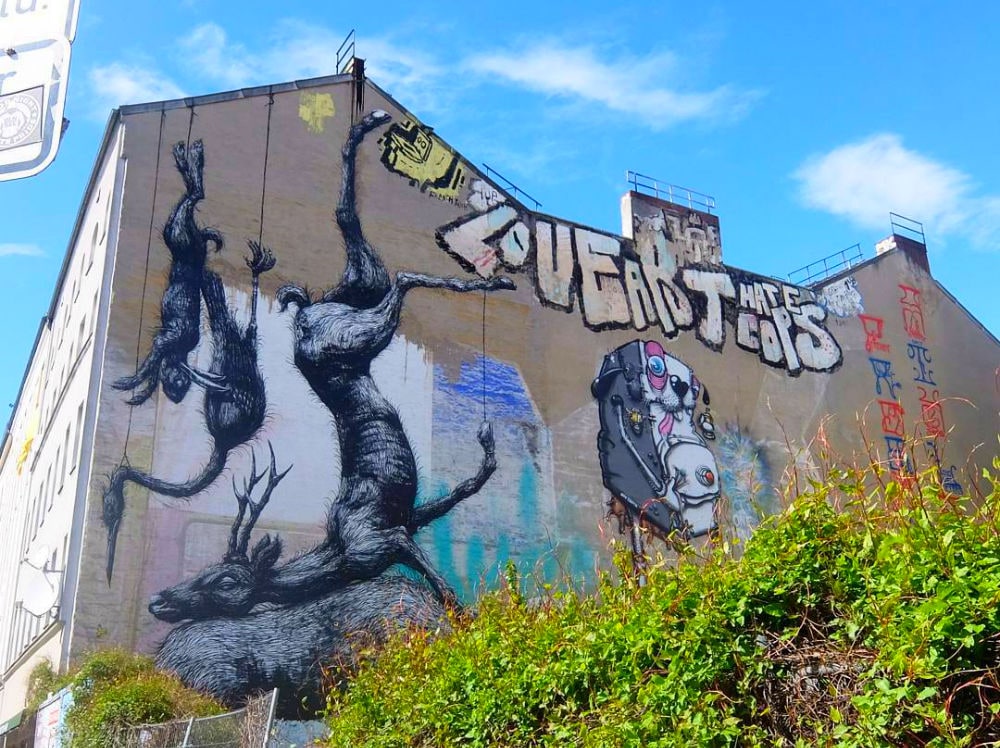 This mural is one of the most famous and shocking in Berlin. It was created in 2011 during the Transit street art festival organized by the Skalitzers Contemporary Art Gallery. The mural realistically depicts dead hare, heron and roe deer hanging by their paws. Below the roe deer lies the carcass of a goat. The author of the mural, the Belgian artist Roa began painting black and white murals at the age of 13 and quickly rose to fame. Most often he depicts wild and domestic animals. The artist has repeatedly spoken out against hunting for pleasure and painted this work for the same purpose.

Address: Oranienstraße 2, near the subway station U Görlitzer Bahnhof, 10997 Berlin.

British cartoonist and illustrator Phlegm executed this mural as part of the One Wall Project. The artist used to work in book illustration, but in recent years he has become interested in street art. Most of his murals feature characters from his comics, which, as the artist puts it, “inhabit and transform urban spaces. Phlegm’s work is characterized by its complex composition, many detailed characters, and masterful manipulation of the surrounding space.

Address: Parking lot at the intersection of Alvenslebenstraße and Kirchbachstraße, 10783 Berlin.

8. “Elephant Playing with World Balloon” by artist Jadore Tong in the Kreuzberg neighborhood

This is one of Berlin’s brightest and most cheerful murals. It depicts, in a realistic manner, an elephant playing with the Earth in the form of an inflatable balloon. Its author, Berlin-based French-Colombian artist Jadore Tong, aka S.Y.R.U.S., is equally known as a muralist, designer and illustrator. Most of his works have no pronounced social subtext, but are characterized by bright colors, detail, and a high level of realism.

Address: Back of the house on Wilhelmstraße 7, next to the basketball court.

9. The mural of the Os Gêmeos collective in Kreuzberg 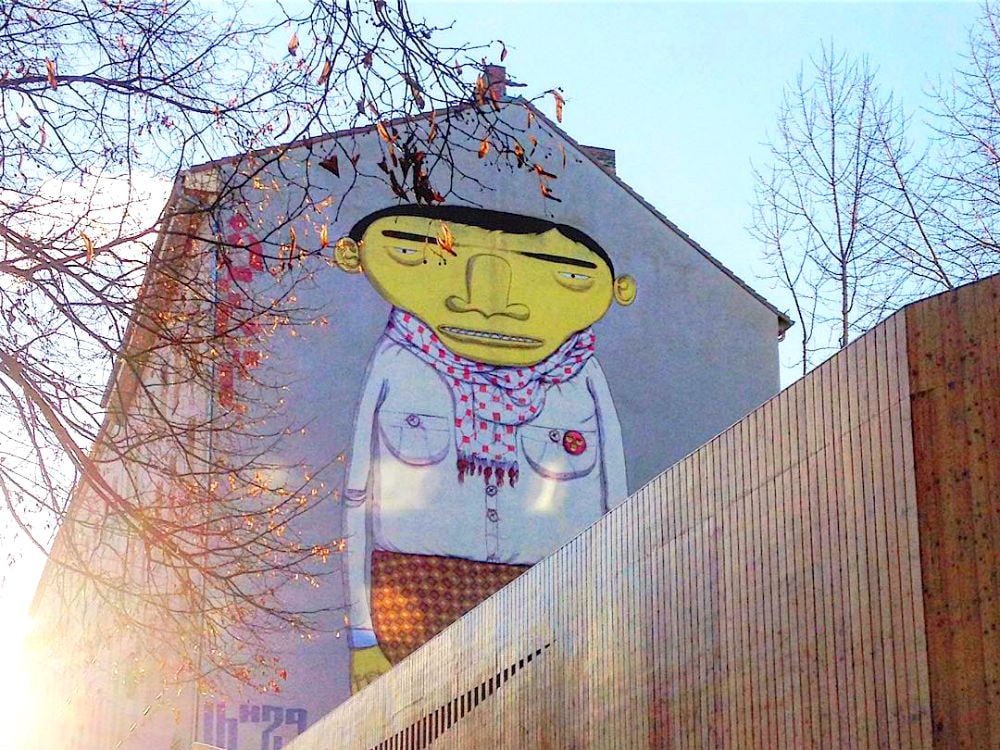 The Yellow Man is one of Berlin’s most famous murals, created in 2005 as part of Deitch Projects. Its authors are Brazilian twin brothers Otavio and Gustavo Pandolfo, working under the name Os Gêmeos. The artists create murals, graffiti and installations all over the world, the main characters of their murals are yellow men with big heads and thin limbs, who either occupy the entire wall space alone or are part of a colorful fantasy world.

10. “Rounded Heads” by artist Nomad in the Kreuzberg neighborhood 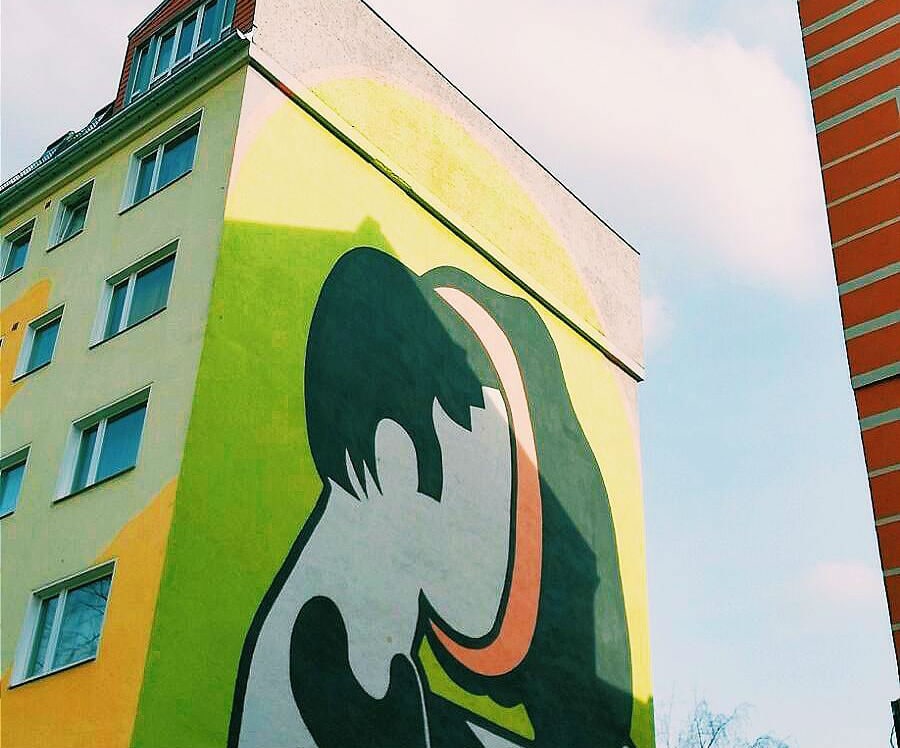 Nomad is one of Berlin’s most famous street art artists. During his 20 years in the city, he has created several thousand graffiti of all kinds and sizes, from murals to graffiti markers on walls and trash cans. Nomad has no style of his own – he describes himself as a worldwide vagabond, using any materials, techniques and styles so as not to limit his creative impulse. Rounded Heads, in which pictorially drawn characters consume each other, is considered one of Berlin’s most popular murals. After seeing this mural in 2009, actors Demi Moore and Ashton Kutcher asked the artist to decorate their villa, and he agreed.