European Capital of Culture 2020. What to see in Galway, Ireland.

The medieval city of Galway (Gaillimh) is located on the banks of the River Corrib in Western Ireland. The historic city will become the European Capital of Culture in 2020 along with Rijeka in Croatia. Galway was once ruled by fourteen merchant families, called the Galway Tribes, so the city is also nicknamed the “City of the Tribes.” With a large art and music scene, there is plenty to see and do in this lively city. From the pulsating nightlife and fun festivals to the breathtaking scenery of the islands of Aran and Connemara, your time in Galway is sure to be unforgettable. 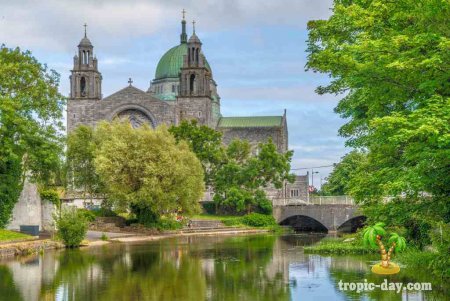 The Cathedral of Our Lady of the Heavenly Ascended and St. Nicholas, commonly called Galway Cathedral, is one of the most impressive sights in the city. Built in 1965 on the site of the old city jail, the cathedral is the last large stone cathedral built in Europe. It is a beautiful combination of architectural styles with elements of Renaissance, Romanesque and Gothic. The cathedral has a magnificent collection of artwork and beautiful rose windows. 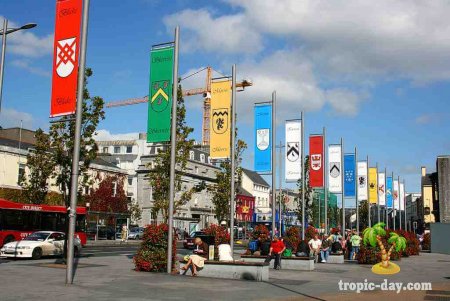 Historic Air Square, also known as John F. Kennedy Memorial Park, is one of the most popular places in Galway. The parcel of land that was converted into Eyre Square was officially donated to the city in 1710 by Mayor Edward Eyre. There are several iconic installations representing important eras of Irish history. A striking rust-colored fountain represents the area’s traditional sailing ships. 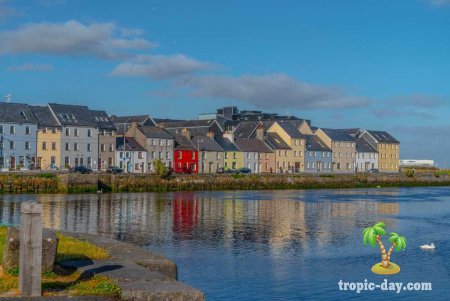 Near the center of Galway, where the River Corrib flows into Galway Bay, you’ll find the former fishing village of Claddagh. The fishing village, just beyond the city walls across the river from the Spanish Arch, was once the oldest fishing village in Ireland, ruled by an elected king. The original village of thatched cottages was replaced by a municipal housing plan in the 1930s.The famous Claddagh ring with two interlocking hands holding a crowned heart is said to have originated in Claddagh.

READ
When to go to Strasbourg, France: climate, best times and tips month by month

One of the most picturesque places in the county is Benedictine Abbey, founded in 1920 on the grounds of Kylemore Castle. The castle was built in 1868 as a private home for wealthy London physician Mitchell Henry. This spacious house had 33 bedrooms, 4 living rooms, a ballroom and several other rooms. There was also a Gothic church and a family mausoleum. The chateau and grounds were purchased by the Benedictine nuns after they fled Ypres in Belgium during World War I. The large Victorian gardens and first floor of the estate are open for guided tours and nature walks. 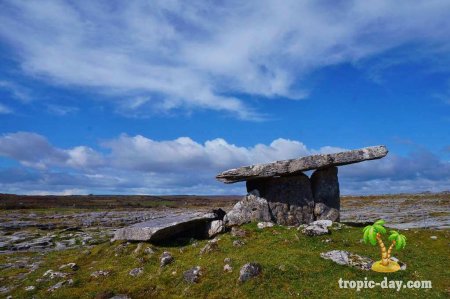 This barren but magical place, located in northwestern County Clare, has an impressive Glacier Karst landscape. Formed over thousands of years from a thick sequence of sedimentary rocks, Burren extends over quite a large area. It is hard to imagine that the area was once covered with a mixture of deciduous trees, but massive deforestation during the Neolithic led to a complete transformation. Megalithic monuments, such as the Pulnabrona dolmen and the court tombs at Teergon, testify to the early settlement of the area. There are about 70 megalithic tombs in the Burren area. 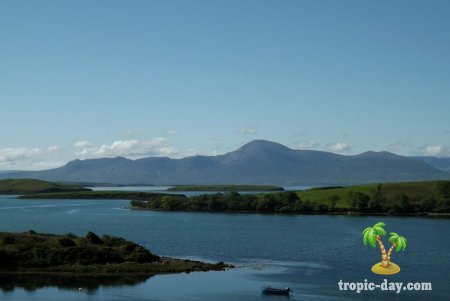 Loch Corrib or Loch Coyrib is the largest lake in Ireland, covering a vast area of 176 square kilometers. The lake has more than 1,300 islands with forested trails, secluded beaches and good swimming opportunities. The largest of the islands is Inchagoyle Island, which offers beautiful views of the Connemara Mountains, Joyce Country, and the Maumturk Range. There is also evidence of early settlement on the island. The lake appeared in the writings of Oscar Wilde’s father, William Wilde. 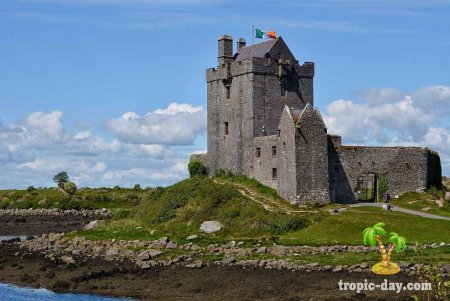 This 16th-century tower house on the southeast shore of Galway Bay near Kinvara is quite a sight. The 23-foot tower, along with its thick defensive wall, has been restored and opened to the public. It was said that the castle was built by the chiefs of the O Haidin clan. Dunguair Castle was featured in the Walt Disney movie Guns in Heather as well as in the 1979 film Capture of the North Sea.

READ
The 20 most beautiful places to visit in Spain 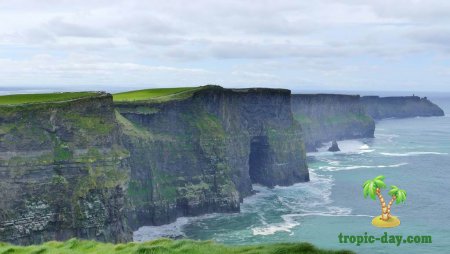 The Cliffs of Moher.

If you are in Galway for a few days, you should definitely set aside a day to visit this beautiful cliff. About an hour and a half drive from Galway, on the southwestern edge of the Burren district in County Clare, you’ll find this magnificent sight. The picturesque cliffs, about 14 km long, are one of the most visited places in Ireland. There are no surprises there, as the stunningly beautiful sight is an opportunity not to be missed. Tours from Galway to the cliffs are available throughout the day, leading visitors through charming villages on their way to the excavation site. 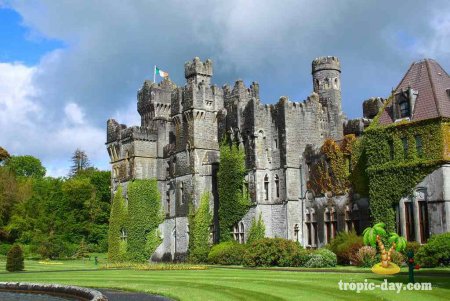 This tiny lakeside spot known as Ashford Castle Manor is off the tourist map, but it’s definitely worth a visit. The small village of Cong, located on the border with neighboring County Mayo, was once the home of Oscar Wilde’s father. Besides the magnificent Ashford Castle, which is now a five-star hotel, another key attraction here is the 12th-century Abbey. Cong was the filming location for the 1951 movie “The Quiet Man,” and the museum detailing the film’s set is an interesting visit.

2020 will be the year of Galway, the Irish city performing the role of European Capital of Culture. Throughout 2020, hundreds of culturally significant events will take place in the city and throughout the county, beginning with the inaugural ceremony scheduled for February 2020. 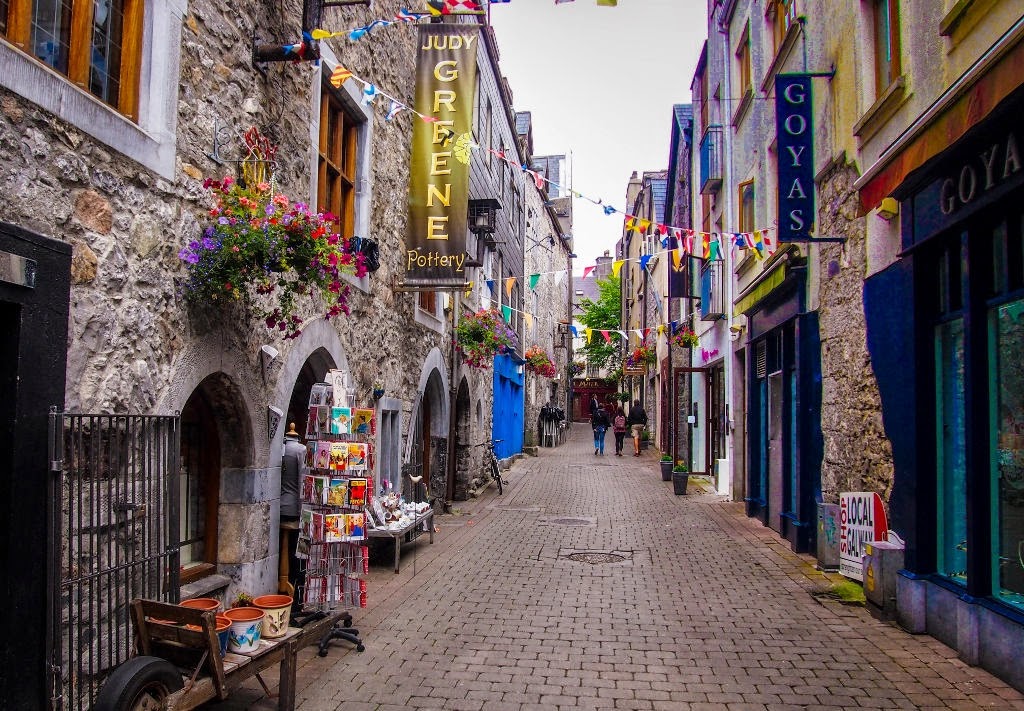 After Matera, winning the title of Capital of Culture 2020 was a landmark for the Irish city of Galway. It’s the perfect place to travel and explore the heart of Ireland, made of tradition, culture and popular music on every corner. Galway is located on the opposite side of Dublin and is home to a renowned university that attracts a large number of young people. 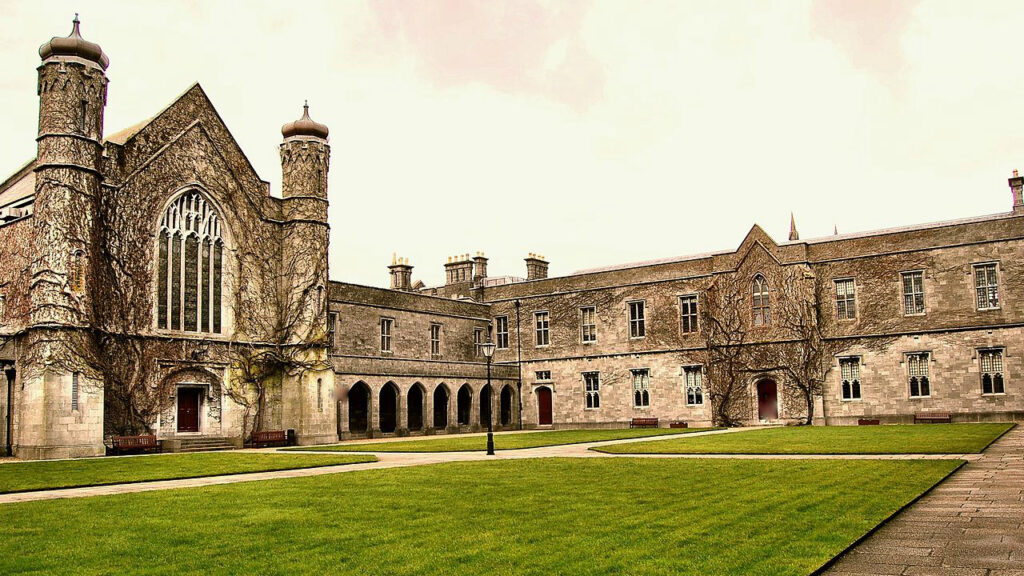 With the title of European Capital of Culture, Galway will be exciting for tourists during 2020 with a series of events that will bring the city to life. Events are planned in every corner of the country, from the islands to the most isolated villages. Food, music, dance, literature, poetry, theater, sports and various shows will be the main characters, starting with the opening ceremony scheduled for February 2020. February 1, 2020 is the first official day and will open the week-long festival, which will travel through 6 cities in the county and conclude with a spectacular opening ceremony in Galway on Saturday, February 8, 2020.

The organization of the events follows the ancient Celtic calendar, which divides the year into four seasons. They are identified as Imbolc, Beltain, Lugnasad and Samhain. Each of the four stages will open with a festival of fire, a reminder of the Irish tradition that celebrates the beginning of each new season with fire. 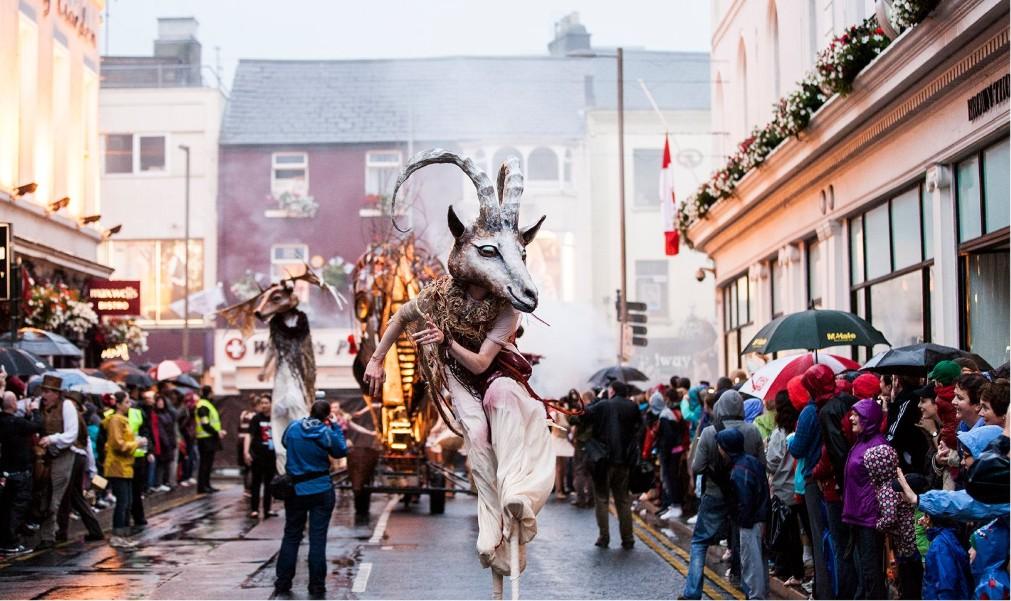 The city of Galway is home to many interesting monuments such as Lynch Castle , Spanish Arch .

Lynch Castle is a luxurious 14th-century mansion that is home to the headquarters of the Union Irish Bank. Among the places of interest are the Nora Barnacle Museum, the home of James Joyce’s wife, the City Museum, which hosts a series of permanent exhibitions on Galway history, St. Nicholas Church, one of the largest medieval churches, and the Cathedral of the Assumption of Our Lady, dating from 1965. Finally, the National Aquarium, where you can admire the local marine world. 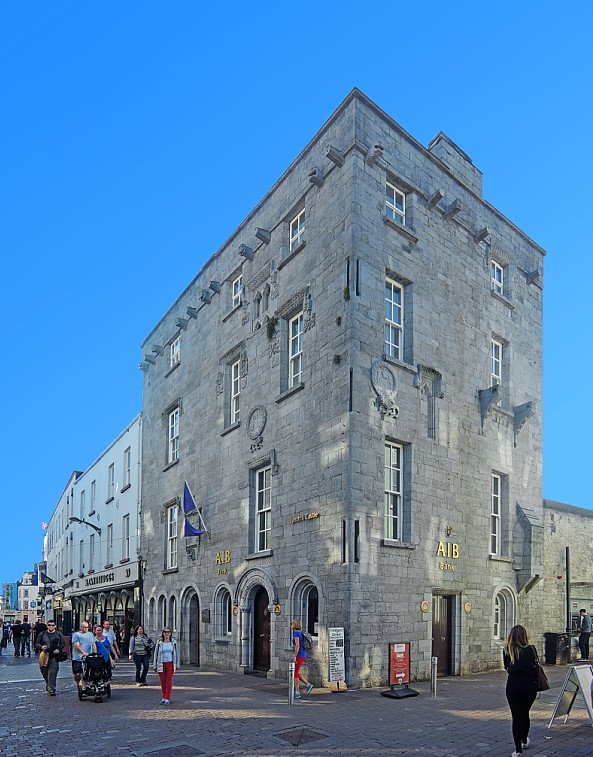 Near the center of Galway is one of Ireland’s most famous castles, Dungwire . The interior of the castle is interesting to visit and there are several halls, including one used for medieval banquets held throughout the year from April to October. 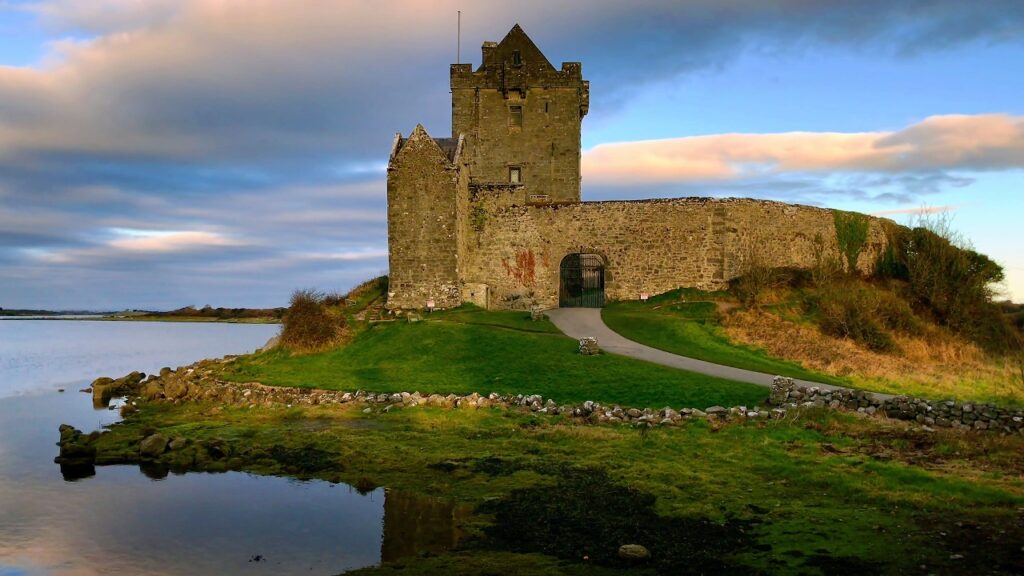 But the real beauty of Ireland, and Galway, is nature. The coastline offers incredible views of the sea. Only half an hour from Galway extends Connector, a unique place in the world, formed by winding paths, where the only companion is nature, which shows its most beautiful part.

There is no shortage of interesting events in Galway, one of the most important and anticipated moments of the year is the March 17 St. Patrick’s Day parade.