City of Galle in Sri Lanka – overview of interesting places 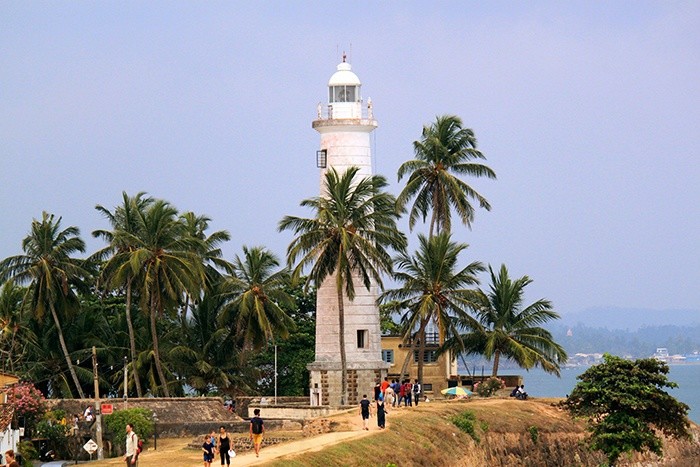 Galle, Sri Lanka is the capital of the southern province of the island, the 4th largest city in Ceylon, as well as a major port city. Galle (Galle, Gole), although located on the ocean, is not considered a beach resort: the active port precludes a clean and conveniently located beach inside Galle. But 5 km from the southern capital is a stunningly beautiful beach – Jungle beach.

Distance from the airport:

Jungle beach-a beautiful, clean beach about 5 km from the city 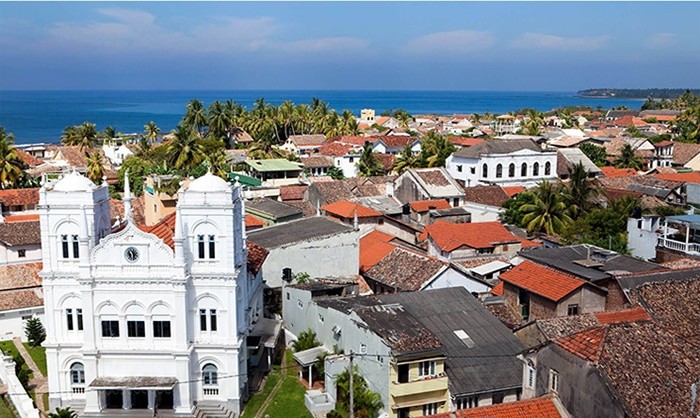 In Halle go not for a beach holiday, the city is interesting in history and architecture, here you can look at:

On the north side of Galle is Hikkaduwa resort (10 km), which is famous for its beautiful wide beach, surf schools and a wide range of entertainment for all tastes. A holiday in Galle is most often combined with a stay in Hikkaduwa so you can enjoy both the ocean and the historic part of Ceylon.

From May to October, the rainy season begins. The air temperature may drop a few degrees to 27-28C during the day and 26-27C at night.

The rains are intermittent. The weather may change dozens of times during the day – the rain replaces the sun every 1-2 hours. This peculiarity of the weather allows you to visit Halle and out of season.

Halle has a lot of history: the old buildings, the Fort, the beautiful cobblestone streets in the old part of town, the Buddhist temples. Galle is also visited during the Cricket Championship. It is home to an international cricket stadium which is used most of the time by local teams or school children. 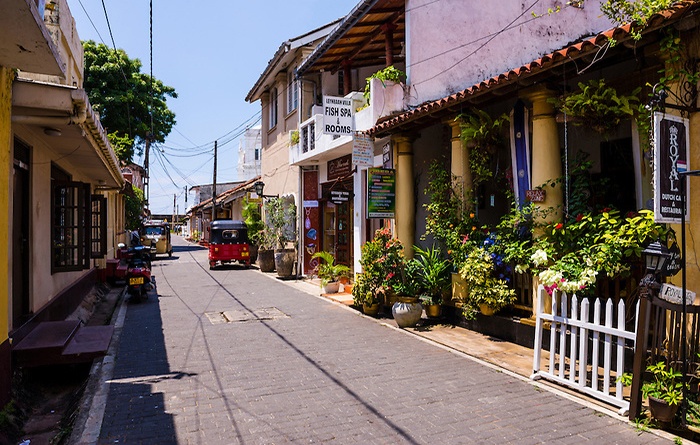 Often Galle is visited for shopping. Visiting local cafes and restaurants is also an integral part of the entertainment for many tourists. Galle Fort is home to several popular restaurants with Lankan food serving delicious rice and curry with coconut milk, roti tortillas, cotta with hot sauce, and more, as well as an Indian food restaurant, Hut, with a beautiful view of the ocean (especially impressive during sunset).

Halle Fort. History of the city.

It is better to start exploring the sights of Galle from the Sea Fort and the waterfront. It is preferable to go to explore the city early in the morning, because from 10-00 the sun begins to heat unbearably. By lunch would want to hide from the scorching heat of the best in the cool, and this desire will not disappear before sunset. Therefore, plan your tour so that during the rush hour in the shade, another option – book a tour on the tuk-tuk, this transport is very comfortable to travel even in the most intense heat. 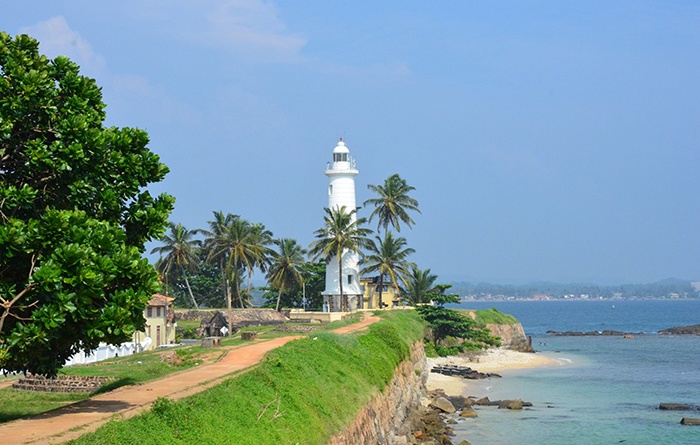 The history of the ancient Fort Halle begins in 1541, at this time there was a structure that resembles little of today’s Fort. The fortress of palm logs, stones and clay was called “Santa Cruz”, as was the name of the settlement built around the fortress. It is not known how many more years the structure would have stood if it had not been for Portugal. The Portuguese had a serious interest in the island of Ceylon since 1505, when they first arrived there to establish an export trade. As early as 1540, as a result of political events, Portugal had a strong influence on the island – interference in the internal life of Ceylon led to unfortunate results, as you can read about in detail in the wikipedia article on the Colonial era of Sri Lanka: https://goo.gl/Fckuvj

In 1588 the Fort underwent a change, and it was already a stronger and more reliable structure – a massive fortress of 3 bastions, designed to protect the city. But apart from its defensive function, the fort served as a prison for the Sinhalese (today’s Sri Lanka has a population of ¾ Sinhalese and 16% Tamils, followed by Malays, Moors, …). The Sinhalese rebels who were against the Portuguese invaders were imprisoned.

In 1602, Holland entered the battlefield, the two allies, Sri Lanka and Holland were able to recapture Trincomalee and Batticaloa by 1639. And in 1640 Galle and Negombo surrendered under the onslaught of the Allied army. At this time, Galle Fort underwent a new transformation, the structure was enlarged and solid fortifications were created, according to the construction trends of the time. Almost a quarter of a century later, from 1663 to 1688 the fort was again subjected to changes: 14 bastions were built, as well as the main part of the defense walls.

Portugal and Holland were followed by England, which entered into an alliance with the State of Candia in 1795. England was able to take over all the territory formerly owned by Holland. Thus British Ceylon emerges, which makes its own adjustments in the life of Galle Fort and the island as a whole. In 1865 some part of the fort is modified into a hotel. And in 1938 the 24-meter Lighthouse is erected in the Fort, which exists to this day. 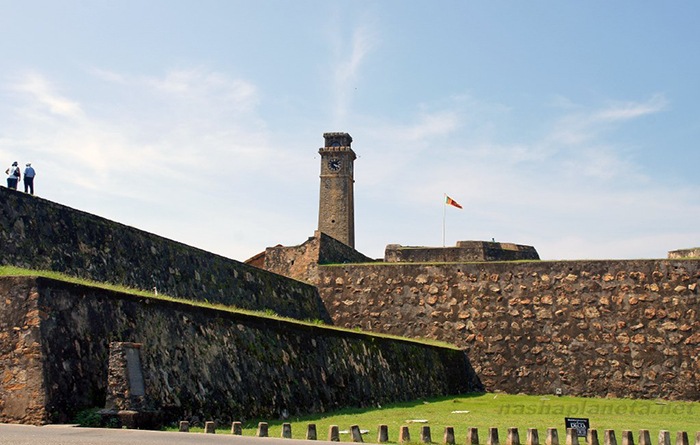 After a fire in 1934, the lighthouse was restored (literally, built anew), its height remains unchanged – 26.5 meters, and 47 meters in diameter.

After that nature has made its adjustments – a devastating tsunami wave in 2004 struck the island of Sri Lanka. In Halle, more than 2 thousand people were swept away by the wave, the main part of the city was destroyed, along with the city suffered and Galle Fort. Work on the restoration of the structure is still underway.

Thus, Galle Fort – is a centuries-old story: the independent island of Ceylon, then the Portuguese Ceylon, after – the Dutch conquest of the Portuguese territory, followed by the British colony, World War II, the tsunami in 2004. The fort has withstood the ravages of centuries, and today, the fort is also ready for defense.

On the territory of the Fort there is a Catholic church built by the Dutch back in 1862. The kirk, one of the main attractions of Galle, is a monument to the colonial times of the island. 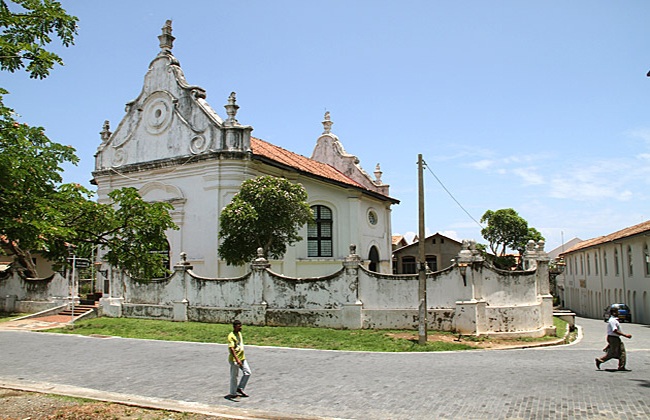 European architecture is unusually harmonious among the exotic palm trees. The place is also a must visit!

Another attraction for tourists is shopping. The old town is full of souvenir shops, antique stores, jewelry stores, and clothing stores. 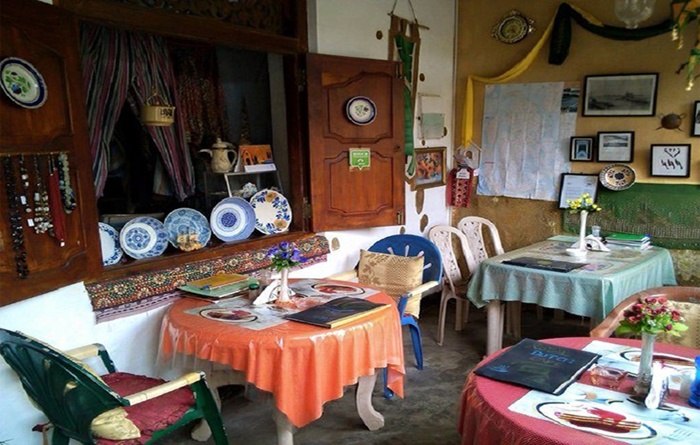 Galle has a shopping street with 2-3 large malls (large by Sri Lankan standards), as well as small shops where you can buy summer clothes and shoes in assortment. Most of the stores are designed for Lankans, so we can not talk about quality or fashionable styles. However, there are exceptions – there are small stores with branded clothes (mostly runoff) or stores with traditional Lankan clothes – sari, made of natural materials: silk, chiffon or cambric. In such places you can order sewing saris to your measurements or just buy quality fabric for yourself or as a gift. The shopping street is next to the fruit and fish market.

Antique and jewelry stores are found all over the city, especially in the old part of Galle – near the Fort. The selection here is so diverse and interesting that a visit to such places is a must for everyone. You don’t have to buy anything, but it’s a good way to learn about the island’s history through antiques.

As mentioned above, there is no convenient and clean beach for swimming in Halle. But the town of Unawatuna is 5 kms away from Galle and has a beach that is popular with tourists, Jungle beach. The road to the beach passes through the jungle, so not only the place for bathing, but also its location is interesting. The beach itself is not wide, but cozy and clean. 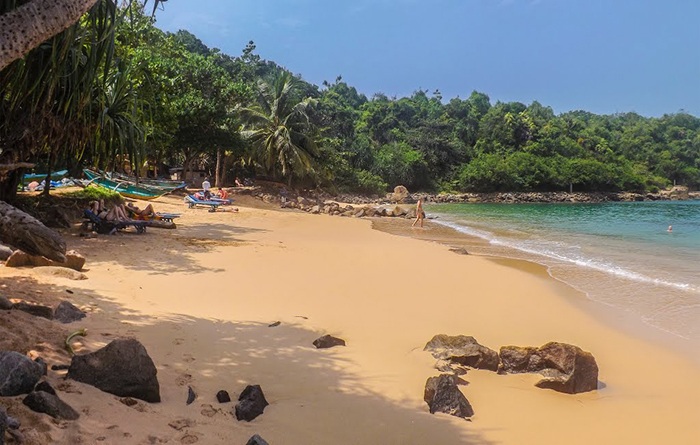 Until recently, the beach did not have sun beds and changing rooms, also there were no stores and cafes. Which fully corresponded to its name – the place resembled a wild beach, not a tourist recreation area. But gradually the popularity of Jungle beach is gaining momentum, on the shore appeared the first sun beds and a bar with soft drinks and juices.

Entrance to the water is gradual, the sand is fine, there are no waves even out of season. The absence of waves makes the beach convenient for swimming with children. In some places there are stones, so it’s better to go into the ocean, where there are already bathers, or go straight from the stairs.

Of the minuses – on weekends, a lot of people gather here: the locals come with their families for a picnic, quite a few tourists. On the beach it gets very noisy. But if you come on a weekday, the beach will pleasantly surprise – quiet, peaceful, with beautiful wildlife: you can see monkeys, varans, small turtles, and in the jungle – parrots and beautiful colorful birds.

Typically, for a beach holiday go to Hikkaduwa – a neighboring town, located 20 km from Galle.

Fruit market and fish market. Where to buy tea

The fruit market is on the main street of the town, it is difficult not to notice it, because it is the only road in the direction of the town: passing the bus station, passing the traffic circle, turn left – opposite the waterfront (where the fishing boats are moored), there are two markets – first the fruit rows and a couple of meters away the fish market. 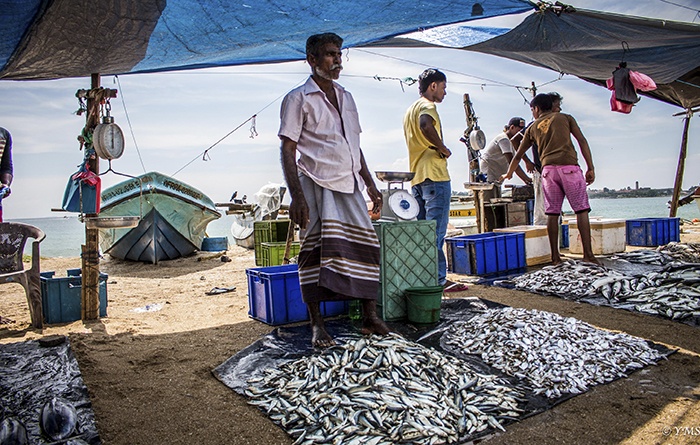 Fruits and vegetables are sold until late evening, some tents close after 7 pm. Regardless of the season you can buy fruits such as: bananas (about 5 different varieties), pineapples, coconut, drinking coconut, wood apple, papaya, avocado, carambola, jackfruit, mango. Rambutans, mangosteen, durian, lychee, sausage, and dragonfruit are in season. During the harvest time the prices of fruits and vegetables are not cheap, so do not be afraid to haggle, and if in doubt, it is better to check with another salesperson the price of similar goods.

Here, in the market, they sell Ceylon tea and coffee, which you can bring as a gift. The prices for hot drinks are too high, if you go to an ordinary Sri Lankan supermarket or a small store, you can buy the same tea for 2 or 3 times cheaper.

The fish market is open from early morning till lunchtime: to buy fresh fish and see the variety of sea creatures, come by 6 am. In the afternoon there will be no one here.

Excursions and Tours in Galle

In almost any major city in Sri Lanka, Galle is no exception, you can take a city tour (with English-speaking and even Russian-speaking guide) or order a tour of the island. This can be 1, 3, 5-day tour, places to visit you can choose for yourself. You will definitely be offered:

If you have ever visited the city of Galle or the island of Sri Lanka, please write your review in the comments. Your impression of the trip, whether positive or negative, is sure to be helpful to future travelers.