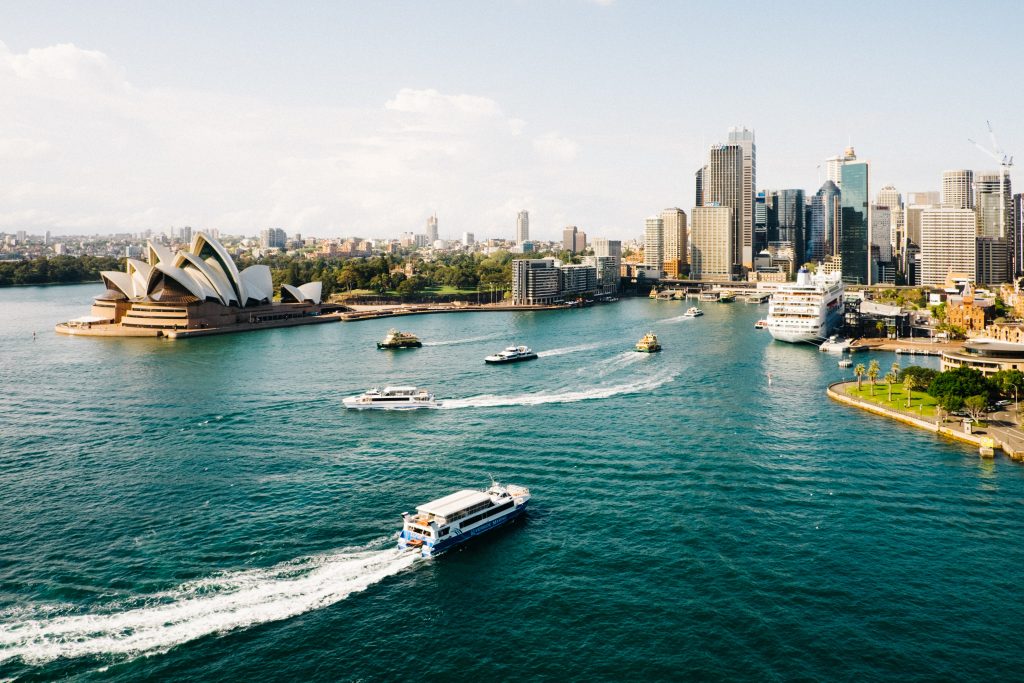 Australia is a distant and unusual country with exotic nature that attracts most tourists who decide to travel to the southern mainland. We have compiled a list of the most interesting and famous natural attractions that are worth seeing with your own eyes. 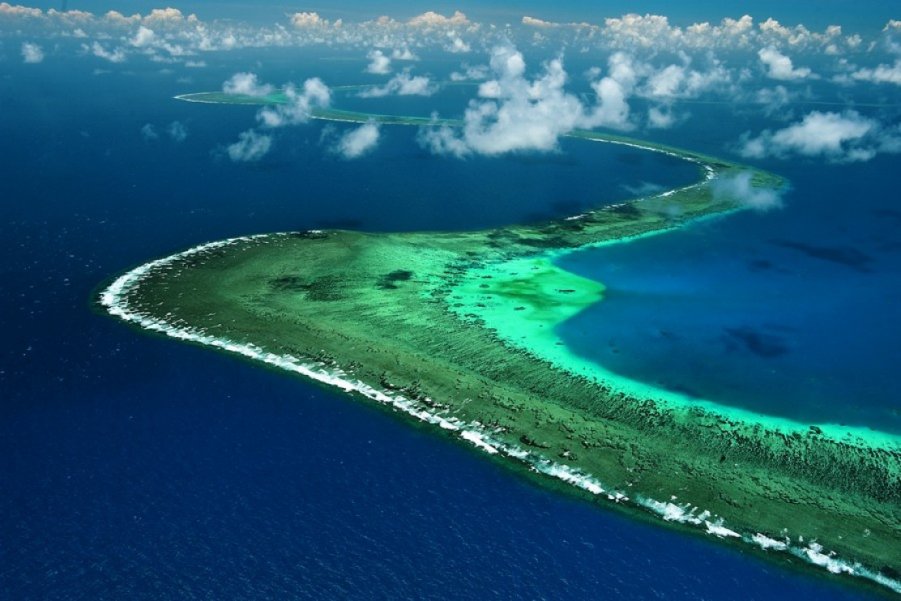 The Great Barrier Reef is the world’s largest coral reef and Australia’s most famous natural attraction. It stretches over 2,500 kilometers along the northeastern shore of the mainland. In fact, it’s not a single reef, but a cluster of almost three thousand coral reefs. The Great Barrier Reef is larger than the whole of Great Britain. It is so large that it is clearly visible from space.

The Great Barrier Reef is a National Marine Park, a UNESCO World Heritage Site. You can get to the reef on a pleasure boat or a boat that runs from the Australian coast.

The Great Barrier Reef is made up of living organisms – coral polyps. It also supports many other creatures. The reef is a very fragile and defenseless ecosystem and it is important to protect it from negative human impacts.

The great barrier reef attracts many tourists, fishermen and divers, so Australia requires special rules when visiting the reef area. For example, corals can not be touched by hand, you can not do scuba diving, mining, or oil and gas extraction.

Only some areas of the Great Barrier Reef are open to tourism. Diving is available around the islands of Lizard, Heron and Magnetic. Beach recreation, snorkeling and excursions are available on Fraser, Keppel, Dunk and Hamilton Islands.

Catamaran tours are available online in advance or at the waterfront in a seaside Australian town, such as Cairns Cove. You can also rent snorkeling equipment there. If you don’t like snorkelling, take a helicopter tour and see the reef from up high. 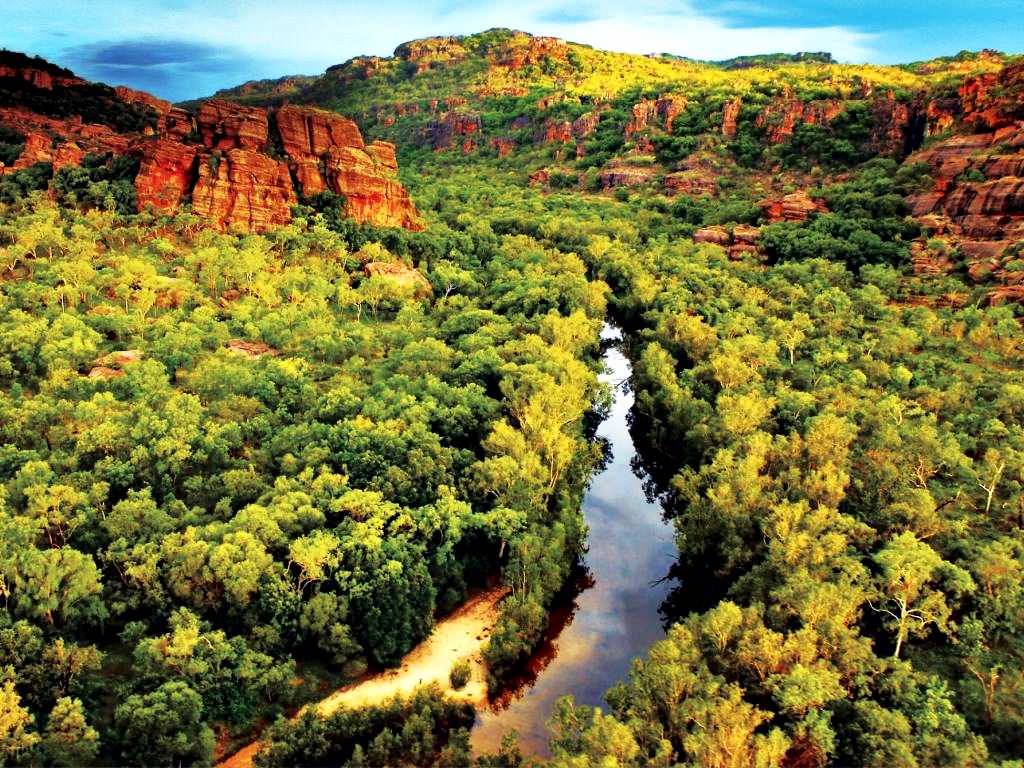 Kakadu National Park is a vast wilderness area on Australia’s north coast just east of the city of Darwin. This reserve combines both beautiful Australian scenery, diverse wildlife, a rich underwater kingdom, and Aboriginal cultural treasures. It is the largest national park in Australia.

Kakadu Park is still home to Australian Aboriginal people, a small tribe of 500 inhabitants. Tourists are not allowed on their land, but at the park’s Aboriginal Cultural Centre, you can meet and interact with them on certain days and hours.

The main attraction of the park is the nature. This place is unique to Australia – it has a very developed water network of many rivers, streams, waterfalls, and lakes. During the rainy season, you can admire the cascade of Maguk, Jim Jim and Gem Gemini Falls. The waters of the park are home to enormous crested crocodiles, the largest reptile in the world. The length of this animal reaches 6 meters.

The park is surrounded on all sides by high cliffs. Inside there is lush tropical vegetation, among which there are glades with dozens of surprisingly tall termites. Kanadu Park is home to 1,000 species of insects, hundreds of bird species, and 60 species of mammals.

Kakadu Park is also famous for rock art in ancient caves. They were inhabited tens of thousands of years ago by the ancestors of today’s Australian aborigines, who created a series of so-called “X-ray” drawings. On them the ancient artists depicted not only the appearance of animals and people, but also their internal structure.

Tours of the park are conducted by jeep. Some roads are accessible only in the dry season, as they are dangerous during the rains. 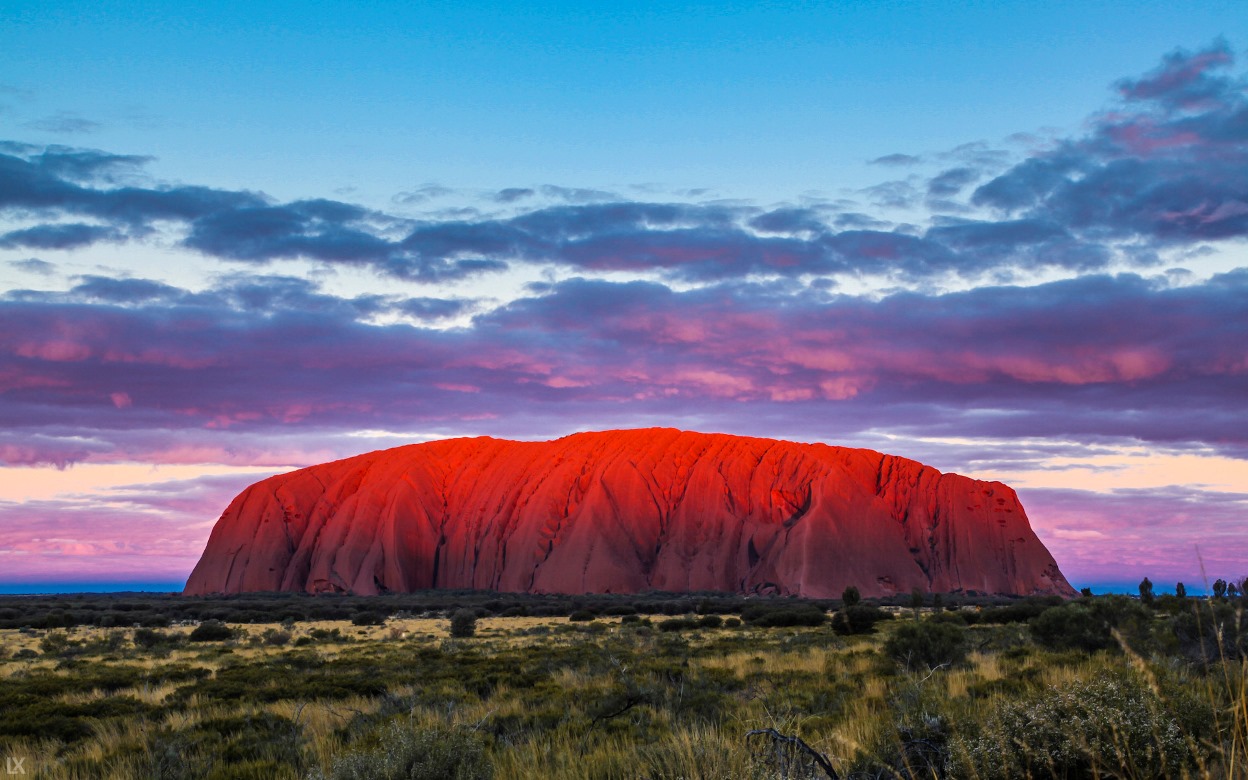 Uluru is a large bright red oval rock in the middle of the desert in the heart of Australia. The rock is also known as Ayers Rock or Ayers Rock. It is one of Australia’s most recognizable landmarks and has been called a symbol of the country along with the Sydney Opera House and the kangaroo.

Uluru rises 348 meters above sea level. Its smooth slopes are quite gentle, and from above the mountain looks like a lying elephant. Up close you can see that the rock is covered with irregularities and cracks, but from a distance it seems monolithic.

READ
The 10 best beaches in the Seychelles

Uluru is formed of red sandstone with an admixture of iron, which gives the rock its bright color. Interestingly, the color varies depending on the time of day and weather. At dawn the mountain is dark purple, in sunny weather in the morning it seems purple and in the afternoon gold.

The Aborigines of Australia worshipped Mount Uluru. The locals have believed since ancient times that the rock gives strength to man. In ancient times, the Aborigines lived at the foot of Uluru, and samples of rock art have remained on its slopes.

The Aborigines believe that it is forbidden to take souvenirs from Uluru – even a small pebble can cause trouble. Many tourists disregard the advice of native Australians and take pieces of rock as a memento. And then they return them – the tourist center of Uluru regularly receives packages with stones, which, apparently, bring bad luck after all.

Uluru Rock is located 450 kilometers from the city of Alice Springs. The nearest settlement, Yulara, is 18 kilometers away. There are no tourist facilities at the rock. Tourists have to get to the mountain through the desert by bus in the terrible heat and walk under the scorching sun.

Many tourists are not limited to seeing Uluru from the side and climb the mountain. The rock is not high and steep, but it is not safe to climb. Its slopes are too smooth and slippery, and the weather in the middle of the Australian desert is too hot. 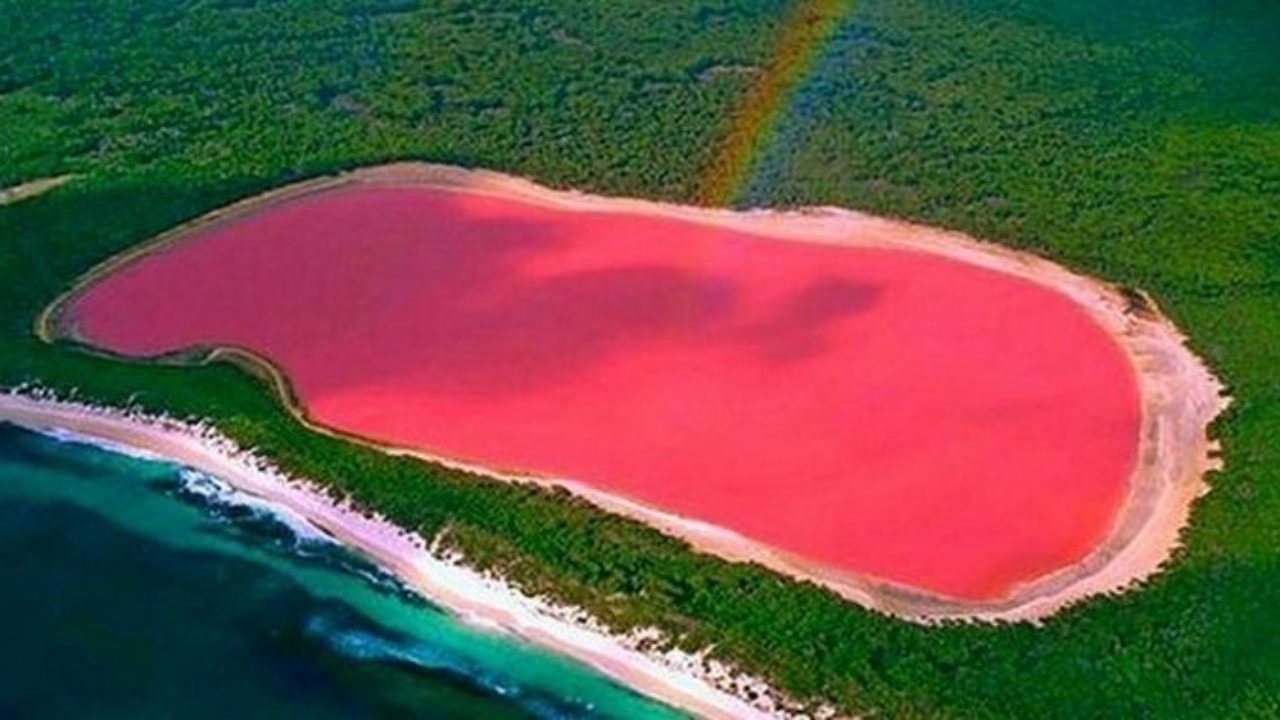 Hillier is an unusual pink lake on Middle Island off the southwest coast of Australia. The water’s rich, matte pink color is not a trick of seeing, it’s real. If you pour it into a separate container, it remains pink. Surrounded by a white strip of sand and a dense rainforest of eucalyptus trees, Lake Hillier looks really strange.

READ
Travelling in the UK: The City of Derby

The lake looks especially spectacular from a bird’s-eye view. From above, you can compare the bright pink water to the water of the ocean: they are separated by a thin strip of forest, as the lake is close to the shore. The hue of the water changes slightly depending on the light: it can be bright, like chewing gum, or dark, almost burgundy in color.

Algae and microorganisms give the water its pink color. For a long time, this theory was considered false, as experiments of the 50s did not confirm it. But in 2016, scientists conducted a series of tests and proved this fact, naming several species of organisms that are responsible for this phenomenon.

Lake Hillier is extremely salty, with salt levels several times higher than in the ocean. Swimmers are simply pushed to the surface because of this concentration. Salt crusts form along the lake’s shores.

The lake is far from civilization, it is not easy to get to it. Tourist infrastructure in this area is not developed, tours by water transport are rarely arranged. The most convenient option is air transport, but for most tourists it is expensive.

The Rocks of the Twelve Apostles 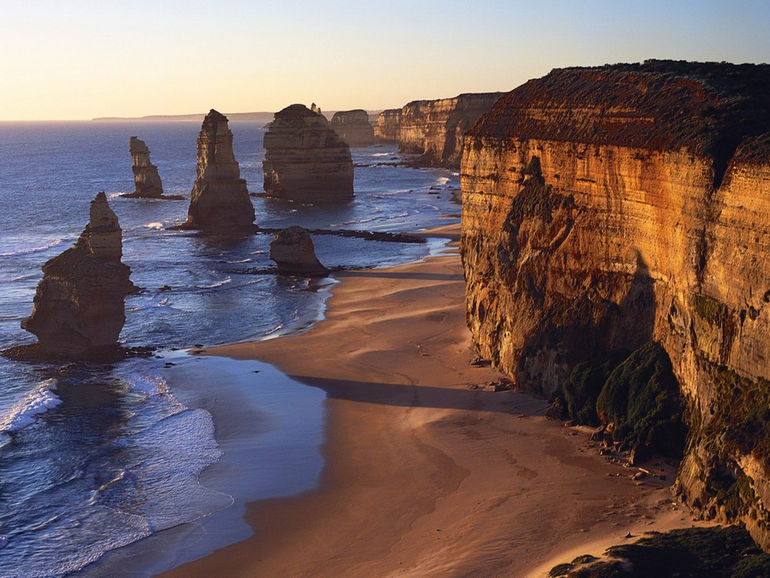 On the southern coast of Australia, along the Great Ocean Road, there is a group of several picturesque limestone pillar-like cliffs. They are up to 45 metres high, and against the backdrop of the ocean they look very imposing. These rocks are called the Twelve Apostles, although there are only eight of them. Despite the discrepancy in number, this romantic name quickly caught on, replacing the previous “Pig and Pigs.

The Rocks of the Twelve Apostles are located in Port Campbell National Park. It is relatively close to Melbourne – about 250 kilometers. There are few other important landmarks in the park, as the reserve was created specifically to protect the limestone cliffs. There is another rock not far away called London Arch. It used to connect to the shore and was known as London Bridge, but in 1990 a narrow “span” of the bridge collapsed, leaving a freestanding rock.

Millions of years ago the Twelve Apostles were part of the Australian continent. The soft limestone is easily eroded by erosion. The waves of the ocean undermined the rocky shore and formed freestanding limestone pillars. Erosion still continues to this day: every year it destroys 2 cm of limestone. The rock group used to consist of nine rocks, but in 2005 one of them collapsed, leaving behind only a pile of rocks in the ocean.

Tours to the Twelve Apostles usually start from the towns of Port Campbell or Princeton, which are not far from the reserve. The park operates a visitor center and offers helicopter and water tours. 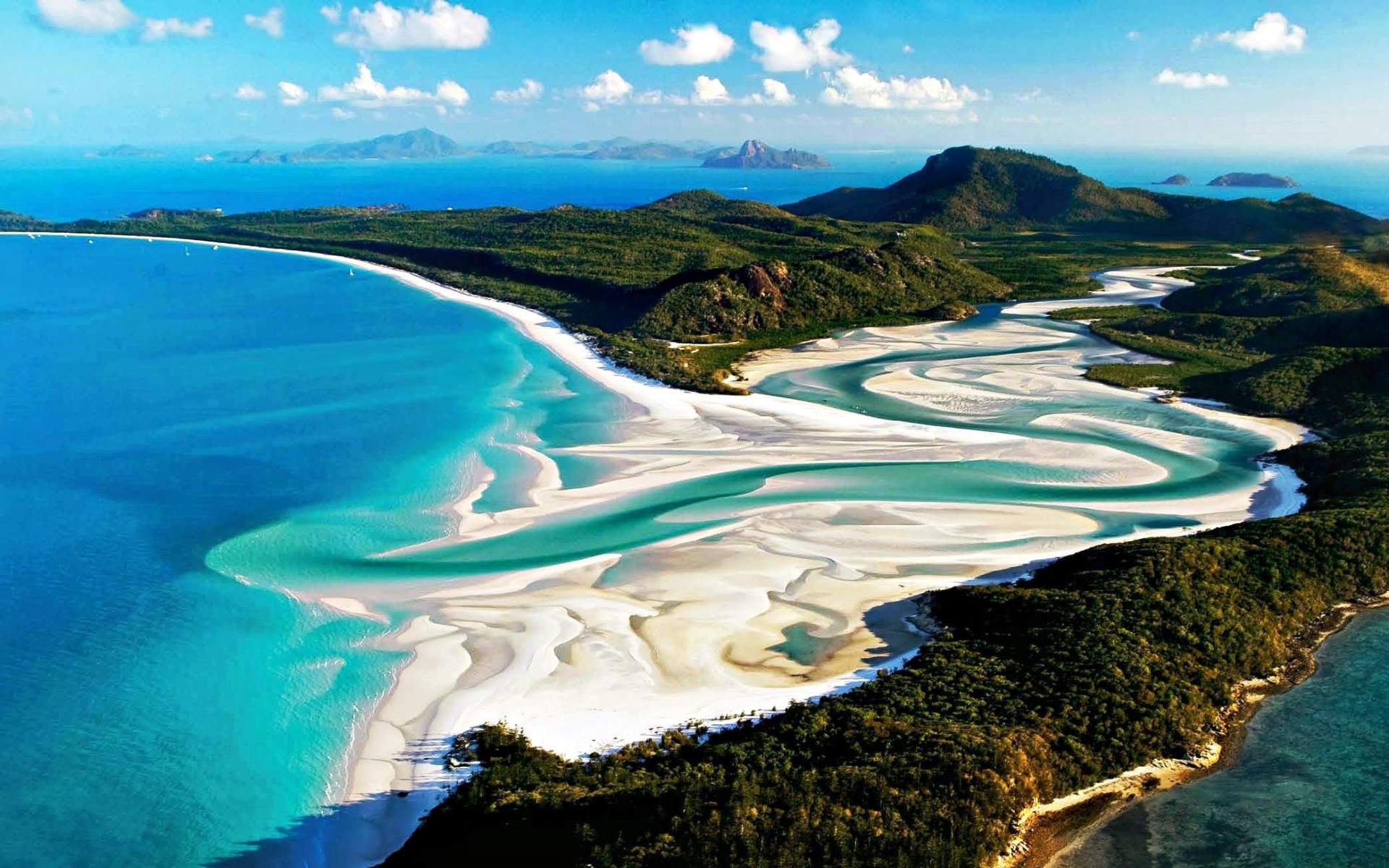 One of the most beautiful and inaccessible beaches in the world is in Australia, on Holy Trinity Island in Queensland. It is known as White Paradise and it fully lives up to its name. It is a seven kilometer long pure beach with white sand and azure water, framed by tropical greenery.

The white sand on White Paradise Beach is not just a beautiful figure of speech, it really is pure white. Because of its purity, NASA uses this sand in making lenses for the telescope. Also, the grains of sand on this beach are very fine, so the sand feels soft and gentle.

In the shallows at the northern end of the beach, the white sand forms spectacular patterns as it mixes with the ocean water. White Paradise looks especially beautiful from above at low tide. It is hard to believe that this is a natural creation and not an artist’s masterpiece.

White Paradise is equipped for recreation. There is a water sports center, picnic areas, and ample areas for swimming. Helicopter tours and seaplane flights are available for those interested. 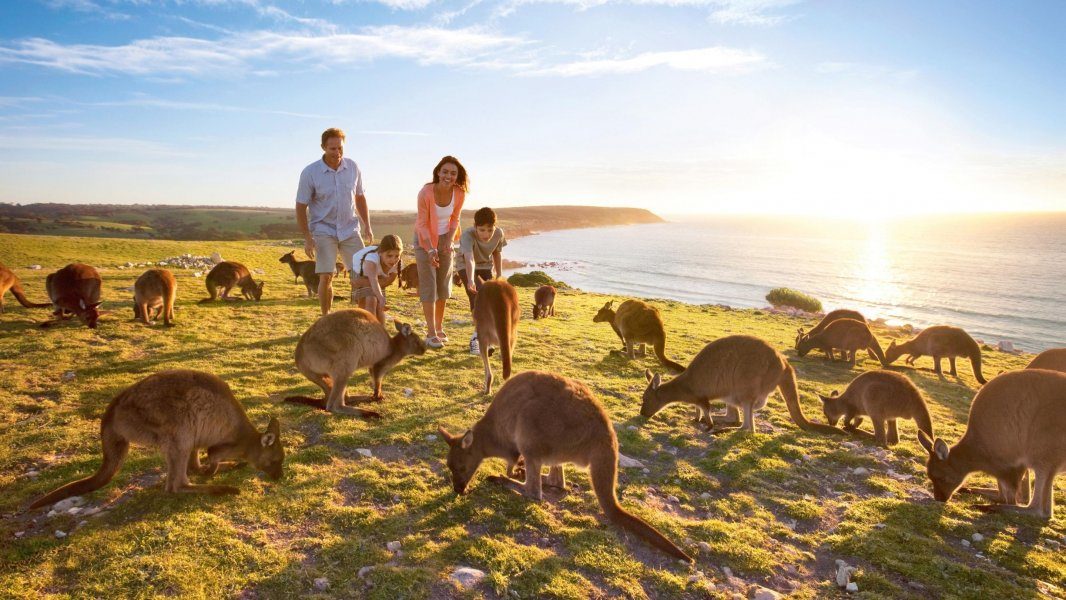 Kangaroo Island is one of Australia’s largest and most famous islands, most of whose territory is occupied by nature reserves. The island is famous for its rich and rare fauna: there is a large population of kangaroos, unusual marsupial badgers – bandicoots, wallabies, bats, possums, echidnas, monitor lizards and koalas. There are no introduced animals on the island, such as foxes or rabbits, as on the mainland. Until the mid-19th century, there were also ostriches emu.

The island is divided into several protected areas and reserves. The most famous is Flinders Chase National Park. The main attractions of this park are the Admiral’s Arch cave, spectacular orange boulders on the coast, the so-called Remarkable Rocks and a colony of seals on the ocean.

But the main attraction of the reserve and the entire island is the kangaroos. These animals are everywhere, they are not afraid of people and come pretty close. Of course, you can not call them tame – kangaroos will not let themselves touch or stroke.

You can get to the island by ferry or plane from Adelaide. There is civilization on the island and about four thousand people live here. The largest settlement on Kangaroo is the town of Kingsot. There are hotels, restaurants, stores.

Not all of Australia’s most beautiful places are far from the cities. If you don’t have the time or opportunity to travel around the country, visit attractions near Sydney or Melbourne – such as Mount Ennan Botanical Gardens or Jenolan Caves.