Finland – the most detailed information about the country with photos. Attractions, cities of Finland, climate, geography, population and culture.

Finland is a state in northern Europe in the eastern part of the Scandinavian Peninsula. It borders with Sweden to the west, Norway to the north and Russia to the east. Finland is a modern state with a high standard of living, comfortable small towns and villages, which still has large unspoiled natural landscapes. It is a parliamentary republic in which Finnish and Swedish are recognized as official languages.

Finland – a country of white nights and northern lights, vast forests and hundreds of thousands of blue lakes, many picturesque islands and vast expanses of snow in Lapland, known to many as the home of Santa. It lies far from the popular tourist routes and is not spoiled by the attention of tourists. But in this lies its charm. Finland is very real, from nature to the people on the streets. 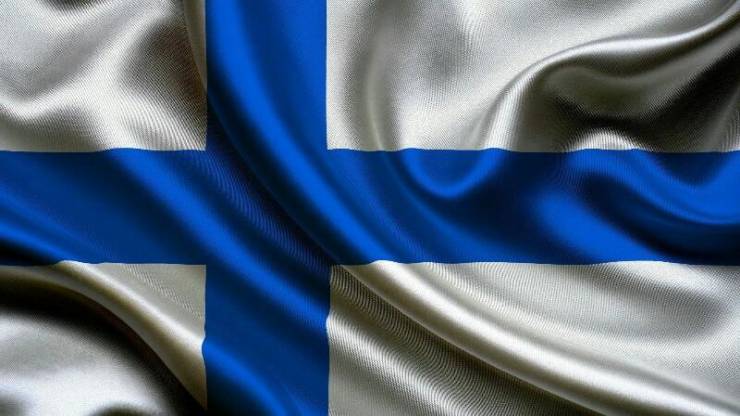 Finland is located in Northern Europe in eastern Scandinavia. The southern part of the country is washed by the waters of the Gulf of Finland, and the western part by the waters of the Gulf of Bothnia, which are part of the Baltic Sea. About 1/4 of the territory lies beyond the Arctic Circle. There are more than 180,000 lakes and over 80,000 islands in the expanses of Finland. 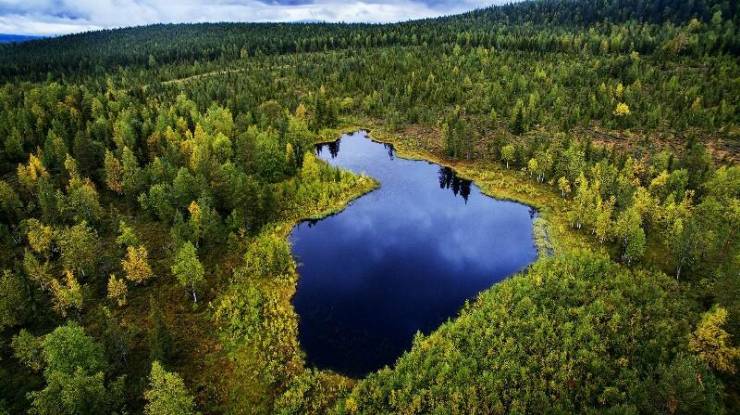 Geographically the country can be divided into three regions:

The climate is temperate over most of Finland’s territory, transitional from maritime in the south to continental in the north. Winters are quite cold and snowy. Summers are cool. 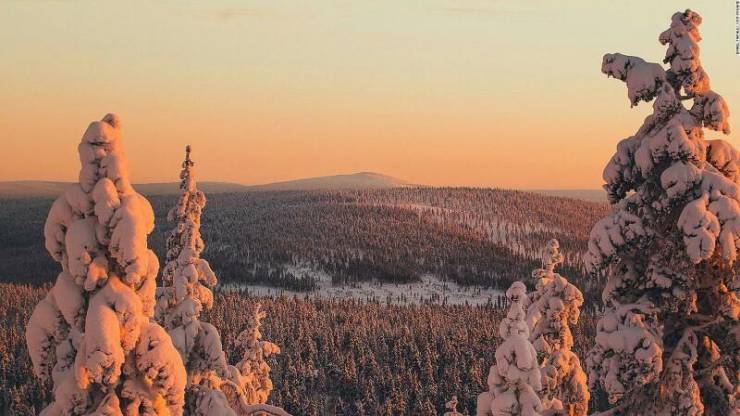 The best times to visit Finland are summer, early autumn and winter. In summer and early autumn you can enjoy the beauty and colours of Finnish nature, long walks and white nights. In winter you have the chance to see the Northern Lights. 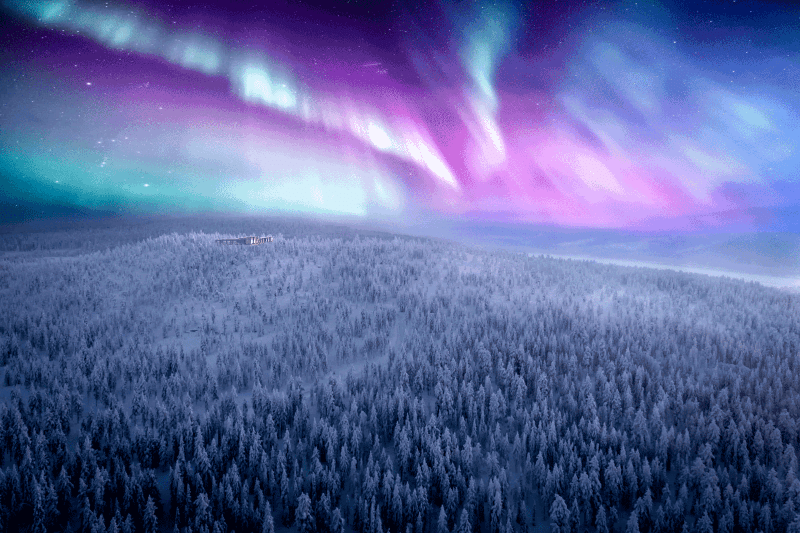 The territory of modern Finland was inhabited in the 8th-9th millennium BC. The oldest settlements were found between the Gulf of Bothnia and the Gulf of Finland. The first mention of Finland dates back to the 1st century AD. By 1000 its territory was inhabited by Suomi, Tavasti and Karelians. They differed culturally and often feuded. Modern Finns emerged from a mixture of Germanic, Baltic and Siberian peoples. The Finnish language is based on the Ugro-Finnic dialect.

READ
Seven Wonders of the World: The Hanging Gardens of Semiramis

In the 8th century the Vikings came to the Finnish coast and founded trading settlements there. In the mid 12th century, during the reign of King Eric IX of Sweden, the Finnish tribes were subjugated and their Christianization began. From this time begins more than six centuries of Swedish domination. In the 13th century western and southern Finland became culturally and politically closer to Sweden. At the end of the 13th century the Swedes undertook another campaign to the Finnish lands, which resulted in the foundation of Vyborg. In 1362 Finland became a Swedish province. 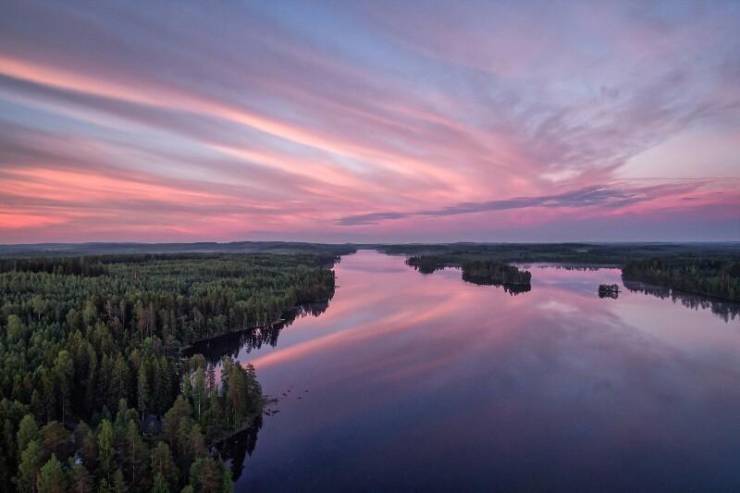 Between 1700 and 1809, as a result of three Russian-Swedish armies, Finland became part of the Russian Empire as a Grand Duchy, with Helsinki as its capital. In 1917, Finland declared its independence, which was confirmed in several wars with the Soviet Union. Until the beginning of World War II, the country has adhered to neutrality. In 1940, it began to cooperate with Germany to return its historical lands and expand its territories. In 1944, Finland withdrew from the war and broke off relations with the Nazis. In 1995 the state became part of the European Union. 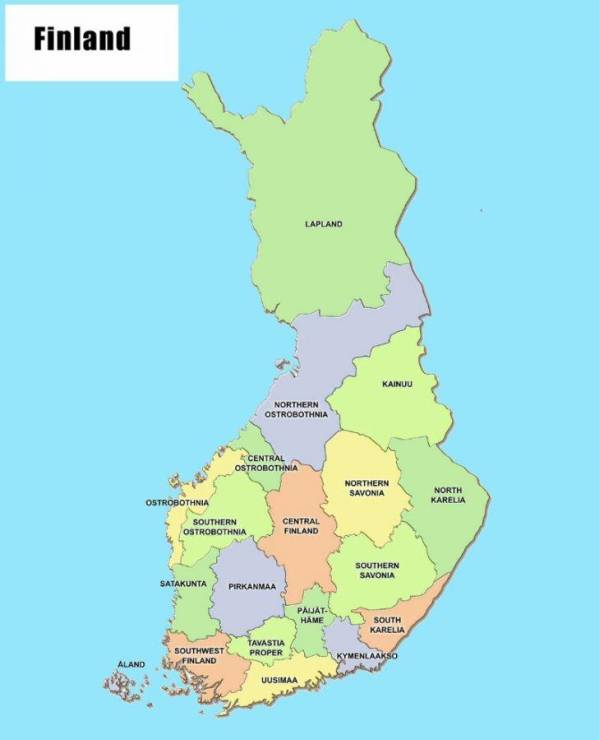 Geographically, the territory of Finland can be divided into the following regions:

Most of Finland’s population are ethnic Finns. Quite a large Swedish diaspora. Official languages are Finnish (which is spoken by 90% of the population), Swedish and some Sámi. Finnish is not related to the other Scandinavian languages (Danish, Swedish, Norwegian, Icelandic and Faroese), Russian or English. In fact, it doesn’t even belong to the Indo-European language group, but is part of the Uralic language group, which also includes Hungarian and Estonian. Therefore, its understanding and reading is quite difficult. But it won’t be much of a problem, since more than 70% of the population speaks English.

Finns are quite open and sincere, civilized and sociable. They are genuine and think what they say. At the same time Finns are modest, quiet and responsible. They honor their traditions, love the outdoors and the sauna.

The country’s largest international airport is located near Helsinki. Other major air ports are Tampere and Turku. Rail and bus connections are quite strong with St. Petersburg, but it’s not the fastest and cheapest way to get to Finland. The best is the ferry. Ferries connect the country with St. Petersburg, Stockholm, Tallinn and Riga. 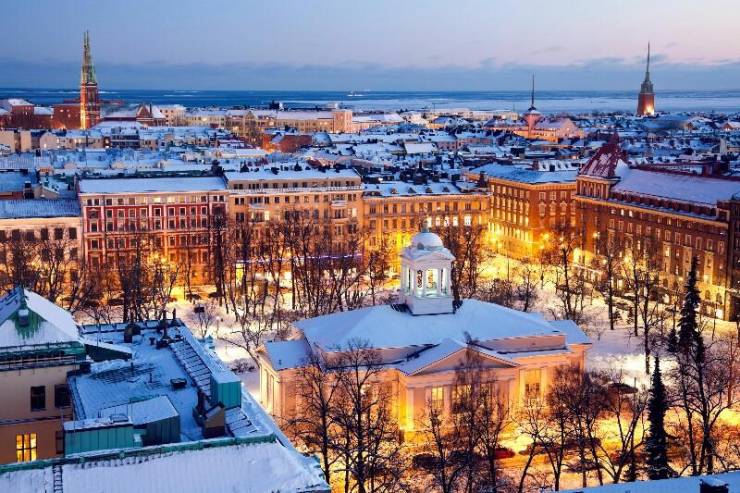 Cities and popular destinations in Finland 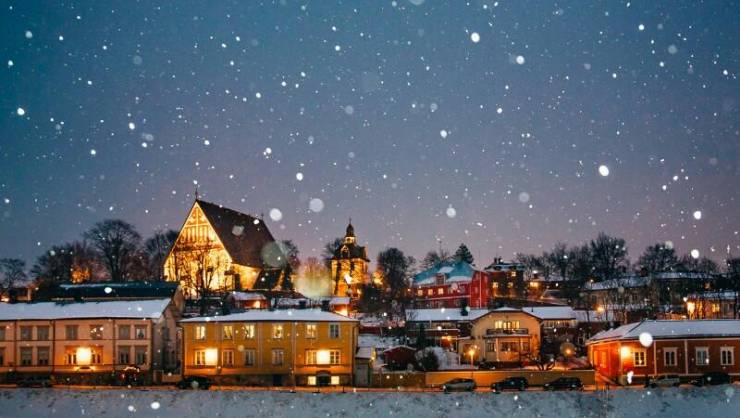 – Finland’s capital and its only “real” city that still retains its provincial character. Helsinki is called the “daughter of the Baltic States,” and the city itself is modeled on St. Petersburg. – A small town with a beautiful medieval castle. 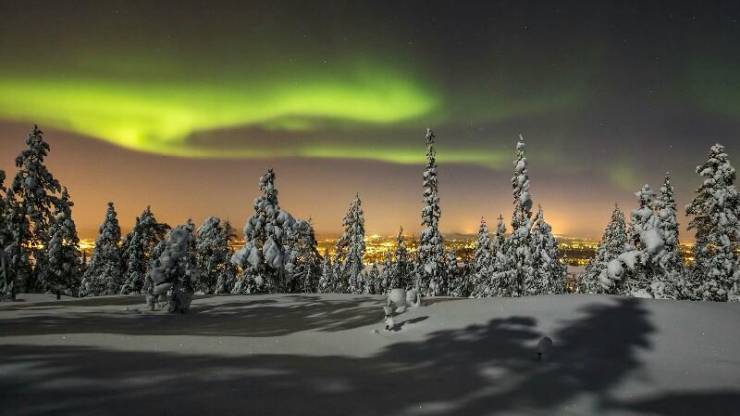 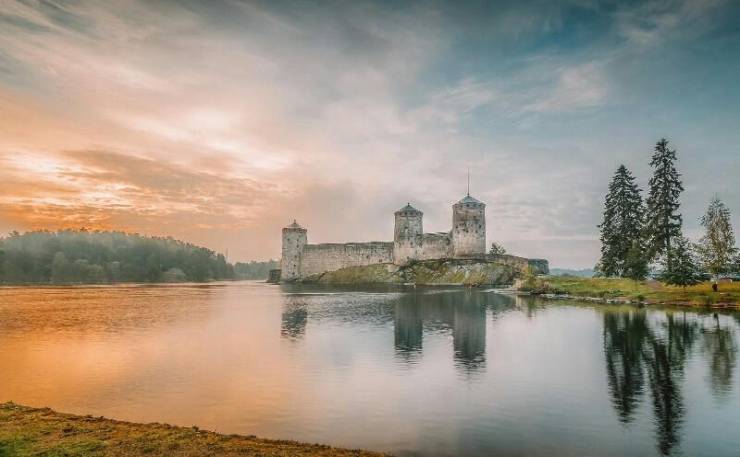 Olafsborg (Olavinlinna) is a Swedish fortress of the 15th century with three mighty towers. It is considered the northernmost medieval stone citadel. 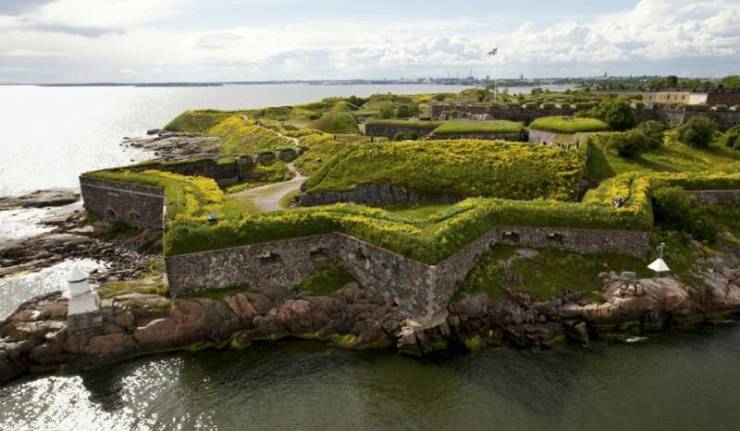 Sveaborg (Suomenlinna) is one of the world’s largest naval fortresses built by the Swedes in the 18th century. Located near Helsinki and is a UNESCO World Heritage Site. 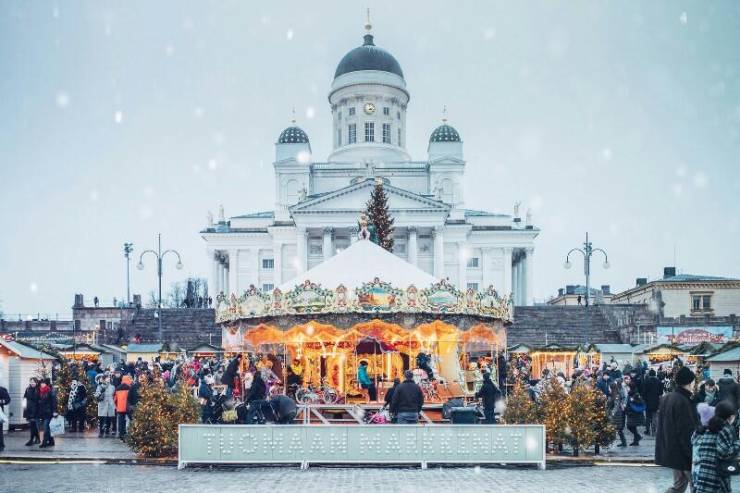 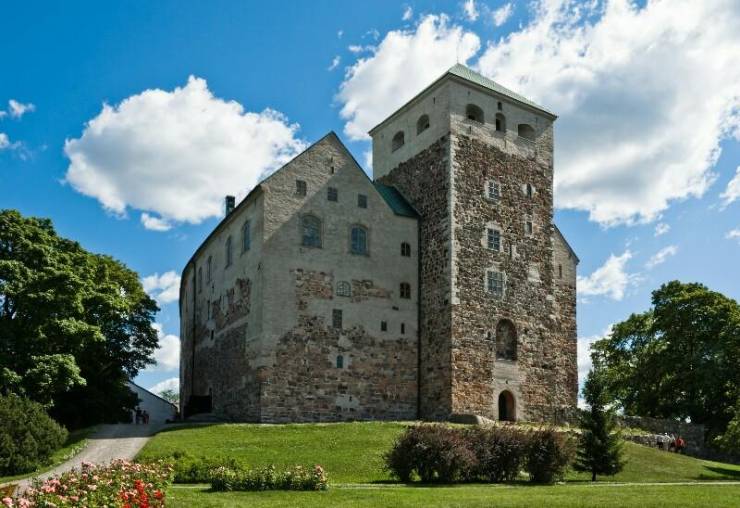 The Castle in Turku is a magnificent medieval building from the end of the 13th century, originally built as a military fortress. Today it houses one of Finland’s most visited museums. 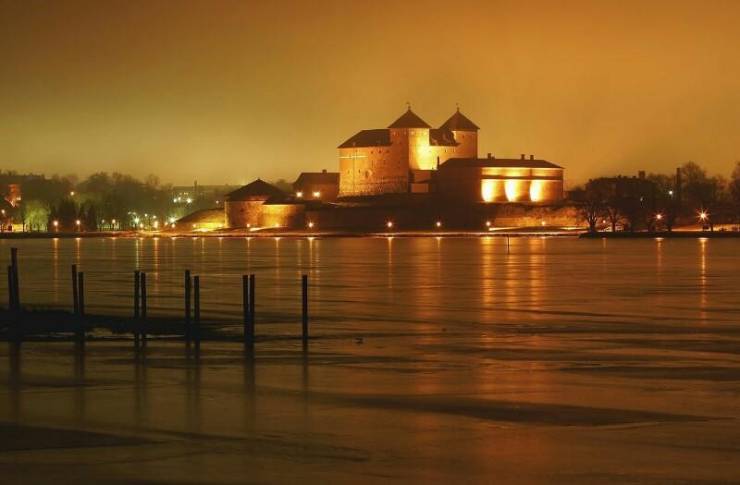 Hämeenlinna is a beautiful medieval brick castle from the 13th century located near the Aulanko Nature Park.

Accommodation in Finland is expensive. Interestingly, during the summer, the cost of hotels in the cities can be a little lower, as most Finns go out into nature. One way to save money on accommodation is to settle in youth hostels (retkeilymaja). Also a great option is to book a cottage with a sauna (Mökki). 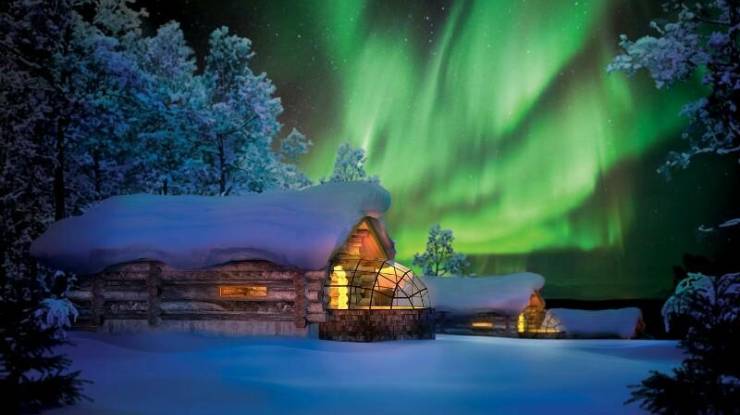 Finnish cuisine is heavily influenced by its neighbors (Sweden, Russia). The main foods are potatoes and bread with a variety of fish and meat dishes. Dairy products also play large role in Finnish diet.

Prices in cafes and restaurants in Finland are quite high. To save on food you can take advantage of complex offers, buy fast food or food in supermarkets. 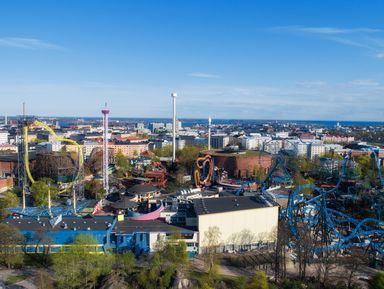 Have fun at the zoo, museum, aquarium or amusement park 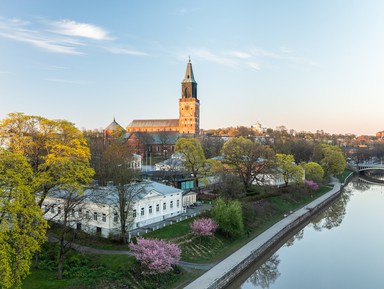 Turku – getting to know Turku for the first time