This article is written for introductory purposes. Consult your doctor for advice. 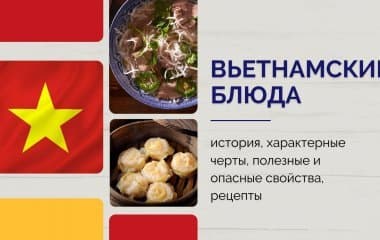 Vietnamese dishes are balanced in the ratio of spiciness and spice, sourness and sweetness, vegetables and meat. Vietnamese cooking has absorbed the traditions of China, France, and Thailand, while creating a unique and distinctive cuisine. 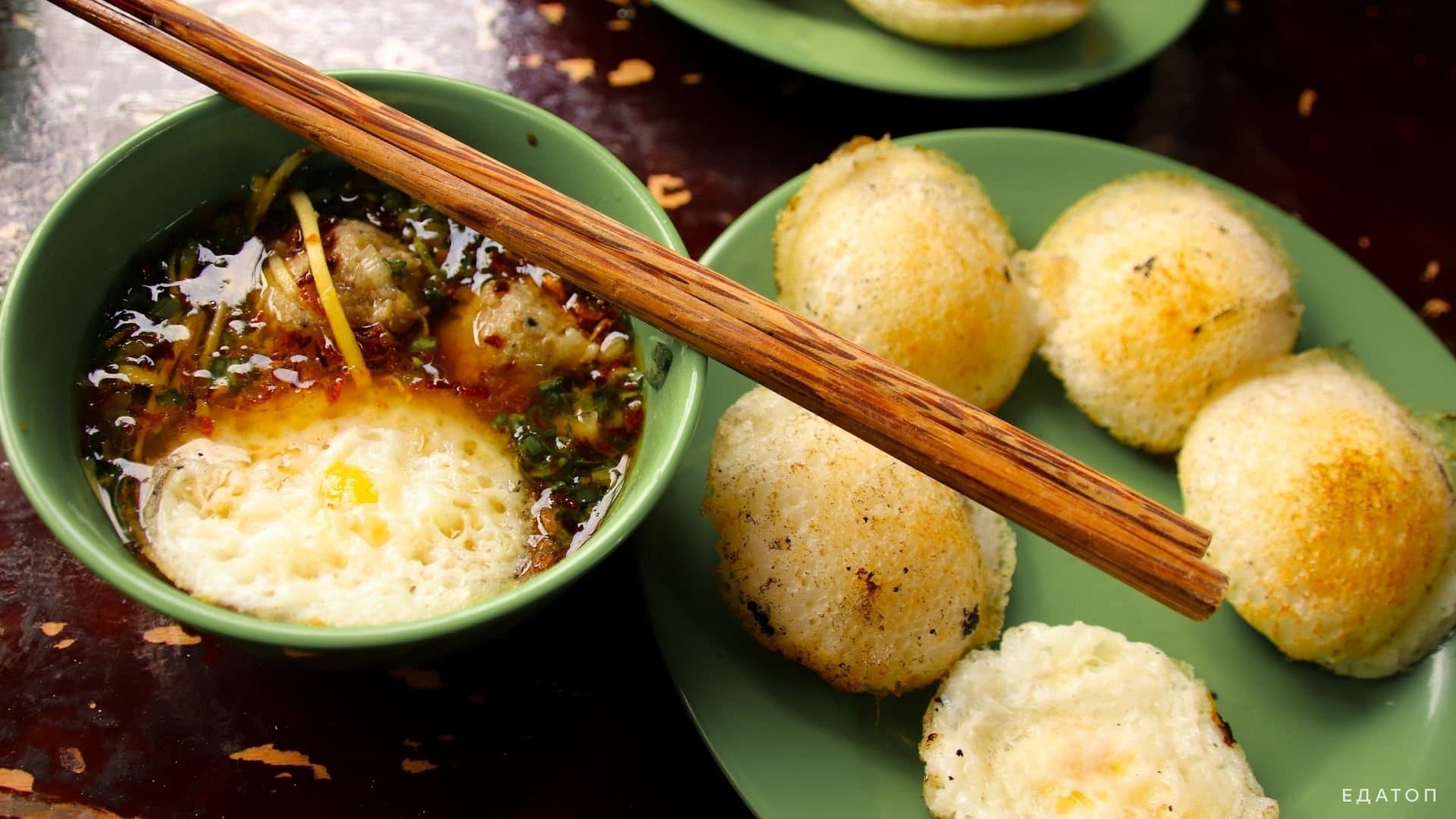 Before 938, Vietnam was under the rule of China. During this period, the Vietnamese learned to use chopsticks and to pass pork, beef, and vegetables. Noodles and tofu appeared in the diet.

The vegetarianism now so popular in Vietnam came with the rise of Buddhism.

The tradition of cooking beef originated here in the 10th century thanks to the arrival of Mongolian shepherds. The influence of the Cambodians on Vietnamese cuisine was reflected in the wide spread of Indian spices and herbs. From this time, lemongrass, mint, basil, and chili began to be added to food.

In the 19th century the colonial period began under French rule. At this time the Vietnamese diet was enriched with asparagus, avocados, legumes, tomatoes, and wine. The French introduced crispy baguette, strong coffee with milk and sorbet to Vietnamese cuisine.

Cooking is based on a harmonious combination of textures and colors, a balance of the “5 Tastes” – bitter, salty, sweet, sour and spicy, expressed, according to Buddhist philosophy, in the energies of “Yin-Yang”. The cold female Yin is responsible for sour, sweet, and spicy tastes, while the hot male Yang is responsible for salty and bitter tastes.

The Vietnamese prepare dishes from fresh foods, just before they are served. There is no tradition of preserving them. The food is not spicy, the sauce based on chili peppers is always served separately.

Vietnamese cuisine has over 500 traditional treats. Recipe of any of them may differ depending on the region of cooking.

Cooking has its own differences in the regions of the country, which is due to the climate and culinary traditions of neighboring countries.

In the north, preference is given to simple food consisting of meat and seafood. Especially popular are soups in a rich broth. Homeland of famous Vietnamese pho is considered Hanoi – the center of the northern region.

Here the cuisine is more varied and aesthetic: in the past, the royal family lived in Hue, which left its imprint on the modern cooking and design of food. Unlike the northern region, spices and seasonings are used in large quantities here.

In the south, the food consists mainly of vegetables and spicy herbs. Fish and seafood are prepared more often than in other regions of Vietnam. The influence of Thai cuisine is manifested in the tendency to sour-sweet dishes. Baguettes and croissants, cheese, and all sorts of pâtés are popular here thanks to French cuisine.

The food eaten in Vietnam is practically gluten-free, which is important for people suffering from celiac disease.

The diet of the Vietnamese consists of rice, fish and seafood, and fresh vegetables. These are foods rich in vitamins E and A, zinc, copper, potassium. They help the human body to fight free radicals, skin aging and help strengthen the immune system.

In Vietnam, it is recommended to drink only bottled water, because the local tap water contains a lot of harmful bacteria.

Foods which have undergone thermal treatment are safe for the organism: at high temperatures harmful microorganisms die, so the risk of poisoning is excluded.

Vietnamese cuisine is represented by different kinds of rice. It is used almost everywhere, served as a side dish, made into noodles, dough, cakes, sweets. The crispy rice paper is used to make delicious rolls.

For most dishes the Vietnamese serve fish sauce “nyok-mam”. It resembles soy sauce but has a sweetish flavor. Besides fish, shrimp paste, soy, sesame, garlic or peanut marinade, and chili are also popular.

Lime juice is added to many soups. Meat dishes are made from chicken, pork, and beef. Of the exotic ones, you can try the meat of crocodile, ostrich, shark, turtle, heart and blood of snake, fried scorpions. But more often the inhabitants eat fish and seafood.

The most popular Vietnamese dishes

Most treats can be sampled at street vendors, street food is represented by a wide range of snacks.

Small white dumplings made with rice flour. The latter are made with high quality rice, which is cleaned and steamed in several stages. The dumplings are filled with shrimp, seasoned with onion and pepper.

READ
What to see in Bulgaria

When served, the plate is decorated like a blooming rose, hence the name of the dish – “White Rose”. 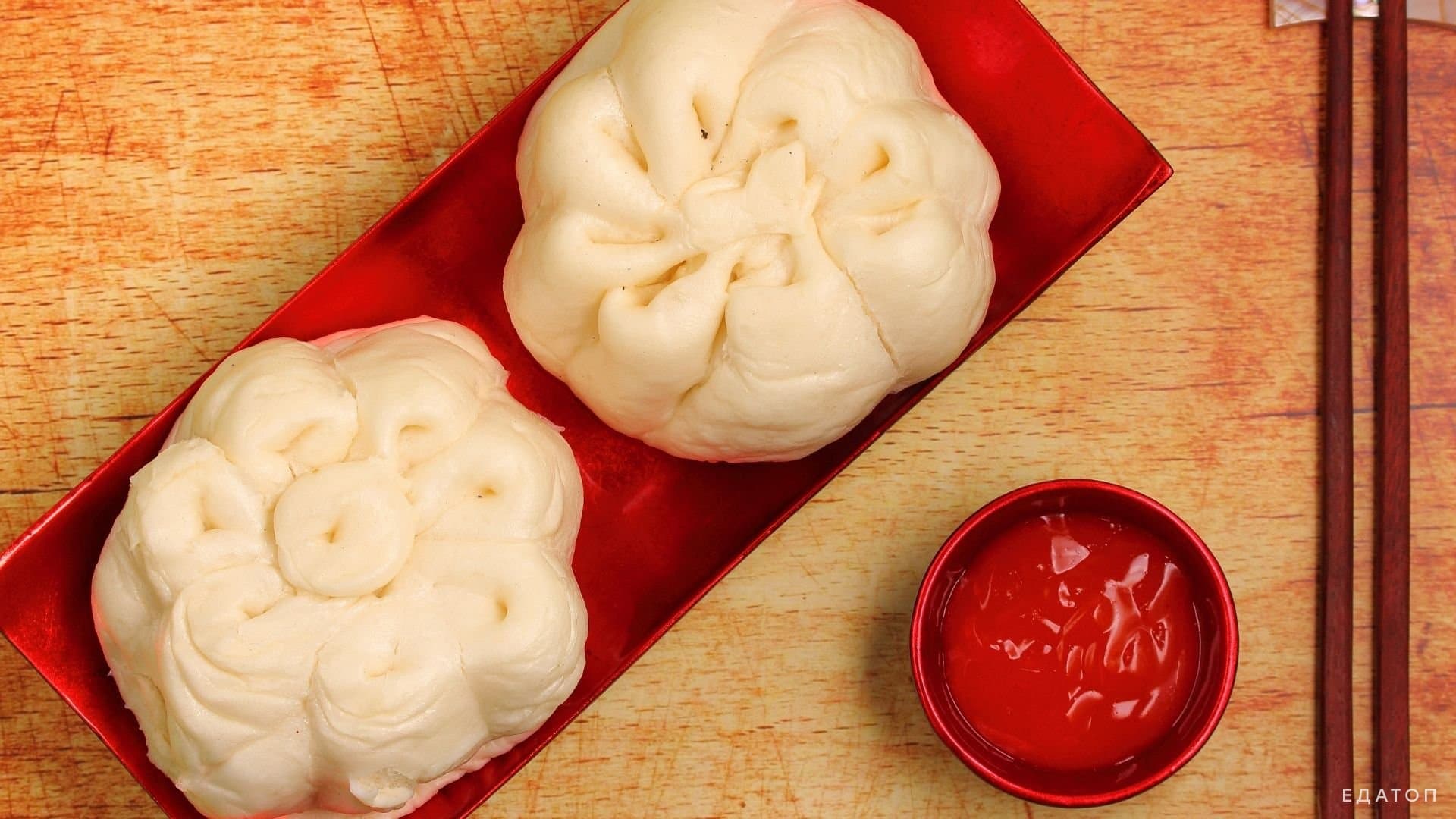 A soup cooked in broth of meat or seafood with rice noodles. Finely sliced slices of beef, pork or chicken are added. Sprouted soybean sprouts, basil, and lime serve as garnish for the pho. Chili is served separately, with which guests season the finished dish to their liking.

There are vegetarian versions of pho. The soup is based on vegetable broth and tofu pieces are added.

The Vietnamese eat this soup most often for breakfast. Tourists can try it at any time of the day. Both spoons and chopsticks can serve it.

A light and fresh appetizer cooked in steam. The rolls can be served raw. They are rolls of moistened rice paper filled with shrimp, vegetables, fresh herbs. They are accompanied by sauces such as fish sauce, chili sauce, in which the rolls are dipped and served at street vendors or in small cafes.

The main difference from the previous type of rolls – crispy fried crust and a smaller size. The filling are vegetables and rice, beef, chicken, and fresh herbs. Nem ran great with the local beer or serve as an appetizer to the main course. 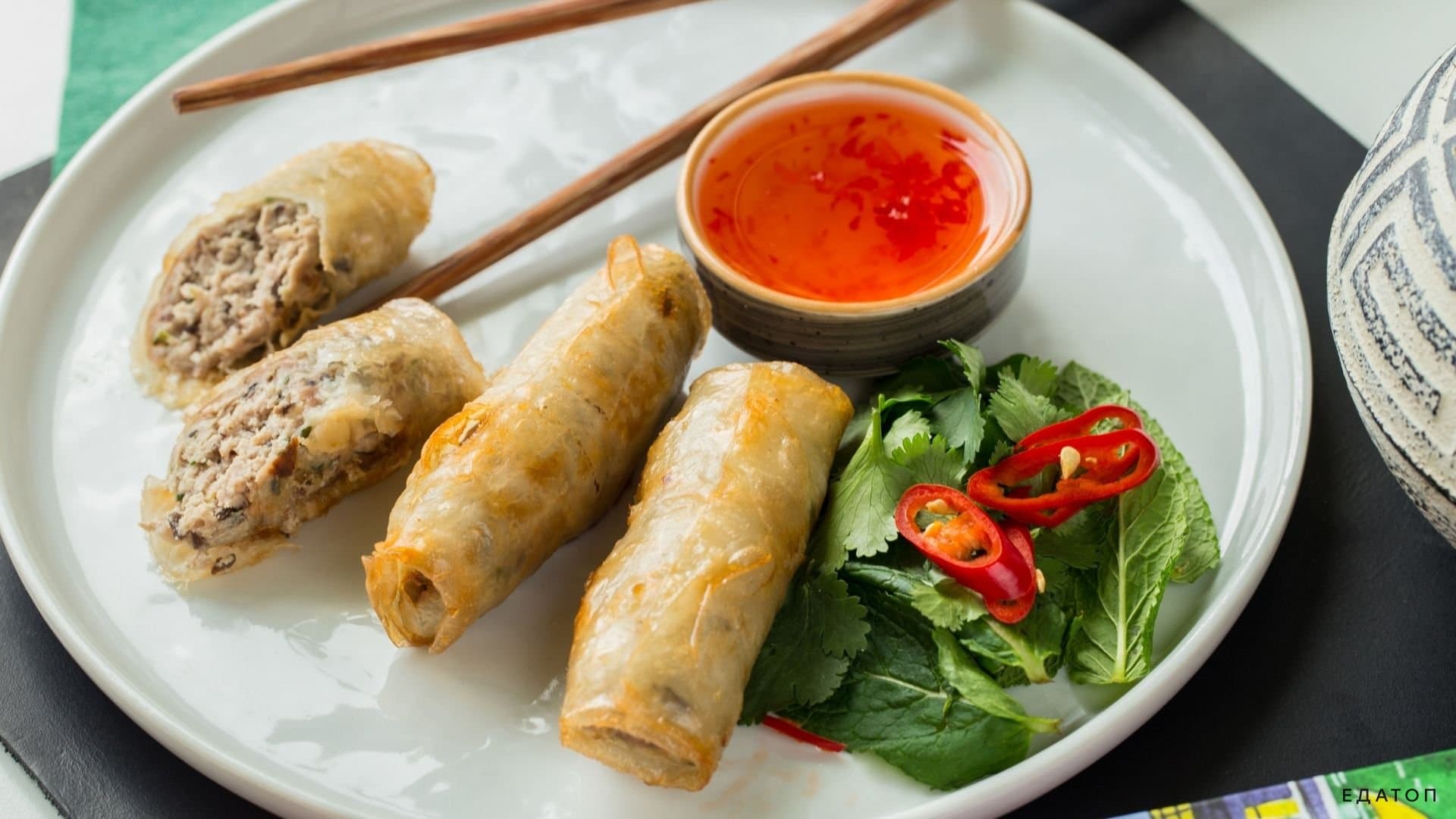 The dish is popular in all regions except Hanoi, where cao lau is preferred.

The noodles are based on a special recipe of water, rice flour and ash. The noodles are thick and dark in color. Grilled pork is cooked with beans, mint, and anise.

The most delicious versions of this dish can be tasted in central Vietnam.

A popular Vietnamese lunch. Sticky rice has a sweet flavor and firm consistency. The chicken is sliced into thin strips and seasoned with sesame seeds, onions and herbs.

Steamed rice paper, put pieces of chicken or pork, chopped shrimp, mushrooms, Vietnamese ham. The banh cuon is served with a marinade and you usually dip the ready roll in it to intensify the taste. 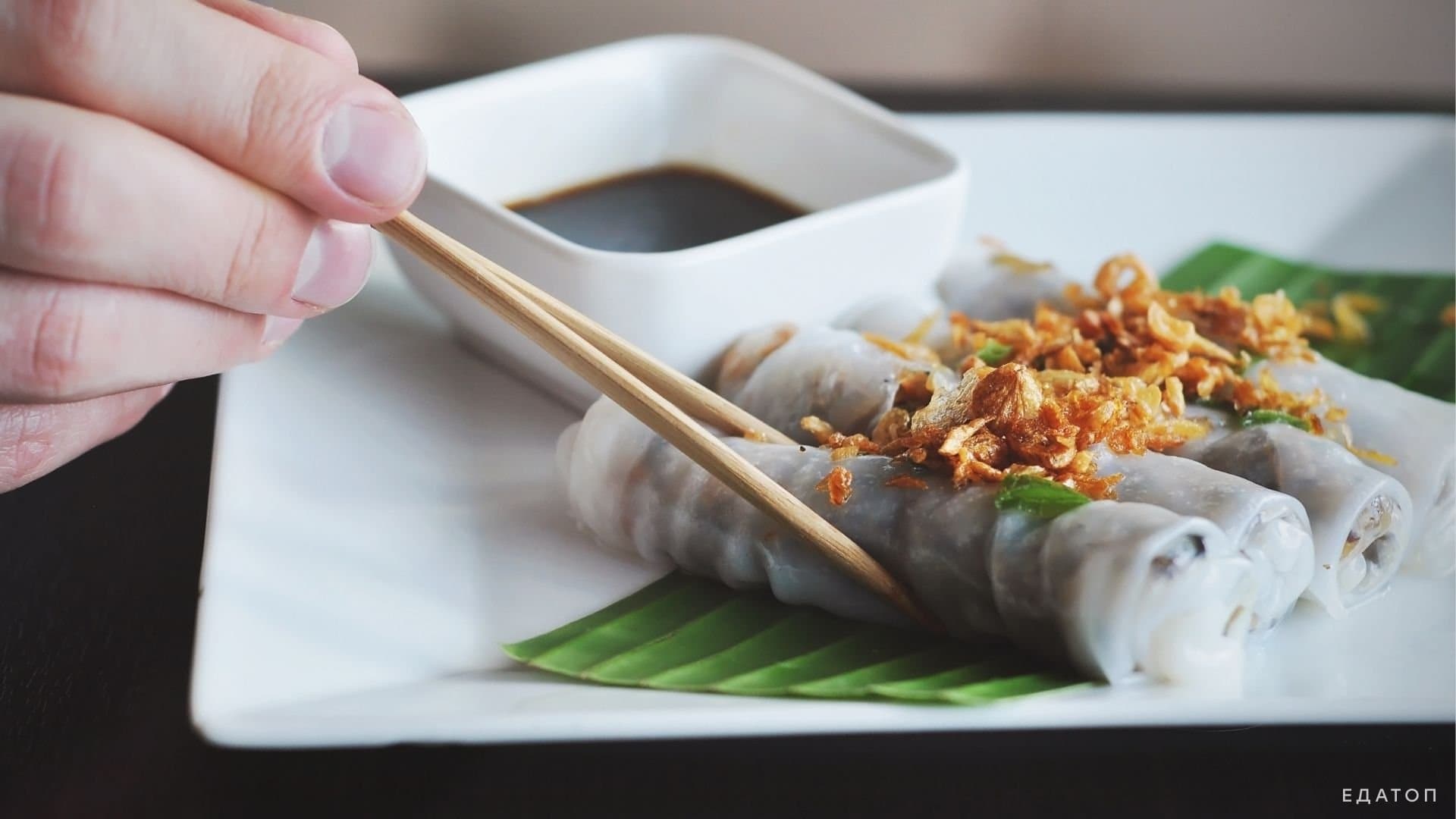 Beef is added to noodles in thin, almost transparent slices. Peanuts and chopped herbs and various sauces give the dish a special flavour and a pleasant aftertaste.

This is not just a dish, but a whole ritual. The guests cook it on their own from the pre-washed and sliced ingredients. They can be vegetables, seafood, roots, or pieces of beef. A burner of prepared broth is placed on the table, and foods are added in the desired sequence and quantity.

Lau is often served for a family holiday dinner as entertainment and a treat at the same time.

A sandwich made from a crispy char-grilled loaf with traditional Vietnamese fillings. It is filled with lots of fresh herbs and vegetables, such as different types of lettuce, cucumbers, carrots, radishes. A mix of sauces adds an unusual flavor: soy sauce, chili sauce, shrimp paste.

A hearty, crispy snack whose name translates to “sizzling pancake”. The banh xeo is made from rice flour with turmeric and lots of oil. The filling is made of vegetables, chicken or seafood. The pancake may also be wrapped in lettuce. 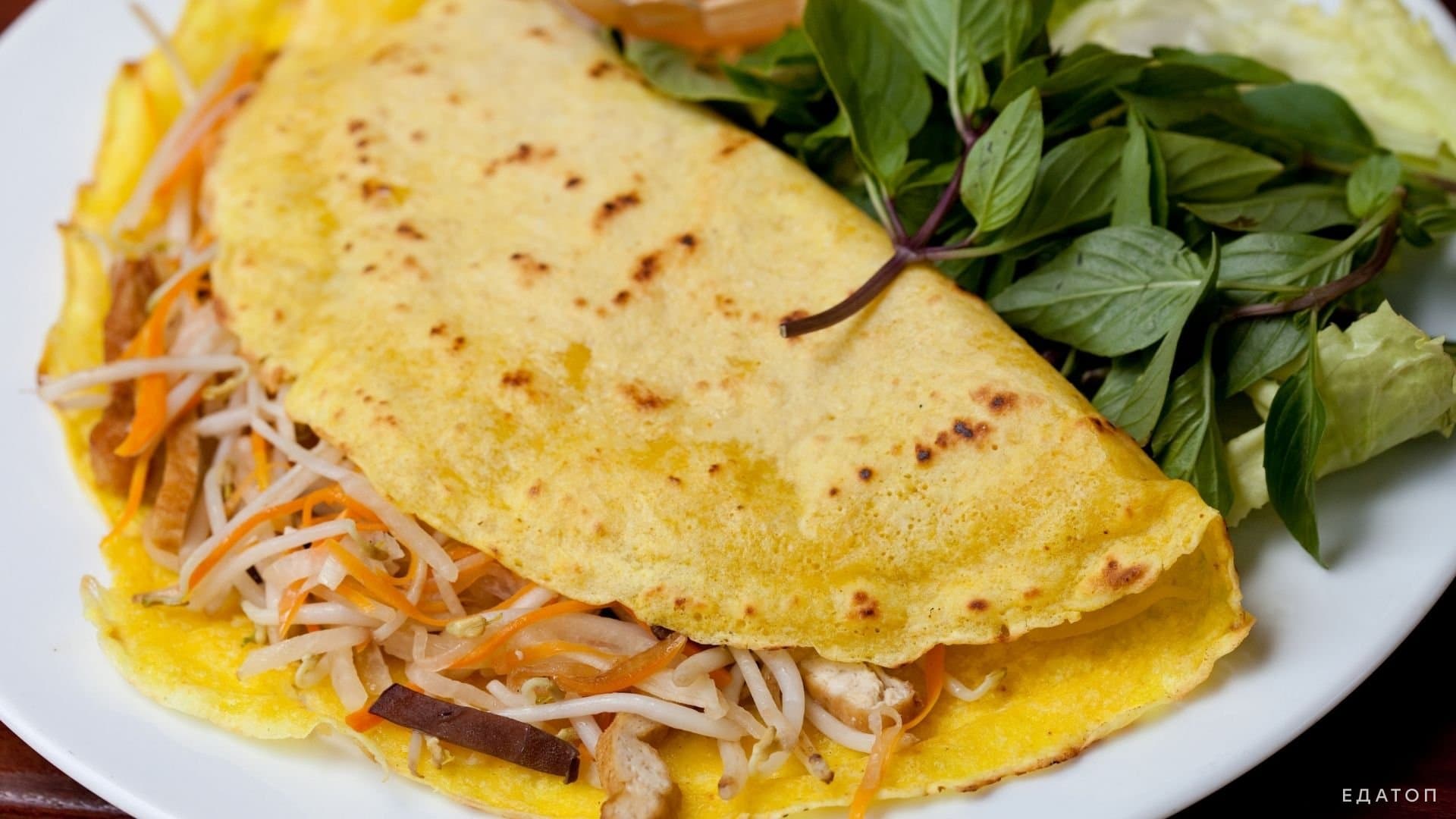 Traditional street food. It is made from 2 types of flour: rice flour and tapioca flour. The filling include dried shrimp, onions, and pork.

A Vietnamese yeast dough steamed pie. The most popular filling is seasoned pork, but a hard-boiled egg, tofu cheese, and shredded chicken may also be added. Sometimes there are sweet fillings. The bun is round in shape. Most banh bao are available from street vendors.

A roll filled with fatty pork, beans, salt and pepper. Sometimes it is topped with green onions. The filling is wrapped in banana leaves which are kept in salt water or steamed for softness.

Banh chung is a traditional Vietnamese New Year dish, but tourists can try it anytime.

Sticky rice is larger, lighter and round, has a sweetish flavor, retains elasticity when cooked, and does not break down into mush. It is used as a garnish or a base for desserts. 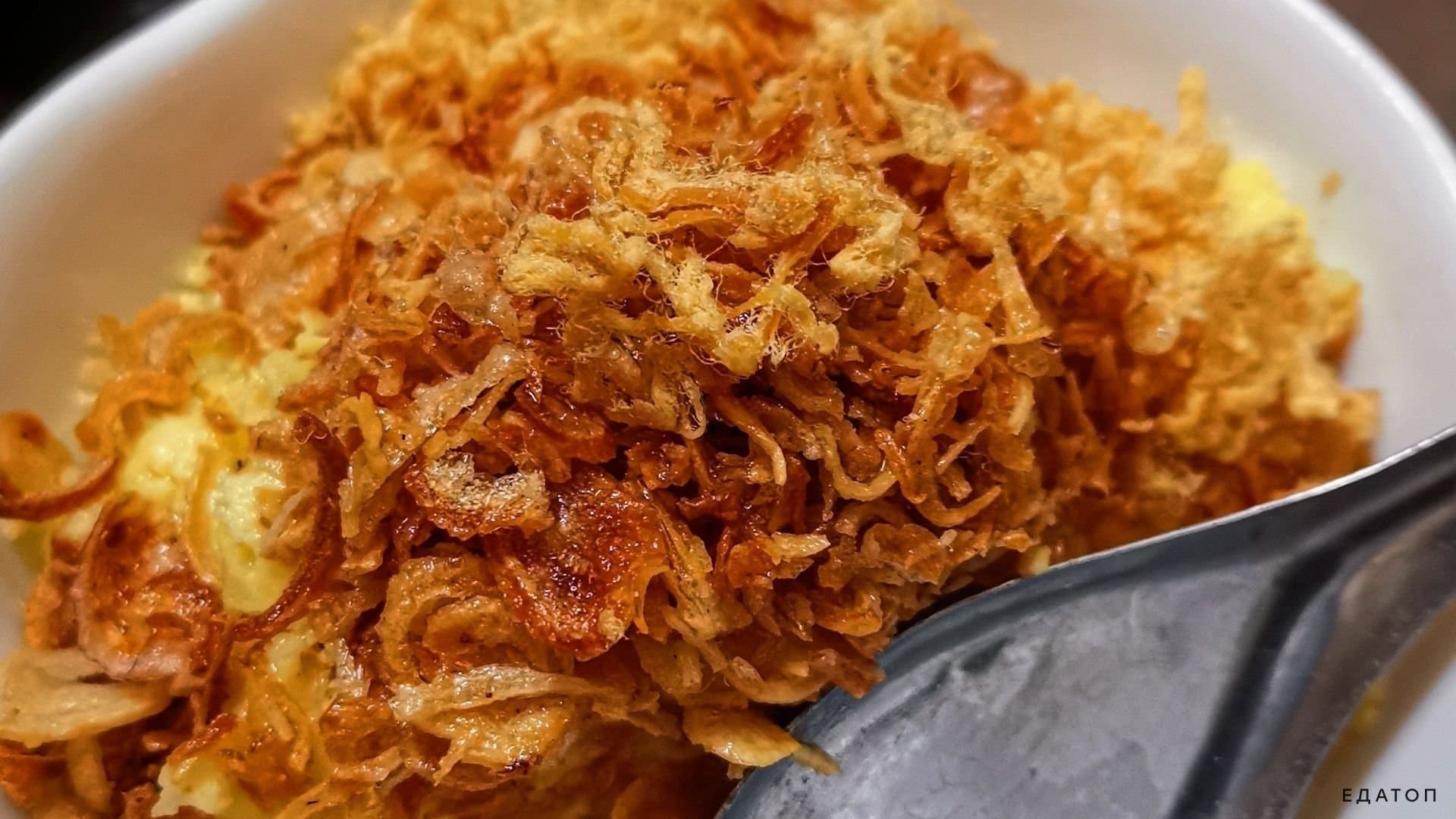 It is made by mixing several coffees: mocha, robusta, arabica. The beverage has a strong, rich flavor without sourness. Whipped egg is poured on top. It can be served cold or hot. It is recommended to eat egg coffee with a dessert spoon.

Tender meat, reminiscent of chicken, but with a slight touch of seaweed and river water. In Vietnam, not only frog legs are cooked, but also the whole carcass. It is grilled, stewed, baked in the oven, or cooked with rice porridge.

At the heart of the dish is a broth of vegetables or beef, lavishly seasoned with spices, where sliced pieces of turtle meat are added. When serving, the noodles are placed on a deep dish and the soup is poured over it. Guests choose their own additions: soy or fish marinade, lime juice, chili.

This delicacy has a distinctive flavor and original presentation. The whole crocodile is roasted on a spit and the pieces are cut off in front of the customers. Steaks are prepared from the back part, and the tails and legs are used in soups and other combined dishes. 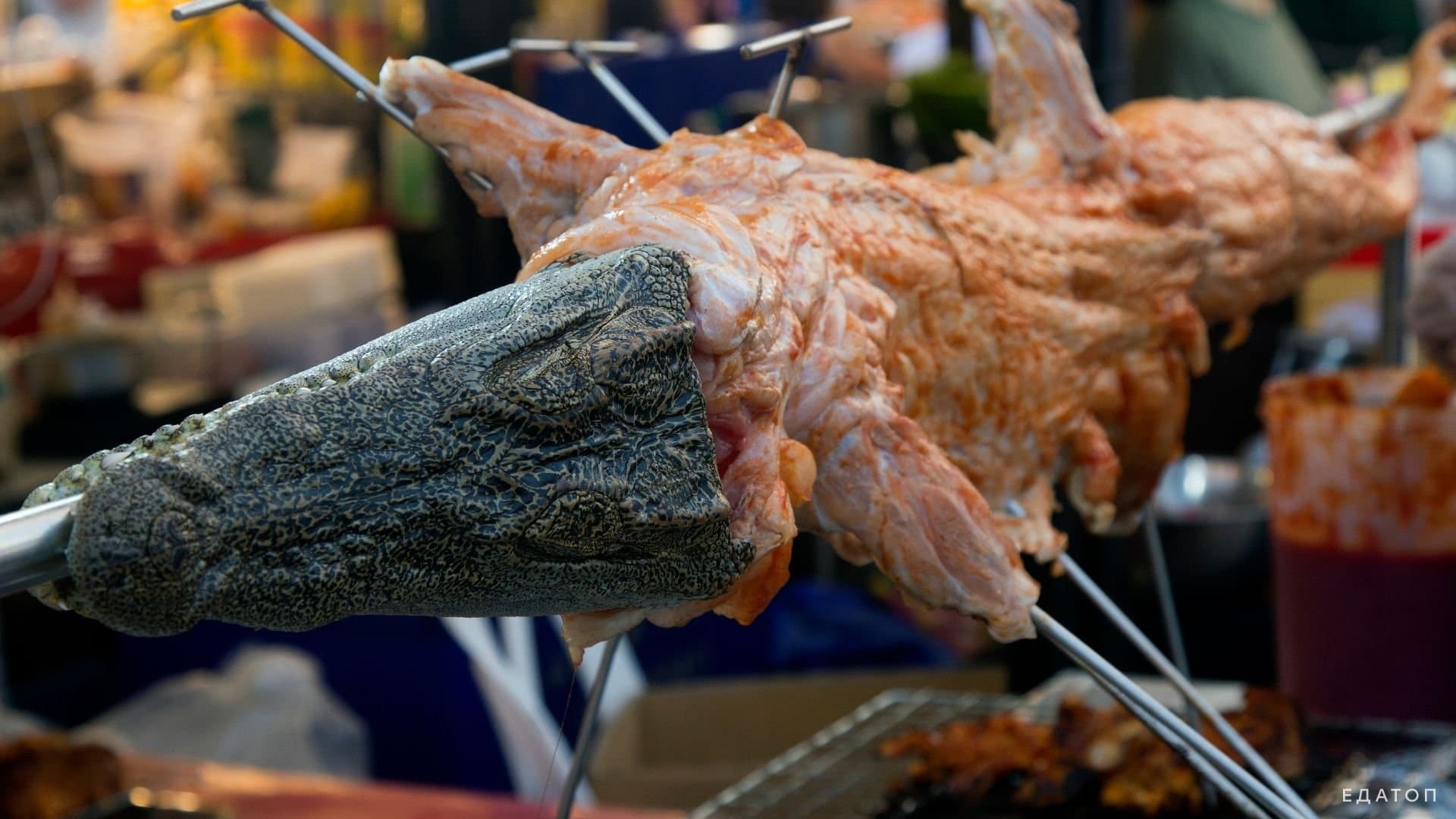 Fried crocodile is one of the exotic dishes of Vietnam.

Cooking a snake in Vietnam is a whole ritual. Visitors are brought a live snake and its head is cut off. The blood is decanted into a separate glass and mixed with vodka.

The still-beating heart is offered to swallow, without cutting it open, raw. This exotic treat is washed down with snake blood. The rest of the cobra is taken to the kitchen to prepare, for example, soup or rings in the batter.

You will need 2 groups of ingredients to prepare. 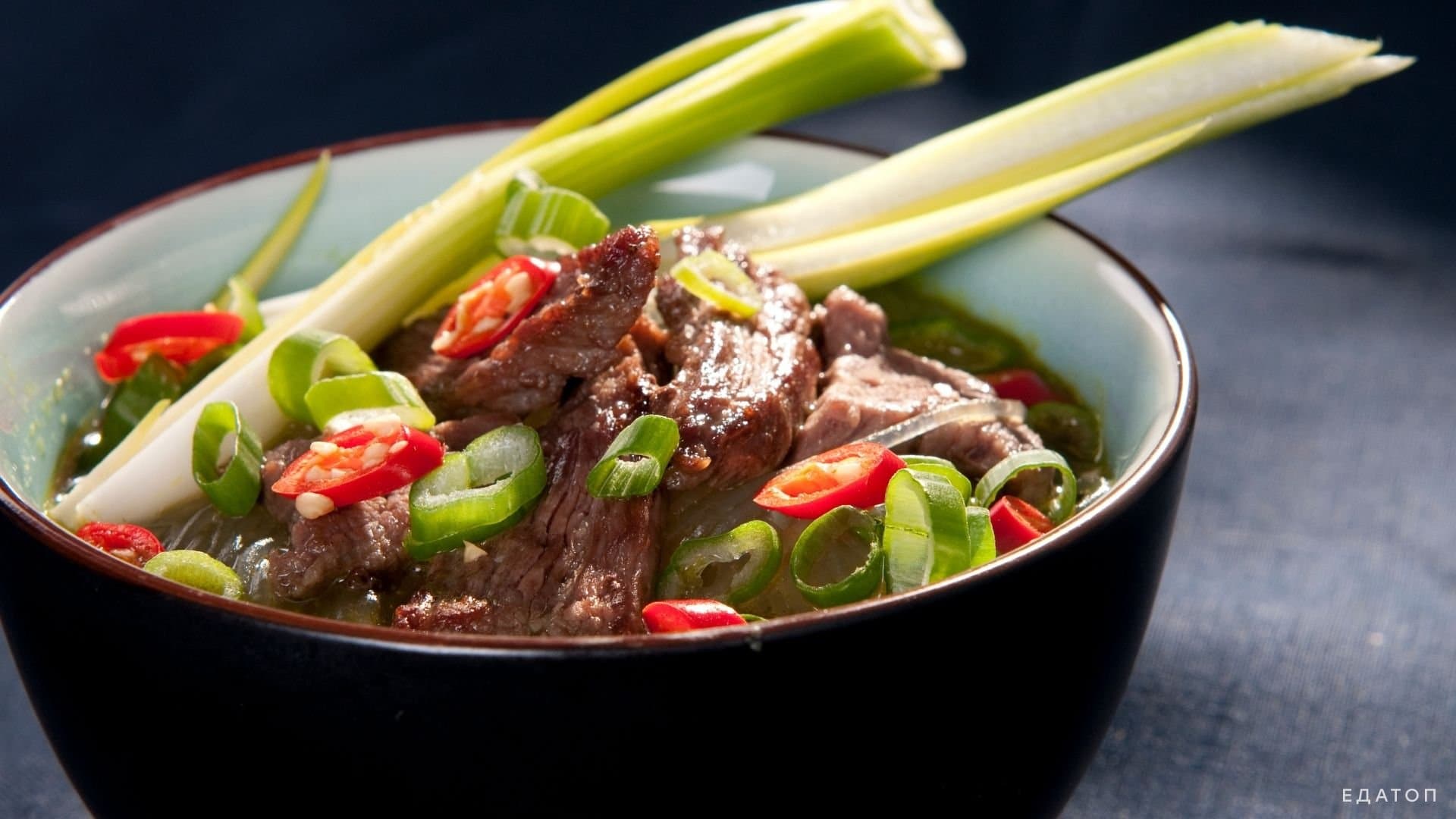