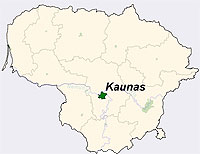 Kaunas (in Lithuanian – Kaunas; in 1795-1915 – Kovno, Kovna, in Polish – Kowno, in Belarusian – Koowna) is the second largest and most important city in Lithuania. In 1920-1940 it was the capital of the Republic of Lithuania. It is located at the confluence of the Neris (Neris, Vilia) River into the Nemunas (Nemunas, Neman) near the Kaunas Reservoir. 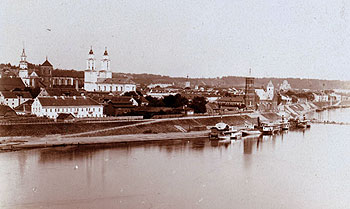 The port on the Nemunas River is at the confluence of the Neris River. The main part of the city is on the right bank of the Nemunas.

In the place where Kaunas Old Town is situated now – at the confluence of the Nemunas and Neris rivers – people have lived since ancient times. Since Kaunas was on the border with the territory of the Teutonic Order, a stone castle was built here in the 13th century. The settlement that grew into the city of Kaunas was first mentioned in historical documents in 1361 (according to other sources it was founded in 1280). The name Kaunas (Kawen, Cawen), is mentioned in the chronicles of Wiegand of Marburg, historian of the Crusader Order. The chronicles note the news of scouts being sent to Kaunas Castle to study the fortifications. Kaunas is also mentioned in other chronicles of the Teutonic Order.

Magdeburg rights were granted by the Lithuanian Grand Duke Vitovt the Great in 1408. From the middle of the 15th century Kaunas was a member of the Hanseatic League and played an important role in the economy of the Baltic Sea region and the Grand Duchy of Lithuania. The city had its first school, public hospital and pharmacy built, and its importance as a trade center with Western Europe and a river port grew. Soon Kaunas became one of the most well-appointed cities of the Grand Duchy of Lithuania. 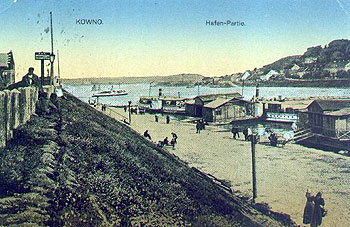 The XVII-XVIII centuries were especially unfavorable for the city. The town was attacked by the Russian army, the inhabitants were plagued by the plague, and the city lived through two big fires. At the end of the XVIII century the economic situation of Kaunas improved slightly, but in 1812 the war broke out and Napoleon’s armies crossed the river Nemunas in Kaunas. During the war, the city was destroyed twice.

In spite of that, Kaunas developed during that period. The Oginsky Canal was dug, which connected Nemunas with the Dnieper River. In 1862 the railroad went through Kaunas and connected the Russian empire with Germany. In 1898 the first power station was put into operation. These events promoted the development of trade and industry in Kaunas. Further development of Kaunas was stopped by the World War I. Until 1919 representatives of different nations and authorities stayed in Kaunas: Lithuanian Communists, Poles of Pilsudski and German authorities.

In 1920-1940 Kaunas was the “temporary capital” of the Republic of Lithuania. In 1920 the Approved Seimas was assembled in Kaunas, which was the beginning of the legislative system of the Lithuanian state. At the time of independence Kaunas grew, its population increased, new architectural monuments were built, and the city districts of Aleksotas and Vilijampolė were connected to the city center by bridges over the Nemunas and Neris rivers. These were the “golden” years of the city. 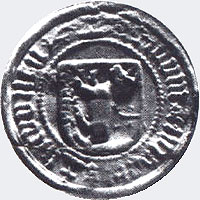 After World War II, Vilnius was restored as the capital, and Kaunas became Lithuania’s second largest city in size and number of inhabitants. Reconstruction began in the city. The city quickly developed and became an important industrial and cultural center in Lithuania.

After the restoration of Lithuania’s independence in 1991, Kaunas became one of the most visited tourist cities in Lithuania. New museums were opened in the city, the most famous monuments of architecture were restored, etc.

Since 1843, the coat of arms of Kovno province, which was also used by the provincial city of Kovno, was marked by a monument erected on the Town Hall Square to commemorate the Patriotic War of 1812. The coat of arms of Kovno was approved on 11 June 1843. “In a blue shield, a monument erected to commemorate the Patriotic War of 1812, with the inscription: ‘On the beginning of God’; at the foot of it are two rivers joining each other, as a sign that the city of Kovno stands at the confluence of the Neman and Vilia rivers.”

On May 2, 1935, the Kaunas City Council adopted a coat of arms depicting a white aurochs on a purple background with golden hooves, horns and a cross between the horns.

“On a shield crossed from below in the upper part in a red field is a white bison, the extremity of the shield is green. The shield is bordered by a narrow border of silver color”. The cross was removed, and the tip was repainted in green. Thus the colors of the Kaunas coat of arms repeated the colors of the flag of the Lithuanian SSR within the USSR.

On June 30, 1993, a presidential decree issued by the President of the Republic of Lithuania approved the emblem that reproduced the historic coat of arms: a white roundel on a red shield with a golden cross between the horns. The author of the reference design was Raimondas Miknevičius.

The Great Coat of Arms of Kaunas has been adopted by the Decree of President V. Adamkus No. 1K-1835 of May 19, 2009. The traditional shield was placed on a golden sailing ship with silver sails. Above the main shield is a small red shield with a silver border and three golden orbs. The motto “DILIGITE JVSTITIAM QVI JVDICATIS TERRAM” is on a golden ribbon at the top of the coat of arms.