19 best attractions in the Seychelles

Seychelles, located in the Indian Ocean, are famous all over the world for its clean sandy beaches, untouched rainforests, beautiful coral lagoons, nature reserves and parks. 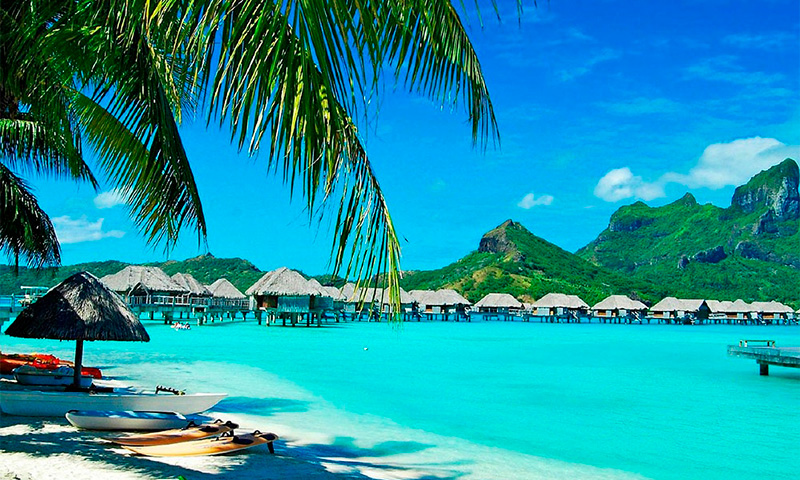 Who goes to Seychelles and why

These islands were discovered by Portuguese navigators in 1502. During the colonial period, the territory frequently changed hands and more than once turned out to be a staging ground for smugglers and pirates. Independence from Great Britain in 1976 opened new ways for the development of the archipelago.

The African island nation adopted a new constitution and laws for doing business. The tourism industry has become a lucrative business and today accounts for 75% of the country’s foreign exchange earnings.

The archipelago consists of 115 coral and granite islands. The former are small, flat atolls studded with sand. Only coconut palms grow on them. The latter are usually larger and covered with dense tropical forests.

The main tourist destination is the island of Mahe, where the capital of the Victoria archipelago is located. There are important architectural monuments and museums dedicated to the culture of local residents and the colonial era.

Holidays in Seychelles are suitable for children and adults:

The well-appointed hotels have everything you need for a carefree pastime: game rooms, swimming pools, amusement rides. Travel agencies offer exciting excursions to the palm forest of Valle de May on Praslin Island, a flycatcher reserve in La Digue, Bai Ternay Marine Park.

Seychelles are very popular with gourmets who appreciate the unconventional approach of the locals to cooking. The eclectic cuisine of the islands was formed under the influence of French, African, and English culture, so it has an original flavor. 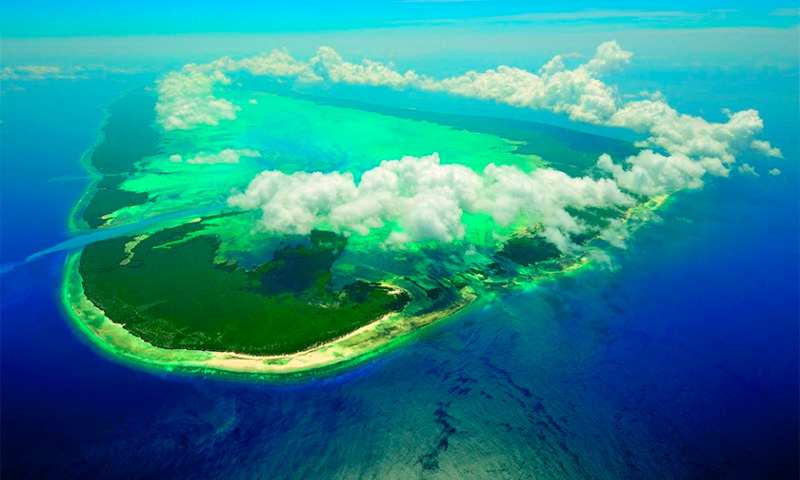 One of the largest atolls in the world, formed in the crater of an underwater volcano. It is 34 km long and 14.5 km wide. There are no luxurious beaches, fashionable hotels and entertainment. Coral atoll is practically untouched by civilization.

In the coastal zone are nesting land turtles, coconut groves are flamingos and frigate birds. In the lagoon swim colorful coral fish, jellyfish, stingrays. There is a scientific laboratory on the island. Specialists control the natural reserve, observe the life of animals and conduct excursions for those who wish. 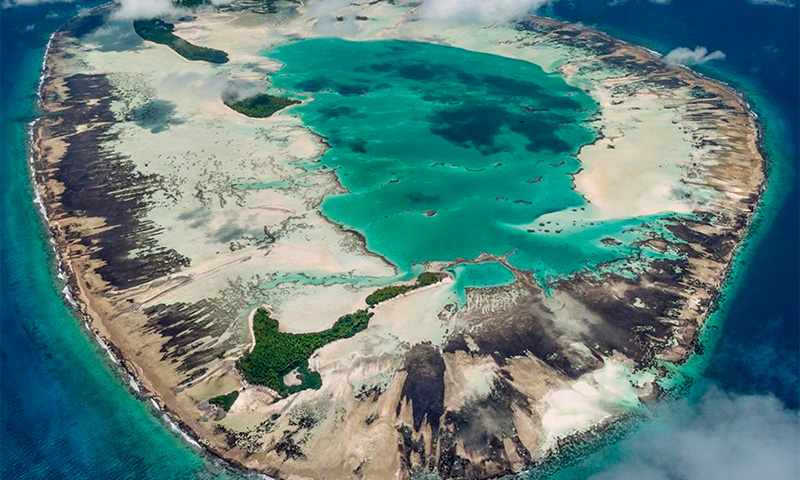 The island group includes 25 coral atolls, many of which are under state protection. There are bird and sea sanctuaries, secluded lagoons, cozy beaches. To relax in the Amirante Islands, tourists rent rooms in a hotel on Derosha or book small bungalows on D’Arros.

Exorbitant prices have turned this coral paradise into a prestigious place where politicians and celebrities spend time flying here on private planes. 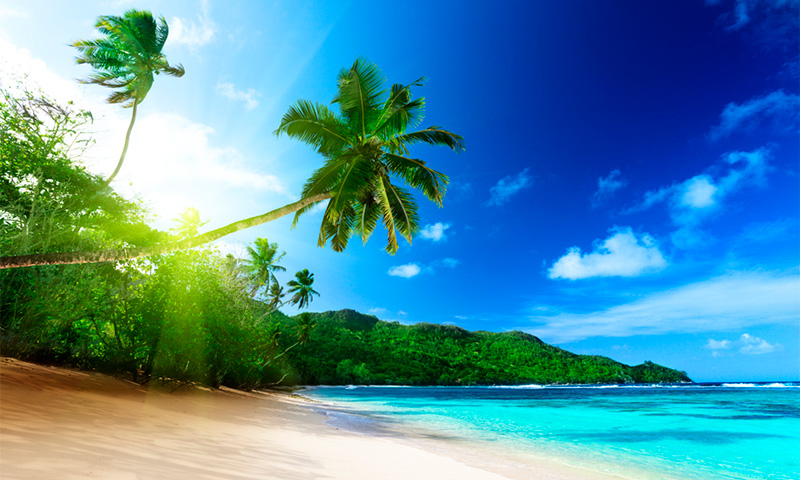 The largest and most populous island in the Seychelles. At its center is the capital of the state – Victoria. Many tourists prefer to rest here, going out to explore the neighboring islands as part of excursions.

Guests like the developed infrastructure, friendly locals, numerous entertainments on the beaches. In Victoria, travelers are waiting for a lively market, Botanical Gardens, museums, squares and parks. 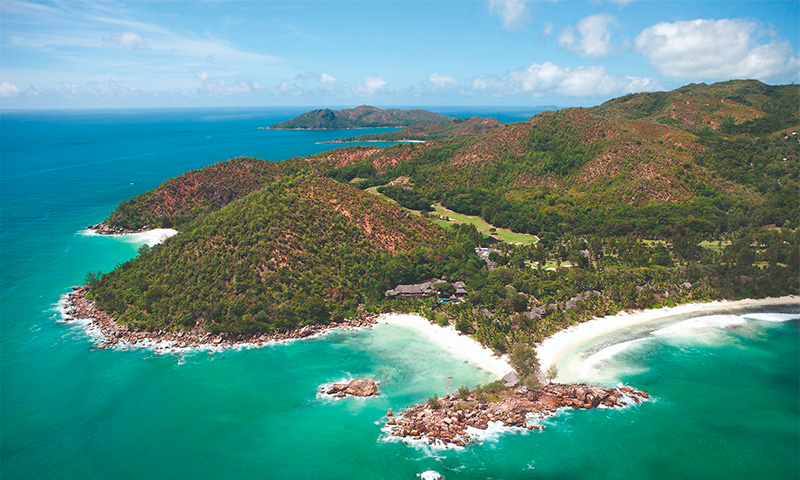 An island of the Seychelles archipelago, which has a mountainous surface, is overgrown with relict trees. It preserves the rarest Seychelles palm with the world’s largest fruits and seeds.

People get here by boat, catamaran or by air. In the coastal zone are open hotels for all tastes and wallets, restaurants, beaches. Locals in the tourism business offer glass-bottom boat rides, excursions to neighboring islands, hikes in the woods.

READ
Top - 10 most beautiful cities in the state of Oklahoma, USA 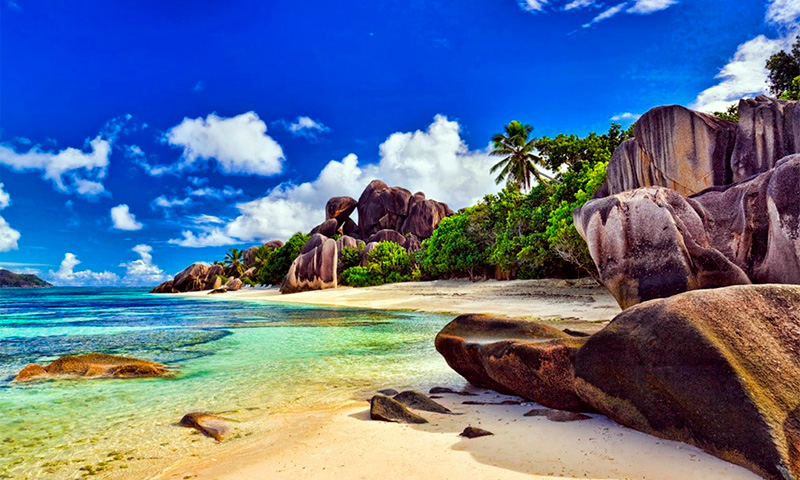 An island of 10 km² near Mahe and Praslin is a popular tourist destination. The coastline is indented with narrow beaches of soft sand, palm trees and rocks protect from the hot sun. Waves break on the coral reef, so it is always quiet near the shore.

The central beaches have water attractions, bars, and hotels. Koko Bay can be found to the southeast of La Digue, and a shallow bay with clear water to the north. To the west is Union Estate Park, and on the opposite side of the island is the Flycatcher Preserve. 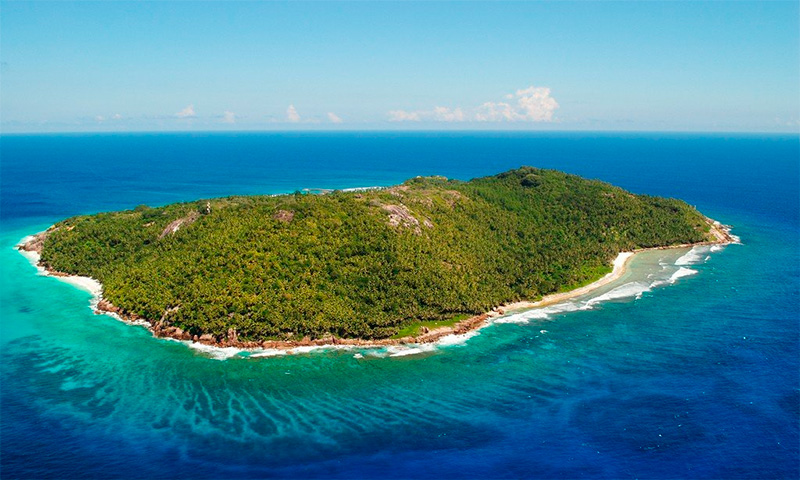 Frigate Island is equipped with a secluded private resort, considered one of the best in the world. Its area is only 2.19 km².

Mount Signale rises on the west side and a river runs nearby, framed by tropical trees. A rare species of bird, the Seychelles shama-thrush and black-billed beetles live in the shade. In the center of Fregat stands a fashionable hotel for wealthy tourists and a spa complex. On vacation, guests engage in diving, underwater fishing, tennis, yachting, and water skiing. 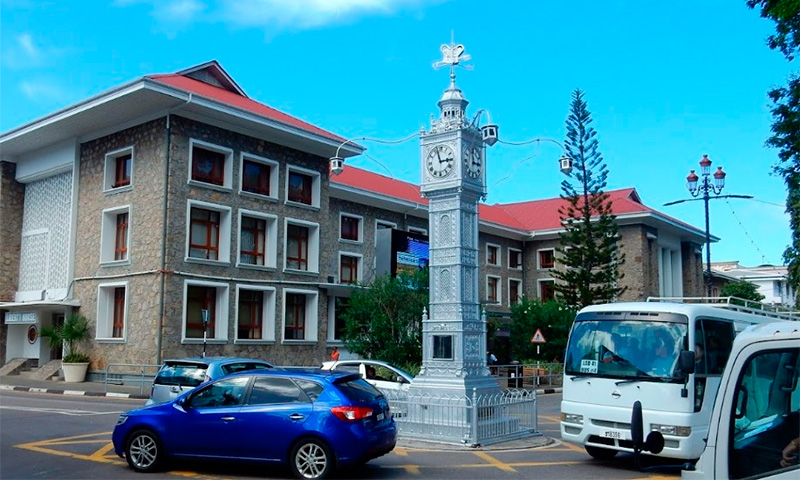 In Victoria, at the intersection of Revolution and Independence avenues stands the elegant Clock Tower. It is an exact replica of London’s Little Ben. It was installed in 1903 in honor of the British Queen Victoria. This is evidenced by the inscription engraved on the stone next to the tower.

The architectural monument is painted in silver color. There are lights mounted on top that turn on at night. Tourists come to listen to the melodious chime and take bright pictures.

The Cathedral of the Immaculate Conception 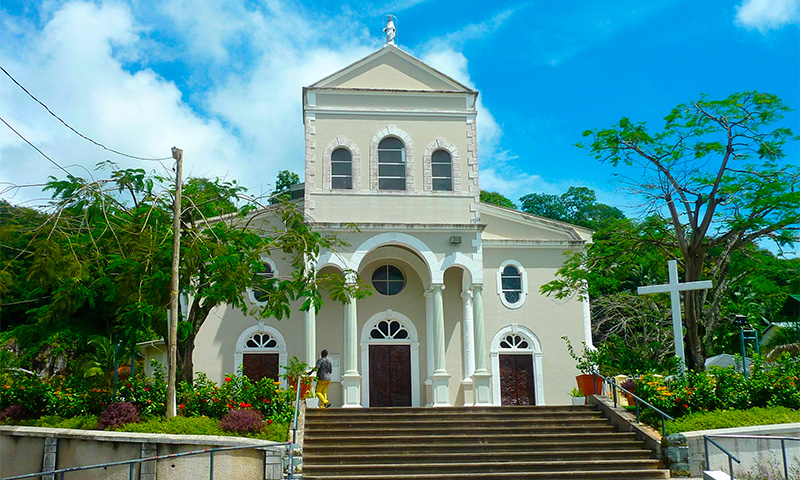 The Cathedral of the Immaculate Conception on Oliver Maradan Street in Victoria was completed in 1874. The temple with its snow-white walls, slender columns, tall arches and semi-circular windows is a real jewel in the city.

READ
The 10 most beautiful beaches in the Caribbean

On the facade of the installed clock, beating out the exact time every 30 minutes, the vaults are decorated with tracery ornaments. Inside there is a marble altar and statues of saints. Bishop Felix Paul is buried in the crypt. 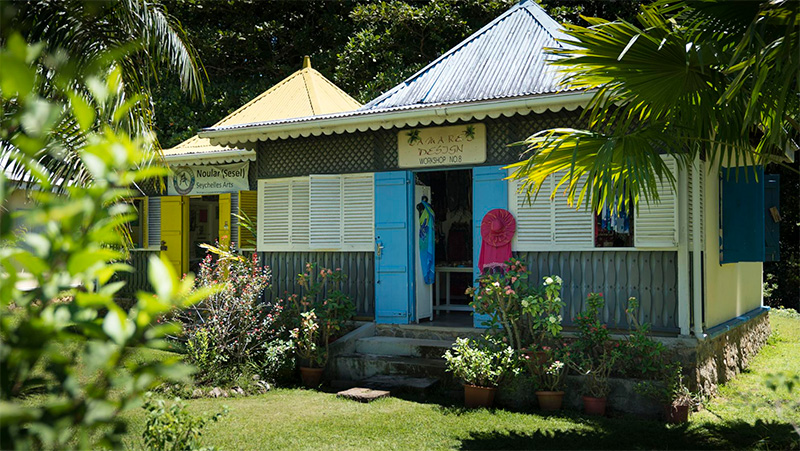 A coconut plantation on the island of Mahe includes a mansion and an estate. There is a museum in the house, well illustrating the colonial atmosphere of the last century. Among the exhibits are antique furniture, belongings of the former owners, and paintings by local artists.

Several Creole lodges are placed near the homestead, where they have opened a Crafts Museum. On the tour, guests weave baskets, make scrappy crafts, brew aromatic soap, and visit a souvenir store with jewelry, essential oils, and seashells. 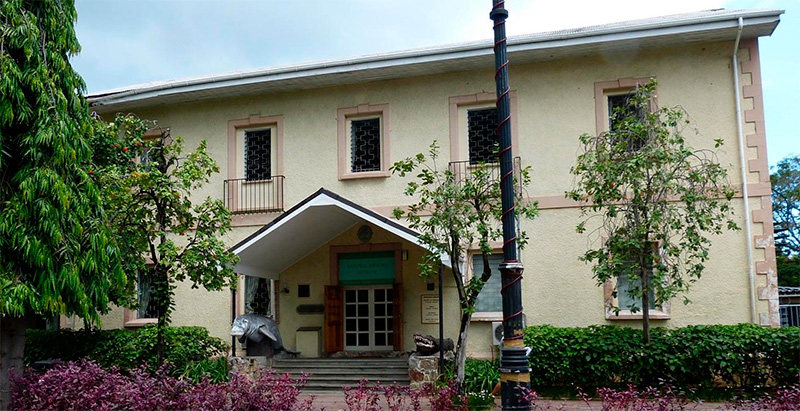 The National Library building on Mahe is home to a museum with splendid historical exhibits. Paintings from shipwrecks, African musical instruments, and national costumes are on display.

The centerpiece of the collection is a map of the islands, made by the Portuguese Pedro Reynel in 1517, and the Stone of Possession, laid by the French to mark the fact that the territory became their colony. In a separate room is an exhibit telling the story of black magic, which used to be widely practiced on the islands. 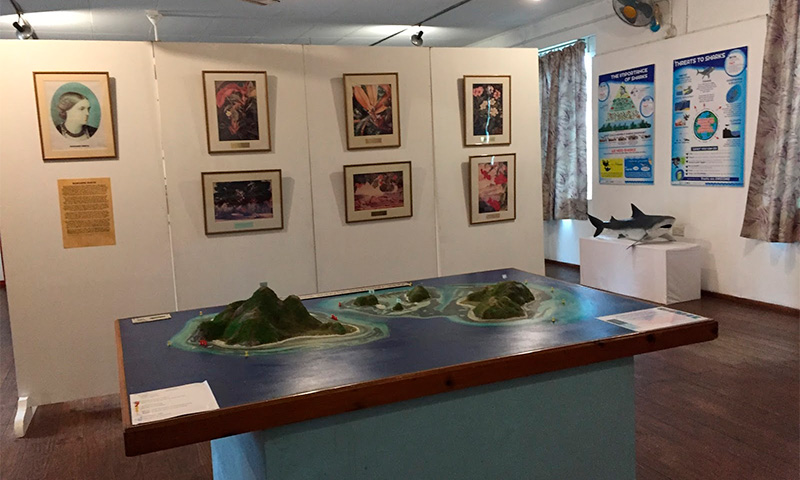 Victoria has a Museum of Natural History that showcases the rich flora and fauna of the region. The first floor has a collection of tropical butterflies, beetles, moths, stuffed birds, turtles, and crocodiles.

The second floor contains reproductions of paintings and engravings by Marianne Norton, depicting the nature of the archipelago, scenes from the life of local peasants, seascapes. The original works are preserved in Britain. 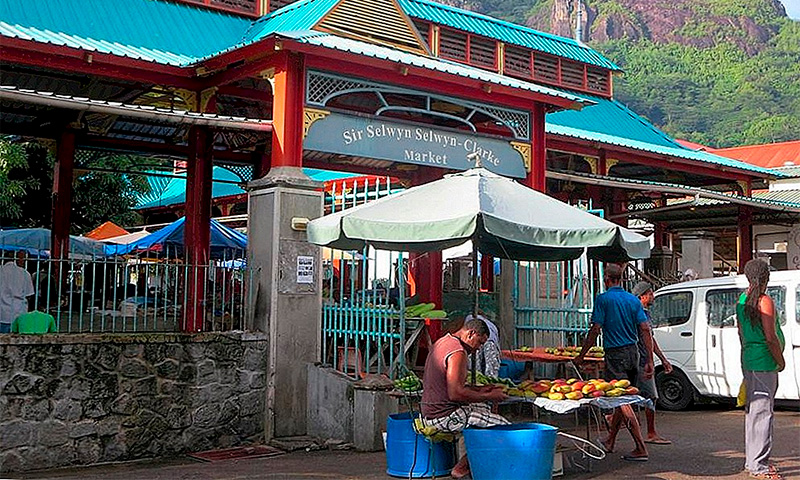 To discover the local color and buy original souvenirs, head to Labren Market in Victoria. The lively bazaar is designed especially for foreigners. 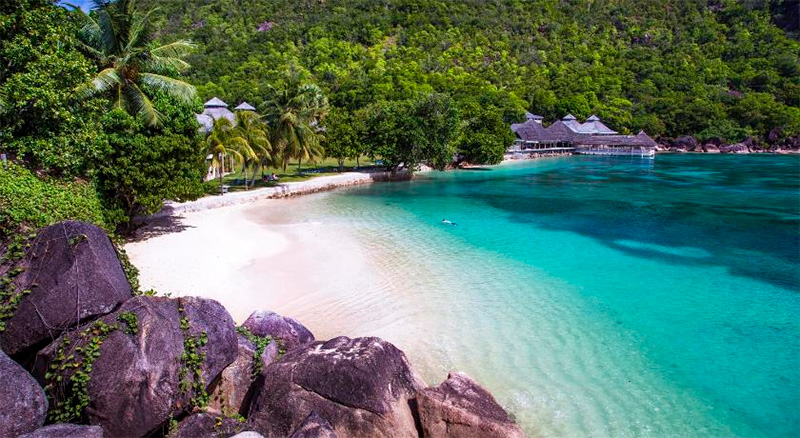 The nature park in the center of Praslin covers an area of 19.5 hectares. In the relict forest, there are six species of palm trees, sedges, ferns.

The fauna is represented by black parrots, blue doves, owls, bats, chameleons, snakes and frogs. Through the park among streams and waterfalls there is a hiking trail, the trip takes about an hour. It is forbidden to camp overnight, smoke or light fires in the reserve. 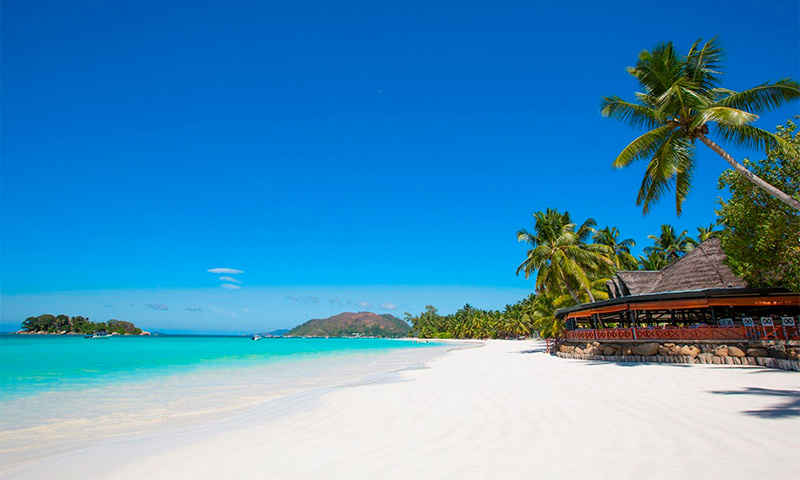 Praslin has a beach 2 km long. The wide shoreline is framed by tall palm trees. The white fine sand heats up poorly, at the entrance to the sea are beautiful granite boulders. The descent into the water is smooth, in shallow water there are many crabs and colorful fish.

Nearby moored boats and yachts of local residents. For a small fee, they offer tours to neighboring islands and walks on the sea. Across the road from the Côte d’Or beach, there are grocery stores, souvenir shops, restaurants and hotels. 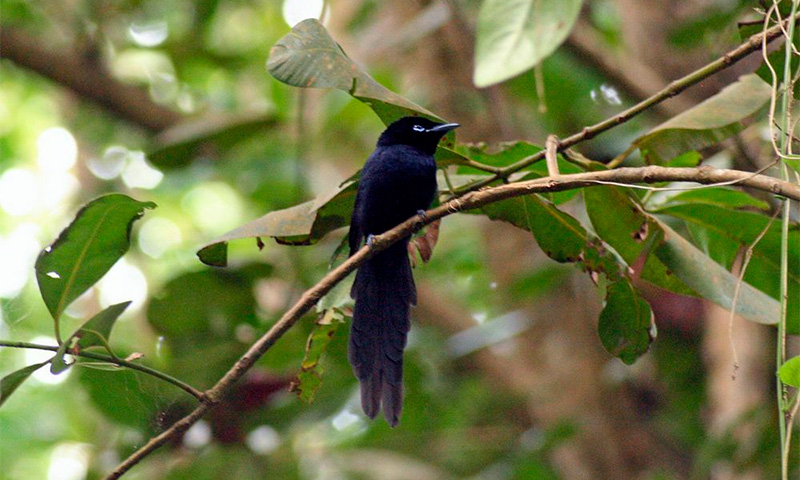 On La Digue, near the village of La Réunion, is the Flycatcher Reserve, designed to introduce tourists to wildlife. Rare trees, flowers and shrubs grow in a small area. Among the lush greenery lives the Seychelles paradise flycatcher.

This small bird is difficult to notice – it hides from people and flies very fast. In addition to flycatchers in the park settled flying foxes and big turtles. There is a scientific center in the park that deals with the study and protection of flycatchers. 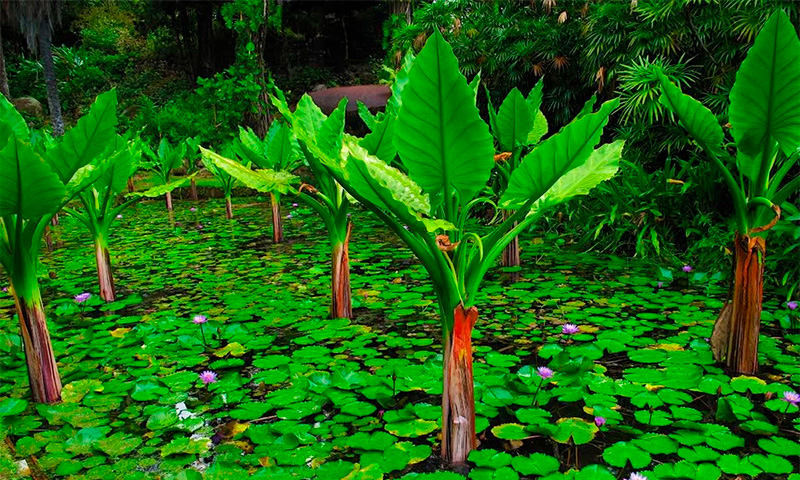 The Victoria Botanical Garden was created in 1901 by local naturalists to preserve rare plants, recreation and ecotourism. The vast area within the city limits is planted with fruit and tropical trees, shrubs and flowers. Benches and beautiful lanterns are placed along the alleys. 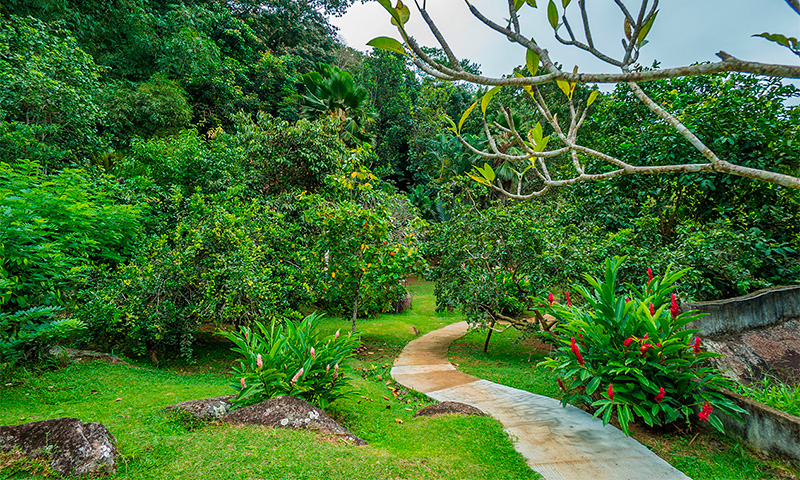 Near King’s Bay on the outskirts of Victoria, French colonists planted a spice garden in 1772.

Today it is a private property consisting of a manor house and a park. Tours of the garden are regularly held – tourists are shown coffee trees, cinnamon, vanilla, avocado, and ginger. In the mansion open national cuisine restaurant, souvenir store and museum, which tells about the life of the planters of the XIX century. 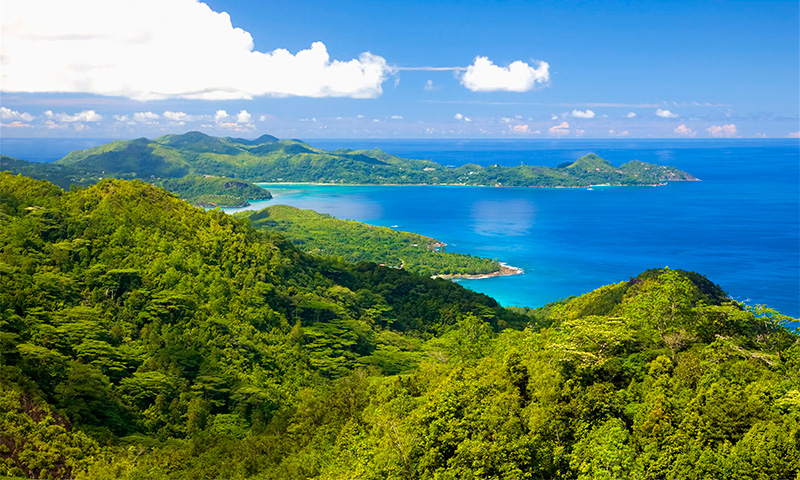 The largest national park of the Seychelles is located on the Mohe. The total area of the reserve, created in 1979, is more than 3 thousand hectares.

It includes mountain peaks, mango forests, valleys and rivers. For tourists are equipped with trails with different levels of complexity. Some of them pass through an abandoned mission and the ruins of a cinnamon processing plant. Hiking enthusiasts enjoy spending a whole day here, exploring the magnificent scenery. 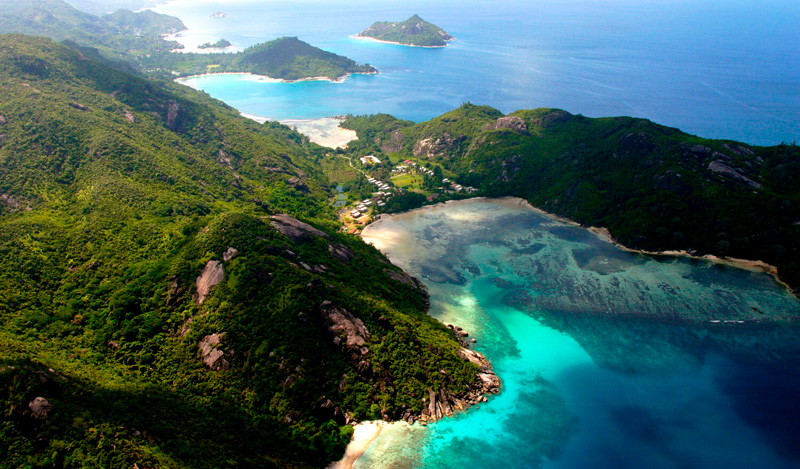 The Seychelles government is doing everything to protect the coral reefs. The coastal area in the western part of Moe is considered a national reserve and is protected by the state. The marine park stretches between the capes of Matoopa and Ternay is a unique place. Thanks to the reefs, there are no strong waves and the water is always warm.

Scuba diving, you can see the beautiful corals, crabs, lobsters, stingrays in the coastal waters. Excursions to the marine park are carried out on yachts and catamarans. The price includes a stop on the reefs for snorkeling, a barbecue on board, and a tour of the small islands.