On average, about 17 thousand meteorites falls to Earth per year, most of them – in the equator. However, points of attraction also exist in other areas. One of them is Estonia, the country with the highest number of meteorite craters per unit area in the world. 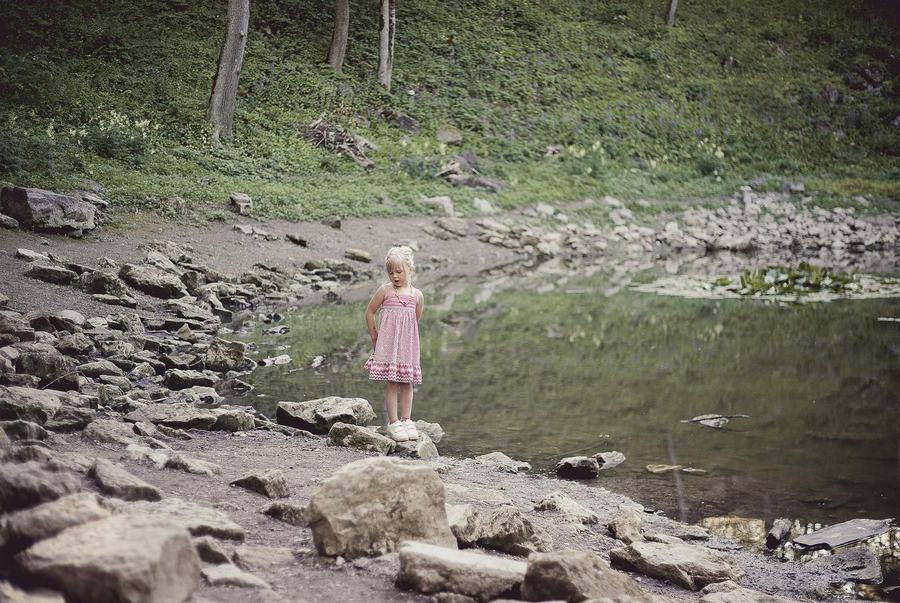 The first fiddle of Estonia in this sense is the Kaali meteorite field, located on the island of Saaremaa. Meteorites fell about 7500-7600 years ago, causing devastation comparable to the explosion of a small atomic bomb. The field consists of nine craters – one large (110 meters in diameter and 22 meters deep) and eight smaller ones located a couple of hundred meters apart. Around the beginning of our era, Lake Kaali was surrounded by a massive stone wall, near which many bones have been found, indicating that it was a place for sacrifice.

Saaremaa TIK / One of the craters at Kaali meteorite field

Many Estonians have probably been to Saaremaa and have seen the famous Kaali meteorite crater. But this historical place has not yet revealed all its secrets. 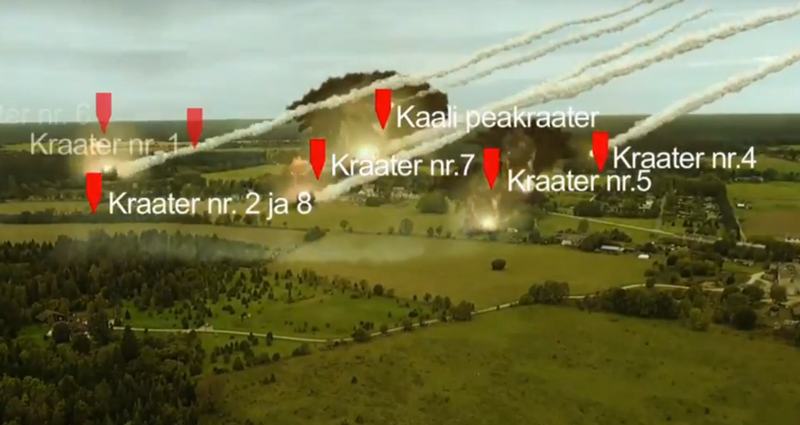 Here is a bit of history and a video of how you can fly over Kaali from a bird’s eye view and see that there are at least eight other meteor craters within a kilometer radius around it together with the camera crew of Maaleht weekly.

One of the largest natural sites in Estonia, Kaali Meteor Crater Group, is located on Saaremaa Island, 18 km north of Kuressare. There are nine meteor craters in the 50 ha landscape reserve.

The main crater has attracted the attention of researchers since the first half of the 19th century, when the work of Johann Wilhelm Ludvig von Lütze (1756-1842) about the nature and history of Saaremaa was published in 1827, in which he explained the origin of the crater by the explosion of the underground fire.

The idea about the meteoritic origin of Kaali Lake was first suggested in 1922 by J. Kalkun-Kaljuväe. A few years later, Alfred Wegener, a specialist in the field of atmospheric physics and the founder of the theory of continental drifting (1912) came to the same conclusion.

Based on the assumed angle of the Kaali meteorite’s impact trajectory to the Earth’s surface (about 45 degrees), the researchers calculated the following basic physical characteristics of the meteorite and the parameters of its flight trajectory: * initial mass of 400. 10,000 t *the mass at collision with the surface of the Earth – 20. 80 t *Early re-entry velocity 15. 45 km/sec *end velocity 10. 20 km/sec. *The debris, which formed small craters as a result of the impact, broke away from the meteorite at an altitude of about 5. 10 km. *Research in recent years indicates that the meteorite which fell to form the main crater was 3-6 m across and had a mass of 46 tonnes. *Crater age 7500-7600 years.

At the bottom of the crater there is a natural body of water, Kaali Lake, the size of which varies significantly depending on the season and year (from 30 to 60 m in diameter and from 1 to 6 m in depth), and during the dry season it almost dries up. In such cases, in the center of the lake are exposed boulders, the reason for which is said to be that the owner of Kaali manor wanted to make an island in the center of the lake and place a gazebo there.

During floods the trunks of the trees growing on the slopes of the crater go under the water one and a half meters.

Crater 1 is an overgrown hollow and is located on farmland not far from the main crater. It is 39 m in diameter and 4 m deep.

The double crater 2/8 was formed as a result of simultaneous impact of two meteorite fragments on the green surface. Its northern part (2) has a width of 27 m and a depth of 2 m, the southern part (8) – respectively, 36 m and 3.5 m.

Crater 3 is 33 m in diameter and 3.5 m deep. The crater is located 250 m east of crater 2/8 on a private property. The bottom of the crater fills with water in the spring and dries up in the summer.

Crater 4 is located 300 m east of the main crater by the road to Kyljala. Excavations have greatly changed the original appearance of the crater.

Crater 5 is located in a pasture 170 m southwest of crater 4.

Crater 6 is a little visible hollow near the nasip of the highway. It is 26 m in diameter and 0.6 m deep.

Crater 7 was not discovered until 1965. The crater has an elongated outline, with an average diameter of about 15 m and a depth of about 1 m.

Kaali Crater attracts thousands of tourists a year, but its “smaller brothers” are not as popular. Many of them are on private territory, to get to them is not so easy. Journalists were helped by technology: craters were filmed from a drone.

Senior researcher of the Institute of Ecology and Geology of the University of Tartu Juri Plado said that in the spring of 2016, work was presented, in which using radiocarbon analysis gave the most accurate date to date of the fall of the Kaali meteorite: 1500-1600 BC.

The Kärdla meteorite crater in the northeastern part of Hiiumaa is 4 km in diameter and more than 500 meters deep. It was formed almost 455 million years ago during the explosion of a giant meteorite that fell in the open sea. Since the remains of the crater are hard to see today, a smaller model has been built, giving an idea of its size and proportions.

The Ilumetsa meteorite craters in Võru County are famous for their ominous names: Pyrguhaud (Hell’s Grave), Sugawhaud (Deep Grave), Kuradihaud (Devil’s Grave) and Tondihaud (Devil’s Grave). The largest of them is Pyrguhaud, which is 80 meters in diameter and 12.5 meters deep. The craters are accessed by a comfortable pathway decorated with wooden sculptures of fairy tale creatures.

About 15 km from the Ilumets craters, near the town of Räpina, is the fifth largest meteorite crater in Estonia, Tsyirikmägi. The crater is 40 metres in diameter and 5.5 metres deep.

The largest meteorite crater in Estonia is difficult to see – it is located at the bottom of the Baltic Sea between the islands of Osmussaari and Pakri. It is called Neigrund and its diameter is about 7 km. Earlier it was assumed that it was formed in the Ordovician about 470 million years ago, but later studies have revealed a possible Cambrian origin (about 535 million years). The crater is at the bottom of the sea and is not exposed on the surface. 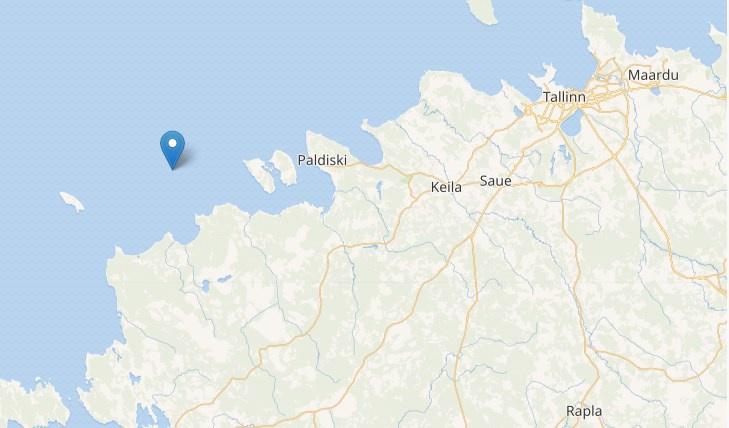 It is believed that the boulders of gneiss-like breccia (pictured below) found on the coast of Osmussaar, a neighboring island, were thrown there as a result of an explosion. 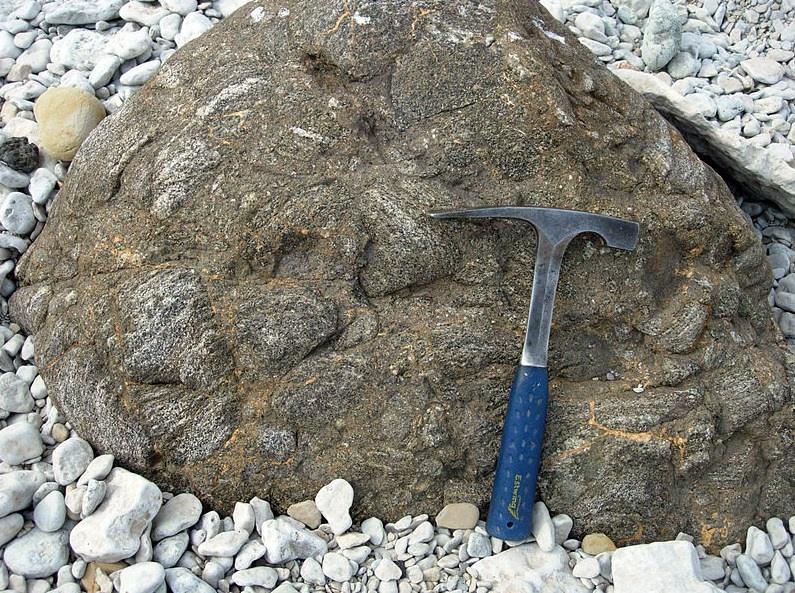 It has been suggested that the crater Neigrund was created during the Ordovician meteor event, when a hypothetical large asteroid went directly into a resonant orbit with Jupiter, which shifted its orbit to intercept the Earth. This appealing theory may have to be changed because a more recent study shows the age of the impact in the Cambrian.

The smallest and youngest meteorite crater in Estonia is at Simuna (Orguse Meteoriidikraater) and was formed in 1937. According to eyewitnesses, a celestial body (bolit) that flew in from the east exploded slightly east of Roela (Roela is a small area in the Lääne-Virumaa county of Vinnitsa in northeast Estonia) and fell to earth in fragments. The crater is 8.5 m in diameter and 1.9 m deep. It was only discovered in 1984.