Something frightening, mystical and, at the same time, attractive reeks from the temples in the caves of Ellora. Deep underground, in the semi-darkness, always without sunlight, there are 34 temples carved directly into the basalt cliffs. Two kilometers of underground halls.

One cannot help but wonder: what divine, supernatural, alien power ─ could create this? If the argument about the Egyptian pyramids continues, you have to wonder: could a man who lived at an age when the most advanced tools were hammers and woodcutters have created this? Yes, he could. And one of the anonymous builders, in a burst of the greatest admiration for the fruits of his labor scrawled on the wall of the cave: “Oh, Shiva the Great, how did I manage to build this miracle without sorcery?” Is this not evidence that temples are the work of human hands?

What are the caves of Ellora?

From east to west the mountain, in which the caves are carved, is crossed by 4 rivers. The largest is the Elaganga, which forms a waterfall between the caves, a violent stream of water that rises from a great height during the rains and is perceived as a natural force combined with a divine force.

The earliest halls, there are 12 of them, are Buddhist halls. There are numerous sculptures of Buddha in various poses, all facing east ─ facing the rising sun. Some of the temples are clearly unfinished, while others ─ on the contrary ─ are carved at the level of three floors and are densely filled with sculptures.

The steps of a narrow staircase lead down 20 meters. This is where the main Buddhist temple of Tin Thal is located. Its facade is austere and ascetic: narrow high gates, three rows of square columns that rest on basalt platforms and go up 16 meters. 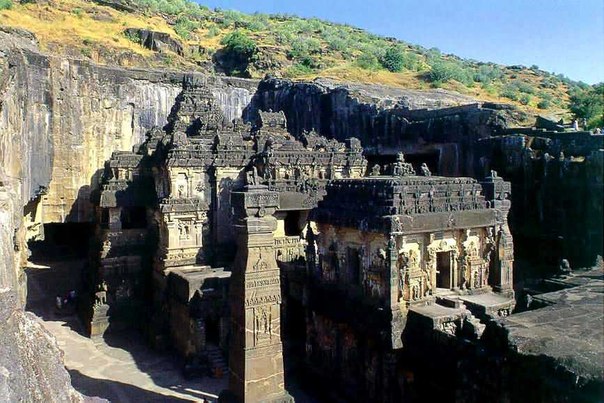 The main temple of Ellora is Tin Thal.

Behind this gate there is a platform and a steep staircase that goes down 30 meters. There, before one’s gaze, one sees spacious rooms, also framed by square columns, as powerful as those on the facade. In the thick dusky air huge basalt sculptures of numerous Buddhist deities shine dimly and ghostly.

The rest of the temples in this part of the caves also leave an indelible impression.

For instance, the temple of Rameshwar. 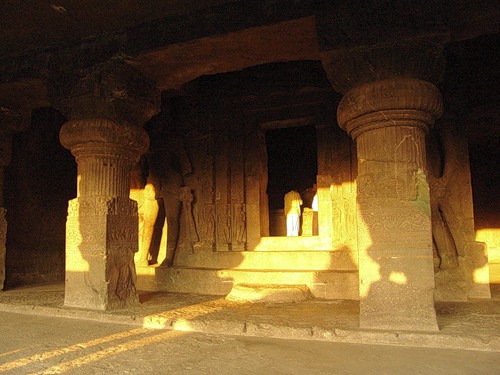 Its facades are decorated with four columns with large female caryatids. All the stone carvings on the facade seem to be human hands, frozen in terrible tension.

In the temple itself there are huge high reliefs ─ fantastic sculptures. They encircle the person entering from all sides, causing an inexplicable feeling of fear. The ancient sculptor managed to convey the plasticity of movement accurately and capture the smallest play of light and shadow.

One gets the impression that all this lives its own life, hidden from the eyes of visitors, and only now, at his appearance, froze the animals, gods and people depicted on the walls.

These caves were carved differently from the Buddhist ones: from top to bottom, and the work was done in several stages. There are 17 of them, and they surround the Kailash temple .

Kailasanatha ─ the jewel of Ellora 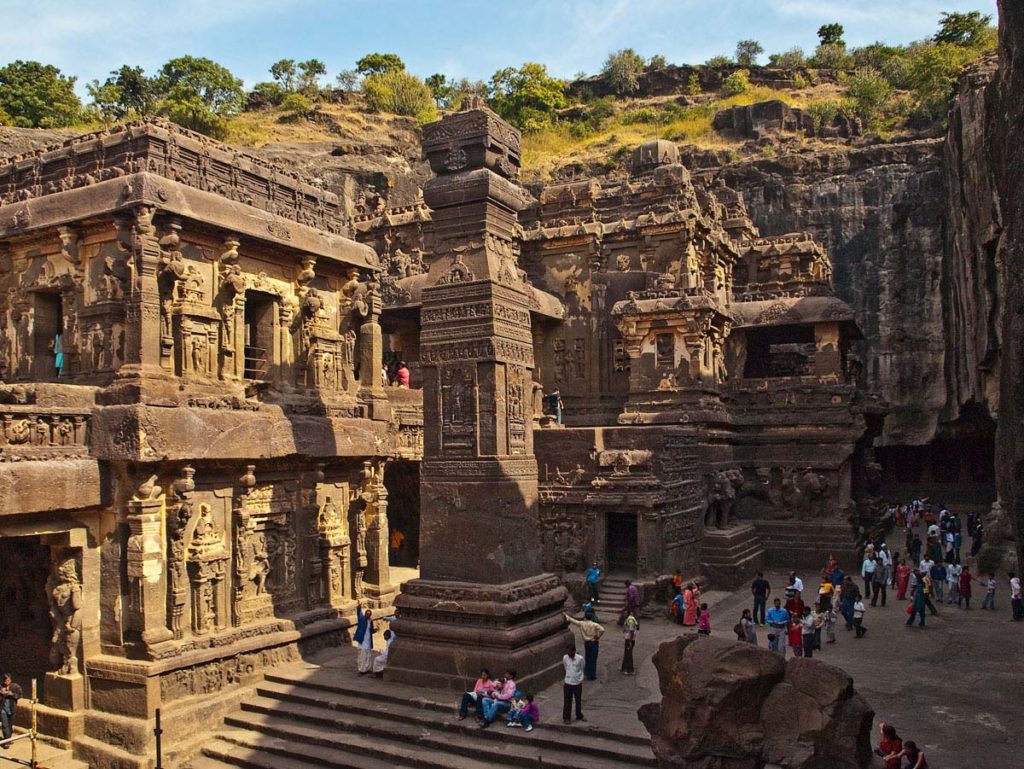 The temple of Kailasanatha (Kailash) is dedicated to the god Shiva. This is the most incredible structure on earth. Everything here is amazing. And everything at first glance inexplicable. The building was carved into the rock, and suddenly appeared on the surface of the hill. And yet its base stands in a hundred-meter well.

READ
The 10 most beautiful beaches of Palermo, Italy

Seven thousand builders over a century and a half have cut the most grandiose monolithic structure in the world from top to bottom, removing 200 thousand tons of rock. They created it as if they were freeing it from the husk of stone, from all unnecessary and extraneous, opening the light, letting their brainchild come to life; they cut giant holes, which then became galleries and halls, and every detail here had a meaning.

It is especially beautiful in the evening when the temple is illuminated by the last rays of the sun.

Kailasanatha ─ symbol of Mount Kailash in Tibet, where according to legend the god Shiva and his wife Parvati reside. The temple once stood white and was covered with a thick layer of plaster, the rare traces of which are still visible today. The white temple looked as if it had been covered by snow, like a sacred mountain in Tibet, as intended by its creators. 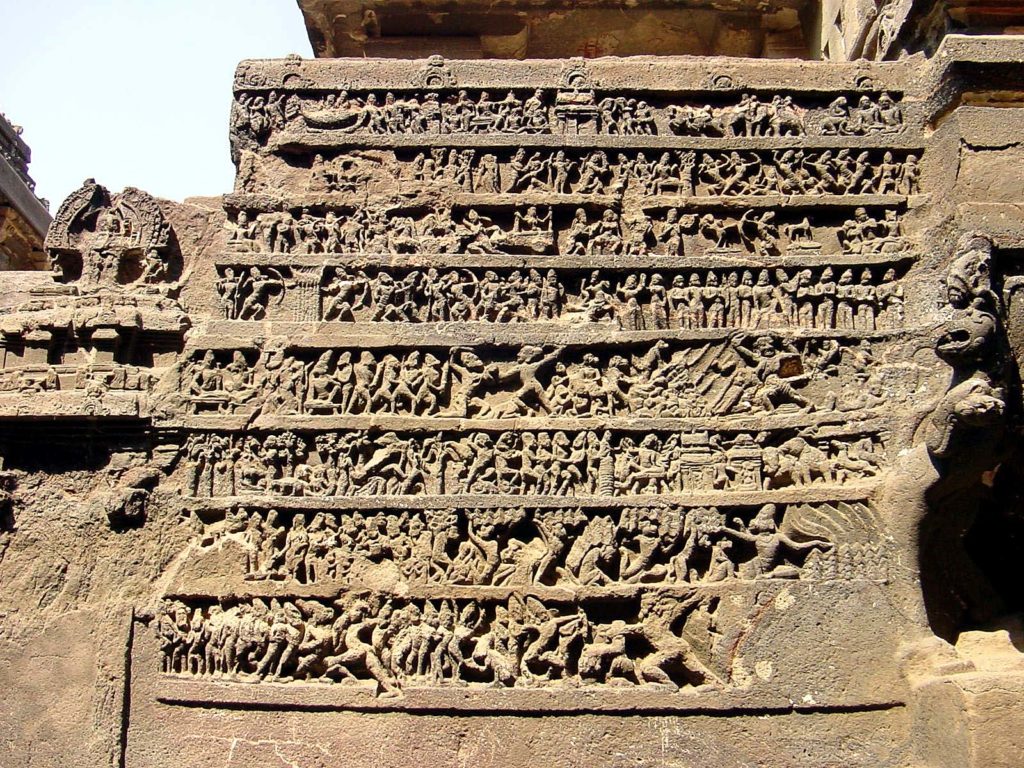 The temple rises up more than 30 meters and is covered with the most bizarre carvings. It resembles a giant chariot carried by elephants whose figures are carved all around its perimeter. They are frozen for hundreds of centuries in the inner courtyard of the temple and hold it up, as if reconstructing the people of that era’s idea of the structure of the universe.

The 29-meter tower of the main sanctuary rises above the complex, pointing upward toward the sky, full of grandeur. 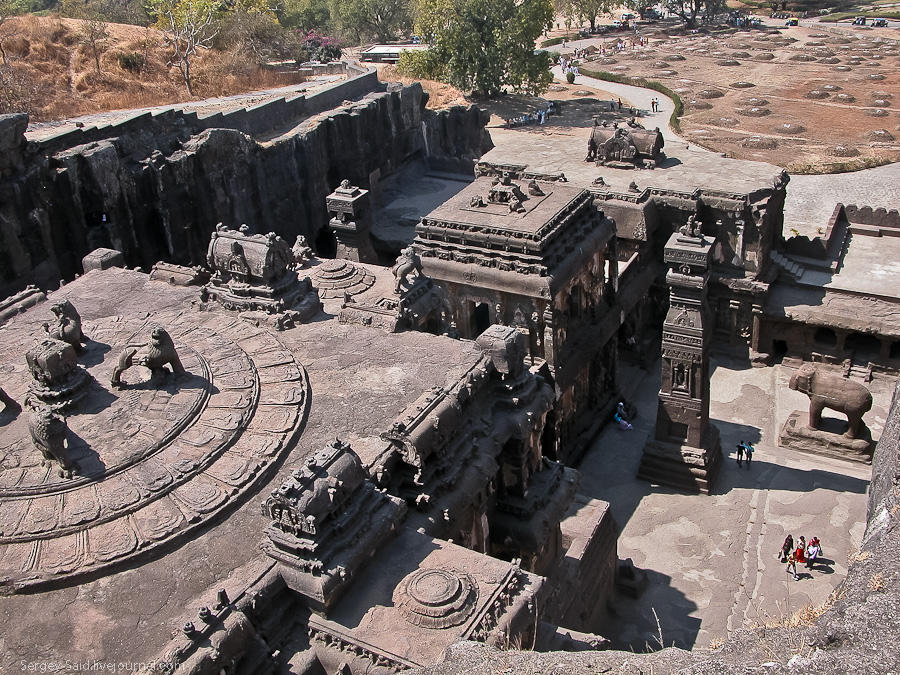 Inside the temple are countless sculptures of Shiva. This god is always in constant motion: playing dice, participating in ceremonies, taming the demon Ravana. And the demon is also moving, rocking the sacred mountain, raging in rage. Shiva himself and everything around him is dancing and soaring, energy is surging over the edge, no one is sitting still. 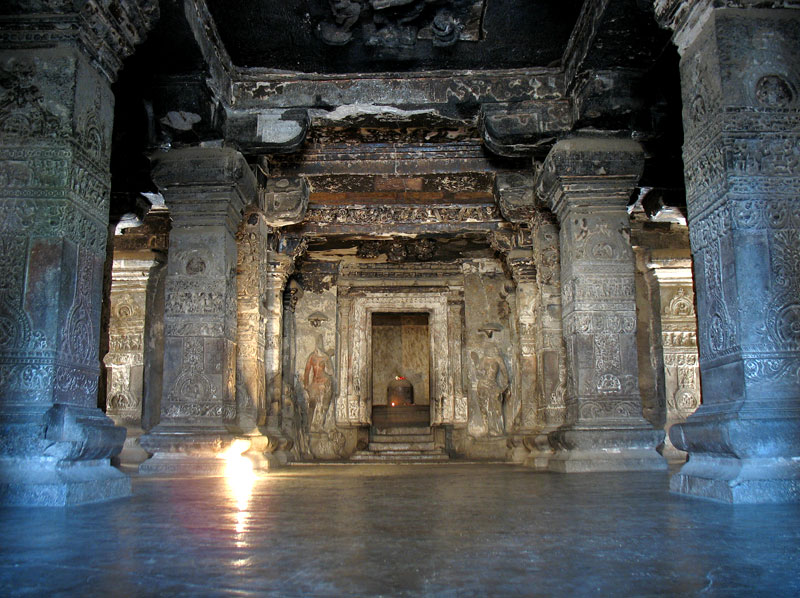 With its energy Shivaism is very much in tune with the modern world, where man is also surrounded by speed, power, drive. Many depictions of Shiva are filled with eroticism, but done so subtly that it is perceived as a natural and integral part of his divine essence, and for many centuries this has not embarrassed even the monks. Everything looks spiritual and divine.

READ
Holidays at sea in India

There is a Hall of Sacrifice in the south wall, and it is always dark, gloomy, and frightening. And you have to shine a flashlight to see anything. The mistresses of the Hall are three bloodthirsty goddesses: Chamunda, Kali and Durga. For the impressionable, a visit to their abode ─ is a real ordeal.

Of the 34 caves of Ellora, 12 in the south are Buddhist, 17 are built by the Hindu Gods, and the 5 caves to the north are Jain.

The Jain caves are the youngest, three of them have interesting carvings and elaborate bas-reliefs of Mahavir, the founder of Jain philosophy, giant lotuses and menacing lions.

They are dug apart, two kilometers from the main complex. The traditions and philosophy of Jainism prevail here. All strict and even ascetic, there is no riot of architectural detail and splendor reliefs and high reliefs. 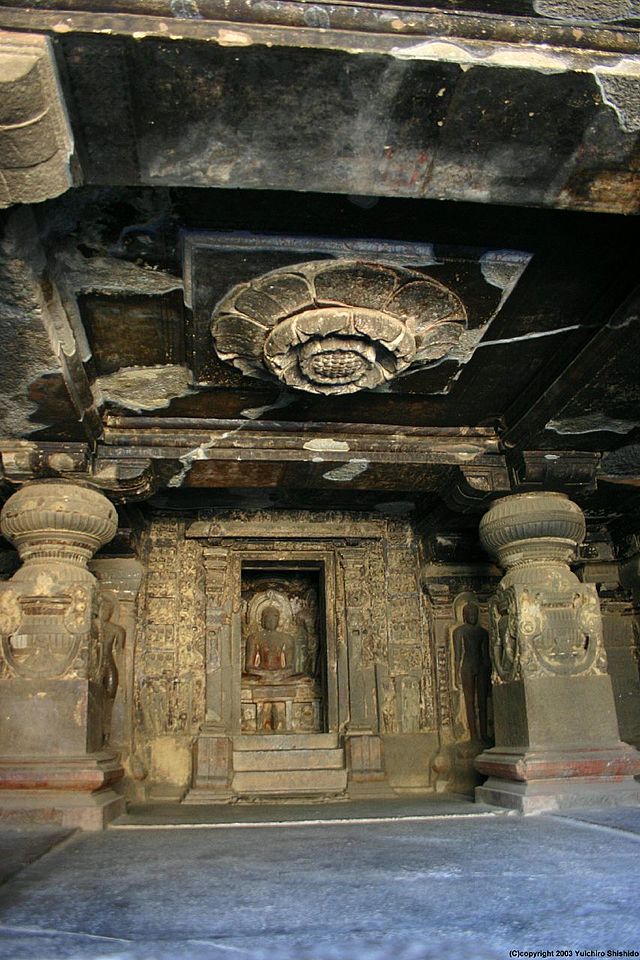 Some time ago, the ceilings of the temples were covered with paintings that have partially survived and are of great interest to art historians and tourists alike.

In size, these temples are much smaller than the Buddhist and Hindu temples.

Almost all the caves in Ellora are ─ monasteries.

History of the complex

The grandiose construction began around the year 500 and was completed almost 150 years later. Some structures were completed as early as the 9th century. And in 600 the first Hindu temple was ready.

Buddhist caves, or as they are called, the caves Vishvakarma, built the first in the complex. They were built from 500 to 750 years. Time passed, rulers and religious preferences changed, and construction was still going on near the village of Ellora. And the direction of the underground temples changed over the centuries: first Buddhist, then Hindu, then the time came and Jain monasteries.

Kailasantha was created by order of Raja Krishna of the Rashtrakut dynasty in the 13th century. The Arabs who lived in those days claimed that the Rashtrakut empire was only comparable in power and wealth with the Byzantine Empire and the Arab Caliphate. This can also be seen in the scale of the construction at Ellori.

It is believed that architects from the Pallava kingdom were invited to design and supervise the construction work.

From the images carved on the walls of the temple, you can study Indian mythology and Indian history: a huge number of events are reflected in the sculptures and bas-reliefs.

Another temple complex in India that is worth visiting is the Ajanta Caves.

Auroville is a sightseeing city, a galaxy city, a utopia city on the right coast of India. What makes it so attractive?

The Ellora complex is a UNESCO World Heritage Site .

The maintenance and restoration of the complex is funded by the Government of India and by international organizations. The complex is well preserved because basalt is a rather hard material. Even the wars could not cause it any serious damage.

In December the festival of music and dance is held in Ellora. Thousands of tourists come to see this interesting spectacle.

Going to explore the caves, do not forget to take a flashlight. In many places without it you simply can not see anything.

And one more thing: when you come to Ellora, remember that for you the caves ─ a tourist site, but for hundreds of Indians ─ a temple, a sacred place where they have come to worship their Gods. The caves ─ are a model of respect for other religions, and this should be a lesson to all of us people of the 21st century.

How to get to Ellora

If you make it to India, be sure to visit Ellora.

This can be done as part of tour groups from GOA resorts.

Or buy a train tour Delhi – Agra – Udaipur – Aurangabad – Mumbai . In this tour, a day is allotted to see the Ellora Caves. Reviews about the comfort on the train and the service are positive.

Mumbai ─ the closest international airport. There are no flights from Moscow and St. Petersburg. But you can choose a convenient connecting flight on Arabian lines or on the lines of the former Soviet republics.

There is also another option. Fly to Delhi, and then take a train to Aurangabad.

In Ellora is always open for tourists hotel Kailas, it is located just opposite the caves.

The craftsmen who built the temples in Ellora, worked in such a way that the spectator barely going down into the caves, ceases to be a bystander, at this moment he is seized by the drama of the depicted events, he is carried away by the characters, masterfully carved in the rocks. Only here, in Ellora, do the artistic images of Indian art affect man in a similar way.