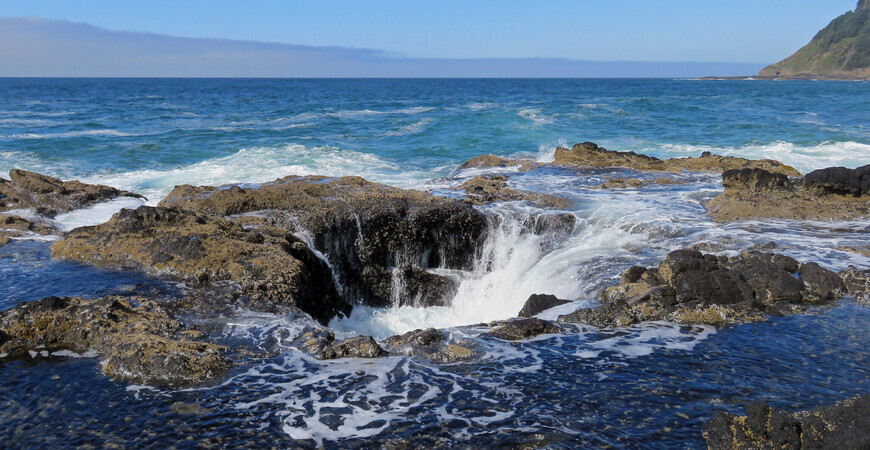 Around the world you can find a lot of natural attractions, which are considered portals to other dimensions. Thor’s Well, located on the Cape Perpetua Plateau in Oregon, is one of them. It is also known as the “gateway to the underworld,” the “gates of hell,” and the “drainpipe of the Pacific Ocean” among nearby residents.

Thor’s Well is a stone funnel formed on the coast of the Pacific Ocean. During high tides, low tides and storms, the hole turns into a bubbling fountain and looks especially spectacular. Bouncing out of the depths like a geyser, salt water jumps up to a height of 6-7 meters. The splashing water is 8 to 10 meters away.

Getting too close to the funnel during the “water show” is life threatening. The wind and waves can cause you to lose your balance and fall. For safety reasons, tourists are asked to stay within the specially equipped viewing platform.

Due to the strong undercurrent, the well has never been explored. Therefore, there is no reliable data on its size. It is only known that the diameter of the hole does not exceed 5 m. But it is impossible to mark the depth without diving. Some scientists have suggested that the crater does not have a bottom at all, as it is part of an underground cave system. This version is confirmed by the fact that no one has ever seen Thor’s Well in the United States filled with water to the top.

The sinkhole is insanely popular among professional photographers specializing in nature photography. Some of them are even willing to risk their lives for a good shot. Lucky is the one who managed to capture the well of Thor in the U.S. at close range against the background of the sunset. Oregon has long been nicknamed “the state of magnificent sunsets”. Combined with natural locations, the moment of sunset looks even more evocative. It is at the end of the day that the well resembles a mysterious gateway to another world.

Like most other such natural locations, Thor’s Well in Oregon is laden with many legends. The most popular one says that in ancient times two lovers met at the site of the sinkhole. The idyll in their relationship ended at the moment when the girl became jealous of her chosen one (what provoked this unpleasant feeling, history is silent). And no matter how many times the young man swore fidelity to her, she did not calm down. Eventually, jealousy got so deep in her heart that she killed her beloved. Witnessing the crime was the mighty Thor. Furious, the lord of thunder turned the boy’s blood into a red-hot lava, which immediately burned a deep hole in the stones and carried the body to the underworld. Many centuries have passed since then, but the well still exists today. Some say that it reminds people of the pernicious effects of jealousy. And others consider the well a symbol of passionate love.

One of the scientific justifications for the origin of the hole at Cape Perpetua also includes volcanic lava. Most scientists believe that the well was formed many thousands of years ago as a result of a powerful eruption of one of the volcanoes. For example, it could be the volcano St. Helens, located near the coast. Another possibility is that there was once a cave at the site of the sinkhole, the roof of which collapsed as a result of erosion.

How to get to Thor’s Well

Thor’s Well is located at Cape Perpetua on the west coast of Oregon. On the map, look for the landmark between the towns of Waldport and Florence.

The easiest way to get to the well is by car. You need to take Highway 101 (Pacific Coast Hwy), which runs along the Oregon Coast, and drive in the direction of the Cape.

You can park near the Cape Perpetua Visitor Center. Staff at the center will tell you how to find Thor’s Well and other local attractions, and be sure to emphasize safety precautions.

Some tourists also take cabs to get there. To hail a car from Waldport and Florence, you can use the Uber app.

It is fair to say that not only the area around the sinkhole, but also the cape itself has a reputation as a dangerous place. The rocky shore, rugged by waves, is uneven and quite slippery in places. To avoid unpleasant incidents, it is extremely important to wear waterproof shoes with a stable and non-slip sole.

Thor’s Well – no one knows what’s at the bottom

Thor’s Well is a mysterious natural landmark in Oregon, USA. What ever it is not called, and the way to the unknown, and the gateway to the underworld. Although in fact it is an inconspicuous depression no more than 5 meters in diameter in the surface of Cape Perpetua. 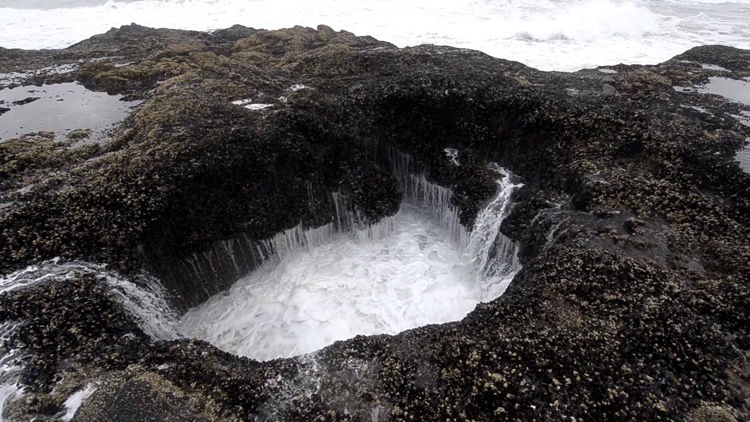 Basically, it is an ordinary rocky shore, washed by the waters of the Pacific Ocean. But here an hour before high tide begins a spectacular show that has been broadcast for thousands, maybe millions, of years.

The most authentic fountain appears in Thor’s Well during the storm, the tide, and the tide. The water rushes deep into the funnel with a roar and noise, then splashes out in millions. Up to six meters high, the water rumbles down the well again. Sometimes, foaming and grudgingly rumbling, it simply flows into the bottomless pit, dissolving into its infinity. 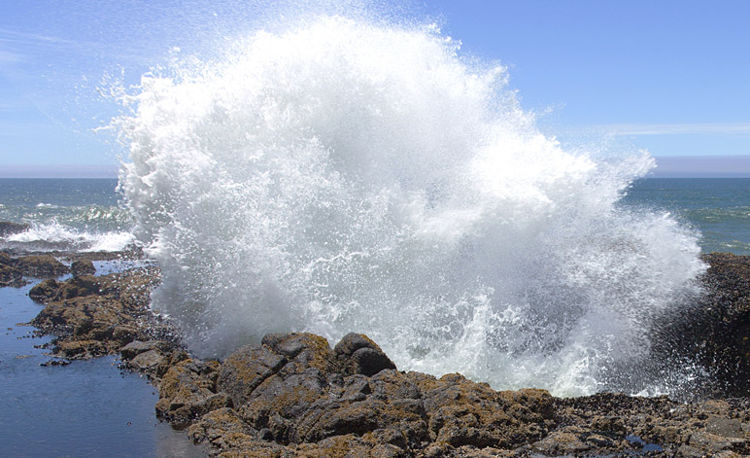 The scenario is always different, it all depends on the mood of the ocean. It can be a roaring stream of water that fills the well or on the contrary flying out of it. Or cascades of fountains, splashing 10 meters around. In any case, the performance is worth seeing.

READ
Gran Vía is the main street of Madrid

During the natural spectacle, there is always a feeling of some kind of devilry. It is as if this is not just an ordinary natural landscape, but something magical and unknowable. It is a gateway to the unknown.

Where is the Well of Thor

The mystery of Thor’s Well

No one has yet found out “whether the rabbit hole is deep” both literally and figuratively. The mysterious well still carefully keeps its secrets. Neither scientists nor divers know to this day what is there at the bottom, and whether it exists.

The water, so frantically filling this pit, disappears without a trace. It is impossible to fill Thor’s well. Scientists suggest that it has a large number of branches, caves and grottos, through which the water seems to dissolve into the coast. 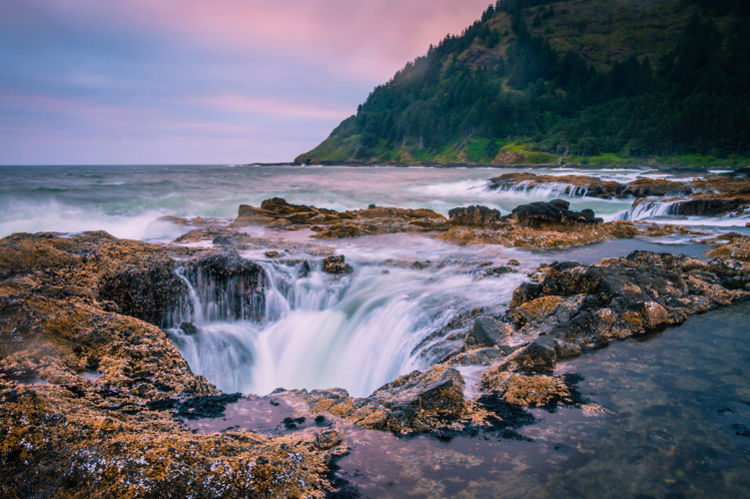 Thor’s Well – the gateway to the underworld

The official science believes that such a creation has arisen as a result of volcanic activity. Both Thor’s Well and the entire coast in these parts are formed by frozen lava flows, once erupted by local volcanoes. Nearby, the St. Helens Volcano, officially recognized as active, even survives.

Thor’s Well is not the only “well” in the world. Nature has provided us with a surprising number of such interesting sights. For example, Jacob’s Well is quite noteworthy. In addition, it is even possible to dive into it, unlike the Well of Thor.

Some sources indicate that the well of Thor is several meters deep. But it is only the depth to the water. What is further down there, no one knows. At the moment, no one took the risk of diving into the well. After all, no one guarantees a safe outcome of the experiment. 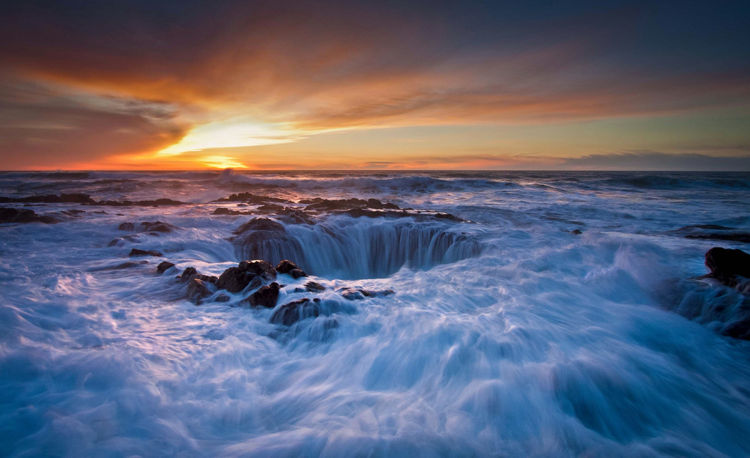 The Legend of Thor’s Well

It is not known who gave such a name to this funnel. They say that the well owes its name to a tragic legend.

In ancient times a beautiful (as legends say) girl and a handsome young man met on this shore. They fell in love with each other. They often met on this spot and thought that no one would ever destroy their feelings. But disaster struck. Here is where the legend does not specify exactly what happened. It is mentioned that the girl, in a fit of jealousy, kills her lover.

What happens next is not entirely clear. Thor, the god of storm and thunder, sees this outrage. But instead of punishing the murderer, as legends often do, he turns the boy’s blood into a red-hot lava which scorches the earth and drags the boy’s body into the abyss of obscurity. Since then, the funnel has been called Thor’s Well, and it is believed to be a symbol of the young man’s fiery love. 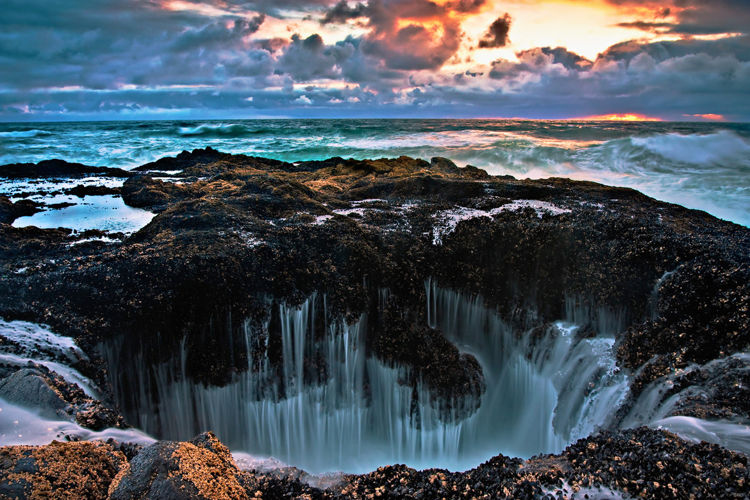 There is an information center and observation deck nearby that offers a great view of the state’s Pacific coastline.

To make sure no one gets dragged into that very abyss of obscurity, tourists are always warned about the dangers of approaching Thor’s Well, especially during high tides, low tides, and storms. But not everyone heeds it. Photographers like flies on … like bees on honey, fly here to capture the wildness of the elements in a small space. 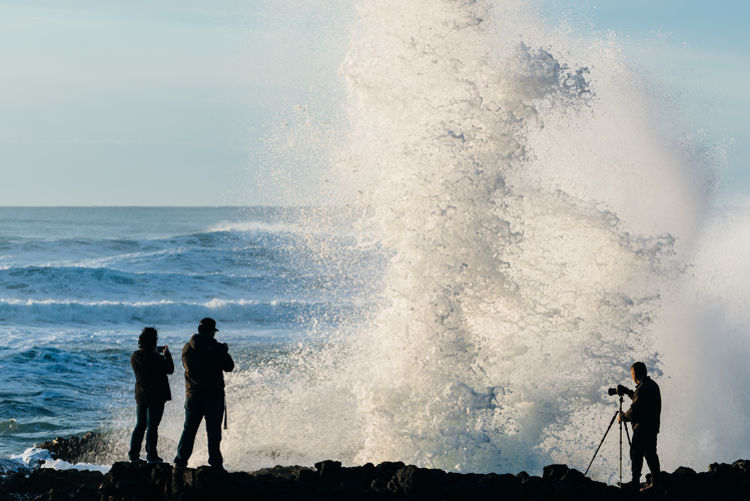 Some intrepid tourists try to peer into the eyes of the unknown, making their way to the very edge of the well. To do this is not recommended, because the surface of the stones is always wet, and the probability of banal and ignominious fall inside is quite high. Of course, in this case you can find out what is at the bottom. But to inform the world about it is unlikely. Watch the fairy show of Thor’s Well during the tide or storm. But to get closer is better long before the tide or some time after it. Be sure to remember the dangers. Be sensible and careful, then visit the Well of Thor will leave only positive emotions. 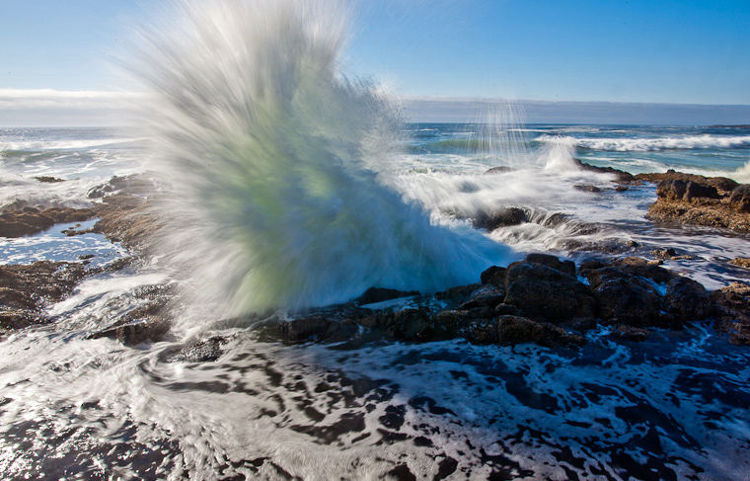 To better understand what is the Well of Thor will help you this short video.