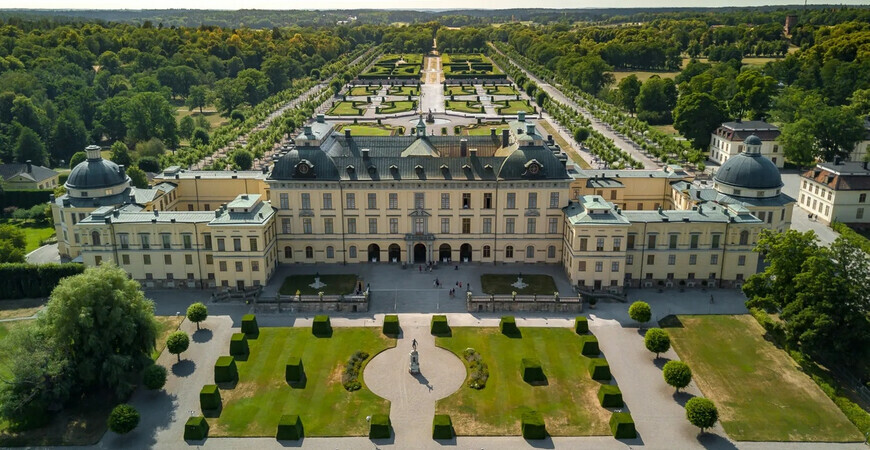 The complex is located on an island in the middle of a beautiful lake. The building is surrounded by a vast park with century-old trees, fountains and sculptures. Drottningholm Palace is also famous for its luxurious interiors of the 17th-19th centuries and its own theater, which is one of the oldest working theaters in Europe.

Since 1981 Drottningholm is the royal residence.

The idea of building the palace belonged to King Johan III of Sweden, who conceived it for his wife Katharina Jagiellonka. The first sample building, built in 1661, burned in a fire and was irretrievably lost. The next ruler, Hedviga Eleonora, commissioned the construction of a new palace building to Nicodemus Tessin senior – a famous architect of the era. His work resulted not only in the building we see today, but also created in it the first early Baroque interiors in Sweden, they have also survived to this day.

Around the palace was laid out a large-scale park, most of which has also survived to this day in its original form.

Twenty years later, after the death of the architect in 1682, the final phase of construction of Drottningholm Palace was headed by his son Nikodemus Tessin Jr.

A unique feature of the palace is the presence of several facades: from both land (from the park side) and water, it looks grand and has entrances and entrances. For tourists there is currently available the entrance through the park, and from the lake you can admire the no less beautiful facade of the building, standing on the bridge or sailing on the boat.

In 1744 the palace was presented to the Princess of Prussia as a wedding gift to the heir to the Swedish throne. At that time the court theater was opened and many halls were equipped and decorated.

In 1777 Drottningholm was sold to the city. At that time it was the seat of Gustav III, who contributed a lot to the interior appearance of the building and left behind a large collection of Baroque statues. Today, there is a separate gallery for them.

The 19th century was not the best time in the history of the building: for almost 100 years, it was in decay. In 1907, it was decided to restore the palace, gradually the palace began to revive, and as a consequence, the royal family began to stay in it.

Since 1981, Drottningholm Palace is the residence of the royal family, which has settled in the southern quarters of the building. The rest of the building is accessible to tourists.

The halls of Drottningholm Palace

The main pride of Drottningholm is in the preserved interiors and halls, which are available to visit. You can take an organized tour or use an audio guide. Both will tell you a lot of useful information about each room of the palace.

Visitors are greeted by a grand staircase decorated with marble sculptures. It leads to the chambers of Queen Eleanor, who was responsible for laying and constructing the new palace. In the same part of the building is the Parade Hall, which was for a long time used for royal receptions and balls. All the rooms are made in the style of early Baroque and richly decorated with stucco and gilding, which in combination with carved furniture and paintings by famous artists of those years looks especially elegant and solemn. And the Royal Library, in addition to rich decorations, has preserved many rare and unique books of the XVI-XIX centuries.

Equally interesting is the gallery of Gustav III, where the monarch collected a rich collection of statues from Italy and other countries in the Baroque style.

Visitors are also attracted by the palace chapel . There is an antique organ and a tapestry made personally by King Gustav V. The chapel is still functional, and on Sundays masses are held there. It has a capacity of 160 seats.

Outside the palace building there are also many interesting things. For example the Chinese pavilion , which is a valuable example of the Chinese style. In the mid-18th century European aristocracy was very fond of the Chinese style in the interiors, paintings and everyday life. The pavilion was a gift from King Adolf Frederick, then reigning, to his wife, Queen Lovisa Ulrika, who was very fond of this fashionable style. Today the Chinese Pavilion is recognized as a valuable specimen of architecture and – most of all – of interior decoration; it contains many everyday objects and works of art in the Oriental style that were fashionable at the time.

One of the most important and famous buildings on Drottningholm’s grounds is the Court Theater, built in 1766. In it are still preserved mechanisms of that era, typical of theaters in Italy, where they were brought from. They are the first mechanisms of their kind that create the action in performances – moving the scenery during performances, imitating the sounds of nature. The theater is active and still hosts performances, for which reason it bears the proud title of one of the oldest working theaters in Europe. As well as 200 years ago, operas are staged there.

The cost of a ticket to Drottningholm Royal Palace is for a full day’s stay in the grounds and depends on the age of the visitor and the season.

READ
The 10 best places to have an aperitif in Naples, Italy

Prices are subject to change. Learn current information before the visit and buy tickets online on the official website of Drottningholm Palace in Stockholm.

Also in Stockholm operates a card Stockholm Pass, which provides a single entrance to many attractions of the Swedish capital and acts as a travel document. Its owners free entrance to the territory of the palace Drottningholm – he is one of the sites where it operates. Find out more information and buy the card, which will save you a lot of money, here or at the link below.