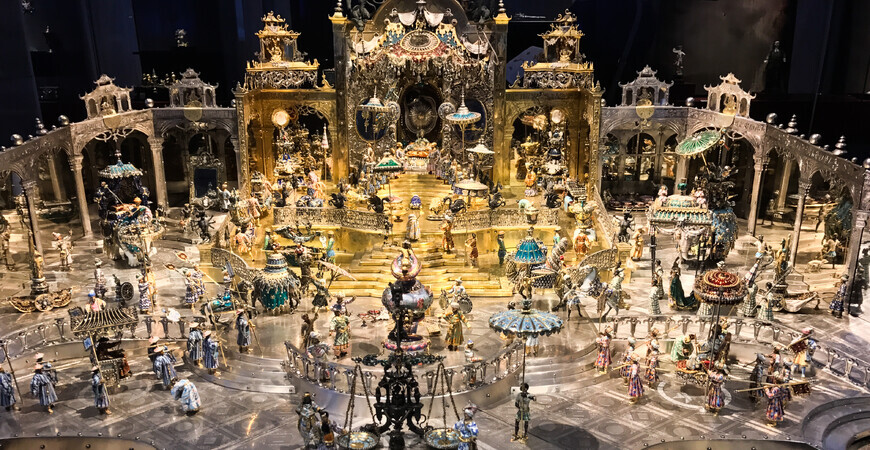 “The Green Vaults in Dresden (Grünes Gewölbe) is a museum collection of jewels, one of the most famous and richest treasuries in the world. The museum is located in the historic center of Dresden in eastern Germany.

The core of the museum’s collection, which includes works from the Renaissance to the Classical period, consists of treasures from the dukes, princes and kings of the Saxon Wettin dynasty.

Literally translated from the German “Grünes Gewölbe” means “Green Vault”. The peculiar name of the museum comes from the color of the columns in the first room where the collection was housed. The columns in the vaulted room of the first floor of the Wettin Palace-Residence were painted malachite.

“The Green Vaults is one of the oldest museums in the world. As early as 1547 Duke Moritz, who was made Grand Dukes at the time, added four massive rooms with vaulted ceilings to his palace, designed to store jewels and documents, the so-called Secret Vault.

In the 18th century the Saxon Grand Duke and King Augustus the Strong of Poland enlarges the vault to nine rooms and allows the general public to view the treasures. Matthäus Pöppelmann, the architect who also designed Dresden’s Zwinger Palace, was in charge of the construction.

The museum remains unchanged until the twentieth century. In the bombing of Dresden on February 13, 1945, three of the nine rooms of the Green Vaults were destroyed. Fortunately, the artworks evacuated by that time were not damaged.

At the end of World War II, the museum’s collection was taken to the Soviet Union as a trophy, but was returned to the GDR in 1958. Until 2004 the museum collection was housed in the Albertinum in Dresden.

Following an extensive 45 million Euro restoration, the Historic Green Vaults were ceremonially reopened on September 1, 2006 in their old location.

Today the Green Vaults hold over 4,000 exhibits, most of them masterpieces, the only ones in Europe and in the world.

Entrance to the Green Vaults Museum on Google Panorama

The historic Green Vaults, as the name already suggests, are located in the restored original interiors on the first floor of the palace. The columns, however, are no longer painted malachite, but are now covered with mirrors.

The permanent exhibition of the museum consists of more than 3,000 masterpieces of gems and jewelry art. The Historische Grüne Gewölbe currently consists of ten rooms.

The first room of the Historische Grüne Gewölbe displays works of art from the Middle Ages and early Renaissance. The most significant exhibits are the chalices of Ivan the Terrible and Martin Luther and the Martin Luther printing ring.

The second room of the exhibition is the Amber Cabinet, which displays works of art made of amber – vessels, caskets, figurines, cutlery, made in Koenigsberg and Danzig.

The sixth room with the corner study is the largest of all the rooms, it is the so-called Preziosi Room, the Hall of Jewels. The seventh room, the Armorial Room, is dedicated to astronomical clocks.

The most famous of these is “The Moor with the Emerald Stuf,” a sculpture made of pear wood in 1724, 64 cm high, with emeralds, rubies, sapphires and other precious stones.

READ
The most beautiful villages of Lake Garda, Italy

“The Obelisk of Augustus,” another famous work of the museum, depicts Augustus the Strong, and 240 worked stones and sculptures covered in gold were used for the obelisk. Its value may equate to that of a palace.

On the museum’s official website, you can take a virtual tour of the halls of the Historic Green Vaults.

The New Green Vaults exhibition is located on 2,000 square meters of the second floor of the palace. There are 1100 items of jewelry art.

There are 12 rooms in the exhibition halls of the New Green Vaults.

The Hall of Art includes works from the second half of the 16th century.

The second room is the Cabinet of Miniatures. The most famous exhibit in the hall is a cherry bone, on which 185 images of faces are inscribed.

The third room is the Crystal Cabinet, which contains works of crystal, Venetian glass, and stained glass.

The first Electors’ Room presents works of art from the first half of the 17th century. The ivory bowl “Neptune Carrying the Great Frigate” is a particular pride of the museum.

The second room of the Electors’ Chamber gives an insight into the jewellery art of the second half of the 17th century. The hall of the royal jewels contains applied works of art used at court – table clocks, haberdashery, statuettes, etc.

The Dinglinger Hall is devoted to the works of the famous court jeweler.

On display here is the so-called “Diana’s Bath”, a chalcedony bowl in a gold frame with a sculptural depiction of the Roman goddess. The bowl is decorated with pearls, diamonds, and silver ornaments.

Another Dinglinger masterpiece is the gold coffee service. Gold, silver, ivory, and 5,600 diamonds were used to make it.

The sculptural composition “Delhi Palace Reception on the Birthday of the Great Mughal Aurangzeb”, made of gold, over 5,000 diamonds, as well as rubies, emeralds, a large sapphire and pearls, is particularly exquisite.

The Enamel Cabinet exhibits enamel miniatures as well as paintings.

Of particular interest to visitors to the Green Vaults is the Diamond Cabinet. Among the masterpieces in this room are one of the largest diamonds in the world, the Dresden Green Diamond at 41 carats, included in a precious pendant, the White Saxon Diamond at 48 carats, as well as the only sapphire in the world at 648 carats, a gift from Peter the Great.