Don Mueang Airport is the second airport in Bangkok serving flights of budget airlines. Unlike Suvarnabhumi, you can fly cheaply from here to many parts of Thailand and neighboring Asian countries. There is a free shuttle between the airports.

Don Mueang is not the correct pronunciation of the airport’s name. In fact, in Thai it sounds like Don Mueang, without all the “g’s” and “u’s”. This is very important to know, because all cab drivers, tuk-tuk and motorcycle drivers, and all other Thais understand only the correct pronunciation. If you ask for a ride to the airport Don Muang, they will make round eyes and say that such in Bangkok does not exist. Not only will you mispronounce two letters, but you will also say it with a Russian accent.

Don Muang Airport on the map of Bangkok

In the beginning of 20th century the Thai Air Force conducted military flights from here. In 1911, three air force pilots were sent to France for training. After graduating and returning home, four Breguets and four Nieuports were purchased, which formed the basis of the country’s air army. On March 27, 1914, the opening of the airport was officially announced. The first civilian flight was operated in 1924 from Holland by Koninklijke Luchtvaart Maatschappij (KLM). During World War II it was used by the Japanese as a military base (Thailand was an ally of Japan) and in the Vietnam War by the U.S. Air Force. 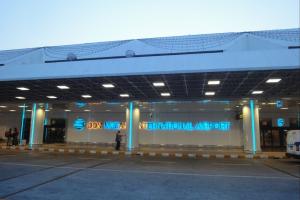 At the beginning of the 21st century, the airport was one of the busiest in Asia and could not cope with air traffic. Passenger traffic was 38 million a year, it handled 160,000 flights annually and worked with 80 airlines. Therefore, a new international airport, Suvarnabhumi, was opened in 2006 and is now the main airport in Thailand. On the night of September 27 to 28, 2006 the last flights were operated from here: to Kuwait and Chiang Mai. After that it was closed and became a military base again.

But after a while it became clear that the decision was hasty and Suvarnabhumi is not yet able to serve all international and domestic flights. As a result, on March 25, 2007 Don Mueang was reopened officially for some domestic flights. It is still partially owned by the Thai Air Force.

In the fall of 2011 there was severe flooding in Bangkok and the airport was flooded in some places (the runway was knee-deep in water). Its activity was suspended and resumed only on March 6, 2012.

By this time it was finally clear that Suvarnabhumi is not able to serve both international and domestic flights simultaneously. It was designed to carry 45 million people a year, but in 2012 that figure was already over 50 million. On March 16, 2012, the Thai government invited 10 charter and non-bulk carriers to move to Don Muang. Nok Air and Orient Thai Airlines followed, and on October 1, 2012, one of the largest airlines, Air Asia, moved its operations completely out of Suvarnabhumi.

Below is a schematic diagram of the airport. 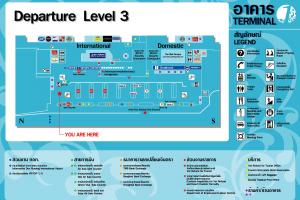 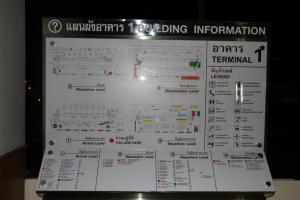 Don Muang has three terminals. Until 2006, when it was the only one in Bangkok, Terminals 1 and 2 were used for international flights and Terminal 3 for domestic flights. Currently, only Terminal 1 is operational. But by 2015, it is planned to reconnect Terminal 2. There are two runways, served by 60 planes per hour.

Terminal 1 has four floors plus an underground parking lot. But actually there are only three, as the second one is a pass-through, where the airport management and several offices, which are not of interest, are located.

Arrivals area, both local and international flights from some Asian countries. A lot of currency exchange offices of different Thai banks, a couple of companies offering to rent a car or a hotel. Two information desks where you can get absolutely any information in English. At the beginning and at the end there are a couple of cafes offering snacks and drinks (for a solid meal, it is better to go to the 4th floor).

At the exit of the terminal, on the left, there is a cab stand. They are 50 baht more expensive than usual and if you don’t want to overpay, just go out on the highway and catch a regular city cab there. The highway is 50-100 meters from the exit, but behind the fence. So you will have to make a small detour, but the whole way will take 2-3 minutes. In this case, when you exit the airport doors, go right. This road will take you to the highway, on which the city buses and cabs run. If you need to go to downtown Bangkok, take the transport going to the left (if you stand with your back to the terminal). 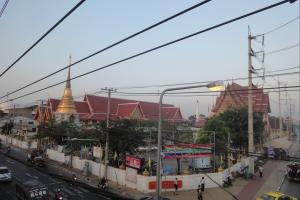 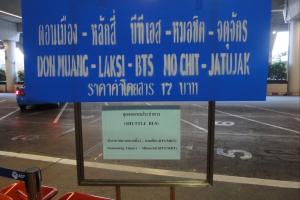 There is also a free shuttle to Suvarnabhumi from the 1st floor and a shuttle to the BTS (to Mo Chit Station). Approximate price is 17 baht.

The departure area, most of its territory is occupied by the passport control and baggage drop-off counters. The rest of the area is occupied by small souvenir stores and a seating area with benches.

If there is a lot of time before your departure you can see the temple, which is located on the other side of the road, about 200 meters from the airport. You can see it as you walk out of the terminal.

Actually not a floor, but a balcony. Most of it is occupied by offices, including those of carriers such as Nok Air and Orient Thai Airlines. To the left and right are cafes and restaurants where you can eat a full meal: The Noodle, Silom Village, Taurus and others. From here there is a great panoramic view of the 3rd floor. 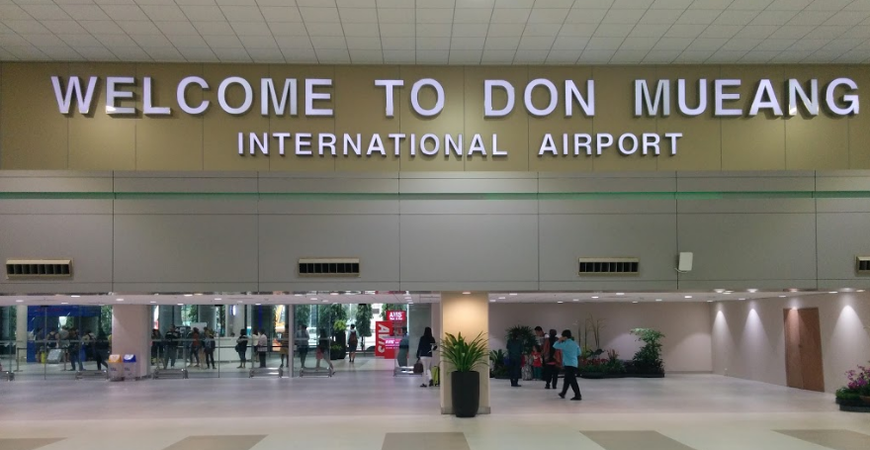 Bangkok’s Don Myang Airport has international status, although most flights from it are domestic. It is an old airport, built in 1914, on the territory of the military air base of the country.

Until 2006, before the opening of the new airport Suvarnabhumi, Don Mueang was the main air port of Thailand and the second largest air traffic in Asia. After the opening of Suvarnabhumi, all flights were moved there, and Don Mueang Airport began serving exclusively military and charter flights. It was not until a year and a half later that it resumed domestic service. The airport has two runways and can handle up to 60 flights per hour.

Detailed flight schedules can be viewed using the online board on the official website of Don Miang Airport. Here you can find the arrival/departure time and flight status. Please note that flight departure and arrival times may differ from those indicated on your ticket.

In addition, a convenient schedule is available on the service Yandex.Schedules. To see the flight schedule for the next days – click on the board.

Search for airline tickets from Bangkok

You can buy tickets to/from Don Miang airport in the airline offices located at the airport, as well as in downtown Bangkok. Also you can buy tickets online – on the websites of airlines, or through websites specializing in the selection and sale of airline tickets. For example, you can use the search form below:

There are 263 check-in counters at Bangkok’s Don Miang International Airport, 220 for international destinations and 43 for domestic destinations. It is advisable to arrive at the airport well in advance, as there may be lines to check in and the time of departure may change. When you arrive at the airport, look for the electronic board in the departure lounge, find your flight number, and ask for the number of the check-in desk where you will receive your boarding pass.

Some airlines offer an online check-in service for their passengers. You should verify the availability of this service with the airline when purchasing tickets. Online check-in as a rule begins one day before departure. To check in simply go to the website or application of the airline and follow the instructions.

Terminal 1 is located on 3 levels (level 2 is closed to passengers). There is an arrivals hall on Level 1 and a departures hall on Level 3. The capacity of the international terminal reaches 19 million passengers a year.

Terminal 2 is divided into 4 levels: level 1 also has the arrival hall, level 2 is for administrative offices, level 3 is the departure hall, and level 4 has stores, restaurants and various services for passengers.

If you need to stay overnight in Bangkok without leaving the Don Miang Airport area, the best option is the Amari Airport Hotel, which is within walking distance of the air port.

However, it is worth noting that rooms in it are not cheap, as it is a luxury hotel. If you are looking for budget accommodation, we recommend you use the link below.

There are lockers at the airport for storing luggage and hand luggage. They are located on Level 1 of Terminal 1 and on Level 4 of Terminal 2. You can check the price of the service at the information desk.

How to get to Bangkok Don Mueang Airport

The distance between Don Miang Airport and downtown Bangkok is about 27 kilometers. You can use a car, public transportation or shuttle service to get there.

By car, it takes about an hour to get from downtown Bangkok to Don Miang. It is recommended to leave in advance, as traffic in the Thai capital is often congested. In addition, the traffic does not have the traffic rules that are familiar to the Russians, and therefore there may be some difficulties.

READ
Discover the best hotels and resorts in the UAE

Passengers transferring to other cities and provinces of Thailand often have a question on how to get from the airport to the railway or bus station. Consider the options.

To the railway station “Hua Lampong” (Hua Lampong Station) from the airport there is a bus number 29 and suburban trains.

The Mo Chit Bus Station can be reached by bus number A1 without a change.

You can take bus number A4 to Sai Tai Mai bus station. Take it to Sanamluang Bus Terminal and change to bus number 124.

How to get from Bangkok to other cities

Thailand is popular for its resorts and most tourists from the capital go to popular Pattaya, Phuket, Krabi and other provinces. Read our tips on how to get from Bangkok to the beaches of Thailand:

The cab stand is located right in front of the airport exit. You can book a car at the information desk at the airport, through the mobile app Grab Taxi, or arrange with the driver directly.

To avoid the hassle of finding a cab when you arrive in Bangkok, we recommend pre-booking a transfer service from KiwiTaxi. The driver will meet you at the exit of the terminal with a nameplate. In addition, the service can be paid in advance, in a convenient currency for you, and do not lose money on the conversion on the spot.

There are several car rental services located in both airport terminals. To find the best option, use the online form provided.