Croatia’s Vis Island is a graveyard for all kinds of warplanes and a gold mine for diving enthusiasts.

Distant memories come back as familiar outlines appear below me. From 40 meters I can already see the distinct wing shape of a B-17 Flying Fortress, the mighty World War II bomber whose model I collected as a child.

Back then I dreamed of becoming a pilot one day, until the sea replaced the air as my all-consuming interest. Rather, these two passions must converge here, in the crystal clear Adriatic Sea. At a depth of 70 meters, we reach the seafloor, where this strikingly intact warrior lies on the sand as if he had just landed, with scant evidence of the violence of his last flight. Moments pass before I break out of my awe-inspiring gaze, reminding myself that I am here to photograph this, and time at this depth is precious. The wingspan is enormous-more than 30 meters-and I can see every wing tip. These very wide, low-lying wings are probably what saved it from disintegration, allowing it to glide across the surface of the water when it was flung into the sea in 1944 after the bombing of Slovenia.

The discovery of this crash by Slovenian divers in 2001 caused much excitement, and it didn’t take long for Croatian historian Daniel Frke to piece together the entire story of this B-17G. On November 6, 1944, the aircraft flew out of Italy for its first combat mission. While attacking a heavily defended railroad junction, co-pilot Ernest Vieno was mortally wounded by anti-aircraft fire; two engines failed. The bomber headed for the nearest friendly base, Vis Island, losing a third engine en route and a fourth while circling the airfield; an experienced landing at sea allowed the crew to escape in lifeboats. The co-pilot got off the plane, where, as far as we know, his remains still rest – a reminder that this is a war grave.

The only serious damage is a crumpled nose, probably from hitting the seabed, parachute material still tangled with torn metal. The upper and rear turrets are intact, complete with plexiglass, now opaque with algae growth. As I swim around the tail, I see the radio operator’s hatch, which once held one of the 13 B-17 machine guns he carried for defense, and was given the title of German Fliegendes Stachelschwein (Flying Porcupine) fighter pilot assigned to shoot down.

Slowly returning forward, I reach for the engines, their propellers completely covered in bright yellow tubular sponge. Before beginning the long ascent to the surface, I take one last look around the cockpit where Vieno lost his life.

Many of the crews of the damaged planes would never have survived World War II without this accessible airfield where they could land their bombers. The drama witnessed by this key strategic location contrasts with the tranquility of this charming little island, whose regular visitors include yacht crews wandering the Dalmatian coast and families looking for a relaxing holiday. Vis is the farthest inhabited island from the Croatian mainland, and it has only two main population centers: the town of Vis, where the ferry docks are located, and on the opposite side of the island, Komija, where most of the dive operators in Vis are located. On the opposite side of the bay is the Manta Dive Center, a family-run business run by Andy Marovich that caters to recreational and technical divers with a state-of-the-art gas mixing station and purpose-built boats.

Not so far from the B-17, another World War II bomber is at a much more accessible 40 meters. This long-range B-24J Liberator, known as the Tulsamerican, was discovered by Darko Boyanich in late 2009 – it was the last Liberator built at the Tulsa, Oklahoma plant, which generated much media interest.

READ
The Nile Valley: The Tropics meets the Desert 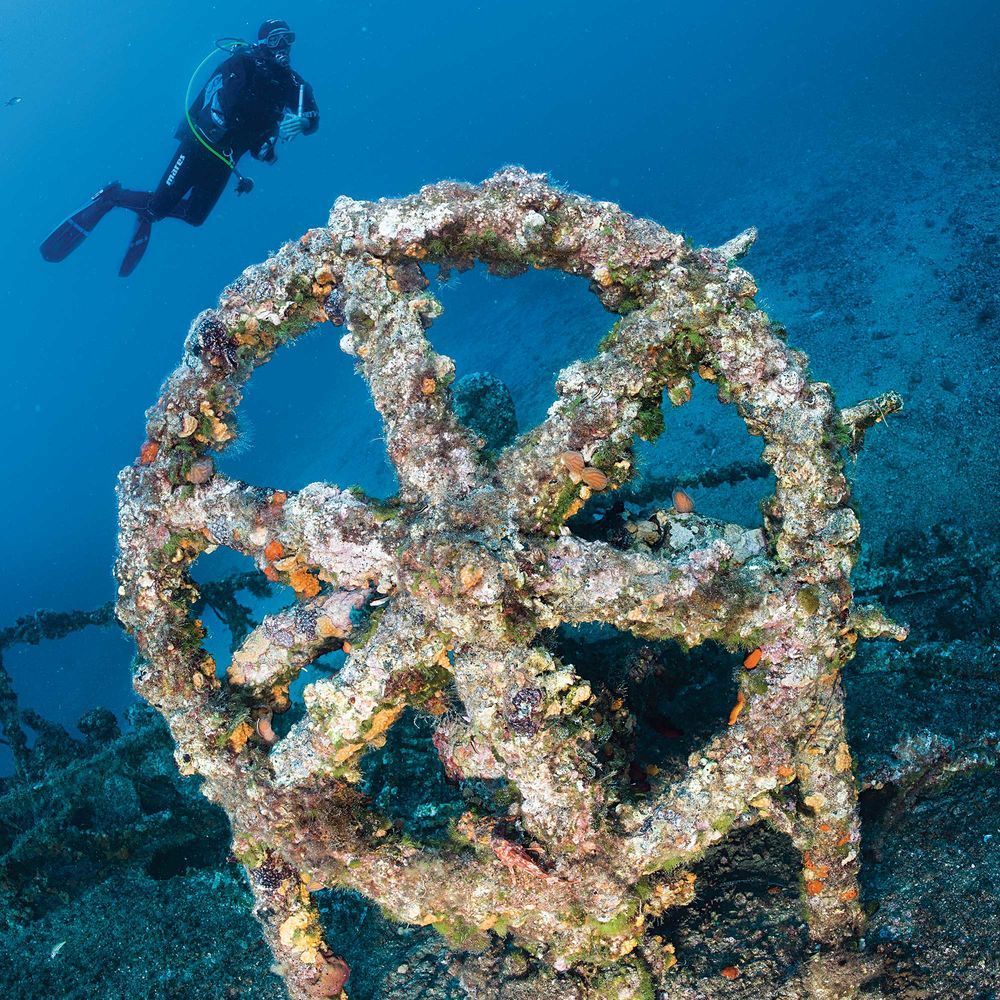 On December 17, 1944, the Tulsamerican flew out of Italy as part of a large raid of 800 aircraft, encountering ferocious German fighter defenses, suffering a severe gunshot wound and losing its engine. The crew headed for Vis, but as they prepared to land, all of the remaining engines failed, and the water on landing, ripping the plane apart, threw the seven crew members into the sea, where three of them died immediately. Unlike the nearest B-17, this crash is really a miracle that some of the crew survived. The wrecked cockpit lies upside down, though the B-24’s huge wingspan is immediately recognizable, as are the engines and the left-hand landing gear, whose tire is now orange because of the sponge that has grown on it. After a short drive, we find one of the gun turrets dropped from the plane during the huge impact already deeper at 50 meters; following Marovich’s lead, we meet a solemn John Dory hovering beside the propeller before the entire tail section of the plane appears.

The Liberator was the most produced American airplane in history – along with the B-17, it was a mainstay of the U.S. strategic bombing campaign over Europe in World War II. There are believed to be at least 10 other Liberators lying around the Vis, waiting to be discovered.

Shape of the ship.

Aircraft wrecks are undoubtedly the highlights of the Vis dive, but there are also many shipwrecks, some of which are huge and require multiple dives to explore. A 20-minute boat trip from the Manta Dive Center brings us to one of the most popular, the steamer Vassilios T., which sank in March 1939 with a cargo of coal. On the port side, this wreck is between 20 and 55 meters and is ideal for sport and technical divers. Swimming toward the stern, we see the inlaid deck mechanisms before the cavernous holds appear. On the seafloor lies a mast covered with the yellow sponge Aplysina aerophoba; although the bridge itself has disappeared, the remains of the funnels can be seen.

As we swim further, the depth exceeds 50 meters, and the stern with its fan-encrusted coral towers above us. The large propeller is still attached; as we ascend to shallower depths, the multicolored tracks create the perfect shelter from the gentle current. Other wrecks near Comigi include Fortunal, a fishing boat that lies between 40 and 50 meters on the edge of the descent, and the Teti wreck, which lies between 5 and 33 meters and is home to a large sea eel and moray eel.

The Ursus was an armed tug of the Italian Navy, shelled from the British submarine Rorqual in January 1941. At the time it was towing a floating pontoon armed with weapons; after Ursuscaught caught fire and sank, the pontoon drifted, carrying several survivors, before it was caught in a storm that led to the deaths of many sailors. This tug lies on the opposite side of the island from Komizhi and stopped, lying right on the slope. The stern lies at 45 feet, where a nameplate can be found; there are holes along the intact hull leading below decks. On top of the wreck a mounted 76mm (3-inch) gun can be seen.

One of the best ships on the Vis can be found at the same depth. The Brioni was a steamer that survived World War I and sank off the coast only after running aground with tobacco and wine in 1930. This intact, beautiful ship now lies on the port side between 40 meters on the stern and over 60 meters on the bow. As we swim to the edge of the descent 15 meters, we can already see the wreck below us going into the distance.

The stern locks are covered with tubular sponge, which seems to thrive on the wreck in this area, and it adds a rusty color; floating forward, the depth gradually increases as we pass the intact bridge, which is still in excellent condition.

READ
What to see and visit in Brussels

Penetration of the wreck is possible at several points. Our return requires crossing the entire length of the ship before we reach the cliff to begin the ascent and decompression.

Vis has a set of stunning and historically significant shipwrecks, but mostly remains an area of regional clubs that are visited year after year. With a passion for deep-sea exploration, Marovich and his father continue to seek out new stamps to explore. Since I left the island, they have successfully found and dived and another B-24 and B-17 lying over 100 meters deep, a Catalina boat at 90 meters and a large SS Michael N. Maris at a depth of 70 meters. The Vis has many secrets yet to be discovered.