What to see in Sharjah – top attractions

The sights of Sharjah are often compared to the pearls of the Arabian Peninsula. Sharjah is a small but modern and cozy city, spread out on the coast of the Arabian Sea. Despite the fact that Dubai is nearby, many travelers prefer to stay here. The main reason is that Sharjah surprisingly enough place and the historical sites (which is quite a rarity in the UAE), and the huge shopping centers and snow-white beaches. In contrast to the modern Dubai, here is a simple, laconic buildings, as well as museums and many cultural centers. Just mosques alone there are more than 600. Sharjah has a variety of interesting places to visit on your own, and there is plenty to see.

When traveling to Sharjah, be aware that it is quite a “dry” city, where it is forbidden to drink alcohol, no hookah rooms and must wear closed clothes.

Historically, Sharjah is one of the richest cities in an already poor country and has many places of interest. The city is often referred to as the crown jewel of the United Arab Emirates. What is worth seeing on your own in Sharjah?

Al Noor Mosque (translated from the Arabic as ‘prostration’) is probably the most famous attraction of the Emirate of Sharjah. It is a beautiful and picturesque building of white marble, built in the likeness of the Blue Mosque in Istanbul. Like the ancient Turkish temple, the Al Nour Mosque has 34 domes and is open to tourists. It was built in 2005 and named after the son of the Emir of Sharjah, Sheikh Mohammed bin Sultan Al Qasimi. During the construction of the landmark the most modern technologies and materials were used. 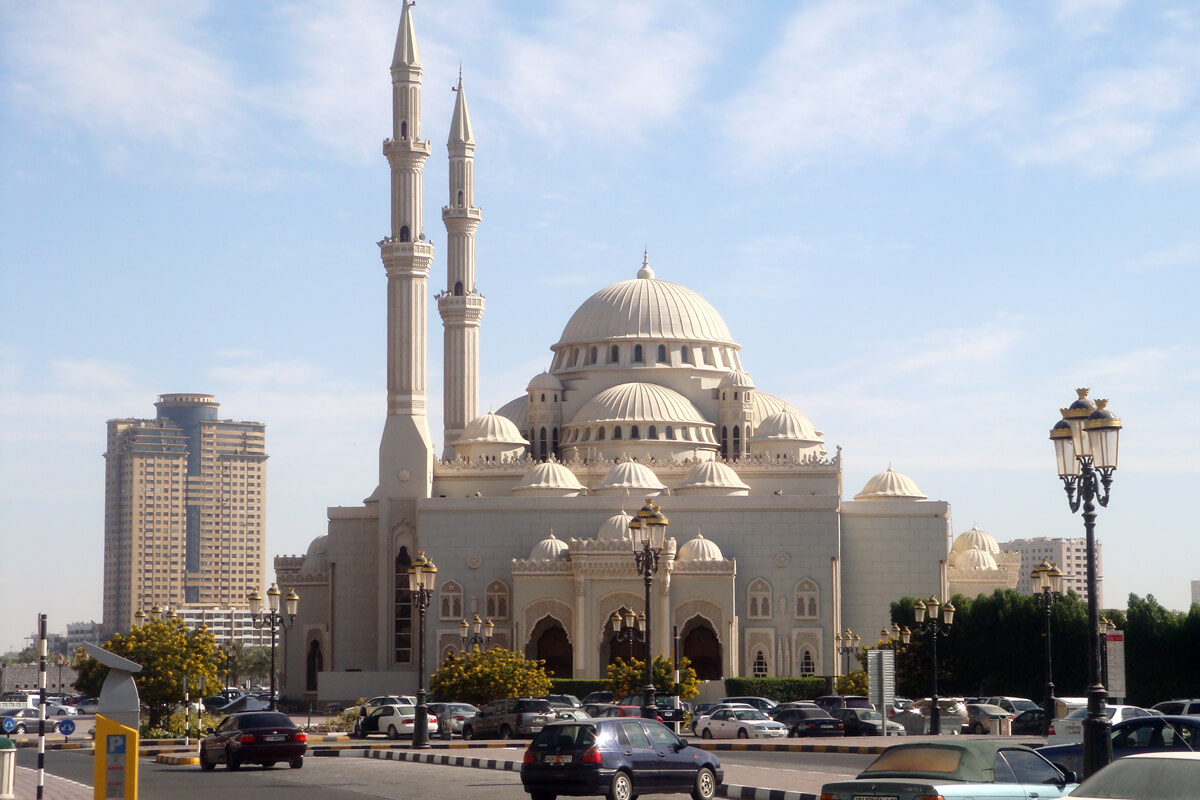 The interior decoration of the Muslim temple is also striking in its beauty and luxury: the walls are lined with natural stone and painted by local artists. Traditionally, the mosque has two prayer halls: the men’s (for 1800 people) and the women’s (for 400 worshippers) one. 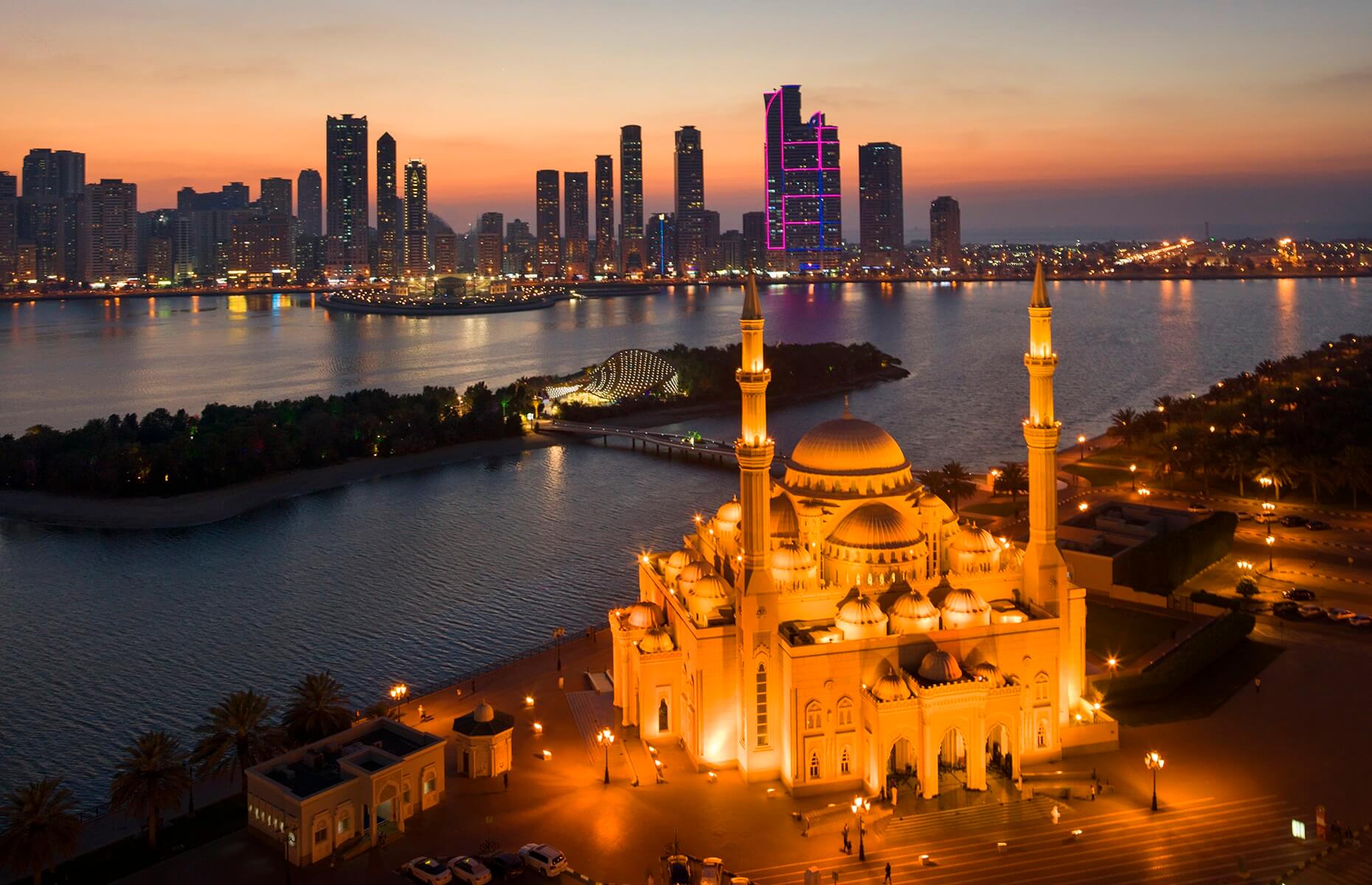 At night, the snow-white building becomes even more spectacular: the light turns on and the mosque gets a brilliant golden hue. By the way, next to the attraction in the evening works light fountain, which is also worth seeing.

Al Nour Mosque is open to all comers: not only Muslims can come here, but followers of other religions as well. When visiting the temple on your own, you should remember the following rules: you can’t eat, drink, hold hands, talk loudly and wear open clothes in the mosque. 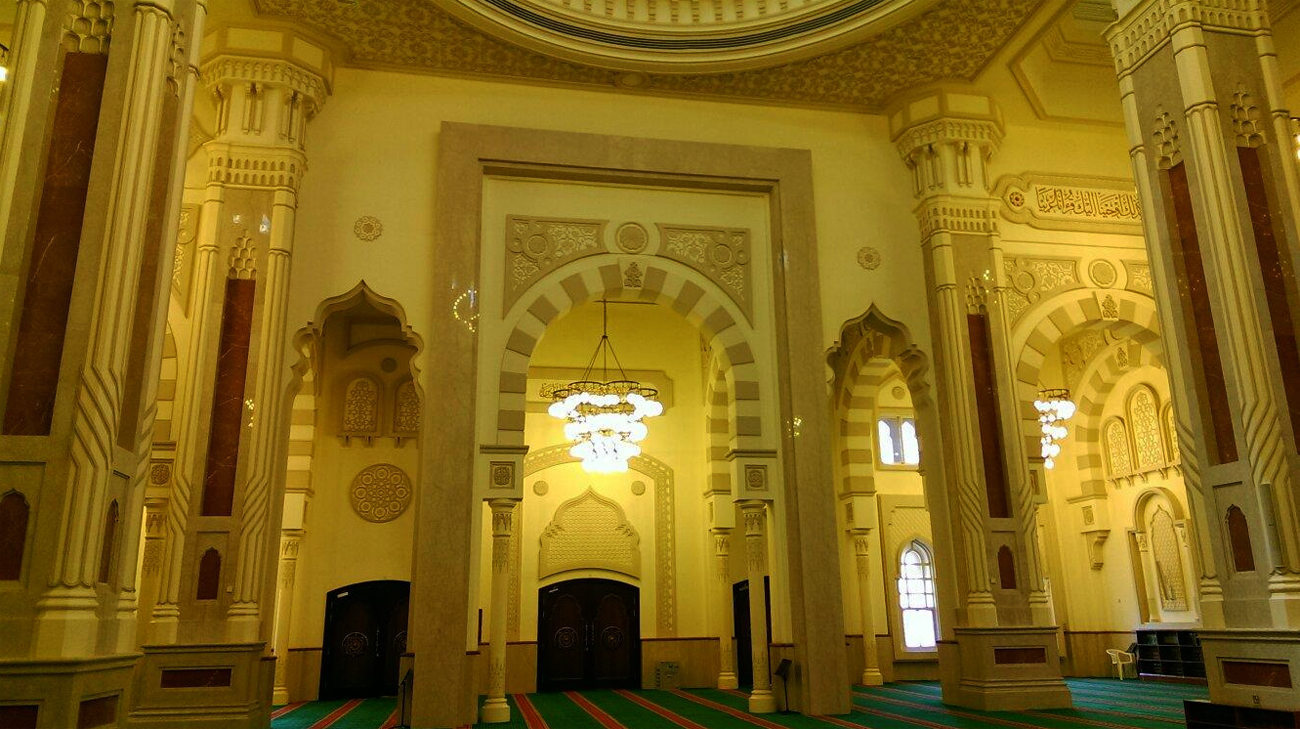 Al Nour Mosque is one of the first places to see in Sharjah.

Mlekha is a small town in the Emirate of Sharjah, recognized by historians as the oldest archaeological site in the Arab Emirates. The very first artifacts were found not so long ago: in the 90s, when they were laying a water pipeline. Today, the Mlekha Center of Archaeology stands on this spot. The tourist site is not very popular yet, as it was only opened in 2016. However, the authorities plan to turn it into a center for tourism and archaeology. 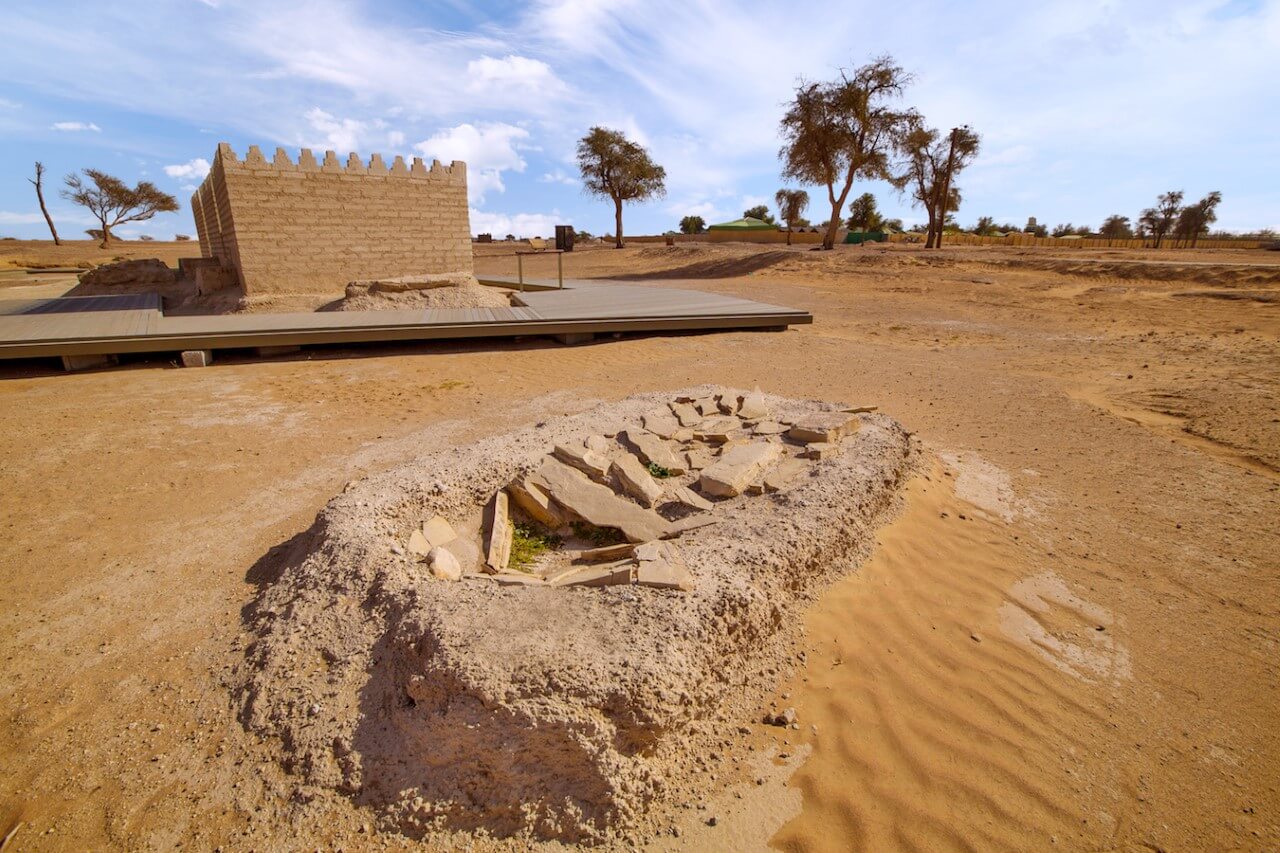 The Mlekha Archaeology Center is a huge complex, which includes many buildings. Firstly, it is the main museum building, which houses all the artifacts: pottery, jewelry, tools. Secondly, it is a huge fort in which archaeologists have found several ancient tombs and many treasures. Thirdly, it is an ordinary residential houses: many of them are historical monuments, and it will be interesting just to walk around the town. 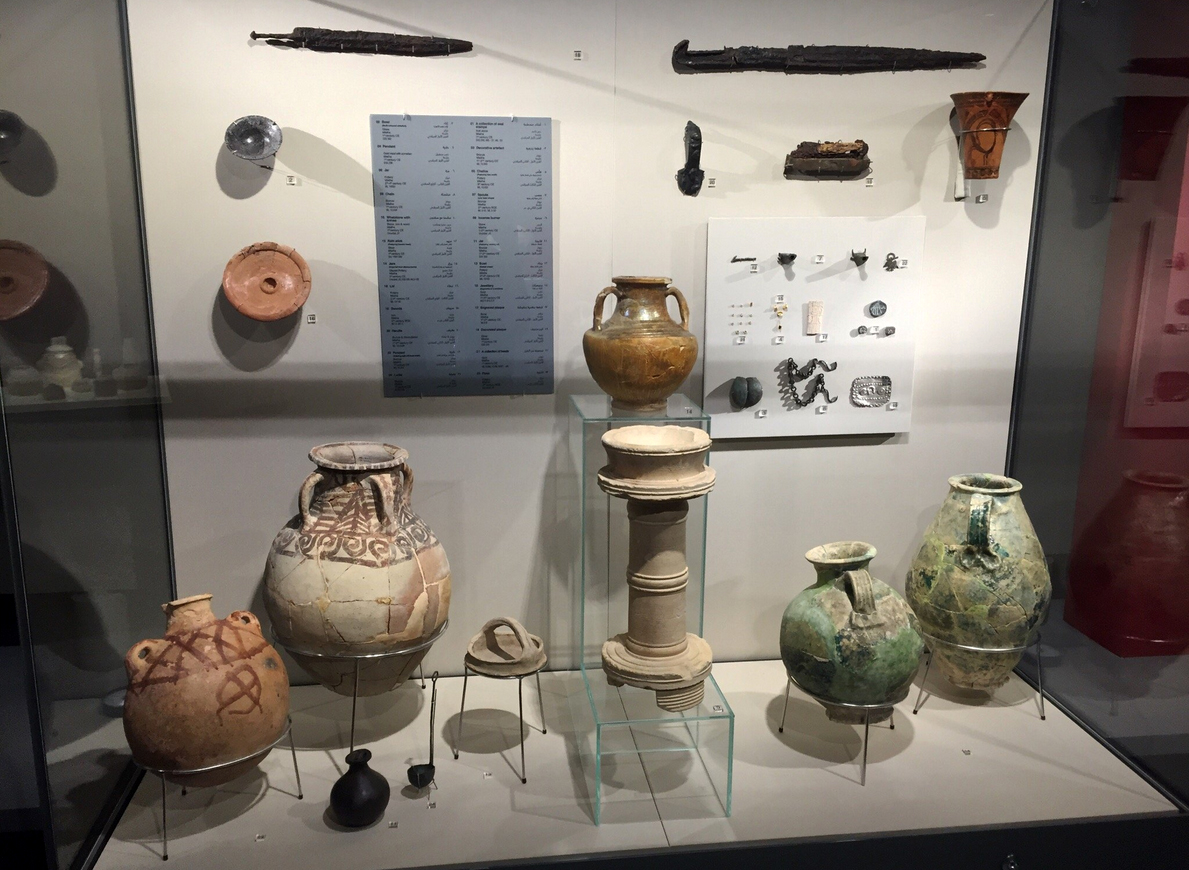 It is also worth seeing the valley of caves and the camel cemetery for yourself. For a fee, you can visit a real excavation: talk to archaeologists and dig.

What else can I see in Sharjah (UAE)? The first thing many people will say is the car museum. This is a huge showroom, which collected cars from different eras and countries. A total of about 100 rare cars and about 50 vintage motorcycles are on display. The two “oldest” models are the Dodge and Ford Model T, made in 1916. The “newest” cars rolled off the assembly line in the 1960s of the 20th century. 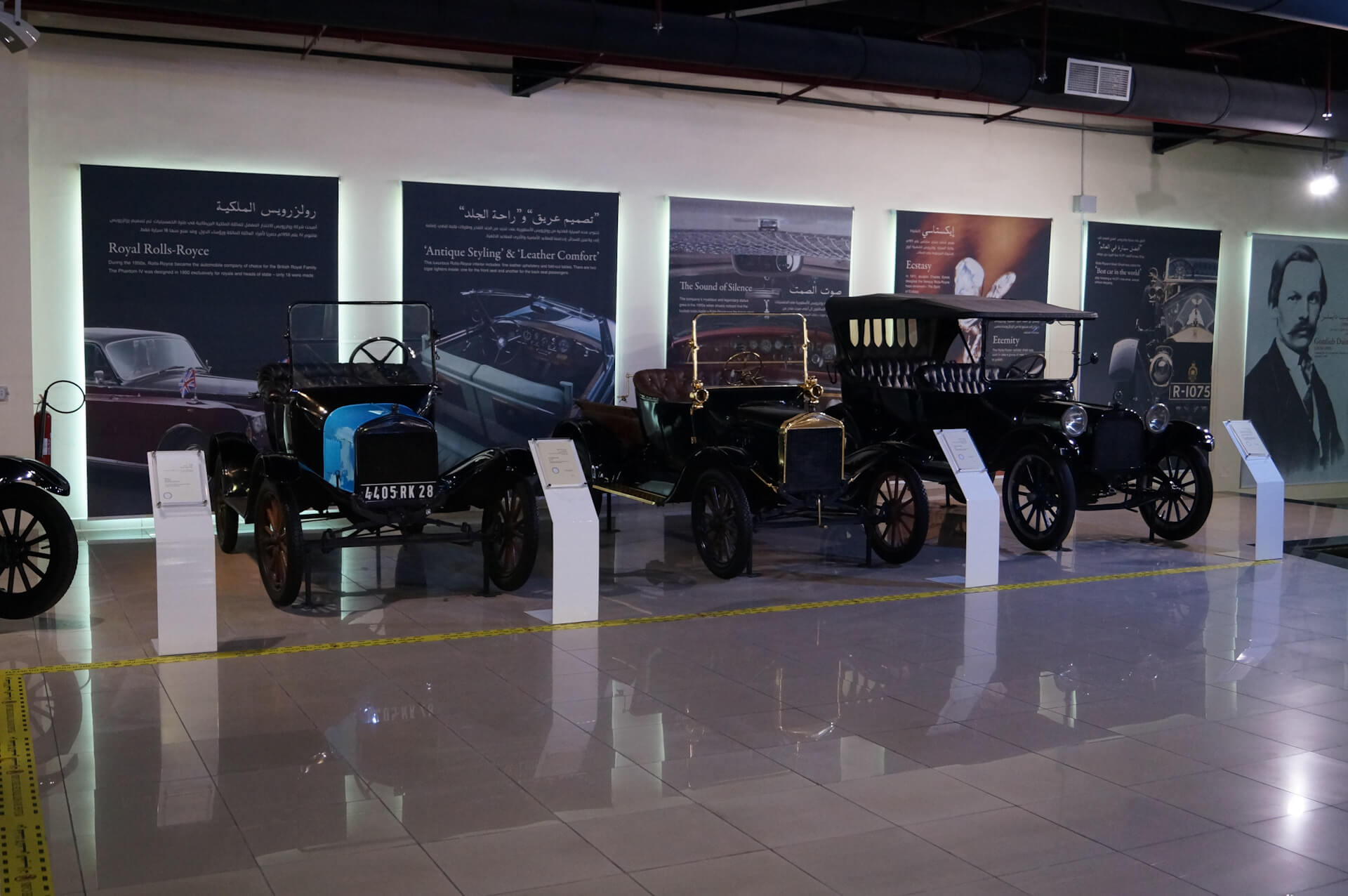 During the tour, the guide will not only talk about the making of the cars, but also demonstrate how the various parts of the cars function. However, the exhibition hall is not the only place where you can see the rare vehicles on your own. Just step behind the museum building and you will see a huge number of broken, shabby and broken-down cars. All of them were also made in the 20th century, but just haven’t been restored yet.

Arabian Wildlife Center is the only place in the UAE where you can see the animals of the Arabian Peninsula on your own. It is a huge zoo located near Sharjah Airport, 38 km from the city. 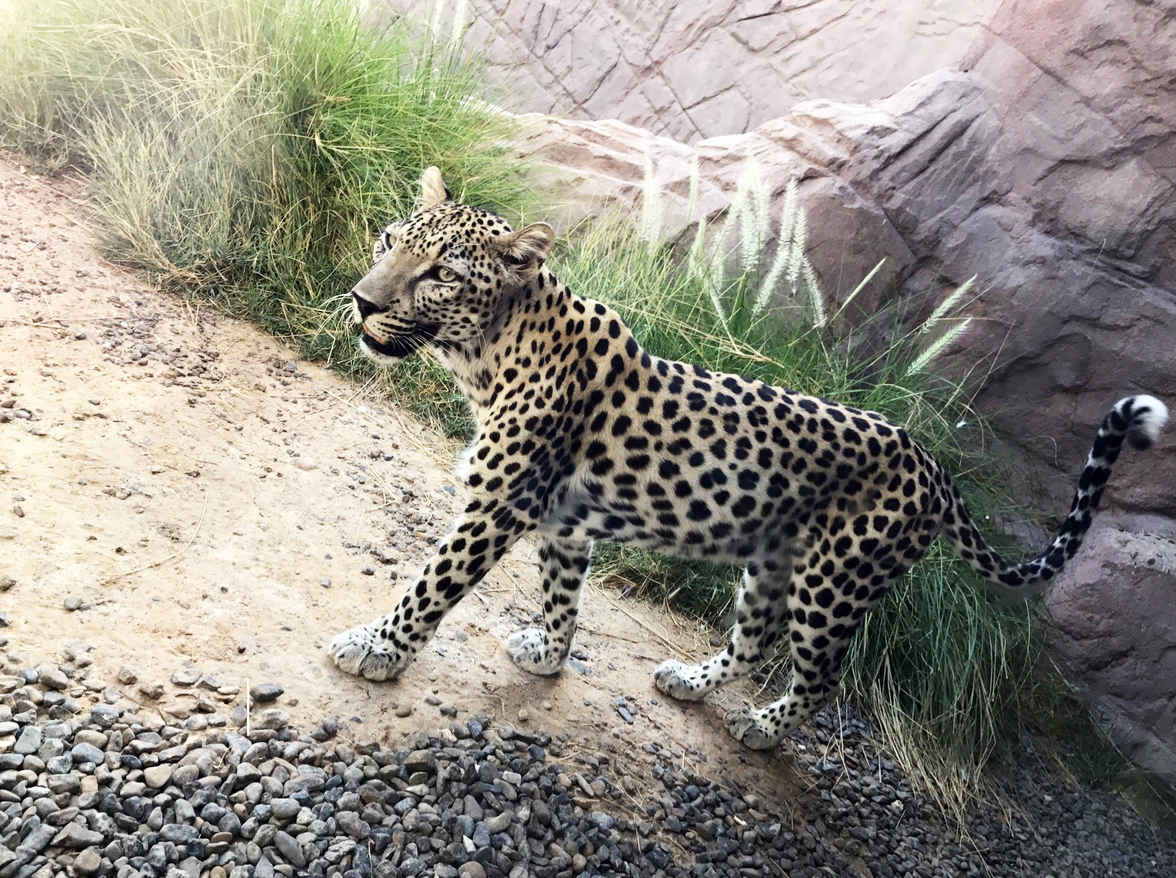 The animals live in spacious enclosures and can be watched through the huge panoramic windows. A big plus of the center is that tourists do not have to walk under the scorching rays of the sun, and can look at the animals from the cooler rooms.

In addition, near the wildlife center is a botanical garden, a children’s farm and ornithological fauna. On your own, you can visit all these places for free – it is already included in the ticket price.

Al Majar Park is where the famous dancing fountains are located. You can see the attraction sitting on the waterfront, in one of the many cafes, or in the hotel nearby. In addition to the colorful fountains in the park there are many sculptures, a golf course, a mosque and several sites where concerts are periodically held. 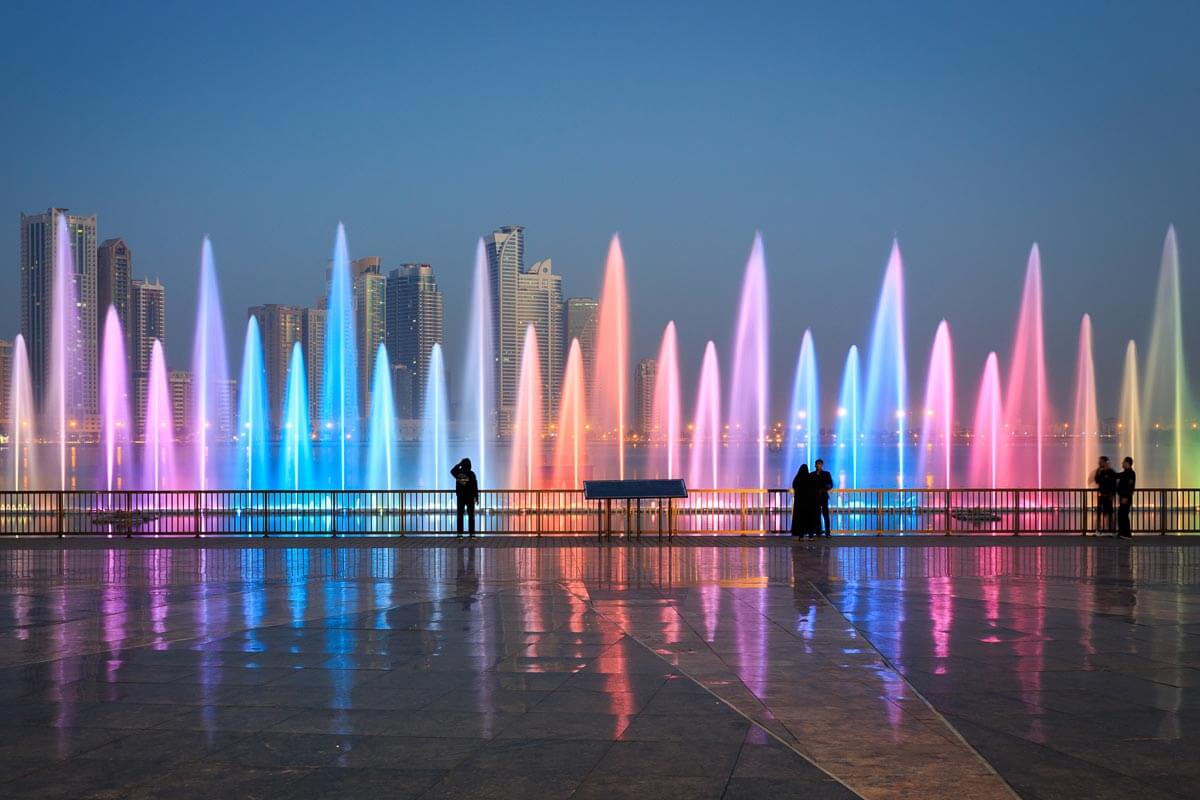 The dancing fountains have five show programs. The most famous and unusual is Ebru. It is an unusual performance created in the water marble technique by the show designer Garib Au. All 5 shows are shown daily (though they always show them in a different order).

Buhaira Corniche is one of the favorite places to relax for locals and tourists alike. There are spectacular panoramic views of Sharjah with towering skyscrapers, a Ferris wheel and cozy restaurants. Experienced travelers advise taking an evening stroll here after a hot day. At this time, all the buildings are beautifully illuminated, and the palm trees complete the picture. 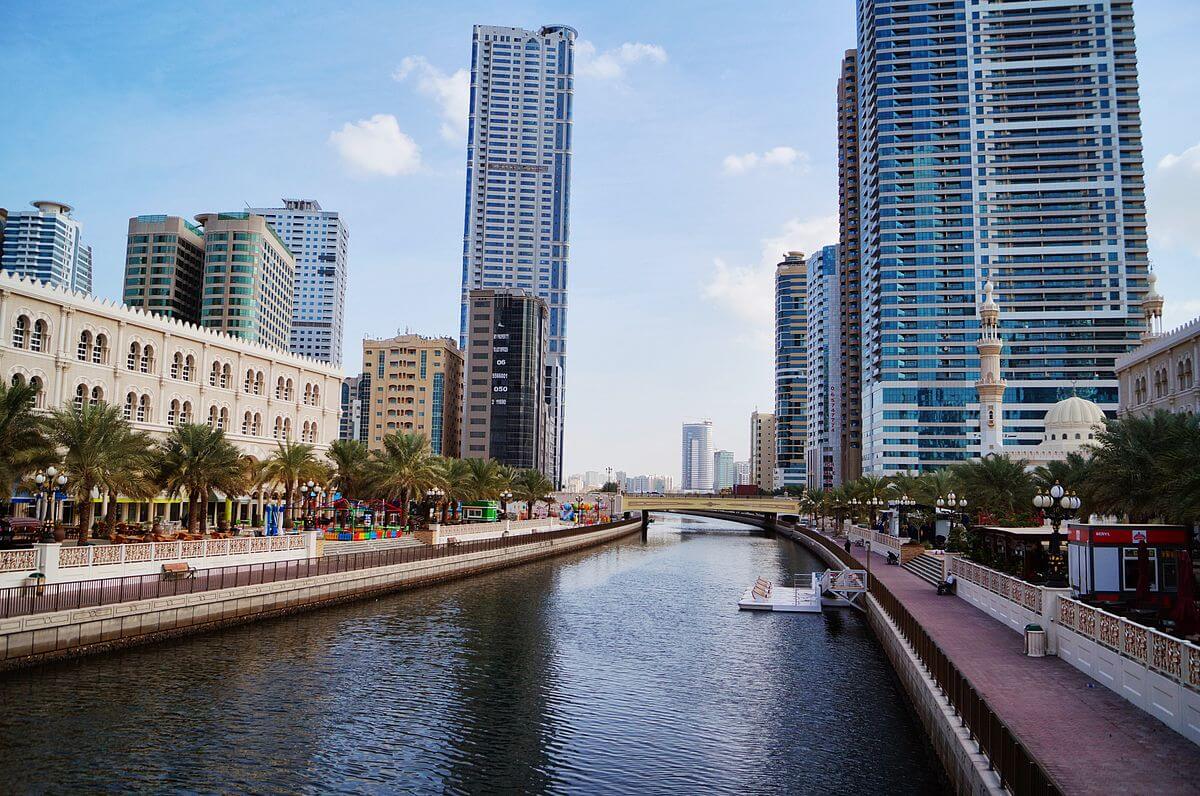 Locals recommend renting a bicycle so you can explore the city on your own. If you come here in the daytime, you can sit on the grass and relax. The promenade is a great place to start your trip: almost all the attractions are nearby.

If you think you’ve seen it all and don’t know what else you can see on your own in Sharjah, head over to the Museum of Islamic Civilization. 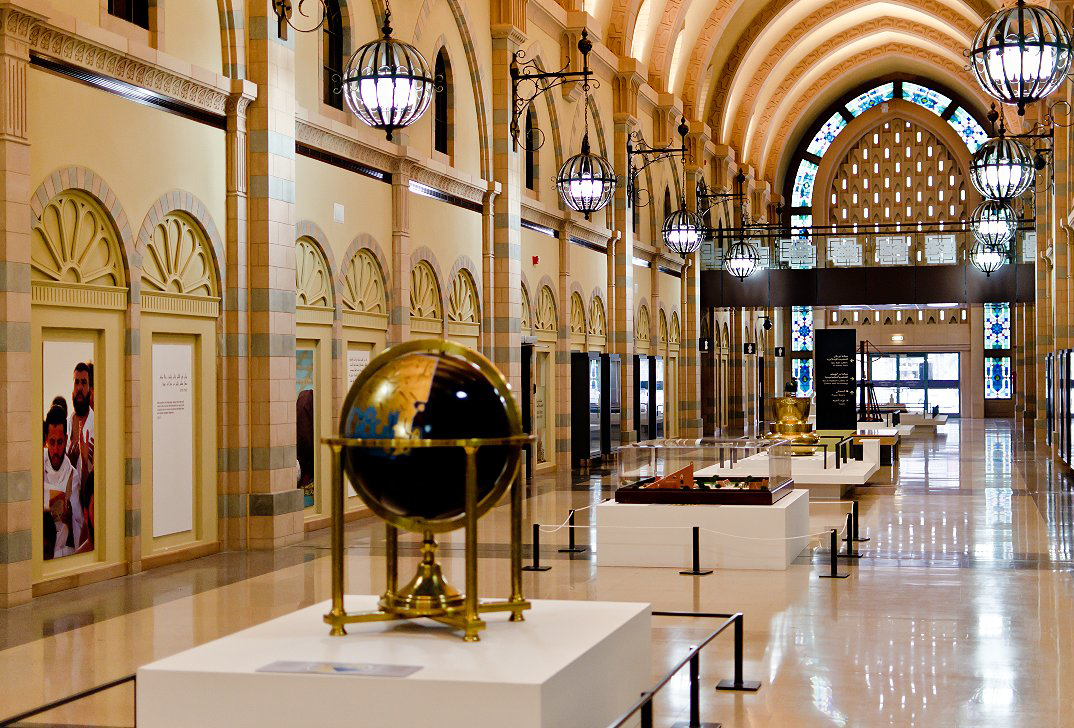 All the exhibits touching upon the culture of the East have been collected here. This includes ancient works of art, banknotes from different epochs, antique items of everyday life. The building is divided into six parts. The first one is Abu Bakr gallery. Here you can see Koran and see for yourself the most outstanding models of Islamic architecture. This part will be especially important and interesting for Muslims as it tells about the role of Hajj in the life of believers and the five pillars of Islam.

The second part is the Al-Haifam Gallery. Here you can see for yourself how science developed in Muslim countries and get acquainted with various household items. The third section of the museum is a collection of ceramics, clothing, woodwork and jewelry from different eras. In the fourth section, you can see all the artifacts dating back to the 13th-19th centuries. The fifth section of the attraction is dedicated to the 20th century and the influence of European culture on Muslims. The sixth section contains gold and silver coins from different eras. 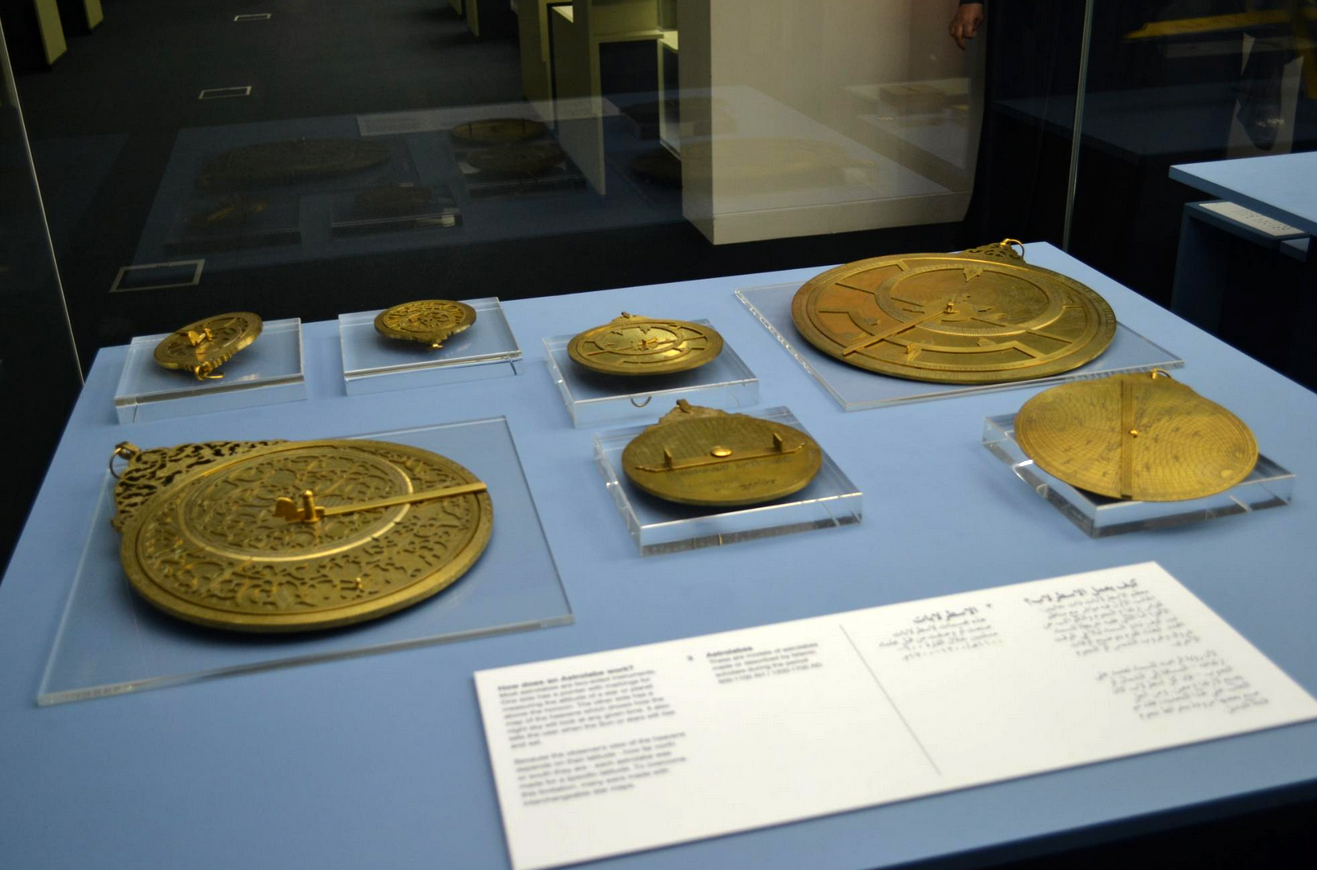 In addition, various exhibitions and creative meetings are often held in the center of Islamic civilization.

One of the most spectacular sights in Sharjah is the huge city aquarium located on the shores of the UAE Bay. It is an amazing structure in many ways. 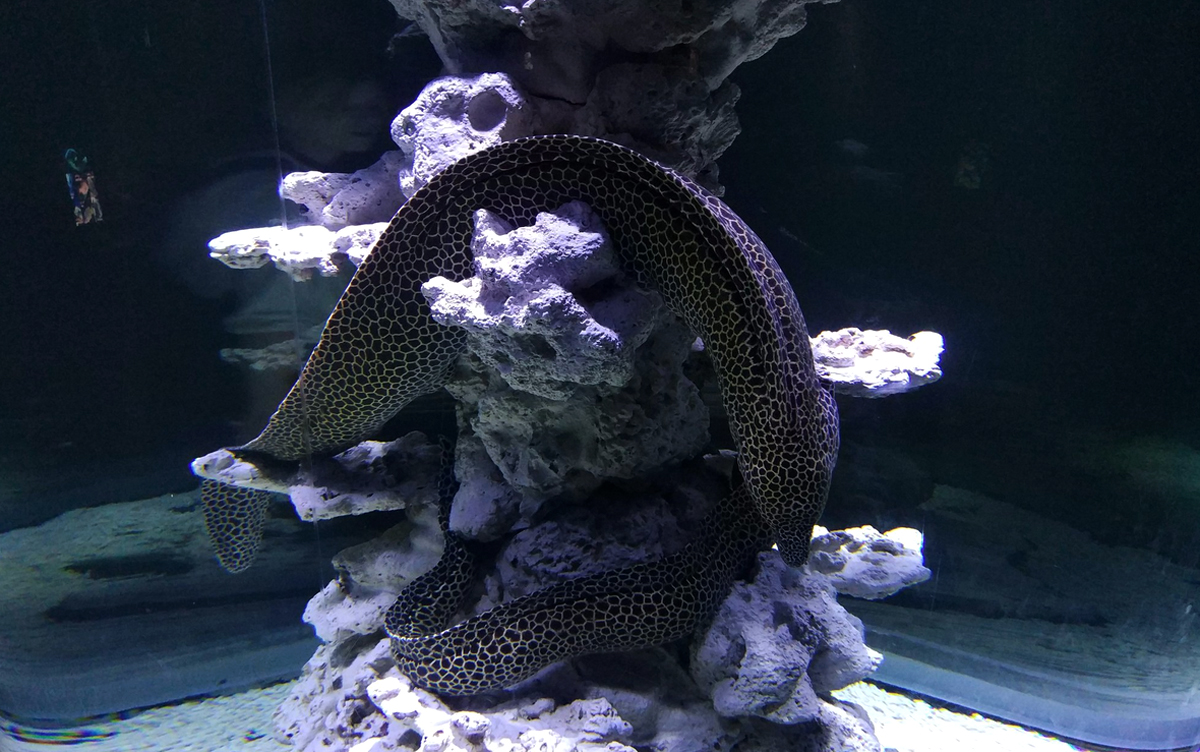 Firstly there are over 250 species from the Indian Sea and the Arabian Gulf, including a variety of fish, seahorses, prawns and turtles. There are even moray eels and sea sharks. Secondly, for a fee, you can feed the fish and other inhabitants of the aquarium yourself. Thirdly, each screen has a special display, where you can learn interesting facts about each inhabitant of the sea.

Next to the aquarium is a playground and a souvenir shop.

Like many cities with access to the sea, Sharjah has been alive since ancient times thanks to the water: people catch fish, build ships and trade. Archaeologists have found so many marine artefacts that a museum was founded in 2009. It is a grandiose structure with many halls. Among the interesting exhibits are many models of ships, different kinds of shells (they were often used as dishes) and a reconstructed ship’s cabin with goods that were carried to other parts of the world (spices, fabrics, gold). 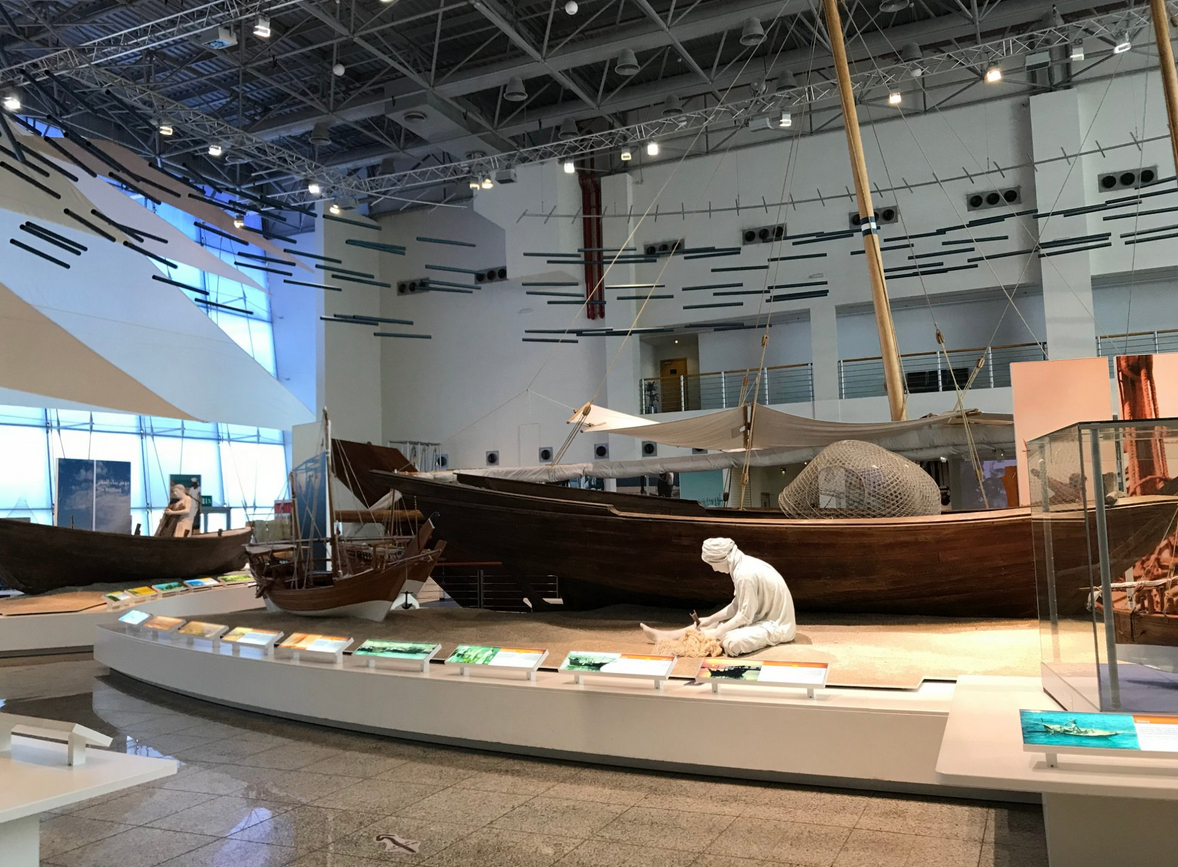 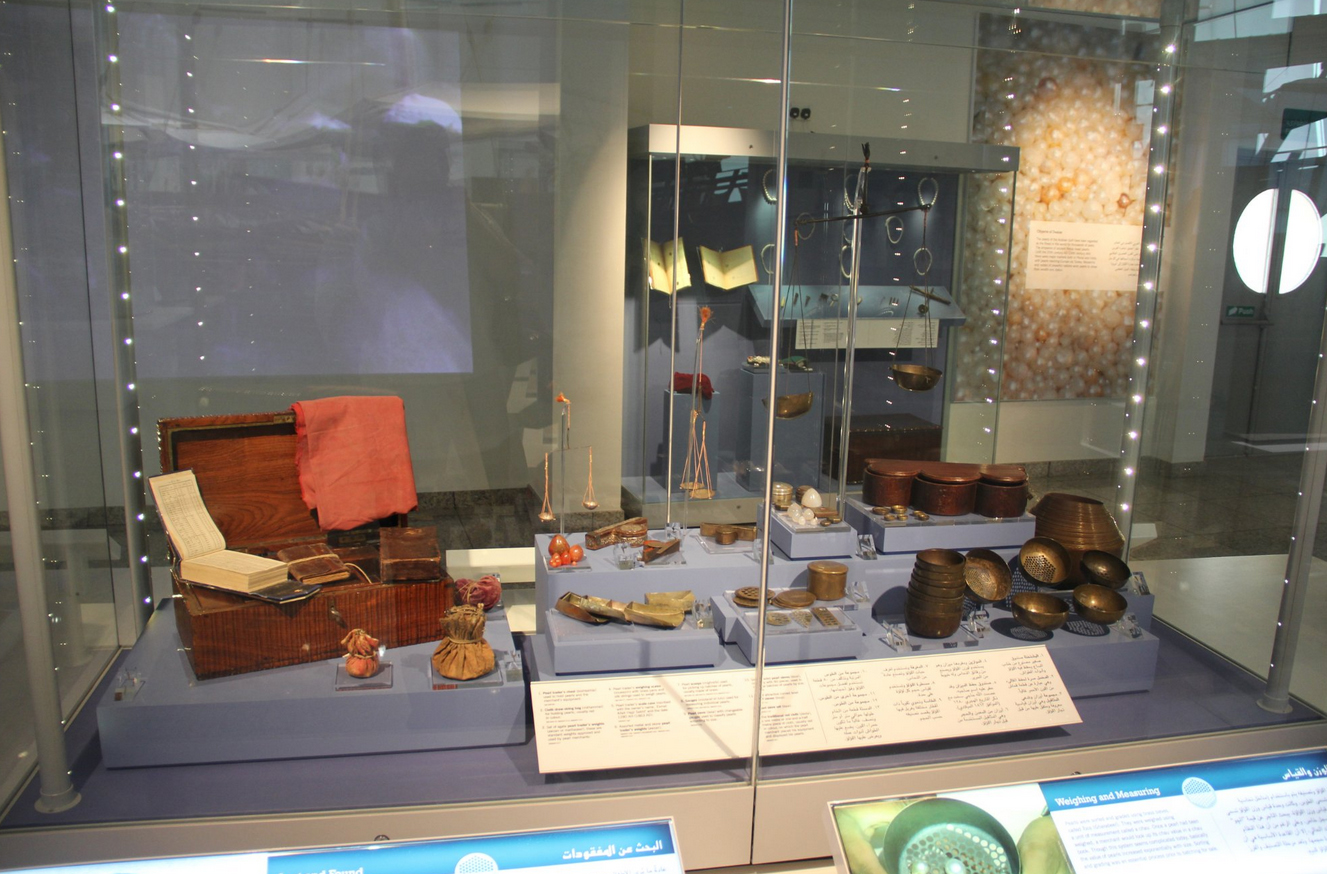 In the maritime museum you can also see how the pearl fishermen harvested real Arabian pearls: how they identified the shells, weighed the precious mineral and made jewelry from it. In the exhibition you can see a number of pearl catching tools.

There is definitely something to see in this city – the sights of Sharjah will not leave anyone indifferent, will surprise even seasoned travelers.

Updated: 19 Sep, 2018 Zanzibar is a large archipelago in the Indian Ocean, which…

Updated: 4 Dec, 2020 For most tourists from the former Soviet Union, the familiarity of…

Updated: 5 May, 2021 Primarily the capital of Vietnam is visited by tourists…

Updated: 6 Jul, 2021 To see and learn about all the things that make Malaysia a…