Dinosaurs inhabited the Earth about 230 million years ago, during the Mesozoic era. According to research by paleontologists, there are at least 500 different genera of dinosaurs, including bipedal and quadrupedal dinosaurs and birds. These prehistoric animals continue to fascinate with their history and their still mysterious extinction. But is it possible to admire dinosaurs in Italy today? The answer is yes, because, in fact, Italy has many faithful life-size reproductions of dinosaurs living in as many theme parks. So a close encounter with these extinct animals is somewhat possible.

The park is located on the left bank of the river Adda, in the municipality of Rivolta d’Adda (Cremona), 20 km east of Milan. It covers an area of 100 hectares and inside there are dozens of life-size reconstructions of 34 different prehistoric species, including arthropods, fish, amphibians, archaic reptiles, dinosaurs, mammals and primitive man. There are also hundreds of wild animals in semi-free, natural environments such as marshes, meadows, lakes and botanical gardens. There are opportunities to relax in picnic areas and cafes. Labyrinths, botanical trails and a playground complete this huge facility surrounded by greenery. 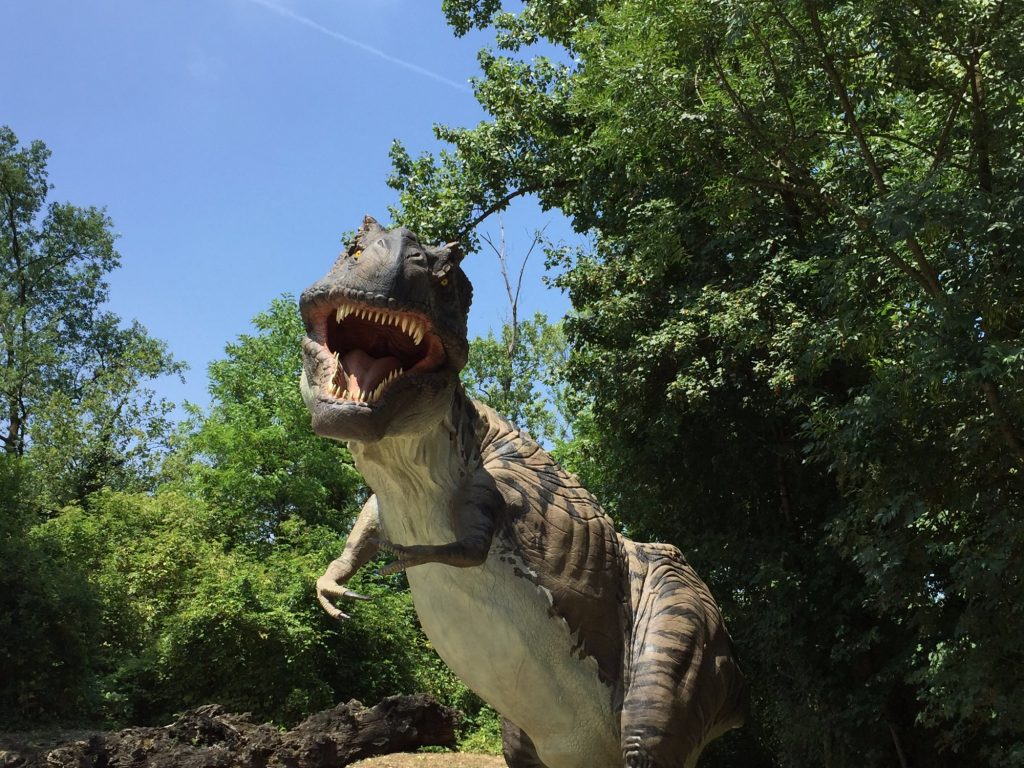 It contains a series of magnificent life-size reconstructions of prehistoric animals made by experienced paleontologists. This exhibition intends to present the many species of dinosaurs that inhabited the planet. A portion is devoted to mammoths, tigers, and animals associated with the Ice Age.

The park in the province of Pisa is three hectares wide and you can admire various life-size reproductions of dinosaurs as you travel through it. The specimens are reptiles and mammals from the Paleozoic, Mesozoic and Cenozoic eras and include a specimen of upright man . Inside the park is also a playground entirely dedicated to children, with swings, slides and a ropes course.

READ
The best places to see the Northern Lights in Norway 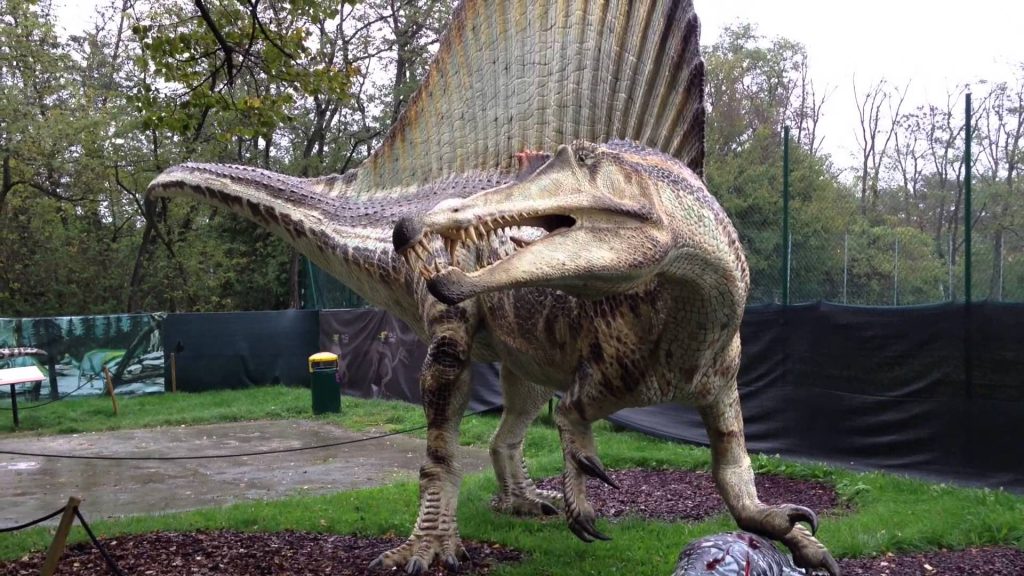 Located between Verona and Lake Garda, Parco Natura Viva stretches over 42 hectares and is home to 1,500 animals of 200 different species. Inside the park there are several areas dedicated to species from different parts of the world. You can see models in chronological order, from the first animals that appeared on land to the dinosaurs. 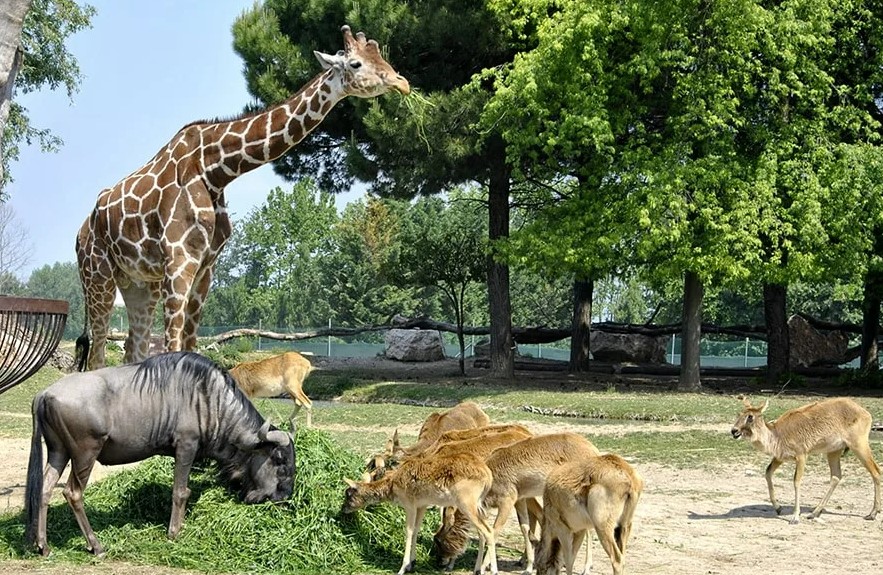 The park is located in a vast wooded area of 20 thousand square meters and rises along the banks of the river Cisone, in the territory belonging to the municipality of San Secondo di Pinerolo. The park offers an educational trail that intends to tell 160 million years of history through dozens of reproductions of the first small dinosaurs and then move on to larger specimens, studying fossil life and analyzing paleontological excavations. The entire playground in the park was also designed with a dinosaur theme, with mammoth trunk slides and stegosauri climbing. 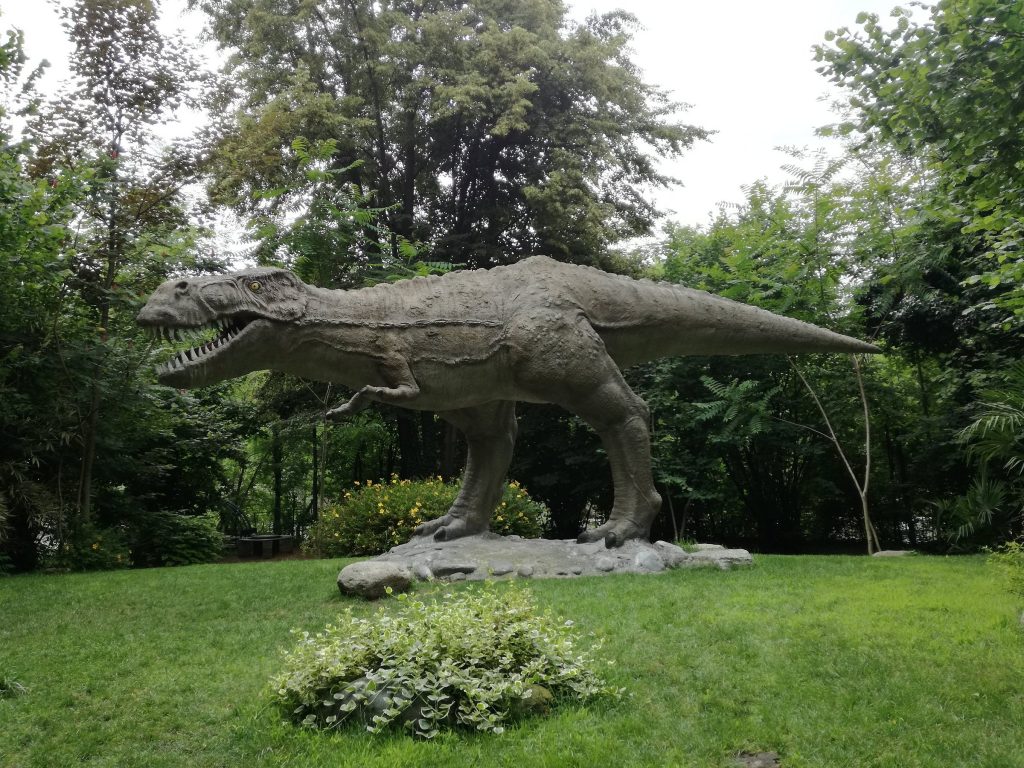 Inside the suburban park of Avezzano you can admire four large-scale electromechanical rides of prehistoric specimens, namely Tyrannosaurus rex, dinosaur egg, triceratops and crocodile. The specimens appear among the swings, slides and benches in the park, giving the urban environment a curious and prehistoric look.

It is located in San Lorenzello, near the Titerno River, in the province of Benevento, and was created to teach children about history while having fun. The area, one hectare wide, has both a multimedia room and a green area where you can have lunch and relax . Jurassic World has become known for the various life-size fiberglass reproductions that represent the many specimens of dinosaurs that inhabited the earth long ago.

READ
Rest in Egypt. Nuweiba. Resort for all financial possibilities

Simbario Park in Vibo Valentia province is dedicated to prehistory, starting from the first living creatures that appeared on Earth about 635 million years ago, namely in water. The story of the evolution of life continues until it reaches man and the educational activity is enriched with life-size examples of dinosaurs, interactive teaching methods and the possibility of walking in nature. The prehistory route lasts about an hour and runs along a 700 meters long trail. There are also picnic areas with bars and souvenir shops.

The park offers a forty-five minute guided tour that tells the history of the Earth and the animals that inhabited it, starting from the Paleozoic era, with primitive marine specimens, and then moving on to the Mesozoic era, characterized by large dinosaurs such as terepods and velociraptors, to the Cenozoic era, the era of mammals. The entire exhibition is outdoors, where at the end of the visit you can take a walk through the countryside. 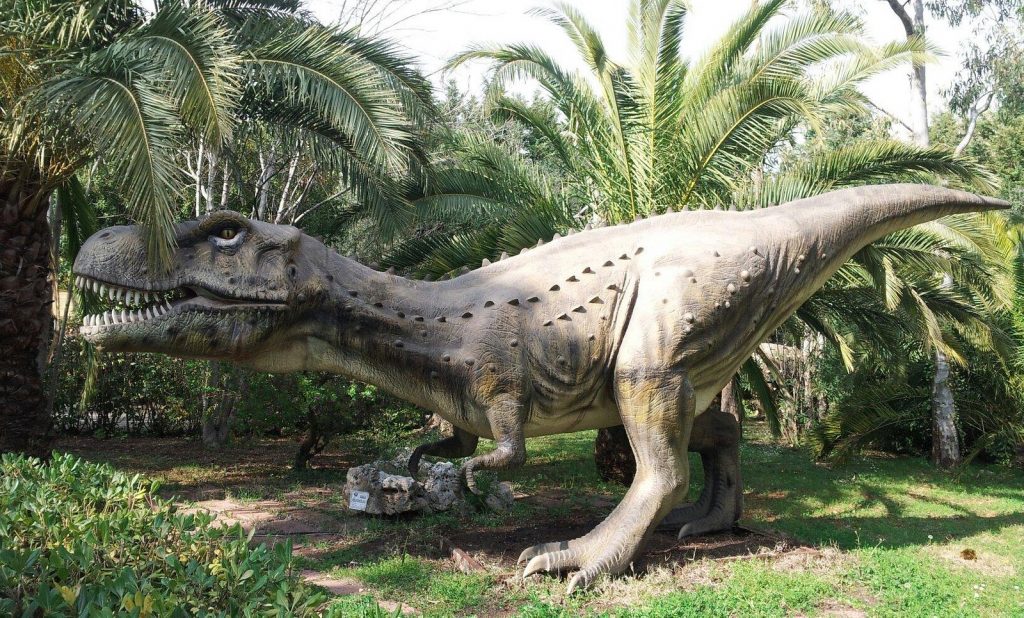 This is a picturesque park where visitors can take a tour with a speleologist inside the caves. A special feature of the itinerary is that in a certain place is the famous dinosaur cave, which is characterized by sections of limestone and thickened fossilized shells . The reptiles are made of papier-mache. The route is made lively and interactive, so it is suitable even for the very young. There are a total of 23 reconstructions of various prehistoric animals, from Tyrannosaurus to Brontosaurus, from Stegosaurus to Triceratops. In addition, since the caves of Famos were supposedly inhabited by primitive people, reconstructions of the primitive life of the people who once inhabited these caves have also been made. 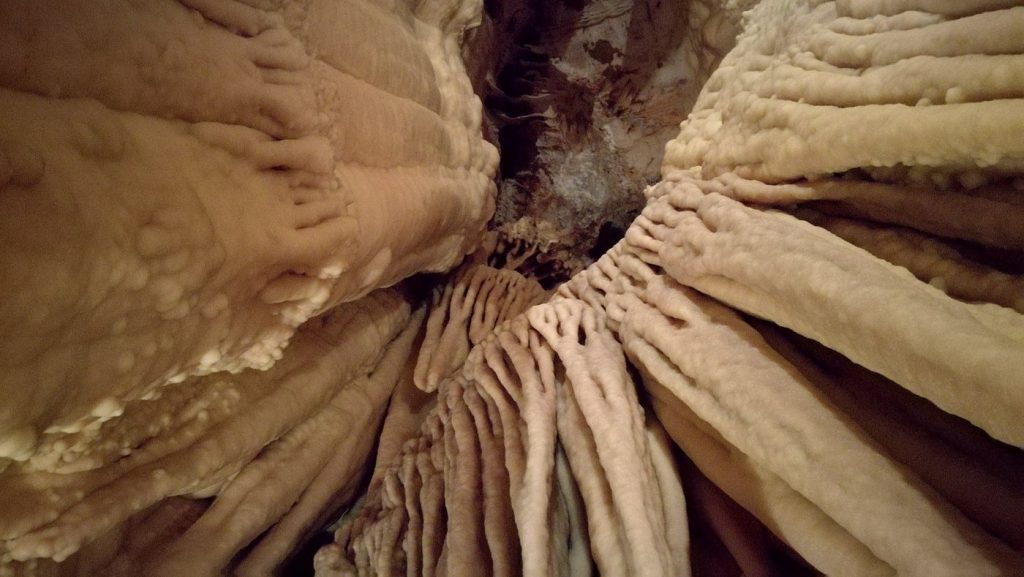 READ
10 things to do in Southampton, UK

The park is located at the foot of the volcano Etna, where you can go back in time by walking among scientific reproductions not only of dinosaurs, but also entire families of hominids, living creatures that walked the earth 430 million years ago. The beauty of the trail is also emphasized by the green plants and trees that enrich and frame it . In addition to the huge mechanical rides, one can find numerous resting points, pools, green areas, trails that can be taken by rafts and boats, exciting slides and many activities suitable even for children. 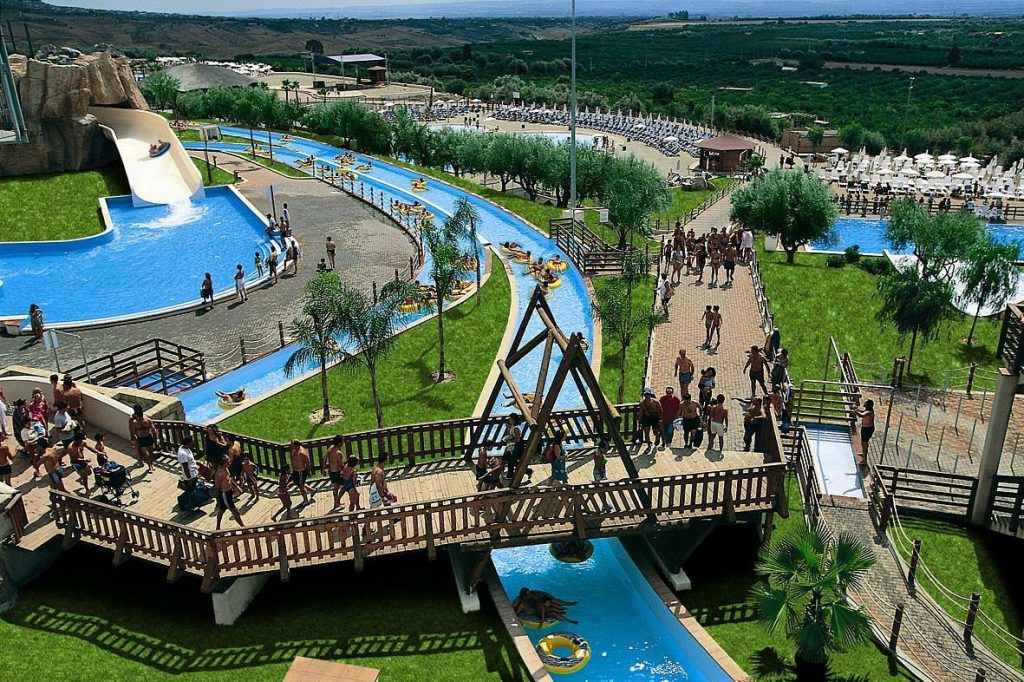 The park offers the opportunity to ride next to beautiful specimens of animals, from sea creatures to large carnivores, from insects to dinosaurs. Apparently, these are creatures to admire, thanks to accurate life-size reproductions. 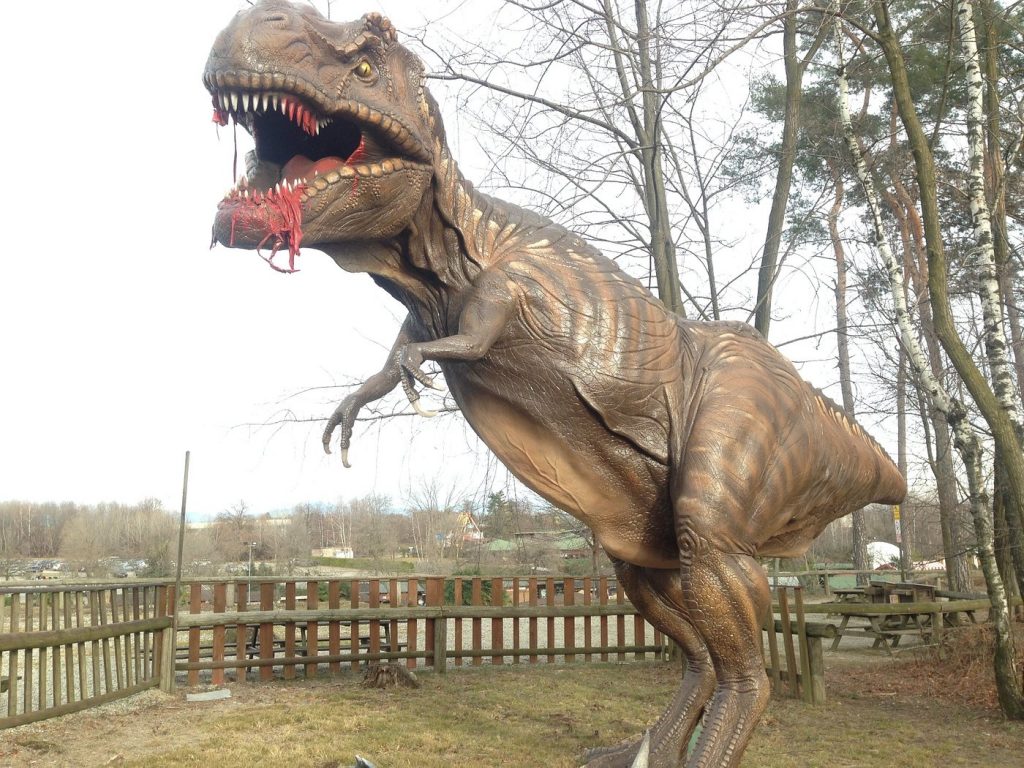 The park extends near Lake Maggiore on an area of 450,000 square meters and includes an amusement park where you can spend time between the various mechanical rides and in the show park where you can watch performances of different animals.

The story of baby Ciro and tricked out Giovanni + video

One day in 1981, an amateur paleontologist was working in Pietraroja (Beneventano) and noticed various fossils in the garbage heap that had been bulldozed. Giovanni noticed a small boulder, which he loaded into the car along with other stone blocks.

At home, after breaking the boulder, Giovanni Todesco discovered a perfectly preserved fossil of an ancient animal on the stone bed. The stone took its place among the other stones in the barn and was named Chiro by its owner.

For twelve years, Chiro didn’t get much attention from Giovanni, but that all changed after watching the movie Jurassic Park. It was then that the amateur paleontologist learned the origins of his Chiro-it turned out to be a real dinosaur .

In the movie it was a small dinosaur of the species Scypionix samniticus. Having made this discovery, Giovanni called the following morning to the Natural History Museum of Milan, to the Department of Paleontology. After speaking with the head of the department, Giorgio Teruzzi, the museum staff immediately came to Giovanni to see the find. Upon inspection, there is no doubt that the find is authentic and indeed contains a baby Scypionix dinosaur.

Dinosaur Chiro – the find of the century

After what has happened, Giovanni heads to Naples, Directorate of Archaeology, and from there heads to Salerno, where he leaves his Ciro to be examined.

Five years of persistent silence leads Giovanni to despair and he goes on television for a program from which he calls for an answer to the question, “What happened to his find?”

The fossil undergoes a painstaking study by scientists with ultraviolet light, tomography and electron microscopy, and in 1998 the journal Natura publishes an article about the Ciro fossil: the fossil is 115 million years old and the baby dinosaur died two weeks after birth. The magazine calls this find “the discovery of the century”. 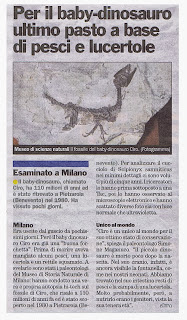 More about the finding: A fontanel was found on the head of the dinosaur, which had not yet had time to overgrow, the body surface was covered with feathers, was a predator, even in adulthood was small in size, half of the egg was preserved under the belly, which retained a small supply of food for the first period of life.

A fish spine, the remains of a reptile, and the foot of a lizard were found in the dinosaur’s stomach.

The foot was a large size, so it could not hunt it on its own. Consequently, the assumption is that the cub was fed by its parents.

In return for his services, Giovanni Todesco received “gratitude” in the form of nervousness and black ingratitude. Not once or anywhere was his name mentioned as the man who discovered the fossil.

Not only that, a year later his barn was and confiscated all of his personal collection and was accused of illegally collecting and concealing ancient fossils.

It wasn’t until 2004 that the charge was dropped. Giovanni was recognized as an honorary citizen of Italy, who contributed to the development of the search and preservation of cultural values.

It is worth noting that Ciro’s dinosaur was valued at three million euros. Giovanni Todesco has not received any material values for his services.

Since 1998, Giovanni has been writing to get at least a cast of Chiro, but they remain unsatisfied. At the moment Ciro is in the Archaeological Museum of Salerno.