Among the most densely populated and picturesque municipalities located on Lake Garda, Desenzano del Garda certainly takes first place: not for nothing is it one of the favorite places for Italian and foreign tourists visiting the famous lake area. The town, known mainly for its beautiful Roman villa, castle and a very rich archaeological museum, is only a few kilometers from Brescia and Verona, making it ideal for a half-day trip.

Cathedral of Santa Maria Maddalena. The city’s main temple, the cathedral is a Baroque structure designed by Italian architect Giulio Todeschini and consecrated in the early 1600s. Besides the beautiful and imposing exterior facade, it’s worth a visit even if you don’t believe what it contains: it refers to the famous painting of the Last Supper painted by the Venetian painter Gian Battista Tiepolo. Also not to be missed are several canvases in the presbytery that depict vivid episodes from the life of Mary Magdalene. 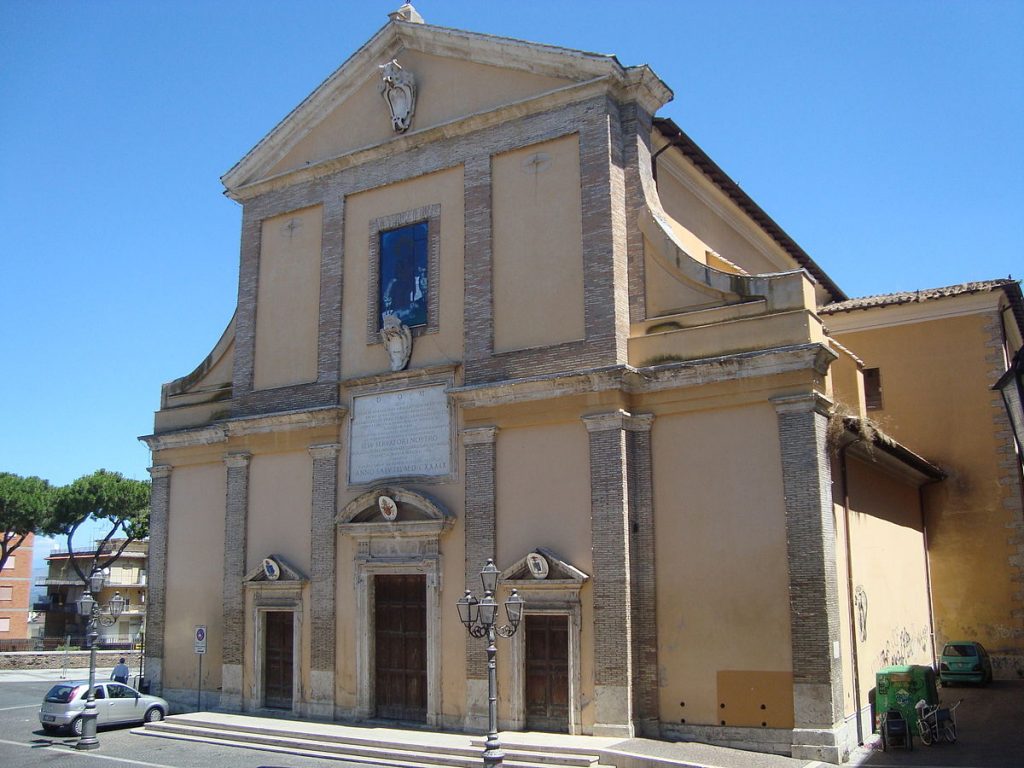 The Castle. The castle, considered by many to be the most important attraction in the city, is a beautiful fortress built in the early Middle Ages. Formerly used as a defense against barbarian invasions because of its strategic position, the castle has undergone various modifications over the centuries that have expanded its original core. Today it has become a landmark for tourists across Lake Garda, thanks to the beautiful panoramic view it offers: not for nothing do many consider it a “privileged terrace on Benaco”. In addition, on summer evenings the gardens and halls become an extraordinary place, suitable for exhibitions and cultural events. 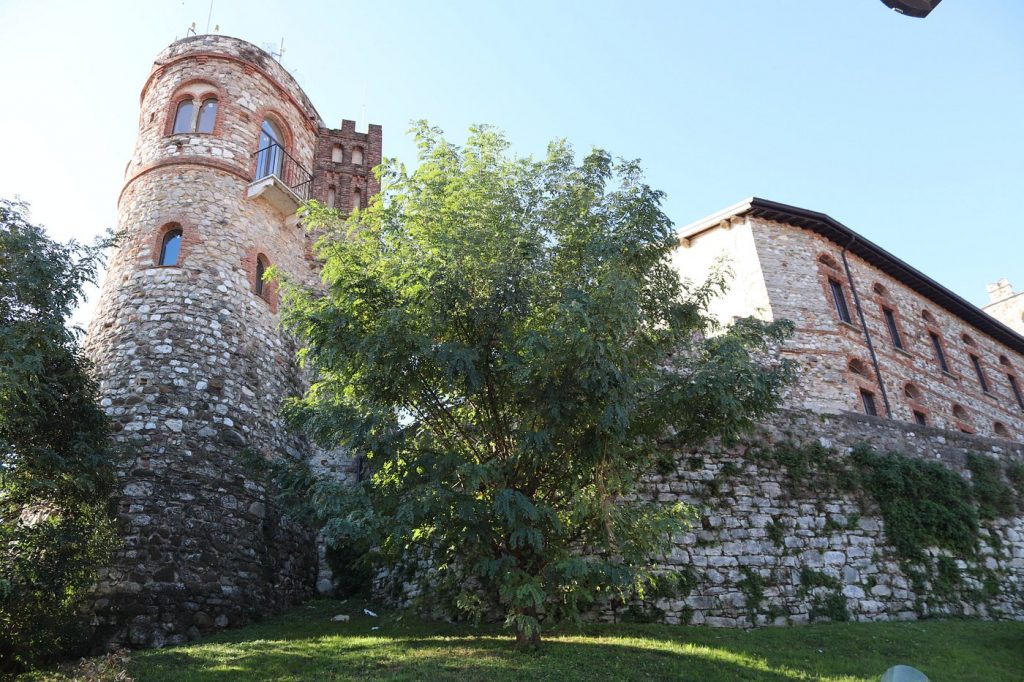 Piazza Malvezzi. It is the main town square, just a few steps from the lake. Built in the sixteenth century to a design by Giulio Todeschini (the same architect who built the cathedral), it is the heart of the historic center and is home to some important monuments, including the statue dedicated to the patron saint of the city, Santa Angela Merici. The square is a favorite meeting place for locals and tourists, who can choose to stroll under the arcades or relax in one of the many clubs in the center. It also hosts numerous events organized by the municipality.

Old Port. The port is one of the most attractive areas. Also from the medieval period, built in particular during the rule of the Republic of Venice in the 13th century, it was once used to transport food and goods, so that the town was nicknamed the “Lombard Warehouse”. Besides being a very beautiful area to admire with its lake scenery, it is nowadays quite popular for the numerous boats that accompany tourists on excursions along the shores of Lake Garda. If you leave the port for a boat trip, do not miss the unique Venetian-style bridge built there after the war. 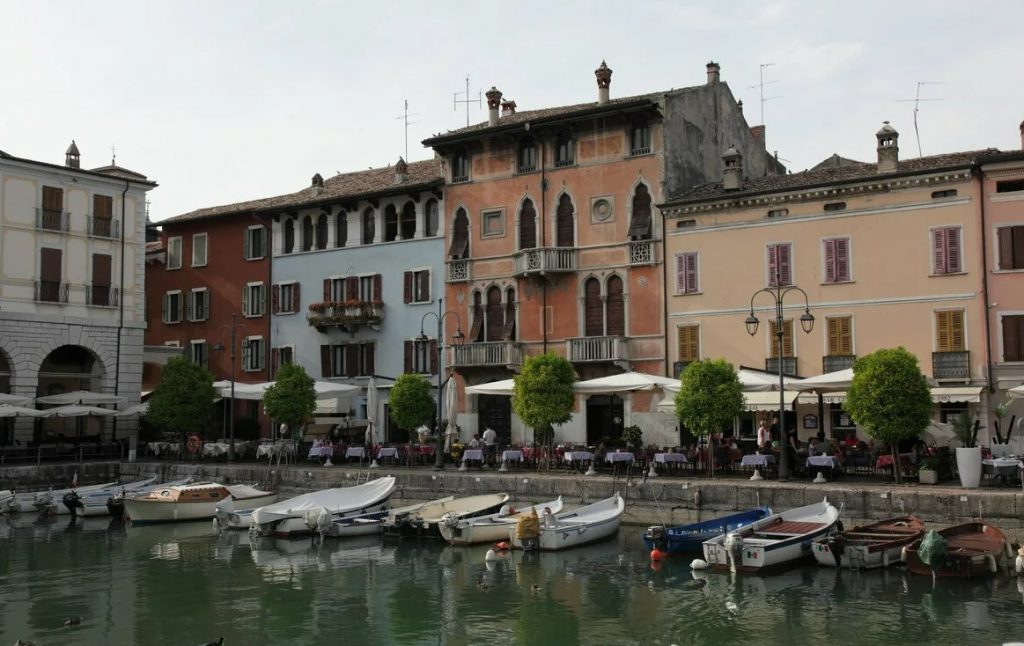 Roman Villa. Right after the panoramic castle, the Roman Villa is probably the second most important attraction that archaeology enthusiasts can’t help but love. The villa, located in the historic center of the city, was built at the end of the first century B.C. and today is considered one of the most significant late antique villas in all of northern Italy.

Besides the huge garden and the beautiful Antiquarium, the main treasure of the place is a polychrome mosaic of more than 240 square meters, depicting scenes of hunting and wild animals, as well as running chariots collecting cupids and satyrs. According to some research, it appears that the owner of the Roman villa was Flavius Magnus Decentius. In all likelihood, the name of the town of Desenzano came from this unique historical figure.

Archaeological Museum. The museum is named after Giovanni Rambotti. It preserves numerous artifacts found along the coasts south of Benaco that date back to prehistoric times (the finds in this museum are thought to date from the Paleolithic to the Bronze Age). The museum also houses none other than one of the oldest plows in the world, more than 2,000 years old. 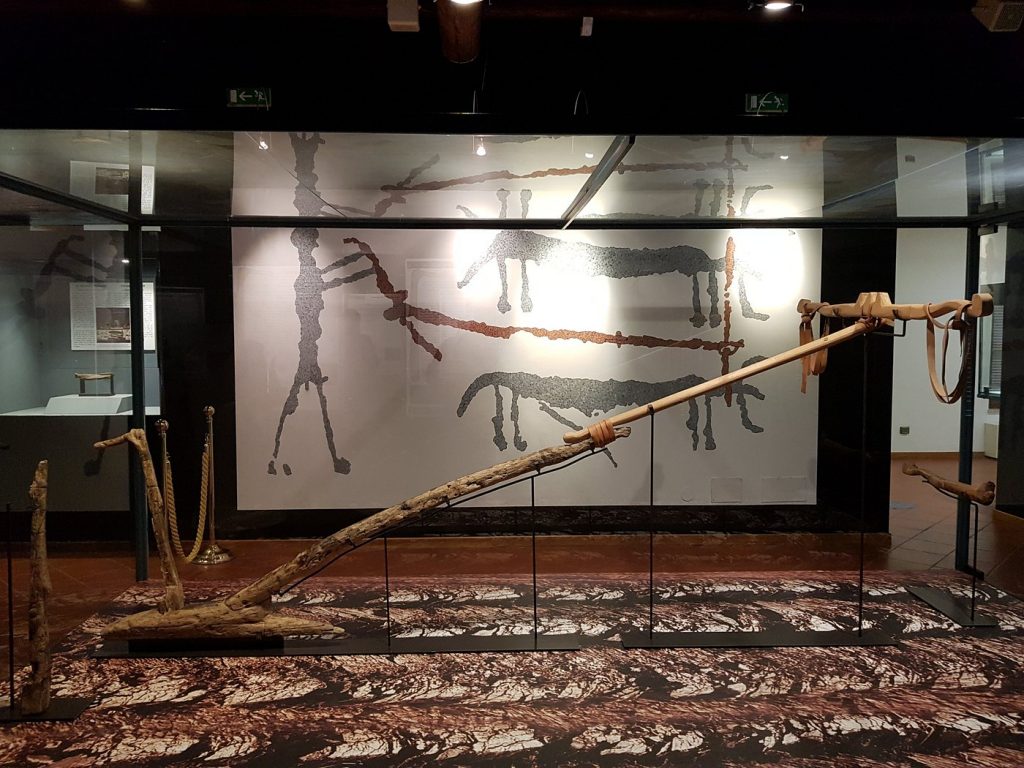 Take this opportunity to also visit the convent of the former monastery of the Carmelites, which houses the rooms of the museum: in fact, it is one of the most relaxing corners of the entire city.

Desenzano Lighthouse. Walking past the old port and entering the area of the later pier, one comes across a typically nautical structure: the lighthouse was built in the late 1800s. In its early years, the lighthouse worked thanks to a large oil lamp and the observation of an employee who lived a few steps from the port. Today, the lighthouse has all but lost its primary role, but it remains an incredible testament to the past for the most nostalgic, and also makes the port’s location even more appealing at sunset. 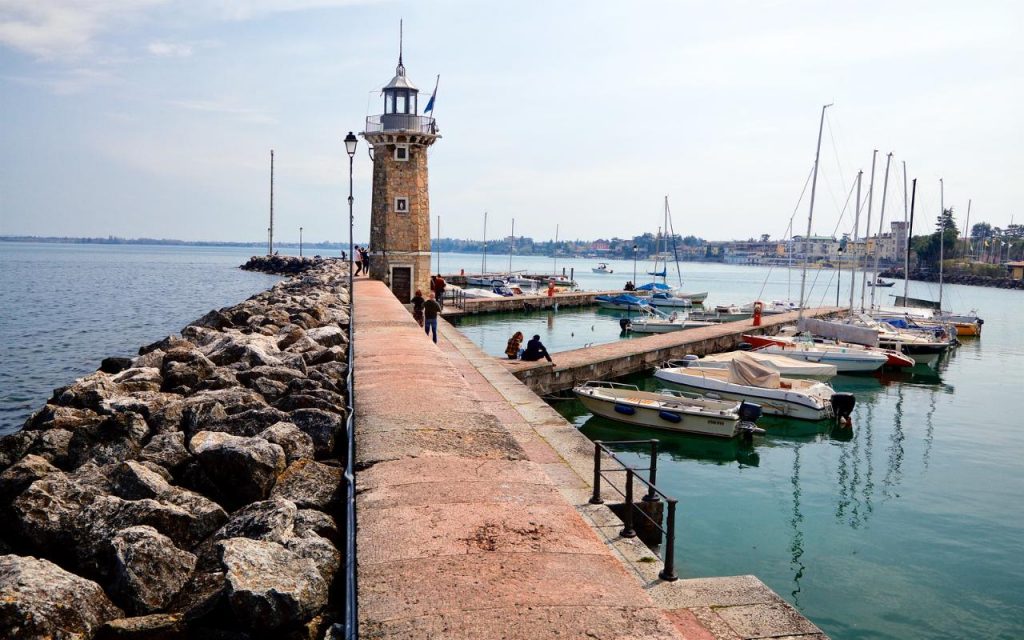 Park by the Pond. The park is another attraction that is important for you not to miss, especially if you are traveling with children. This small green area is essentially perfect for taking a break while strolling around the perimeter of the charming artificial lake, but also for fun: there are actually basketball courts, skateboarding paths, a playground to entertain the youngest and even a bar for parents. On weekends, athletes and families often have picnics on the lawn.

The beach of Desenzanino. A trip to Desenzano del Garda also includes a taste of the surrounding natural beauty and a little relaxation on the beach. Yes, on the lakeside not far from the town you will find four beaches where you can bask in the sun and have fun with friends: Desenzanino Beach, Feltrinelli Beach, Rivoltella Beach and Golden Beach. Given the proximity and the convenience of the service, it is recommended that you opt for Desenzanino Beach, a favorite of the locals themselves. Overlooking the beach you will find many bars and restaurants, and a large paid parking lot nearby will allow you to leave your car near the beach. 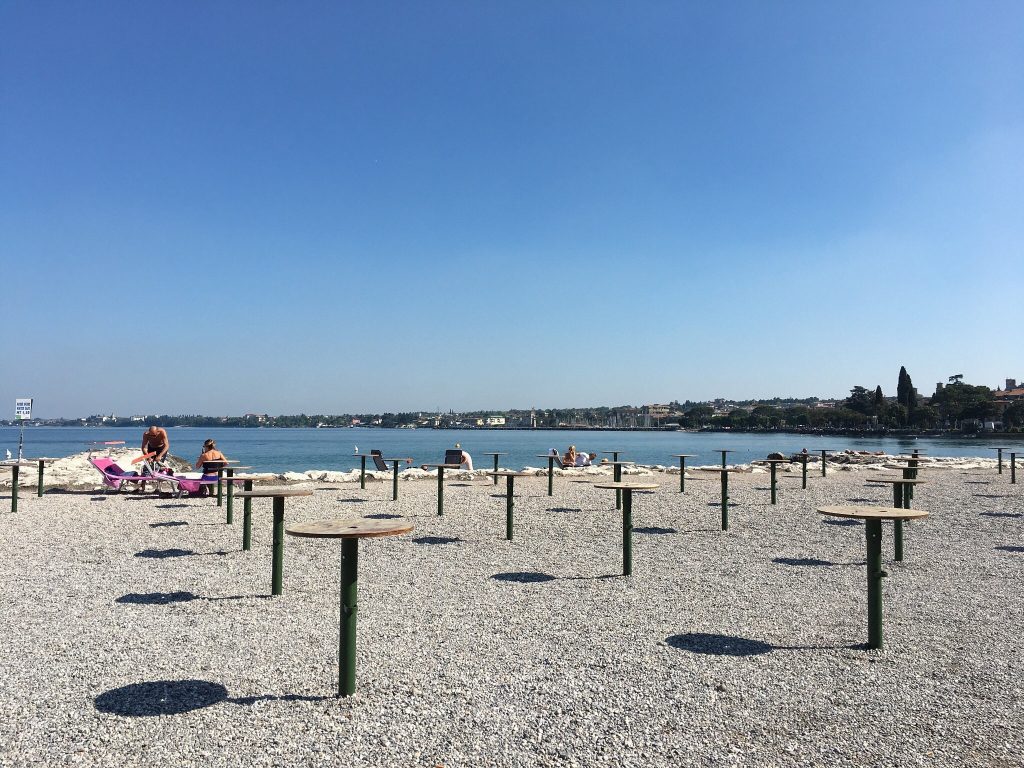 Oasis San Francesco. Continuing to talk about natural wonders, don’t miss this 10+ hectare oasis. For those who like to walk and be in close contact with nature, it is an ideal place, equipped with information panels, marked paths and an observation deck that can be accessed by a comfortable wooden walkway. 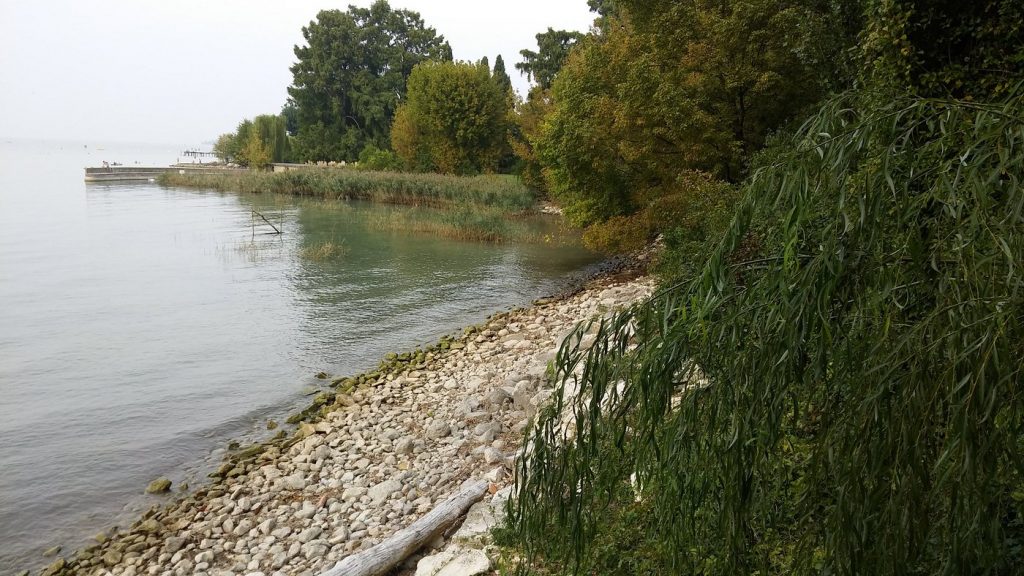 However, beware : since it is an area of great naturalistic and ecological value, it cannot be visited completely, but only in certain specified areas, in order to limit as much as possible the damage caused by human presence and thus preserve the integrity of its natural habitat.

2. Itinerary of Desenzano del Garda in one day

The itinerary can only begin with a good breakfast at the Riva Pastry Shop. After breakfast, walk to the nearby Desenzano Castle, where you can admire the most beautiful panoramic view of the surroundings. From the castle move to the heart of the historic center, Piazza Malvezzi. Here you can enjoy the relaxed atmosphere, stroll through the arcades and get lost in the alleys. A few steps from the square is the cathedral with its beautiful Baroque facade and Renaissance interiors. Pay attention to the passageways and discover Tiepolo’s “The Last Supper” painting. Finally, come to the closest Roman Villa.

For lunch, stop at Taverna del Garda, where you’ll enjoy gourmet dishes from the lake. After refreshing yourself, grab a coffee in Piazza Malvezzi to admire the picturesque Porto Vecchio and the beautiful Desenzano Lighthouse in the more modern port area.

Finally, head to Desenzanino Beach, where you can relax for the rest of the day (alternatively, you can visit Parco del Laguetto). Have dinner at Gattolardo, near the old port.