Actually, what else to travel in Denmark, but on a bicycle? The country is definitely a bicycle country in every sense, both terrain and infrastructure.

The idea for the trip was a continuation of a trip to Gotland last year, now the boys were more – three, 8, 9 and 9 years old, that is a bike trip geared for children.

The route we took, although with some deviations from the plan. In total, it was about 340km, but two sections (on the map in red) rode the train.

Flew Blue1 from Helsinki, bikes rented (here http://www.Cykelborsen.DK ). MTB with a luggage rack was not there, they gave out hybrids (?) 26″ with narrow tires and a bunch of speeds, and it’s for the best, mountain bike in Denmark is not needed, asphalt everywhere (well, except that on Mona there are special routes for mountain trails). However, you can normally ride a regular Citybike with three speeds, the more that it is twice cheaper than a hybrid and mountain bike. There are only 24-inch kids’ bikes, and they’re pink. We spent nights in camping in tents, cooked mainly there – in the morning in the evening, bought food in supermarkets. We found out by experience, that the cheapest supermarket chain is Aldi.

The first overnight stay was at the exit of Copenhagen on the road to Roskilde. Large, noisy and not cheap (3 tents, 3 adults 3 children – 500kron), but hot water without paying and the first trampoline on the playground, which immediately won the children. After that, camping without a trampoline didn’t rate at all.

READ
Top 10 the most beautiful small towns in Iowa, USA

For accommodation in the Danish campsites you need a camping card, I had it in 2007, and strangely enough, nobody took money for reissuing (180krons), they just put a fresh sticker on top and that’s it.

Mind you, as a rule, there are no dishes at Danish campsites.

Campgrounds . where we stayed: Absalon (Copenhagen) Odense (about 3km from the center on the highway to Svendborg) Svendborg/ Tasinge (after the big bridge to the left, hot water paid, beach, view of Svendborg, mini zoo) Bandholm (cozy little campsite with free water, 350 kroner for the same 3 tents, You can leave your tents and stuff after the checkout if you’re going to Knuthenborg safari park, and the owner gives 20% off coupons for that) Guldborg (not expensive, hot water for a fee, there’s a washing machine with dryer, but how to deal with it. . don’t know even the owners) MonKlint (expensive, hot water 8 crowns for 3 minutes, partly in the woods – and in this woods there are small mites, but an excellent children’s playground, two trampolines, pool, and the location – close to rocks) Praesto (small, water free, Koge Vallo – there are two campsites, Vallo is 100 meters farther, but cozier, under trees, with a bunch of playgrounds and two trampolines, water for a fee, but acceptable. In Copenhagen we stayed overnight at Bellahoj hostel, 739kron for a 6-bed room (linen to bring). Not too expensive, but a bit far from the center, you have to take the bus to the airport + subway.

Mon. White cliffs and blue sea, mysterious beech forest (what the hell with it, with ticks), fossilized tentacles and all sorts of fancy black quartz stones… And there is also a geocenter with excursions for children, a caramel factory near the island, and more and more… The day is not enough, we only walked around the forest and beach.

READ
Recreation in Makhachkala in summer

Re: Denmark by bicycle, Egeskov

Egeskov park on the island of Fyn, about 30km from Odense. You can spend a day here, it’s not only a castle, but also museums, a playground, a labyrinth, and a rope trail among the trees… It’s beautiful.

Knutheburg safari park on the island of Lolland, in the town of Bornholm. Also preferably a whole day, there are a lot of interesting things in the park itself, and plus a great playground. Distances in park are decent, entrance only by cars (and they can and to tigers, and to giraffes and wolves), and on bicycles (on dangerous animals only through fence…). The idea is great, you can pet donkeys, goats, camels and other peaceful wildlife. See lemurs, kangaroos and llamas without bars and cages. Feed the monkeys. And the playground (Smolland) is really something, with trampolines and a children’s climbing hill, a forest obstacle course, and rafting across the pond, in general, lots of things. Nearby is fast food, beer and ice cream, for unfortunate parents who can’t go climbing, but really want to.

We also went to the children’s science museum Experimentarium in Copenhagen, but by running. The museum is good, although the similar Eureka in Helsinki is better by the fact that it has a detailed explanation for each experience, and even in Russian. Here is English and Danish.

In Denmark, there are still a lot of interesting things (we were already in 2007 by car) – and Skagen, and Elsinore, and all of Jutland with its Legoland, the receding sea, the roaring ocean on the west coast… And there are a lot of cyclists here, in each campsite met several people with bicycles, with the same huge bike backpacks, and spread over them towels and T-shirts. Not a few with kids on their bikes and in carts either.

We rode the car two-kilometer (99kron in the bookstore), and I think I should have bought at least two bicycle cards. Seen in tourist offices and bookstores guides to individual regions with bike routes (explanations in Danish or English) for 130 kroner each (separately Funen, Zealand, and the southern islands). But there you can figure out a detour around the highway on quiet paths. We’ve been on the “daisy” a few times, it’s a great path, but very looping, when in a hurry need alternatives … All in all, Denmark is a cyclist’s paradise! Bicycle paths, bicycle parking lots – everywhere, stores with spare parts, bicycle service… Eh, we should be like that.

Will be in Copenhagen for two days on a motorhome with a 7 year old child. Looking for a campsite. I would be grateful if you could give some information on Absalon and Bellahoj Camping. Interested in the infrastructure and how to get to the center.

neolass wrote(a) on 10 Jul 2013, 2:30 pm: Will be in Copenhagen for two days on a motorhome with a 7 year old. Looking for a campsite. I would be grateful if you could give some information on Absalon and Bellahoj Camping. Interested in the infrastructure and how to get to the center.

How to get there will help you any map, or navigator. we used a map. I can’t remember Bellahoj, but we spent a night in Absalon. It’s about 10 km from the center, in the direction of Roskilde. Big, not very cozy, by the road, but showers, kitchen is ok. playground with trampoline for kids. about caravan services I don’t know, we were on bikes.

No, I don’t either…. So understand that many of the old reports do not look, very, very sorry, packed to Denmark and exactly on bikes

Fulfilled the dream of an idiot, and here comes the 50. In May, and only got to the pictures now. Denmark is a cyclist’s paradise, they are allowed everywhere and everything is flat. The hygge is really slightly noticeable. The Nordic country greeted with hellish heat and blue skies. It’s closer to the airport from Sweden than from Copenhagen. Wind turbines standing in the sea and waving. Lived with wonderful local people in the suburbs, for which I thank them very much. Drove across the famous bridge over the sea. I stayed in Christiania (I will write about it separately). Next are a few photos with captions. Two arseholes at the old royal castle. 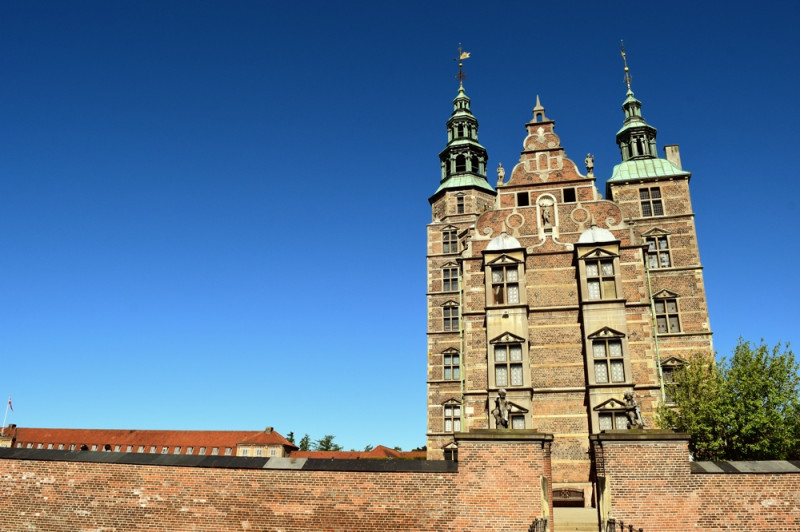 The castle itself. Modest. 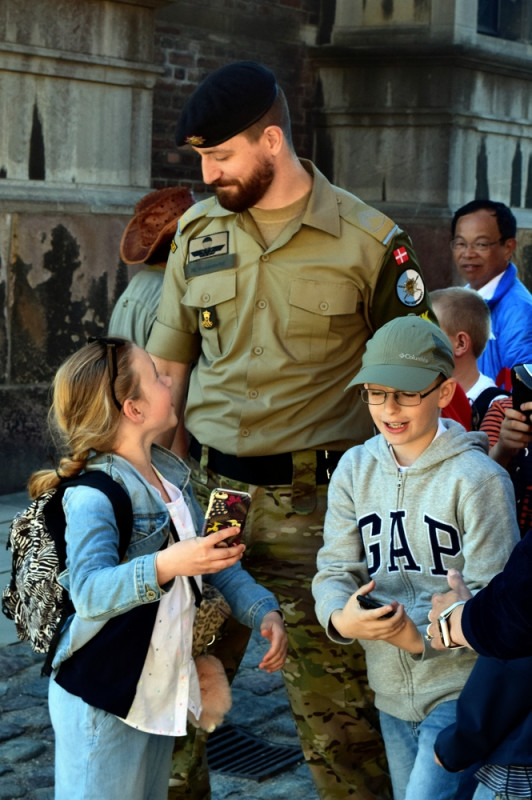 A soldier would not hurt a child. Although strictly speaking, it’s an officer. 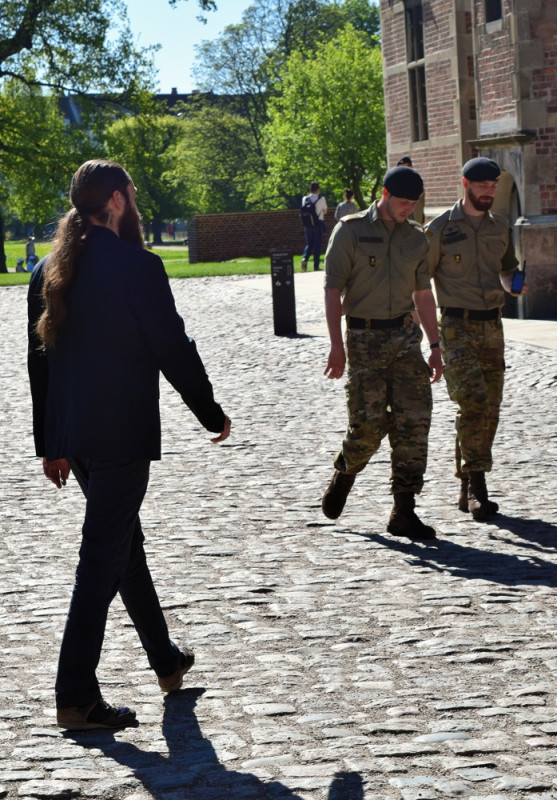 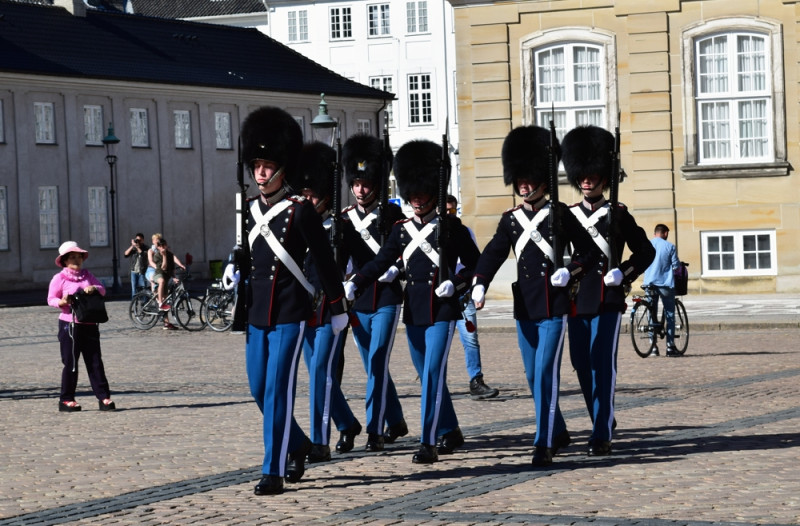 And here is the residence of the royal family and the changing of the guard.Danish parade clothes are identifiable by the blue pants. This is about what the soldier from the fairy tale “Ognivo” looked like when he went on parade. 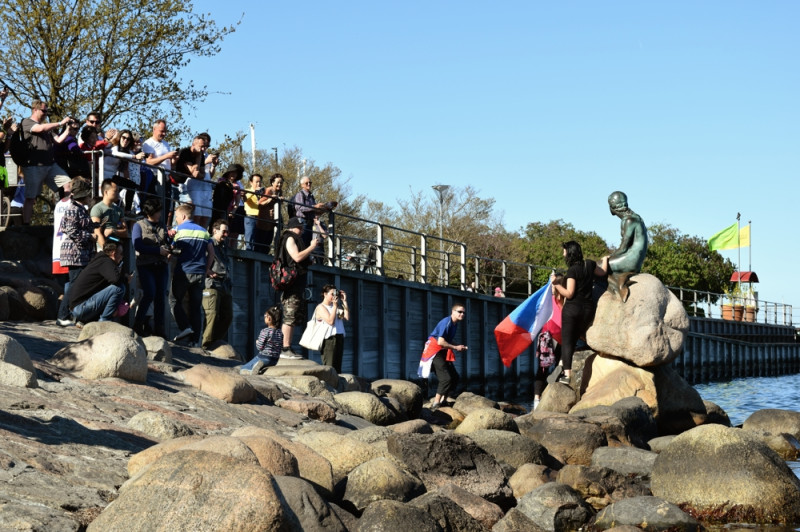 There is no shortage of Andersen’s footprints in the city, after all, he is the main Danish brand. Already everyone knows that the Little Mermaid is actually a small and unsightly monument, near which tourists are constantly rubbing shoulders. Dalo was also aggravated by the Ice Hockey World Championship, which was just held in Denmark. So the Little Mermaid was wrapped up in various flags one by one, especially the Czechs were zealous. 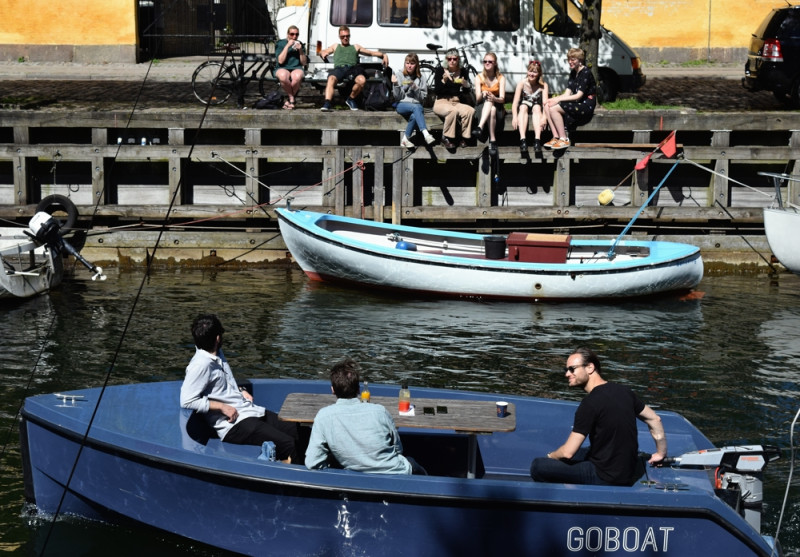 Copenhagen has a lot of water, it’s on an island. And there are a lot of canals. A lot of people live on them. Yachts galore and other watercraft. A typical scene – guys rented a motorboat and had a picnic, girls are sitting on the shore and staring. The spark, the storm, the madness. The kayaker tries to be as beautiful as the swan, it turns out average. 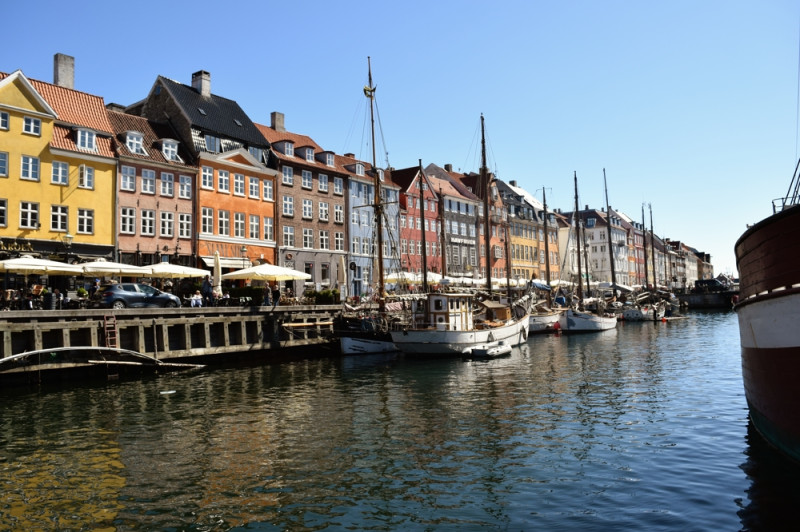 Copenhagen’s most famous and visited waterfront, King’s Harbor. Despite the crowds and the high cost, it’s safe to sneak onto some barge and sunbathe. 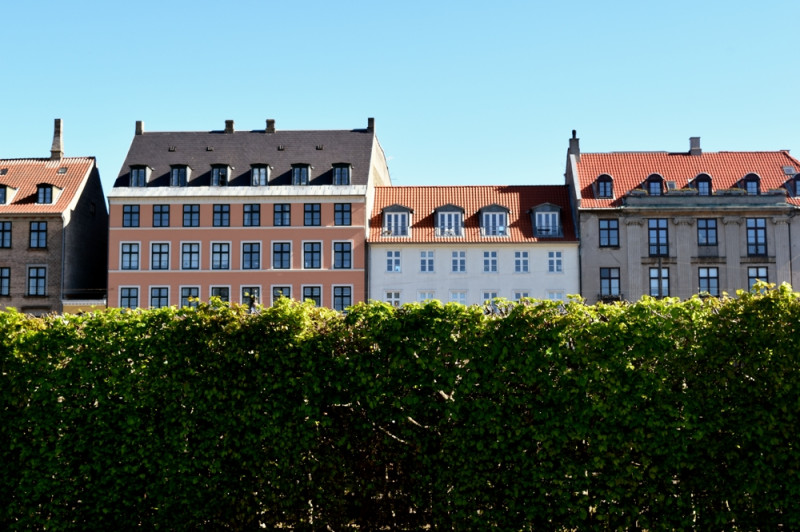 The architecture is quiet and pleasing to the eye. Fintyuly little, all solid, proportional, parallel and perpendicular. I even have this photo as wallpaper on my smartphone. 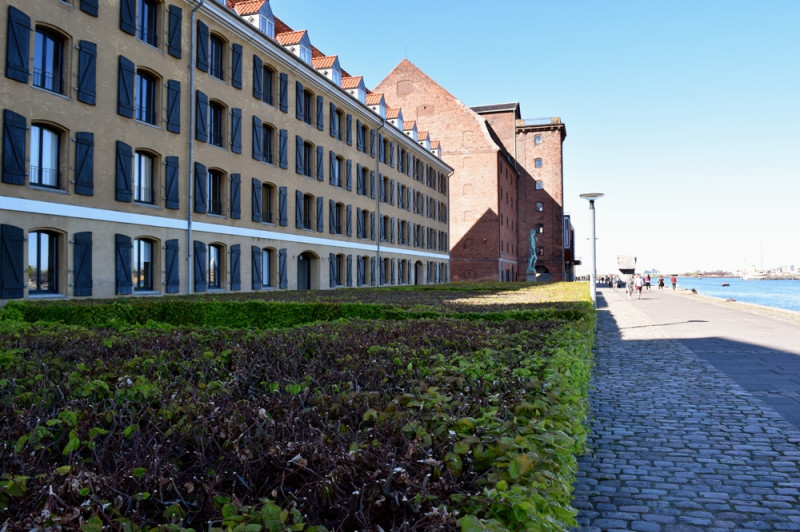 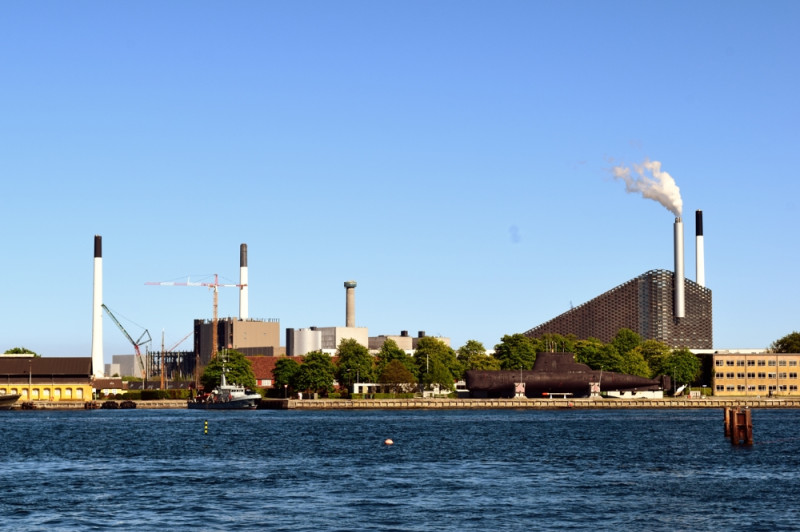 The surviving industrial sites within the city limits have long since been ennobled, too. It looks more like a loft. Find the submarine in the photo, it’s hiding there. 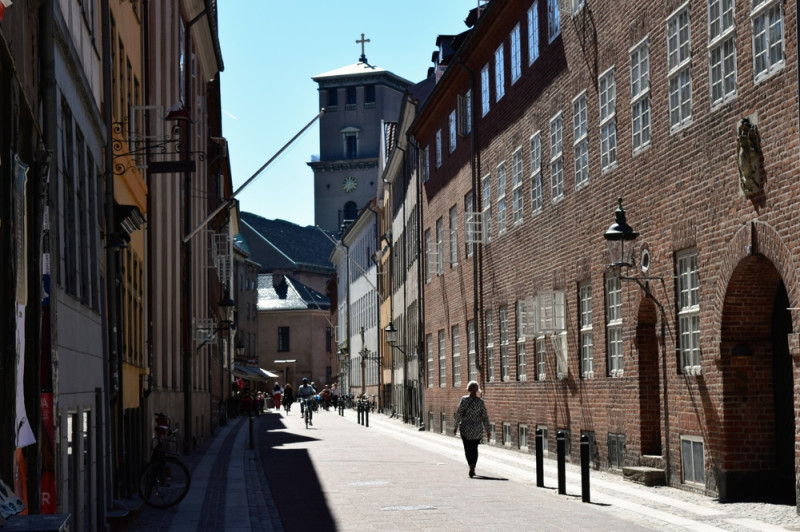 There was so much heat and light that I got a black tan. Sometimes it felt like it wasn’t Denmark, but Puglia, or even worse, Hong Kong. 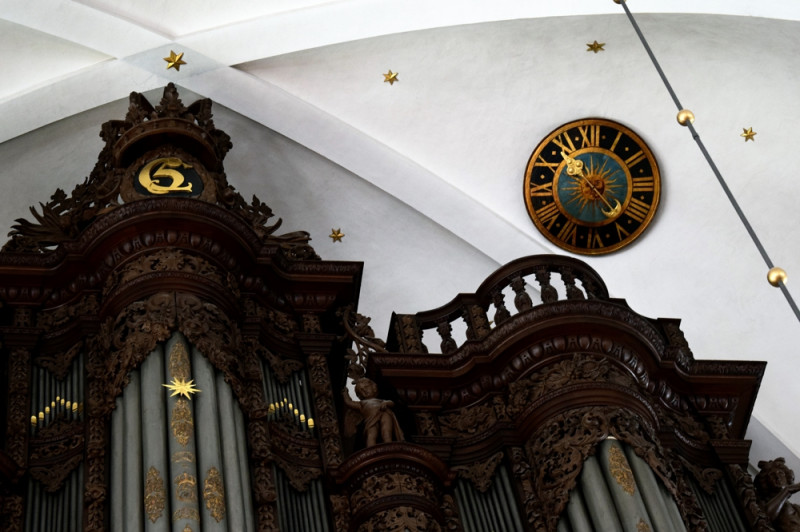 Despite the fact that Scandinavians and Protestants live here, the proximity to continental Europe is felt. The decor in the churches is relatively pretentious. 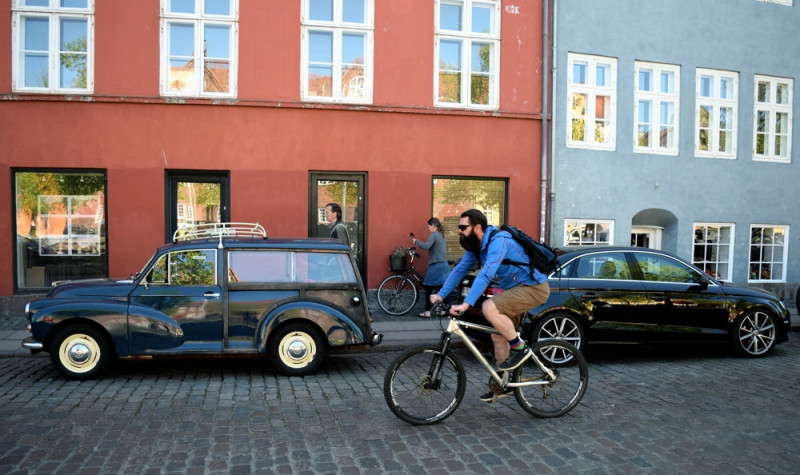 Did I mention that the bicycle is king of the road here? I wonder if I will come back here on two wheels someday. The photo shows two cars, both cool, but from different times, and what is coming to replace them in a separate country. 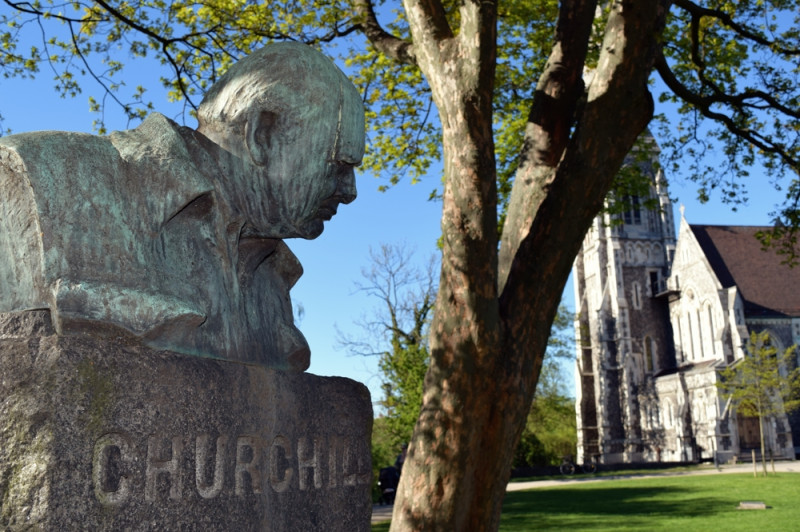 The Churchill Monument recalls how Denmark surrendered to the Germans in 4 hours, and then they were liberated long and hard at someone else’s expense. By the way, it was not liberated until May 9, the Nazis were here until the last. 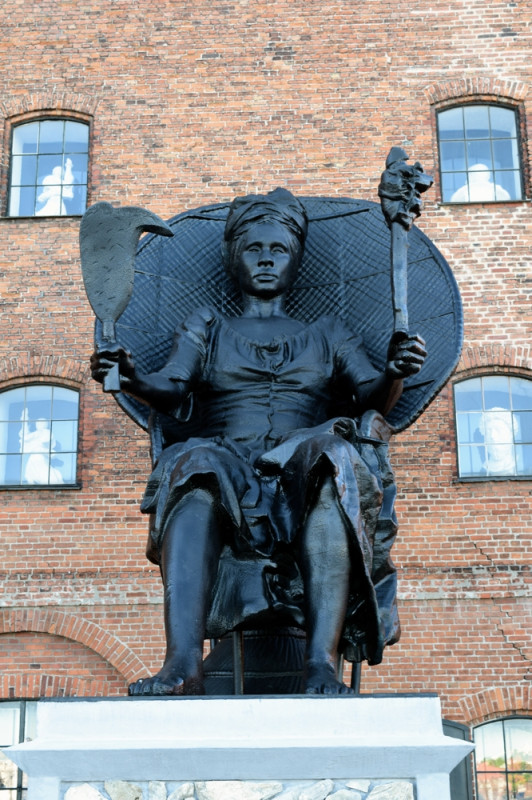 An interesting black woman in front of the museum. 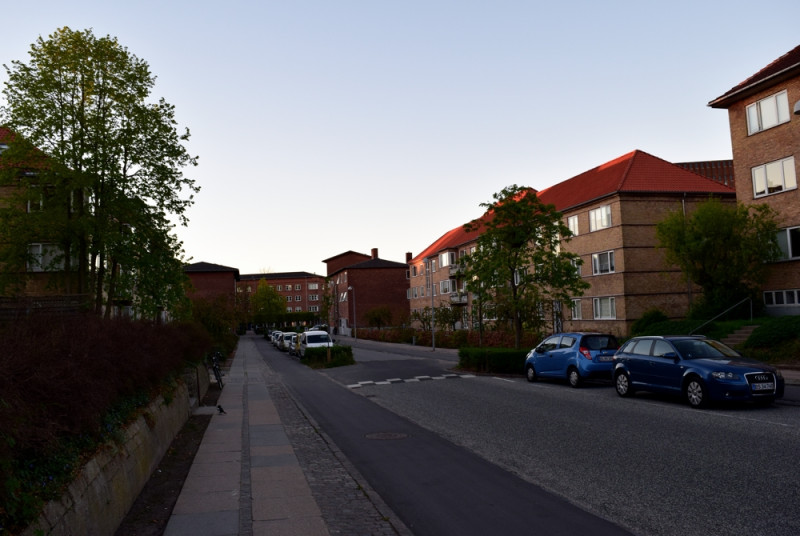 And this is the street where I lived. The suburbs in Copenhagen are as good as the center in terms of convenience and everything else. To spoil the impression, I’ll finish with some crooked selfies