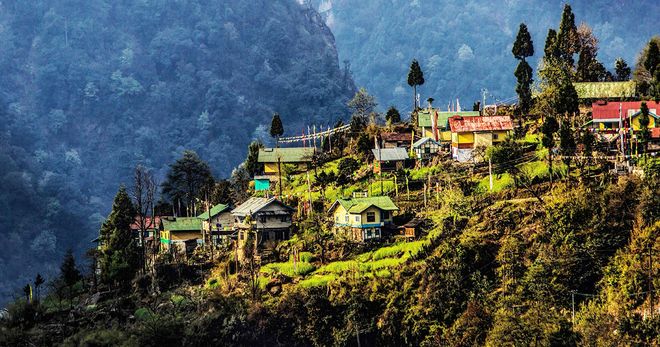 Darjeeling is an Indian city immersed in emerald green tea plantations and surrounded by the jagged white caps of the Himalayan Mountains. In addition to stunning scenery, it is famous for its colonial architecture, Buddhist monasteries, and a zoo that is home to snow leopards and red pandas. Darjeeling’s main attraction is the classic tea, which has gained popularity all over the world.

The city extends at an altitude of 2,050 m above sea level. A map of India shows that Darjeeling is located in the northern part of West Bengal, in the eastern part of the Himalayas. Its highest point is Mount Kanchenjunga, which reaches a height of 8,598 meters.

Darjeeling has a temperate climate divided into five seasons. In addition to the usual four, there is the monsoon season. The maximum temperature averages +14.9 ° C, the minimum – +8-9 ° C. During the year, the city receives 3,092 mm of precipitation. The wettest month is July. 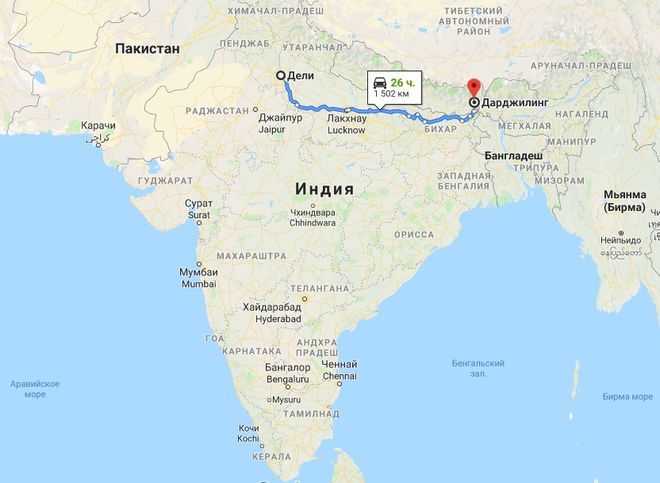 By the early 19th century, this hilly region was controlled by the kingdom of Sikkim. The neighboring flatter areas were ruled by Nepal. Darjeeling came to the attention of the East India Company in 1828, which decided to open a sanatorium there for its soldiers. In 1849 several of its employees were captured by Sikkim soldiers. This led to the fact that in 1850. 1,700 square kilometers of surrounding territory were forcibly appropriated by Britain. At the same time the town was granted the status of a municipality.

Industrial tea cultivation began in Darjeeling in 1856. It became the summer capital of the Bengal Presidency in 1964. In 1881 the Darjeeling Himalayan Railway opened, which helped in the development of the region. In 1899 the town was damaged by massive landslides.

Attractions and Entertainments in Darjeeling

The city is famous for its tea plantations and mesmerizing landscapes. Both can be seen from the observation deck located on Mount Tiger Hill (2,590 m). Every morning there is a line of jeeps lined up with tourists who want to watch the sunrise with a view of the Himalayas. For about $0.50 you can buy a seat in a gazebo or heated room.

READ
Afghanistan: why dangerous for tourists and what sights to see 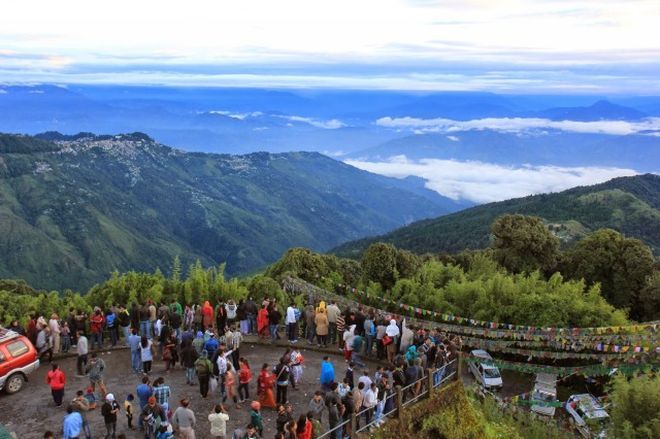 In addition to the mountain peaks, there are other sights to see while traveling to Darjeeling. Among them: 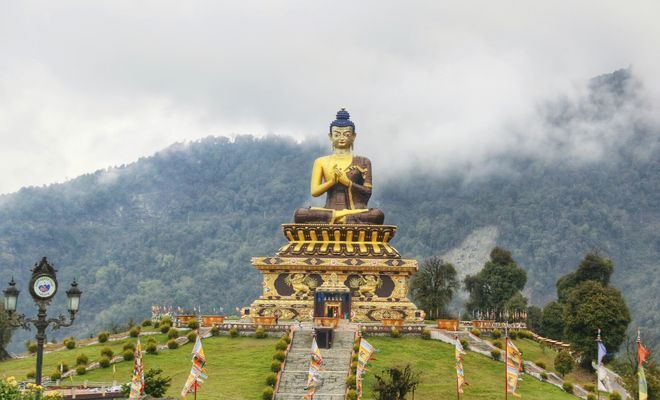 Many tourists go on a trip to Darjeeling to explore the local tea traditions. For this purpose, it is better to visit the Happy Valley tea plantation. The hot season here lasts from March to April. Some tourists even get to participate in the harvesting of tea leaves, watch the processing and then take them with them as a souvenir. 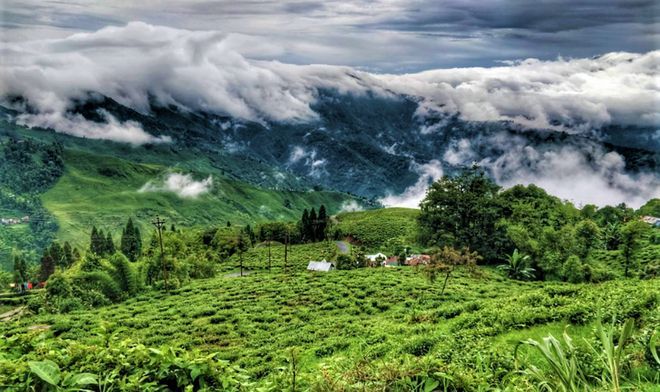 Tourism, in addition to the tea industry, is the main focus of the local economy. No wonder why it offers the most favorable conditions for travelers. Darjeeling is considered the largest tourist center of eastern India. There are more than 30 hotels in the city. The most popular among tourists are:

Some hotels are modern hotel complexes, while others are chalets and bungalows high in the mountains. The cost of lodging in them is $25 to $160. This may include breakfast, free Internet service, and parking. Many hotels in Darjeeling have a restaurant and a swimming pool. 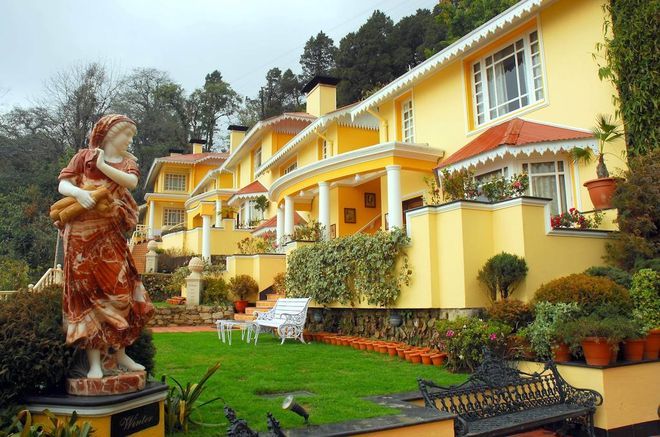 Traveling to this region provides a unique opportunity to explore the characteristics of Thai, Nepalese, Chinese and Indian cuisine. To do so, just visit the following restaurants in Darjeeling:

READ
11 things to see and do in Chelpancingo. Mexico

Other places worth checking out are House of Tea and Sunset Lounge. Here you can taste authentic black, white and green Darjeeling tea served with barley cakes, shortbread or pickle sandwiches. 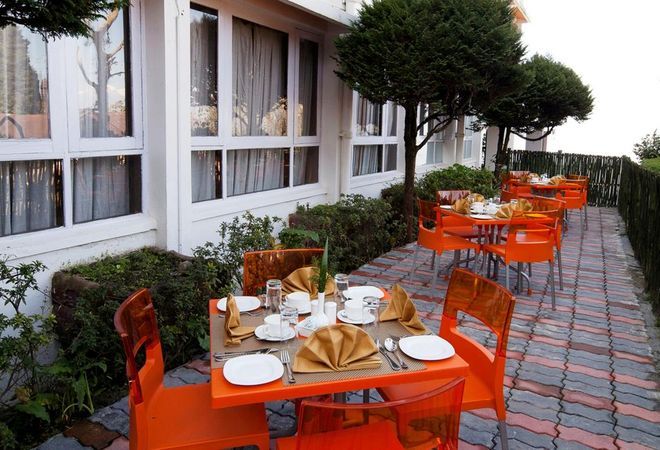 One of the main attractions in the city is the narrow-gauge railroad, opened in 1881. It is a UNESCO World Heritage Site and serves as the link between Siliguri and Darjeeling. Along the way it varies in elevation from 100 to 2,200 meters above sea level.

There are also intercity buses between Darjeeling and Siliguri. During landslides and monsoons, rail and road connections are interrupted. The nearest airport to the town is Bagdogra (90 km).

During a holiday in Darjeeling, one can use motorcycles, bicycles and cabs. Equally popular is the cable car, reconstructed and reopened in 2012. 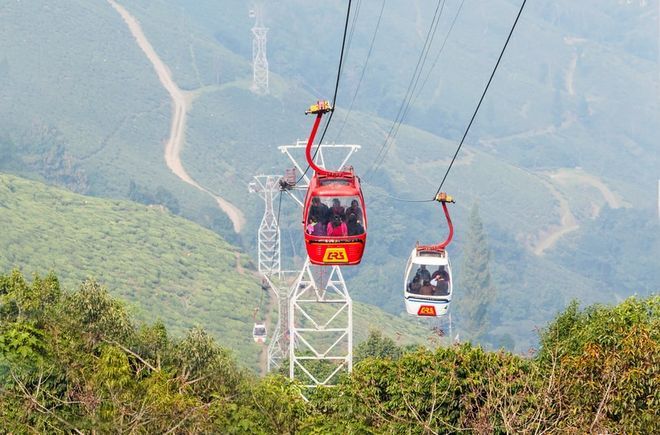 How to get to Darjeeling?

The city is located in the northeast of the country about 1,500 kilometers from Delhi. Tourists who do not know how to reach Darjeeling can take any convenient transportation. AirAsia, IndiaSpiceJet, and IndiGo operate flights between it and the capital. Their planes fly 9-10 times a day and spend about 4 hours en route. A round-trip ticket costs about $96.

Buses #14056 and 52541 leave from the capital’s Delhi Raleigh station and arrive in Darjeeling in almost 42 hours. By car, it takes 26 hours to reach Darjeeling. To do so, you have to drive east on the NH27 road.

When they say “Darjeeling”, it’s immediately clear that they’re talking about tea, and it’s quite well deserved, I must say. Darjeeling, in the Indian state of West Bengal, is home to one of the world’s most aromatic teas. A rare combination of soil characteristics, altitude, sunshine, rainfall and the mentality of the people who live here have given birth to the unique flavour of Darjeeling tea.

READ
Agrigento: an Italian city in the region of Sicily

Darjeeling tea is born in the foothills of the Himalayas in the shadow of the world’s third highest mountain, Kanchenjinga. Darjeeling is an area located in West Bengal in northeastern India. It borders Tibet, Nepal and Bhutan. Situated between 1,800 and 2,500 meters above sea level, it was almost unpopulated until 1816 when Britain wrested it from Nepal and turned it into a health resort for its troops. Soldiers and officers came to the sanatoriums built there, where the cool, salubrious mountain air helped them regain their battle-ravaged health.

Around 1834 Lord William Bentinck set up a committee “to determine the question of importing seeds and saplings from China and determining the most favorable places for their cultivation. As early as 1835, tea seeds and saplings were delivered to various parts of India, mostly to the highlands of the country.

In 1835 the Darjeeling region was given to the East India Company. Dr. A. Campbell – Darjeeling’s first superintendent – experimented extensively with planting tea seeds, and as early as 1847 the government began growing tea for commercial purposes. At this time the area continued to be very sparsely populated, so workers were hired from Nepal to tend and harvest the tea. 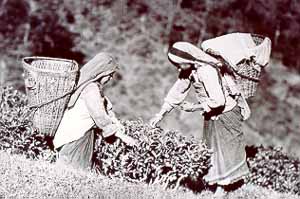 This is how tea was harvested in Darjeeling in the early 20th century.

The experimental acclimatization of Chinese samples in Lebong (not far from Darjeeling town) was surprisingly successful. This success inspired future tea planters to develop the surrounding land. The first “tea gardens” in Darjeeling were Macaibari and Alubari. After some time Tukwar, Mundakotkhi, Duteriyah and Margatets Hope were added to them.

READ
5 things to do in Calella, Spain

By 1866, Darjeeling had 39 tea estates totaling 405 hectares, yielding 21 tons of tea a year. By 1870 the number had grown to 56 plantations producing a combined 71 tonnes of tea and covering an area of 4,400 hectares. At this time, tea production in Darjeeling became a lucrative business.

Mr. Dablue O’Brian Ensel, as a highly accomplished engineer, laid the technological foundations of tea production in Darjeeling . He was the first in India to use mechanical devices for rolling the tea leaves and sorting tea. However, the Darjeeling tea harvest was and still is exclusively by hand. In addition, Mr. Dablue designed a hydroelectric scheme to electrify Darjeeling and directed projects to install turbines on many of the tea plantations in the area. By 1872, these measures resulted in Darjeeling tea’s appearance and well-deserved recognition in London’s salons. 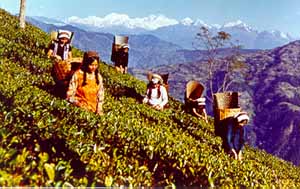 Darjeeling harvest in the mid-1970s

After the overthrow of colonial rule in 1947, many British owners, who at the time owned about 90% of all tea land in Darjeeling, began to dispose of property in India.

By 1956, a large number of tea estates had changed hands. It was not easy for inexperienced young Indian planters to withstand the fierce competition of tea auctions, which required constant and continuous improvement of tea production standards. Darjeeling tea production owes much to several European planters such as Mr. C. Dablue Emmett and Mr. T.J. Hardingham who came back and helped get Darjeeling tea back on its feet.

The Crisis and Revival of Darjeeling

By 1960, many plantations had been replanted. By 1966, the Tea Research Association opened a cloning research station where the best plants were selected to improve the qualities of the Darjeeling plantations. By the late 1970s, almost all of the plantations had been bought from Britain by the Indians, who had long and successfully managed them.

READ
Makarska and its surroundings

By 1980, the fashion for Darjeeling outside India had waned. Chinese teas were gaining popularity as they made their way onto the global market. In India itself, Darjeeling tea had always been less popular among the masses than the same Assam. As a result of financial problems, several plantations went bankrupt and some tea gardens died.

By the end of the 1990s, Darjeeling was recalled and the global interest in this tea increased again. 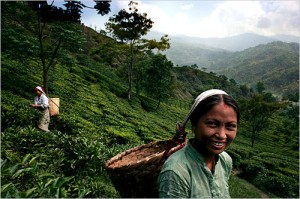 Today, Darjeeling has 86 tea estates spread over seven valleys that produce 10 million kilograms of tea annually, only 1% of India’s tea production, with a total acreage of 19,000 hectares.

Nearly 70% of the plantations produce tea that has received the international certificate “Organic”, which means that no chemical fertilizers or pesticides are used. Such world renowned institutes as IMO (Switzerland), Demeter`s certification (Germany), India Organic and USDA have recognized the highest quality of Darjeeling tea.