A Walk Around Old Damascus

Damascus is if not the oldest city on earth, then it is the oldest place with an unbroken tradition of inhabitation. Its history goes so deep that even ancient historians could not pinpoint the exact time when the city was founded. There have been numerous archaeological excavations in Damascus and wherever researchers have worked, they have found traces of habitation everywhere. The oldest cultural layer discovered so far dates back to the Neolithic period, which means it is over 7000 years old.

The most notable monuments of the ancient history of Damascus are the fortifications, the citadel, the Umayyad Mosque and the old city. There were ten doors leading to it that were built during Roman rule and once bore the names of the heavenly luminaries. The gates shared the fate of the fortifications of the old city: some were destroyed, others were laid down and were no longer used for their intended purpose. Eight of the gates are now extant in full or in fragments. Four (Bab al-Faraj, Bab al-Faradis, Bab al-Salam, Bab Touma) face north, two (Bab Qisan and Bab al-Saghir) face south, Bab al-Sharqi faces east, and Bab al-Jabiya faces west.

In a new interactive project, Warspot outlines the major milestones in the history of this fascinating city, describes the ancient citadel and the Umayyad mosque, and shows what the gates that led pilgrims, traders and conquerors to Damascus look like today.

To read about the history of Damascus, click on the corresponding button. The markers indicate the citadel, the Umayyad Mosque, the city walls, and the gateway to them. 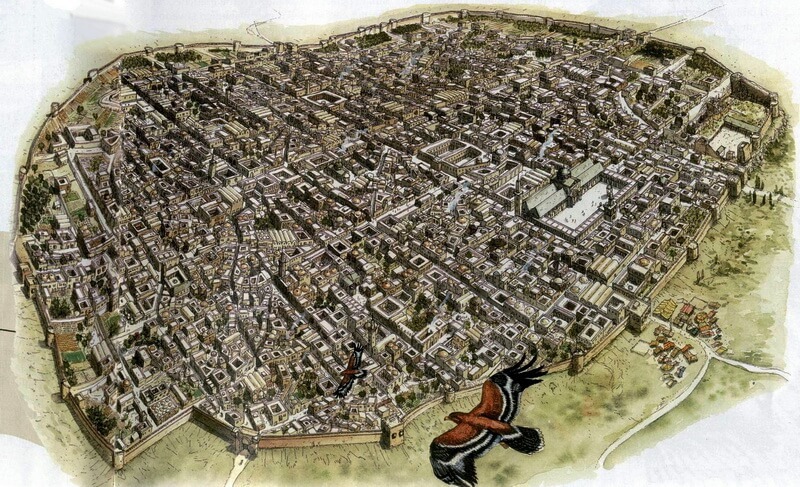 Damascus is first mentioned in Egyptian documents under 1468 BC. At the beginning of the first millennium BC the city was the political center of the Aramean kingdom, whose borders covered the whole of Syria. In 732 BC. Damascus was destroyed by the Assyrians and then possessed by the Babylonians and Persians. In 332 BC, the city opened its gates to the army of Alexander the Great. After the collapse of his empire, Damascus passed under the rule of the Seleucids in Syria. In 64 BC, the Romans were its new masters. Under their rule, Damascus grew rich and was actively rebuilt. A citadel, an aqueduct, and the largest temple of Jupiter in Syria were built there.

In 636 Damascus opened its gates to Arab-Muslims. The first governor of the city, Muawiya ibn Safyan, became caliph in 658 and founded the Umayyad dynasty. Under their rule Damascus experienced its Golden Age. During this time the most magnificent buildings were erected in the city, including the caliph’s palace and the famous mosque. The new Abbasid dynasty moved the capital of the caliphate to Baghdad and Damascus lost its former importance. Power over it passed to the rulers of Egypt and then to the Seljuk Turks. Three times the city tried to besiege the Crusaders. In 1174, the famous ruler and commander Salah ad-Din united Syria and Egypt under his rule, and made Damascus the capital of the state. During the reign of his descendants from the Ayyubid dynasty, the city flourished again. Trade and crafts were developed and the gunsmiths who discovered the secret of the famous Damascus steel were especially famous.

Damascus from a bird’s eye view, view from the northeastern side of the city to the southwest

In 1260 a great damage to the city was caused by the Mongol invasion. Forty years later, the Mongols returned and burned the city again, and in 1400 Tamerlane literally razed it to the ground. When Syria was conquered by the Turkish sultan Selim I in 1516, the city was still in ruins. Damascus was reborn under the Ottomans. Thanks to the revitalized trade, there were 17 large markets and 57 caravanserais. Damascus has long been a destination for pilgrims of different religions. Their ways partly determined the geography of the streets of the modern city.

During the First World War, Damascus was the base of the Turkish and German troops operating in Syria. In 1919, the creation of an independent Syria was proclaimed here, but in fact the country was ruled by the French colonial administration, which ruthlessly suppressed the rebellions of the local population. The country gained its full independence only in 1946.

READ
Concrete jungle - the most urbanized countries in the world

The Damascus Citadel is situated in the northwest corner of the city’s fortifications on the left bank of the Barada River (the model is shown so that the observer looks at the city from the northeast). In ancient times there was a small hill on which the first citadel was built by the Seleucids. Later the Romans rebuilt and enlarged it. The citadel acquired its present appearance in 1216, when Salah ad-Din’s brother, Sultan Malik Adil, renovated the walls damaged by a major earthquake and built 13 new towers on their perimeter. 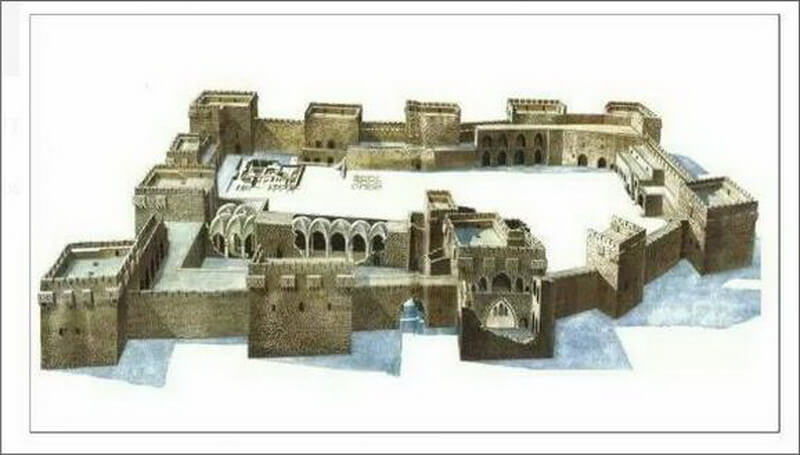 On completion, the citadel was the most powerful fortification of its day. It was rebuilt again after the Mongol invasions and especially after the defeat of Tamerlane. During the Ottoman rule the fortifications lost their defensive purpose and were used as a prison. In 1986 the prisoners were transferred to other prisons, and the citadel was handed over to the restorers. Restoration work continues for more than two decades, and during this time the citadel is closed to tourists.

Today the walls of a citadel rise on 15 m in height, and their thickness reaches 6 m. On the upper tier there is an open gallery with loopholes for archers. The towers have several tiers of combat galleries, and the upper ground is designed for throwing machines. The fortifications are particularly strong on the north side, along the course of the Barada, where the main gate of the citadel is located. Access to the gateway on the right side is flanked by a huge tower. Its masonry consists of massive rectangular blocks, each weighing several tons.