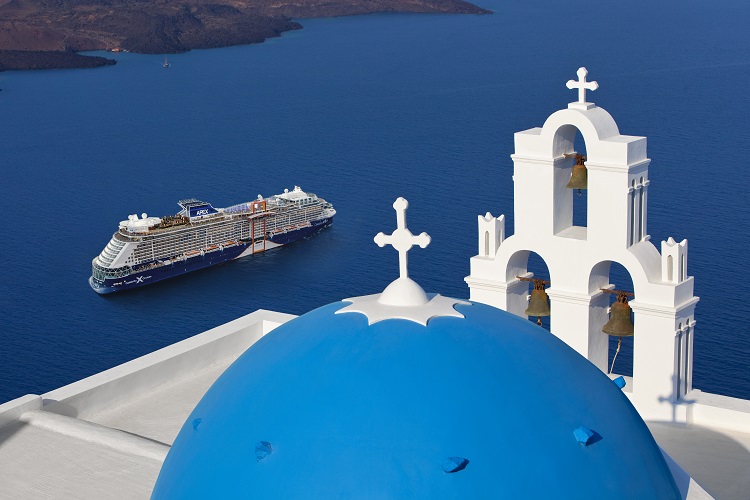 Cruises to the Greek Islands are a return to where modern civilization began. Looking at the small rocky islands with beautiful names, it’s hard to believe. But when you find out that behind every little piece of land, where your liner is moored, there is a thousand years of history, you begin to see the Greek Islands through entirely different eyes.

Here are the Cyclades and the island Delos, where Apollo and his sister Artemis were born. Here is Syros, one of the centers of the mysterious Minoan civilization. The island of Rhodes, where stood a giant statue of the sun god Helios – one of the Seven Wonders of the Ancient World. Cyprus is the third largest island in the Mediterranean Sea, the place where Aphrodite, goddess of love, was born from the foam of the sea. Athens – the cradle of democracy and the capital of modern Greece. And then there are calls to Israel, the ports of Haifa and Ashdod, where you’ll find Jerusalem and Bethlehem. Cruises to the Greek Islands and the Eastern Mediterranean are a journey unto themselves, for our entire culture came out of a bizarre interweaving of Hellenic and Jewish civilization. As Borges said, “If we belong to Western civilization, we are all Hellenes and Jews, despite many adventures of blood.

Greek island cruises from Ephesus and Istanbul – ALL INCLUDED!

Sputnik-V is accepted! Comfortable flights to Istanbul and Izmir from Moscow, St. Petersburg and Sochi

Maximal intensity route ● Russian-speaking crew ● All inclusive with and without alcohol ● All taxes and fees included! All taxes included! Cruises from Ephesus and Istanbul 4,5 or 8 days ● Afternoon and evening anchorages on Mykonos and Santorini ● Shore leave by yourself! ● 2 excursions included!

READ
Peculiarities of life in Egypt - what should you be prepared for?

Cruises to the Greek Islands from Athens – ALL INCLUDED!

Maximum intensive route ● Russian-speaking crew ● All inclusive with and without alcohol ● All taxes and fees included! All taxes included! Cruises from Athens for 4, 5, or 8 days ● Afternoons in Mykonos and Santorini from early morning till late at night ● Shore leave by yourself! Two excursions included!

Cruises from Athens to the Greek Islands on MSC Lirica 3*.

Cruises from Rome on Celebrity Beyond 5* LUX NEW

Cruises to the Greek Islands from Athens start from the port of Piraeus (a suburb of the Greek capital). Direct flights from Moscow to Athens are operated daily by Aeroflot and Aegean Airlines. Travel time to Athens is about 3.5 hours.

What to see on a cruise around the Greek Islands?

Athens is first and foremost the Acropolis, the heart of the city, the place where philosophers and military leaders, distinguished Athenians and ambassadors from other nations gathered. Here stands the main temple of the city – the Parthenon. At the foot of the Acropolis, on the Areopagus hill, preached the Apostle Paul. And not far from the Acropolis the main Athenian square – Syntagma and the Presidential Palace. Here you must see the changing of the guard. Besides that Athens has preserved the villa of archaeologist Schliemann, the “beautiful marble” stadium where in 1896 the first modern Olympic Games were held, and much more.

The island of Santorini is interesting because here one and a half thousand years ago the largest volcanic eruption in the ancient world occurred. Santorini did not just explode – the eruption was so strong that the ash flew to Australia. Some historians believe that the “Egyptian executions” are a consequence of the eruption of Santorini. Whether this is true or not, it is difficult to say, but if you look at modern Santorini from the air, you can clearly see the caldera of the extinct volcano. It is now surrounded by not one but five islands. Santorini is the largest of them. Its coastline rises a sheer wall, which, like a slice of cake with filling, you can see the layers of volcanic ash deposited in these places. And all of Santorini’s life takes place on top of the island. There’s plenty to see: the monastery of Elijah the Prophet and the ruins of the Minoan city at Cape Akrotiri. And much more. And do not forget to buy Vinsanto, the local wine. Thanks to a unique production technology, it has a great taste!

The island of Delos is one of the most famous in the Cyclades. The ruins of temples and houses, the remains of mosaics and squares – from ancient times Delos was a sacred place for the Greeks, because here Leto, the beloved of Zeus, gave birth to Apollo, the goddess of art and light, and Artemis, the goddess of hunting. It happened on Mount Kinff – the highest point of Delos. Therefore, Apollo and Artemis were dedicated several temples, the ruins of which have survived to this day. And with them the remains of residences, fountains and a stadium. During its very long history Delos passed from hand to hand, and each time the new masters of the island built temples to their gods. Thus, on Delos, there are shrines to the Syrian and Egyptian gods, for example. In antiquity and the Middle Ages Delos was one of the key ports of the region, but now only small ships can dock here. 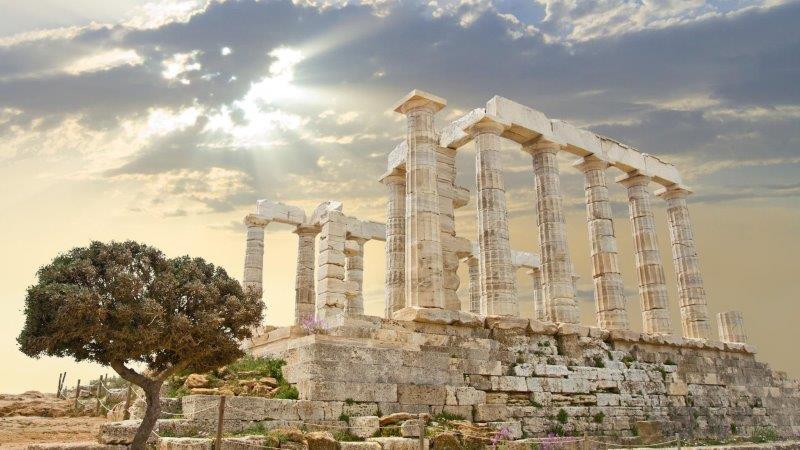 The island of Cyprus . It is believed that the first settlements appeared in this paradise place in the 9th millennium BC. Since then, this ancient land has welcomed Greeks and Latins, Byzantines and Knights Templar. One of the main attractions of Cyprus is the city of Paphos. It is included in the list of world cultural heritage of UNESCO. In addition, near Pafos there is the bay where Aphrodite, the goddess of love, emerged from the foam of the sea. Cyprus sights are a mix of different times: there are ancient cities and temples, the Byzantine castle of Kolossi, where the Emperor of Cyprus Isaac Komnenus hid from the Crusaders, and the church, where Richard the Lionheart married Princess Berengaria of Navarre.

The island of Rhodes is one of the most legendary places in Greece. Rhodes, named after the nymph, the lover of the sun god Helios. In ancient times, Rhodes was one of the most important cultural and administrative centers. It had its own school of sculpture, here lived writers and poets, scientists and statesmen. In the Middle Ages the knights-hospitallers built a fortress here, which survives to this day. A tour around Rhodes is an opportunity to trace the history of the island from ancient times to the Middle Ages and today. See how one civilization replaced another, leaving behind columns and palaces, temples and impregnable fortresses. After all, in the end, everything passes, only the memory remains. And art, which is eternal.

READ
10 things to do in Birmingham in a day, UK

The island of Folegandros 66°33′44″ is another jewel of the Cyclades. Thanks to its small size, with only 700 people living on Folegandros, with an area of 32,000 square kilometers, this island offers the opportunity to look behind the facade of Greece with its large, beautiful temples and palaces. In fact, be in a village. Moreover, the village of Chora was listed in 2013 as one of the seven most beautiful villages in Europe! Also, there is a lighthouse and the Church of the Virgin Mary, the Stalactite Cave and the Folklore Museum on Folegandros.

Jerusalem is one of the key ports on eastern Mediterranean cruises. And in general, one of the main cities of world civilization. The old streets and temples of the city, the Wailing Wall and Golgotha – everything that is the foundation of modern culture – everything is here, in this small piece of land. It makes you think that it is not Rome that is truly eternal, but Jerusalem. It is no coincidence that thousands of pilgrims and tourists come here every year.

Bethlehem, the main attraction of which is the Cave of the Nativity, is located just 10 kilometers from Jerusalem. The first references to this place go back to the 14th century BC. Of course the main attractions here are the Christian shrines, basilicas and cathedrals, but there are also Old Testament sites, such as wells of King David, which, according to legend, brought water to King David three of his brave soldiers during the battle with the Philistines.

Nazareth is the third most important city after Bethlehem and Jerusalem. In modern Nazareth there is the Grotto of the Annunciation, above which is built the largest Catholic Basilica of the Annunciation in the Middle East. There are other Christian churches in the city, built at different times. The area around Nazareth is also worth seeing: there’s Mount Descent, where, according to Catholic tradition, the people of Nazareth sought to depose Jesus after his sermon in the Nazareth synagogue; the national park of Sepphoris; Mount Tabor, the mountain of Transfiguration; and Kfar Kana east of Nazareth, where Christ performed his first miracle by turning water into wine at his wedding.

This is by no means a complete list of sights to see while cruising the Greek Islands and the Eastern Mediterranean. Every traveler will find something to his or her liking. History buffs will find temples and impregnable strongholds, believers can pray and vacationers can bask in the beauty of the beaches! However, it is possible to combine both. Our ships are perfect for cruising in comfort!

Before and after the cruise

We often find that a week onboard is not enough. We want to continue. Spending a few days in Athens or lazing on the beautiful beaches near Athens, or on the other Greek Islands. We are ready to book any hotel for you, all you have to do is tell us where and how long you would like to stay!