The coffee industry in Costa Rica

About Costa Rica first of all remember this: here is the highest standard of living among the coffee producing countries, high percentage of speciality coffees, many people think that the method of jani processing was invented here, but it was not, and the cultivation of Robusta is prohibited – which also does not correspond to reality. But what does correspond – we tell you below.

Costa Rica was the first country in Central America to start growing coffee. This happened thanks to the Europeans, who in 1779 brought Arabica to the country. At the beginning of 19th century, when the coffee industry was just gaining momentum, the government saw the potential in this area and began to develop it.

In 1831 the government decreed that anyone who grew coffee on an unoccupied plot of land for more than five years automatically became its owner.

In 1843 Costa Rica began exporting coffee directly to Europe and then to the United States. 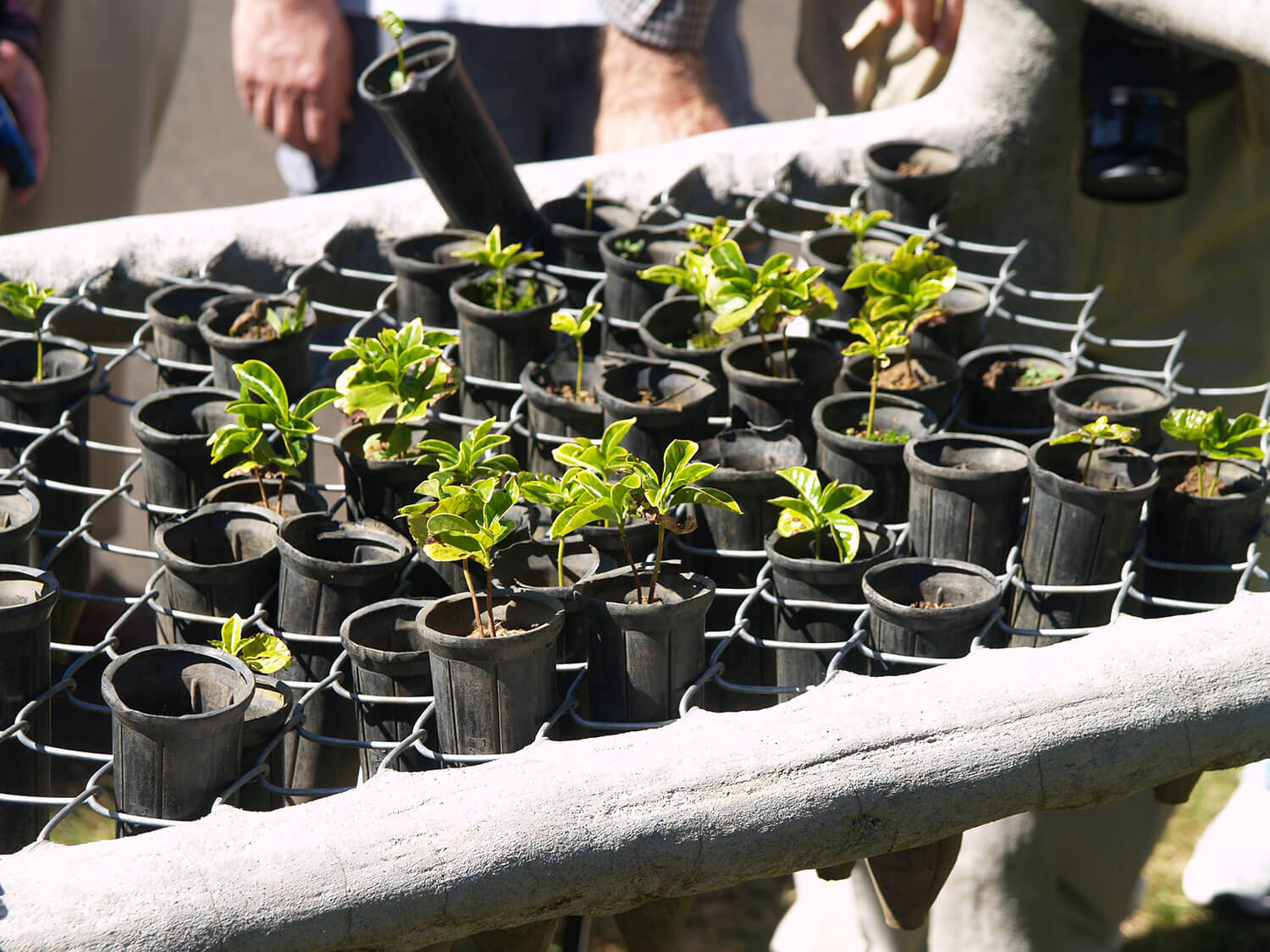 Costa Rica used the profits from coffee exports to build the first railroads, ports, the Costa Rican national theater in San Jose, which is still considered one of the best in Central America, and many Costa Ricans were able to get an education in Europe.

Costa Rica’s first coffee was planted near San Jose, the country’s capital. Like the rest of the country’s coffee-producing regions, it has high altitudes, volcanic soil, and lots of sun and rain. In short, Costa Rica’s terroir is almost perfect in terms of growing delicious coffee.

READ
Discovery of Antarctica in 1820

Cold nights in the mountains delay the ripening of the berries, giving them time to form a more complex flavor. It’s not too hot during the day, thanks to the high altitudes, the rains nourish the trees, and good drainage of the volcanic soil drains away excess moisture. 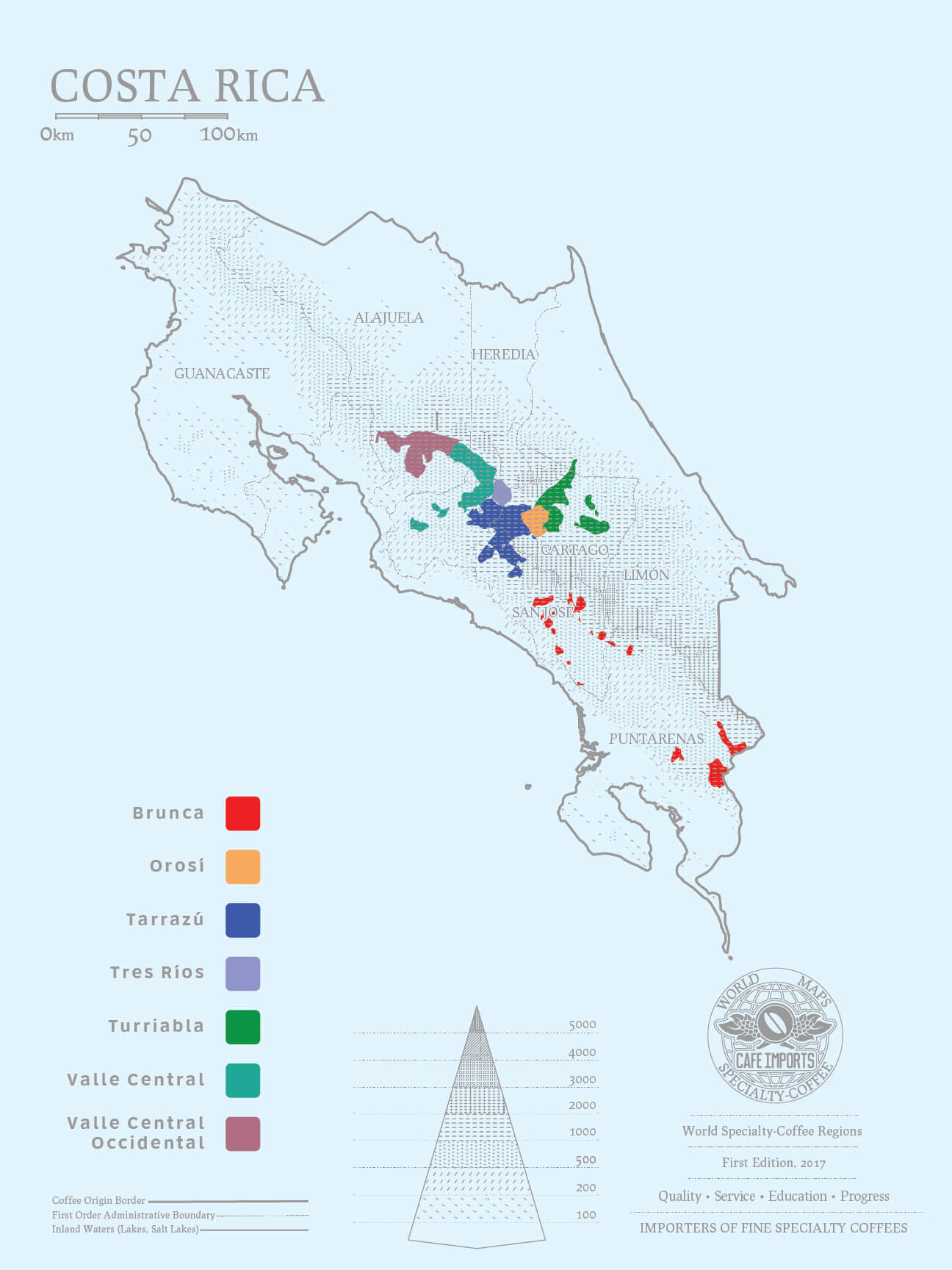 Tarrazu: plantations are 1,200 to 1,700 meters high and harvested in December and March. This is the most productive and famous region of the country – 35% of all Costa Rican coffee is grown here.

West Valley: the altitude of the plantations – 1200-1650 meters, the harvest in November-March.

There are now about 50,000 farmers in Costa Rica. Small farmers who do not have processing stations sell the berries either to the cooperative of which they are members or to the so-called Palmichal, that is, processing stations. Medium and large farmers process coffee in their own small stations. 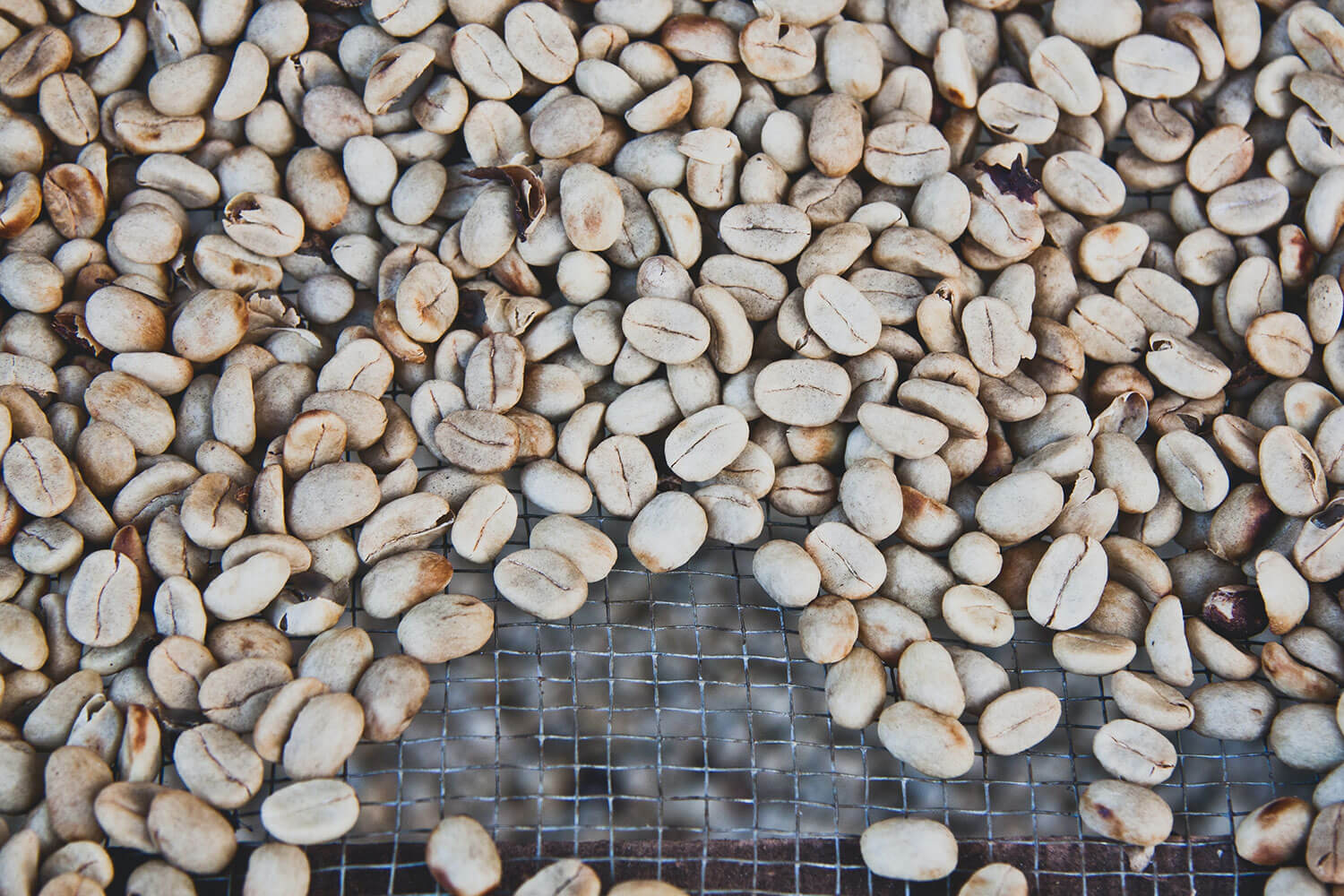 Costa Rica used to use the washed method of cultivation. As a result, the soil was contaminated with acidic water, which was discharged after fermentation. The high level of development in the country led to widespread publicity for this problem, and farmers changed the processing method from washed to a mechanical pulp removal method, semi-washed. During this method, instead of removing pulp by fermentation, it is removed mechanically on special equipment, the demusilator.

However, farmers still continue to call this processing method Fully Washed, and this is completely misleading. A similar confusion occurs in Colombia. The mechanical pulp removal method is becoming more and more popular there, but it continues to be labeled as washed when exported.

At the same time as the classic processing has changed, so has the processing of micro lots. They are predominantly treated with the Hani method, as the flavor potential of this method is often higher than that of the mechanical pulp removal.

The natural method is also used in microlots, but is still rare because of the risk of spoiling due to the high humidity and the long drying time.

Many people associate Costa Rica in the specialty industry with the Hani method. Some sources even claim that this method was invented here. In fact, the Hani method was invented in Brazil back in the 1960s, but there it was called Pulp Natural. In Costa Rica, however, it became known as Honey, and it quickly gained popularity on the specialty coffee market.

If you want to know more, read the article about coffee processing.

Costa Rican coffee is classified according to its height. Height affects the density of the beans, and density affects the quality of flavor. The denser the bean, the better. Thus, Costa Rica assigns one of three classifications to coffee:

The most often grown arabica varieties are Caturra, Catuai, Villa Sarcha and Bourbon.

As for Robusta, its cultivation has been forbidden by the state in Costa Rica since 1988. This was done to ensure that the Robusta did not accidentally ruin the flavor characteristics of Costa Rican Arabica due to accidental crossbreeding. However, tests in 2016 showed that this was not really necessary if the robusta was grown separately, in regions with low altitudes.

READ
Cuba, the jewel of the Antilles

On May 16, 2018, a decree was published in La Gaceta newspaper that allows the cultivation of Robusta in low altitude regions. Compliance with this decree and its restrictions is monitored by the Costa Rican Coffee Institute (ICAFE).

The country is likely making these decisions because the climate is changing and arabica is very sensitive to it. Already, Costa Rican farmers are facing a rise in fungal diseases and erratic flowering cycles. If the Arabica crop goes bad, the country will immediately be in crisis. Robusta will help mitigate the effects in the future.

Farmers and their results

Costa Rica’s climate and soil are ideal for growing really good quality coffee. There is a reason why so many specialty coffees are grown in this country. 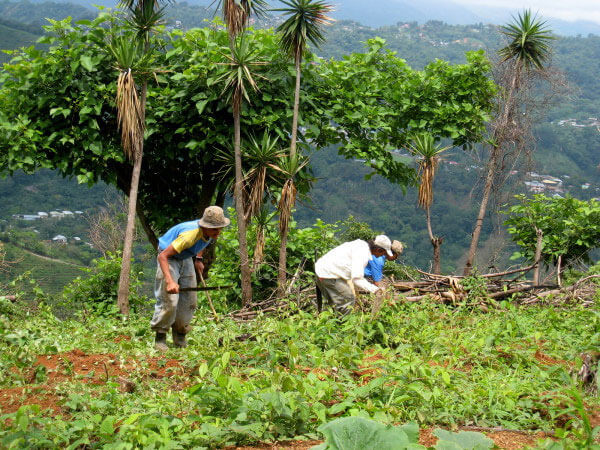 Planting coffee in a plantation in the mountains. © costa-rica-guide.com

We wrote above that farmers face the effects of climate change. But climate is not their only problem. Another problem is the cost of production.

Given that labor and agricultural inputs are much cheaper in Brazil, Asia, and even other Central American countries, it is extremely difficult to compete on price.

Because of the high income level of the population, it is very expensive to hire pickers inside the country (and there are few people willing to do so), so pickers from Nicaragua and other countries usually harvest their crops – they can be paid less.

These migrants move between Central American countries throughout the year to harvest crops, since each country has different harvest times. But even this helps only marginally. 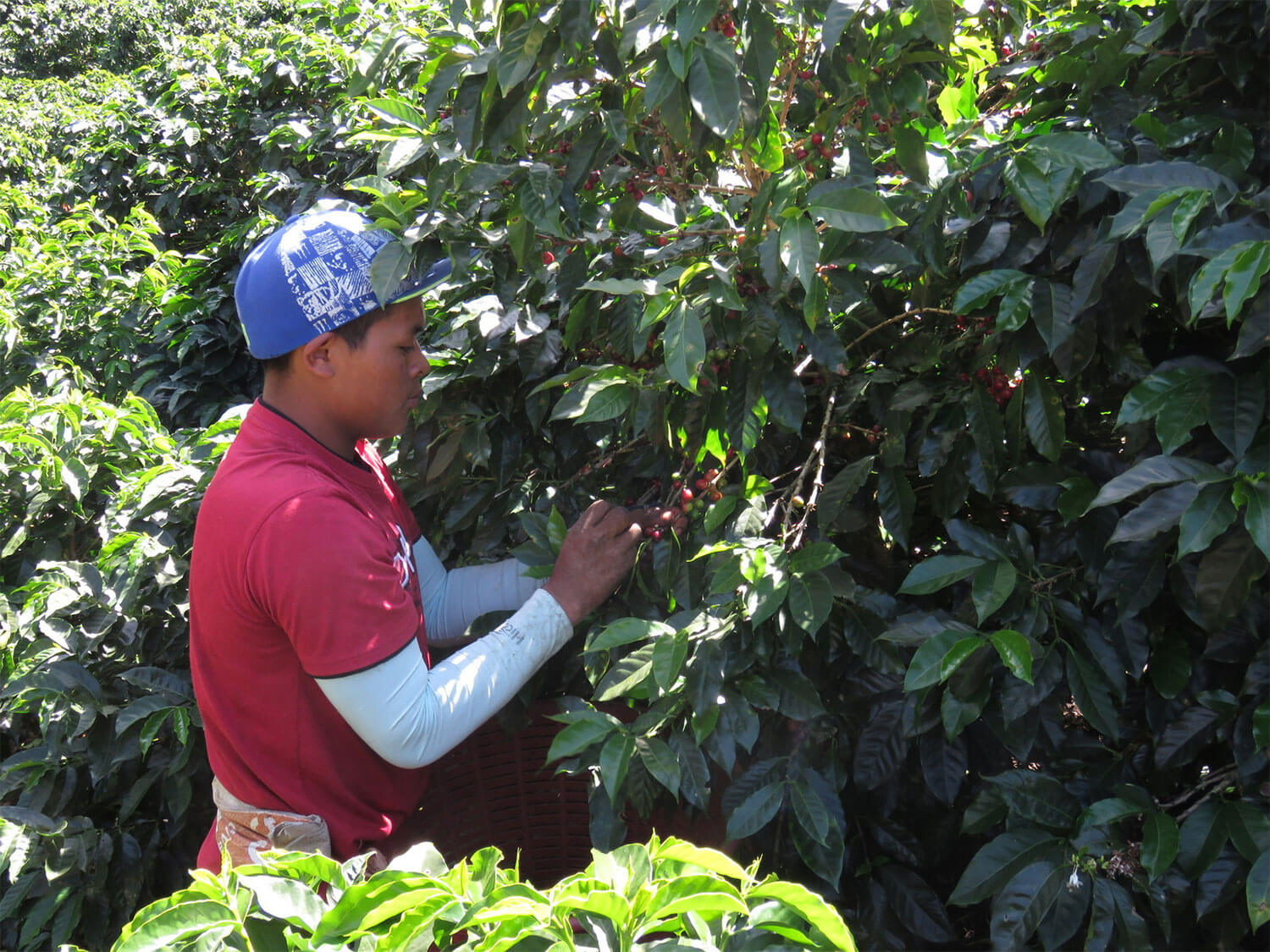 Most coffee pickers are immigrants. © costa-rica-guide.com

To be able to compete and sell their coffee more expensively, some farmers produce certified coffee. For example, Fairtrade, Organic and Bird friendly. However, the number of such farmers is still small.

The area of Costa Rica coffee plantations is 84 thousand hectares. For most farmers it is not only a plantation, but also a place of residence.

According to the latest 2018 data, Costa Rica ranks 16th in the world in terms of coffee production, its result of 1.35 million bags of coffee of 60 kilograms. Of these, 1.11 million bags went to export. That is about 90% of all coffee. About half of all exports come from the United States.

We thank Daria Zakharova for her help in preparing this article.

History of geyser coffee maker: how the famous la moka that became the symbol of Italy appeared