The 8 main places to stay in Extremadura 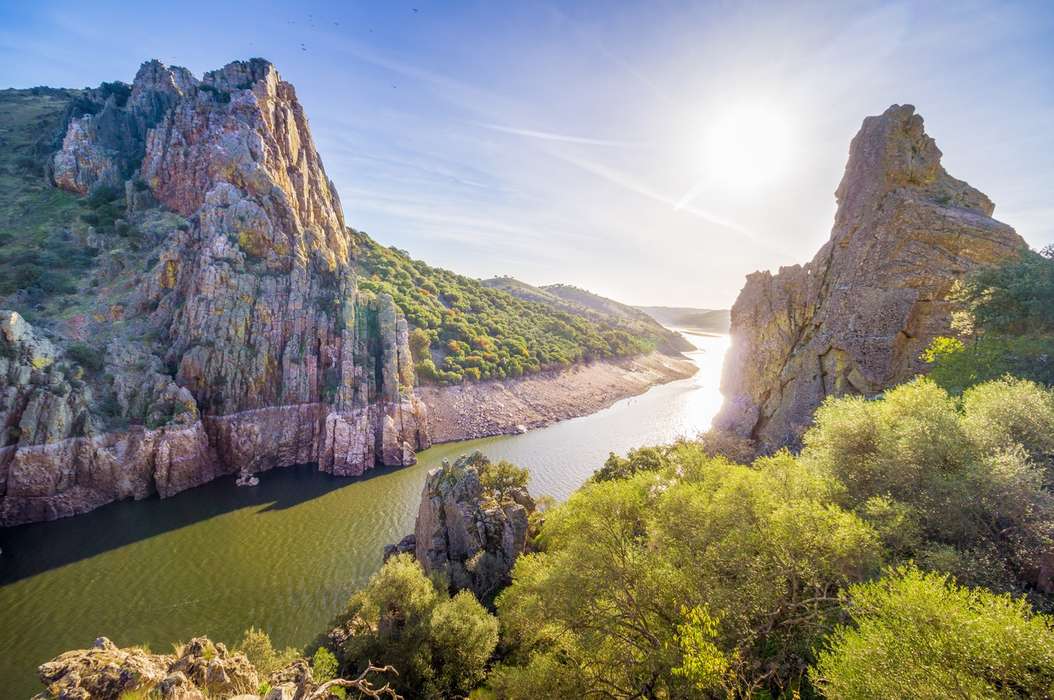 Extremadura is a region marked by a legacy from the Romans, barbarians, Muslims and Christians, not forgetting its first inhabitants, the Lusitans. Perhaps for many, Extremadura is the great unknown, but after this article, we are sure you will want to devote yourself fully to its history, nature and people. Remember each place you must visit in Extremadura and start your adventure. 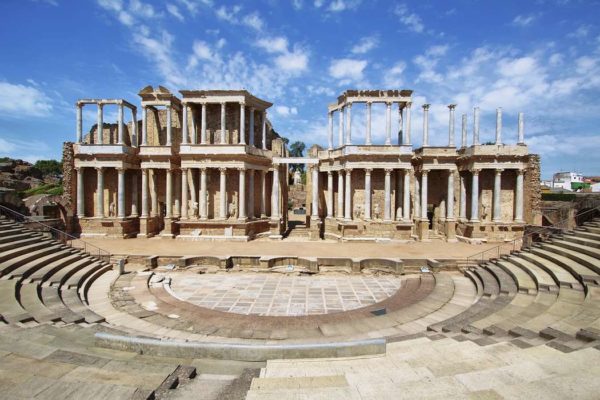 One of the most emblematic places in Extremadura is Mérida, in addition to being the capital city. What was once one of the controlling metropolises of the Roman Empire now has a large bouquet of monuments from that magnificent era. The amphitheater was built in 8 B.C.

It still retains much of its structure, and is perhaps the most prominent arena for wild shows such as gladiatorial games or wild animal hunts. Nearby, near the road, is another of the most iconic monuments, the theater, which is a UNESCO World Heritage Site, and other monuments such as the Aqueduct of Miracles or the Roman Bridge. It is also worth visiting the National Museum of Roman Art, which houses a large sample of antiques found in the city grounds and a spectacular mosaic. Without a doubt, Mérida is an important point on the itinerary in Extremadura. 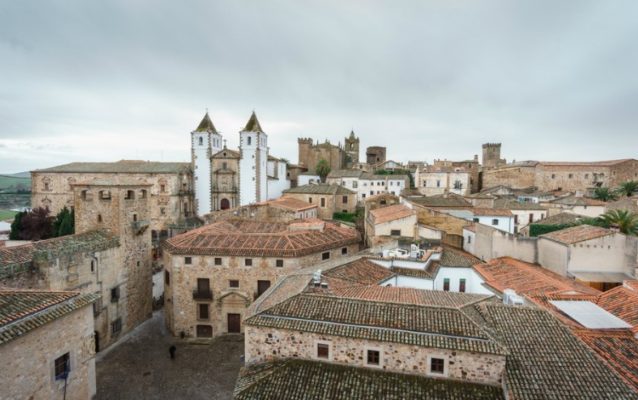 From Mérida we head to Cáceres, where the first thing that gets us excited is the old town. The fortress city of Cáceres stands out as an important representative of the Spanish Renaissance: a striking example of both religious and civil buildings found in the old town. It is also surprising to see that the buildings of the fourteenth, fifteenth and sixteenth centuries, undamaged, and because of their undeniable charm, were declared a World Heritage Site in 1986. In the old town of Cáceres, the Cathedral of Santa Maria, built in the fifteenth and sixteenth centuries and the main Christian church in the city, stands out. It is joined by other monuments such as the Palacio de las Veletas, where the Cáceres Museum and the Golfin Palaces are located. 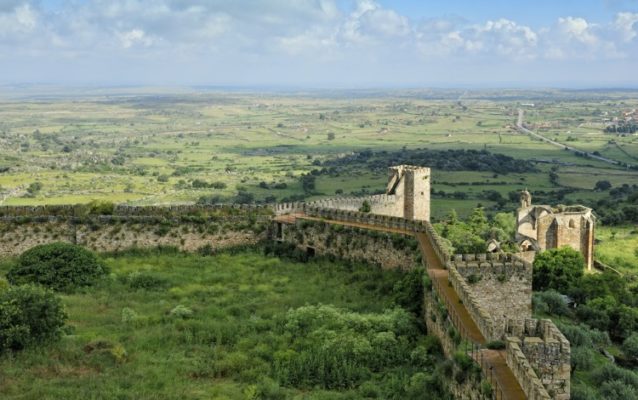 We continue our journey through Extremadura until we reach Trujillo, a city that has become an important tourist destination, where the Muslim occupation is visible even today, and where Game of Thrones was filmed. The important monumental complex that stands out the most is the Plaza Mayor, in the Renaissance style. Here is the equestrian statue of Francisco Pizarro. In addition to being a meeting place, there is a tourist office that leads to various museums and has beautiful architecture that will by no means be overlooked. In Trujillo, the Church of Santa Maria is also worth a visit, without a doubt. 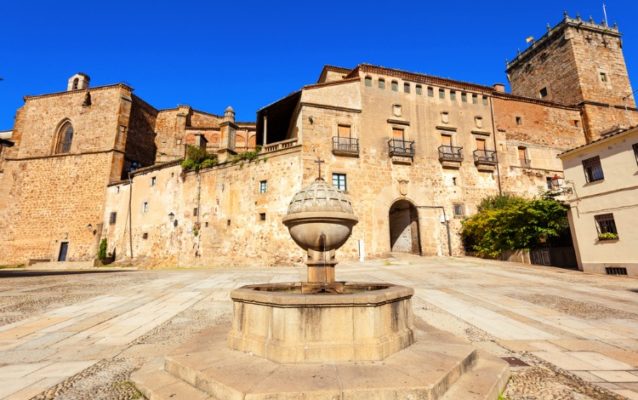 Another essential point of the geography of Extremadura is Placencia and especially its cathedral. It retains a structure that distinguishes it from almost all religious structures and makes, along with Salamanca and Zamora, a peculiar one. All three are the only ones in the world that build domes using the dome technique. It consists in supporting the tower of the building with scallops, which gives the highest part of the building a cylindrical appearance and with a scale that we would not be able to see elsewhere. Indeed, all lovers of art and architecture cannot miss this place. 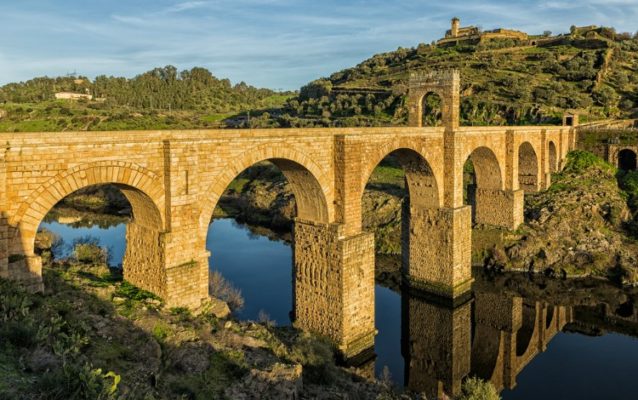 Following the route of the history of Extremadura, you cannot miss the Alcantara Bridge. The structure, built at the beginning of the second century, crosses the Tagus River and has a feature of six arches of different heights, as well as five pillars supporting it. The bridge is located on the border between Spain and Portugal. 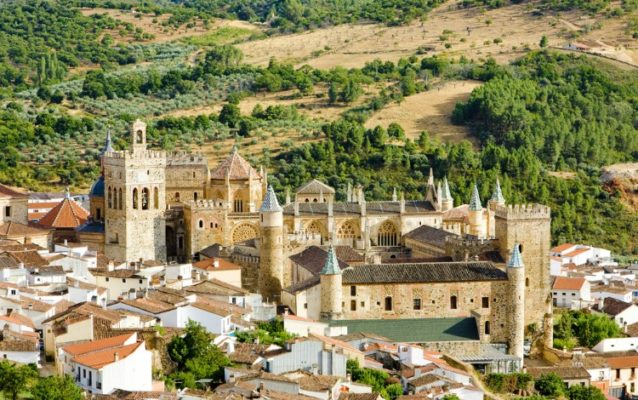 Guadalupe is one of the towns that follows the route of Isabel la Católica through Extremadura. Without a doubt, its main attraction is the Royal Monastery of Guadalupe. This structure highlights styles that range from the 13th to the 18th century, including Gothic, Renaissance, Baroque and Neoclassical. The building has a beautiful façade against which you can take good pictures.

READ
What to do in the capital of Finland on vacation 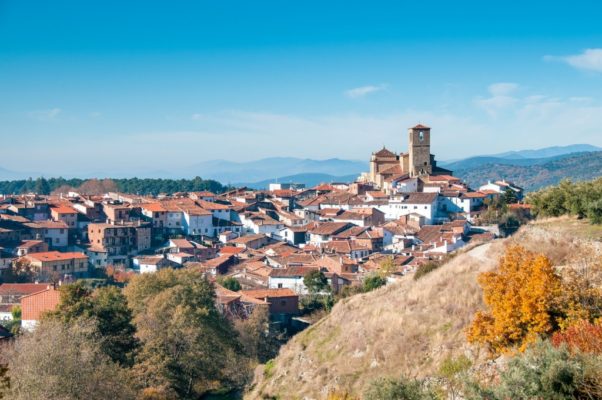 Finally, we highlight the town of Ervas, located in the famous Ambrose Valley and where various activities of cultural interest are found. In addition to a huge natural area with many mountain trails, there is a huge summer fair as well as various theatrical and cinematic events. This Jewish town is of particular interest for its Jewish quarter, which was declared a historical artistic monument in 1969. It was an area chosen for settlement by the Jews who came to this city in the fifteenth century, which had a significant influence on the appearance of the streets and buildings.

Despite its architectural attractions, Extremadura also boasts natural reserves, such as Las Urdes. In this case, we are talking about a region of forest character, where the director Luis Buñuel made a documentary that is already part of the history of Spanish cinema: “Las Urdes, The Land Without Bread”. 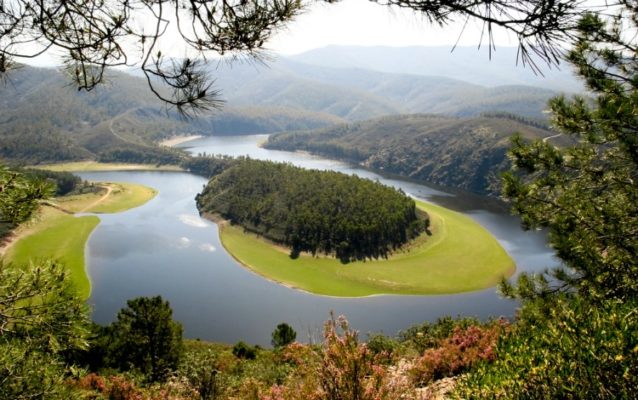 Other most impressive places in the area are the Garganta de los Infiernos and the natural basins of northern Cáceres. In the former, we see impressive waterfalls with beautiful and gigantic pools in the well known Gerte Valley.

The natural pools are the pools and dams that form in the canals of the Estremadura rivers and become lively bathing areas on hot summer days. Also in the province of Cáceres, right in the Ambrose Valley, is the thermal town of Baños de Montemayor, one of five in Spain declared an excellent thermal villa, and the only one in Extremadura. And its spa and Roman baths are noted for their mineral-therapeutic properties. 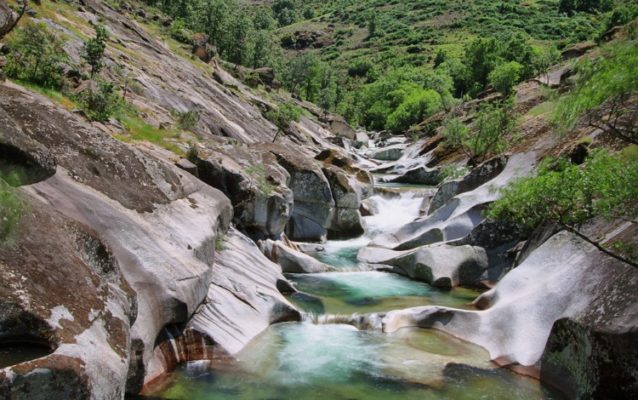 Thus, Extremadura is a region that hides many secrets and will surprise you from the first visit. 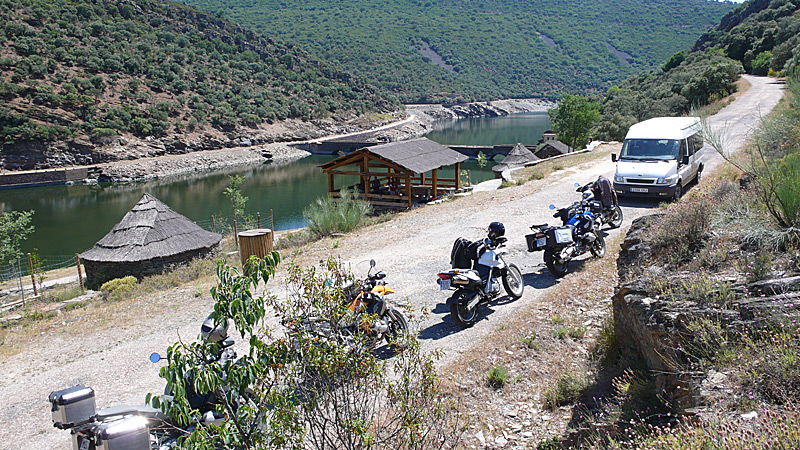 Extremadura is a region remote from the tourist centers and truly Spanish in the heart of the country. Extremadura has an unspoiled, extravagant beauty that preserves Spain’s authentic traditions, cultural and natural treasures. Cities, castles, palaces built by the Romans or Arabs prove the richness of the history of the area.

READ
What to see in Versilia, Italy

The motorcycle tour starts from Andalusia and immediately after visiting its capital, Seville, follows one of the few wilderness areas of Europe, Extremadura. The region offers the pleasure of scenery of authentic, unspoiled nature combined with the rich cultural heritage of the cities of Spain. The journey takes you through mountainous and flat terrain and paved roads. After the day trips you will have a rest in the comfortable 3, 4 star hotels. 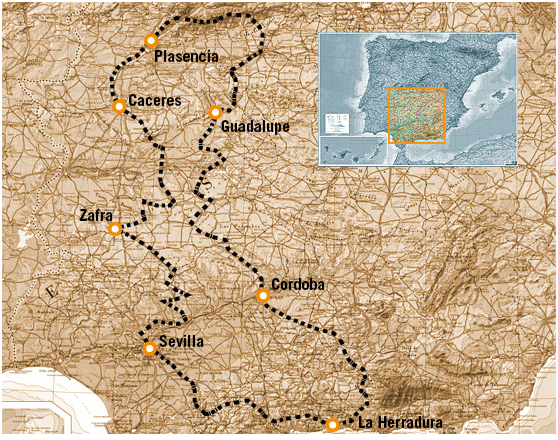 Transfer from Malaga airport to Erradura on the coast, hotel accommodation. Meeting the group for dinner, getting the bikes and discussing the upcoming trip.

Departure from Erradura in the direction of Seville, the capital of Andalusia. On the way you will find El Torcal Natural Park with its striking landscapes of limestone rock terrain. Crossing the valley of the Guadalquivir River we arrive at the final destination of the route, Seville, the capital and heart of Andalusia, one of the most colorful and vivid cities of Spain, where the atmosphere of flamenco, bullfighting, and festivity reigns.

From Seville we will proceed to the natural park, the Sierra Morena Mountains. Our way will be on scenic mountain roads, oak forests, bull pastures surrounded by lakes and fields with millions of flowers. On this day we arrive in Extremadura, a land rich in history and home to the conquerors of the Americas. The wealth brought from across the ocean in Extremadura has been used to build lavish palaces and churches.

On the fourth day of the trip we will visit two important cities in the history of Spain: Trujillo and Cáceres. Trujillo is the birthplace of the famous Spanish conquistador Pizarro and is known for its magnificent central square, a medieval fortress, and the city walls with seven gates. Cáceres, on the other hand, welcomes with its beautifully preserved 14th century palaces, which give the place a unique, magical atmosphere. The historic monuments of the city are included in the list of world heritage of UNESCO.

On the way from Cáceres we will visit the Monfrague Natural Park, protected by the state since 1979. Here there are some of the most extensive forests in the Mediterranean, and in the cliffs of the area there are nesting vultures, eagles and falcons. The final destination of the day’s itinerary is Guadalupe, the town where one of the images of the Black Virgin Mary, the patroness of all Spanish-speaking countries, is located.

On the way from Guadalupe we will cross an area with many ancient man-made lakes before leaving captivating Extremadura. The next, no less interesting point is Cordoba on the slope of one of the mountains of the Sierra Morena. In the 11th century the city was one of the major centers of Spain, today it is a modern city with a rich history.

Return to our final destination Erradura and pass through Granada and the Sierra Nevada Mountains, which offer magnificent panoramic views of the Mediterranean coastline on the serpentine roads.

Tour on your own motorcycle 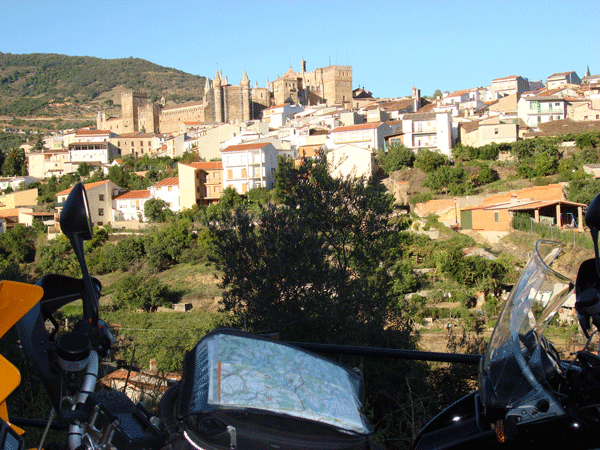 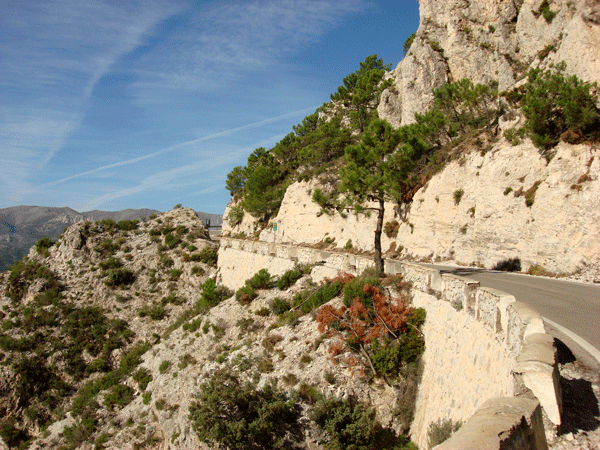 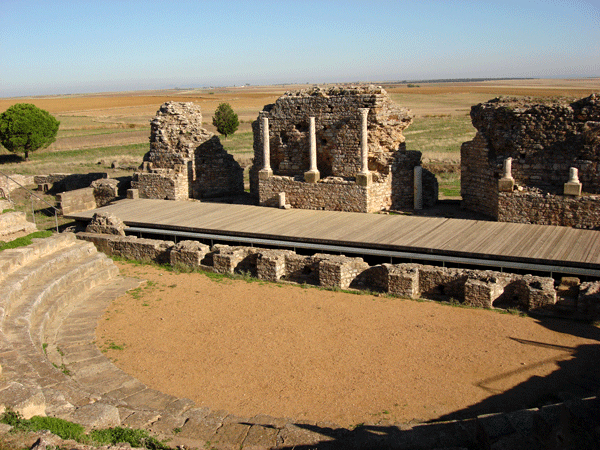 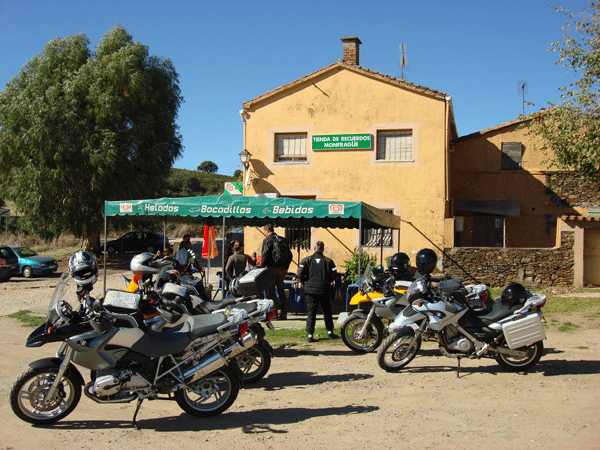 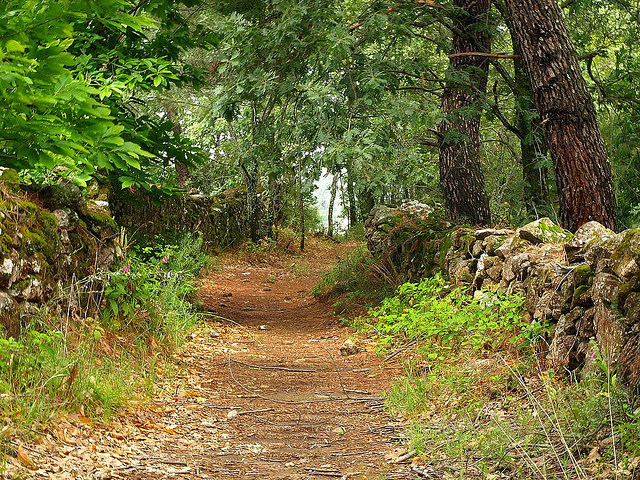 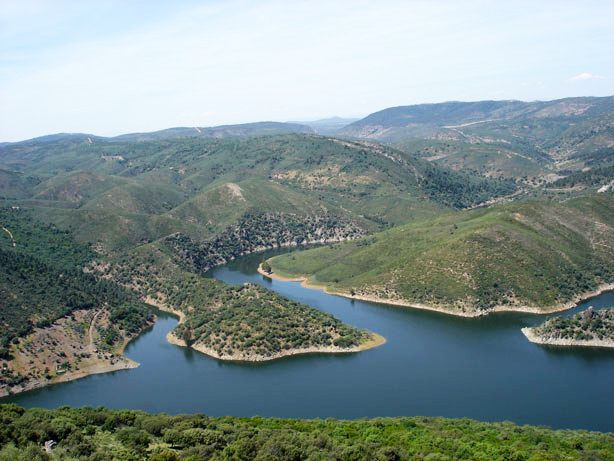 Service Center for Life and Business “Spain in Russian” is your guide in the world of individual tourism. Organization of tours, itineraries, trips, tickets for various events, excursions with the best guides, organization of holidays. Services for discerning clients.