What are the dangers of China

Napoleon was probably the first person in Europe to talk about the “yellow peril. He is credited with saying, “The day China wakes up, the world will tremble” and “Don’t wake a sleeping giant. But the term “yellow peril” appeared only on the threshold of the nineteenth century in the pages of the German and French press. In Russia, it came into use after defeat in the war with Japan in 1904-1905, and referred mainly to the Japanese. It took a century before the danger, real or imagined, focused on China.

How does China become a danger? That depends on how one looks at it. What is striking is China’s economic growth and the concomitant multiplication of scientific research and technological advances. This confirms the opinion of one Russian traveler voiced back in the 18th century that the Chinese are “smart in every respect. Their ability to do so should only inspire healthy envy.

Many people are impressed by military parades in Peking: men and women alike march “hair in hair and voice in voice”. And in the sky and on the sea, the Chinese stubbornly seek equality (still only equality) with the United States and Russia. But what really matters is not the military force itself, but how it can be used. This aspect of the future remains uncertain, but if China is as faithful to tradition in this matter as it is in many others, it will follow the rule: defend against “barbarians,” i.e., non-Chinese, but not attack them first.

The real “yellow danger” lies elsewhere, in the fact that the way of thinking and feeling of the Chinese, the “yellow positivists,” as Dmitri Merezhkovsky called them in his time, may spread and is already spreading to other countries.

The late Samuel Huntington was right: political confrontations in the world, at least in part due to more or less random causes, must give way to civilizational confrontations. The beginnings from which civilizations develop create religions; and, importantly, religions will be measured by their essential meanings, not by the strength of their applied functions.

READ
The Azores - the Tea Heart of Europe

In China, Confucianism, the teachings of Kung Fu Tzu (as he is called in Chinese), an older contemporary of Plato and Aristotle, has dominated for centuries. In the twentieth century. The “whirlwinds of hostility” seemed to have scattered all that remained of it. But on the threshold of the current century Confucianism is gripping minds anew: at first it becomes a “shadow ideology,” and as time passes it is increasingly coming out into the sunshine.

At first glance, the doctrine of the “perfect wisdom” has many attractive features: preaching decency in its various manifestations, honesty, courtesy (“China is a country of politeness,” wrote the early 20th century Chinese academic Vasily Alekseev), mutual friendliness, sincerity, respect for parents and all elders, by age or status. But at its core, there is an attachment to the land. Yes, it has the cult of Heaven, but it is a vague sky that does not extend above the clouds, and the clouds in Chinese drawings are often depicted with their edges bent downward (like the roofs of traditional buildings), as if they were pulling toward the earth.

Order is a key concept in Confucianism. It is an attribute of the Golden Sphere (as the poet Gottfried Benn aptly called it), which the “perfectly wise” teacher Kuhn has protected in the world. Outside the Sphere, chaos reigns, which should inspire fear and disgust. There is too much chaos in cosmic life; it is not without reason that Confucius has no interest in cosmogony. And here is the fundamental difference from Christianity: the souls of the dead withdraw into chaos and from there are capable of harming the living. Therefore, the conspicuous concern of the Chinese for the dead is explained by the desire to propitiate them, so that they do not envy the living and do not interfere with their lives.

READ
Germany is a highly developed state of the European Union, with a large number of attractions

One can understand why Confucianism in China coexists with the formally not yet discarded Communist idea. Both concepts aim to create a perfect society that will not let the people dwell on small things, but will guide them “toward greater and greater happiness. Ahead is “in commune stop” for communists, “rest” for Confucianists.

The answer to those who regret that Russia did not follow the Chinese way: the communist idea is incompatible with Orthodoxy, but it is more or less compatible with Confucianism.

Confucianism forms the core of Chinese civilization, its logos. Confucius addressed it not only to the Middle Kingdom, but also to the “four seas”, i.e. the rest of the world, and modern China does the same: the teaching of the “perfect wisdom” is offered as a cure for the disease that has infected Western civilization and, to some extent, is also infecting other civilizations. We see that, through the efforts of Chinese authorities, Confucianist institutions are now springing up in many countries, especially in the United States and Western Europe. In the United States, independent branches of Confucianism have even emerged: Boston and Columbia (with their centers, respectively, at Harvard and Columbia Universities).

And if China were to “sit in the minds” of the world, as it is currently doing, it would naturally arouse (and already does) interest in the spiritual yeast on which it has managed to rise. Material power paves the way for soft power.

49 photos. China. The Celestial Empire in the XXI century.

China, the most populous country (1.3 billion people) and the second-largest economy in the world, is a vast, dynamic nation that continues to grow and develop in the twenty-first century. Recent events in China include the successful launch of a satellite that laid the groundwork for a space station, the completion of a massive skyscraper in a rather small village, the 26th Universiade games for student athletes, National Day celebrations, the Mid-Autumn Festival, and much more. This listing is just a small glimpse of the human activities and unique places in China over the past few weeks. 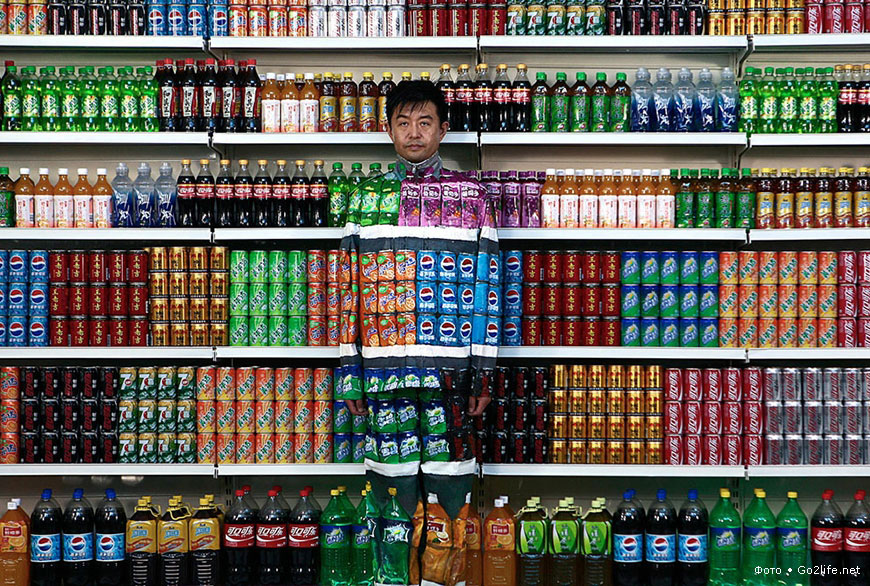 Chinese artist Liu Bolin is waiting for his colleagues to put the finishing touches on his clothes to achieve a visual deception, as if mingling with rows of soft drinks, in his artwork called Plasticizer. 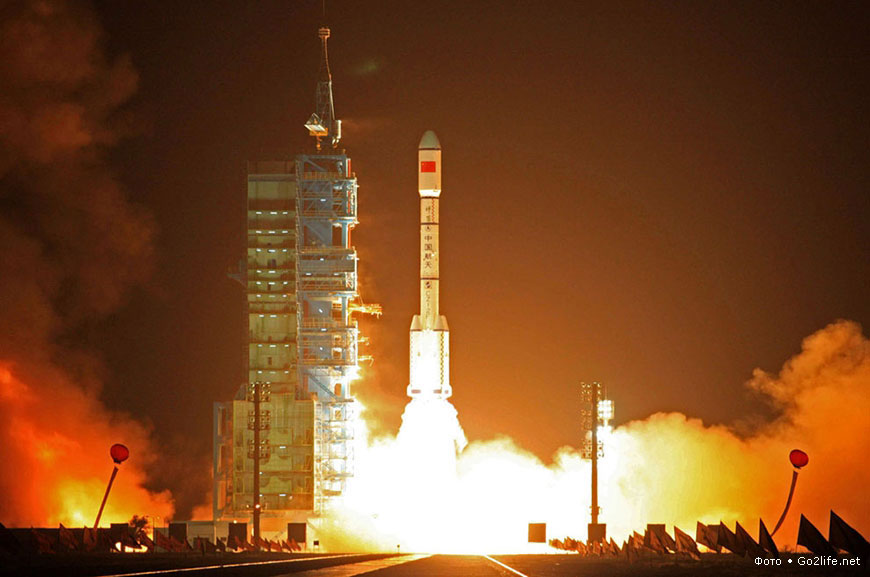 In September 2011, China launched an unmanned, experimental space module to lay the groundwork for a future space station. With this, China wishes to underline its ambition to become a major space power. 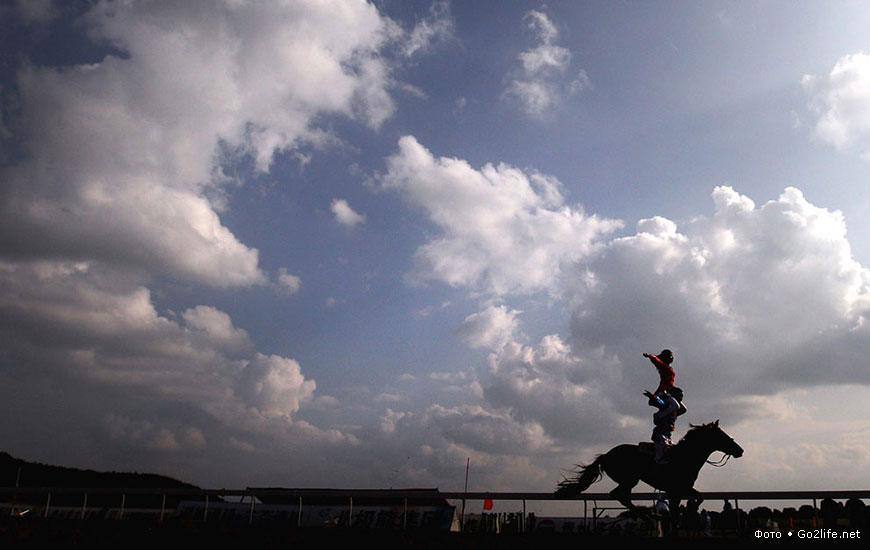 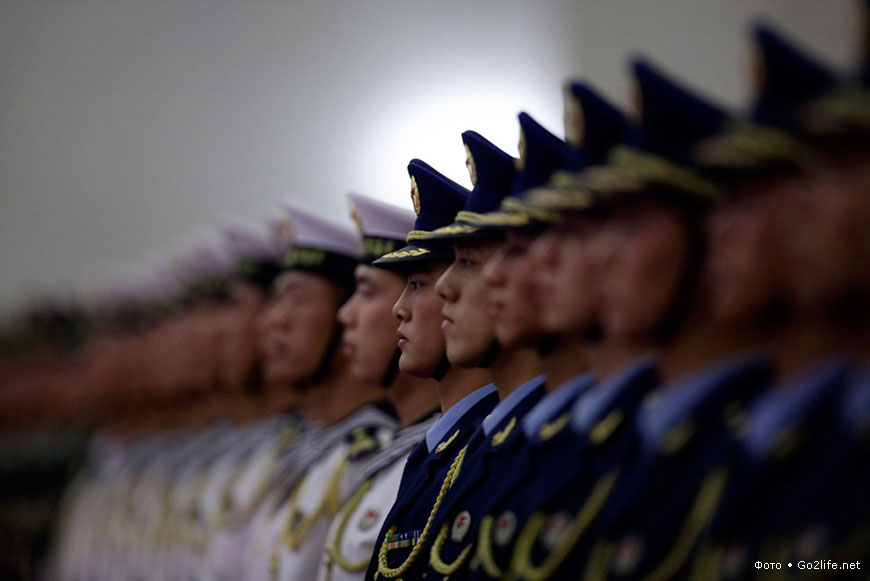 Soldiers of the guard of honor stand in formation ahead of Russian Prime Minister Vladimir Putin’s welcoming ceremony at the House of People’s Congresses in Beijing. 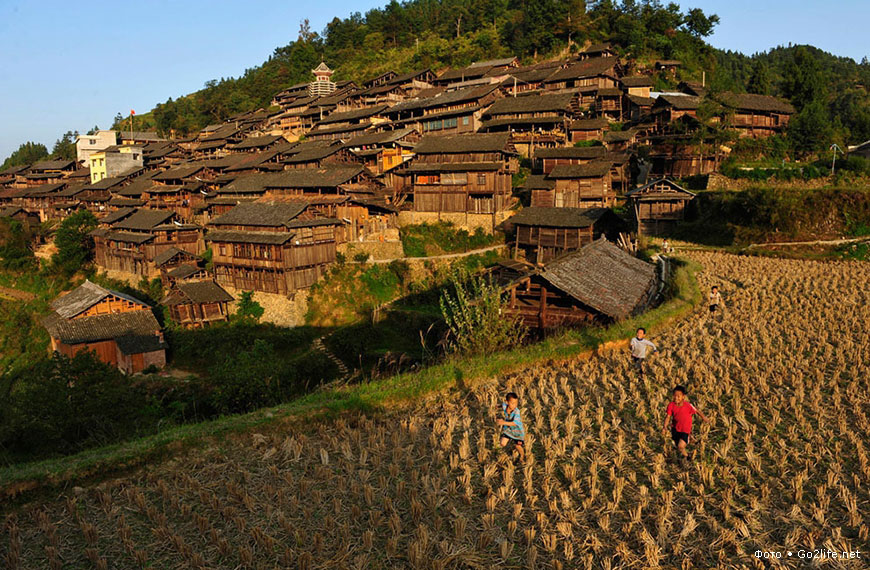 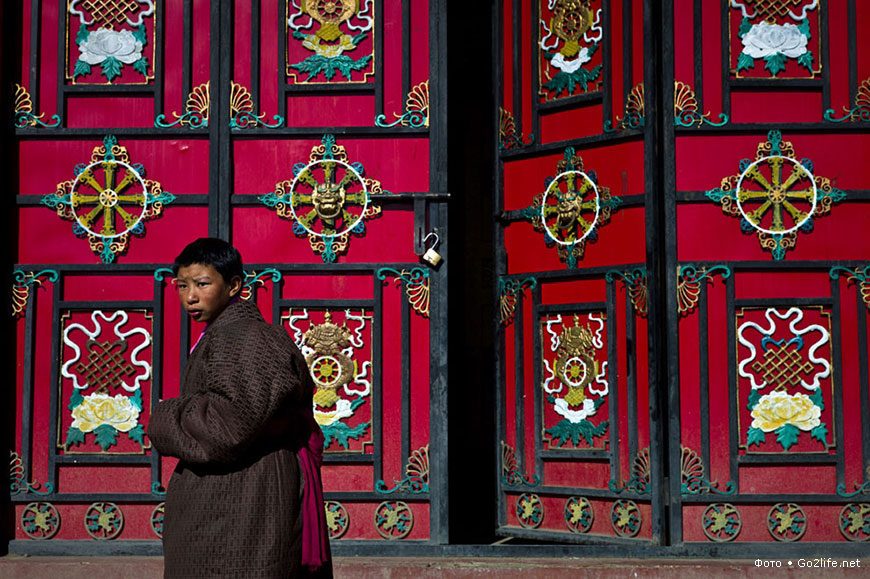 A young monk walks past the door of a monastery in China’s Sichuan province. Tibetan Buddhist monks say the wave of self-immolations in China is linked to Beijing’s refusal to cooperate with the Dalai Lama, and fear the protests will make their lives even more difficult. 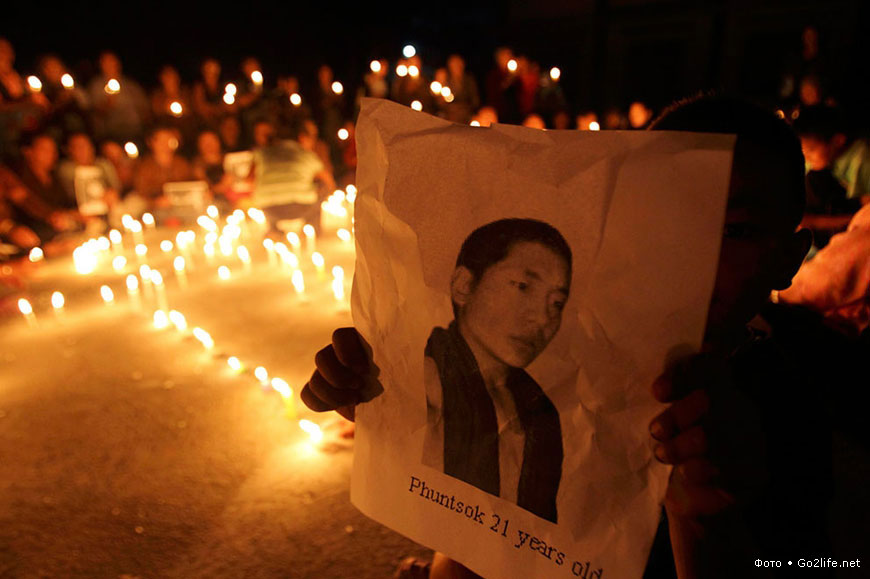 Portrait of a Tibetan monk who committed suicide by self-immolation. 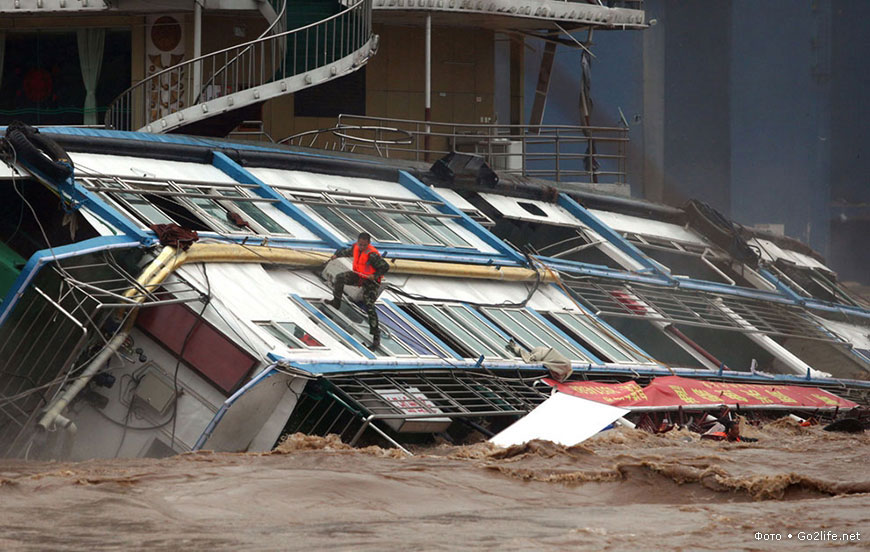 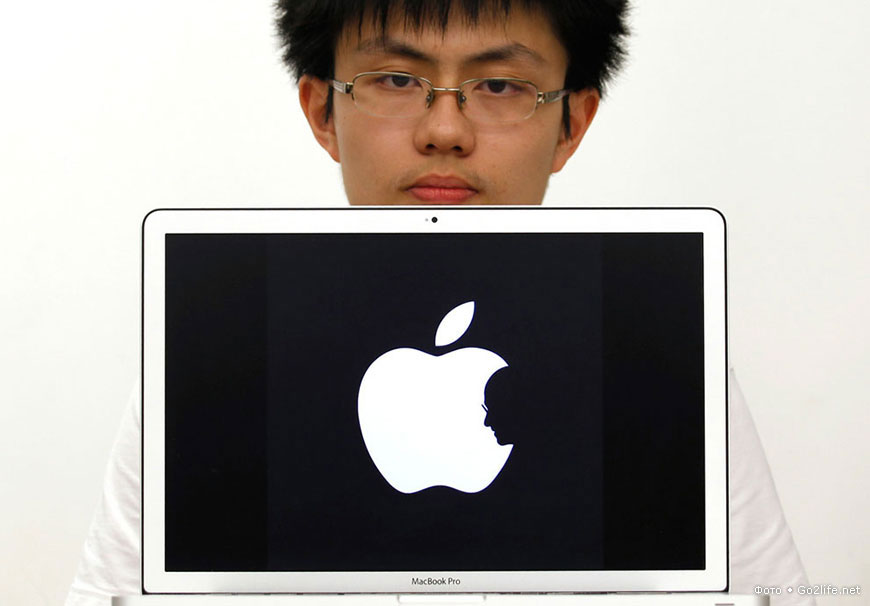 A 19-year-old designer, a student from Hong Kong, designed an Apple symbol in memory of Steve Jobs. 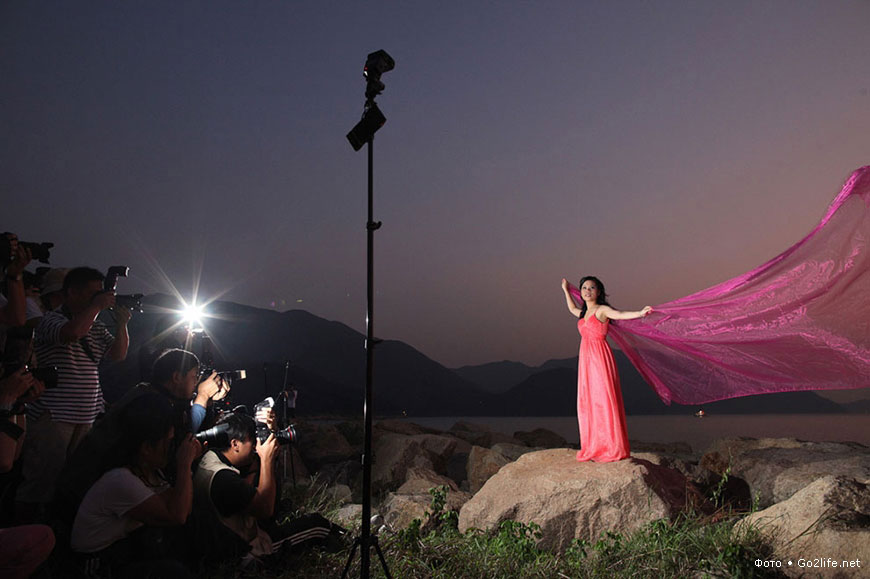 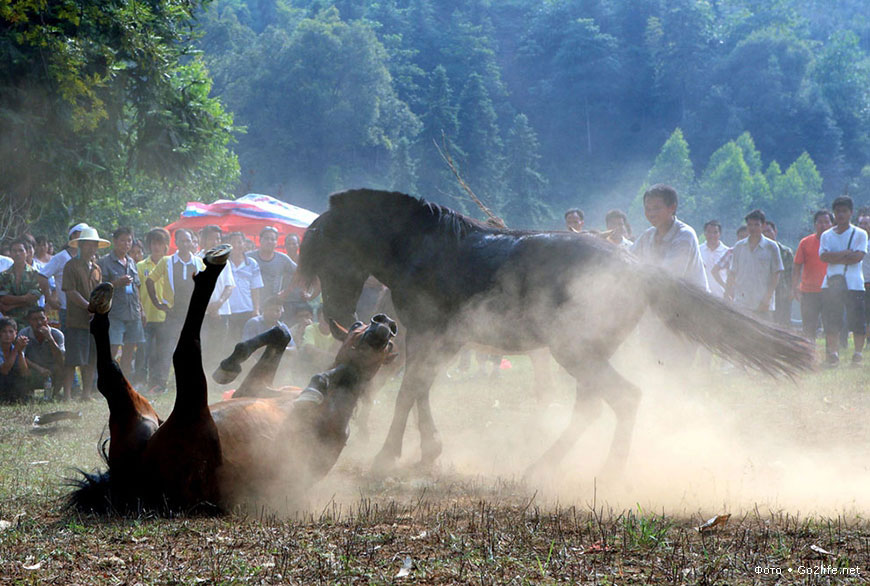 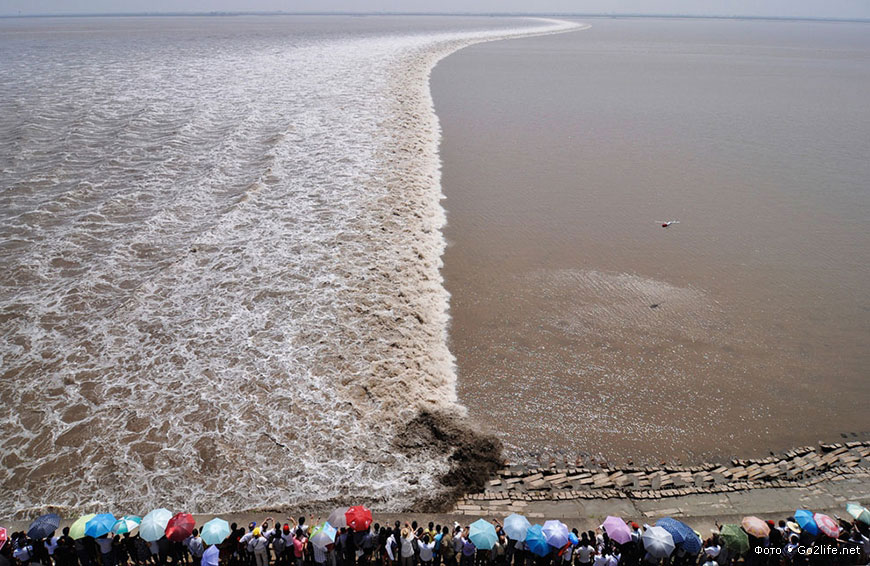 Tourists admiring the tide on the riverbank. 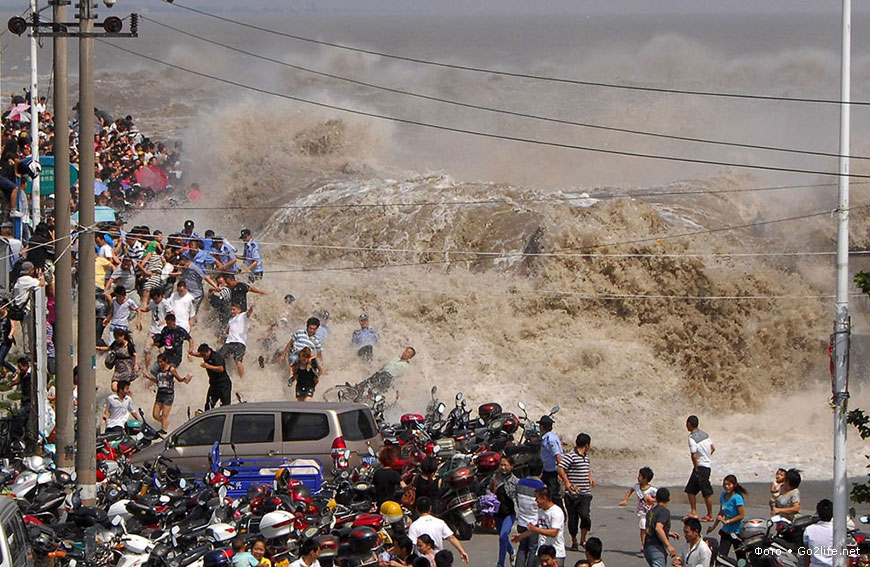 About 20 people were injured after being hit by a wave when they got too close to the river, viewing the annual sea tide heading into the river and creating high waves. 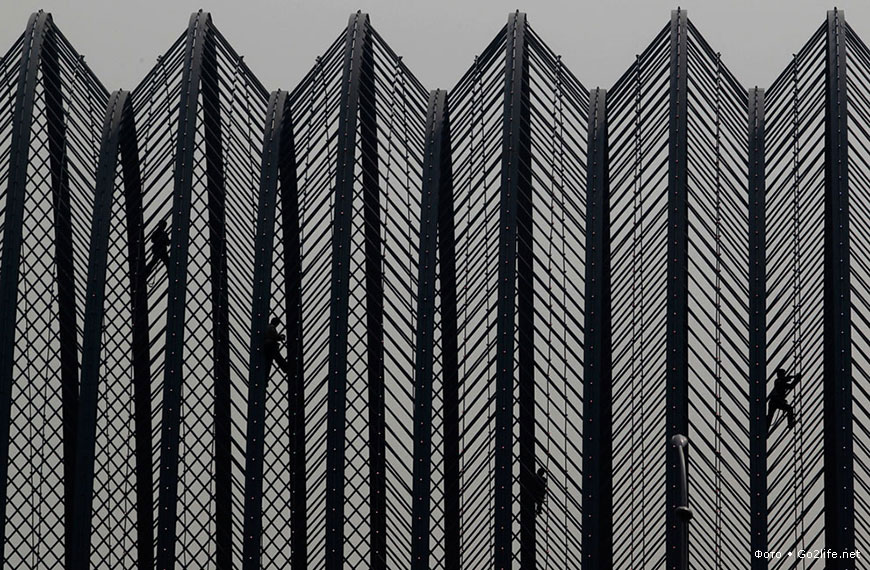 Laborers install lamps in the bridge structure during the construction phase. 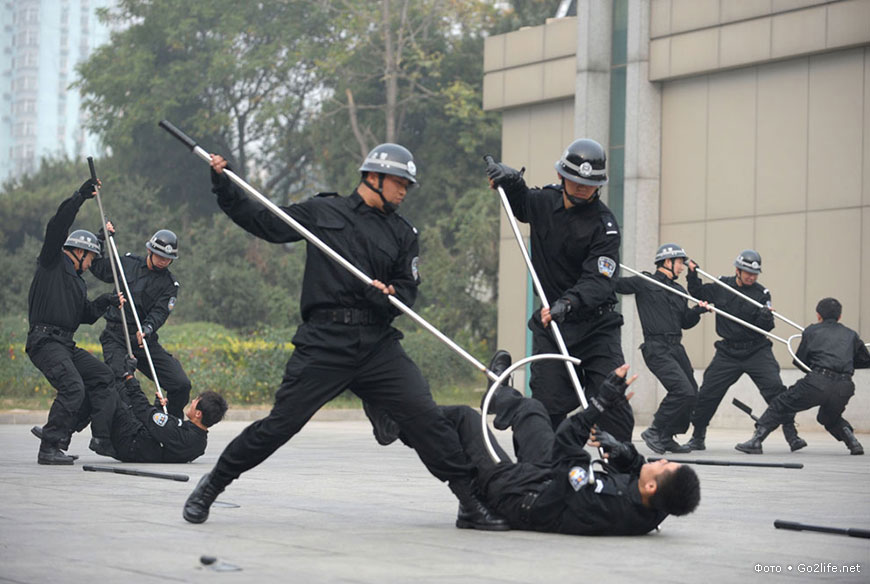 Chinese police show off a new crowd control weapon, a giant fork, during a training session in Beijing, Oct. 12, 2011. Rising protests and unrest have plagued China in recent months as social and ethnic tensions spiral out of control. 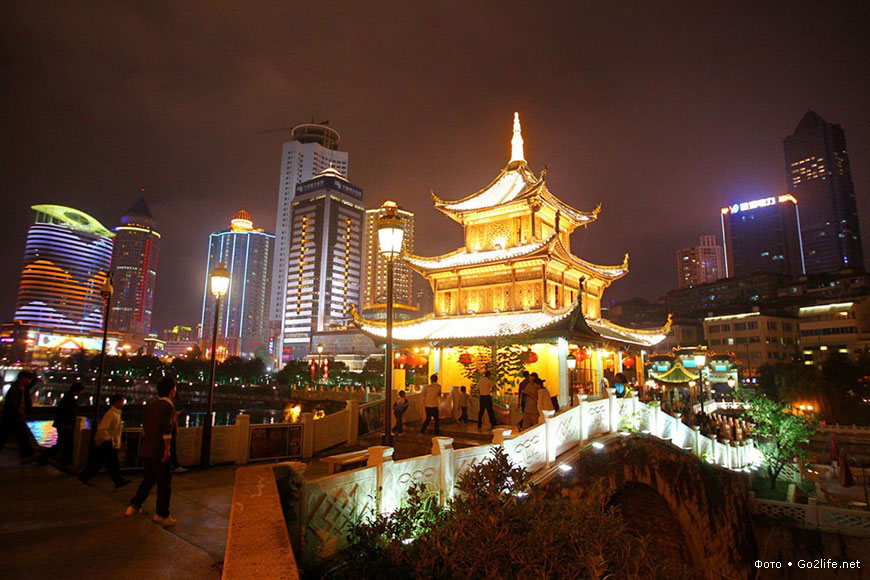 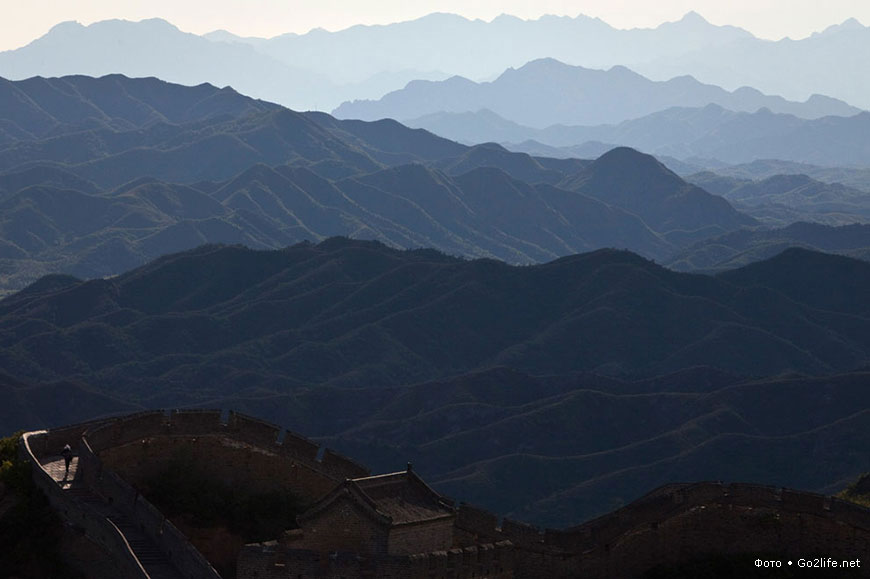 A tourist walks along the Great Wall of China. 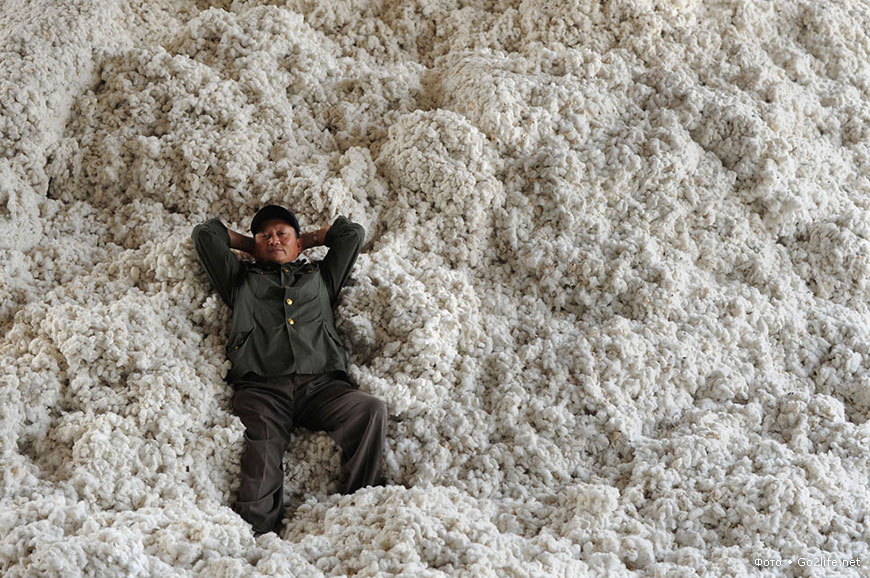 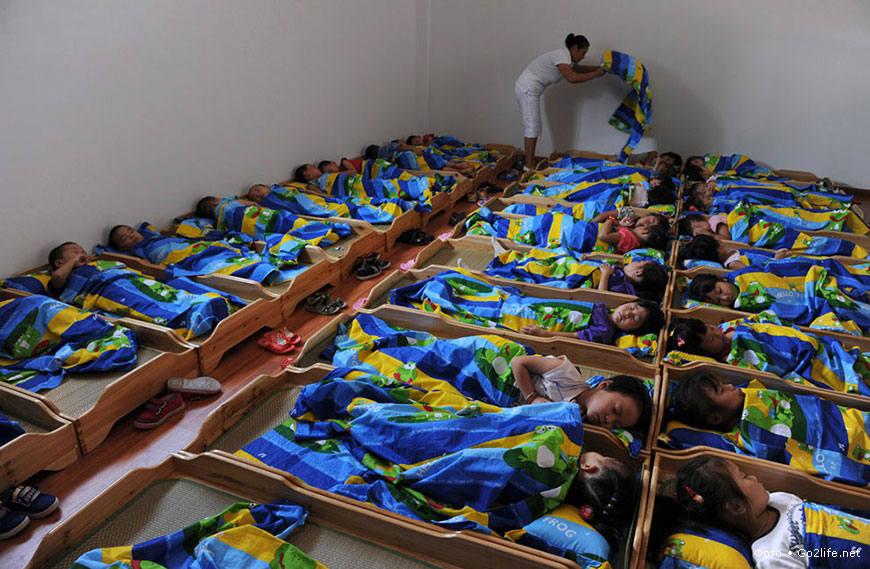 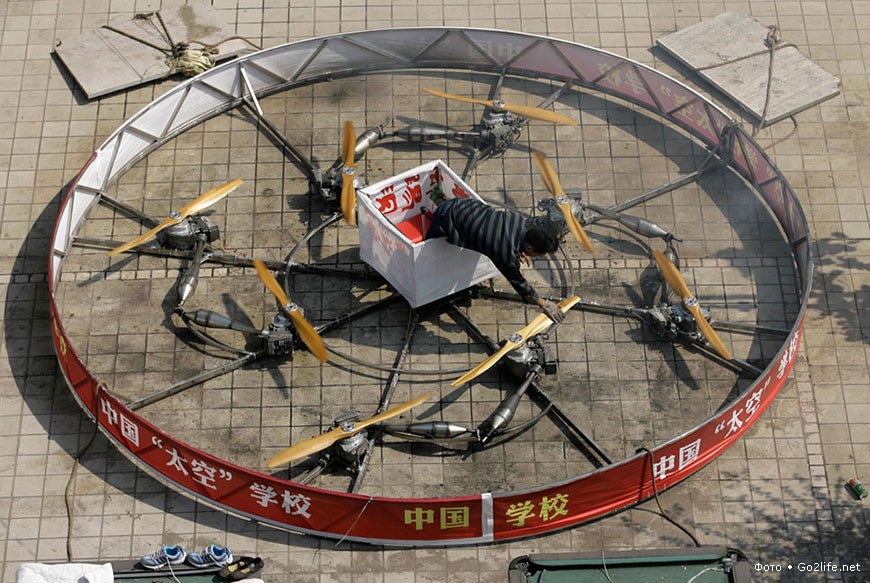 A local farmer has built a flying device. 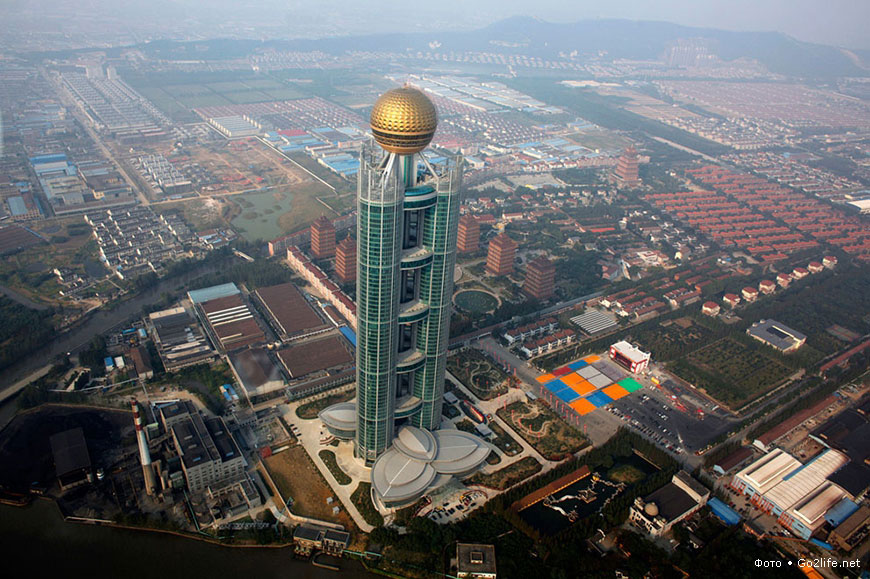 A newly built skyscraper in the village of Huaxi, Jiangsu Province. Huaxi, also known as China’s richest village, celebrated its 50th anniversary with the inauguration of a massive 328-meter skyscraper. A golden bull, weighing a ton, also welcomes visitors to the observation deck on the 60th floor of the tower. In Huaxi, at least 2,000 residents have a house, a car, and $250,000 in the bank and enjoy unified health care and free education. Once a sleepy village, with only 576 residents in the 1950s – now so rich that county businessmen would donate factories for a million dollars to buy the privilege of a village residence permit. 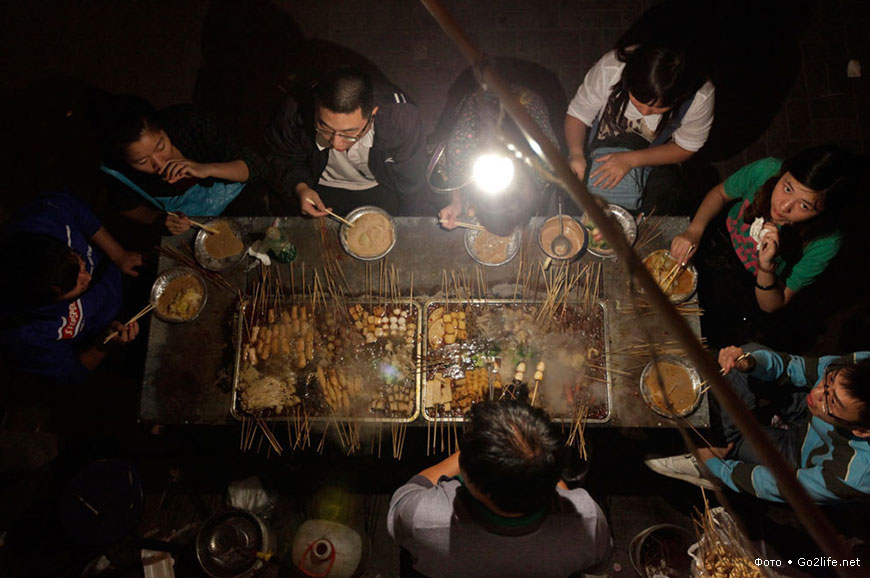 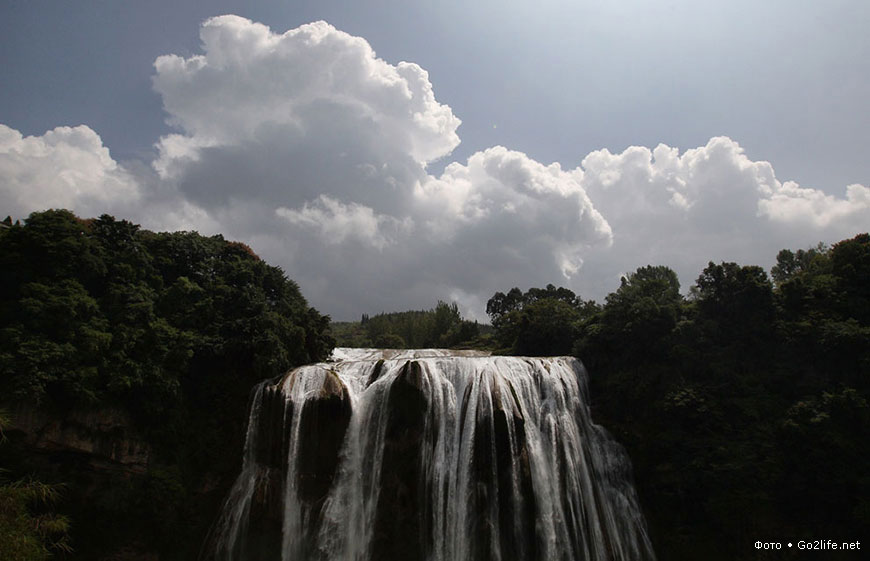 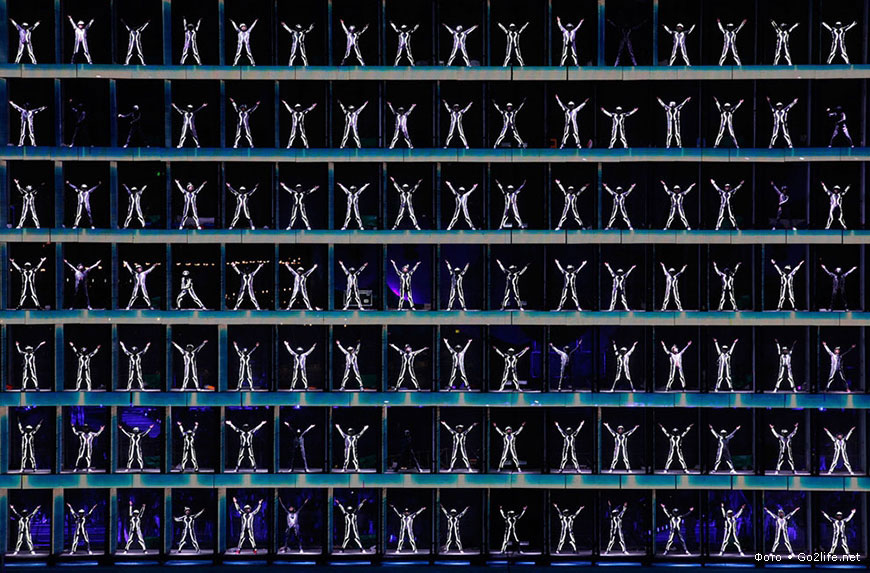 At the opening ceremony of the 26th Universiade Games, a sporting event for university athletes. 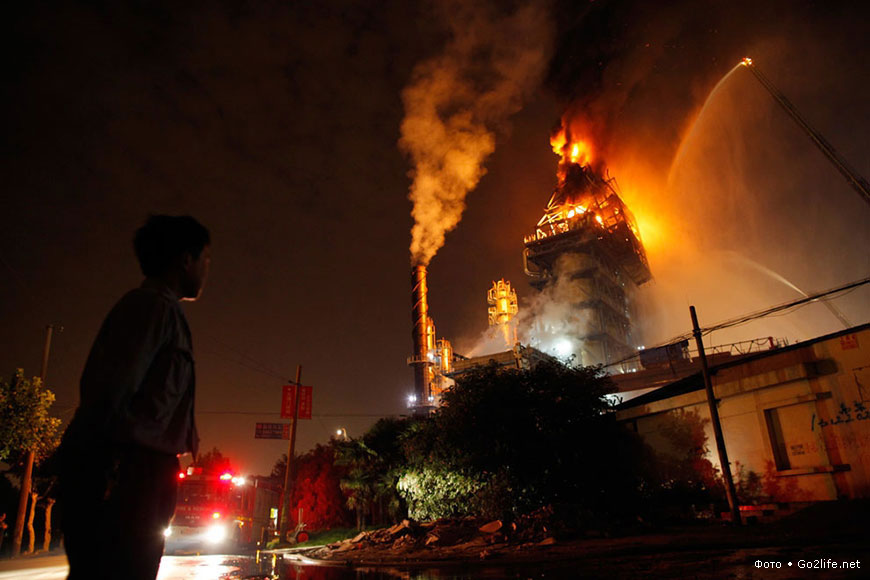