In the Australian Northern Territory about 320 km south of Darwin is the 11,000-strong town of Catherine, through which the river of the same name flows. The town is a thriving regional center as well as a major tourist attraction. Nearby is the unique Katherine-George National Park.

The area has been home to the native Javoyne tribe for over a thousand years. For these people, the watercourse was a rich source of livelihood. White settlers first crossed the Catherine River in 1844. European colonization did not begin until 1872, when the land telegraph was completed. The first shepherd to settle there was Alfred Giles, who built Springvale Manor on the banks of the river. Today this ranch is an important historical monument, even the most memorable in the entire Northern Territory. On its land is a tourist camp.

Although Katherine has a population of only 11,000, it is the third largest town in the Australian state. The town lives mostly off mining, livestock production, and, more recently, growing tourism. The nearby large military airbase is also a big attraction.

Just 30 kilometers from the city begins the borders of the famous Katherine Gorge National Park, which locals often refer to as “Nitmiluk.” The name Nitmiluk means “The place where the cicadas dream” in aboriginal language. This park borders Kakadu National Park to the north, where the Catherine River originates. It is this river that has created a total of 13 beautiful gorges in the local landscape, which are separated by rapids and waterfalls. Along a 50-kilometer stretch of river, these ravines have formed summer showers impacting the 650-million-year-old red sandstone . Today, the deep canyon radiates tranquility, though it is a popular destination for many tourists. 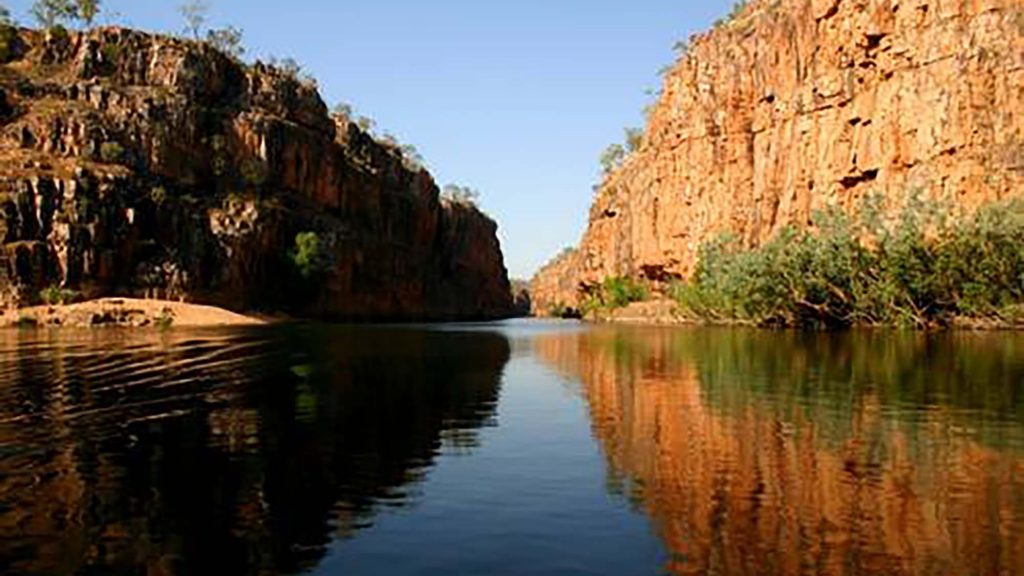 The best way to visit the park is by boat or canoe, which you can take to the ninth canyon. The boat trips are organized by the Javonians, who own and operate the park through the Northern Territory Parks and Wildlife Commission. Part of the trip is swimming in the lakes and a short tour of the surrounding area. But you have to be careful, as there are sea crocodiles living here, so access to some beaches is prohibited. In order for people to swim in some places, crocodiles are trapped. Some parts of the park are difficult to get to, so the only way to visit them is by helicopter flight.

For hikers, there are marked trails in the park. In total there are about 100 kilometers of these trails that lead visitors to the most interesting places. They vary in length and complexity, you can choose from sightseeing tours, and one-hour walks, which can easily be taken by almost anyone. For long hikes you can take the long route of 72 km, leading to the beautiful Edith Falls. They are also easily accessible by car on the Stewart Highway.

In the northern Australian state of Queensland is Cooktown, which is said to have been the first place on the Australian continent where British Royal Navy officer and famous sailor James Cook and his ship landed, albeit unintentionally. So the town bears his name to this day. On April 19, 1770, Captain James Cook and his crew appeared off the coast of Queensland. Then his ship Endeavour, through carelessness, struck a coral reef, causing the ship’s bottom to burst .

Cook was forced to spend six weeks in the area before his ship was repaired. He had plenty of time to explore this hitherto uncharted area. Together with the surrounding islands it was later declared a British colony. A small settlement grew up on the site where Cook’s ship was repaired and was named after its founder. It thus became one of the oldest in Queensland and the first white settlement in all Australia.

Over time the settlement developed into a small town which, like many others in the region, fell during the gold rush. Gold was discovered in the nearby Palmer River in the 1970s. The current 2,000 residents are only half of the original 4,000 people who lived here. Today, Cooktown, just a sleepy little town, enjoys its former glory and owes its existence mainly to tourism.

Many historic homes remain here, such as Westpac Bank with its stone columns supporting a porch adorned with iron mesh. Another important historical monument is the monastery, built in the 1980s, which now houses the James Cook Museum. You can even see the old anchor from Cook’s famous sailing ship Endeavour. 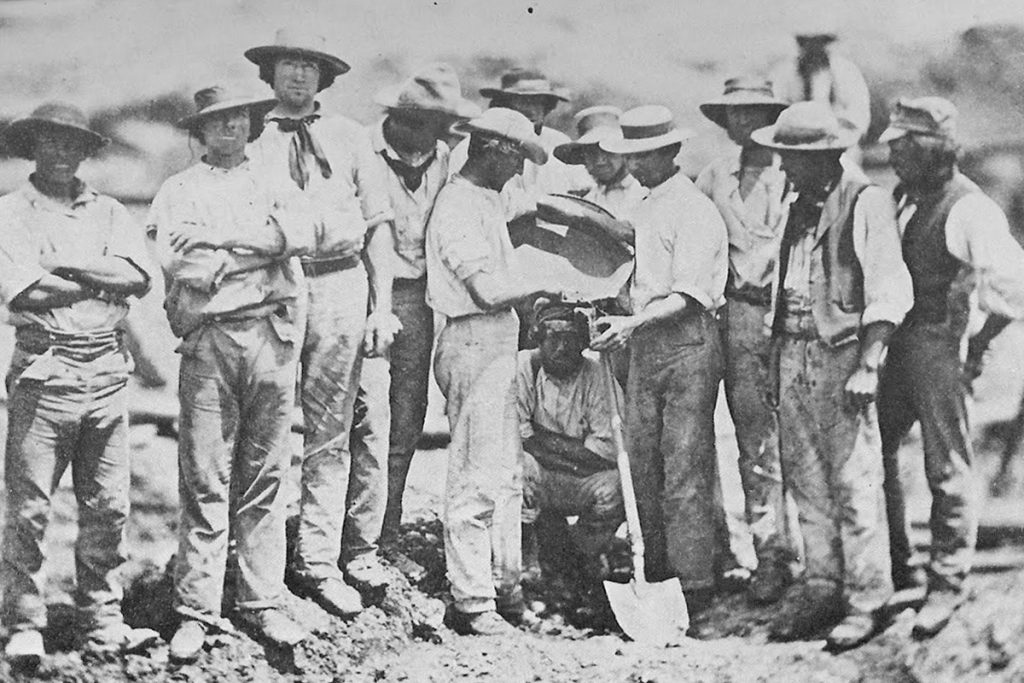 The city’s cemetery has two crematoriums, a memorial and tombstones that are a sad testament to the fate of many Chinese who also came here in the 1970s in search of gold. They faced the hatred of European settlers for fear of losing their wealth and status. Just outside the town there is also an old bush cemetery, which is divided into separate sections according to the faiths of the deceased.

Today many ships, from ordinary barges to luxury yachts, are moored at the pier in the bay. They are mostly inhabited by vagrants and adventurers traveling the world. However, there have been a few occasions when some have stayed for a few years, while others have stayed for good. They were attracted by the local daily way of life, the beautiful nature, the warmth and, of course, the friendly and kind people of Cooktown. Near the bay is a beautiful park with a monument commemorating Cook’s fateful landing . The place is decorated with a statue of this sailor. 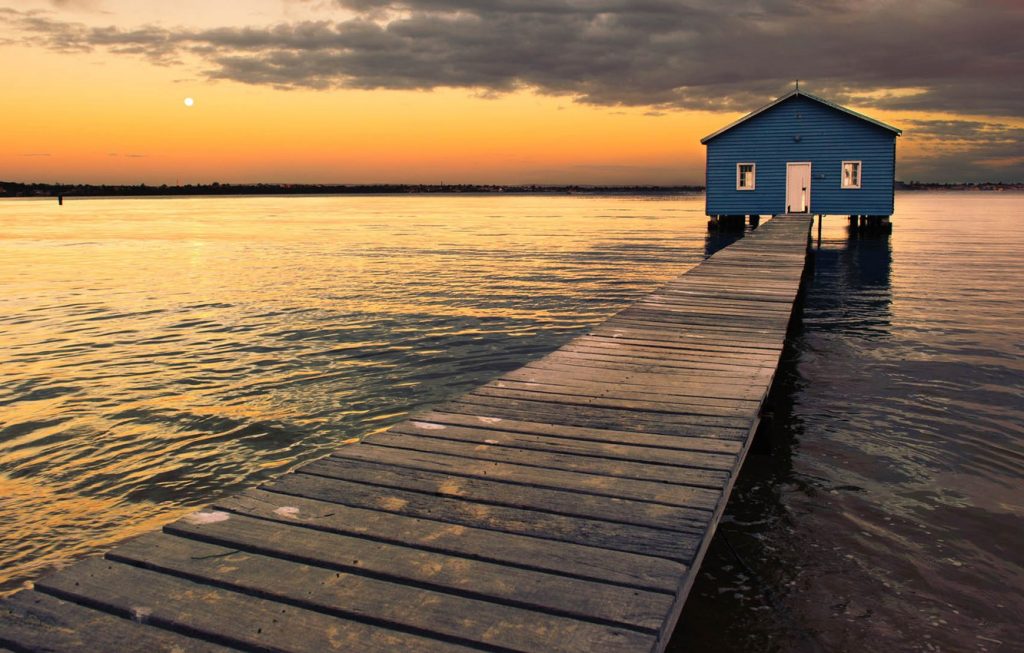 But in the park there is also a cannon, which has an interesting story. On 10 April 1885 the local Queensland councillor asked for a supply of arms and ammunition in case the Russians invaded Cooktown. As a reason, they stated that the town was totally unprotected from potential intruders and needed to be guarded.

The Prime Minister, based in Brisbane, heard their wishes and ordered 1 cannon to be cast in 1808 in Carrone, Scotland, 3 cannonballs, powder, 2 shotgun shells and one officer of Her Majesty’s Army to send everything. Whether the Prime Minister at the time really thought this equipment would protect the people of Cooktown from invasion, or whether it was just a joke on his part, we can only guess today.

READ
Holidays on the island of Tenerife, Spain

The so-called National Bicentennial Trail ends (or begins) in Cooktown, a marked 5,330-kilometer hiking route through Australia. It follows its east coast, sometimes inland, and ends in Victoria, in a settlement called Hillsville , behind the Great Divide Mountains. The trail can be hiked, biked, or horsebacked, it is up to the hikers to decide. It is one of the longest marked trails in the world.

Between Cooktown and Bloomfield is Blue Mountain National Park, named after the huge black granite boulders. They formed underground about 260 million years ago and gradually came to the surface as erosion developed.