In the municipality of Los Realejos in the north of Tenerife alone, there are about a hundred holidays a year: more than anywhere else in Spain. Canarians love holidays (here they are called fiestas) and respect tradition, so almost every day on the island somewhere celebrate something. But a holiday is not the same as a holiday. There are large-scale and spectacular fiestas, and there are local and modest, interesting only to the local community. We will tell you what you need to know about the holidays in Tenerife in the first place, and information about other noteworthy dates you can find on our forum.

Cavalcade of the Magi

In Spain, historically Christmas presents are delivered to children not by an alien clone of Santa Claus named Pope Noel, but by three biblical wise men – Melchior, Gaspar and Balthasar. The obedient and diligent children on the morning of January 6 will find the previously requested iPhones from the wise men, and the bullies and the truants will find coal (used to be real, today it’s a sweet imitation). The Magi arrive from further afield the night before and move through the streets in a solemn cavalcade (Cabalgata de los Reyes Magos), accompanied by an entourage, greeting spectators and scattering candy. The procession is fun and noisy and recommended for children. 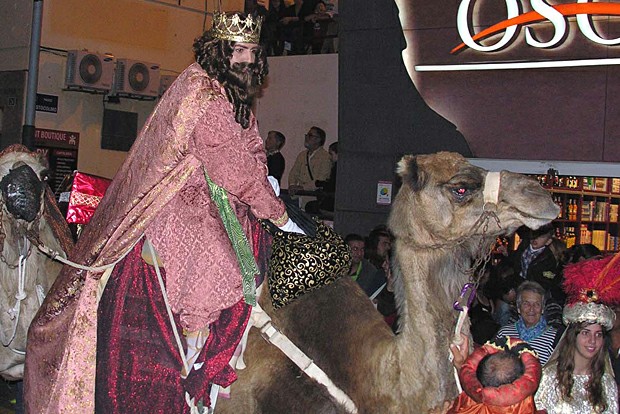 The largest parade will be in Santa Cruz. Tourists in the south can see a “simplified version” in Los Cristianos, the cavalcade will start from the port around 7 pm. It is always January 5.

Carnival in the capital of Tenerife is the most important cultural event in the life of the island. Each year it gathers thousands of participants and dozens of times more spectators, claiming to be the second in the world after the carnival in Rio. The carnival program usually stretches for a month and includes various entertainment events, some of which are not Spanish-speaking tourists will not understand. But all the most interesting things that do not require translation happens in a week. The key action of the carnival is the main procession, a must-see. It is preceded by the election of the Carnival Queen and the first, “small” procession. Symbolically say goodbye to the carnival with a ceremony of burning a giant cardboard sardine. The carnival in Santa Cruz at our website has a separate page: Carnival in Tenerife. 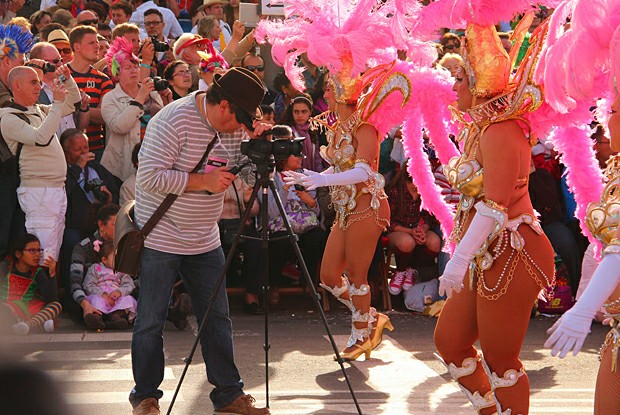 City of Santa Cruz de Tenerife, February-March. The dates are tied to the Catholic Easter.

The main carnival procession takes place on “Fat Tuesday” (see table). The election of the queen and the first procession are on Wednesday and Friday of the previous week, respectively, and the sardine is burned the day after the main procession.

Holy Week (Semana Santa) is the week before Catholic Easter. It is a time of solemn religious processions that take place all over the island every day. On Friday, when tradition commemorates the death of Jesus on the cross, the largest processions can be seen in the city of La Laguna.

The people in the tall pointed caps with slits for eyes are not followers of the Ku Klux Klan. They are Nazarenes – repentant sinners, and their intimidating outfits are really meant to protect the mystery of confession. God only knows who’s hiding under the hood and what sins they’re covering up. The Nazarenes represent different Catholic fraternities, each with its own color of hoods.

Today, Easter processions have lost much of their original meaning, and ordinary, often non-religious, townspeople are hired as penitent sinners for the ceremonies. Nevertheless, it is worthwhile to see it for yourself. There is something about it that gives you the creeps. Especially at night, when the procession takes place by candlelight. 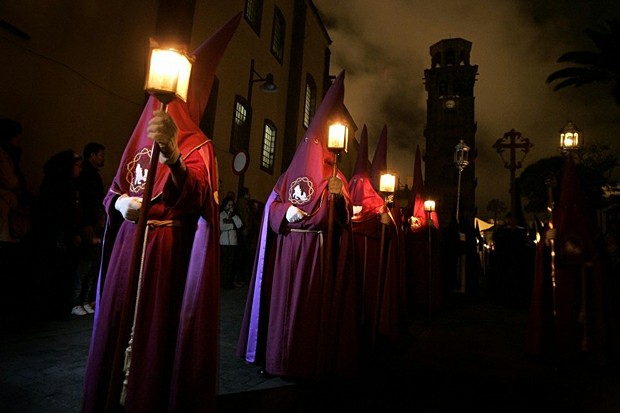 City of La Laguna, Friday before Catholic Easter. March-April, the date is floating.

Traditional in spirit, but rather original in content, the romeria in honor of the Apostle Mark (Spanish: San Marcos Evangelista), the patron saint of the municipality of Tegueste. 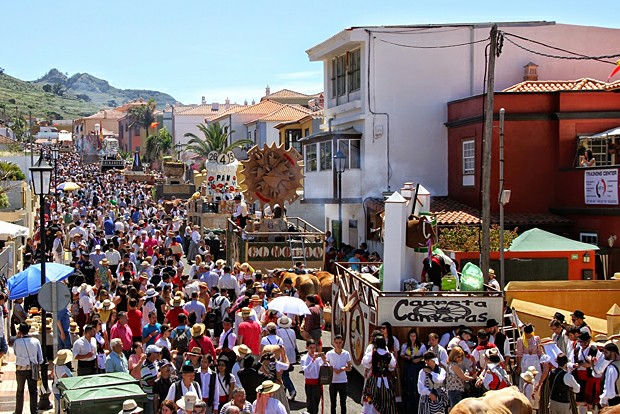 This holiday is interesting to us first of all with the fireworks in the town of Los Realejos in the north of the island. The organizers claim it is the best in Europe. You could argue with this statement, but objectively the fireworks are really excellent. 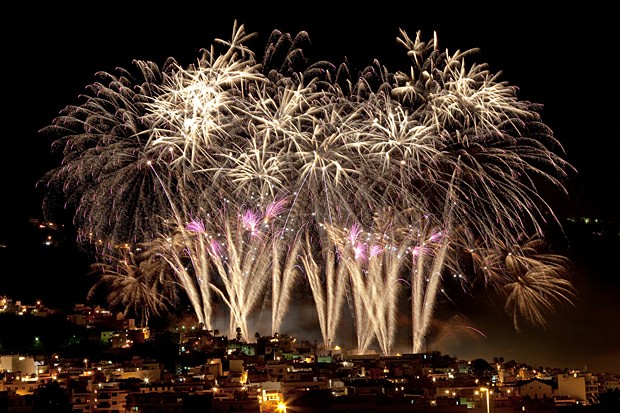 Los Realejos, always on May 3. Arrive by about 9 pm.

A large procession with songs, dances, and refreshments in honor of St. Isidor the Peasant (Spanish: San Isidro Labrador), the patron saint of all rural toilers. During his lifetime, St. Isidore performed many miracles; Canarians have always believed that even after his death, he continues to help people. 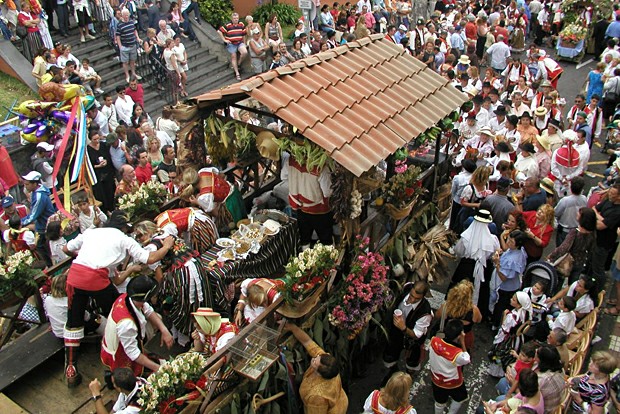 1. City of Los Realejos, last Sunday of May. The beginning at 1 pm.

In Los Realejos the procession is more representative.

On the eighth day of the Catholic feast of Corpus Christi, the streets of La Orotava are covered with motley carpets of flowers, sand, stones and painted sawdust. From the early morning the whole families of the city will meticulously work on the sidewalk, diligently trying to bring the planned plots to life. But the biggest and most spectacular carpet is laid out on the square in front of the City Hall. Dozens of craftsmen worked on it for a month and a half, using only colored volcanic sand from the volcano Teide.

In the evening there will be a festive procession through the city, under the feet of which all this beauty will fall into oblivion. So you only have one day. 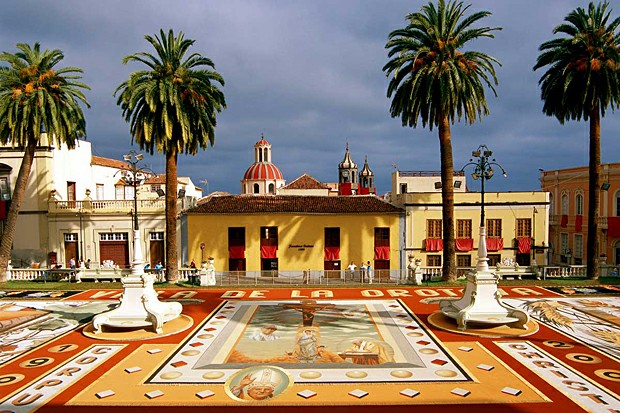 The greatest interest of tourists is traditionally the process of creating carpets, so the maximum number of spectators is 10-13 hours.

Like the Slavic Ivan Kupala, the Spanish feast of St. Juan dates back to pre-Christian times and is associated with the summer solstice, the shortest night of the year. In our hemisphere it falls on June 20, 21, or 22 in different years. After the adoption of Christianity the ritual part of the feast was timed to the birthday of John the Baptist, and “was scheduled” for June 24. So there is no strict astronomical correspondence to the solstice anymore.

Playa Jardín in Puerto de la Cruz is the focal point of the St. Juan’s Night celebrations in Tenerife: this is where you have to be seated from the evening. At midnight thousands of people will rush into the ocean, because only today the water has magical powers and protects from disease and misfortune for the whole next year. And the lights on the shore are designed to ward off all sorts of evil spirits, this night is especially insidious and active.

Saint Benedict of Nursia (Spanish: San Benito Abad) is said to have had the gift of healing and even resurrection. The Romeria San Benito in La Laguna, one of the most notable on the island, is dedicated to him. 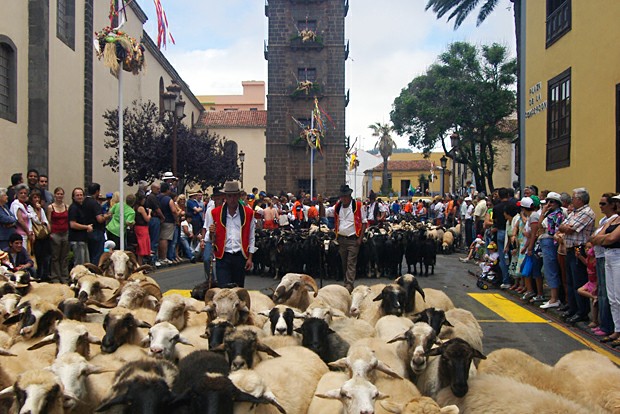 City of La Laguna, second Sunday in July. The procession begins at 1 p.m. from the church of Iglesia de San Benito.

Fiesta in Puerto de la Cruz in honor of Virgen del Carmen, the revered image of Our Lady, patroness of fishermen and sailors. The celebration culminates in a procession from the church of the Iglesia de Nuestra Senora de la Pena de Francia to the fishermen’s harbor, where the statue of Virgen del Carmen will take a short boat trip along the coast to the applause of the many thousands gathered. 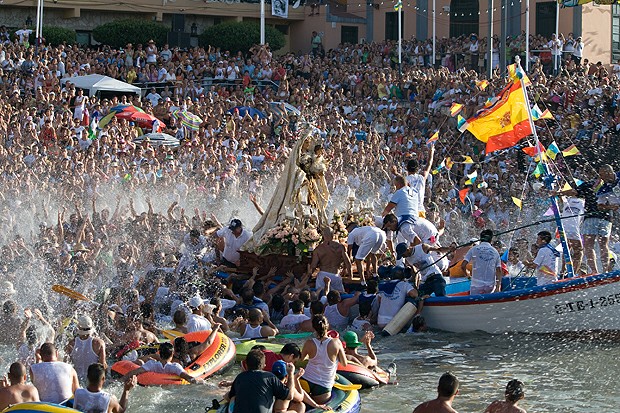 The town of Puerto de la Cruz, fishing harbor. Tuesday preceding the 16th of July. The ceremony begins at the church at 5:30 p.m., followed by the procession to the harbor.

According to legend, the Guanches found a dark wood statue of the Virgin Mary on the beach before the Spaniards colonized the island. Read more about it on the page about Candelaria. Today Virgen de la Candelaria (or Black Madonna) is the patroness of the Canary Islands, the main shrine not only of Tenerife, but also of the entire archipelago.

READ
The 25 most beautiful places to visit in China

Thousands of pilgrims come and worship the Black Madonna on the day of her veneration (in fact, all the way is to be crossed on foot). Dressed as Guanches, Canarians will reenact the scene of the acquisition of the statue by the natives, and there will be fireworks. 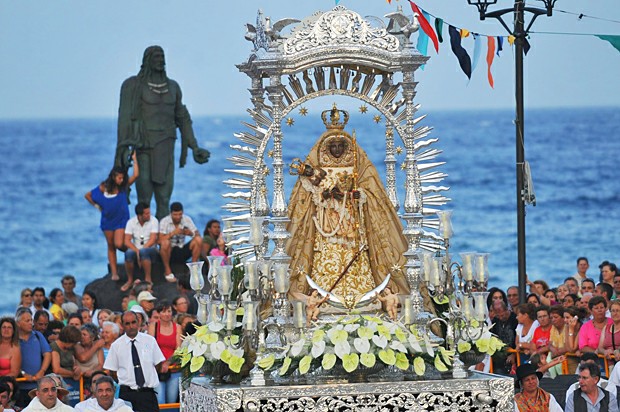 City of Candelaria, August 14. Arrive by 5 p.m., all the fun begins in the evening.

During 1601-1606, a plague imported from across the ocean ran rampant in the port city of Garachico and the surrounding area. It is said that the epidemic was overcome only through prayers to St. Roch of Montpellier, the protector of this insidious disease. Since then, every year on St. Roch’s Memorial Day, the city’s residents hold a traditional street romería. 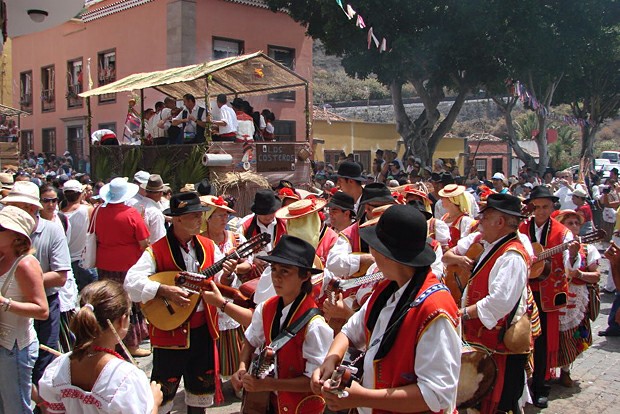 City of Garachico, August 16. Starting at 1 p.m. at the old harbor on the western edge of town.

In the mid-18th century, the inhabitants of the small town of Arafo on the east of the island were left without water: the only natural spring in the ravine was covered by a landslide. But to help came St. Aurelius Augustin (Spanish: San Agustin) – this romeria is dedicated to him. 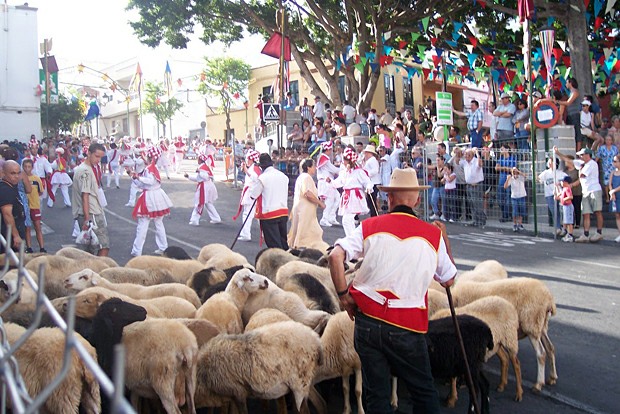 City of Arafo, last Saturday in August. Start at 17:00 from the chapel of Capilla de la Cruz.

The oldest pilgrimage in the Canaries in honor of the Virgin Mary, with more than 120,000 participants in 2014. The procession with the statue of Virgen del Socorro will proceed from the church of the Iglesia de San Pedro in the center of Guimar to the coastal village of El Socorro. Here, on the beach, according to tradition, a statue of the Black Madonna was found by the natives of Tenerife (see Fiesta de la Candelaria above). A small theatrical performance by local amateurs will be dedicated to this event. 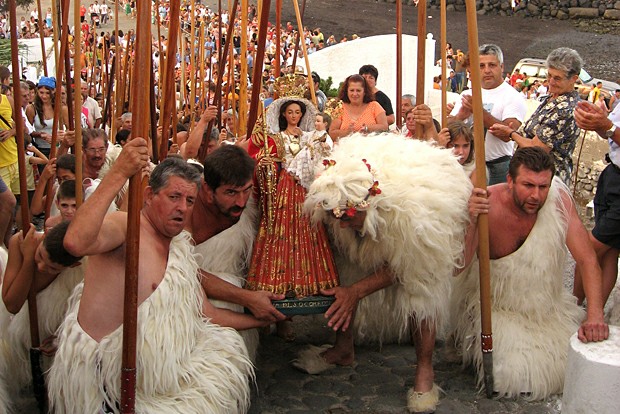 City of Guimar – village of El Socorro, September 7. The procession starts at 7 a.m. from Guimar and reaches El Socorro at 11:00-11:30. The presentation in the afternoon.

The wooden crucifix Santísimo Cristo de la Laguna is the most important shrine of the Canary Islands, along with the Black Madonna of Candelaria. The cross is kept in one of the monasteries of the city of La Laguna and leaves its abode for five days during the Fiesta del Cristo. The return of the crucifix back to the monastery is accompanied by a solemn procession with civil, military and ecclesiastical superiors and a special envoy of the royal family. In the evening there will be another procession, with fireworks at its conclusion. 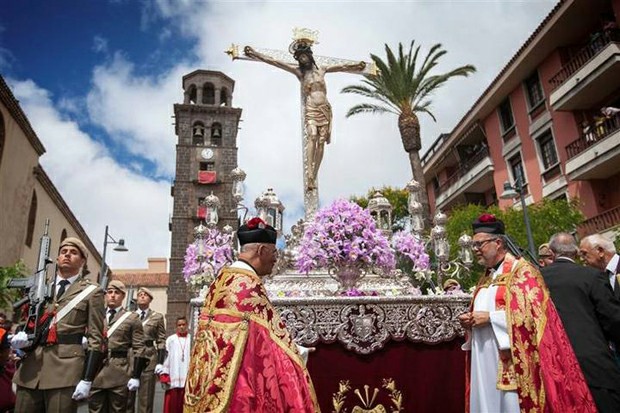 City of La Laguna, September 14. The return of the crucifix begins at 11:00 at the cathedral, from where the procession will proceed to the monastery of San Miguel de las Victorias. An evening procession from the monastery and back after 7pm.

Nothing particularly remarkable happens on New Year’s Eve in Tenerife. The hotels have a celebratory dinner (“buffet” will be richer than usual) with a mandatory surcharge and a dreary show program. Some street restaurants will offer to celebrate New Year at their place for a fixed fee, including dinner and an unpretentious show. The nightclubs are more cheerful, they have a more creative approach to the process.

In the resort area in the south of the island, the free public events organized by the municipalities are reduced to a music program and fireworks at midnight. People eat 12 grapes at the chime and go to sleep. It’s not customary to stay out all night. 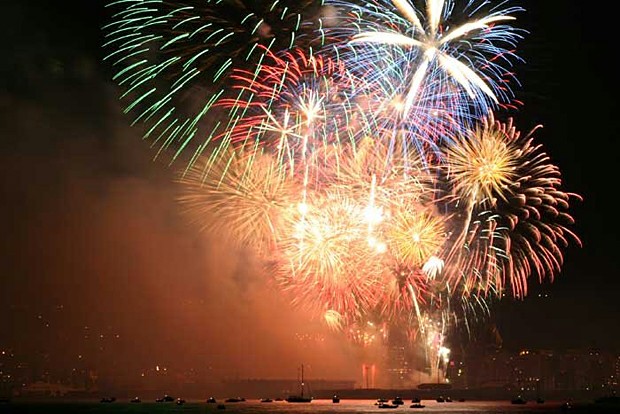 In the south, tourists have two places to choose from: see what’s more convenient for you. 1. Los Cristianos, by the Cultural Center (location). 2. Costa Adeje, Plaza San Sebastian in the farthest part of the resort. The new location is Plaza de Espana in Adeje (location). December 31, beginning at 10:30 pm.