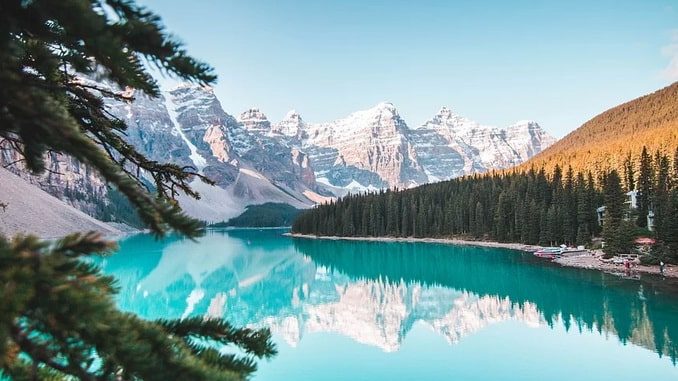 Canada : where located, capital city, flag, population, borders. Form of government and administrative division, major cities. What does the Canadian Maple Leaf mean and why has it become the symbol of the country? As well as the key attractions – in the informative and cognitive material Eurotraveler.ru.

Canada, “Maple Leaf Land”, is a state in North America. The second largest country on planet Earth. And, presumably, one of the richest in terms of mineral resources not yet found.

The maple leaf is the official symbol and highly recognizable emblem of Canada. It is depicted in the center of the national flag and is adorned, for example, on the uniforms of the national teams – have you heard anything about hockey? 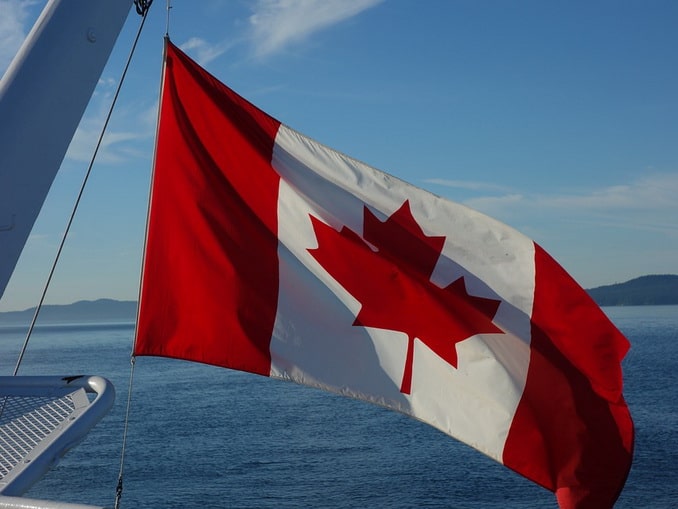 It is not known for certain why the leaves of a maple tree became the official symbol of Canada in 1965. According to one version, Canada has as many of them as any other country. Maple syrup is produced in enormous quantities and provides a significant part of the export revenue to the treasury.

But the more likely one seems to be: in English-speaking countries, maple is believed to ward off demons and evil spirits. And once this tree was dedicated to Dana, the Celtic goddess of fertility. It was also known as the tree of tolerance.

The population is not as homogeneous as in most European countries: Canada is a country of immigrants. Up to 300,000 people still come here every year in search of well-paying jobs and better living conditions.

The majority of Canada’s population – about 38 million people in 2020 – are descendants of immigrants from France, Great Britain and Ireland.

Therefore, English and French have official status. Languages of local Indian tribes, who inhabited the territory in pre-colonial times, are recognized as regional languages. About 10% of the population is of German descent, and 4-5% are of Italian descent.

The capital of Canada is Ottawa, and the most populous city is Toronto.

On a map, Canada does not look enormously large. In fact, Canada is second only to Russia in size. Canada is surrounded by three oceans: the Arctic, Atlantic and Pacific Oceans. But there is only one land border: with the United States of America.

Canada is made up of ten provinces and three territories. However, only one of the provinces (Quebec) is considered to be predominantly French speaking. Quebec is the largest province in the country. It has a population of about 9 million people, the main cities being Montreal and Quebec. The most populous province is Ontario, with the largest cities of Toronto and Ontario. 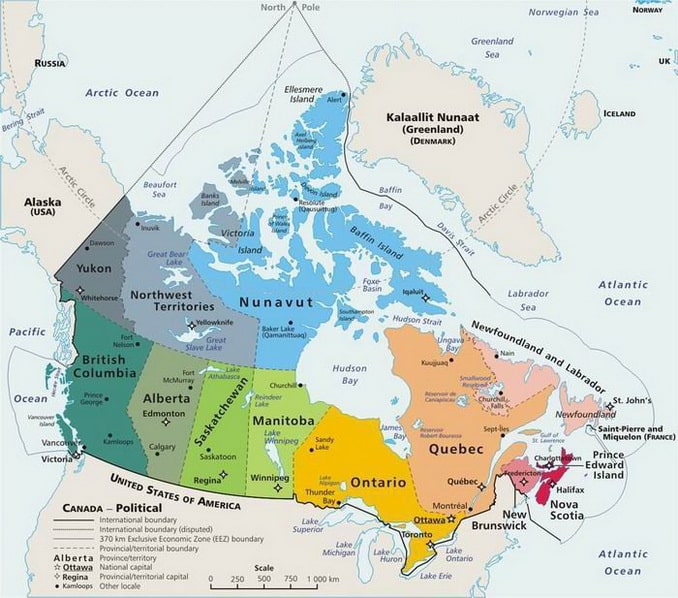 Canada is officially a constitutional monarchy, a member of the so-called Commonwealth of Nations. That is, a community of independent states that at one time were colonies or dominions of the British Empire. Among its members are, for example, India, Australia and Pakistan.

The real executive power is in the hands of the cabinet, headed by the prime minister, who is the leader of the majority party in the House of Commons. The legislative branch is represented by a bicameral parliament (Senate and House of Commons).

The Senate consists of 105 members appointed by the governor general on the advice of the prime minister. The House of Commons has 305 members elected by direct universal suffrage (every 5 years).

Canada has a strong economy. In 2019, the country’s nominal GDP was $1.9 trillion U.S. dollars, which translates to approximately $51,000k per capita. Services and services account for the vast majority of the national product (76%). Inflation is negligible at less than 2%).

Also, the unemployment rate is not too significant (about 6-7% of the working-age population).

READ
Getting around Tirana, Albania

Toronto, on the shores of Lake Ontario, is Canada’s most populous city. About 2.7 million people live here permanently. Montreal (1.7 million inhabitants), the largest metropolis in the province of Quebec, is in second place.

Calgary, Alberta (1.2 million residents) is third. Metropolitan Ottawa (930,000 residents) in Ontario does not yet make it to the top three.

For Russians and probably Europeans even, tourism and Canada are not the most overlapping concepts. Working in Canada is understandable! One of the richest countries (average annual income of its citizens is $50,400 in nominal prices) is in fact a migrant’s dream.

But tourism? There are not many beaches, and frankly tropical ones are not there at all. Cities and villages are also not able to treat the traveler to an abundance of historical monuments – Canada was (rediscovered?) Frenchman Jacques Cartier only in the 16th century. So what, then, do tourists go to see? The number of tourists is staggering: about 35 million annually!

Let’s not go against the truth, if we assume that the main thing to see in Canada is its natural beauty.

At the top of the list should definitely be the grandiose, the largest in the world (in terms of the volume of falling water), Niagara Falls on the border with the United States. 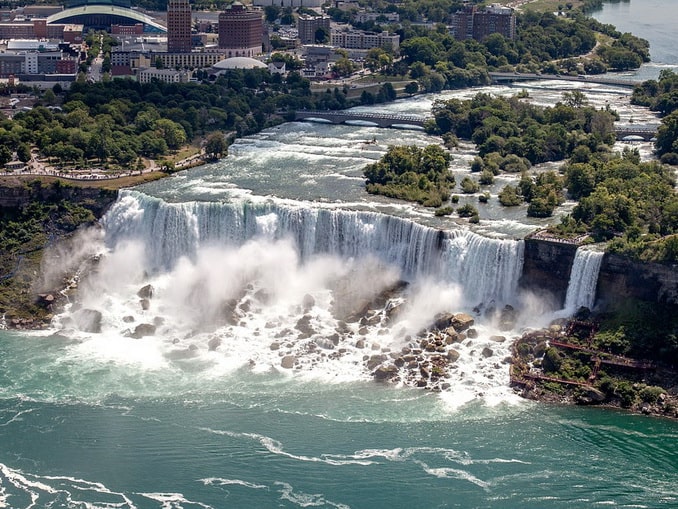 The famous Bay of Fundy in the province of Quebec with its largest tidal amplitude in the world. The ocean can rise as much as 18 meters here! Even in peak years, this is something that the legendary Mount Saint-Michel in France never dreamed of.

The island of Newfoundland, where in the spring hundreds of thousands of tourists flock to see the flotillas of icebergs that have broken away from the ice belt somewhere in the Arctic or near Greenland and traveled to the warm waters of the Atlantic. Some are larger than the one that sank the Titanic and cling to the coastal shoals, thus remaining in sight for days!

READ
The Cordilleras of Peru - landscapes that stay in your heart 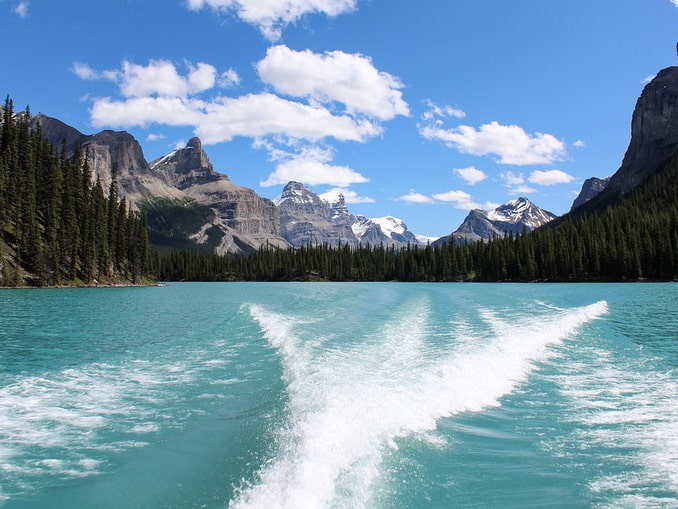 For example, the whole relatively new (1978) Viking village of L’Anse aux Meadows, which by its very existence belies the long-held belief that America was discovered by Columbus.

There are more references to this European country in Canada than anywhere else in the world. Montreal, for example, is the largest French-speaking city outside of France, and to its citizens, it is very much Paris.

Metropolitan Ottawa, with its beautiful Parliament Hill. Toronto, whose skyscrapers never let you forget that you are, after all, in North America, where buildings prefer to grow upward rather than sideways. 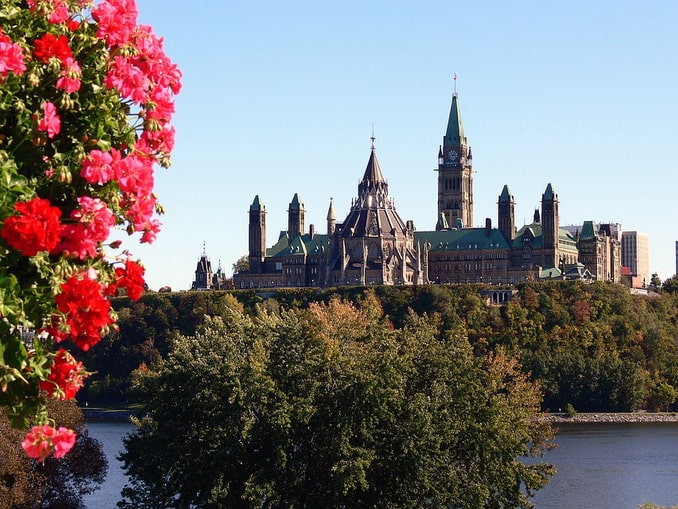 Quebec, one of the oldest European settlements in the New World (founded in 1608), is beautiful. Walking around Quebec’s Old Town (and it’s a UNESCO World Heritage Site), it’s easy to imagine yourself somewhere in Normandy. And the imposing Chateau Frontenac, guarding the course of the St. Lawrence River, could easily pass for a royal castle.

Located on the Pacific coast of Canada, Vancouver is the city with the mildest climate in the country. The weather here offers amazing contrasts. Harsh winters don’t negate the opportunity to grow grapes and swim for three months in the summer.

Just tens of kilometers north of the bay begins the kingdom of snow and ski slopes!

Why is Canada the land of the maple leaf?

It was winter (in the previous post – https://www.passionforum.ru/posts/56597-nachnem-s-z. ), and now about autumn as promised.

Autumn is beautiful here – red and yellow! And it is because of the maples! There are a lot of them here. And one more fact – for example in Russia birch sap is popular, and Quebec is famous for its maple syrup. At the end of winter-beginning of spring (it all depends on the weather, when the sap begins to secrete), there is even a very popular Quebec family holiday – Cabane à sucre, which literally translates as sugar barn. 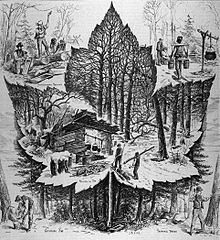 Смысл в том, что этот самый сироп льют на снег/лед и он застывает и его >on a stick, a kind of lollipop in Russian. In addition to the tasting of maple syrup, the schedule of the feast includes a lunch with traditional Quebec dishes. It can be scrambled eggs, ham, potatoes, and fèves au lard, a traditional dish of the common people, pioneers (meaning pioneers), hide hunters, and lumberjacks. Fèves au lard – These are beans stewed with lard and seasoned with molasses (treacle) or maple syrup. On the holiday, it’s maple syrup, of course.

Something about my fall is flowing smoothly into spring! Ha ha ha! I wrote about winter, now I’ve managed to touch on fall and spring.

And now Canadian maple autumn in all its glory!

This is how we have autumn! 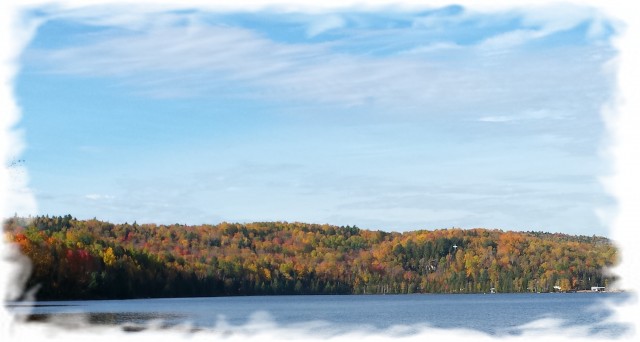 The forest around my beloved Morgan Lake in Rawdon. 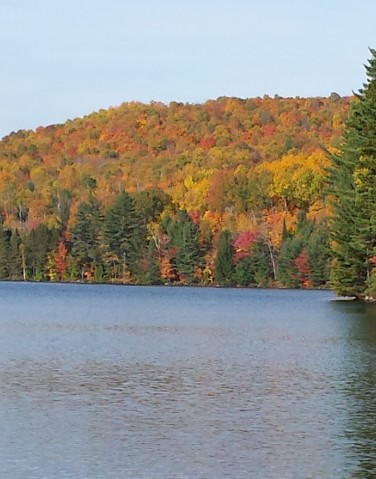 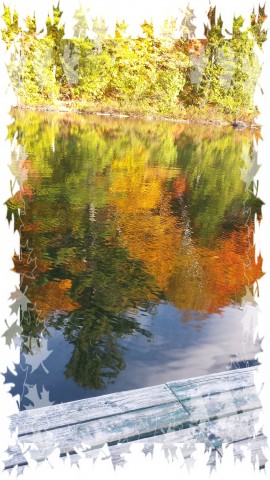 Here they are the golden fall trees reflected in the lake! 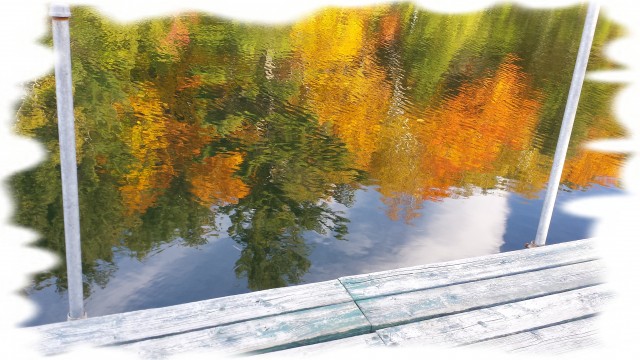 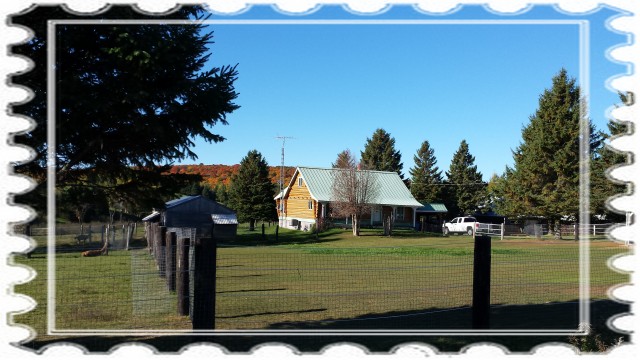 Fema where the llamas live. 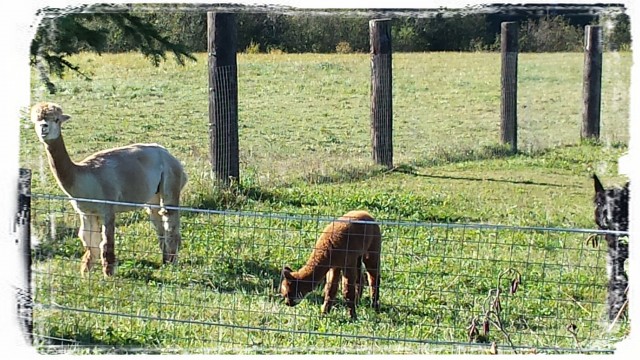 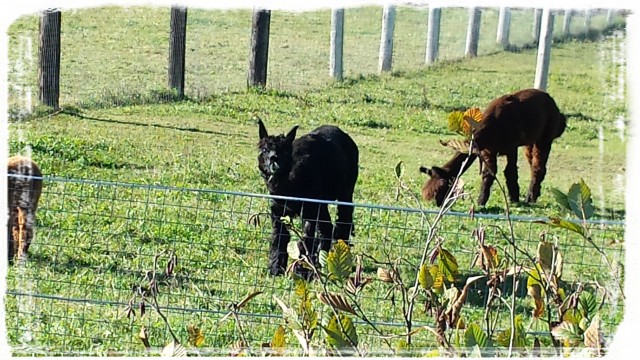 And this black little llama was so curious – while we were pinching grass he looked us closely – tilted his head this way and that way! 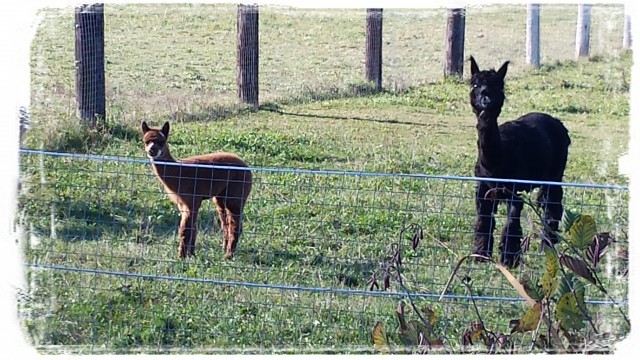 And what ears they have! 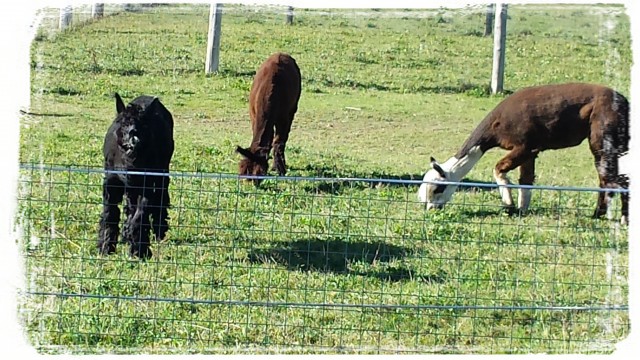 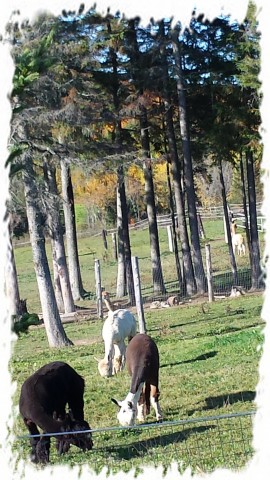 He seemed to have seen enough! 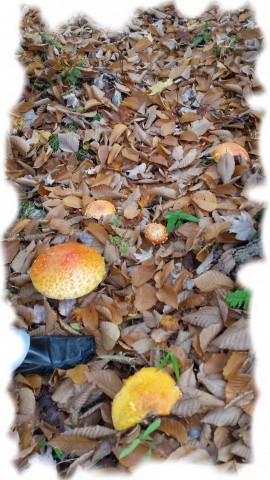 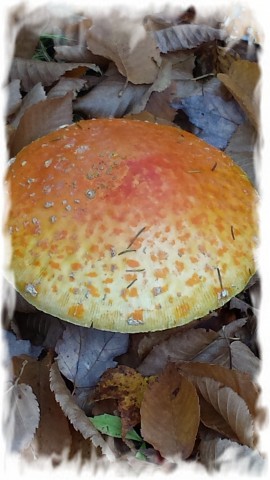 A fly agaric! We have been watching them for 3 weeks – nothing happened to them, they wilted or grew old, they only grew more and more beautiful, bigger and bigger! Already grown to the size of a frying pan! Look at the previous photo – you can see how big it is compared to my husband’s shoe. Eh, would be edible. 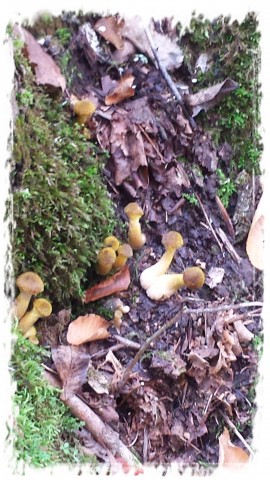 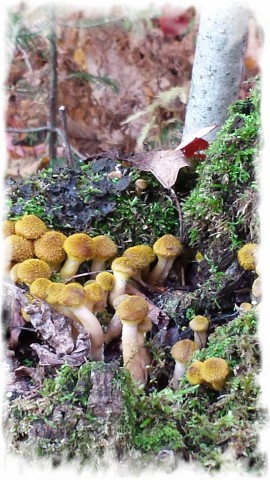 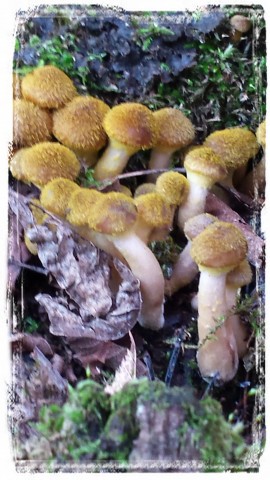 Irina, very interesting writing. I didn’t even know about the holiday. How do you make maple syrup – do you juice it with sugar? Maple trees are very beautiful in the fall. My husband wanted to plant a maple tree with red leaves. We went especially to the woods in the fall, looking for a small red one. We found it, dug it out, planted it… But it turned out to have yellow leaves. Do you pick mushrooms? Is it a custom among you?

Maple syrup (English maple syrup, French sirop d’érable) is a sweet syrup made from the juice of maple trees. Maple syrup is often used as an additive to pancakes or waffles, in the preparation of many other dishes, as an ingredient for baking or desserts. Real maple syrup has a slight woody flavor. Most maple syrup is made in Canada. Maple syrup and sugar maple are symbols of Canada and several U.S. states, particularly Vermont. The sugar maple leaf has become Canada’s national emblem. Maple sap is usually harvested in early spring, from late January to late April. This is the so-called “weeping plant.” It is quite similar to the same phenomenon in the birch. The harvesting process begins in the season when the buds are swelling and the air temperature is higher than zero during the day and lower at night. This is very important, because it is at this time the tree gives out more sap. The best and most favorable time is March. It is believed that the sap at this time is particularly sweet. To collect sap in the trunk of the tree bore holes with a diameter of 0.3-1.5 cm and a depth of 2-5 cm, and inserted into them the tube through which the juice flows into a special vessel. Then the juice is thickened by evaporation, turning it into maple syrup. The juice is evaporated on large, flat, heated surfaces. No sugar is added. Since the juice consists of 96% water, it takes many hours to evaporate the water and obtain the desired syrup concentration. On average, 40 liters of sap produces 1 liter of syrup or soft maple sugar. Sugar maple grows naturally only in North America. Maple syrup was originally harvested and used by the indigenous peoples of that continent. The practice was later adopted by European settlers, who gradually improved their extraction methods. About 80% of all maple syrup in the world is produced in the Canadian province of Quebec. Vermont is the largest producer in the United States, producing about 5.5 percent of the world’s supply.