Australia is a very interesting continent. Because of its remoteness from the Old World, it has been explored in stages, which has shaped the lifestyle of the settlers and the appearance of modern cities. In addition to the mainland attractions do not forget about the coast, which has always attracted fans of beach holidays. If you are one of these tourists, you might want to check out a town called Broome.

Broome is the center of County Broome and is situated in Western Australia, in the north-west coastal area of the Kimberley. The city traces its history back to 1880, but is very modest in size. Its features according to the 2006 census had 11547 inhabitants, today their number still does not exceed 14 thousand citizens.

The southeastern part of the city borders the vast Great Sandy Desert, which stretches far into the interior of the continent. City officials work hard to keep Broome from being swamped by brown sands. The long sandy beach, which is still remembered for the legends of the first pearl divers of the last century and the waters of the Indian ocean attract many tourists from all over the world.

In addition to tourism, the city continues to develop the industrial production of natural pearls, the largest in the world, which are very highly valued. Often called the Port of Pearls, Broome is home to many nationalities, pearl fishermen from Java and Japan, Malaysia, China, and many other countries have come here. And each nation has brought its own culture and gastronomic habits. 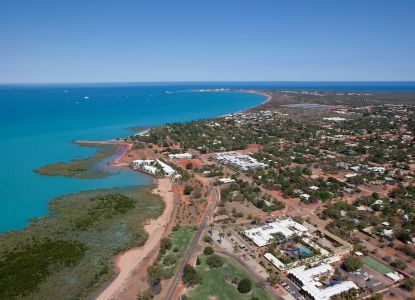 The city of Broome geographically belongs to the tropics, but in fact, the climate in the area of the city is quite arid. Almost all areas that are part of Australia’s tropics have two seasons: the dry and wet, and Broome is no exception.

The dry season is the clear days from May to November, when average temperatures don’t drop below 30 degrees Celsius. This time is considered the most comfortable for tourists. The wet season runs from December to March, with temperatures rising to 35 degrees Celsius, heavy tropical downpours all the time, and humidity everywhere. 76% of all precipitation falls within the city limits between January and March.

READ
Burren, Ireland: walk on the surface of the moon

What to see in Broome?

The most important tourist attraction in Broome, along with its recreational attractions, is Cable Beach. The beach is 7km long and takes up just under a third of the entire coastline, conveniently with a good quality road running along the entire beach. White sand and turquoise waters of the ocean – what else do you need for recreation? In addition, part of the beach has long been fond of Australian nudists. In addition, you can visit:

You can also book an excursion to the diamond mines, a camel ride, or a safari along the coast of the mainland. Many hotels offer boats and boats for trips or real fishing. You can also enjoy the festivals that are well organized in Broome.

The mix of Western and Eastern traditions and flavors has led to the fact that it is in Australia in Broome you can taste almost any cuisine of Europe and Asia. Most of the savory and interesting restaurants and cafes are located in Chinatown, but you’ll find plenty of mouthwatering establishments along the coast as well. Check out Cafe D’amore, The Green Mango Cafe and Sunset Bar and Grill, you won’t regret it.

The most convenient option is a domestic flight from Sydney or Melbourne, the city has a small local airport that only serves domestic flights. On your own, you can drive to the city coast at the coordinates 17°57′16″ S and 122°14′03″ E.

The town of Broome in Australia is a relatively safe community, there are no criminals left here that existed and terrorized society during the hand fishing for pearls and mother-of-pearl shells. You must be extremely careful when swimming from November to March, because the ocean waters are full of poisonous jellyfish.

The 8 most popular tourist attractions in Broome

Basking under the tropical sun and washed by turquoise seas, Broome is a remote tourist town and gateway to the natural wonders of the Kimberley region of northern Western Australia. The scenery along this stretch of coastline is stunning. Striking blue seas splash against reddish coastal cliffs, and a striking variety of shorebirds dot the tidal dams of Roebuck Bay.

The town was once the pearl capital of the world, luring many Japanese, Malay and Chinese divers who came here seeking their fortune. Today, visitors can explore this fascinating history in the city’s museum or on a popular pearl tour. Outdoor adventures run the gamut, from sunset camel rides along Cable Beach’s broad shores, to fishing, kayaking, whale watching and scenic seaplanes with spectacular horizontal waterfalls.

Spanning 22 kilometers, Cable Beach is an iconic string of dazzling white sand and turquoise sea. The beach takes its name from a communication cable laid between Broome and Java in 1889. Today, four-wheel-drive vehicles roll along the shore as sun-seekers search for the perfect stretch of sand – and there are plenty of opportunities to stroll. Be sure to bring an umbrella or awning; The beach sizzles in the middle of the day. Dangerous irukanji jellyfish inhabit the waters from November through May, but swimmers can fly along the shore at other times of the year.

Sunset camel adventures are one of the top destinations here, and many tourist brochures show photos of silhouetted figures along the shore on these graceful animals. After a day at the beach, sun-worshippers can refuel at the restaurant and café. Keep an eye on the tides; they can vary by as much as 9 meters.

Accommodation: Where to stay in Broome For an adrenaline-packed adventure, it’s hard to beat a scenic seaplane flight into a gorgeous horizontal waterfall. The falls are actually boiling tides, compressed through two narrow gorges. Trips usually entail a 90-minute flight along the red rocks and rocky islets of Western Australia’s northwest coast to Cape Leveque and then a water landing in Talbot Bay. From there, passengers usually board a jet boat for an exhilarating cruise over the Falls. Shark feeding and shark swimming add to all the excitement (swimmers can see the action from the safety of the shark cage), and a picnic lunch on the pontoon ends the afternoon. Be sure to check the tides for the best conditions before planning your trip.

3 Stairway to the Moon. About two or three days a month between March and October, locals and tourist herds City Beach for a mesmerizing site. As the full moon rises over Robaka Bay, its reflection shimmers off the huge tidal rafts, creating an optical illusion reminiscent of footsteps rising at dusk. The Mangrove Hotel overlooking the beach is a great vantage point. During the first two days of this popular Town Beach phenomenon, Staircase Markets where shoppers can stock up on handmade gifts and sample snacks from around the world (cuisine ranges from Thai and Chinese to laksa, satay and pizza). Live music provides a festive atmosphere. At other times, Town Beach is a local favorite of the popular café, where mom and dad can relax while the kids run around in the nearby water park. The striking contrast between the red cliffs and the blue sea of Gantheaume Point is sure to impress even veteran photographers. The point is located south of Cable Beach , about 6 km from the city. At low tide, dinosaur footprints, believed to be more than 130 million years old, are barely visible on the exposed reef, but visitors can see the plaster cast embedded in the top of the cliff. Those hunting for trails in the surrounding area should wear appropriate footwear for rock climbing. The lighthouse overlooks the Indian Ocean, with Ganteam Point Anastasia Basin at the end of the trail. A former lighthouse keeper carved this small stone pool so his rugged wife could bathe. It’s a great place to soak on a hot day. To the left of Gantheaume Point is a great fishing beach. Grab a baby crocodile, see the Rare Casuarina, or a community with kangaroos. At Malcolm-Douglas-Wilderness Wildlife Park, about 15 minutes from Broome, animal lovers can enjoy great views of some of Australia’s quirkiest and most formidable creatures and learn about their habitat and behavior. This park is also home to wallabies, dingoes, snakes and lizards, as well as a range of feathered critters, from emus to cockatoos to kookaburras. Staying to breastfeed at 3 p.m., when some of the largest crocodiles in Australia show their amazing flexibility as they push out food. About 5 minutes away, 12 Mile Bird Park has many exotic and indigenous birds representing 80 different species.

Location: 16km out of town on Broome Highway 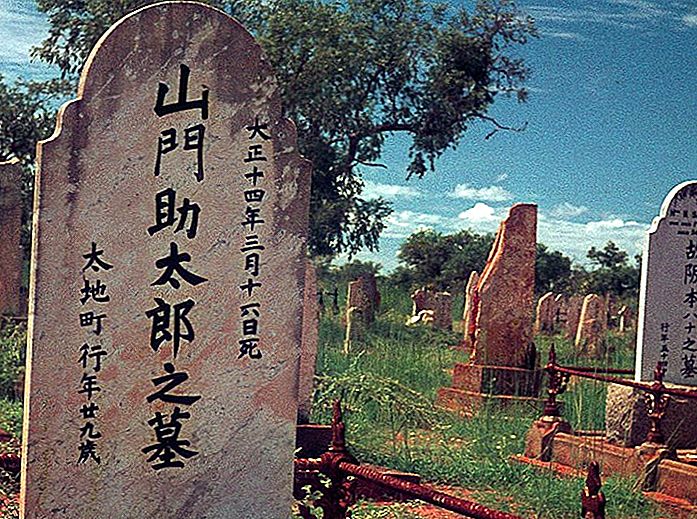 All newcomers should show up at the Broome Historical Museum to learn about the town’s fascinating history. Despite its small size, the museum features informative exhibits about the pearl industry, cyclones, Broome’s One Day War, shellfish and manifestations of aboriginal artifacts. Allow a couple of hours here to fully absorb the whole story. Children can go on their own educational adventure with a museum quiz. Those who are particularly interested in the history of pearl broome may want to visit the Japanese Cemetery where a tall column is dedicated to the memory of the Japanese pearl fishermen who died in the cyclone in 1908.

Sit back in a chaise lounge under the stars and enjoy a movie in the oldest outdoor movie theater in action. Sun Pictures, in the heart of Broome’s Chinatown , makes several movies at night and also has an interesting history. Cinema was born in the early 1900s as a store owned by the Yamasaki family. The family happened to love movies, so they turned part of their store into a small Japanese theater. In 1913, Crane bought the building and turned the store into a movie theater. Sun Pictures welcomed its first official audience in 1916 with a silent film and has been making movies ever since, despite frequent tidal flows over the years. Today, the movie theater is renamed Heritage, and the tax collection diminishes the tides. Before the movie, movie buffs can show up at a small museum and view memorabilia in the theater. Broome was once the pearl capital of the world, and visitors could learn how local pearl crops appreciated South Sea pearls on a tour. Willie Bay as well as Cygnet Bay Farms both offer popular tours that showcase the entire process, from the initial sowing of oysters to harvesting and sorting. Tours go through land, sea and air, depending on the tour operator and each traveler’s time constraints. Of course, a visit would not be complete without the opportunity to purchase some of these South Sea beauties as a souvenir. In downtown Broome, visitors can pick up some beautiful pearl jewelry at the many stores in Chinatown.