It is known that there are two Naples, the above-ground and the underground, which are naturally radically different from each other, but both are of great interest. How did this happen? The soft tufaceous soils allowed the extraction of stone for the construction of buildings. Thus were born the caves that formed a veritable underground city. Some of them date from the ancient Greek period, others came later. Today we will go down to the Gallery of Bourbons, which was discovered relatively recently, but it is striking in its grandiose scope, the interweaving of historical events and underground beauty.

At the end of the 19th century Naples was the capital of the Kingdom of the Two Sicilies, under the rule of the Bourbon dynasty. In 1853, Ferdinand II of Bourbon decided to connect via underground corridor the two strategic points of the city – the Militia (now Via D. Morelli) and the Royal Palace (Piazza Plebiscito). He commissioned the architect Errico Alvino to work on the grandiose project. The idea was to have royal carriages pulled by horses along the underground avenue, and to have gas illumination to illuminate the darkened streets, along which numerous boutiques and shops would open. All the work was done by hand, with hoes, crowbars and hammers, by the light of torches and candles. But Errico Alvino encountered several problems in the process. First, there were two cisterns in the way of the gallery, which at the time were functioning, supplying water to Naples. But the architect dealt with this obstacle by building two underground bridges. It was worse at the end of the tunnel when the tufa ended and sandy soils began, due to which, the size of the corridor had to be greatly reduced and it was not possible to make an exit to the Plebesito Square, as originally planned. Nevertheless, the wide part of the gallery is striking in its scope – it rises 12 meters in height and widens by 12 meters. Vaulted arches support the ceiling.

During the Second World War, the dungeons were transformed into bomb shelters where Neapolitans hid from shells flying from the sky. Later, many personal objects and writings on the walls were found, left by people on the brink of despair.

In the 1950s, numerous side corridors were dug from the Bourbon Gallery, which is 430 meters long. As a rule, they were laid illegally, so they have a rather chaotic outline.

For many years the dungeons of Naples arrived in oblivion, and it was not until 2005 that the Bourbon Gallery was accidentally discovered. At the time, the corridors were full of trash and waste that had been dumped here illegally. A group of volunteers cleaned up the main part of the dungeon, tidying up the historic site, and in 2010 the Bourbon Gallery opened to the public. There are now several itineraries during which you can immerse yourself in the underground Naples of different eras.

Those entering the gallery are greeted by a shard of a giant statue that celebrates the perfection of the body typical of the Fascist era. This creation is dedicated to Aurelio Padovani. The sculpture was designed by Marcello Canino and executed by Carlo de Veroli, and in 1934 it was installed on the piazza Santa Maria Degli Angeli in Pizzofalcone. After the war, the monument was destroyed and found its last resting place underground; it was found in 2001.

The corridors of the Bourbon Gallery are filled with old cars, all piled here and witnessing the various vices of their time. Cars with enlarged trunks were used to smuggle cigarettes. An entire fleet of Vespa motorcycles died here because they had “left-handed” motors that could only last a hundred kilometers.

Side corridors lead to numerous cisterns, of which the most picturesque is exactly under the palazzo Serra di Cassano (Pizzofalcone quarter).

The underground tuff pool was filled with water via an aqueduct. Naturally, the life-giving water was not clean and sterile and the cisterns had to be cleaned of dirt. This is how the profession of “pozzaro” (pozzo, from pozzo – well) came about. The pozzaro would go down steep steps underground and clean the cisterns. This work was dangerous and poorly paid, so pozzaro would use trickery – blocking the water or throwing animal corpses into the cistern, and he could sneak into a house using the wells and steal the owners’ money or belongings. Thus the legend of Monashello, the keeper of the wells, was born in Naples. And the Neapolitans still have the saying that the lost thing was taken by Monaschello.

The Gallery of the Bourbons came into the picture in one of the episodes of the cult film “Bastards of Pizzofalcone”. The underground corridors were used by criminal elements escaping from justice.

There are four routes in the Bourbon Gallery:

– Standard , during which you can explore the gallery, cisterns and rooms that were used as bomb shelters.

– An adventurous one that involves a more extreme walk along steep corridors and a descent into an ancient cistern.

– A caving course for the more advanced visitor.

– Via de la Memoria, dedicated to Naples, which suffered from the bombings of World War II.

For the first visit you can choose the standard route that is most in demand.

The Bourbon Gallery in Naples 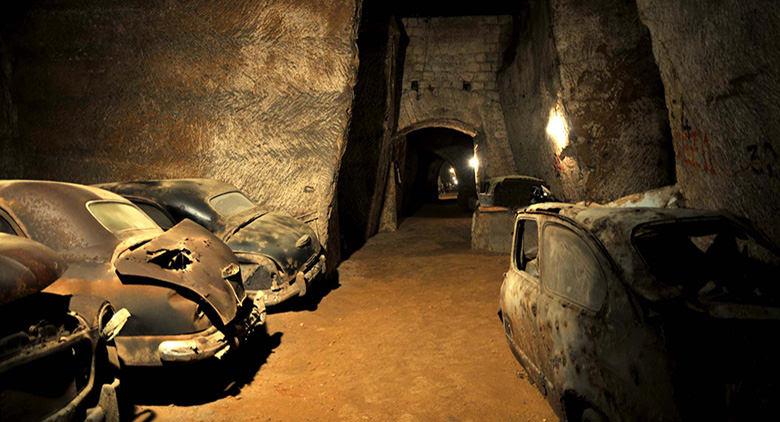 The Bourbon Tunnel is already renamed Bourbon Gallery takes its name from King Ferbon II of Bourbon, who in 1853 began its realization with the objective of creating a secret passage, buried between the Royal Palace and Piazza Vittoria close to the sea and to the barracks, to allow a safe and quick escape to the King in case of danger, given the risks that occurred during the revolutionary movements of 1848.

The work lasted three years and was done entirely by hand with picks, hammers and wedges, and was lit only by torches and candles. 25 In May 1855 the inauguration of the Bourbon Tunnel took place with the passage of Ferdinand II of Bourbon, but then it remained open to the public only for days 3. The gallery closed permanently for economic reasons and because of the decline of the Bourbons with the advent of Italian unification.

The Bourbon Gallery was again useful during the second world war between 1939 and 1945, when its tunnel and the neighboring cisterns were used as a civilian military shelter , Thanks to this secret route they found refuge among the Neapolitan 5.000 and 10.000, many of whom had lost their homes during the bombing that hit Naples by both Allies and Germans.

It was not until 2005 that the gallery was revised by geologists, who began digging into the underground passage, gradually finding different rooms and succeeding in 2010 to reopen the structure to the public .

Today, the Bourbon Gallery is one of the most interesting and memorable tourist attractions in the city of Naples, where visitors can choose between Routes 4 .

You can stroll through the gallery, immersing yourself in an extraordinary journey through the “lower” Naples. The visit includes cavities that were part of the aqueduct and those used during the war as a military shelter.

We will visit a gallery aboard a raft to walk through an old speed streetcar line tunnel built in the late ’80s. Here you can also visit ancient cisterns from the 500s and 600s.

This is the longest and most fascinating route. Visitors are equipped with a helmet with a front light, overalls and safety harness to explore the tunnels of the ancient underground aqueduct.

An incredible and nostalgic journey to Naples, ravaged by war bombing, but which still seems alive thanks to the finds, relics and found objects of those who lived in the underground ways to protect their lives.

Information about the Bourbon Gallery in Naples

Reservations are not required if the group does not exceed 20

Entrances: – Vico del Grottone, No. 4 (about 100 m from Piazza Plebiscito) – Via Morelli, No. 40 (pedestrian entrance to the Morelli parking lot)

Entrance: only from the pedestrian access to the parking lot of Morelli, via Via D. Morelli

How to get there Enter Vico del Grotto (Piazza del Plebiscito)

By cable car Get off at the Piazzetta Duca d’Aosta stop.

by Funicolare di Chiaia, along Via dei Mille (7 minutes), as far as Piazza dei Martiri and then on to Piazza Vittoria (other 5 minutes)