Although the island, which was formerly under Spanish rule, was a small fishing town in the 1970s, it gradually became an incredibly popular destination with the arrival of Europeans. Over time, Boracay has become the tourist center of the Philippines and opens its doors to visitors from all over the world every year. The island, which is the pearl of Asia with its unexplored nature, white beaches and turquoise sea, has a population of about 30,000 people.

Offering the most suitable vacation opportunities in the world, Boracay fascinates tourists in terms of both economic and cultural life. The national currency is the Philippine peso. Water sports are very developed here: one can go surfing, sailing, scuba diving and snorkeling. You can also take part in many activities, such as beach volleyball and Frisbee. While cruising around the island with traditional fishing boats, you can watch a unique sunset, watching the underwater world as if it were an aquarium. 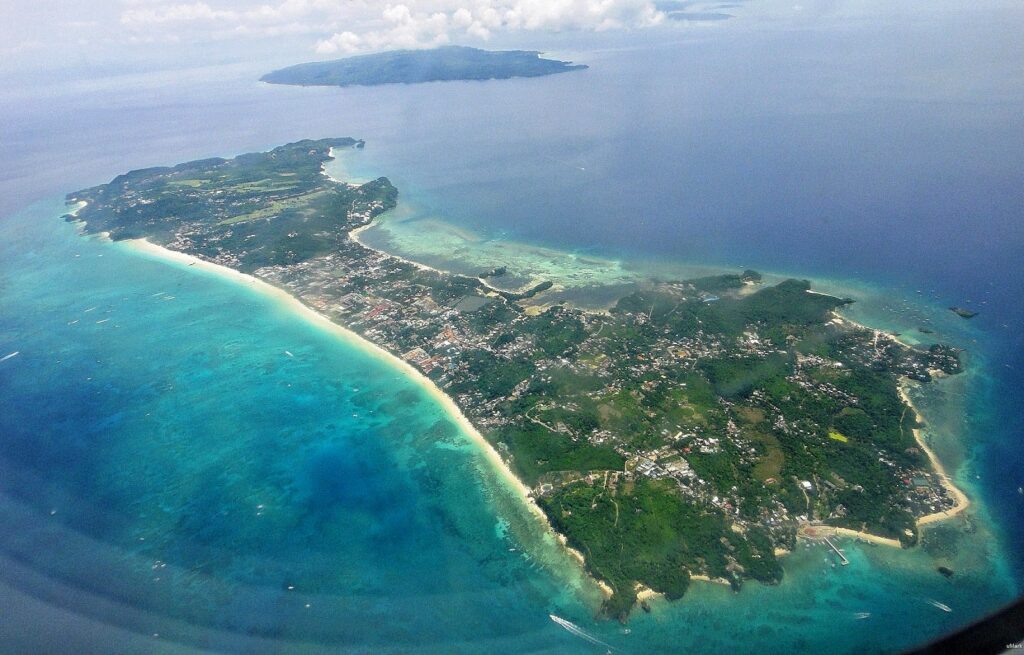 Although the alternatives for entertainment on the island may seem few, guests will be enchanted by the sites and unique structure of the island:

1. White Beach, one of the three best beaches in the world, is one of the favorite places of tourists on the island.

You can swim in the sea for free at any point of the 4 km long beach. You can eat at affordable prices in cafes and restaurants and watch the magnificent view and sunset. 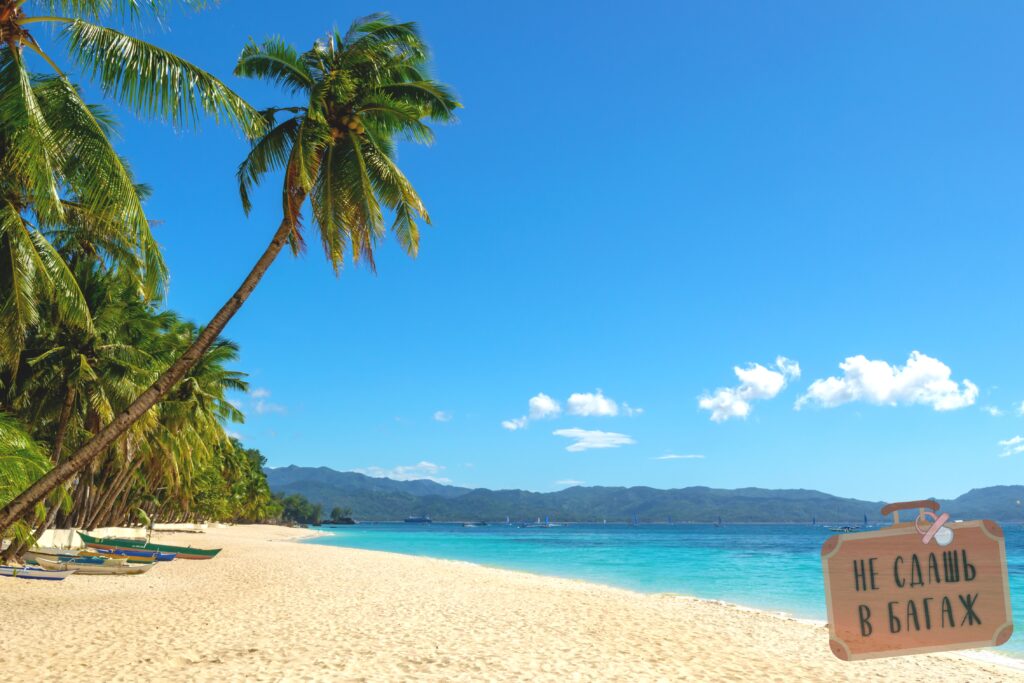 The view of Boracay White beach with coconut palm trees, boats and no people Boracay Island is a paradise 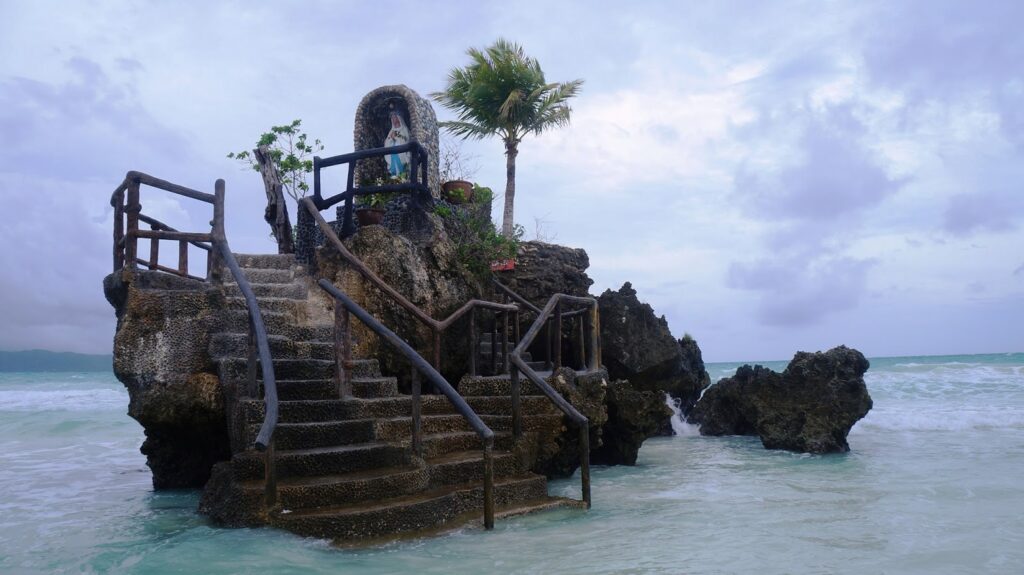 The Bat Cave will be the perfect trip for adrenaline lovers. If someone likes adventure, it is worth trying to explore this cave. It is better to go to this cave in the west of the island with excursions. The cave, where the little fruit bats live, attracts many tourists. Since the cave is dark, you need a flashlight to see the bats. Guided tours are available to walk through the cave. To walk comfortably through the forest nearby, you can buy clothes and shoes sold by locals. Entrance fee: 50 pesos. Excursion tour: 2500 pesos. 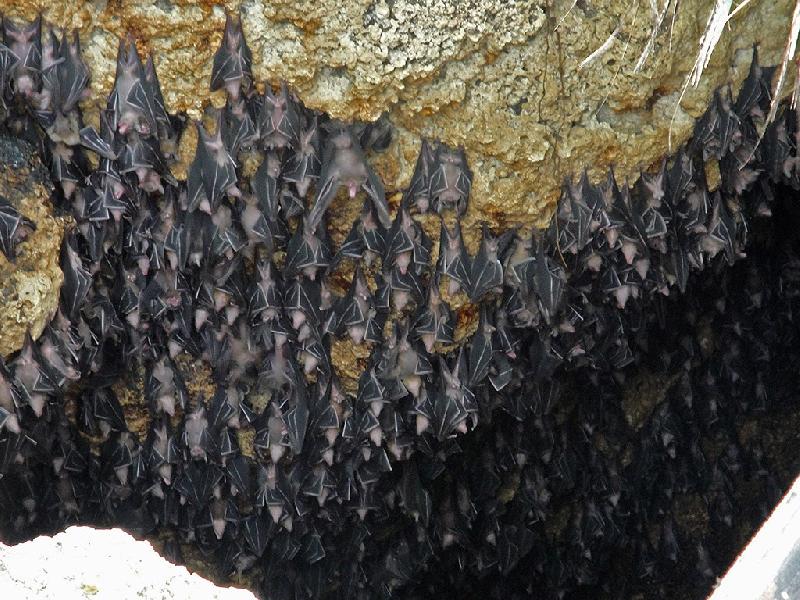 It is located to the east of Boracay. Although the sand on this side of the island is not as soft and fine, there is a pleasant atmosphere and the place is a center for water sports. From November to April the beach is a favorite spot for kiting and windsurfing. Several international windsurfing and kitesurfing competitions are held here every year. In summer, when the wind changes direction, there are also other water sports such as “banana boat”, water skiing, “flying fish” and parasailing. The beach is protected by coastal reefs. Because it is less developed, hotels in Boracay tend to be smaller and quieter than White Beach. In addition, Bulabog Beach has received the title of “the number one harbor in Asia. 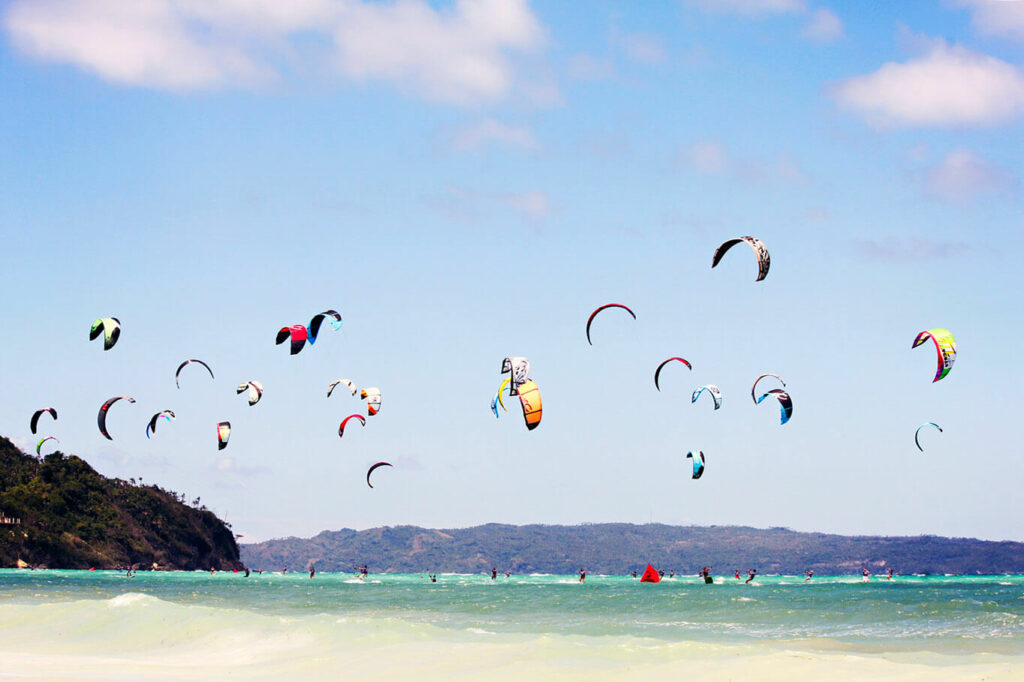 Besides tiring but exciting water sports, nature walks and magnificent sunsets, Boracay Island offers tourists a very pleasant activity. Riding trained horses, it is worth taking a short tour around the island or exploring its forests. You can easily do your tour with easy to handle obedient horses. What’s more, you can ride your horse safely and peacefully with instructors. In addition, children can participate in activities suitable for all ages. You can live the cowboy dream by riding a horse backwards. While riding, you can go to the top of Boracay Island and have the opportunity to observe the unique view of the island from the top. 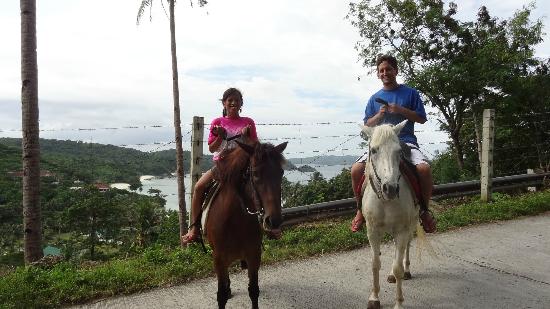 The average temperature of Boracay Island, which is characterized by a tropical climate, ranges from 25 to 35 degrees. The island, which is hot all year round, is dominated by three seasons. These include the June-October (rainy), November-March (dry and fresh) and March-May (hot) seasons. The months when there are a lot of tourists and the humidity and temperature are quite tolerable are January-February-March. 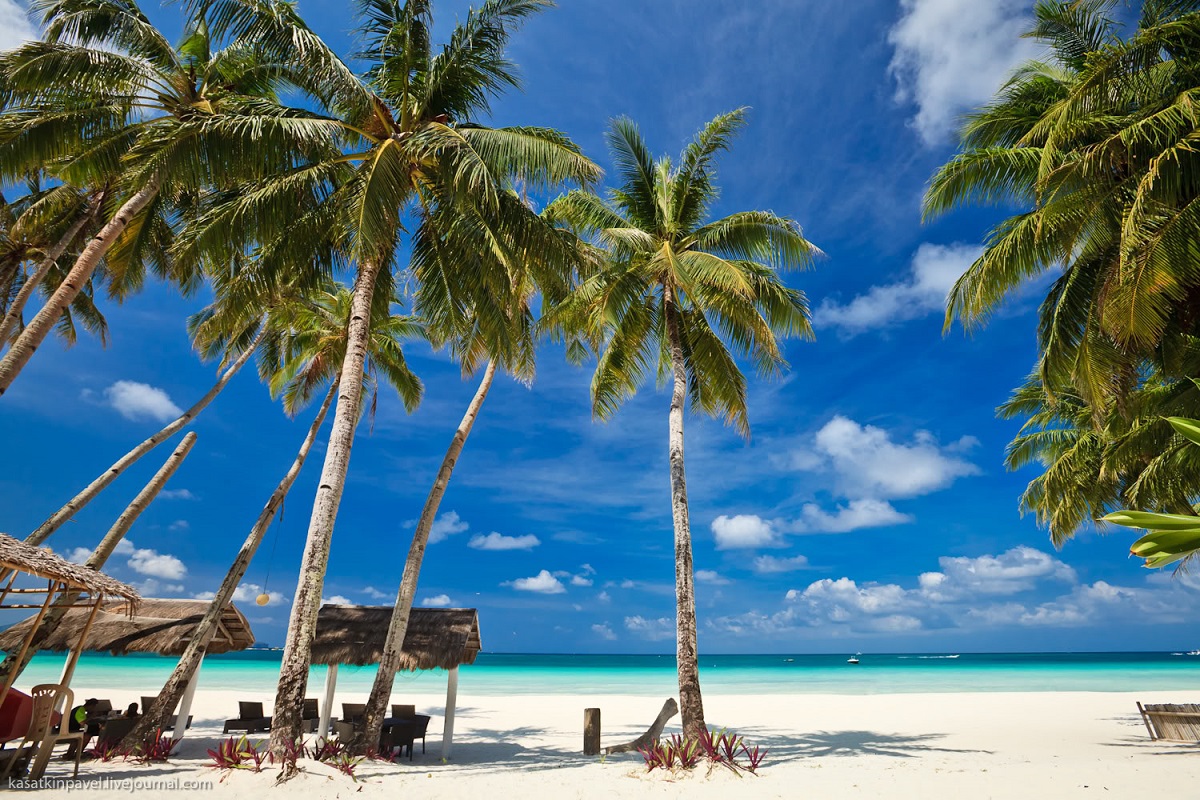 Boracay is a small tropical island in the Philippines. It is 315 kilometers from the capital of the Philippines – Manila, and only two kilometers to the nearest large island of Panay, more precisely to its northwestern tip.

The island of Boracay with its cleanest and most beautiful beaches has received many awards from various travel publications from around the world.

Largely because of its pristine white-sand beaches, Boracay is known as one of the best resorts in the entire world. So in 2012 it was awarded as the best island in the world, a title awarded by the prestigious international magazine “Travel + Leisure”. 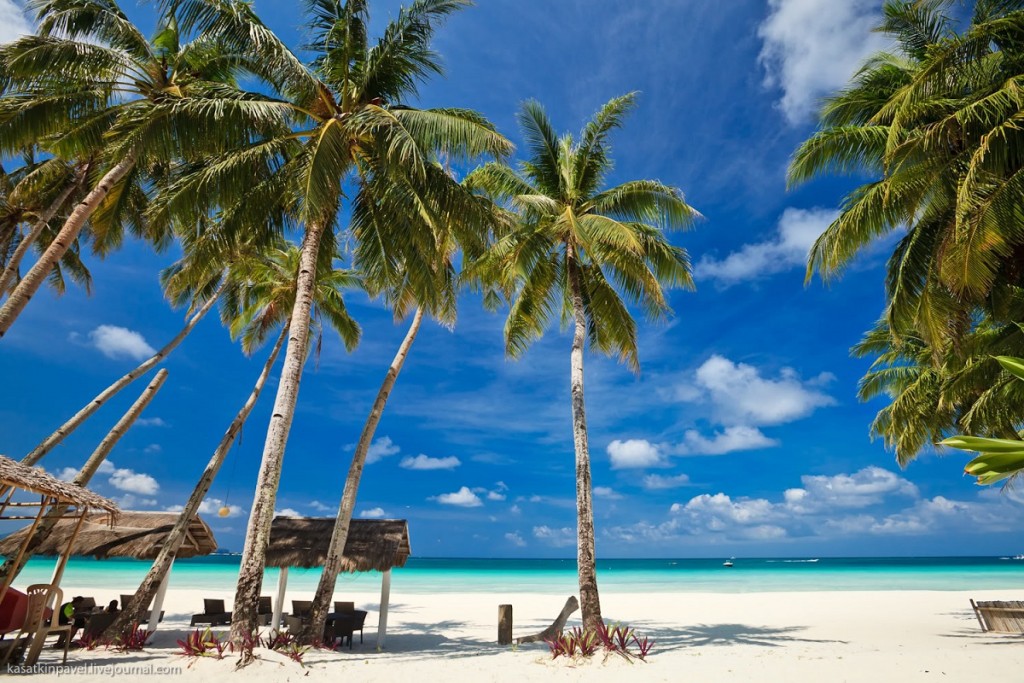 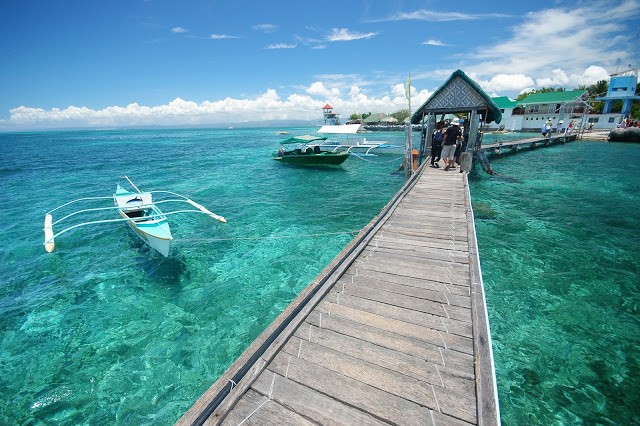 Originally, before the arrival of Europeans, the island was inhabited by the Ati tribe, whose numbers did not exceed 100 people, the islanders lived by collecting rice and raising livestock, mostly goats. Now, in tribute to the former inhabitants. the island hosts an annual festival with colorful outfits, which attracts people from all over the Philippines.

After colonization, Boracay became part of the province of Aklan, and for a long time was dependent on Europeans who saw no potential in this small island. Only after the Philippines became an independent state in 1956 did Boracay begin to develop into a local tourist center. So in a short period of time, by 1980 the island had evolved from a little-known wild piece of land into a popular tropical resort. The fame of the island was cemented in the 1990s, when many reputable magazines declared the beaches of Boracay the best in the world.

The origin of the name of this Philippine island is not exactly known, but there are several speculations on the subject. The most plausible are the following: “borak” is a word used by the indigenous Ati people, meaning white cotton, which is comparable in quality to the white sand of Borocay, according to researchers; also in the local dialect there are words “bora” – bubbles and “bokai” – white, which when compared probably indicates the snow-white sand of the beaches.

Boracay is on the western side of the Philippine archipelago and is separated by a small channel from the larger island of Panay, which is connected by a waterway that brings in drinking water, meat, clothes, and other necessities. On the island itself there are three barangays, such small Philippine administrative units, similar to our Russian neighborhoods, Manok Manok, Balabag and Yapak. All of them, like the island belongs to the province of Aklan, which also owns the northwestern part of Panay Island.

The island of Boracay is quite small, its length in the longest part is a little less than 7 kilometers. And the width varies between 1 and 2 kilometers. In shape, the island resembles a dog bone. Only very large, with an area of 10.32 square kilometers.

On the south side of the island is the beach Kagbai with a small port of the same name, which serves as the main entry and exit point from the island of Boracay. The port is very convenient because it is located right in front of Panay island, they are separated by a small strait with a width of about 2 kilometers, through which the ships are constantly moving, and, accordingly, any problems with communication are completely absent.

Boracay is a small tropical island in the Philippines.

Boracay has several beaches, among which the most popular are: White Beach and Bulabog Beach. Both are located on opposite sides of the island, White on the west side and Bulabog on the east. Among the tourists, the most popular is the White beach, it is a large – about 4 kilometers long and has the greatest number of different institutions, whose activities are closely linked with the tourist destination. These are restaurants, hotels, clubs, pubs and others. The second most popular beach, after White Beach, is Bulabog. It is smaller and has a much smaller number of tourist complexes. But this beach is interesting for lovers of outdoor activities, as in this part of the island the winds are the strongest and the waves are big.

Since 1900, thanks to the efforts of the locals, Boracay has grown coconuts, bananas, citrus fruits, and other fruit-bearing trees and shrubs. It is also forbidden to cut down trees on the island, the administration of the region is trying to preserve the nature of the region, so the forests on the island cover an area of more than 400 hectares. And the agricultural land has an area of about 630 hectares.

Boracay has two distinct seasons: Amihan and Habagat. In the local dialect, Amihan means a cool northeasterly wind and Habagat means a southwesterly monsoon. The former is characterized by moderate temperatures, with a small amplitude of fluctuations. Weak winds and little precipitation. The second is characterized by high temperatures with greater amplitude, high humidity, strong southwest winds, and frequent showers. Accordingly, Amihan is the most favorable season to visit the island. It is usually established in the summer and autumn, sometimes its duration lasts no more than a week, and sometimes a few months. The rest of the year is dominated by Habagat.

The average daytime temperature throughout the year is +26.8 degrees Celsius, with small variations even in Habagat.

Due to favorable weather conditions, the main tourist peak is in Amihan, which is the summer and autumn period. The wind from the east dominates significantly during this period, so that the white beach, situated on the west side of Boracay, is almost completely sheltered from the winds and the water is smooth and glassy on its shores.

Boracay Island is home to a golf club, more than 350 resort establishments, many restaurants, bars, pubs and nightclubs. Boracay may be a relatively small island, but it offers a huge range of services, from simply swimming in pristine blue water and lying on a white soft beach, to golfing, going to bars and nightclubs.

Boracay is home to a variety of sporting events. Boat racing competitions are held on the island every year. Competitions on windsurfing and kitesurfing take place. And also the opening of a large-scale Asian beach competition.

In general, the landscape of the island is fairly flat, the highest point – 100 meters, the so-called mountain Laho. Despite the low altitude, from the top of this mountain there is a beautiful panoramic view of the surrounding area of Boracay. Due to the small size of the island, there is no such relatively large transport as cars, let alone anything more imposing. Locals get around on small bikes, which are also available for rent to tourists.

Among the main attractions on the island are the Talipapa Market, the dead forest, and the bat cave.

Talipapa market is known for a huge selection of souvenirs, mostly handmade by the locals. These include figurines, accessories, and household items, clothing, and much more.

Another attraction is the dead forest, a small grove, flooded for several years by destructive sea water, so all the greenery on the trees died and only intimidating branchy trunks are left.

And the bat cave, as the name implies, is a small cave with a huge cluster of bats.