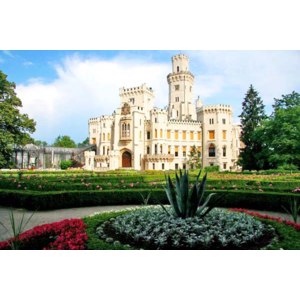 There are many things to love about the Czech Republic, but the first reason to love it in this long list would be the myriad of historical monuments and sights per square meter. It would seem that such a small country in terms of size, but what a high concentration of historical sites.

This summer I was lucky enough to visit three major Czech cities. During a trip to Cesky Krumlov we could not miss such a sight as the Castle of Hluboka nad Vltavou, which is located in the town of the same name. This castle is almost 800 years old!

Hluboka Castle is one of the most visited places in the Czech Republic.

We drove from Prague to Cesky Krumlov, and on the way we stopped for a tour of Hluboka. It took us a little over two hours to get there.

You can also get by bus for 5 euros, but it takes 3 hours or by train (more expensive, but faster). Buses don’t go all the time and trains even less, so keep that in mind when you’re going to visit this place. It’s better to choose the time before lunch, visiting Hluboka first, and then go to Cesky Krumlov, but not vice versa.

We parked our car near the castle at the guarded parking lot (the service is paid).

Cesky Krumlov and Hluboka nad Vltavou are close, thirty kilometers from each other. If you go from the capital, the distance is more than 150 km. Hluboka is located to the south and slightly west of Prague. 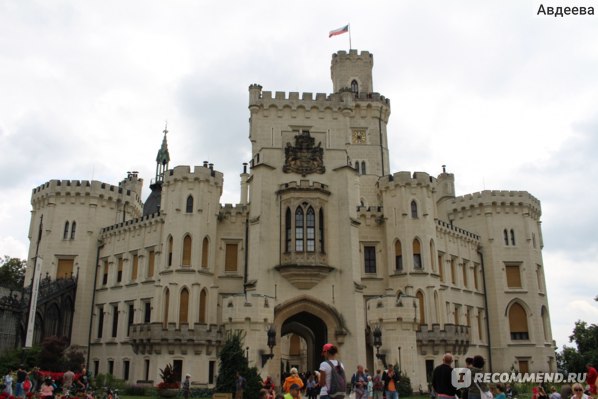 A ticket for two adults costs 14 euros. For children the prices are lower, and up to six years old are free. You can also take a family ticket, it will cost 33 euros.

The castle, as well as the ticket office, is open from 9 am to 5 pm with a break for lunch. The ticket price includes a tour of the rooms of the castle, but you can enter the grounds for free, for example, to walk around the park.

In the photo below you can see the archway through which you can get to the ticket office, and on the left hand side there will be a pay toilet. There are also benches where you can rest after the tour. 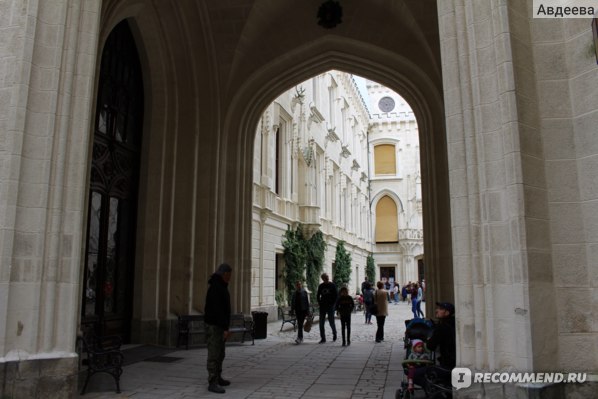 At the ticket office you will get a ticket like this. There was no Russian speaking guide or audio guide. We paid for a tour with a Czech guide. The tour group was about 20 people and walked the main route – the Parade halls.

Russian-speaking tourists were given printed sheets with basic information about the history of the castle. In my copy some facts were crossed out with a blue pen, and the copy of my husband was uncorrected. 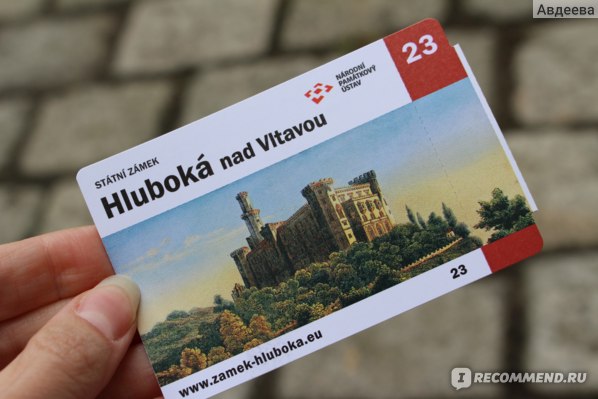 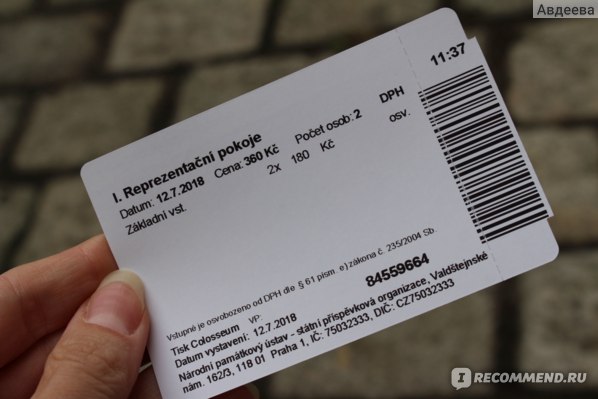 4. history of the castle

You can read about the history of the castle Hluboka nad Vltavou on the same Wikipedia, in addition to which there are many other sites with interesting information. 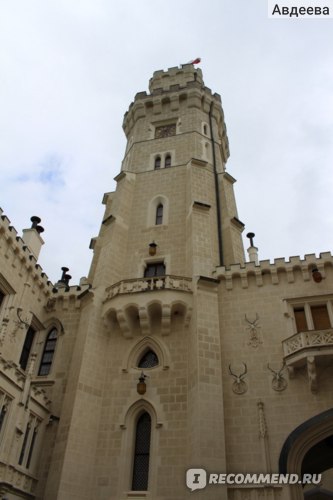 5 Excursion through the territory of the castle

Unfortunately, as in many other castles shooting is prohibited. This is monitored tirelessly by security guards and tour guides.

We bought tickets on the first floor at the ticket office, before the tour we had another 20 minutes of time, which we spent outside the castle, in the park. 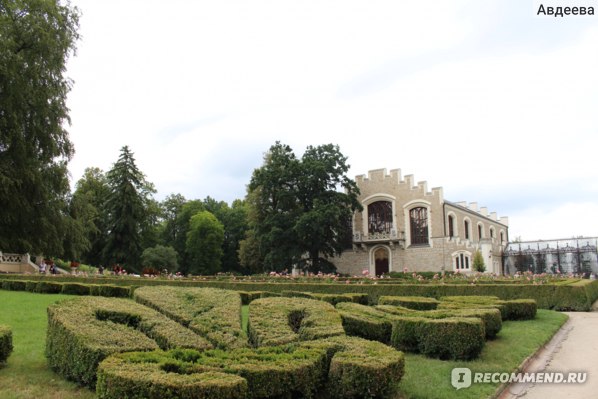 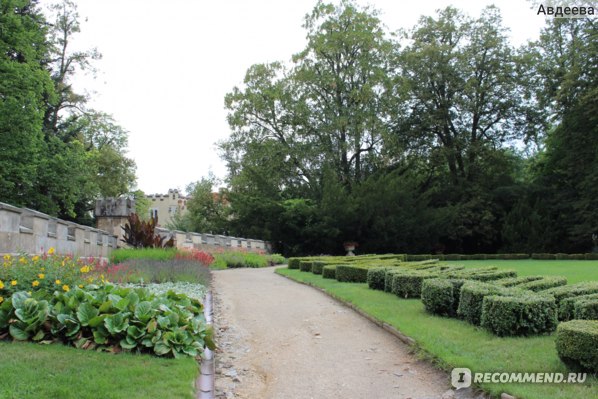 On the territory of the castle are planted rare species of plants. In addition, there are trees, the age of which counts several hundred years. 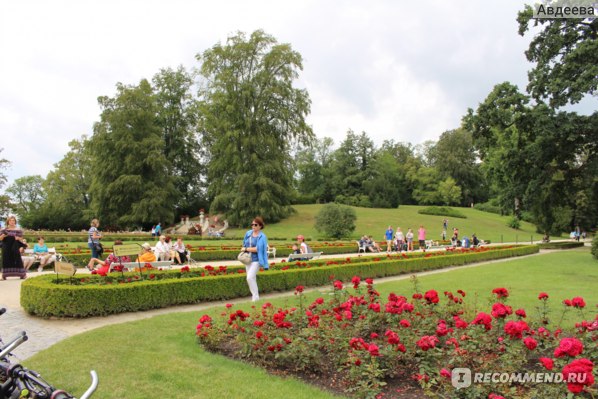 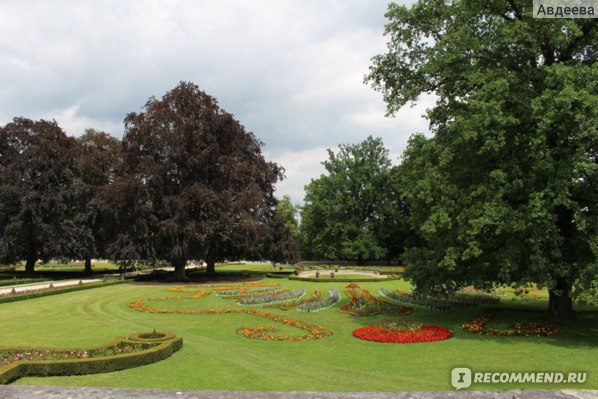 The whole area around the castle is beautifully landscaped: flowers, neatly trimmed lawn, lots of trees, clean benches for tourists.

Near the castle there is a fountain with a swimming pool, to which there are two stairs on the right and left.

READ
What to see in France in 7 days

Immediately near the castle there is a greenhouse, where there are numerous souvenir shops. Cafes and restaurants on the territory we did not find. 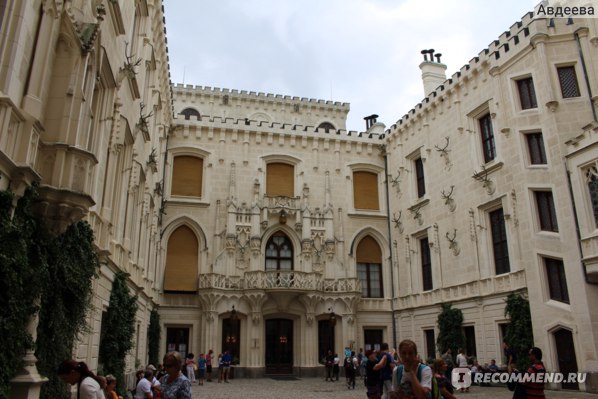 6. excursion through the halls of the castle.

When the group gathered, everyone except the Czechs were given the prints with translation of the tour. The tour itself was conducted in the Czech language. The guide not only read the tour, but he also opened/closed the doors and made sure that nobody took photos.

The tour started in the hall, located on the first floor. Numerous tapestries, hunting trophies, vases, and a carved staircase immediately caught my eye.

Our guide didn’t particularly care if everyone had time to see the hall. As soon as he gave out his memorized tirade, he would close the hall and open a new one, leading the group.

The guide was talking so fast that we barely had time to look at the insides of each hall. 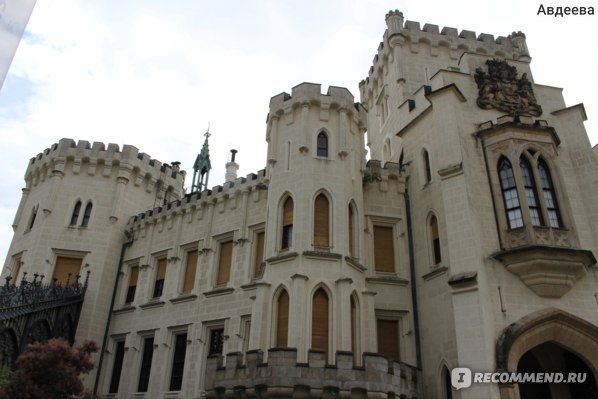 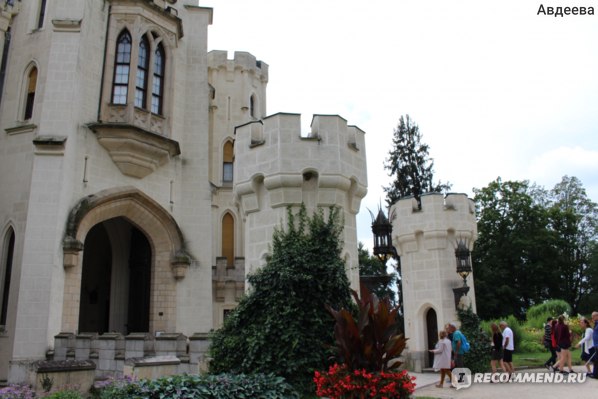 Then, leaving the hall and going up to the second floor (the stairs led to two different directions, but only the left was open for tourists), we went to the bedchamber of the owner of the castle – Princess Eleonora. What I remember from this hall was the floor, which was lined with parquet of different types of wood. Next was the reception hall, where a large painting of the princess was hanging.

After that we went to the front room (the morning salon), where there were portraits of all the owners of the castle (and there were 26 of them!). 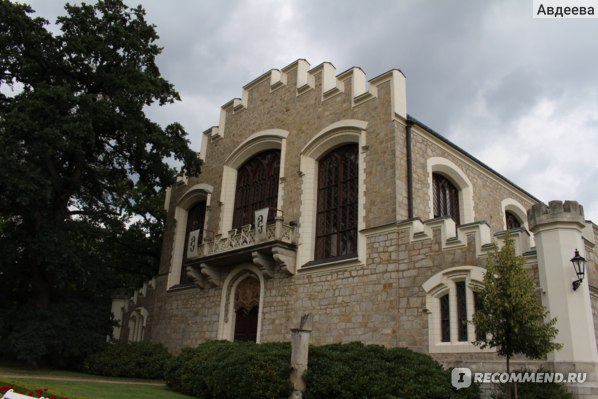 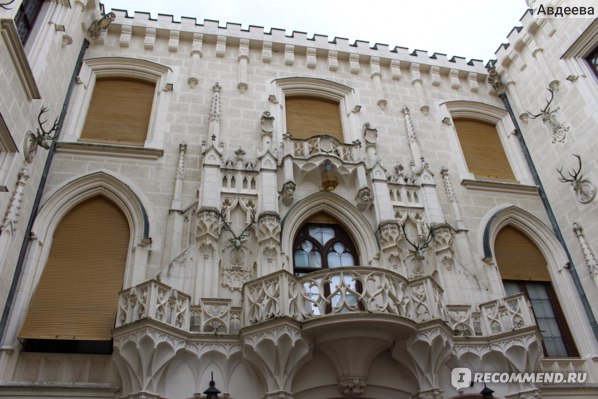 The last room we visited, and where we met up with another tour group, was the smoking room, which houses a multi-ton marble fireplace of unreal beauty! Unlike the stuffing of many of the other rooms, the fireplace has been preserved from a longer time, perhaps even from the beginning of the castle’s construction. If I’m not mistaken, this same room also had a huge library. On all sides of the room were wooden cabinets filled with ancient manuscripts and books, some books were open on stands, you could examine them in great detail – the main thing was not to touch them with your hands.

READ
Journey to the Island of Brac, Croatia

In this library, according to the guide, more than ten thousand volumes on history, philosophy, fiction, etc. In fact, I imagined about that much, how many books were in the cabinets. And the cabinets were carved, too, as were the ceiling and the walls-all in the same style. 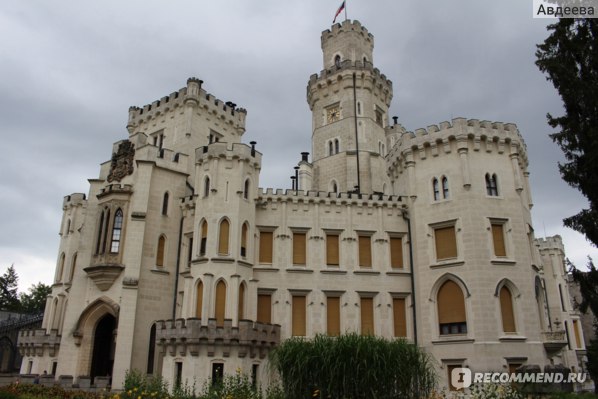 At the exit we saw a collection of weapons and armor, but the guide did not tell us much and we passed these rooms silently. I have seen windows, which either painted ornaments, or whether it is also a carving.

All the halls, for me, were gloomy, with little daylight and artificial light, but a lot of wooden carvings.

This castle is the only one I have visited that is much more beautiful from the outside than from the inside. It would seem, and kept a lot of historical artifacts, but somehow stingy looked, not rich (in contrast to the castle Moritzburg in Germany, for example).

Another minus was a hastily conducted tour, we were not given a basic view of the hall, and cramped and a large group did not contribute to this. 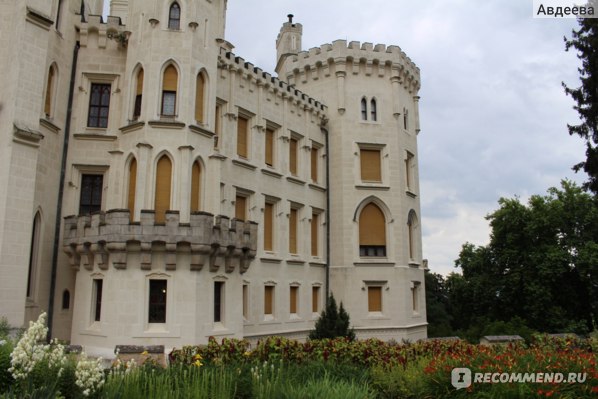 The castle has about 150 rooms, but we visited about 10 of them. I remember this castle the least, there were no significant or valuable things that stuck in my memory. I have not been surprised by tapestries since my visit to the Ukrainian castle in Zhovkva.

The only thing really memorable, and I regret that we were not lucky enough to see in more detail, were the ancient manuscripts and the library on the second floor.

Overall, Hluboka Castle is certainly worth a visit, especially to see the beauty within the castle grounds. But the work of the guide I strongly disliked! The guide was rushing the group, literally ran from room to room, while making sure no one was taking pictures.

I got the impression that the man memorized Wikipedia, I did not hear and did not see a single interesting fact. The whole tour took half an hour, from which I did not get any useful information.

READ
The island of Rhodes - the pearl of Greece 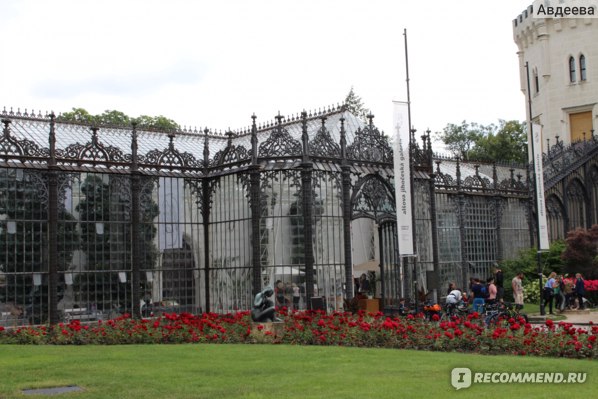 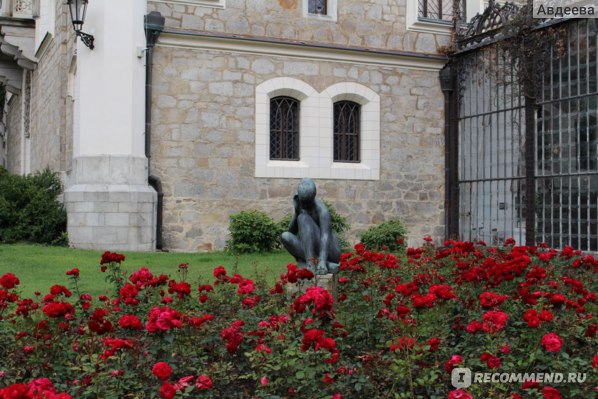 On the way back we came across the church of Jan Nepomutsky of the 19th century: 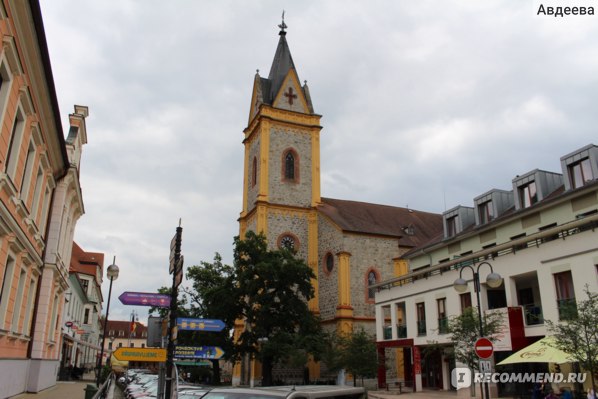 After leaving the castle, you get to the greenhouse, where there are many souvenir shops. There you can buy handmade costume jewelry, and not “made in China”.

We only bought a magnet: 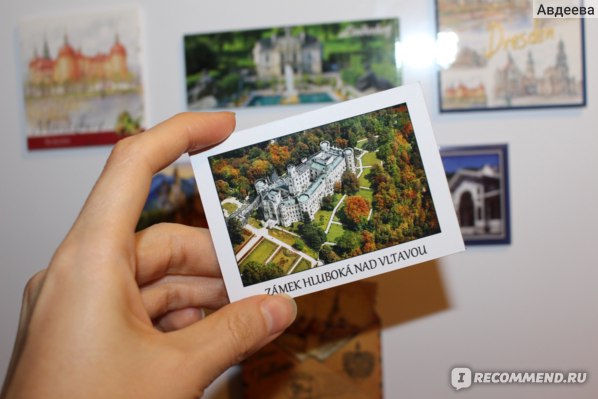 If I am lucky enough to visit the Czech Republic again, I will definitely not visit Hluboka Castle. A repeat visit is definitely not, but I still recommend a visit to those who have not been.

After the tour we visited Cesky Krumlov, I was thrilled with this city! Details in the next review