The Blue Grotto of Capri, one of the main must-visit destinations in Italy. The symbol of the most exclusive island of Italy in the magnificent Gulf of Naples, the Blue Grotto is a magical place, covered with legends, a magical sea cave of incredible beauty in which the rays of light are reflected with a dizzying sheen of blue. When in Italy on the island of Capri (Isola Capri) you can get to the Blue Grotto by bus from Anacapri from Piazza della Pace or by boat from the port of Marina Grande. The trip to the Blue Grotto by foot can be equally fascinating, a 3.5 km walk separating the center of Anacapri from the cave: just go down Via Pagliaro and turn in Via Grotta Azzurra. To get to the grotto itself, however, is possible only from the sea by small boats that take tourists inside the cave.

Features of the Blue Grotto The Blue Grotto (Grotta Azzurra) in the south of Italy is a natural cave about 60 m long and 25 m wide. Its entrance is very narrow, 2 m wide and 1 m high, allowing only a small paddle boat, with a maximum of 4 people on board, to enter it.

The unusual bright blue glow of the cave is due to the fact that the sunlight enters through an underwater window located just below the small entrance. The water absorbs the red tone of light and allows only blue light to pass through. The silvery reflection of objects submerged in water is created by air bubbles, which, by adhering to their outer surface, have a refractive index of light different from water.

History and Legends of the Blue Grotto According to popular belief, the Blue Grotto was home to cursed spirits and demons that would not allow ordinary people to enter it . What led to the birth of this legend is unknown. In 1826, a young German painter, August Kopisch, who was traveling the world with his artist friend Ernst Fries, arrived in Capri. The guys stayed at the home of notary Giuseppe Pagano, who liked to host intellectual foreigners. He was probably the first to tell them the legend of the secret cave. It would be wrong to say that two boys “discovered” the Blue Grotto: the local fishermen knew very well where it was, but none of them dared to approach it.

The boys, driven by a passion for adventure, decided to defy danger, and one day that summer in 1826 they entered the grotto. They were so stunned before its beauty that Kopisch later described in a book all that he saw in the cave. The illustrations of a painter friend, Ernst Friesz, added color to Kopisz’s descriptions and gradually the cave began to attract more and more people.

how much does it cost

Tickets cost 14 euros per person, but there are special offers when the Blue Grotto tour is part of a tour of the entire island of Capri.

The cave can only be entered under favorable weather conditions, i.e., when there is little wind and the sea is calm. When the weather is good, the grotto is open from 9 a.m. to 5 p.m. from March to November.

You can also rent a personal tour with a skipper (on average 150-200 euros for a couple of hours), but in any case you have to wait, because the entrance to the cave is limited. The best time of day to visit is noon. It is at this time the reflection of light inside the cave is particularly rich and unique emotions are guaranteed. Unfortunately you can stay inside for no more than 5 minutes.

swim in the grotto

Swimming in the cave of the Blue Grotto is prohibited, but some still try, especially after 5 pm. You have to be very careful because the entrance is really narrow and there are enough strong tidal waves to hurt yourself on the rocks. 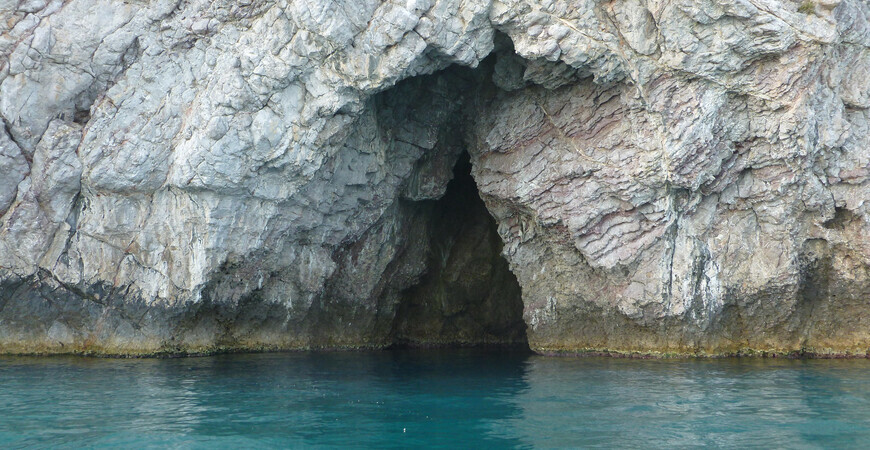 The Blue Grotto (or the Azure Grotto, Grotta Azzurra) is the main natural attraction of the popular Italian island of Capri, known since Roman times. It is located in the northern part of the seaside resort, near the town of Anacapri, in the province of Naples.

The grotto is a coastal cave of natural origin, partially submerged in the waters of the Tyrrhenian Sea. Its uniqueness lies in its special lighting. On sunny days, the water and walls in the grotto appear in azure color, hence the name. It has only one entrance – from the sea, so get to the grotto can only be by boat.

You can get into it through a small arch in the rock. The entrance is rather low, not more than 1.3 m, so you cannot access it at high tide or in stormy weather.

The stone vault rises 15 m above the sea, but its length is about 56 m and width is 30 m. The cave is divided into three branches, which communicate with each other. In one of the branches (in the “Hall of Names”) visitors even leave signs with their names. The bottom of the grotto is sandy.

Amazing neon-blue color of water inside the grotto is achieved due to the reflection of sunlight seeping through the underwater hole. The light passing through the water filter loses the red part of the spectrum, retaining only the blue. Objects immersed in the sea, due to air bubbles, which have a different index of refraction, shimmer with a silvery shine. This is the spectacle that attracts many tourists vacationing in Capri.

During the reign of the second Roman emperor of the Julius-Claudian dynasty, Tiberius, the cave served as a sanctuary for the water nymphs (nympheum). Roman statues were found at the bottom of the grotto during the exploration of the grotto.

According to legend, the cave was connected by a secret passage to one of the imperial residences, Villa di Gradola, located nearby. But even if this path did exist, it would be unlikely to have survived by now.

For centuries, the Blue Grotto was neglected, a place considered evil, full of evil spirits. No one visited it, they were wary. This went on until the first half of the 19th century, when the beauty of the place was praised by the poet and artist August Kopisch.

After that, Grotta Azzurra became the de facto emblem of Capri. But it only became a luxury resort in the mid-twentieth century and today it is one of the most recognizable natural attractions of the island. Despite this, many residents even now do not descend into the cave alone.

It is only possible to enter the grotto by small boats, with a capacity of up to 4 people. The entrance itself is a low hole in the rock, in which a chain is stretched for convenience. The rowers, approaching the grotto, pull the chain and drag the boat inside. The passengers, so as not to get dirty, have to lie down on the bottom of the boat.

The tour does not last long, 5 to 10 minutes. But it’s enough to admire the unusual color of the water, and even more in combination with the Neapolitan songs of the boatmen and the magnificent acoustics. All this gives a stunning effect. The owner of the boat will warn you in advance about the best places for photo session.

The Blue Grotto is best visited during the time of maximum sunshine, from 12:00 to 14:00. But during this time there is a great risk of getting burnt, so you must take care of clothing, covering the shoulders and back. Moreover, the wait in line can sometimes be about an hour.

Bathing in the cave is prohibited. But, as the reviews show, for an additional fee to the paddler, it is possible. And after 17:30, when visiting the grotto stops, some vacationers go into the cave by sea absolutely free. This is dangerous, because the mouth of the cave is low and narrow, and in case of high waves you can easily hurt yourself on the rocks.

By the way, above the attraction, on a steep cliff bank there is a cafe. There you can take a break, admire the sea scenery and watch the jumps into the water from a huge rock.

The Blue Grotto can be visited from 9 a.m. to 5 p.m., April through October; 9 a.m. to 2 p.m., November through March. Daily, except on days with bad weather (rain, high waves, high winds).

A boat tour of the grotto costs 16 € per person, but prices may vary (e.g. some boatmen charge a separate fee for stopping in the cave itself). During high season there may be a queue of tourist boats in front of the entrance.

The price to visit the grotto is charged at the entrance. Payment can only be made in cash and preferably without change. Children under 6 years can experience the attraction for free. For EU citizens from 6 to 18 years old the entrance costs 10 €. Additionally, you have to tip the boat owners. Usually the amount is 5 – 10 € per passenger, but sometimes more.

Transfer to the cave is paid separately. The charge ranges from about 20 € for a full boat tour around the island, where you can see some more beautiful grottoes. The tour can be purchased at the pier, boats leave every half hour. Then you have to swim to the grotto on a common boat, and there you have to wait in line. But the easiest way to get here without queuing is a guided boat trip around the island of Capri, organized by the hotel owners for their guests.

The entrance to the Blue Grotto on the Google map view

You can reach the island of Capri by sea from Sorrento and Naples. The ferries from Naples take 80 minutes to reach the destination, while the boats take 60 minutes. To get to the Blue Grotto from Sorrento, it takes 25 to 30 minutes.

There are several ways to get to the cave: