The island of Bjerke (Björkö) on lake Mälaren is the place where the very first Swedish city, Birka, was founded. Its age counts more than a thousand years – tentatively it appeared here about 770, or maybe even earlier. It is known that in the period from 770 to 970 years the city of Birka was one of the largest and most important trading centers in Sweden: the trade route connecting the Viking state with the Arab Caliphate and Khazar Khaganate ended here. Today Birka is included in the UNESCO World Heritage List.

Our contemporaries learned about the sight thanks to excavations in the XX century:

Today, archaeological sites and burials of Vikings, both simple and noble, remains of an ancient fortress and the ramparts surrounding it, as well as the remains of a fortified pier are visible on the island – researchers believe that in Viking times, the current land level was 5 m lower and ships could enter directly here. The chapel of Ansgar and the cross deserve attention. 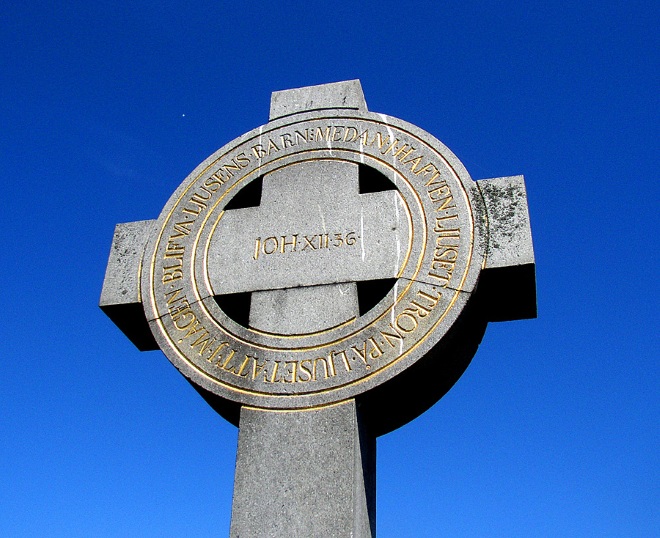 In addition, on the island there is a Viking Museum, where you can see:

Near the museum is a recreation of a Viking village. Its houses are made of upright logs, carefully fitted to each other or woven from vines and coated with clay. The roofs are thatched or peat. Inside each house you can see a hearth and a cot. Next to the village is a small cove where the Viking ships are moored. 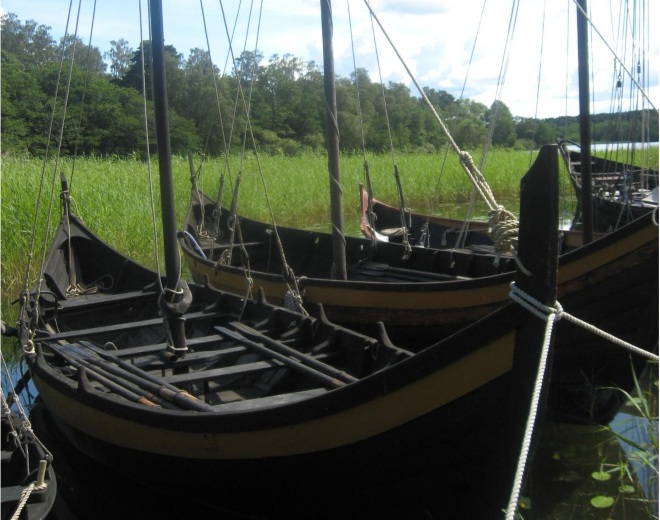 How to get to Birka?

There is a boat from Stockholm to the island of Björkö. It leaves in the morning from City Hall from May to September; there are several trips a day. Those who have already been to the island recommend seeing it on their own, rather than taking a guided tour, because the tour takes only an hour. The tour is led by an English-speaking guide dressed as a Viking. The cost of the tour to the island is about 40 euros (about $44).

Birka – a Viking village in Sweden

Sweden is home to many historical sites, from a mysterious stone monument in the southern province of Skåne to an entire Viking town, a UNESCO World Heritage Site. 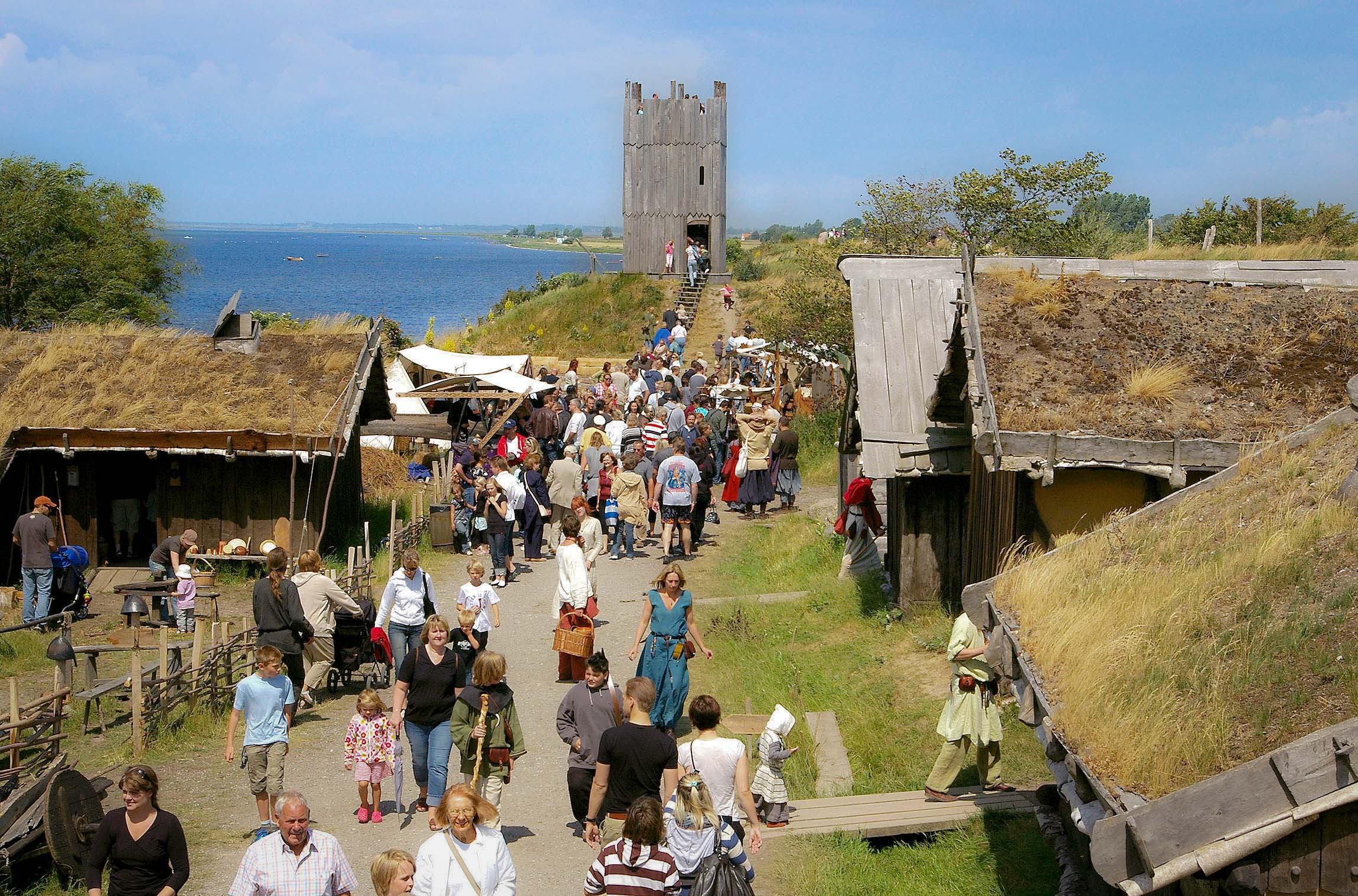 The archaeological open-air museum “Foteviken” was created on the site of the legendary battle for the Danish throne in 1134 (the territory of the modern Swedish province of Skåne belonged to Denmark until 1658). The museum is a reconstructed village of the early XII century. Museum staff and volunteers recreate the life of peaceful Vikings, offering visitors to try on homespun shirts, learn how to work the forge, bake bread or tan leather. During the course of the visit to the village, the myths about the Vikings are shattered one by one. It turns out, for example, that Vikings never wore helmets with horns. Or that many Vikings were not professional warriors, but just ordinary peasants who went camping once or twice in their lives to earn extra money. The museum regularly hosts reenactor festivals and educational events. The main event of the year is the Viking Market, which takes place this upcoming season from June 30 to July 2. More than 500 artisans come to the festival each year to display their wares at the bazaar and take part in numerous activities. The centerpiece of the festival is a reenactment of that very battle of Foteviken with enthusiasts from around the world. 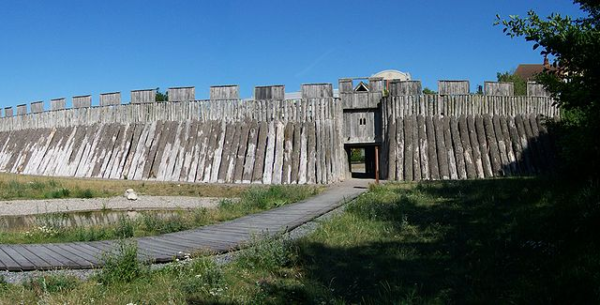 Trelleborg is one of the six Danish circular castles “Trelleborg” of the Viking Age, traces of which have survived on the territory of Denmark and southern Sweden. Traces of the ancient fortress of Trelleborgen, presumably built in the 980s by order of King Harald the Blue-toothed, were found in 1988 in what is now the city of Trelleborg. The fortress you can see now is a reconstruction based on archaeological excavations and research into the craft traditions of the time. Next to the reconstructed fortress is a museum and research center. At first glance, Trelleborgen does not look much like a fortress – it is rather a military camp of a perfect circular shape, surrounded by a high rampart. The circle was divided into four equal parts by two perpendicular streets, along which the so-called “long houses” were located. Today, one “long house” has been reconstructed in the Trelleborgen Museum. In the center of the house is the hearth by which the Vikings gathered, on either side of the hearth is the household area and the bedrooms. Such houses can be found all along the Baltic coast. It is believed that military forts such as Trelleborgen were described in The Saga of Jomsborg, which recounted the life of the glorious Viking warriors and their male brotherhood. According to the legend, these bases were inhabited only by men between the ages of 18 and 50, who trained and regularly went on campaigns, and on their return they divided all their booty equally. Some of this beautiful legend has already been disproved by scientists – it has been proven, for example, that not only men but also women lived in all Trelleborgen-type fortifications. 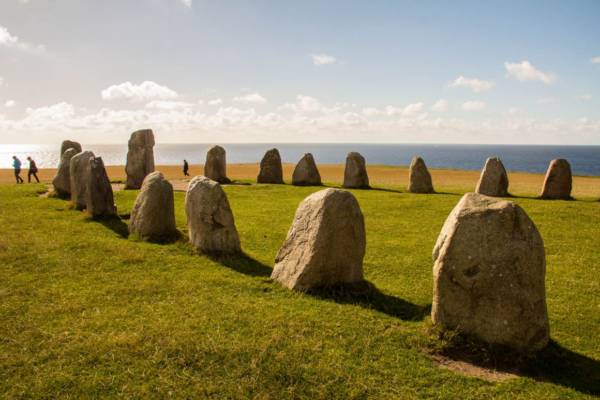 Ales Stenar stones, sometimes called the “Swedish Stonehenge”, is a stone ship of 59 sandstone boulders located on the rocky shore of the Baltic Sea near the modern village of Koseberga. It is the largest stone ship in Sweden and is thought to have been here between the 5th and 10th centuries. Scientists are still unable to give a clear answer to the question about the function of the monument – whether it is an ancient burial ground, or a calendar or compass. How exactly these giant boulders, weighing up to five tons, were moved here also remains a mystery. The mystery, magic and beauty of this place attracts tens of thousands of tourists every year who enjoy wandering between the huge stones and watching the sunset over the Baltic Sea.

In the heart of Stockholm’s Old Town, the restaurant Aifur is styled as an inn of the 10th century. Guests sit down at tables carved into rough sides and eat from dishes that are exact replicas of those found on Viking sites. The restaurant’s menu is the result of 15 years of research into the life, culture and diet of the Vikings of the 18th-12th centuries. The dishes are cooked according to original recipes from the impressive list of products and spices that Vikings had at their disposal thanks to their numerous expeditions. For example, you can try King Björn of Birka’s favorite dish here – fillet of pikeperch with capers and butter, or pot roasted root vegetables with wheat and thyme as in the court of Harald the Blue Tooth.

READ
Metz, France - the city of the founder of the European Union 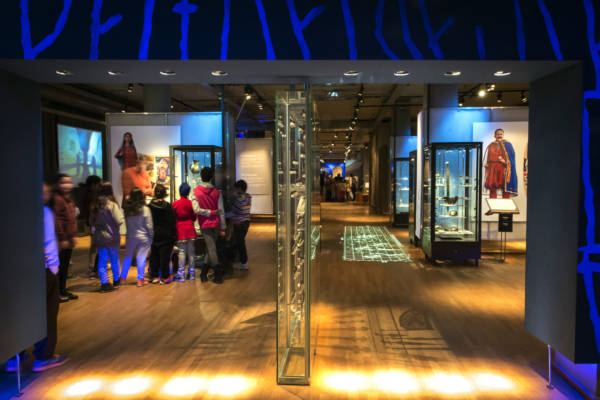 Historical Museum of Stockholm is a great place for those who are interested in the Vikings, but for one reason or another can’t drive through Sweden and see the sights. There is a large interactive exhibit with items and stories from all over the country. Perhaps the most famous room is the Golden Room, which has an incredible collection of jewels from ancient times to the 17th century. A favorite place for children of all ages is the clothing exhibit, which can not only be seen but also tried on. Children’s envy is also aroused by another exhibit: a fantastically accurate model of a Viking village, which recreates the smallest details of everyday life in that era. Since the beginning of 2016, admission to the History Museum has been free. 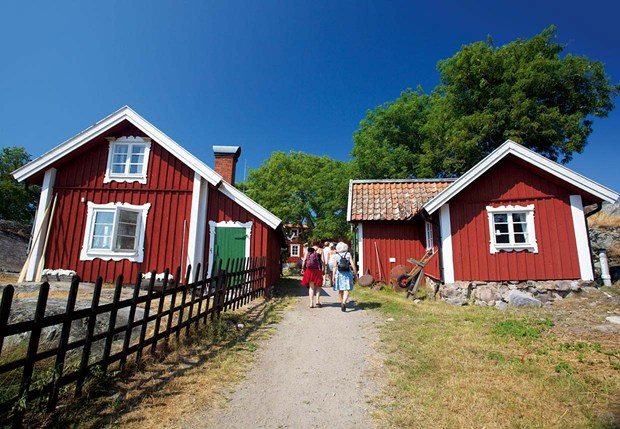 The city of Birka, the first city in Sweden and the most important trading post of the Vikings in the 8th and 10th centuries, a UNESCO World Heritage Site, is located 30 km from Stockholm on the island of Björkö. Despite the fact that it is mentioned in a variety of medieval sources, archaeologists were able to find its location only at the end of the 19th century. One of the reasons why Birka could not be found is that it was abandoned by its inhabitants in the 10th century for reasons unknown. During the excavations conducted there, scientists found objects that allow us to make our idea of the life and work of the Vikings much more complete. The easiest and most pleasant way to get to Birka is by boat Strömma, which during the season departs several times a day from the center of Stockholm. On the island, visitors are greeted by staff dressed in Viking costumes, who will lead you through the restored streets, tell you amazing stories and help you feel the atmosphere of that time. 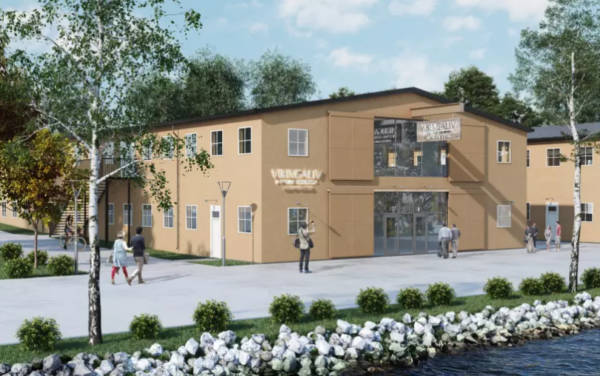 In April 2017, a new multimedia museum Vikingaliv will open in Stockholm, dedicated entirely to the history of the Vikings in Sweden. The museum will consist of two main parts – a 3D attraction that tells the story of a single family from the X century, and a historical exhibit based on the results of recent research and archaeological excavations. The museum will operate a store with souvenirs and a cafe, where you can try out the food and drinks of the Vikings with restored recipes. 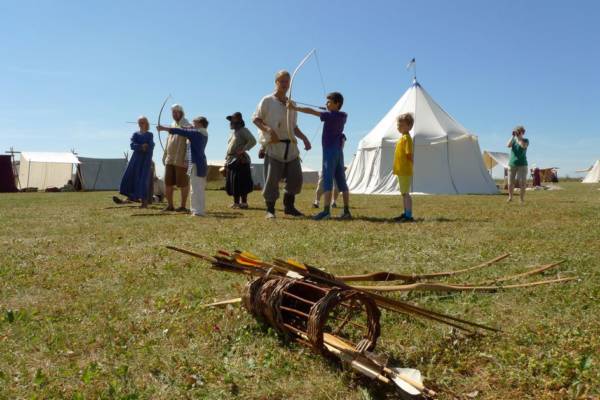 Viking Times Museum is an open-air archaeological museum dedicated to the Vikings, located on the site of the ancient homes of the Scandinavians. Today it fully recreates the life of the people: there are houses and craft workshops. Animals graze peacefully in the cattle pens and carrots grow in a vegetable garden. Guests can walk through this unique place with a tour accompanied by a professional archaeologist, who will show the ancient burial place of the Vikings. Tours are offered throughout the year, but the best time to visit is during the summer months, when the museum hosts entertaining events: historical lectures, fairs, craft workshops, and more. The museum is located near the village of Löddeköpinge, just north of the university town of Lund. 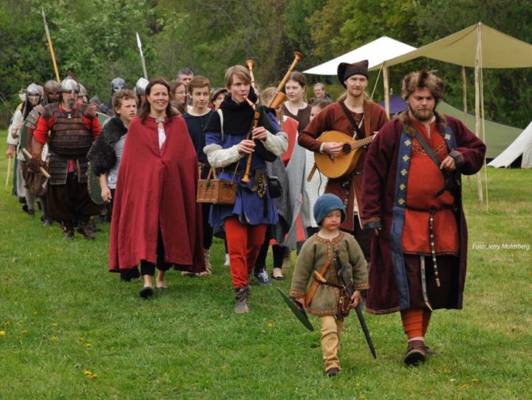 Runriket is a concentration of ancient Viking rune stones around Lake Vallentunasjön, 30 km north of Stockholm. It is the densest cluster of runic stones in the world. The 35-kilometer route around the lake is conditionally divided into 9 points, each of which is equipped with information boards in English and Swedish. Here you can see the first Christian runic stones of the XI century, the stones confirming the fact of land inheritance and other interesting artifacts. 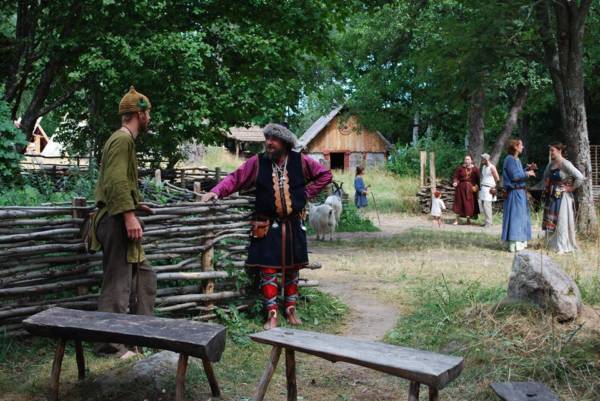 Viking Village Storholmen is an open-air archaeological museum, located 80 kilometers from Stockholm. In the summer, during the season, you can see the life of the Vikings and learn traditional crafts. The village hosts a festival for families with children (July 2017), and the Viking Day for Children is held on August 28.