According to the Gospels, Bethlehem is the holy city for Christians, second most important after Jerusalem. Bethlehem is where David was born and anointed for kingship.

Save on a trip to Bethlehem!

One of the oldest cities on earth, Bethlehem was founded in the land of Canaan in the 17th and 16th centuries BC. At one time the city was inhabited by Canaanites and Jews, and later it was taken over by the pagan Romans. There was also a period of Muslim domination, which displeased Pope Urban II and made him launch a crusade to liberate the Holy Land, after which Bethlehem became part of the Kingdom of Jerusalem, which lasted till 1291.

Since 1517. From 1517 Bethlehem was part of the Ottoman Empire until 1995 when it came under the control of the Palestinian Authority.

How to Get there

Most visitors arrive in Bethlehem by way of Jerusalem. There is a checkpoint on the road linking the two towns. Tourists can cross the border as many times as they want without any restriction, as long as they make sure that they have the appropriate visas in their passport.

A bus service runs from Damascus Gate in East Jerusalem to Bethlehem without stopping at the border crossing (the cost is 7 NIS, travel time about 30 minutes). There are mini buses to and from the Damascus Gate to the border point (5 shekels). The cost is given for April 2011.

Bethlehem has a Mediterranean climate with hot and dry summers and cold winters. The coldest month is January, when temperatures range from 1 to 13 degrees. From May to September the weather is usually sunny and warm. The hottest month is August, when the thermometer rises above 27 degrees.

It is safer to travel around the city by cab. For example, a trip from the border crossing to the Basilica of the Nativity costs 20 shekels.

There are three bus terminals in Bethlehem, where private transportation companies are based, which operate flights to Beit Jala, Beit Sahour, Hebron and other cities of the Palestinian Authority. There are two cab stands which take you to Beit Sahour, Beit Jala, Jerusalem and the Herodion Citadel.

On Christmas Eve, there are numerous markets in the main streets where you can buy handicrafts, Middle Eastern spices, jewelry, and oriental sweets such as baklava.

The Abu Shanab restaurant specializes in Israeli cuisine – juicy lamb, traditional kebab and kofta (chopped cutlets). Bethlehem has its own producer of local wines – Cremisan Wine Company, founded in 1885. The wines are made by Salesian monks in the Cremisan monastery and the grapes are harvested in the Al-Khader region. The volume of wine produced is about 700 thousand liters per year.

Entertainment, sightseeing and attractions of Bethlehem

The second most important shrine in Bethlehem is the tomb of Rachel, wife of Jacob and mother of Joseph and Benjamin. The tomb is a place of pilgrimage and is holy to all three religions.

Of interest is the Milk Cave, which is completely white. Legend has it that the cave became white from a few drops of milk spilled by Mary while feeding Jesus. Powder scraped from the walls of the chapel is sold there as a fertility booster.

Modern art has also left its traces in Bethlehem. Namely on the wall separating the city from Jerusalem, the mysterious Englishman Banksy left his graffiti. Just 5 km southwest of Bethlehem in a beautiful pine forest in the Artas Valley are the Solomon Pools – three open stone cisterns holding 160,000 cubic meters of water. Over the centuries these basins have played a significant role in the water supply of the area.

5 km southeast of Bethlehem in Israel is the ancient fortress of Herodium. It is the only structure in the world that bears the name of Herod the Great, the founder of the Idumean dynasty of Herodias, and is believed to be his burial place. This fortress was erected between 23-20 BC on a volcano-like mound.

Since Bethlehem belongs to the Palestinian Authority, the holidays of the saints and prophets belonging to Palestinian folklore are celebrated here every year. For example, on May 5-6, Bethlehem welcomes the Feast of St. George (al-Hadra), and the Feast of St. Elias is marked by a procession to Mar Elias, a Greek Orthodox monastery north of Bethlehem. 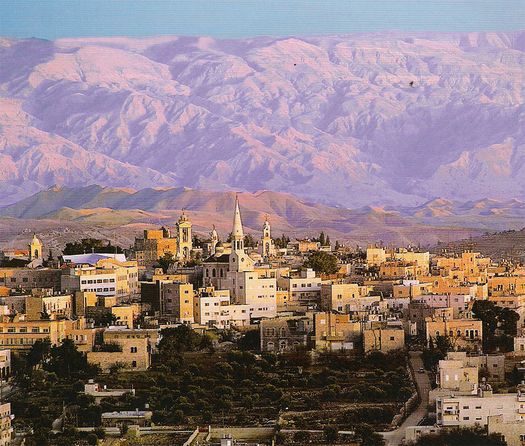 Bethlehem (Heb. בֵּית לֶחֶם, Beit Lechem, lit. House of Bread, Arabic. بيت لحم, Bayt Lahm, lit. House of Meat) – City in the West Bank, under the control of the Palestinian National Authority (Area A), capital of the Palestinian Province of Bethlehem, in the historical region of Judea; center of pilgrimage and tourism. Located about 8 km south of the center of Jerusalem and now actually borders it. Population 24,949 (2007), area 5.4 km².

Bethlehem is a sacred city for Christians, second in importance after Jerusalem, because here, according to the Gospel (Luke 2:4-7, Matthew 2:1-11), Jesus Christ was born. The city is home to one of the oldest Christian communities in the world, although in recent years its numbers have declined due to emigration.

Here, according to the Bible, King David was born and anointed for kingship.

Bethlehem is best known for being the town where, according to the Gospels, the birth of Jesus Christ took place. The wise men saw a star over the city and came to worship the future King, bringing gifts of gold, frankincense, and smyrna. But after King Herod gave orders to kill all the male children, the Holy Family left Bethlehem and fled to Egypt.

In the late 1940s, during the formation of the Jewish and Arab states, the residents of Bethlehem were mostly Christian Arabs (85-90%), but in the second half of the 20th century there was a mass emigration of Christians from Palestine and the Middle East in general to Western Europe and America. In 2001, the percentage of Christians among the residents of Bethlehem, according to various estimates, was 15-20%.

According to local law, the mayor of Bethlehem must be a Christian.

At the birthplace of Jesus Christ is the Church of the Nativity, which belongs to the Jerusalem Orthodox Church.

A five-minute walk from the Church of the Nativity is the site of the Russian Spiritual Mission with a comfortable residence for pilgrims.

Church of the Nativity (Bethlehem) [ edit ] 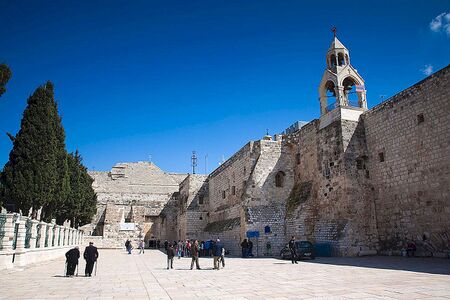 The Church of the Nativity is a Christian church in Bethlehem, built, according to tradition, over the birthplace of Jesus Christ. Along with the Church of the Holy Sepulchre, it is one of the two main Christian temples of the Holy Land. The church is jointly administered by the Jerusalem Orthodox Church, the Armenian Apostolic Church and the Roman Catholic Church.

It is one of the oldest continuously operating churches in the world. The first church above the Nativity Cave was built in the 330s by order of Emperor Constantine the Great. Its consecration took place on May 31, 339 and since then the services have been practically uninterrupted. The modern basilica of VI-VII centuries. – It is the only Christian church in Palestine preserved intact from the pre-Muslim period.

On June 29, 2012 at the 36th session of the UNESCO World Heritage Committee, held in Saint Petersburg, the Basilica was inscribed on the World Heritage List.

Directions: Take the Hebron Road in Jerusalem to the south exit of the city through the checkpoint-300 Then go straight ahead and turn left at the fork. From Jerusalem take bus 124 of the Arab Bus Company from Shechem (Damascus, Nablus) Gate (Sha’ar Shechem, Bab el-Amud).

In light of the emerging stability and future settlement of the Palestinian situation, the Russian Orthodox Church opens the Pilgrim House in Bethlehem, expressing hope for the continued peaceful coexistence of the people of the Holy Land.

The Pilgrim House in Bethlehem is located 200 meters from the great Christian shrine – the Church of the Nativity. Due to this location guests have the opportunity every morning to pray the Divine Liturgy in the cave where the Lord Jesus Christ was born.

The hotel creates all necessary conditions for each pilgrim visiting the Holy Land, feel the hospitality of the Holy City of Bethlehem and keep the joy of Christmas in his heart for a long time.

The hotel was built in 2000 with the blessing of His Holiness Patriarch Alexy II of Moscow and All Russia.

Accommodation in the Pilgrim House in Bethlehem is provided through the Pilgrimage Service of the Russian Spiritual Mission. 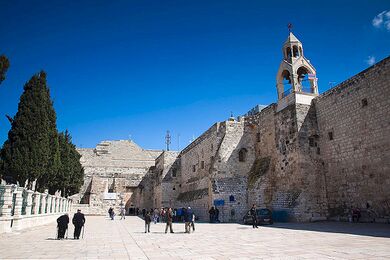 Church of the Nativity of Christ. 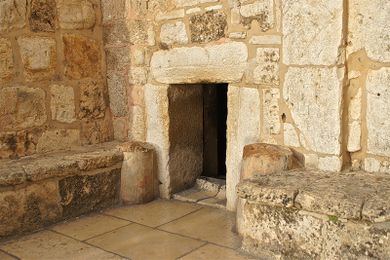