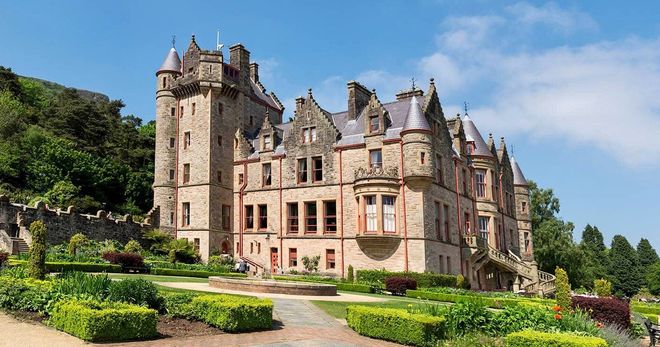 When traveling in Great Britain, you can often find ancient, dilapidated castles and fortresses standing on the hills in the middle of the heath. But not all examples of medieval architecture are in a sorry state. You can see it in Belfast Castle, a castle complex built in the capital of Northern Ireland in 1870. Despite the fact that more than 200 years passed since its construction it still impresses by its refinement and well-maintained appearance.

Before the beginning of the 17th century this part of the capital was a castle complex built by the Normans at the end of the 12th century. In 1611 a new fortress in stone and wood was built on its place. It stood there less than a hundred years, as in 1708 it burnt down completely. The history of Belfast Castle is closely connected with the name of its first owner. He was Baron Arthur Chichester. It was he who initiated the construction of the new mansion on the place of the burnt residence. However, the works were carried out under the supervision of the Marquis of Donoghul, the second owner of the castle. They were completed in 1870, when the Earl of Shaftesbury owned the manor. He acquired the mansion after the death of the marquis.

Until 1934, the Earl of Sheftsbury’s son lived at Belfast Castle. It was he who donated the family mansion to the municipality. In 1978, the City Council decided to overhaul the structure. The renovation was supervised by the architects Heslam and Hewitt and cost almost $2.5 million over a period of 10 years. Belfast Castle has been open to the public since November 1988. 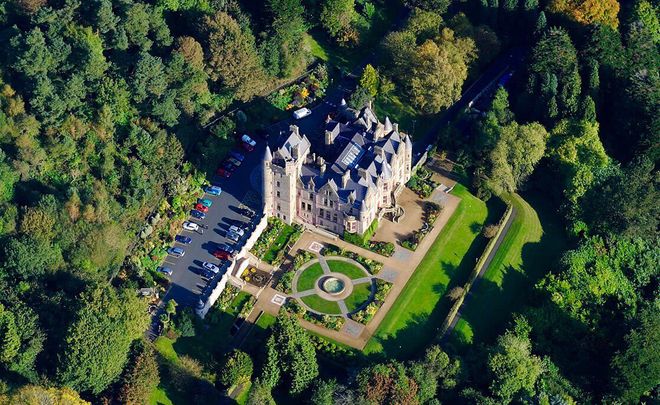 When designing Belfast Castle, the architect used the style of Scottish barons. Around the structure, he laid out a classic English garden with a fountain right in the center. In every corner of the garden you can find a picture of cats. According to legend, the white cat is the patroness of the Donegol family. Its images in the English garden are believed to bring the owners and residents of the Marquis residence good luck.

READ
The city of Matera - a place for seclusion in Italy

Belfast Castle is built on a hill at an altitude of 120 m above sea level. From here you have a picturesque view of the capital and its hilly surroundings. It is believed that these beautiful landscapes inspired Jonathan Swift, who once vacationed here, to write his world-famous work “Gulliver’s Travels. While visiting Belfast Castle, tourists can not only admire the panoramic views of the city. They can also:

Belfast Castle is equipped for people with disabilities. For children there is a playground. Inside the building you can rent out beautiful rooms for conferences, concerts, private parties, weddings and banquets. 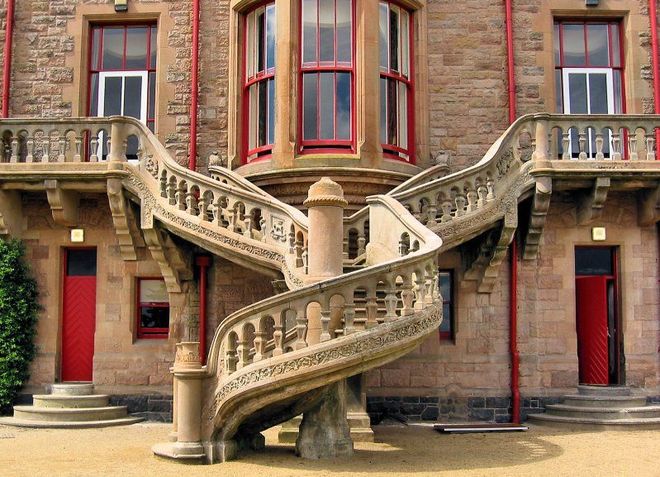 The ancient castle is located in the northern part of Belfast in the Cave Hill Country Park, about 8 km from the center. It can be reached by public transport or cab. From the Europa Buscentre central bus station, there are buses #215, 512, 538 and 551. It takes 30-35 minutes to get to the Gray’s Lane stop, from where it’s a 15-minute walk.

If you go from the capital center to Belfast Castle directly by car, it will take 15 minutes. The fastest route is via the M2 road.

To those who live, enjoy life here (H.J. Caesar)

Belfast Castle – a symbol of love and loyalty 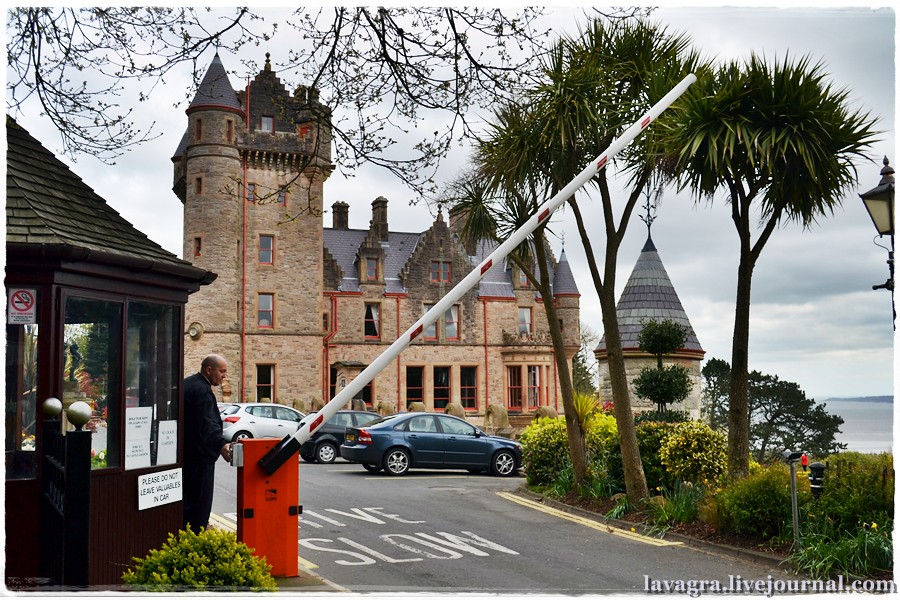 After my post about Belfast, many people asked me, “Is it safe in the capital city of Northern Ireland?” I can confidently say that if you’re not personally going to get involved in the local Protestant and Catholic squabbles, there’s no more danger in traveling in Belfast, and the rest of Northern Ireland, than in a science lesson. And there are plenty of wonderful places, castles and museums to visit. One of the places I would call Belfast Castle a must-see.

READ
10 popular places to go on a honeymoon trip

Built only a little more than 140 years ago, this castle can hardly be called an important historical or architectural monument. But thanks to its picturesque location and its special romantic mood, it captures the soul. Cave Hill, overlooking the whole of Belfast, has long fascinated man. Structures dating back several millennia are preserved here. And the local caves have more than once saved the local population from outside threats. During the Second World War bombings, quite a few people in Belfast hid out here. The first wooden fortress here dates back to Norman times. The building of those times now can be seen only as a model in the Castle Museum (admission to which, by the way, is free). Only English settlers began to seriously strengthen this strategically important place. Unfortunately, the first stone fortress was completely destroyed by fire, standing a little more than a hundred years after its construction. Only the name of the street “The place where the castle stood” has been preserved from the structure of that time. Only at the end of the century before last, the Donnegan family, distinguished in the town, decided to build a modern red sandstone castle to serve as a country residence for hunting. This construction so depleted the Donegans’ finances that the castle soon passed into the ownership of the Shaftesberry family. It was they who donated Belfast Castle shortly before the war in 1934 to the city and all its inhabitants. While still in the possession of the Donegalls a remarkable staircase in the Italian style was added to the castle. Such was the young Donegall’s gift to his mother. This staircase, perhaps, does not go quite with the general austere features of the castle, but nevertheless, it successfully brightens up the overall view. The six-story castle building and the beautiful park are now maintained by the many weddings and receptions. From here you have a beautiful view of Belfast Bay and the city’s port. In addition, there is an antique gift shop and a small restaurant in the semi-basement of the castle. As you might expect, the main theme in the castle store is now souvenirs of the Titanic. Another obsessive theme at Belfast Castle is cats. Their figures are everywhere here – in the form of elegantly carved bushes, on the mosaic floor, in the relief of the lattices of benches. Of course, somewhere in the castle chambers lives a real live white cat. The local legend associates his presence in the castle with good luck and happiness in family life. I was personally struck by another true story that I heard during a tour of the castle museum. In July 1944 an American Boeing B-17 bomber crashed near the castle. All 10 of its crew perished along with the plane. The crash site was visited by many locals and visitors to the city. The fate of a certain Alfie Montgomery, who in 1993 discovered here a gold wedding ring engraved on the inside “Ruth-Larry 10-21-1993”, is all the more astonishing. This Belfast resident was not too lazy to find out who owned the ring and whether there were any surviving relatives of its owner. The search took almost two years and, again a happy coincidence, Alfie learned that the widow of the dead bomber pilot Larry Dendon, Mrs. Rufe, still lives in the American town of Louisville, Kentucky. The ring was returned to the widow after more than 50 years and now every year in Louisville they celebrate Alfie Montgomery Day.

READ
5 things to do in Dortmund, Germany 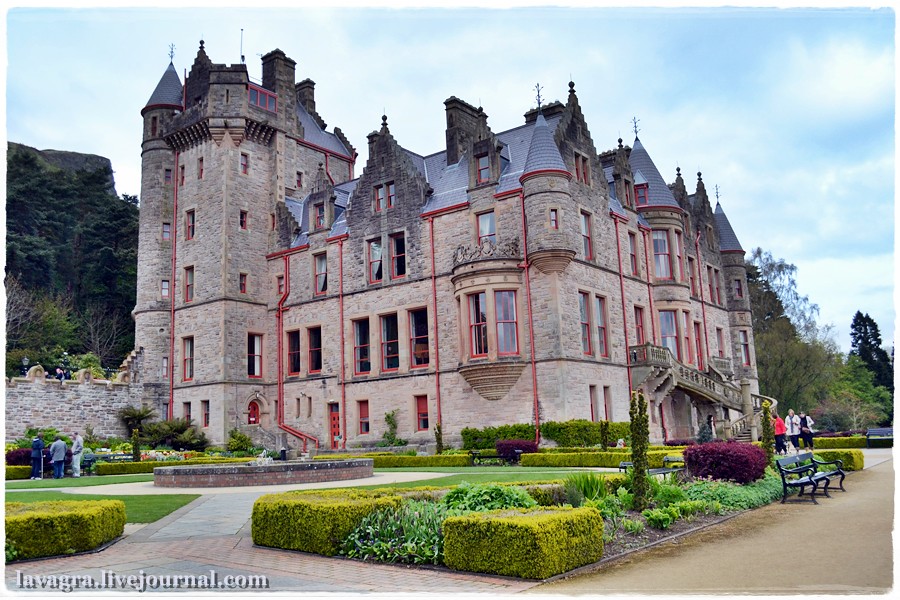